This season’s first Basque derby in La Liga was arranged in the 12th week, which Real Sociedad took on Athletic Club at the Reale Arena. Despite conceding a late goal against a 10-man Los Leones, Imanol Alguacil was quite pleased about the performance of his team.

This tactical analysis will look at the key tactics of both sides in this game, especially focusing on Los Txuri-Urdin’s dynamic positional structure.

Diego Rico, the new signing of Sociedad, made his first start for the team. Without Mikel Oyarzabal, the former Manchester United winger, Adnan Januzaj played on the left side and switched his position with Alexander Isak later. It was a 4-2-3-1 on paper, with David Silva as the attacking midfielder to support Alexander Sørloth.

Athletic Club’s manager, Marcelino, has been consistent to use a 4-4-2 formation. A few changes were made as Álex Berenguer, Raúl García, Dani García, Íñigo Martínez returned to the starting lineup.

Alguacil is a very flexible coach who has good ideas to adapt in different situations. Against Atletico Madrid, he smartly instructed his side to play in a back four in the first five minutes, then, shifted to a planned back three to disguise the oppositions. In the derby, his team continued using fluid structures to construct the attacks. 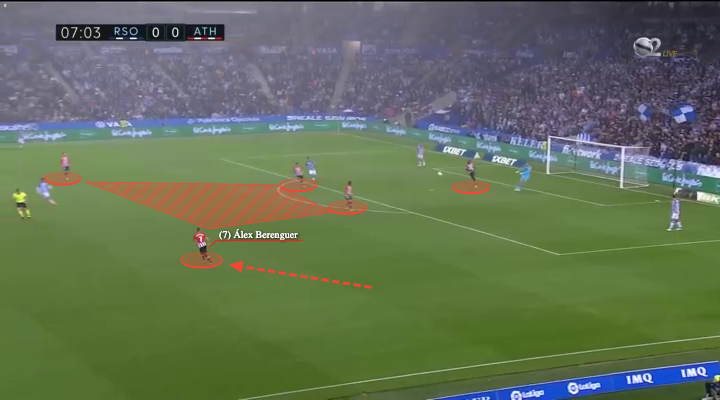 Firstly, we briefly introduce the defensive structure of Marcelino’s side. Despite the formation was a 4-4-2 on paper, it was not rigid as the shape would become a 4-1-3-2 when the team pressed high. By keeping one of the midfielders deep in front of the centre-backs, they tried to close spaces behind the midfield.

Another emphasis of the defence was the central domination. As shown in the above image, Athletic Club also wanted to close spaces in the centre by numbers, such as the right-winger, Berenguer, must go inside initially. This would force Sociedad to go sideways. 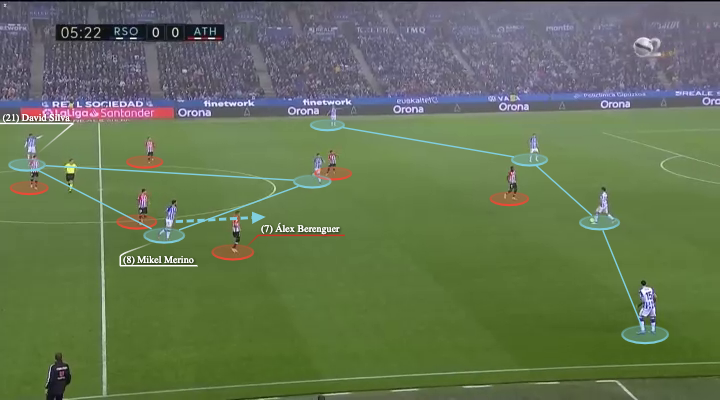 But Alguacil’s troops were well-drilled and well-prepared against the press. They will use a 4-1-2-3 shape in the build-up, with advanced midfielders dropping to create decisional dilemmas for the oppositions. Martín Zubimendi will be the holding midfielder in front of the first line.

In the image above, you could see how Sociedad interacted with the 4-1-3-2 defensive shape. With Mikel Merino intentionally dropping alongside Zubimendi, the movement would drag a midfielder out or draw the right-winger inner. Then, the deep Sociedad full-backs could receive with more spaces as the oppositions moved into the centre. 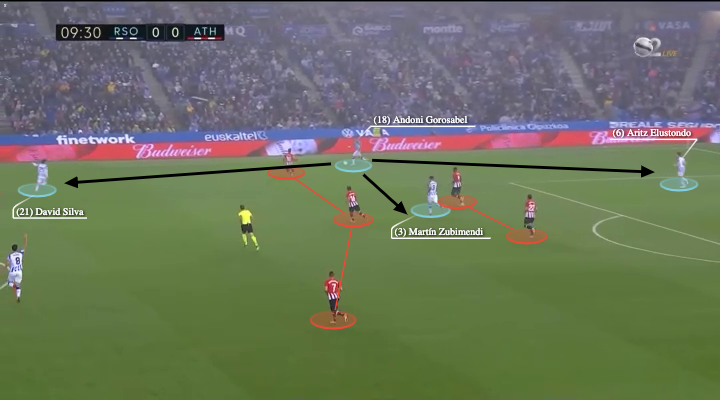 Their 4-1-2-3 shape successfully stretched the opposition shape vertically as the high front three always push the last line deeper. Therefore, even the ball went sideways, the players had enough space to play through the lines and create multiple options for the full-backs.

In the above situation, Andoni Gorosabel received on the right side, and there were three passing options. Firstly, a return pass to Aritz Elustondo who offered the offensive depth; secondly, Zubimendi who proactive moved between the lines to receive in spaces between oppositions; or, the best should be Silva, who appeared behind the 3-2 press. If you reached the former Manchester City man, you broke two lines. 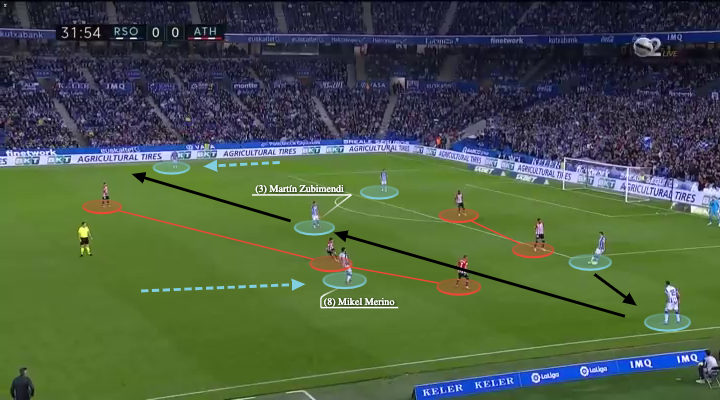 Another advantage to drop Merino deeper was to create a numerical overload in the build-up. In a 4-4-2, if the wingers did not come inside to shut that space, Sociedad’s 4-1-2-3/4-2-3-1 could enjoy a 3v2 numerical superiority in the centre. That’s why Alguacil played with a pair of wide full-backs, he wanted to drag the press and winger out wide, opening spaces in the centre.

In the above image, Sociedad comfortably circulated the ball from centre-back to left-back, which invited Berenguer to press. Then, when Merino dropped, he absorbed the midfielder in the press, so Zubimendi became the free player to receive in the centre. Sociedad were good at going from side to side and go out from the weaker flank. 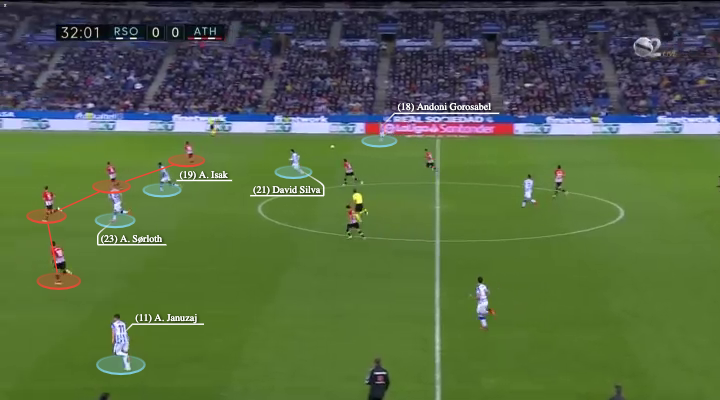 Now, you can see why the other midfielder could not join the press as Silva was high to fix his position. Sociedad were flying high on the right flank, with a 4v4 in the centre. The job of the attacking three was to keep searching for the attacking depth to push the last line. 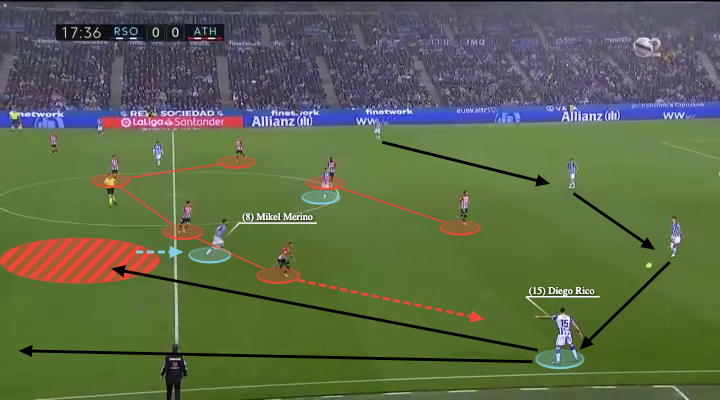 Sociedad’s dynamic movements of players could also open spaces to allow players counter-act. The above image is an example, the hosts were circulating the ball from the right to left and the oppositions pressed in a 4-4-2. Again, Merino dropped a bit deeper to drag the midfielder out, and fix the right-winger in the same space.

Then, there were controllable elements, as Sociedad knew their full-backs will be pressed diagonally from the inside, and their stronger foot had more time to play the forward pass. You could tell from Berenguer’s press on Rico above.

The drop of Merino also created different options for Rico. In this game, Sociedad mainly focused on going behind with wingers attacking the last line, but the half-spaces were also opened (zone red) as the Athletic Club midfielders were dragged away. That’s why they tried both wrong-footed wingers and wingers with correct foot in this game. 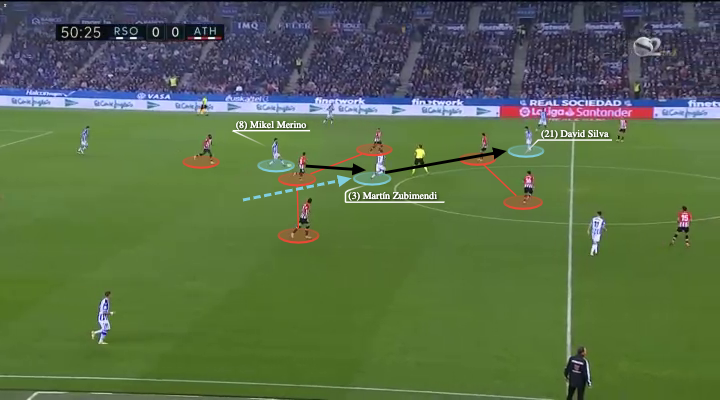 If Sociedad were moving the ball forward from the centre, their midfield distribution must be appreciated. The midfield trio were great at coordinating with each other, especially in exploiting the spaces between the lines. Their awareness to spread in different horizontal zones of the pitch was great, and thus a more staggered structure was created to create more angles of support.

The above example is typical. Initially, Merino dropped in front of the centre-backs to receive, and Zubimendi read this as chance to move into spaces between the second and third line. From there, he could connect the midfielders and break another line by reaching Silva. The former City man’s positioning was great too, as he was behind the midfield line to offer progression when there were spaces to turn. 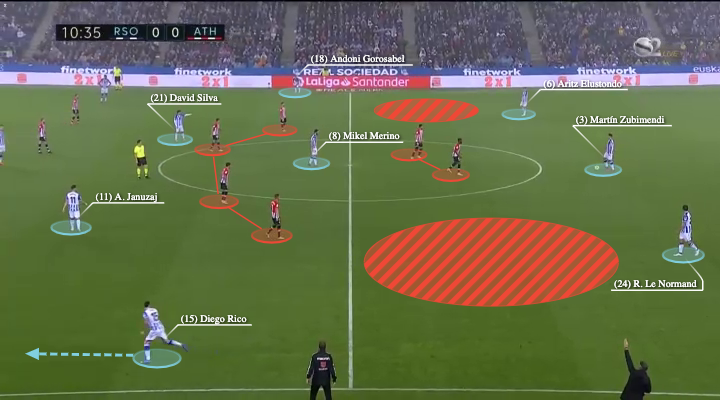 Another shape of Sociedad was a back three, they used it more often in the second phase of the attack by dropping Zubimendi between the centre-backs. It is a 3-1-2 shape in the centre with a pair of wide wing-backs, then, moving Adnan Januzaj into the centre to manipulate the second line with Silva. The strikers such as Sørloth and Isak still needed to occupy higher spaces to push the last line.

The advantages over a 4-4-2 were clear too. In the first line, there was a 3v2 numerical advantage and they should free at least one of the half-spaces (red spaces). To fix the position of strikers and create a midfield 3v2 overload, Merino, would stay between the first and second line. As they also had half-spaces occupation (Silva and Januzaj), the Athletic Club wingers would want to stay inner to shut the channel, so wing-backs would be free in the wide spaces.

Unlike Sociedad’s careful positional structure, Marcelino’s side were a bit direct and their wingers had alternative roles in a 4-4-2. 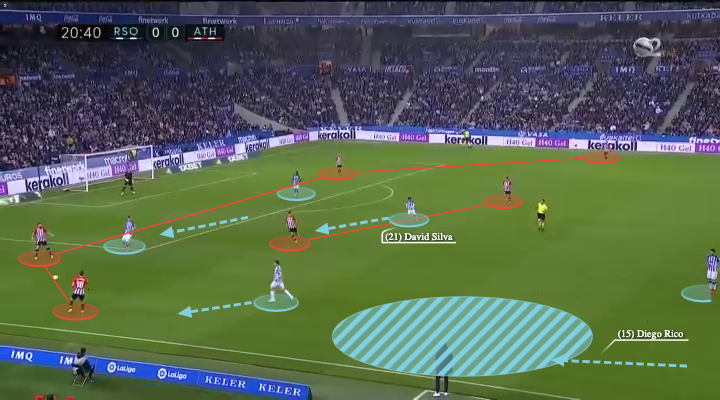 The Sociedad pressing was quite good in the derby, they gave the oppositions limited spaces to play short passes, forcing them to go long. Alguacil’s men would try to dominate the central zones with numbers, inviting the opponent to pass sideways and press them on one flank.’

Here, in the above image, Sociedad pressed in that way. When the striker and the far side winger closed the centre-backs, Athletic Club moved the ball to the right flank, so Januzaj could jump onto the right-back. Silva, as the attacking midfielder, must shuffle from covering one central midfielder to the other, so they made sure the options around the ball were closed.

If the opponents went behind the winger (Januzaj), or the winger dropped into blue space, Rico must cover. If they entered the midfield, Sociedad still had Merino and Zubimendi to stop them. 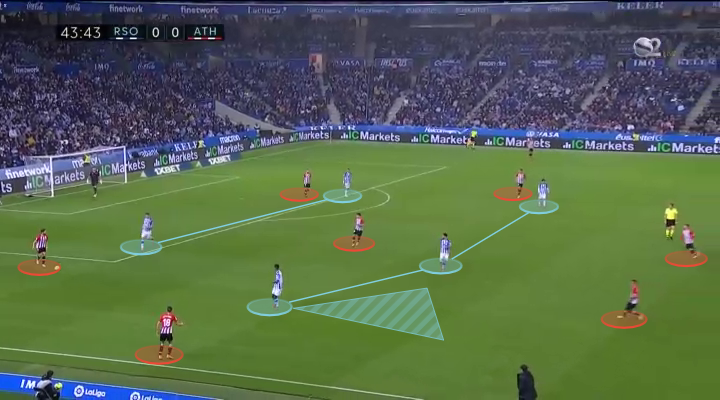 This was an alternative Sociedad pressing shape, similar to their oppositions, it was also a 4-1-3-2. The setups were very similar, but they controlled the deep players better as the midfield were more man-oriented (2v2).

However, the problem would be the spacing behind the second line, as only Zubimendi was there. Marcelino was clever to free Iker Muniain into the centre to give an additional number in that area. We will see more in the next example. 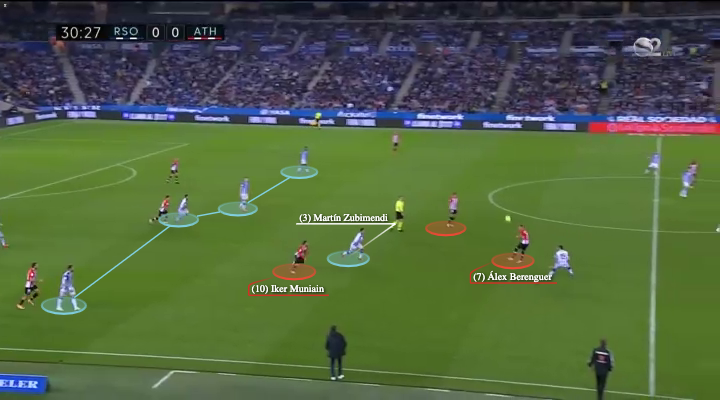 Here shows the attacking structure of Athletic Club above. Usually, Berenguer was closer to the strikers, and he would serve as the long ball target. On the other hand, Muniain would get into the centre to connect teammates. With these setups, they dominated spaces around Zubimendi. A simple long ball would bypass the press and as Muniain attracted the holding midfielder, spaces were opened in the centre.

Marcelino’s men were also well prepared as they attacked the box in a smart way. They knew the Sociedad centre-backs have habits to drop back into the six-yard box against the crosses, and leaving spaces around the penalty spot were exposed. Therefore, they also place the crosses in those areas (blue spaces) in this game, with strikers meeting at the endpoint. From the above image, Iñaki Williams suddenly attacked the blue space, and exploited Robin Le Normand’s loose defending.

This analysis gives a brief look of the teams’ setups in the Basque derby. Sociedad had dominated possession, but they were unable to develop too many threats from their positional structure, mostly because of their lack of sharpness in the final third. Meanwhile, Athletic Club showed great spirit to achieve a point after being down to ten-man, and as Algucail concluded, it was a fair draw.