Ajax is world-renowned for finding and producing some of the best talents in world football. Their famous academy partnered with shrewd recruitment allows them to have a never-ending conveyor belt of talent. This current Ajax side is no different with the likes of Jurrien Timber, Ryan Gravenberch and Antony all poised to become some of the world’s best in the near future. Another name to add to that list is the Argentinian centre-back Lisandro Martínez who is having an excellent season for both club and country. At 24-years-old he is slightly older but still has plenty of time to develop and doesn’t get the plaudits he deserves.

Ajax bought Martínez in 2019 for a small fee from Defensa, since then he has gone from strength to strength and is becoming one of the most sought-after centre-backs in the world with both Barcelona and Real Madrid reportedly keen on the defender.

This scout report and tactical analysis aim to unpick what it is about Martínez’s game that has these sides interested and has led to him having an excellent season in the Eredivisie.

Usually, I start by looking at a player’s heat map to help explain what type of player he is, however with a centre-back it’s less important and more straightforward. However, addressing the data is essential no matter where the player plays. Using data to evaluate defenders isn’t as easy as it is to evaluate more attacking players, as many of a defender’s qualities are hard to quantify however there are still metrics that help us understand a players strengths. Firstly, we will look at defensive duels per 90 and successful defensive actions per 90. Martínez is above average in both these metrics amongst Eredivisie central defenders. He records 6.6 defensive duels per 90 and 10.5 successful defensive actions per 90. 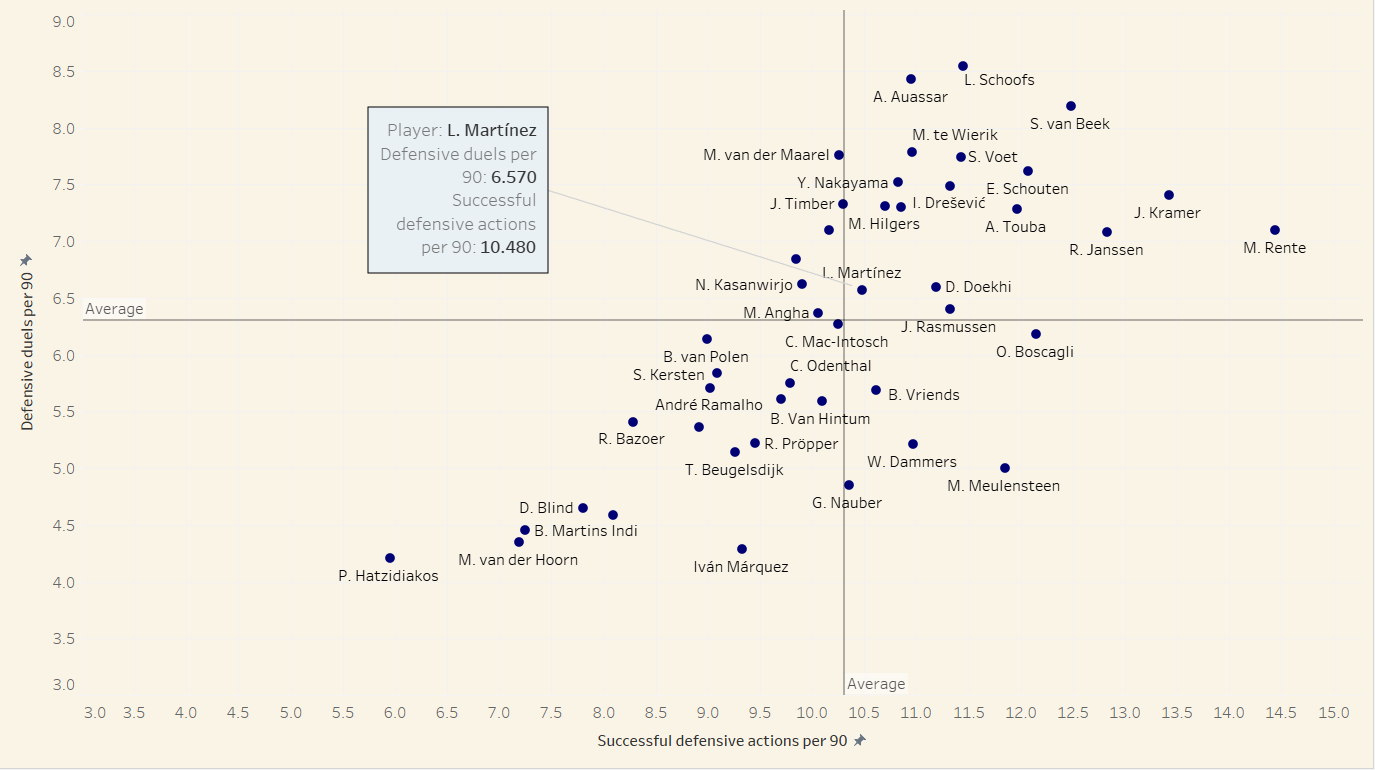 It is also worth contextualizing that these metrics can favour defenders on lower possession teams as they have more opportunity to engage in duels and defensive actions. Another set of metrics that can be used is PAdj interceptions and PAdj sliding tackles. PAdj means possession adjusted and measures a player’s performance in tackles and interceptions with the game possession at 50/50. This is to remove the bias these metrics would have towards defenders who play in low possession teams. Again, as you can see Martínez is above average in both these metrics. 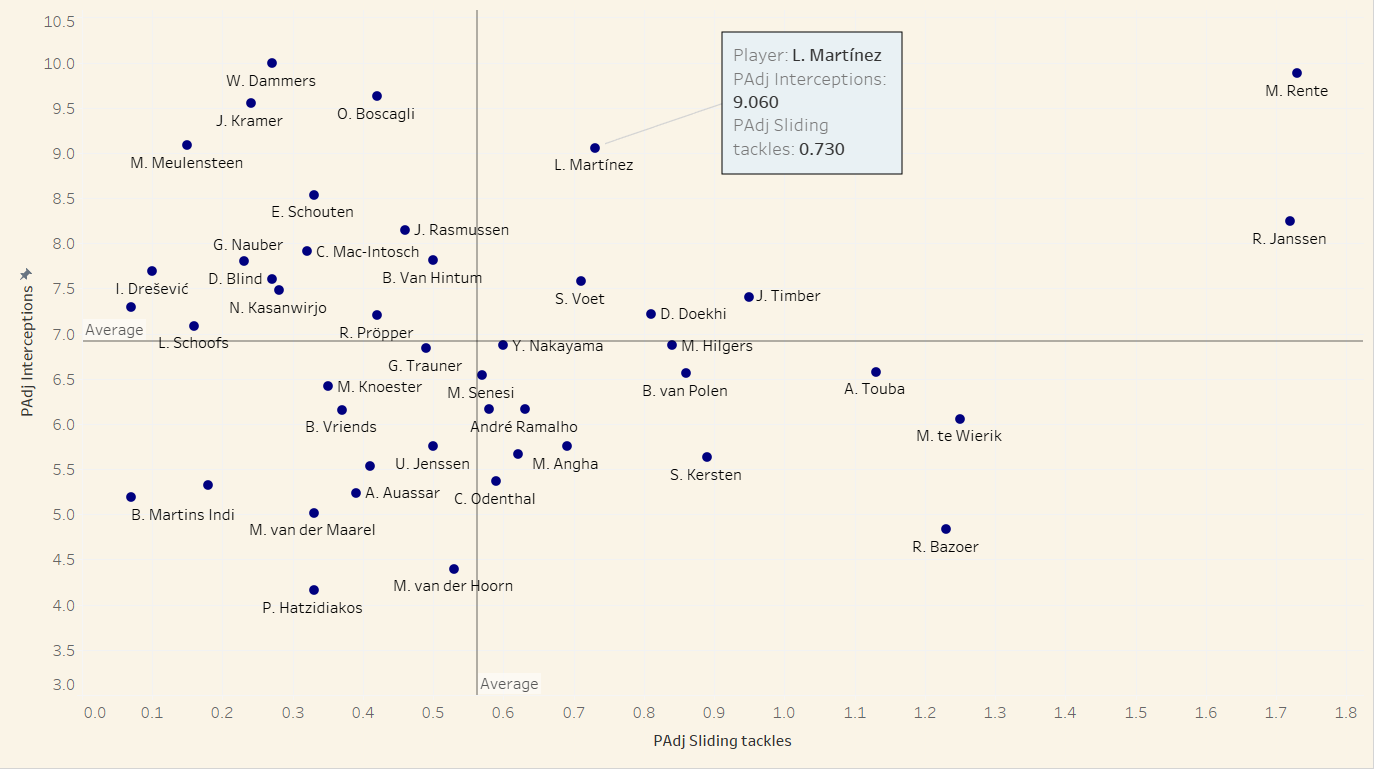 The final defensive aspect of Martínez’s game we will look at is his aerial ability. Although Martínez isn’t the biggest, he is strong in the air competing in 6 aerial duels per 90 and a success rate of 67%. He is again well above average in these metrics and one of the league’s best in the air. 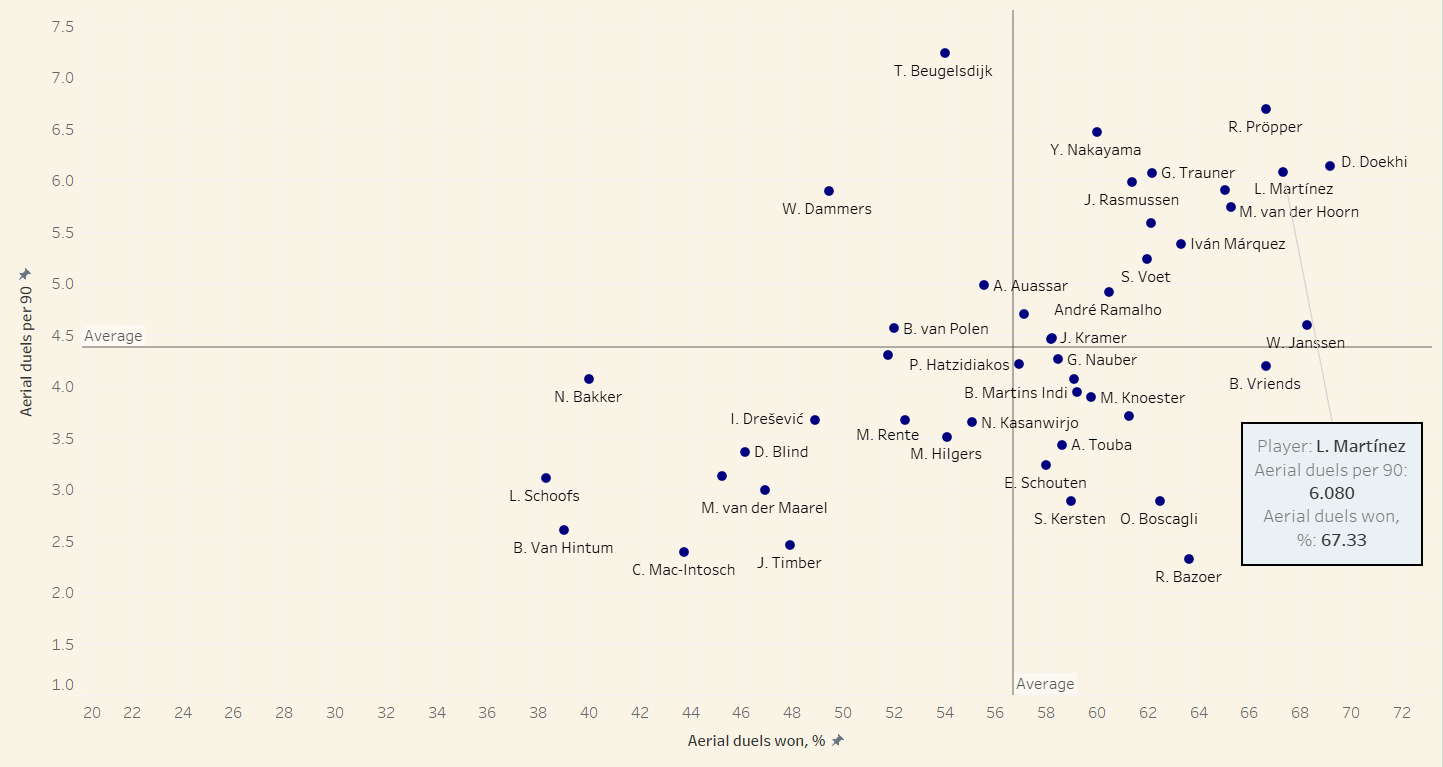 The six defensive metrics we have looked at show that Martínez is being able to regularly engage in defensive actions like interceptions but also be successful, making him an effective defender and one of Eredivisie’s best also.

When analysing defenders, you can no longer just look at their defensive performance you must consider their contribution with the ball. Ajax is a side that dominates possession and likes to build up from the back, requiring all their defenders to be good on the ball and able to progress the ball forward up the field. The below graph shows pass to the final third per 90 and progressive passes per 90. Martínez is the second-best in the Eredivisie in these metrics behind Daley Blind who has some incredible numbers. Showing Martínez excels on the ball, especially amongst Eredivisie centre backs. 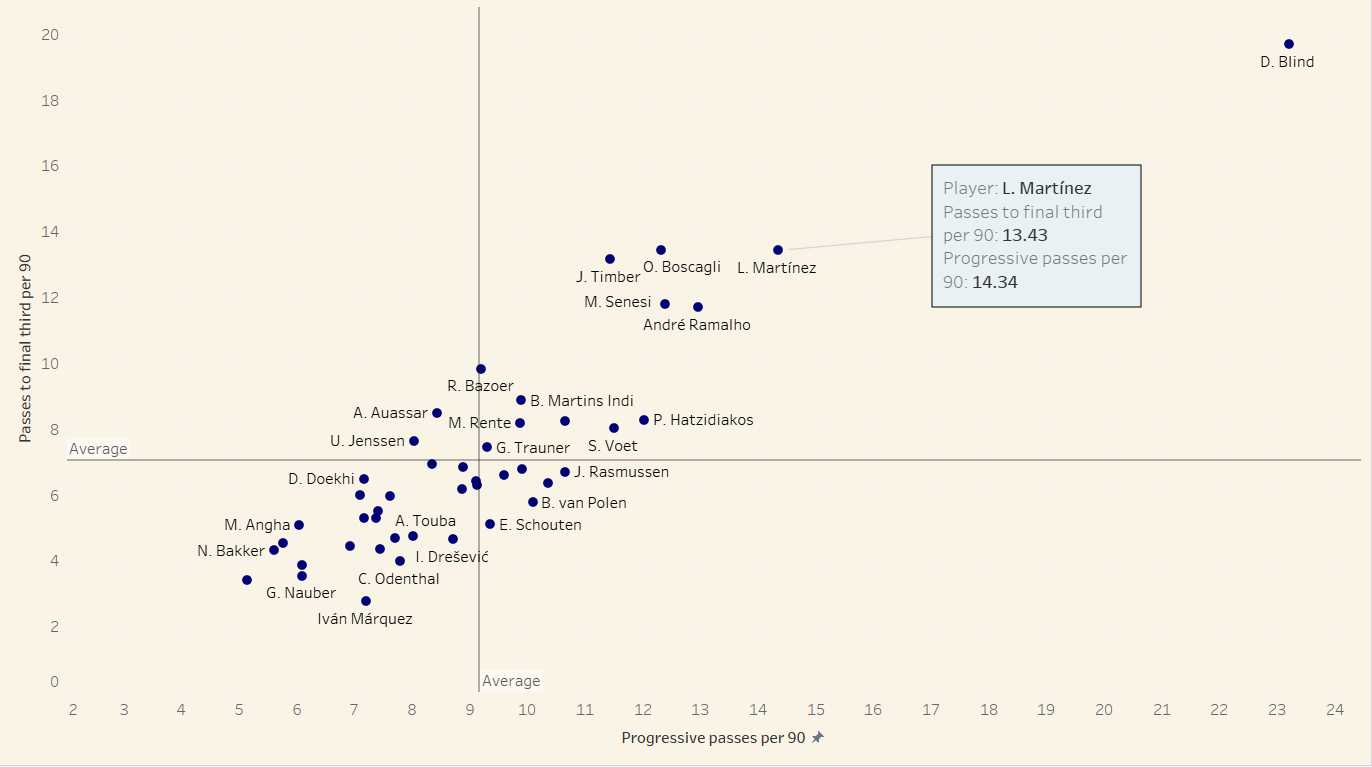 Finally, another way of assessing a defender on ball ability is by looking at the accuracy of their passes. As you see below Martínez is again well above average, this time with accurate forward passes but also accurate long passes. 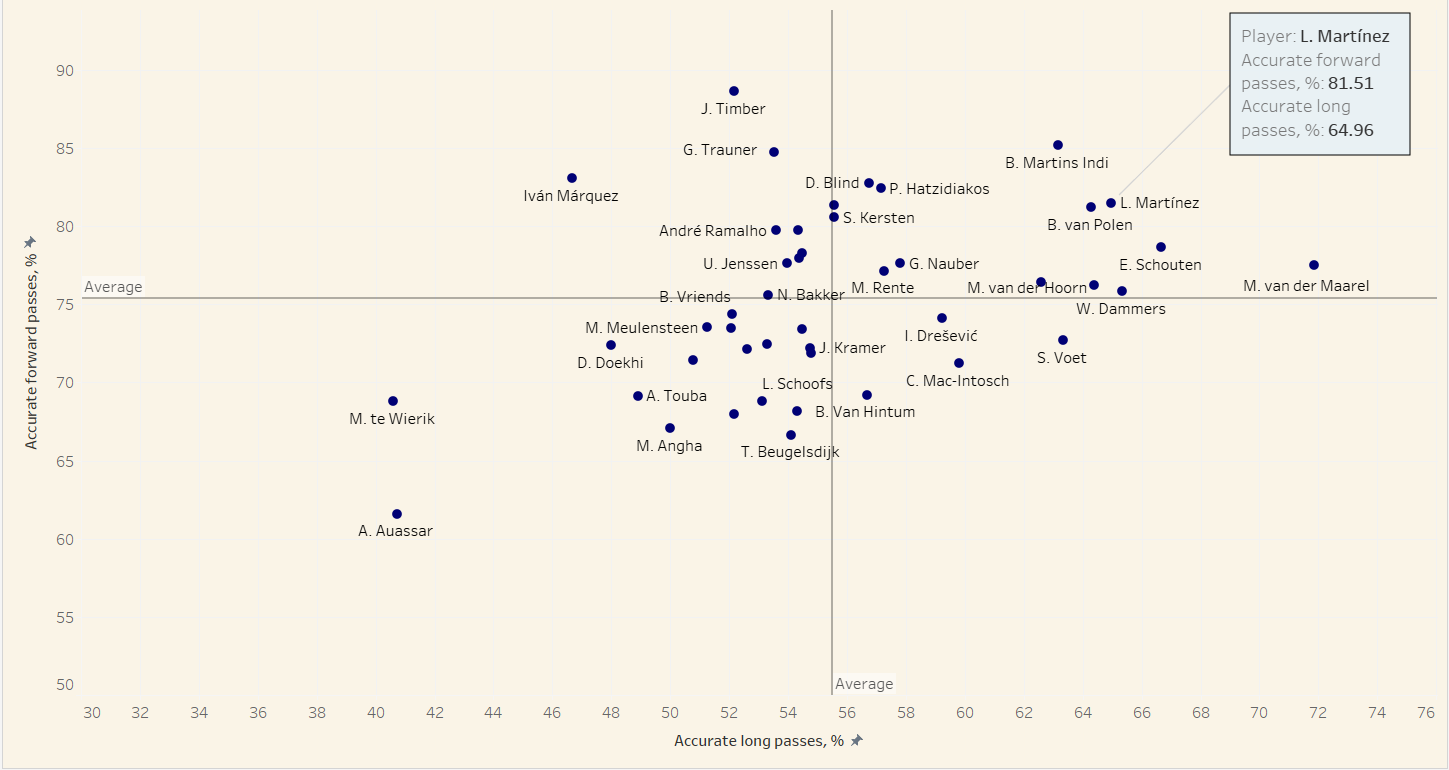 These two graphs should help indicate that Martínez is one of, if not the best in possession centre back in the Eredivisie with the ability to both progress the ball forward regularly and accurately.

Standing at 5,10 Martínez isn’t the biggest defender nor is he the most aggressive however he uses his intelligence of the game and anticipation to make effective defensive contributions usually with interceptions. In my opinion, the best defenders make defending look effortless and simple, this is because they have anticipated the play and positioned themselves to nullify any form of opposition attack therefore their actions may seem insignificant however are the complete opposite. Martínez is a defender whose defending fits this. Often using his intelligence to read the play and position himself correctly.  The following examples show this perfectly.

This is from the most recent World Cup qualifier against Colombia, they are in possession of the ball and Martínez is part of Argentina’s back four as highlighted. The new Liverpool man Luis Díaz has drifted infield and is looking to make a run between Argentina’s back four. 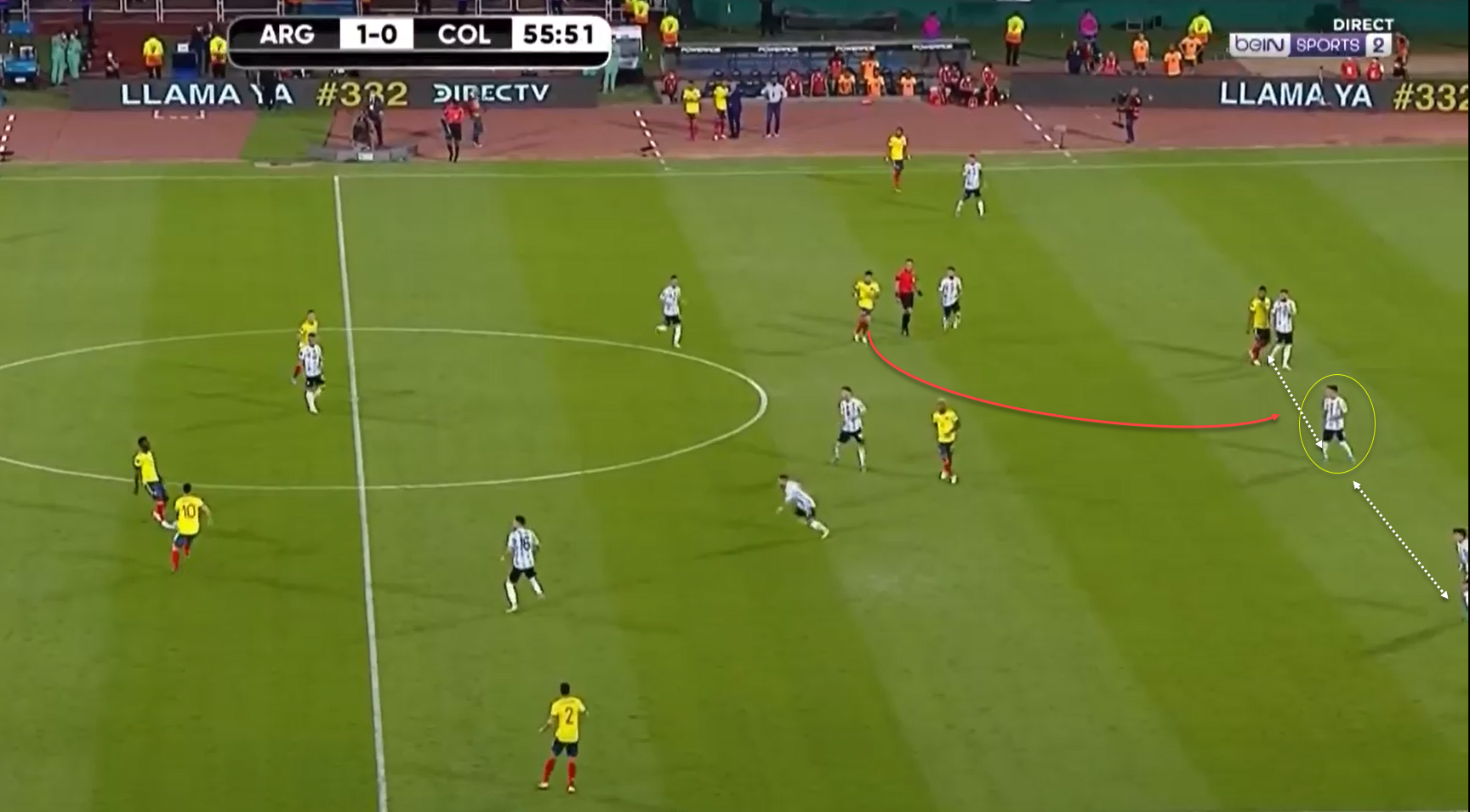 As Díaz is making this run, Martínez quickly scans the pitch and identifies the run Diaz is going to make, as shown below.

He manages to get in front of Díaz and make a perfectly timed interception to win the ball back. Demonstrating great anticipation and reading the game.

As it is hopefully becoming apparent Martínez’s greatest defensive contribution, is his reading and understanding of the game and this following example again highlighted this. The following is from a recent clash with rivals PSV. Ajax is defending deep and the ball has come out to their new recruit Joey Veerman who is looking to play a clipped ball over the back four to an on running attacker.

Martinez identifies the situation and drops deep to occupy the space Veerman wants to find. He makes the quick decision to drop deep beyond his defensive line and not play the attacker offside but position himself to win the ball.

Now as the ball is played Martínez is in a great position to head the ball away and make an effective clearance for Ajax.

Both the examples show Martínez brilliant ability to anticipate and read the game to make effective defensive contributions, usually in the form of interceptions but he can also make tackles and aerial duels as shown in the data.

We have already established in this scout report that Martínez can effectively contribute in possession with the ability to pass the ball especially pass the ball forward to the final third and with his progressive passes. The passing ability of defenders grows in importance as the majority of teams now build up their attack from the back. This requires most defenders to be comfortable on the ball and be able to make effective passes. This is definitely the case for Martínez who is exceptional on the ball and is often the start point for Ajax’s attacks. The following examples are for both Argentina and Ajax showing he can do it for both club and country.

The ball has been cleared by Chile and the Argentina attackers are retreating deeper, as the ball comes to Martínez, he has one touch and then picks out a brilliant pass to Cristian Pavón. Who is looking to attack space behind the Chilean defensive line, as shown below.

Martínez executes the pass to perfection placing the ball out in front of Pavón but also keeping it away from the Chile defender.  This then allows Argentina to restart the attack and is a great example of a progressive pass and pass to the final third.

Another excellent pass executed by Martínez comes against Colombia while on international duty. Argentina is playing out from the back and Colombia are looking to press them, as the ball comes to Martínez he has a touch and plays a lofted pass to a teammate who is in space and takes out the Colombia press and allowing Argentina to start an attack, in a strong position.

Argentina is now 5 v 5 in a good area of the pitch and can start a dangerous attack. 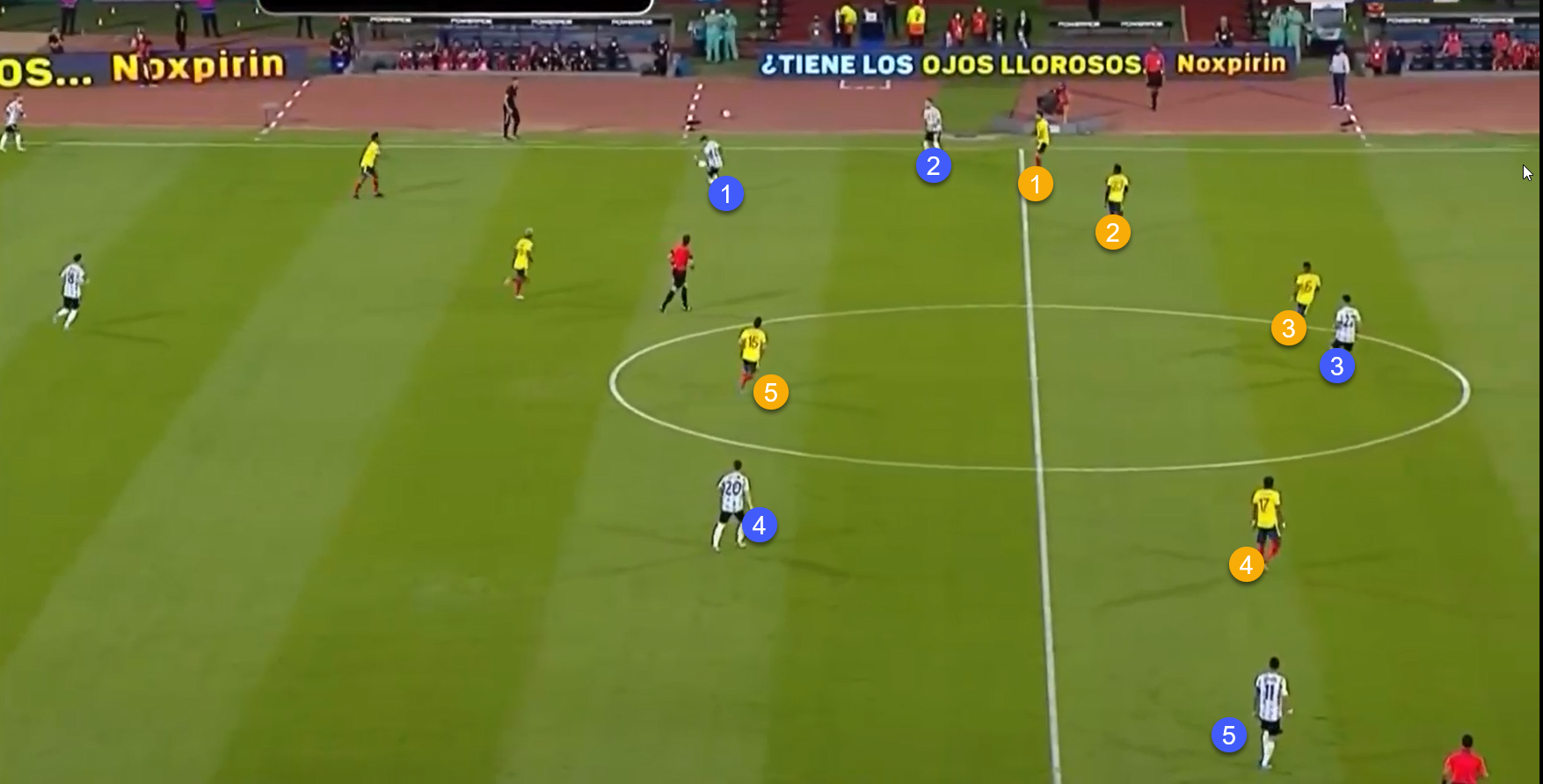 The final pass comes for his club and is in the PSV game, when playing for Ajax Martínez will often face teams whose tactics it is to sit in a  low block. This means he has a responsibility to try and break the first defensive lines and this is something he does well. Here you can see PSV defensive shape with two banks of three and a back four.

Martínez is waiting for a bit of movement from one of his attackers before he can make a pass to try and advance the ball. As Duśan Tadić drops into a pocket, Martínez plays a brilliant ball between the lines. Taking out six PSV players and putting Ajax in a great area to mount a dangerous attack.

The following examples hopefully show how effective Martínez is in possession starting an attack with his brilliant passing range.

Martínez is one of the best centre backs in the Eredivisie, followed closely by his partner Timber. His versatile defensive contribution makes him able to adapt and make effective defensive contributions in different situations and areas. This partnered with his excellent on-ball quality and the way he contributes to build-up play is excellent. Hopefully, this analysis has helped you understand how and why he is so effective in these areas.