Ajax are known for always giving a chance to youngsters and developing them into players that can compete on the highest level and are wanted by the top European teams. In the summer of 2020, they invested in another young player, Antony, who arrived from the Brazilian São Paulo at 20.

Their aim was to secure another option for the right-wing position as they could only rely on his fellow Brazilian David Neres and needed more depth, especially having in mind their contribution to the Champions League.

Antony immediately fit into the team’s strategy and made 46 appearances in his first season in Amsterdam, scoring 10 goals and assisting 10 more. His impact on the team’s attacking actions continues to grow this season too, as he has already scored three and assisted five in 13 games. The 21-year-old not only provides a threat in front of the goal but is also very beneficial in ball progression, adding a lot of explosiveness and creativity to Ajax’s attack.

The team currently sit first in Eredivisie, although they are tightly followed by PSV and Feyenoord and only their impressive record in defence is keeping them a step forward. They are also leaders in the CL Group C, where it is safe to say Antony’s performance pushed the team past Sporting CP (Primeira Liga) and Borussia Dortmund (Bundesliga).

This tactical analysis in the form of a scout report explains how the Brazilian enhances Ajax’s performance and how he fits Erik ten Hag’s tactics.

Erik ten Hag switches between the 4-3-3 and the 4-2-3-1 formations, focusing on the attacking actions and creating as many opportunities in front of the goal as possible. The team are equally aggressive both in their attacking approach and defensively. They are the team that produces the most shots per 90 in the league (18.06) but also the team with the highest press intensity with a PPDA rate of 6.36.

While the team rely on high shot frequency in attack, they don’t neglect their defensive actions and look to immediately press when they are out of possession. That has resulted in them conceding only two goals in 12 games so far this season.

Antony is equally important for Ajax both in and out of possession. As a right-winger, he is responsible for creating goalscoring opportunities for his teammates but also for being a direct threat. And his contribution to the ball progression is undeniable too.

It is impressive that he takes his defensive responsibilities as seriously as his attacking ones and is one of the key players to trouble the opposition and successfully act as the first line of defence by pressing high.

Most frequently the team’s tactics involve exploiting the wide areas and creating their attack through the flanks. While Daley Blind and Dušan Tadić are the main players responsible for this on the left, whenever Antony plays, he combines perfectly with the full-back and the right centre-back on the other side.

Contribution to the ball progression

The 21-year-old is crucial in ball progression thanks to his ability to hold on to the ball and dribble past the opposing players. He often drops back to the central line to pick up the ball and advance it, using his creativity and strong decision-making to create opportunities for the team.

Antony is second in Eredivisie in terms of dribbles per 90 and his 9.92 attempts on average make him very difficult to defend against. His composure allows him to play under pressure and quickly deliver the ball to the final third and decide how to finish the attack. He combines well with his teammates and is involved in the short pass combinations on the right.

He impacts the build-up mostly with his progressive runs. With his 4.27 progressive runs per 90 (fourth in the league) he often allows the team to move into a more advanced position and overload the opposition half, while he has control. His confidence on the ball is very beneficial when counter-attacking as he could easily transition the ball to the opposition half and expose them.

The Brazilian has strong positional awareness which allows him to take advantage of many opportunities as he provides more options to his teammates and is often relied on to break through the opposing defences. He most frequently combines with Jurriën Timber and Noussair Mazraoui, who deliver the ball to him from deep and use his positioning to open the passing lanes and break through the press.

Antony’s versatility in attacks provides the team with many options. He doesn’t limit his movement to the wide areas, but also freely and frequently likes to cut inside with the ball and provide a direct threat.

He reads the game well and the combination of smart movement and passing makes him a difficult opponent to play against. His dribbling abilities help him in moving deeper into the opposition half and in supporting his fellow attackers’ movement with crosses. His 5.8 crosses per game increase Ajax’s explosiveness in attack immensely as he sets up players like the former West Ham striker Sébastien Haller perfectly in front of the goal.

The 21-year-old has a flair for a good pass too. He often uses his body language and control to lure defenders and send well-measured balls to his teammates in the box, creating goalscoring opportunities by dismissing the defensive line. Antony is first in the league when it comes to smart pass frequency (1.98 per 90) and his attempts are with the highest accuracy too.

His movement to the half-spaces isn’t only beneficial in terms of providing the ball to his teammates. It allows him to provide a direct threat. Tadić, Haller and Antony are the players with the most touches in the box on average per 90 in Eredivisie. This shows the wingers’ movement and versatility.

Antony is actually the league player with the highest shot frequency per 90. Despite his wide role, his tendency to cut inside and move into goalscoring positions often results in him shooting. Unfortunately, his accuracy is not among the highest and isn’t able to transform the chances into goals that frequently, although his efforts bring enough chaos and destabilize the opposing defences, allowing Ajax to expose them more frequently.

The young player is not only dangerous in the penalty area. Whenever he is unable to find a teammate for a pass or is marked too tightly, he would shoot from outside the box and try to catch the opposition off guard.

Antony’s defensive contribution when in comes to the actions in Ajax’s own half isn’t very high, as he rarely drops deeper to support with direct challenges. He does contribute well to the team’s pressing strategy, though. As mentioned, Ajax only allow 6.36 passes per defensive action and they like to keep the press intensity high, troubling their opponents’ build-up and trying to recover the ball in the advanced areas. They apply press in all lines and manage to balance out their energy and positioning quite well. Their successful execution of the strategy is possible thanks to the forward players who are very dedicated to gaining back possession and immediately using it to create chances. Antony’s 6.1 recoveries per game provide additional support to the team and help them in stopping dangerous attacks.

His contribution is also beneficial for creating counter-attacks as he often steals the ball in the opposition’s half and is able to quickly deliver it further so they can catch their opponents off guard.

Antony proves his abilities with every chance he gets and increases Ajax’s attacking efficiency with his smart movement and creativity. As our analysis shows, he offers versatility and his skills on the ball and his positional awareness fit perfectly to Ten Hag’s tactics and to Ajax’s attack-minded style of play. With his promising displays so far, he has shown that he deserves a starting spot in the future and if he shows consistency, it won’t be a surprise if he becomes Ajax’s next big name both at home and in Europe.

France’s Ligue 1 is the self-styled ‘League of Talents’. The French top-flight lives up to this moniker by constantly producing […] 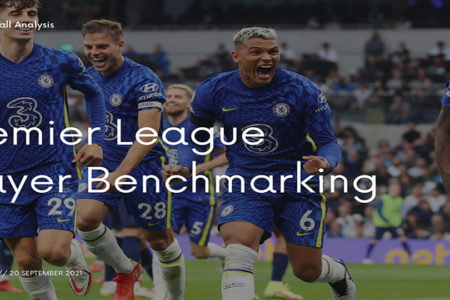 Premier League 2021/22: Which player tops the xG per 90? Who has the most recoveries in the opponent’s half?

Following GW5 of the Premier League, we’ve pulled together all the player stats for you to have a look at. […] 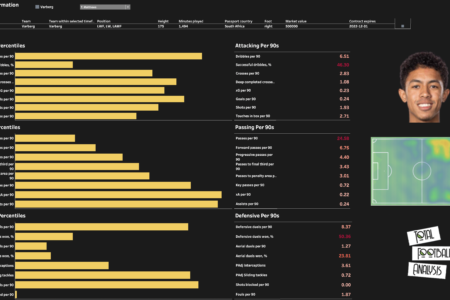