On Tuesday evening in the Champions League, Ajax took on Borussia Dortmund in a group game. At the time of the game, both teams had 100% records having both beaten Besiktas and Sporting. Whilst Ajax enjoyed the home advantage it was surprising to see them come away with such an emphatic win and statement as they put four past Borussia Dortmund, with no reply from the visitors. This tactical analysis will break down the tactics used by Ajax to beat Dortmund so comprehensively on the evening. This analysis will also highlight some of Dortmund’s own failings.

Ajax unsurprisingly lined up in a 4-3-3 with Daley Blind, Lisandro Martinez, Jurrein Timber and Noussair Mazraoui making up the back four. Whilst the image below shows Edson Alvarez operating as a single pivot, and Ryan Gravenberch playing as a double 8 with Steven Berghuis, in reality, Berghuis play significantly higher than the other two, with Gravenberch making a double pivot with Alvarez for much of the game. Ajax’s front three was made up of Dusan Tadic, Antony, and Sebastien Haller as the focal point through the middle. Remko Pasveer started in goal.

Dortmund mirrored Ajax’s formation, at least on paper, with a 4-3-3 themselves. Nico Schulz continued at left-back after playing the previous weekend against Mainz, whilst Mats Hummels, Manuel Akanji and Thomas Meunier comprised the rest of the back four. Axel Witsel played as the single pivot with Jude Bellingham and Julian Brandt in front of him. Donyell Malen, Marco Reus and Erling Haaland gave Dortmund a front three, whilst Gregor Kobel started in goal. 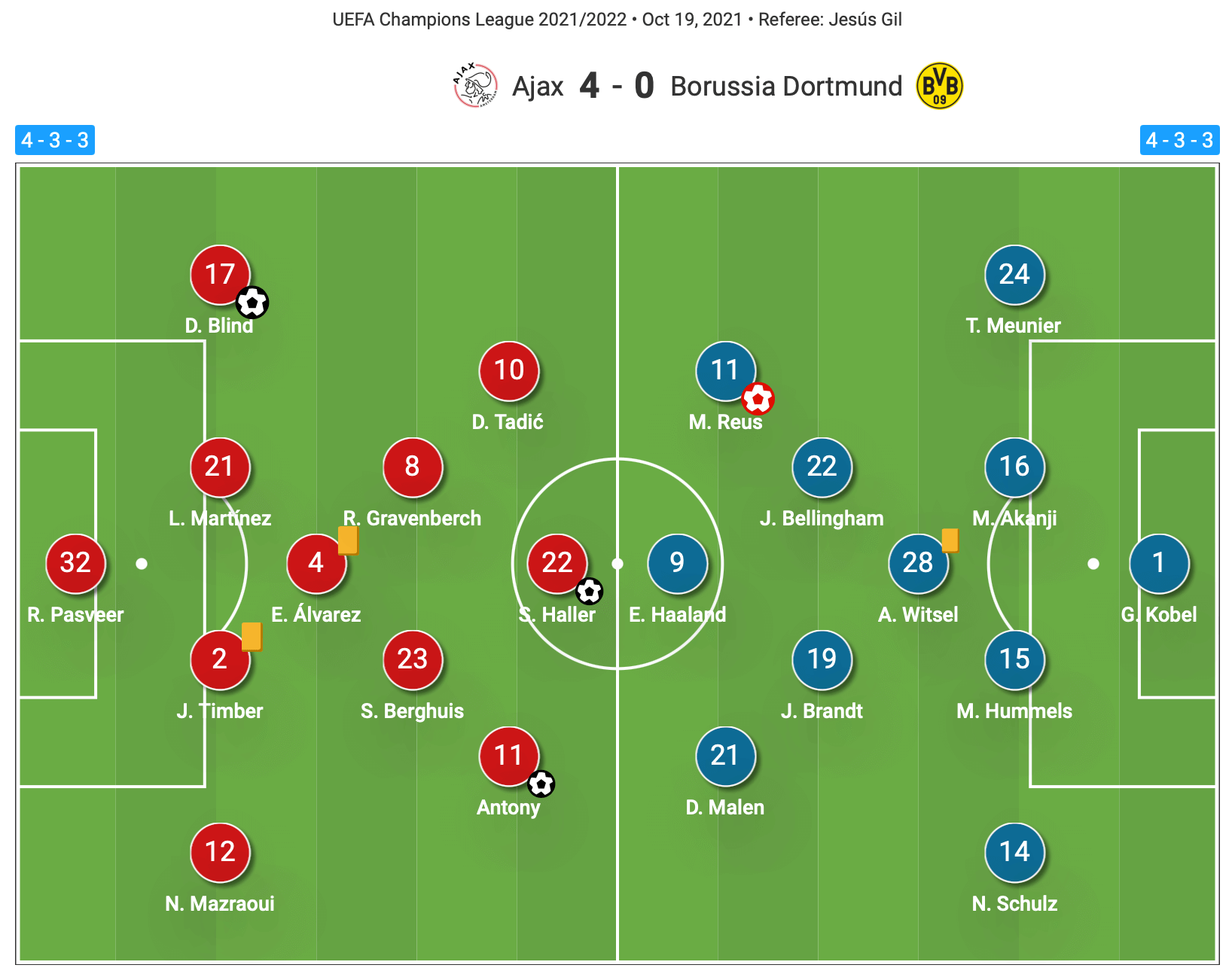 Ajax continuously looked to have an extra runner from midfield push forward from midfield to cause problems for Dortmund’s stretched defence. Ajax looked to match up the centre-backs against two of their front three, whilst the spare attacker would stay high and very wide on the opposite flank. Whilst Dortmund’s two centre-backs would get tight with the attackers, it left Schulz vulnerable, who felt he had to stay wider than perhaps he would have liked due to the attacking presence outside of him. This left space in between for a midfielder, most often Berghuis, to move into. 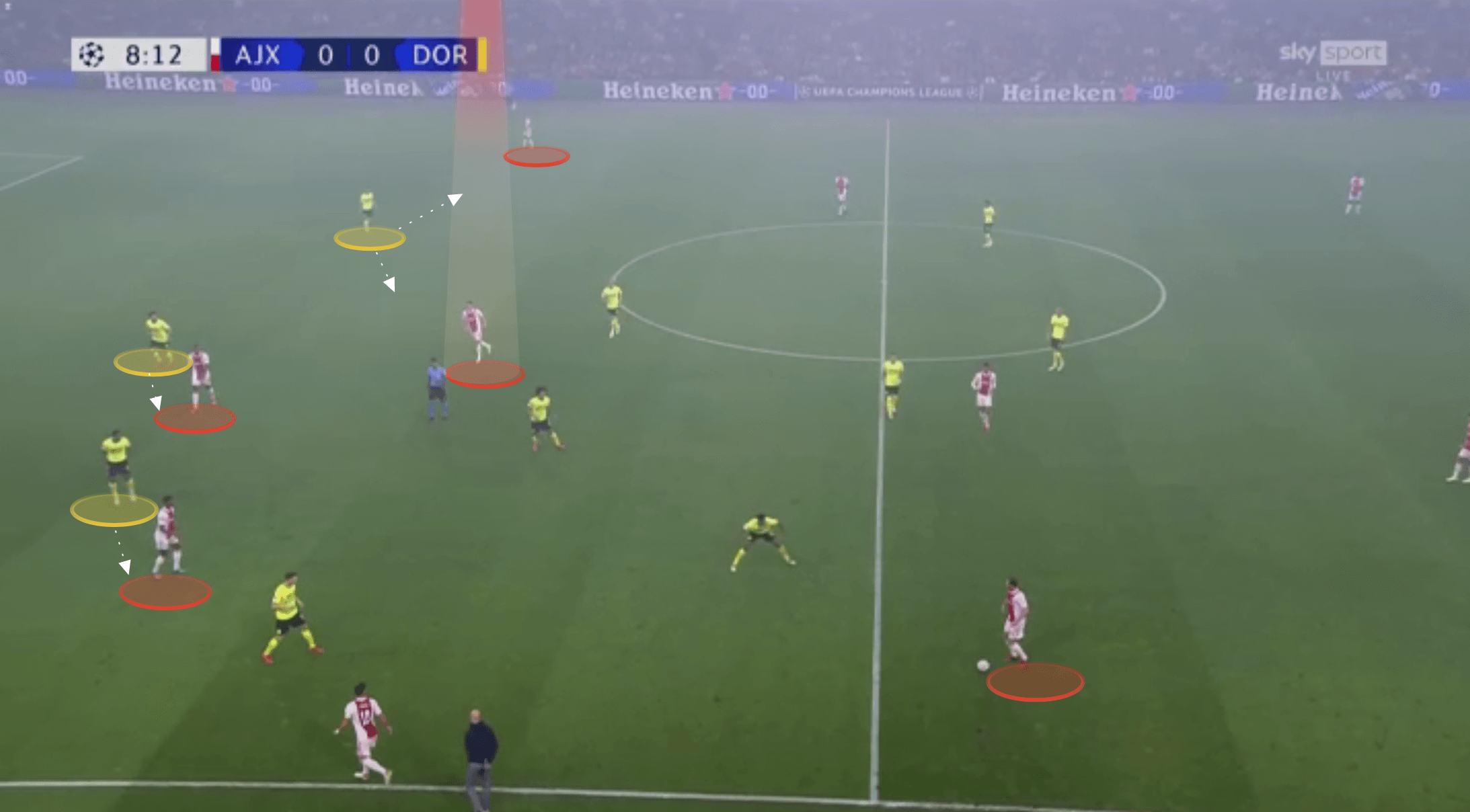 Ajax were able to access this space by repeatedly shifting Dortmund’s defence from one flank to the other. Dortmund would initially start relatively compact, but this high tempo circulation from Ajax meant as the ball was played at wide, as it was in the image below, the home side could drag Schulz out enough to cause this separation between himself and his centre-backs positioned inside from him. 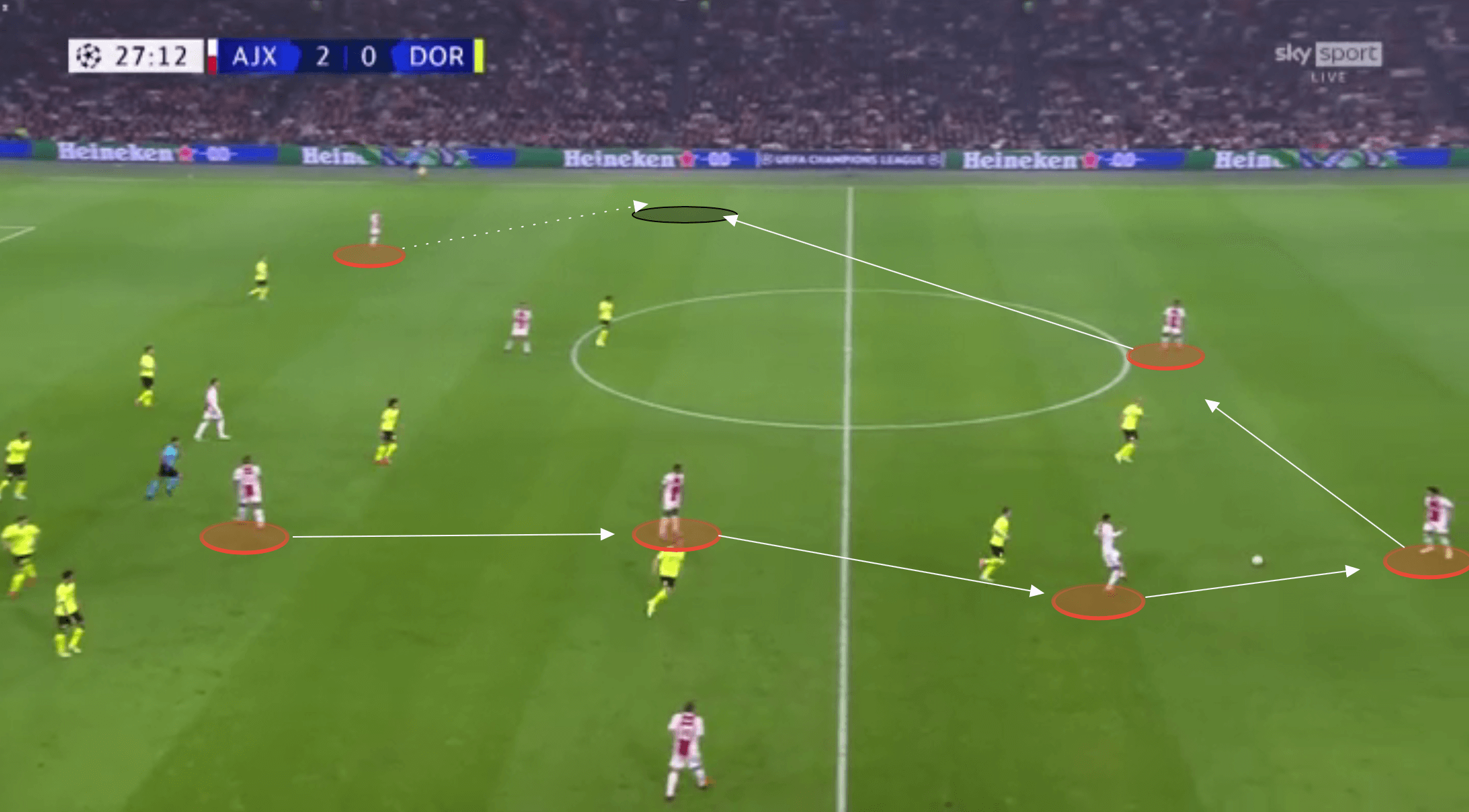 As the ball was circled back across the pitch the midfielder pushing forward would once again look to hit the space created between Dortmund’s defence. 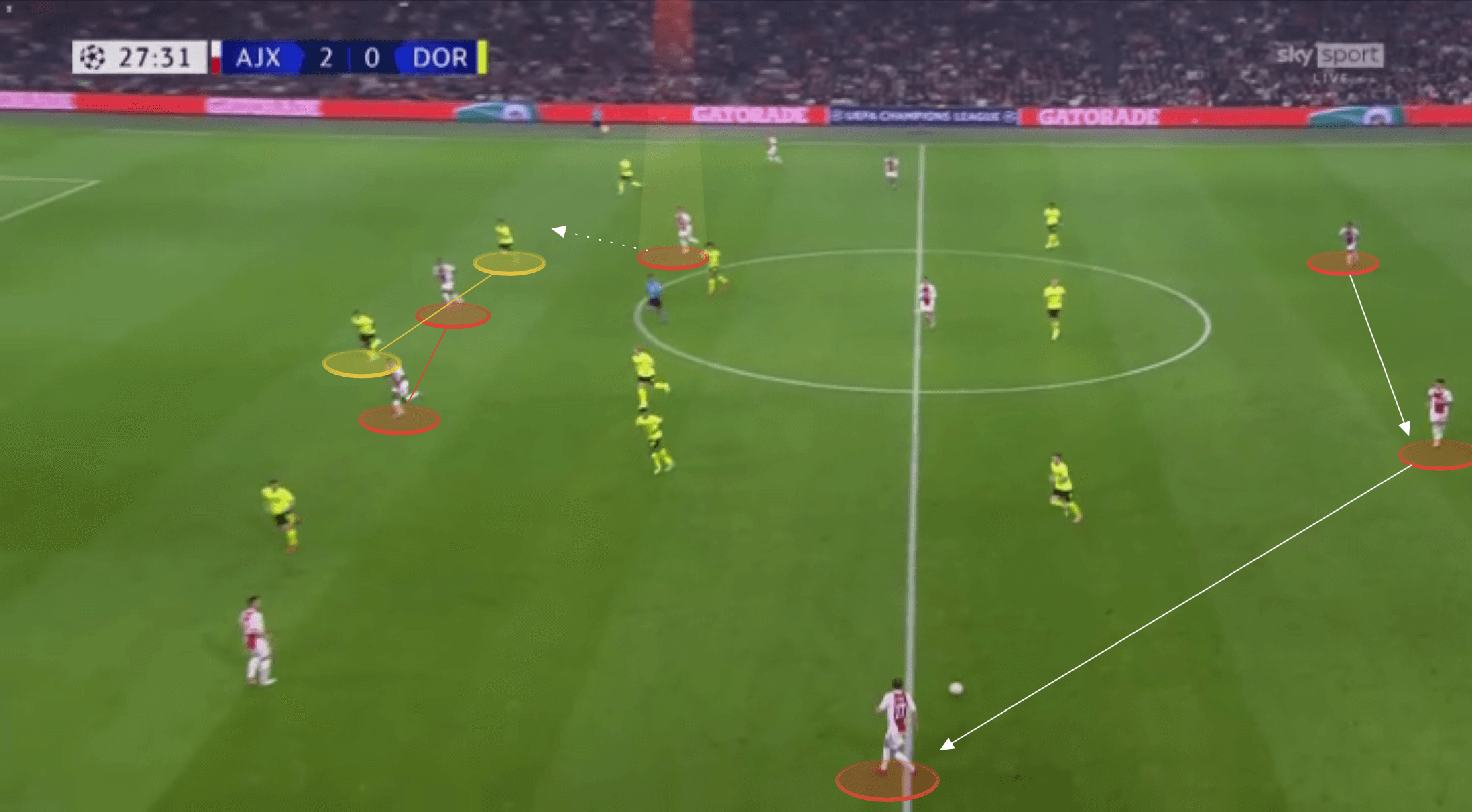 The gap became even more significantly big due to Dortmund’s defence getting dragged very far to one side. Ajax would load the wing and half-space and as such could break the lines and get the ball immediately into their attack. Dortmund’s midfield weren’t comfortable shifting across the pitch to cover this, but with them pressing high too, we can see in the next image how vacant the midfield is with Berghuis once again stealing forward into the space to play off of Haller’s shoulder. 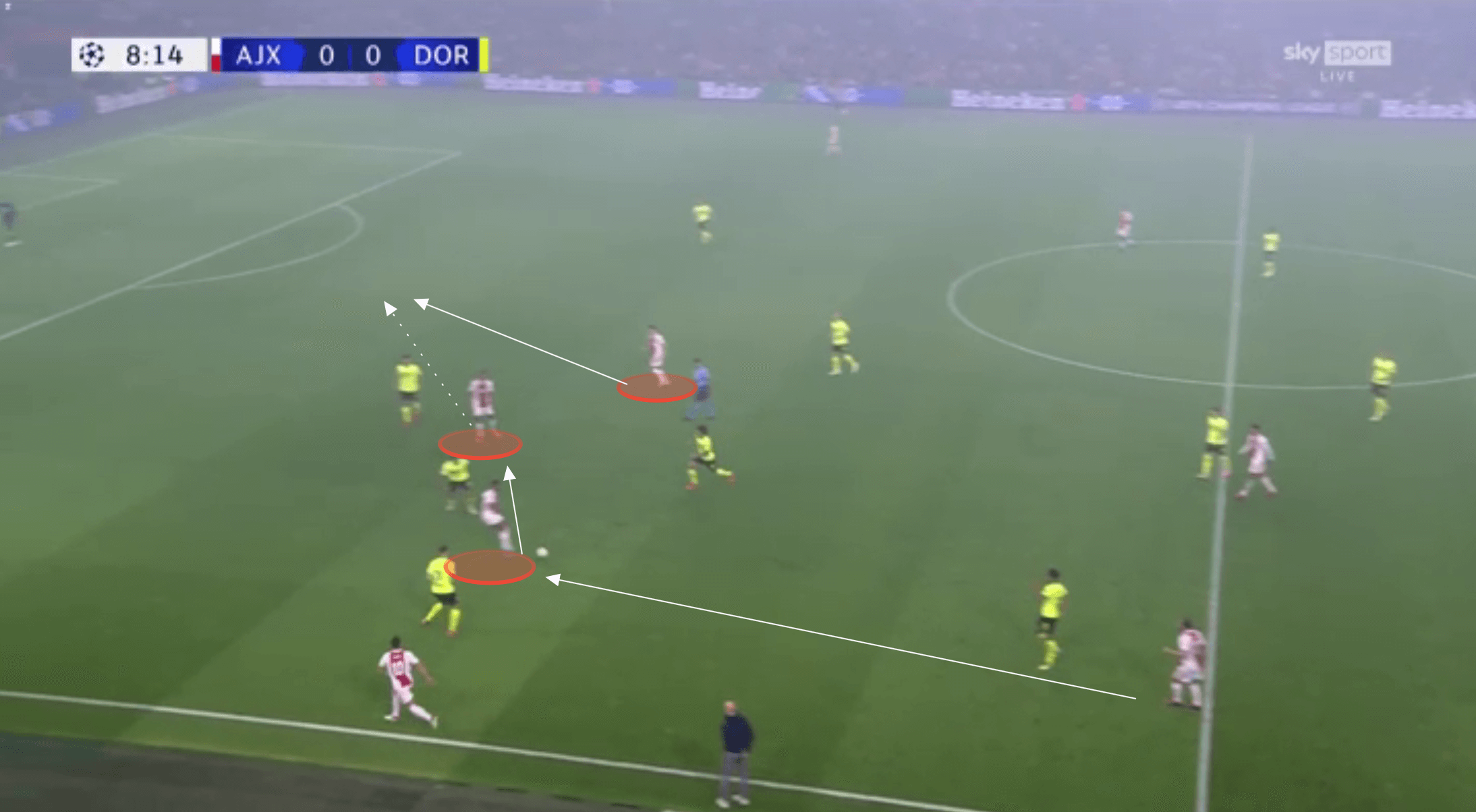 Ajax’s movement as a team was highly impressive throughout the evening. As they circled possession there were always players rotating into different spaces. One movement from one player would then have a counter-movement from their teammate in order to create as much space for them as possible.

We can see an example of this below as the ball is played out wide. We can see one of Ajax’s central midfielders, Alvarez, moving across the pitch at pace from a central position, whilst Gravenberch looks to initially make a similar movement before darting into the space in behind. 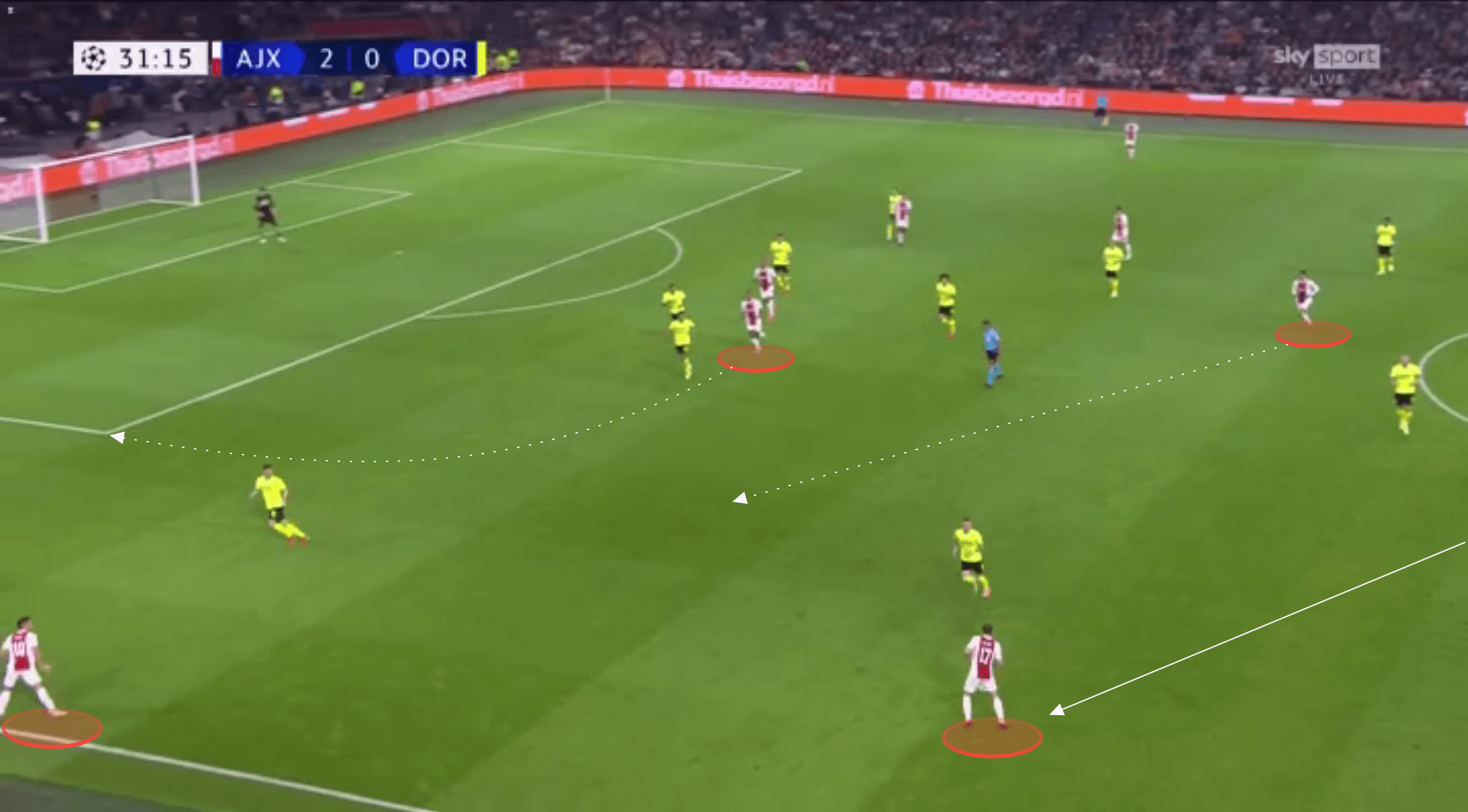 Gravenberch’s run was able to draw Bellingham away from the midfield and as the pass came inside, Alvarez was able to receive in space. As he receives we can also see Witsel beginning to press forward at pace, creating space centrally. All of this occurs with a big overload on the opposite flank, ready for Ajax to circulate possession once more having drawn Dortmund across the pitch successfully. 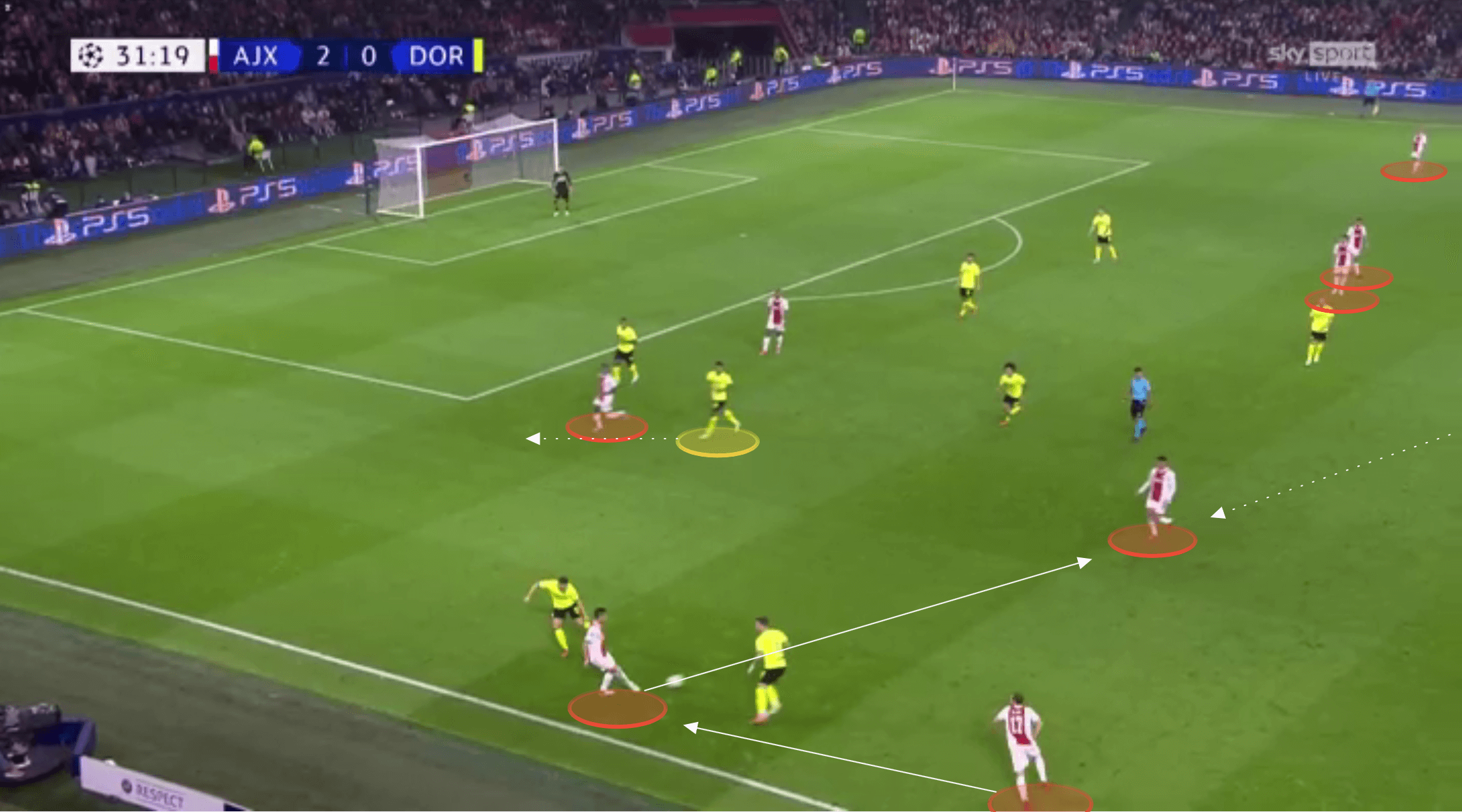 Whilst the movement was fluid, the speed of play was impressive too. Ajax were patient in possession but would change it up and be direct, moving the ball forward from the keeper to an advanced attack in three or four passes at times, yet all with ground passes.

Dortmund were aggressive with their pressing shape, and Ajax countered this by, other than their single pivot, keeping the rest of their midfield and attack high and beyond Dortmund’s central-midfielders. We can see this in the image below with Dortmund’s midfield pushed forward on top of a front three pressing Ajax as they look to build-up. Right-back Mazraoui would invert from his wide starting position. As Ajax’s pivot was marked tightly, the player marking would then look to try to continue marking the pivot whilst also blocking Mazraoui from receiving a line-break pass from the keeper. As a result, this Dortmund player was pulled slightly across. 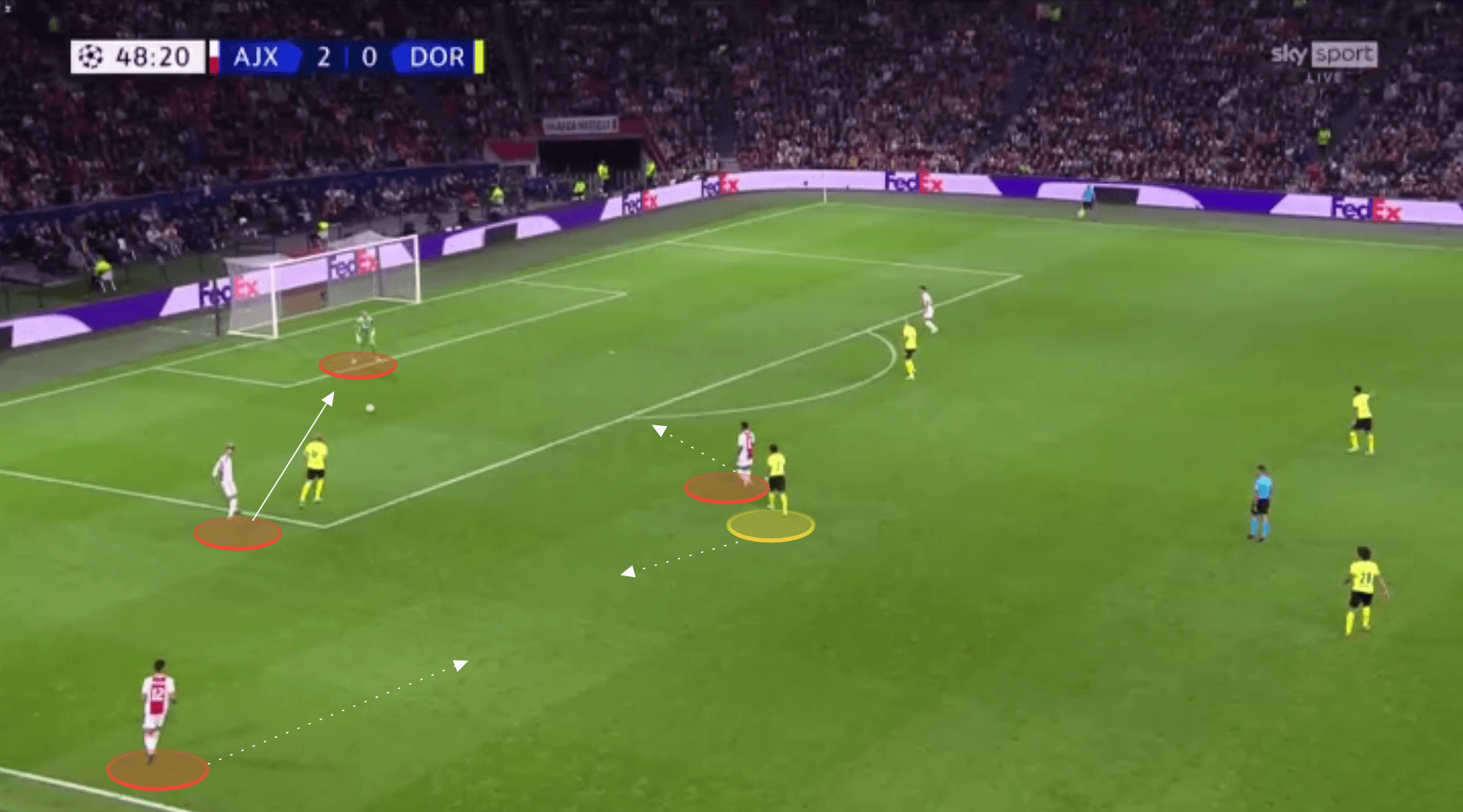 This created enough space for Ajax to play forward and Mazraoui would then continue to push inside but now into the space behind where he could receive a line-breaking pass himself. 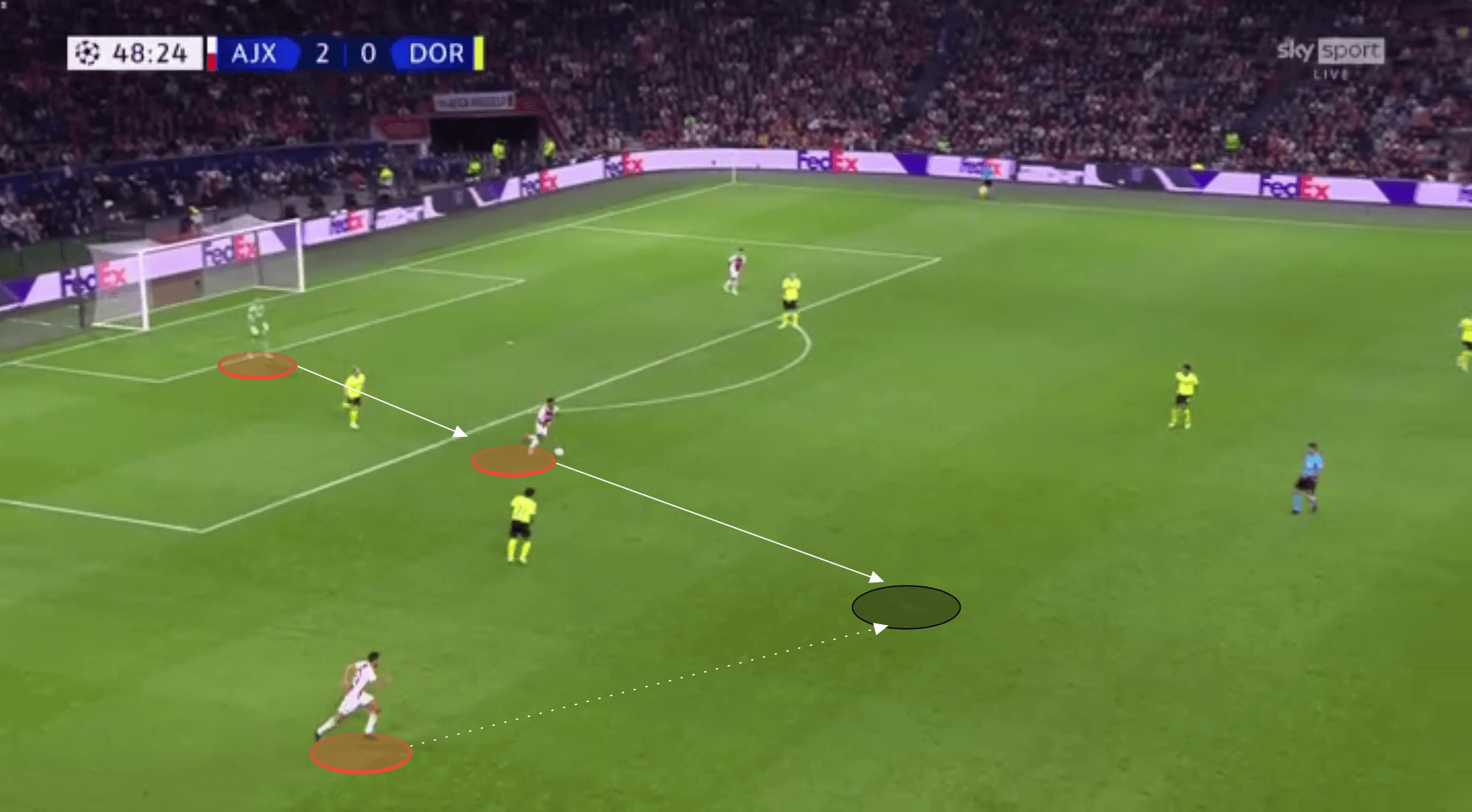 Mazraoui then played out wide before under-lapping, isolating Schulz in a 2v1 and allowing Ajax to get the ball behind Dortmund’s defence and get into an advanced attacking position in a matter of seconds. 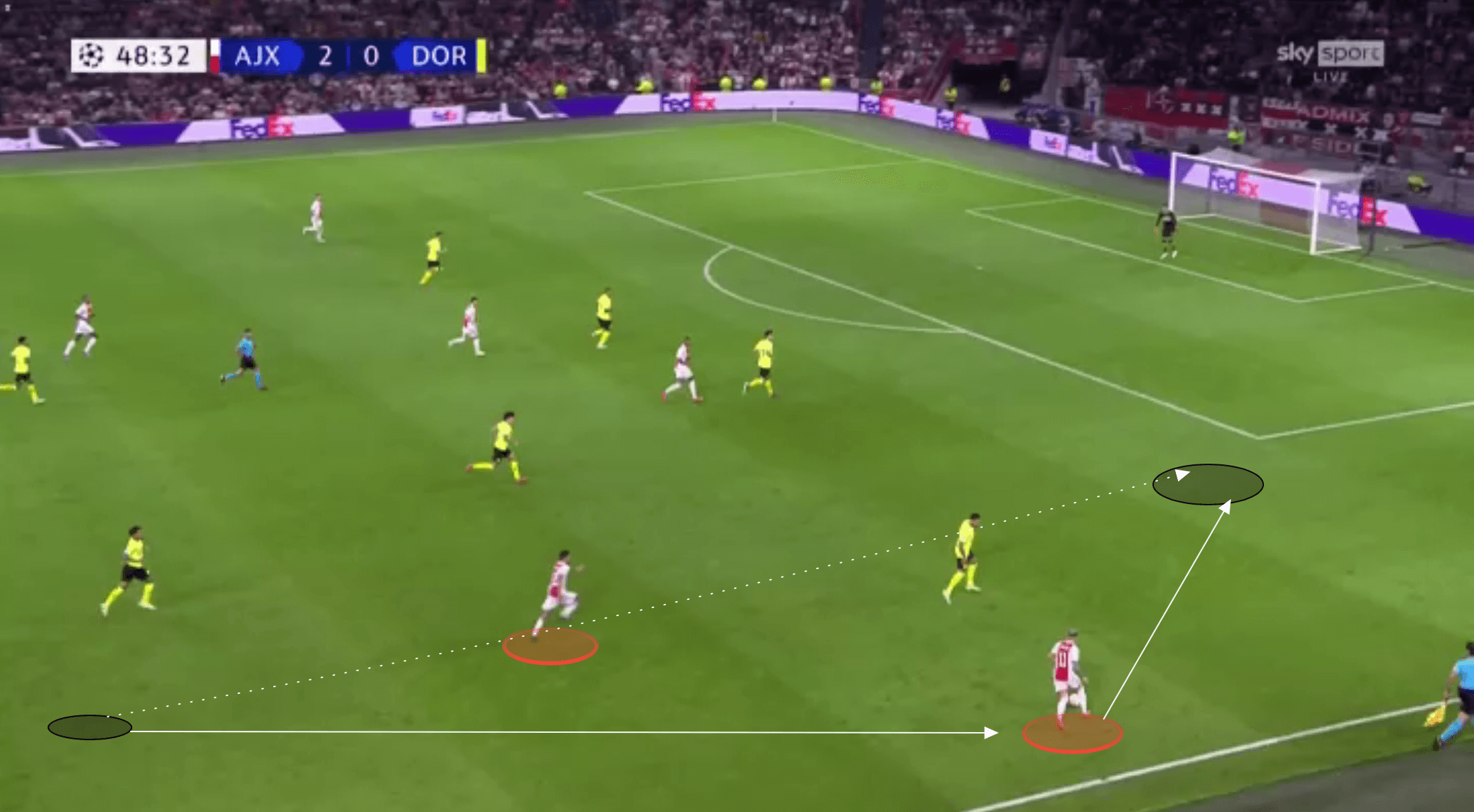 Dortmund’s back four seemed intent on not allowing any kind of through pass to break their line over the course of the game. As a result, they sat back and weren’t aggressive in pushing out even when the ball was on the edge of their area. This left the likes of Witsel and Bellingham to do a lot of the running to prevent shots coming in from these distances. Whilst conceding shots from in front of the back four rather than behind is certainly preferable, Ajax still finished with an xG of 2.4 from the game. Yes, this is much lower than their four goals, suggesting they might have been a touch fortunate or were just very good at finishing on the night, but this is still a significant xG against for Dortmund to be conceding.

Several of Ajax’s shots on the night came from the Dortmund defence not playing on the front foot and instead gave space for the ball-carrier to get a shot away.

One such example was for the second goal. Haller, holding the ball up against a compact Dortmund backline was able to bring the ball down on the edge of the area. One reason he wasn’t immediately swamped by Dortmund’s defence was that he wasn’t entirely isolated – in fact, anything but. His two attacking teammates lingered just on the outside of the full-backs, and with Dortmund not looking to concede chances close to goal behind their defence, the defence were pinned back by this. 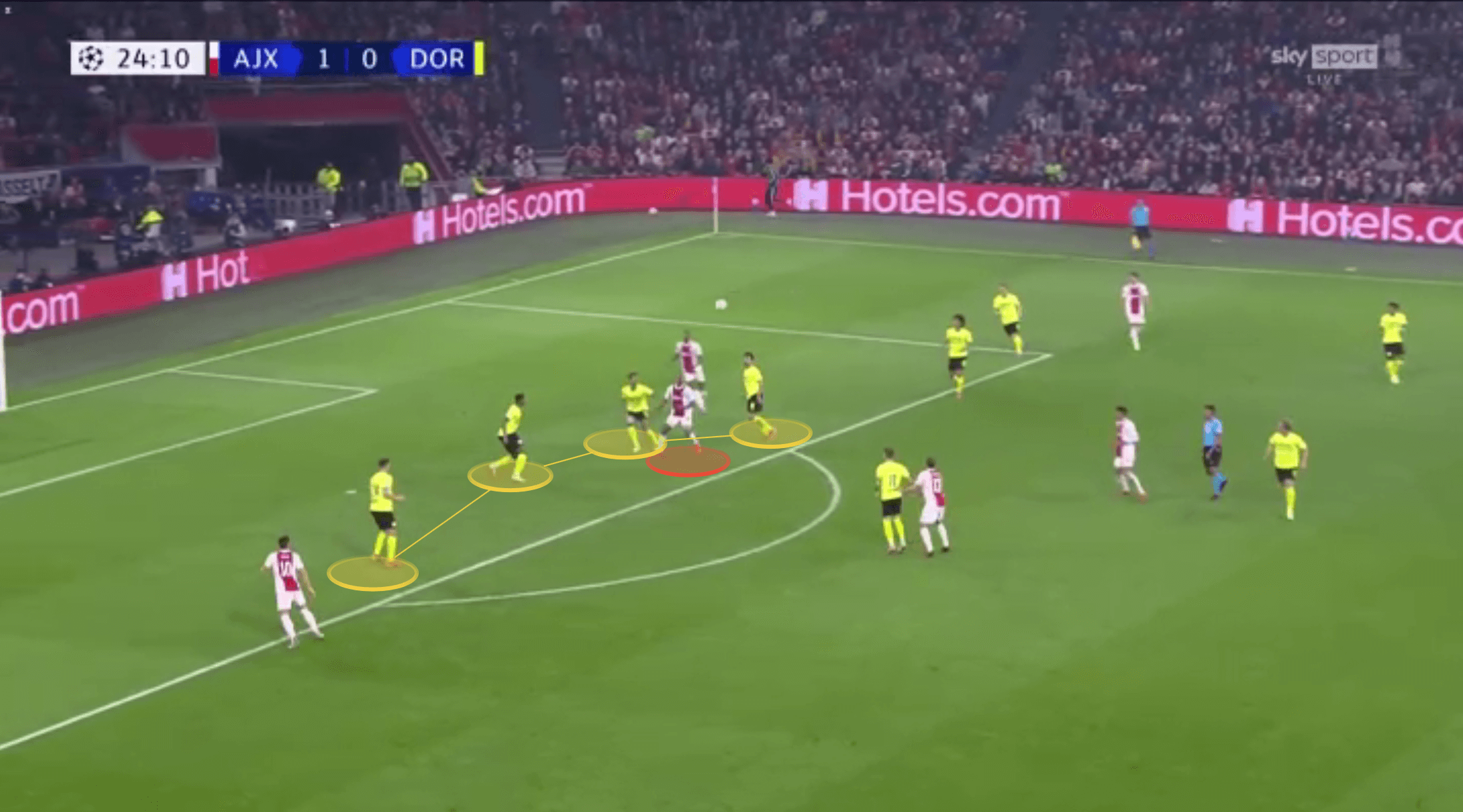 Yet as Haller laid the ball off to Blind who lingered on the edge of the box there was little reaction from Dortmund’s defence. Akanji in particular, who gains nothing in this example from holding his position, chose to stand his ground and not close down the shot. Blind was able to score from this distance. 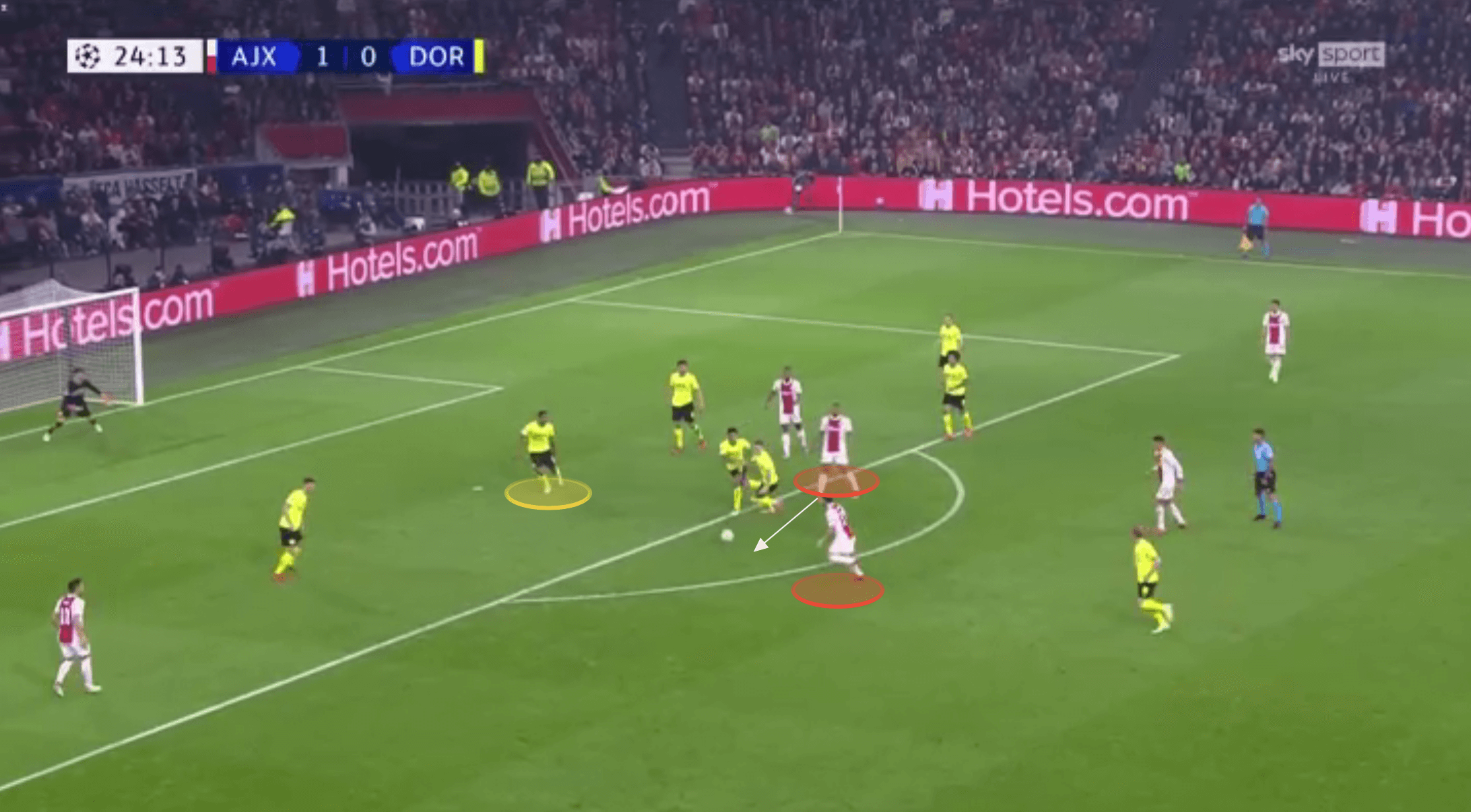 Another example came at the beginning of the second half as Haller once more did a terrific job of receiving and looking after the ball in an advanced position before laying the ball off to Mazraoui. 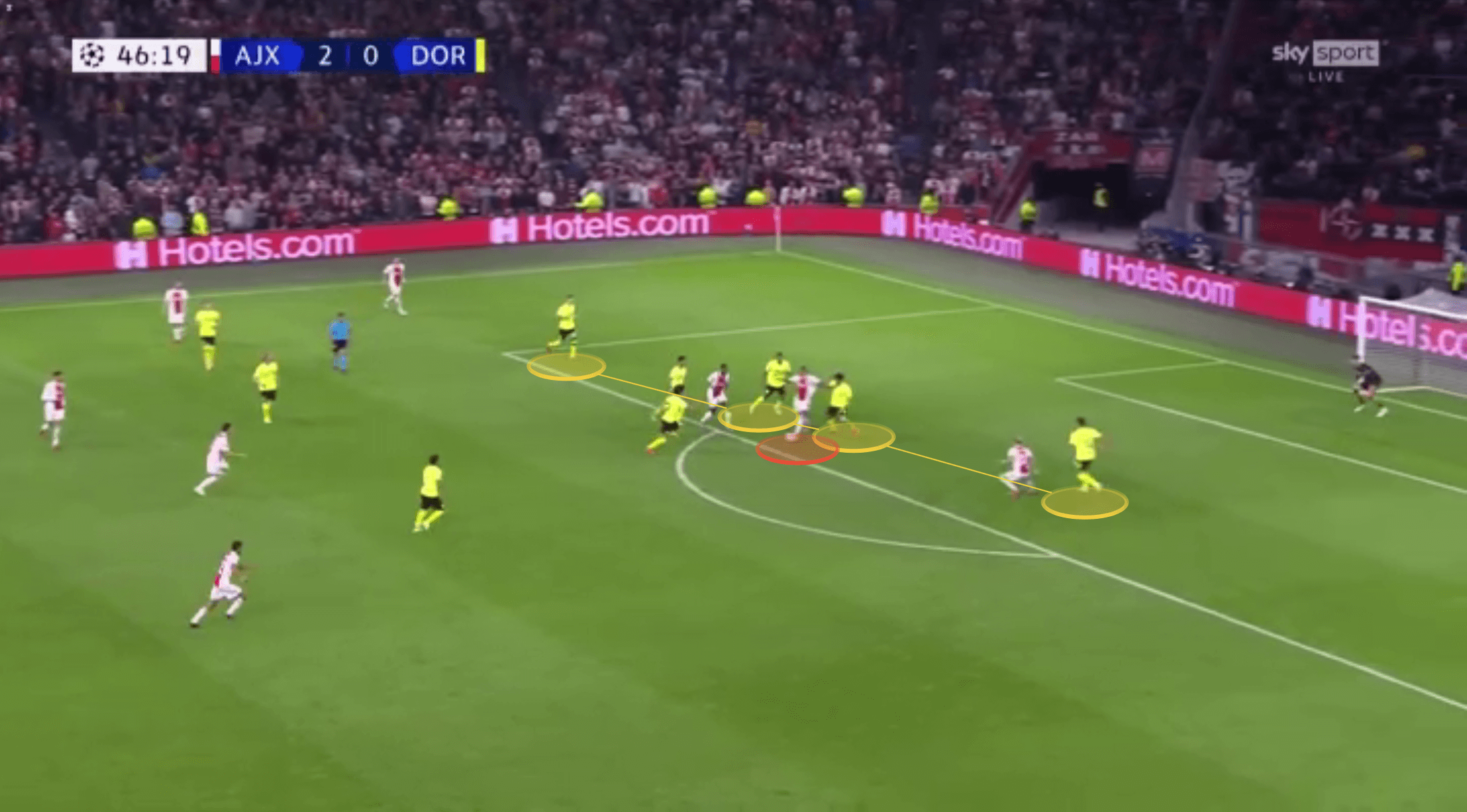 As Mazraoui dribbled initially away from goal before cutting back on himself both Dortmund’ defenders stood static, some way off the ball. It’s Akanji once more in particular who stands nothing to gain from holding his position but can clearly see Mazraoui about to unleash the shot. 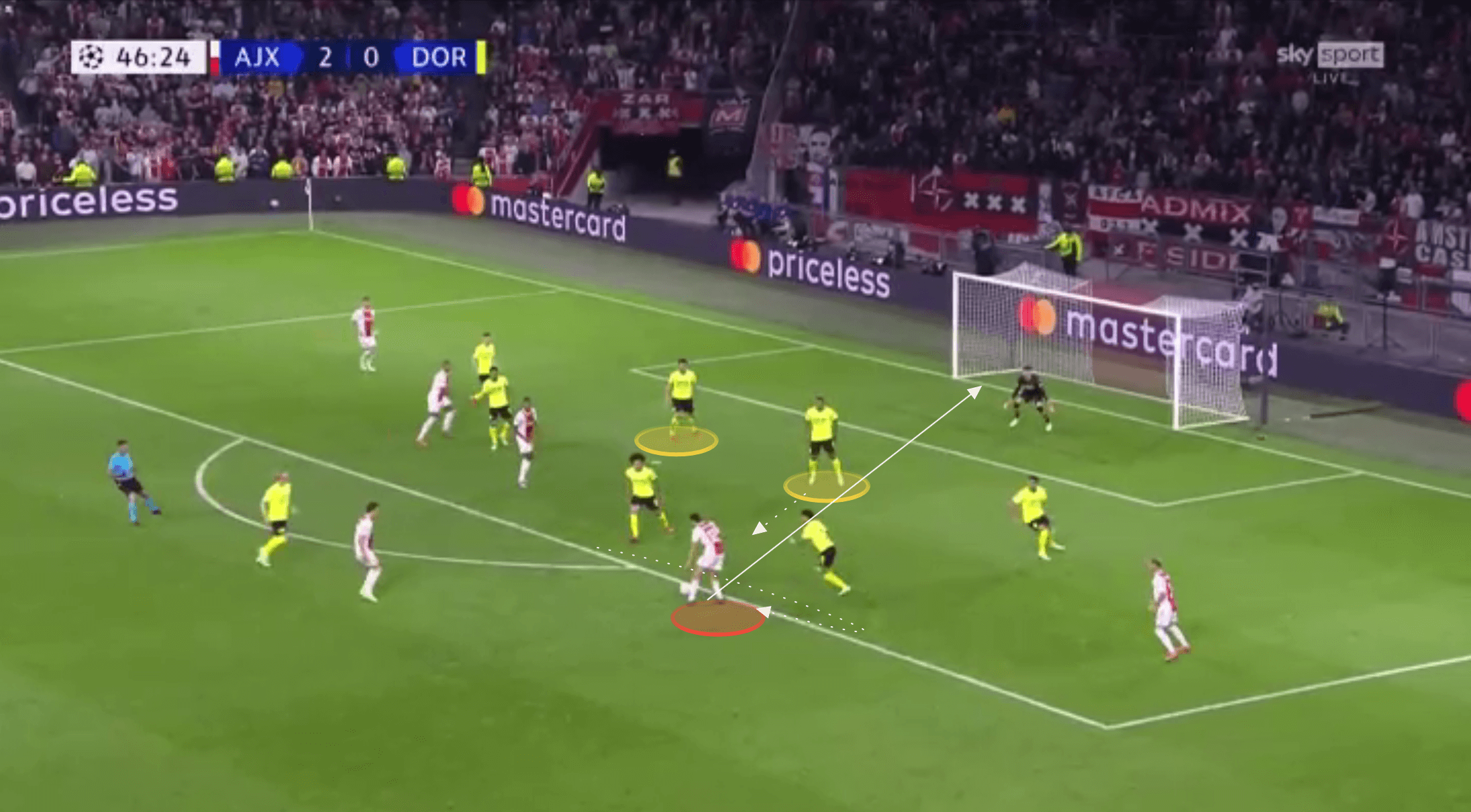 After a tricky spell with West Ham Haller is rejuvenating his career at Ajax. He did well immediately upon arriving last season and scored 11 goals and made five assists in a fruitful end to the 2020/21 campaign. This season he has hit the ground running with two assists but more importantly 12 goals in 13 games in both cup and league. It isn’t just his output that is so impressive but the movement and hold-up play we saw him use to such devastating effect at Eintracht Frankfurt has once more returned to his game.

For the fourth goal of the game, Haller exhibited basic but incredibly effective movement. Seeing Akanji had left Hummels isolated centrally, Haller drew the centre-back towards the front post, initially moving into this area. As the pass was played out wide, and expecting the cross, Haller then doubled back on himself, moving to the back post. 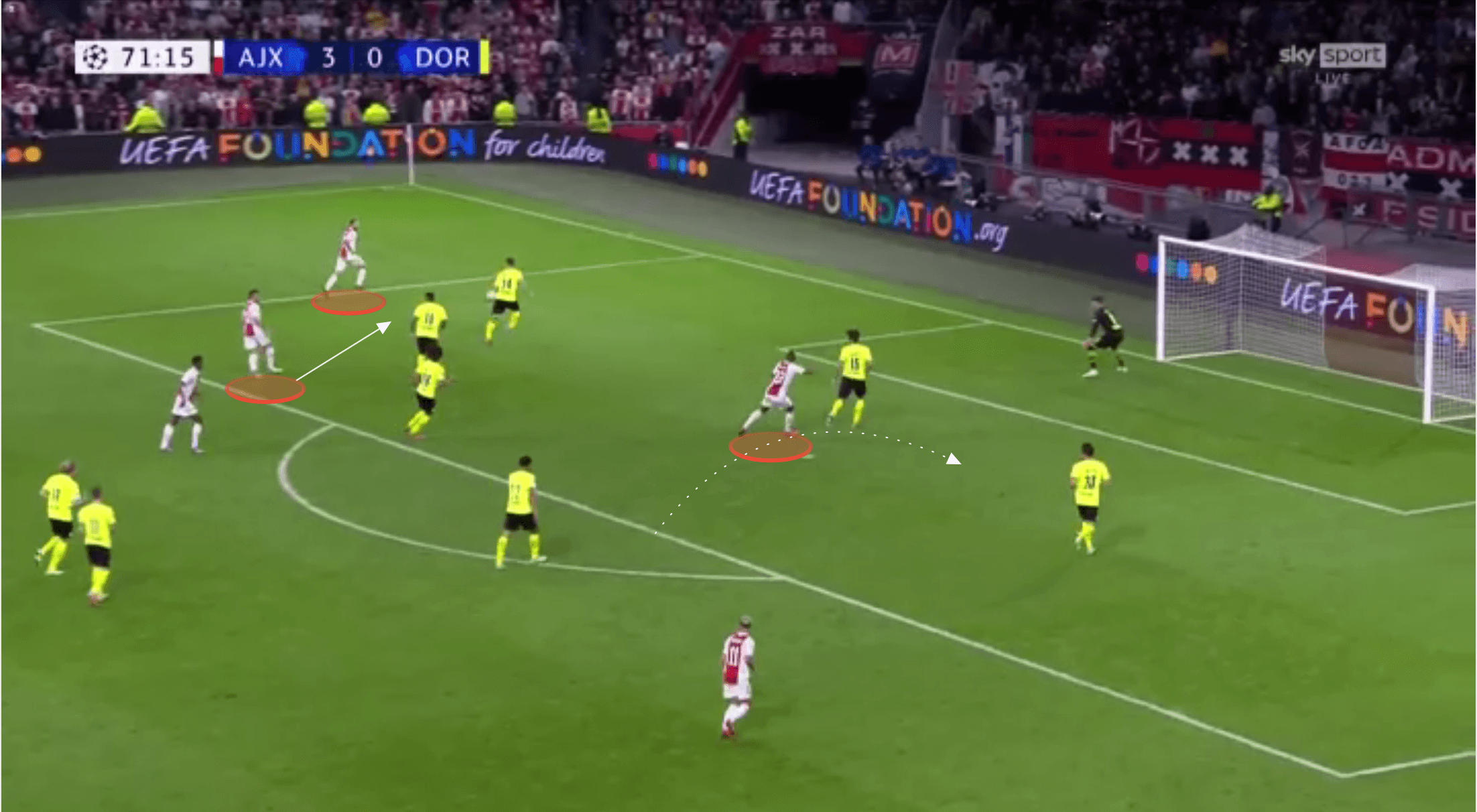 In doing so Haller allowed the cross to take Hummels out of the picture and he had space, and only a contest from Schulz to deal with, as he headed home from close range. 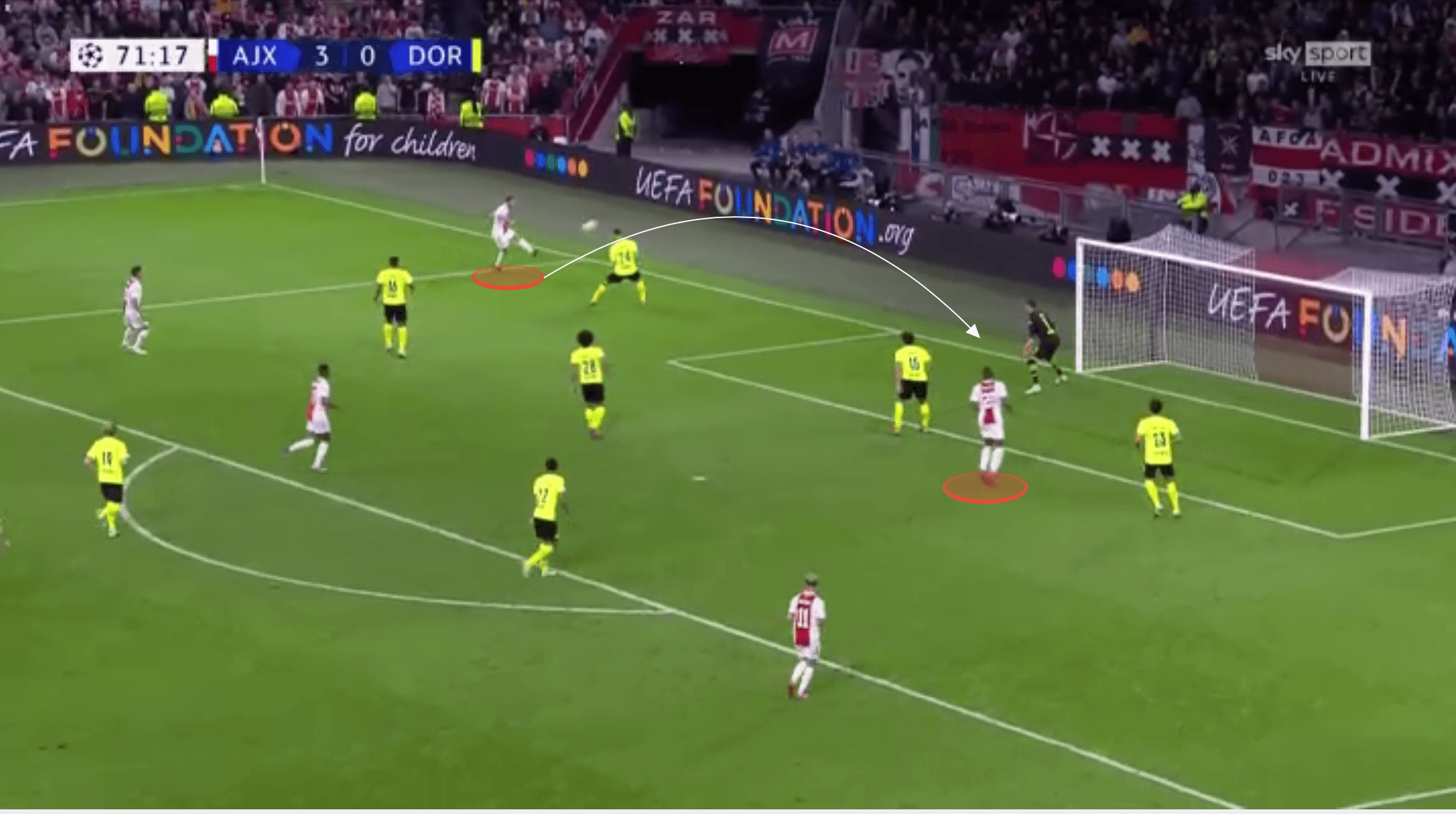 Haller would vary his positioning throughout the game, and found joy from dropping deep in the build-up phase. If Ajax were able to break lines quickly, Haller was successful in finding space by pushing forward with a late movement. We can see such a pattern occurring in the next two images, as a swift ball forward and a subsequent switch of play gave Haller the time to get forward and find space in a stretched out Dortmund defence. 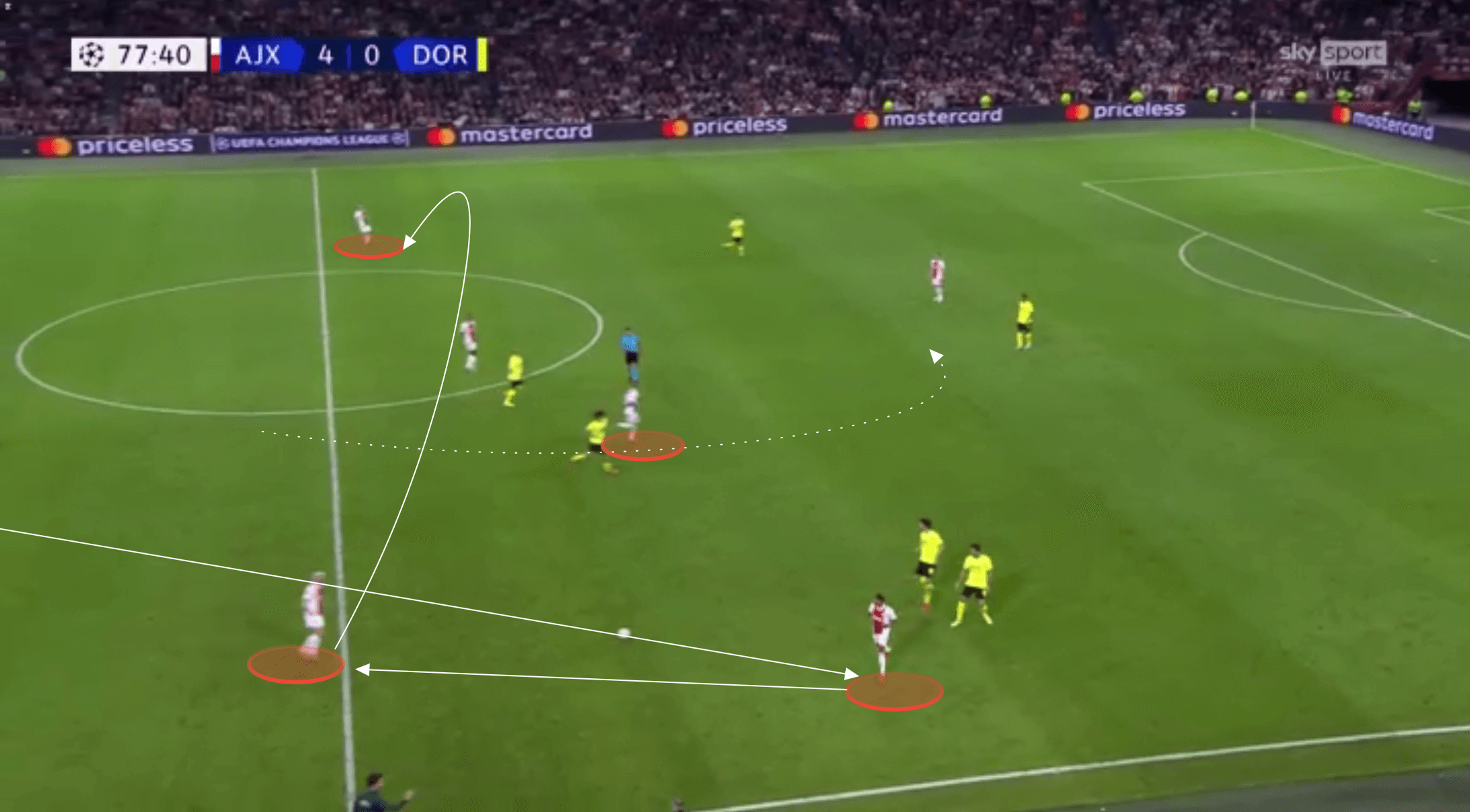 He was then able to time his run onto the through pass in the space behind without ever being properly marked. In the image below he was onside without being marked goal-side. 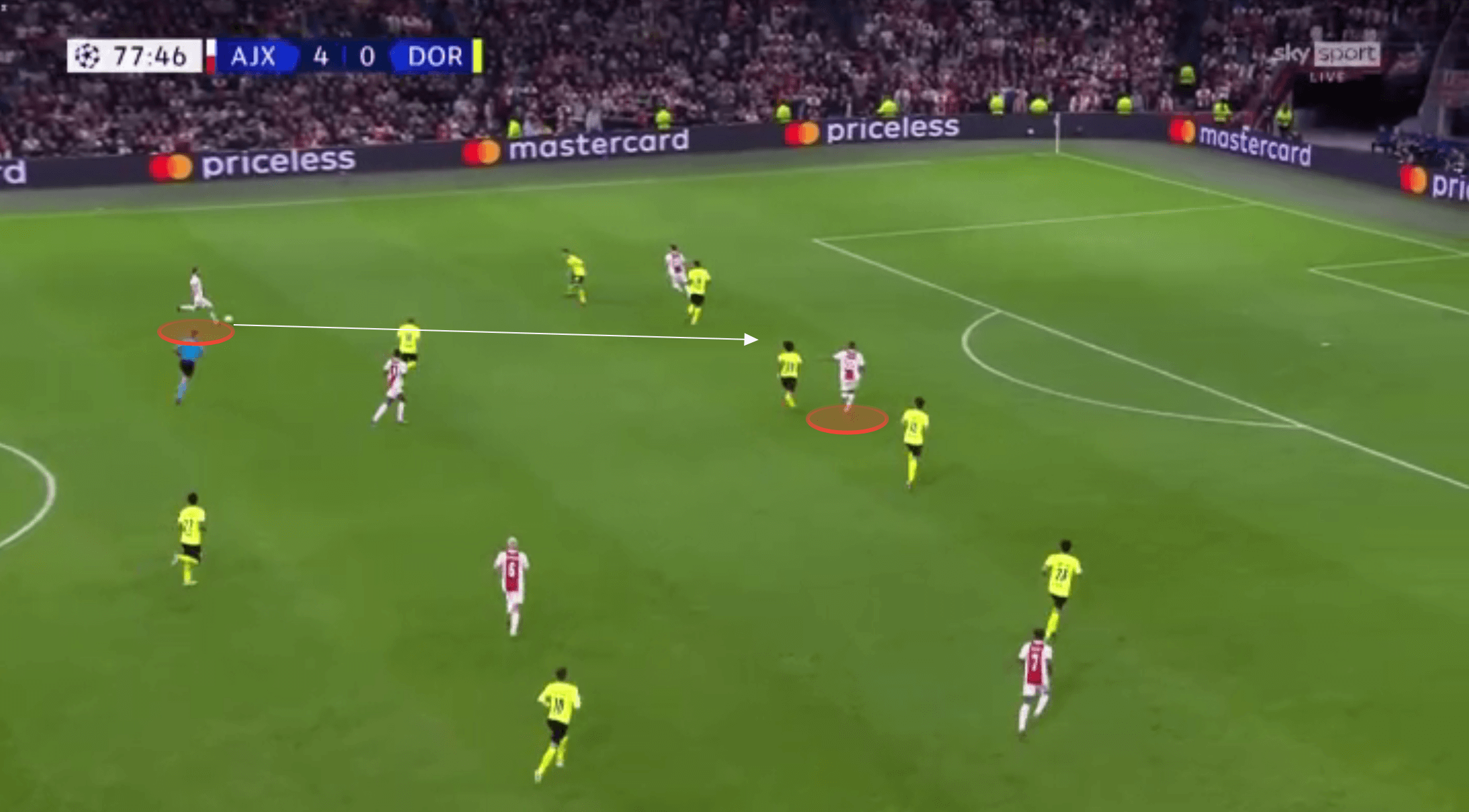 His hold-up play was impeccable throughout the game too. He was able to receive the ball in advanced positions and compete with Akanji and Hummels, delaying possession and laying the ball off to runners either side of him. But he also showed quality in deeper or wider positions. Haller would drift into these areas to get on the ball, and could draw Dortmund players towards him with some intensity. He didn’t show quality just playing with his back to goal but turning and facing the opponent before dribbling past them. 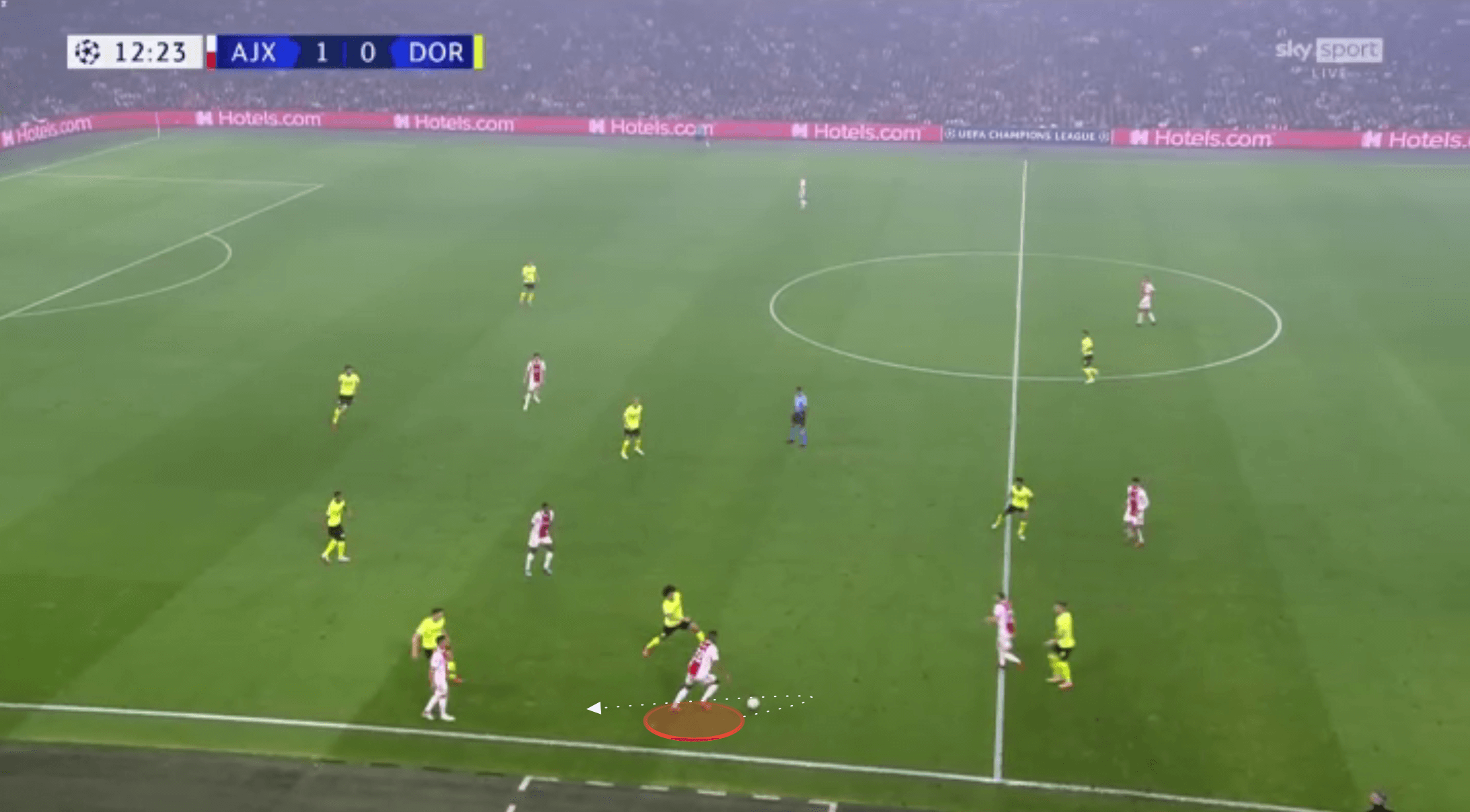 He then showed the awareness to find the runners off of him, playing clever passes into spaces his teammates had created for him with their own movement, dragging Dortmund’s defence into areas which allowed them to be played through. 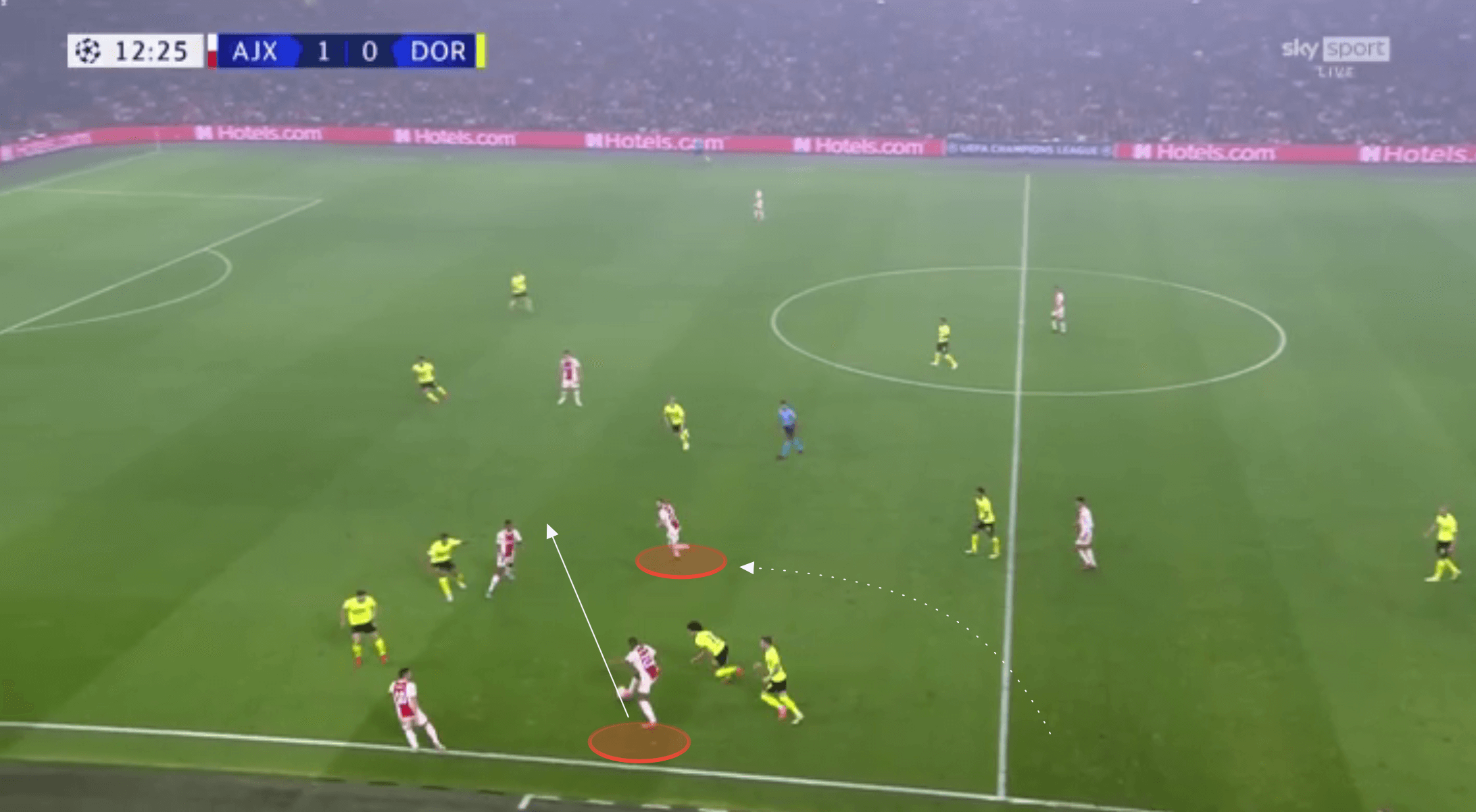 Whilst this was still just a group game, it was a statement win from Ajax who could potentially qualify with just one more win. Along with a good start domestically, where ajax currently sit atop of the Eredivisie, it looks like they are not only ready to push on from last season and continue to be a force at home in the Netherlands, but also be a threat on the European stage as they were three years ago.