Nowadays, it seems rather easy to find flaws in Barcelona. The Catalans are far from their invincible best and it’s showing almost every week. But all the issues aside, there have been some recurring problems pestering the squad for years now. Verticality and width, for one, have been the crucial missing pieces that would undoubtedly make the team much better than it is now.

And while hardly the only issue, the lack of wingers has played a role in that. The same can be said for quality attacking full-backs but wingers, in particular, have been rather scarce at the Camp Nou. But the La Liga titans might have a solution in their academy.

Ilias Akhomach is among the most exciting talents currently playing for their B and Juvenil A teams and one of the potential candidates to move up sooner rather than later. But how does he fit Barcelona’s tactics? This tactical analysis will give you a scout report on the youngster, identifying some of his main traits.

Ilias Akhomach is a 17-year-old winger currently plying his trade for Barcelona B. He is a left-footer who loves to cut inside and engage in a lot of dribbles against his marker(s). This dribbling ability and efficiency are probably what stands out the most about him. Akhomach’s close control, body orientation and mastery of small spaces is incredible for such a young and largely inexperienced player.

Similarly, he is quite strong on the ball overall. While not always the most adventurous and courageous passer, he does have it in his locker to playmake by distributing deadly threading balls. Sadly, as we’ll see further down the line of this analysis, this trait is not seen often enough to be a regular part of his arsenal.

One other thing that characterises Akhomach pretty well is the tendency to run with the ball and then combine higher up the pitch. The 17-year-old will often receive deep, engage in duels and dribbles and then aim to progress via his runs.

But Akhomach is far from a finished product. Of course, being so young, that fact doesn’t surprise anyone. His finishing is the biggest flaw in his player profile and this is directly tied with his decision making as well. But we’ll discuss all of that and more further down the line of this analysis.

Without much doubt, dribbling and carrying ability is key to understanding Akhomach’s profile as a whole. Despite being so young, the winger is showcasing incredible skill when taking on his man. The 17-year-old excels when isolated with his marker out wide as he can then use the pace and trickery that are in his arsenal.

But before further analysing his dribbling technique, it’s important to note when and where he engages in dribbles. Below, we can see his heatmap and action map, both of which will help us understand his general tendencies on the ball.

Akhomach is a left-footer playing on the right side of the pitch. As such, it doesn’t surprise that he loves to invert whenever possible. The youngster will receive wide and then decide whether he can cut in or keep the width, which is a great trait to have since it shows versatility in his profile.

Even though the maps suggest he has this tendency to drop deeper, it is interesting to note he won’t engage in dribbles too far into his own half that often. Below we can see four dribble maps from some of his most recent games that gave us a big enough sample for analysis. At times, his success rate can drop but is generally around 50%, which is more than good enough for a volume dribbler. 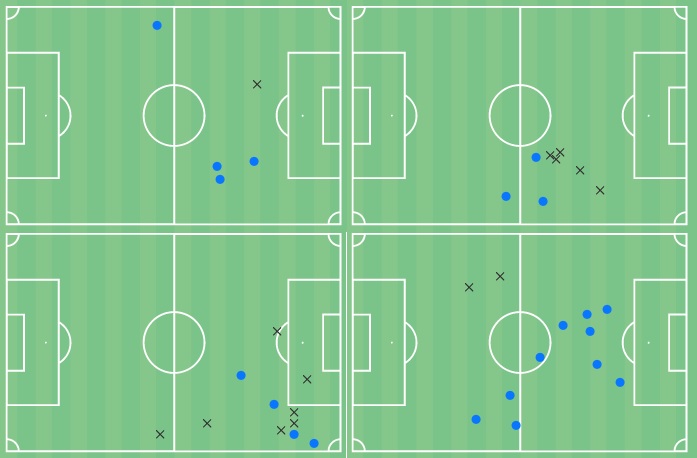 Generally, we can talk about two different zones that seem to be Akhomach’s favourites. Firstly, he will dribble when cutting inside from the flank just at the entrance into the final third. Secondly, he loves to engage the opposition in and around the entrance to the penalty area, where his markers have to be far more careful and less aggressive in trying to tackle the tricky winger.

Overall, while this may not be anything extraordinary, it does show us he thinks when and where he should engage in dribbles, which is good for such a young player. Of course, his dribbling isn’t perfect and just like many other volume dribblers, especially ones so young, sometimes he struggles with deciding when to release the ball quicker and when to keep going with his mazy runs.

But what about his technique? Generally speaking, I’ve noticed him use two clear weapons when dribbling – pure turn of pace and then acceleration on the ball and subtle body feints that often wrong-foot the defender. Let’s see both in action. Akhomach is a great progressive runner and we’ll often see him continue running with the ball after beating one or even multiple opposition players. 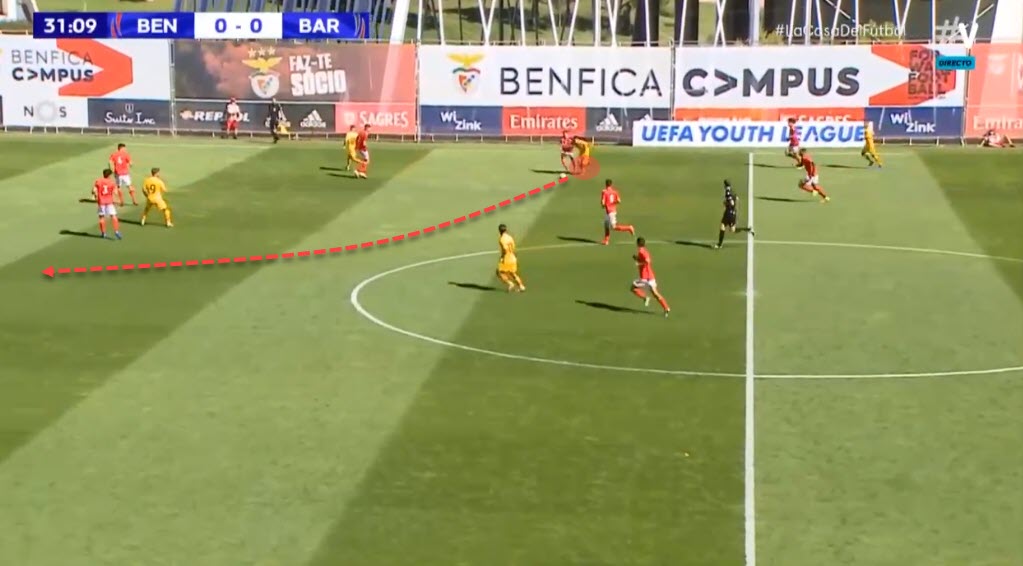 Above, you can see an example of his incredible turn of pace. Akhomach goes from standing still to fully sprinting past his marker within moments and it leaves multiple players behind soon after. One key aspect here is his link-up play too, which we’ll dissect more further down the line of this scout report.

But as a whole, and when he releases the ball on time, the 17-year-old makes good use of combining his dribbing with short-range sequences with his teammates. Next, we’ll take a closer look at Akhomach’s feints, which are a big part of his dribbling technique.

Below, you can see how he times the dribble perfectly. First, he waits for the marker to engage in a tackle and then suddenly feints his body, moving the ball to the other side when the defender can no longer stop his action. This enables him to immediately eliminate the other player and start the progression almost instantly. 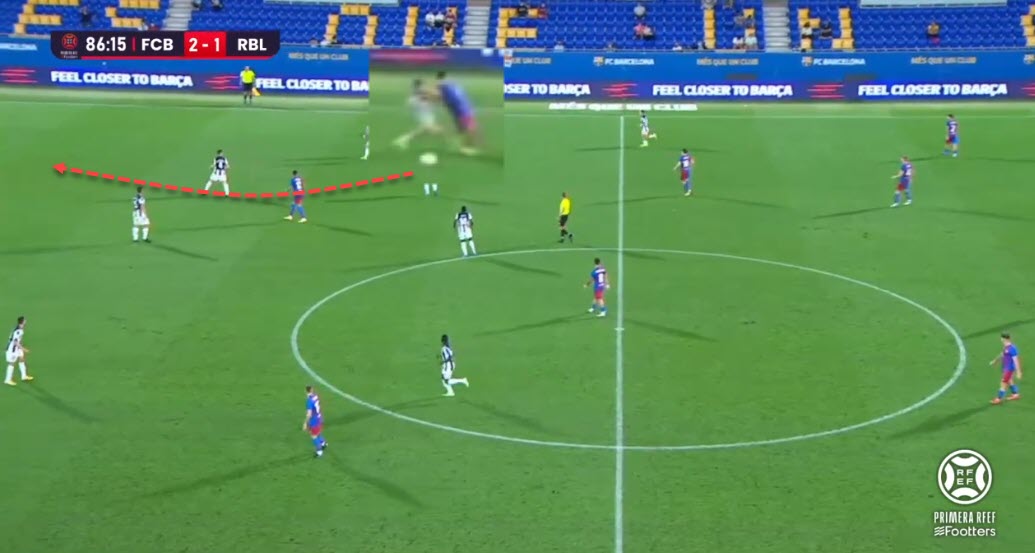 Again, he runs with the ball as much as he can, leaving multiple players behind him before ultimately being taken down near the penalty area. Let’s take another look at the same technique before wrapping up this section of our tactical analysis.

Akhomach once again waits for the defender to engage before quickly moving the ball to the other side. This quick change of pace and direction is what low centre of gravity dribblers are best known for but not many have the control to execute it this well. 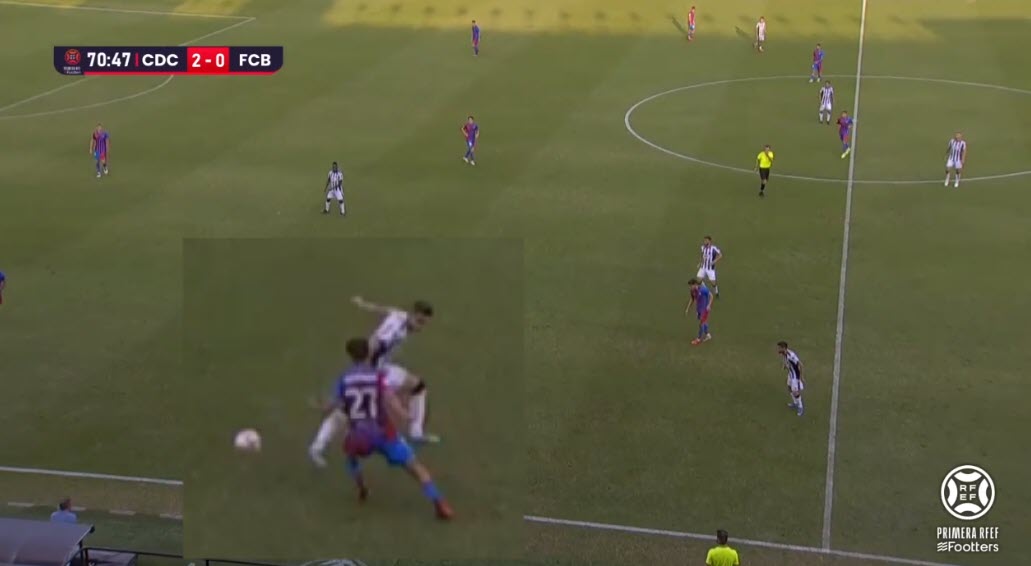 Once more, this move leaves the defender wrong-footed and the youngster can easily glide past him.

We’ve already touched upon Akhomach’s passing tendencies a little bit earlier in this tactical analysis. Overall, when he’s not actively looking for isolated duels with the opposition, the 17-year-old will mostly be used as a link-up player in a possession-heavy Barcelona side.

Below, you can see four of his more recent passmaps which provided us with a good sample to analyse. You can see that most of his passes are directed backwards or sideways. However, he is no stranger to an occasional threaded ball that can pierce through the lines of the opposition. 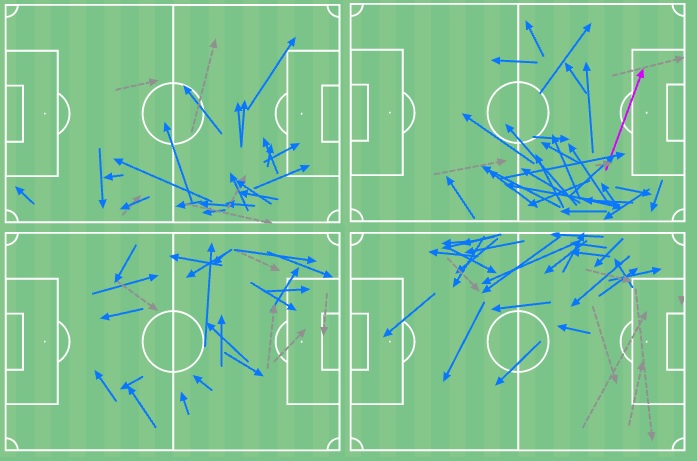 It’s pretty interesting to analyse that because as a whole, Akhomach won’t try that many riskier passes nor will he often be in a position to deploy them but when he is, it can be extremely effective. However, I have to be clear from the start that while he has the ability to produce such passes, they are still not a regular part of his arsenal.

As such, we won’t see him break lines and assist in that way often enough. But by looking at some examples, older and more recent, Akhomach’s left foot is more than capable of producing magic. He opens his body well and even more importantly, has the vision to see where the ball should go despite facing well-structured blocks.

Below, in a Champions League clash against Bayern Munich, the 17-year-old threads a beautiful pass that breaks multiple lines and finds the target in a dangerous area of the pitch. 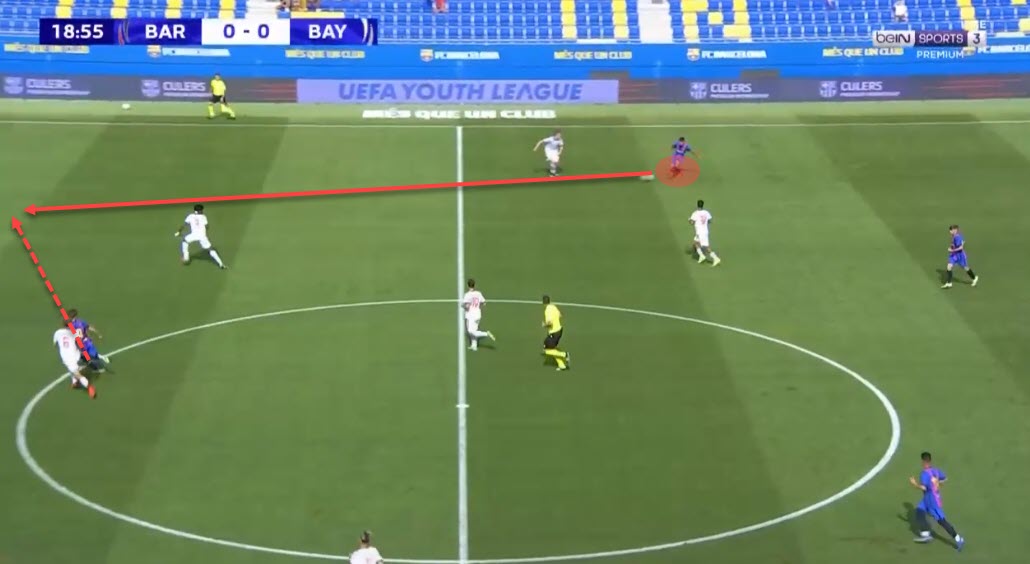 Interestingly, even by going farther back to his younger days, Akhomach has always been able to produce such passes, albeit also not on a regular basis. Below we see an excellent example of him not only executing an excellent pass but also having the vision to see the play unfold first.

A combination of skill, technique and vision that, if groomed properly, can become an incredible asset for his arsenal. 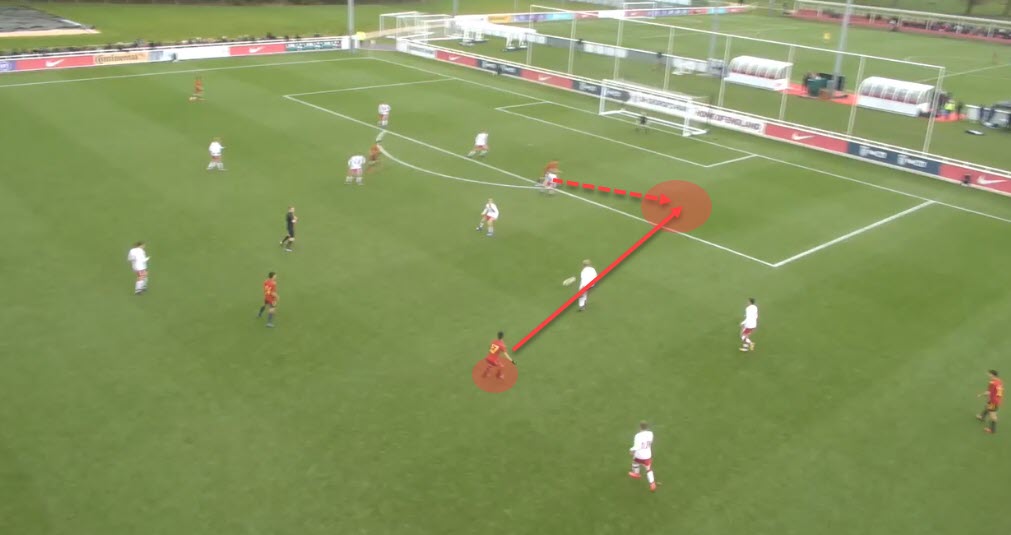 For a more conservative passer, developing such a skill would enhance his player profile to an incredible extent.

For such a young player, it doesn’t surprise that Akhomach still has some learning to do. No one is perfect and most of his flaws are easily fixable through training and right mentorship. Sadly, for a prolific winger, the 17-year-old is very erratic in front of goal and nowhere near a consistent threat for the opposition.

Yes, he is threatening whenever in possession and he can create things out of nothing. However, when it comes to his final product and shooting output, there’s a lot of room for improvement. Let’s start by observing his shot map for the 2021/22 season, using the data that’s available via Wyscout. 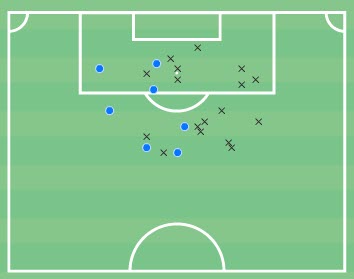 The first thing we notice are the locations of many of those shots. Akhomach seems to be taking a lot of shots outside of the box, which is not an inherently bad thing, but is not nearly accurate enough to warrant such quantities. Most of those locations yield low xG values, meaning he’s not choosing the optimal areas to shoot from.

Similarly, even when he does get into decent positions inside the penalty area, the youngster is simply not proficient enough to trouble the goalkeeper. Only three of the shots visualised in the box have hit the target and that’s despite some of them being from very central positions too.

One of the main reasons why his shooting is also not yielding much is connected to decision making. Akhomach is not exactly a volume shooter but it does seem like he’s shooting in situations where a better option is potentially available. The following image is a great example. 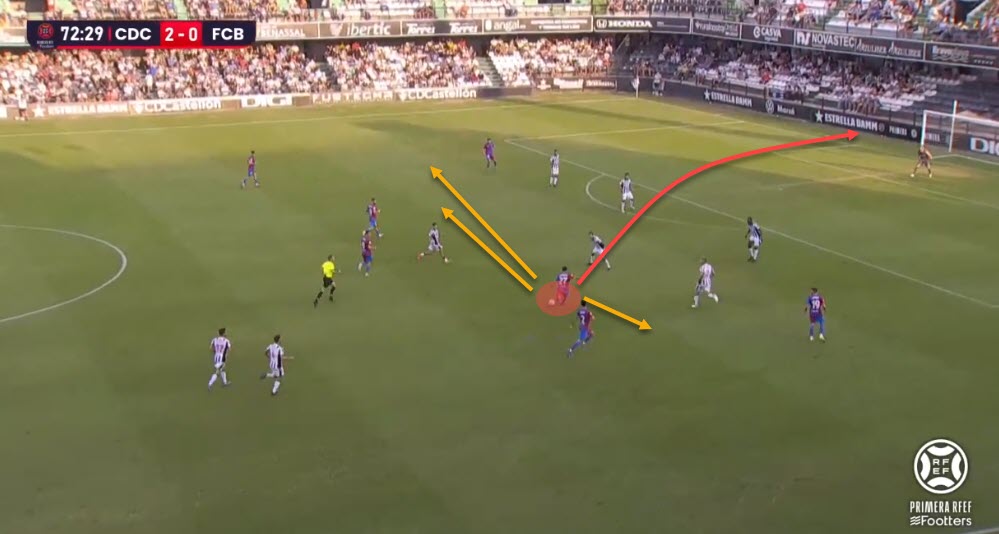 Even though not all presented options are easy to execute, they still offer better continuity to the attack than going for a long-range shot with so many bodies in front of him. As expected, the youngster fails to hit the mark and Barcelona’s attack breaks down.

Time will tell if Ilias Akhomach is truly ready to make a step up in the near future. The talent is surely there and Barcelona could definitely use someone of his calibre in the first team. His profile fits the tactics and the needs of the squad as he would add that chaotic, pace and 1v1 prolific nature Koeman was screaming for earlier in the season.

If he continues developing, there is no doubt Akhomach will eventually reach the spotlights of the Camp Nou. Here’s to that being sooner rather than later.