Frank Lampard, Dele Alli, Donny Van De Beek and Everton Football Club. At the start of the calendar year, these parties were not connected, but they all have followed the same trajectory. All four have, at a certain point, been successful and shone on the biggest stages; starting with Lampard – a decorated football career, and transitioning into management, Lampard excelled at Derby County. After nearly gaining promotion to the Premier League, he received an offer from what most would perceive to be his dream job at Chelsea, given their history together. The situation did not end well. After taking a year away from the game, Lampard’s love for blue remained – not the blue of Chelsea, but Everton, as he became their new manager in late January 2022.

Everton Football Club is a household name within English football – their league winning triumphs in the ’60s and ’80s are fondly remembered. Everton has also seen good times within the Premier League era, finishing fifth twice with David Moyes in the early 2000s and another fifth-place position with Roberto Martinez during the 14/15 season. Everton’s league table position dropped, but the Toffee’s fortune took a turn for the worst when Farhad Moshiri became the new owner of the football club in 2016. Moshiri substituted vision and strategy for money and senseless, which causes the demise of Everton, leaving them with overplayed talent and near relegation battles and a manager merry-go-round.

Dele and Donny Van De Beek; different paths, but the same on many levels. Both players share the separate memory of beating Real Madrid in the UEFA Champions League, as both know what it is like to be the hottest property around. Donny Van De Beek is Ajax from birth, while Dele, on his passage to the top, played at MK Dons in League One before making his move to Spurs. These two attacking midfielders transformed into superstars in the blink of an eye, but the tables can turn just as quick. Through the decline of Tottenham Hotspur, symbolised by the sacking Mauricio Pochettino, and poor squad building, Dele suffered and was played out of position, besides three consecutive hamstring injuries. Donny Van De Beek’s worst hours came with his initial move to Manchester Utd, where game time was limited because of Ole Gunnar Solskjaer’s love of Bruno Fernandes, which did not afford Van De Beek opportunities.

Now, this gang of once superstars in their own right are together in Merseyside – and it is clear to see all parties have seen the highs of football and now seeing the other side of the game. While everyone included is on a redemption tour trying to revitalise themselves, this could be the perfect marriage as everyone is hungry to retrieve the success they previously had – but football is never as simple as that.

In this tactical analysis and scout report, I will look into the players Dele Alli and Donny Van De Beek are, or were, as well as how they can both fit into Frank Lampard’s scheme he might implement at Everton, from his days at Derby and Chelsea.

As mentioned previously, Frank Lampard suffered setbacks during his second season in charge of Chelsea, ultimately resulting in him losing his job, but during the beginning of his tenure in West London – and his season in the EFL Championship with Derby, he showcased his tactical understanding and his ability to maximise players under his leadership. When delving into the tactical blueprint of Frank Lampard as a manager, right away it is clear to see Lampard has a favourable formation he likes to make use of either a 4-3-3 or a 4-2-3-1. With this being said, Lampard has made use of other formations in one-off games, such as a 4-4-2 diamond in the Playoff final and a 4-1-4-1. Regardless of the change of formation, he likes his team to have the ball and dominate play, rather than protecting their goal in a low block and allowing the opposition to take initiative. Lampard’s Derby averaged 56% possession per 90, which was the 5th highest in the Championship that season. In addition, Lampard’s Chelsea averaged over 60% possession per 90, being the third-highest total, behind Manchester City and Liverpool that season.

During the build-up, whether in a 4-2-3-1 or a 4-3-3, Lampard’s teams like to play out from the back, with a defensive midfielder dropping slightly deeper, supporting the centre-backs in possession. Either the outside central midfielders in a 4-3-3 or wingers in a 4-2-3-1 would drop into the channels during the first phase, making use of space created by the number six and full back. 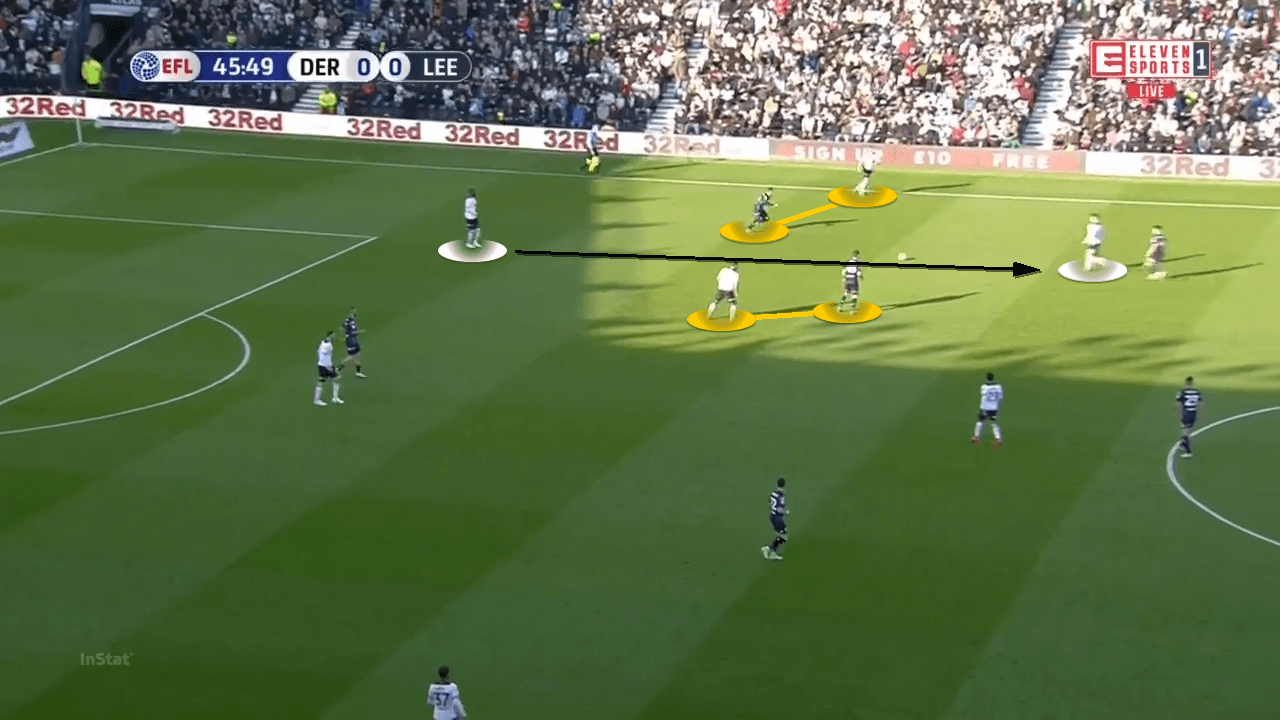 Lampard puts great faith in his full-backs to be key attackers when in possession, positioning them high up in the field. When utilising a 4-3-3, the two number eights within his midfield three would push forward and occupy the half-spaces, allowing them to create passing triangles in advanced areas. 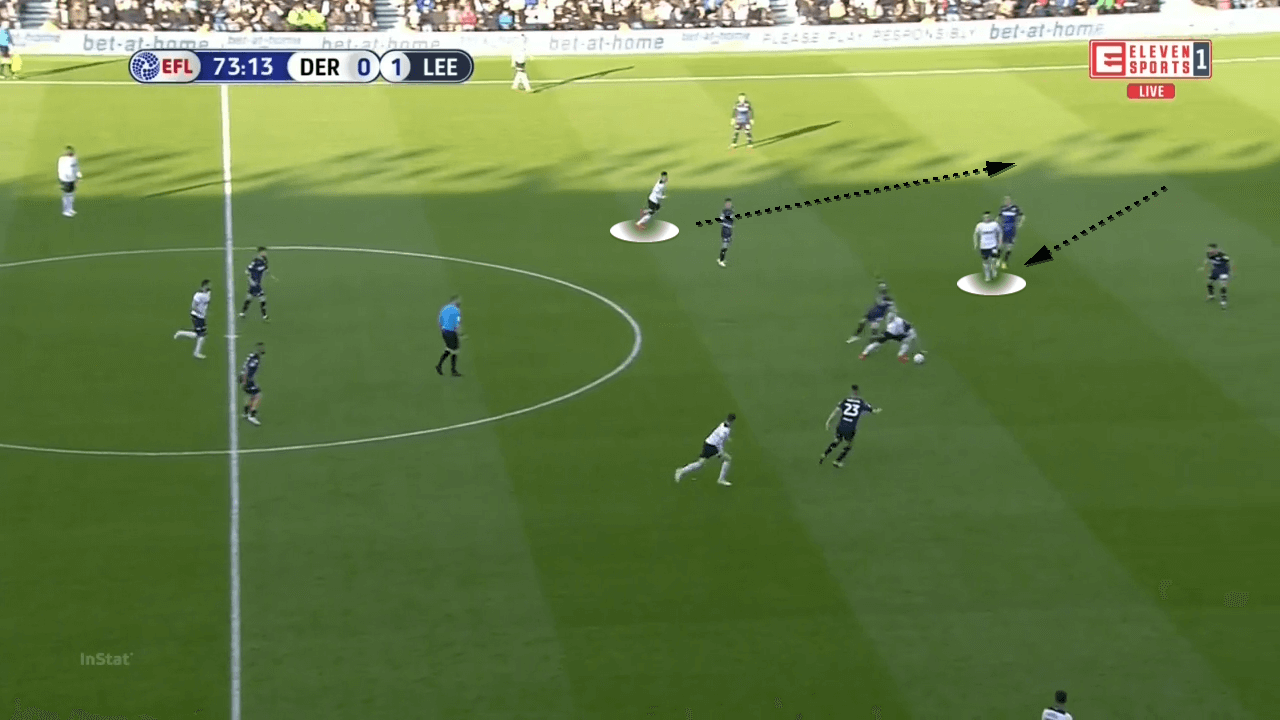 During the defensive phase, Frank Lampard likes his team to press aggressively from the front, condensing space for the opposition to play with. If their opponents bypass their press, either Derby or Chelsea would transition into a 4-4-2 mid-block.

Once in the correct system that places their strengths on a platform, the young midfielders are quality players on the European scene. During the height of their career, the attribute that put Dele and Van De Beek on the map was the off-ball movement and their at times supernatural understanding of space with their best work occurring in the penalty area.

Starting with Van De Beek, during his best form, he was stationed as a number ten, just behind Dušan Tadić in a 4-2-3-1 during his days in Amsterdam. Dušan Tadić was used as a slightly unconventional striker, as he would vacate the number nine position, and because of this, creating space for Van De Beek to penetrate. Donny Van De Beek was like Thomas Müller – the capacity to find space in the box was on full display during Ajax’s Champions League run and through the Eredivisie.

Here the ball is played down the left-hand side and Klaas-Jan Huntelaar is making a near-post run and in doing so, dragging the opposition defender away from the back post. Van De Beek acknowledges the movement made by Huntelaar and uses it to his advantage, making a perfect back post-run, resulting in a goal. 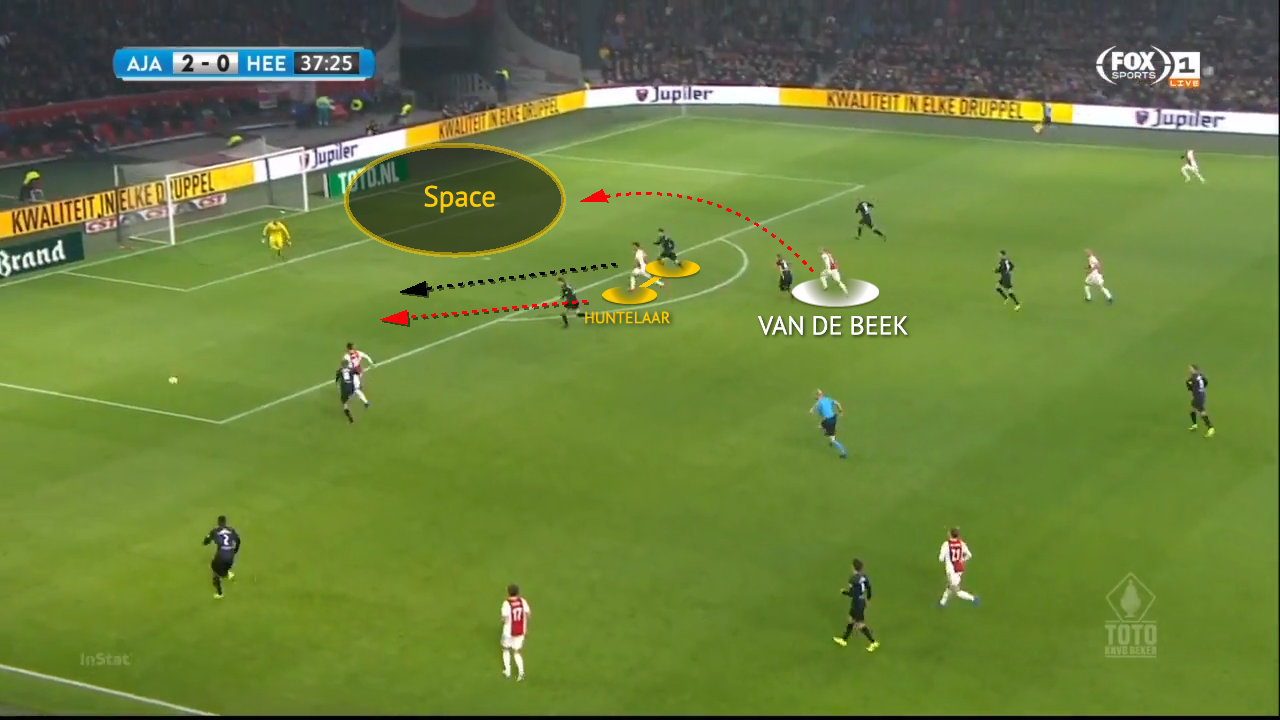 Regarding Dele Alli, the former PFA young player of the year has suffered over recent years because of mismanagement and the poor understanding of the type of player he is. It is clear to see that the former England international should be stationed as close to the opposition penalty area as possible, where he can attack space. Mauricio Pochettino understood Dele and was the one to get the best out of him during the 2016/17 season.

A perfect example of Dele being at his best was in the FA Cup semi-final against Chelsea. Christian Eriksen is in the right half-space. During this sequence, Dele makes a wonderful run in-between the two Chelsea defenders, blindsiding David Luiz. 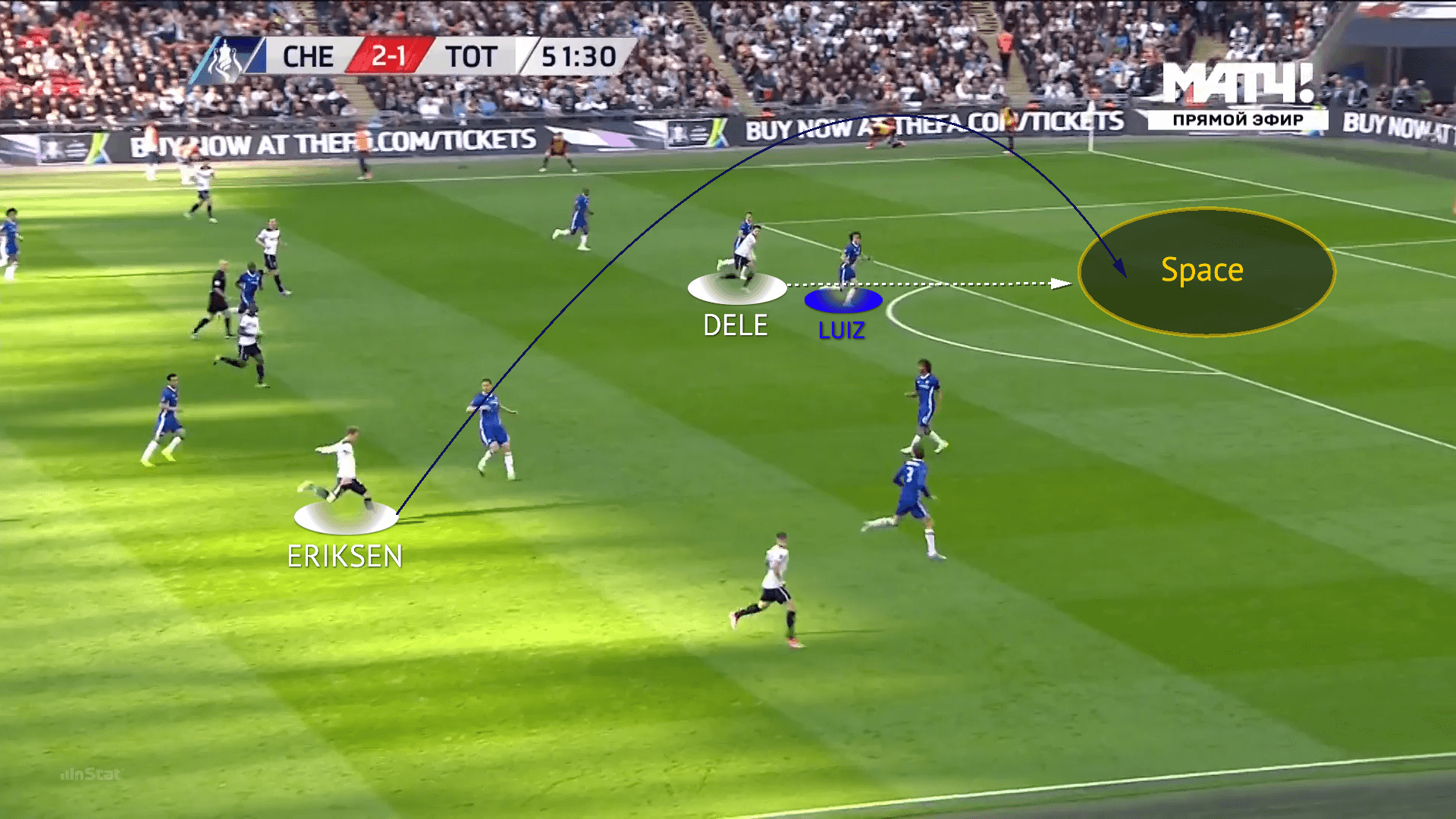 Van De Beek is more technical than Dele Alli, as he gets better ball retention and variation when passing, as when Dele plays deeper, he suffers because of his tendency to dwindle on the ball and not release quicker. Both players excel when near teammates, as they do well to combine, then suddenly make darting runs into the box.

Can Dele and Van De Beek play together?

With so much promise that Donny Van De Beek and Dele Alli have shown over the years, many Evertonians will wonder if the attacking pair can work within the same structure, within the mould of newly appointed manager Frank Lampard.

As noted, Lampard is quite fond of a 4-3-3 formation, and theoretically, Dele and Van De Beek could be used forward-thinking number eights, making late runs from midfield. While this tactic may have some upside, it may not be optimal when evaluating Everton’s squad. If Frank Lampard wants to use Dele and Van De Beek as almost free tens, similar to Kevin De Bruyne and David Silva under Pep Guardiola at Manchester City a few years ago, Everton’s lack of a true anchoring number six could be costly.

In addition, in his later years at Spurs under Nuno Espírito Santo, Dele was played in a central midfield in a 4-3-3. While out of possession, he showcased his excellent work rate and ability to win back the ball; in possession, he struggled due to him not being able to drive forward at long distances, as well as his technical deficiencies. Van De Beek is slightly different, as he does not suffer when on the ball, due to him being taught through the Ajax school of thought. While this is the case, number 8 is still not optimal for Van De Beek, showing that the 4-3-3 may not be plausible. We can echo this same notion when discussing placing both attacking midfielders into a 4-2-3-1 or a 4-4-2- diamond formation, another one of Lampard’s favourites. For this system to be utilised effectively, Dele would have to be deployed behind the striker, while Van Der Beek would sit in the double pivot next to Abdoulaye Doucouré or Allan. But again, this is not ideal for Van De Beek playing slightly deeper.

While the previous choices may be at this point a tactical no go at face value, all is not lost for the pair playing together. Frank Lampard’s first match as Everton manager was against Brentford in the FA Cup, earning himself a place in the fifth round after a 4-1 win.

During Everton’s demolition job against Brentford, Lampard set his team up using a 3-4-3. This use of a three at the back formation is important, as it could be a true gateway for both Dele and Van De Beek to play within the same team. To accommodate both, instead of a 3-4-3 with conventional wingers, Lampard could slightly adjust and make use of a 3-4-2-1 formation, with Dele and Van De Beek as the two. This system could optimise the skills of the pair, especially Dele Alli, as he can find space in between the lines when stationed within the inside left ten positions. Also, Dele can play with Dominic Calvert-Lewin; the England striker is a mobile target man, able to get his head onto long balls during goal kicks and from crosses. Because of his danger, opposition defenders gravitate towards him, leaving spaces that both Dele and Van De Beek can exploit.

This idea of a dual ten system can also be employed using a 4-2-2-2 formation. Both players occupy central zones, interchanging with teammates, while still being close enough to the goal where they can still make a tremendous impact. Both Van De Beek and Dele have never been creative hubs when at their peak, so for both of these systems to work, the creative burden with left on the full-backs/wing-backs to massively chip in with crosses from the wide areas, and new signing Nathan Patterson and Vitaliy Mykolenko could play a huge part.

Everton Football Club, Dele Alli, Donny Van De Beek and Frank Lampard can all be viewed in the same light. Once upon a time, all four entities were gained success, which didn’t look would fade away, but here we are. All four are banded together, looking to get themselves back on track, but questions have to be asked, can all four succeed together? Discussing club culture and finances is for another article, but from a tactical standpoint, Frank Lampard will have to tinker from his usual game plan, about formations, but with a quality player such as Dele Alli and Donny Van De Beek, with a chip on their shoulder, Everton could be onto something.