This previous Sunday Borussia Dortmund faced Bayer Leverkusen in a Bundesliga fixture with the hosts having an eight-point lead over their visiting rivals going into this tie. In a game that always seems to produce goals, Leverkusen surprised the home side with a blistering first-half performance before then picking them apart late on in the game to put to bed any form of Borussia Dortmund resurgence.

This tactical analysis and scout report will provide an analysis of some of the key tactics seen in this fixture.

Borussia Dortmund lined up in a 4-3-3 with Gregor Kobel in goal and a back four of Raphael Guerreiro, Dan-Axel Zagadou, Manuel Akanji, and Thomas Meunier. This defence had certainly seen better days, and with plenty of talk already about both Akanji and Zagadou’s contract situations at the end of this season, and the upcoming arrival of Nikals Sule, this performance would have done little to convince the Dortmund board to produce lucrative contracts for their current pairing, certainly in the case of Zagadou. However, whilst Akanji has proven to be the far more consistent defender, and Dortmund would be wise to keep him at the club if they can, this was an off-day for him at centre-back.

In front of this backline sat Axel Witsel, with Jude Bellingham and Julian Brandt paired ahead of him. Thorgan Hazard and Marco Reus played either side of Donyell Malen in a front three.

For Leverkusen Lukas Hradecky missed the game due to Covid, meaning Lennart Grill made his first Bundesliga appearance of the season. Their back four was made up of Jeremie Frimpong and Mitchel Bakker at right-back and left-back, respectively, whilst Jonathan Tah and Piero Hincapie played at centre-back. In midfield, Robert Andrich and Kerem Demirbay were paired in a double pivot, with the former scoring an outstanding free-kick, whilst Florian Wirtz played in front of them. Karim Bellarabi and Moussa Diaby played on the wings with Patrik Schick starting at centre-forward. 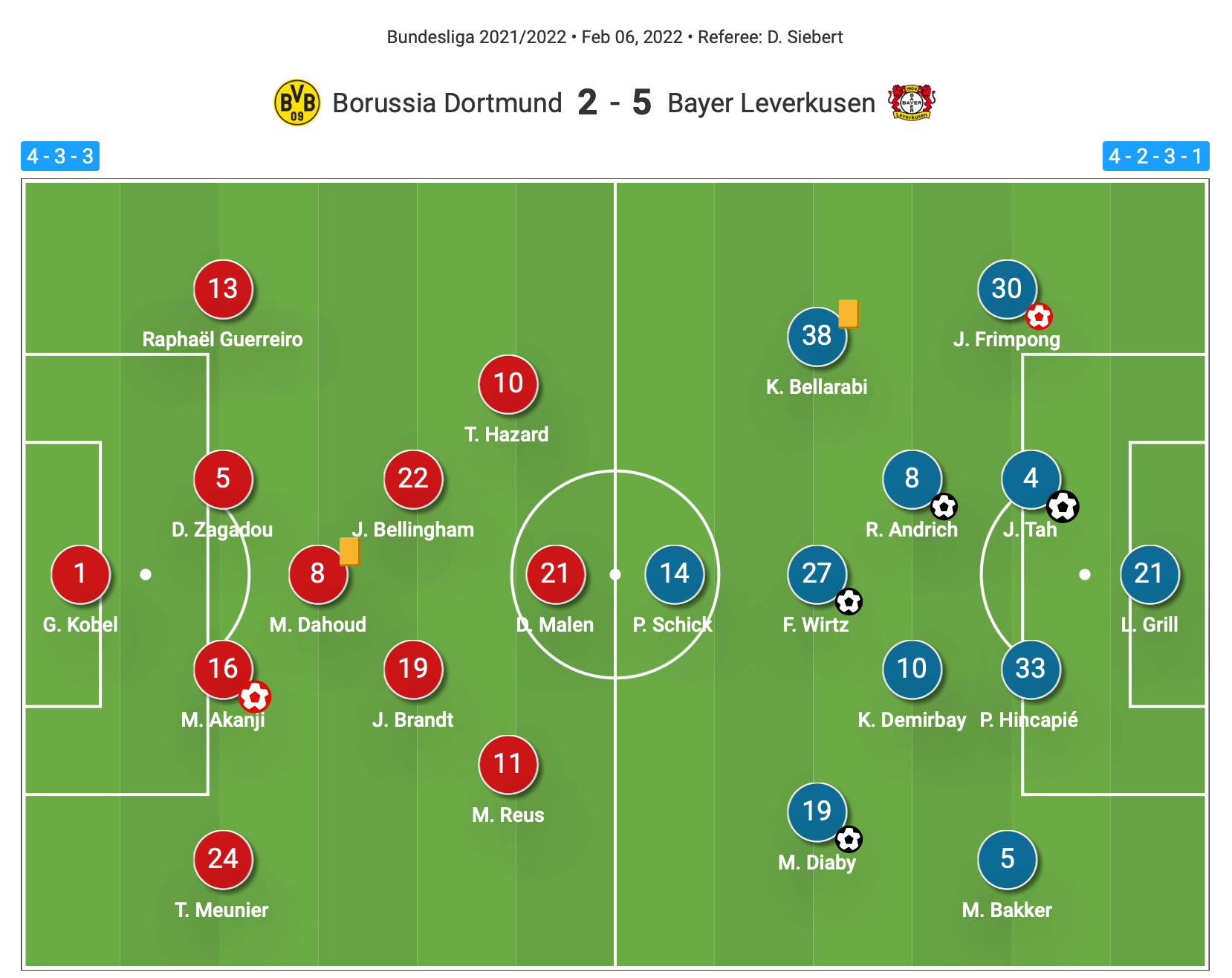 Goals in the game came from Jeremy Frimpong (OG), and Steffen Tigges for Dortmund, whilst a Manuel Akanji own-goal, and finishes from Florian Wirtz, Robert Andrich, Jonathan Tah and Moussa Diaby gave the goals for Leverkusen.

Leverkusen put Dortmund’s defence to the sword throughout the game, with the home team’s defence looking leaky from the outset. They were consistently caught either out of shape or short of protection from their midfield.

There were times where Leverkusen clearly sought to exploit this on the transition, leaving players forward.

Gerardo Seaone allowed his wingers to tuck inside with some consistency and encouraged his full-backs to push on, albeit not at the same time.

The following image shows such an example with a turnover occurring in Dortmund’s midfield. We can see how they immediately had a 4v4 ahead of the ball, with Bakker pushed high on the left-flank. 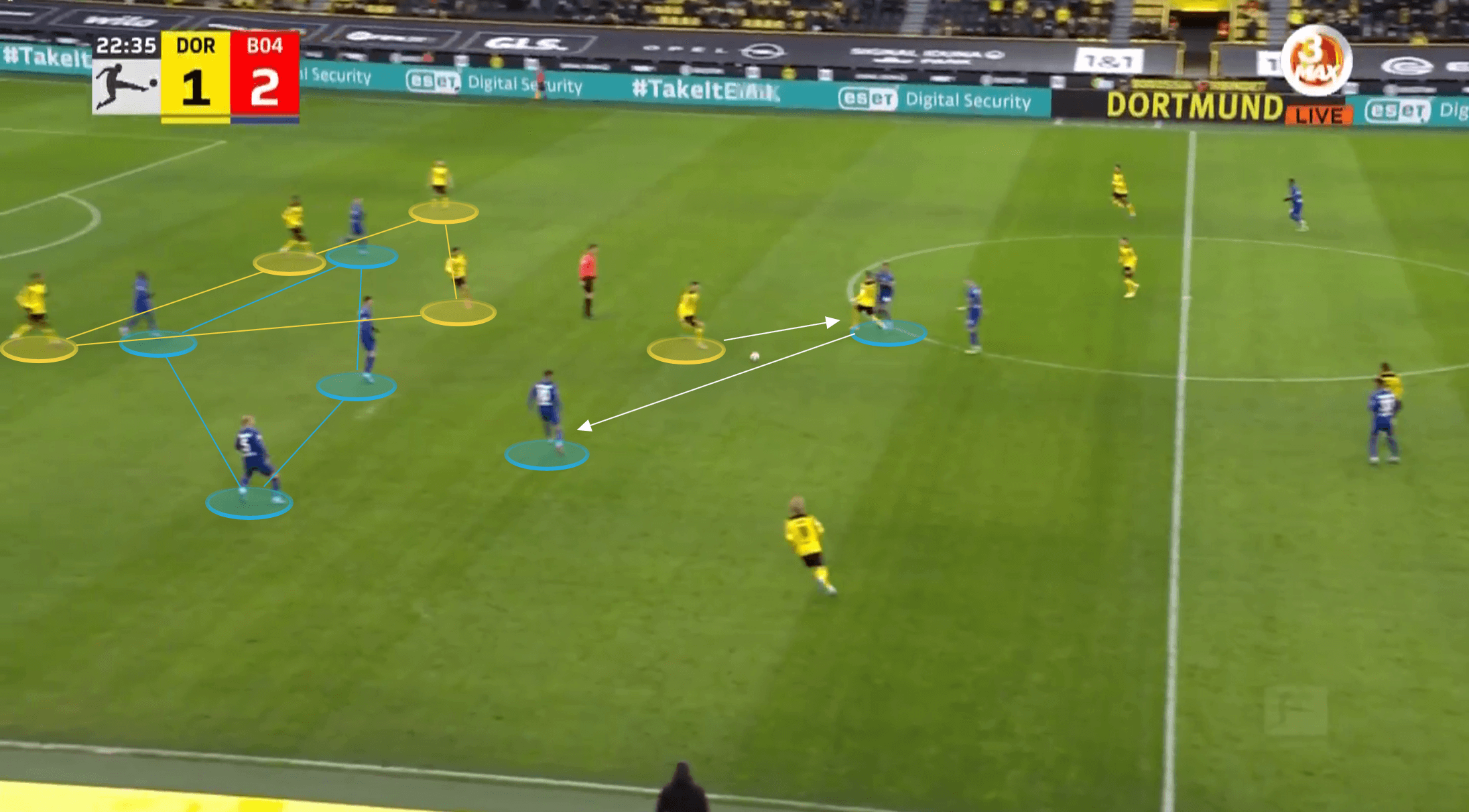 By matching these players up narrowly in central positions against the Dortmund defence, Leverkusen could take advantage of quick breaks on the transition. There was space outside Dortmund’s narrow back line, but if the ball-carrier could drive forward and drag a defender slightly out of this narrow block, it opened up space in behind for an easy through pass into this space.

Florian Wirtz’s goal and Bayer Leverkusen’s second goal of the game came from such a moment. However, there was also some truly terrible defending from Dortmund’s backline in this moment, allowing Wirtz to simply run through onto the through pass almost unmarked, despite Akanji’s close initial positioning to him. 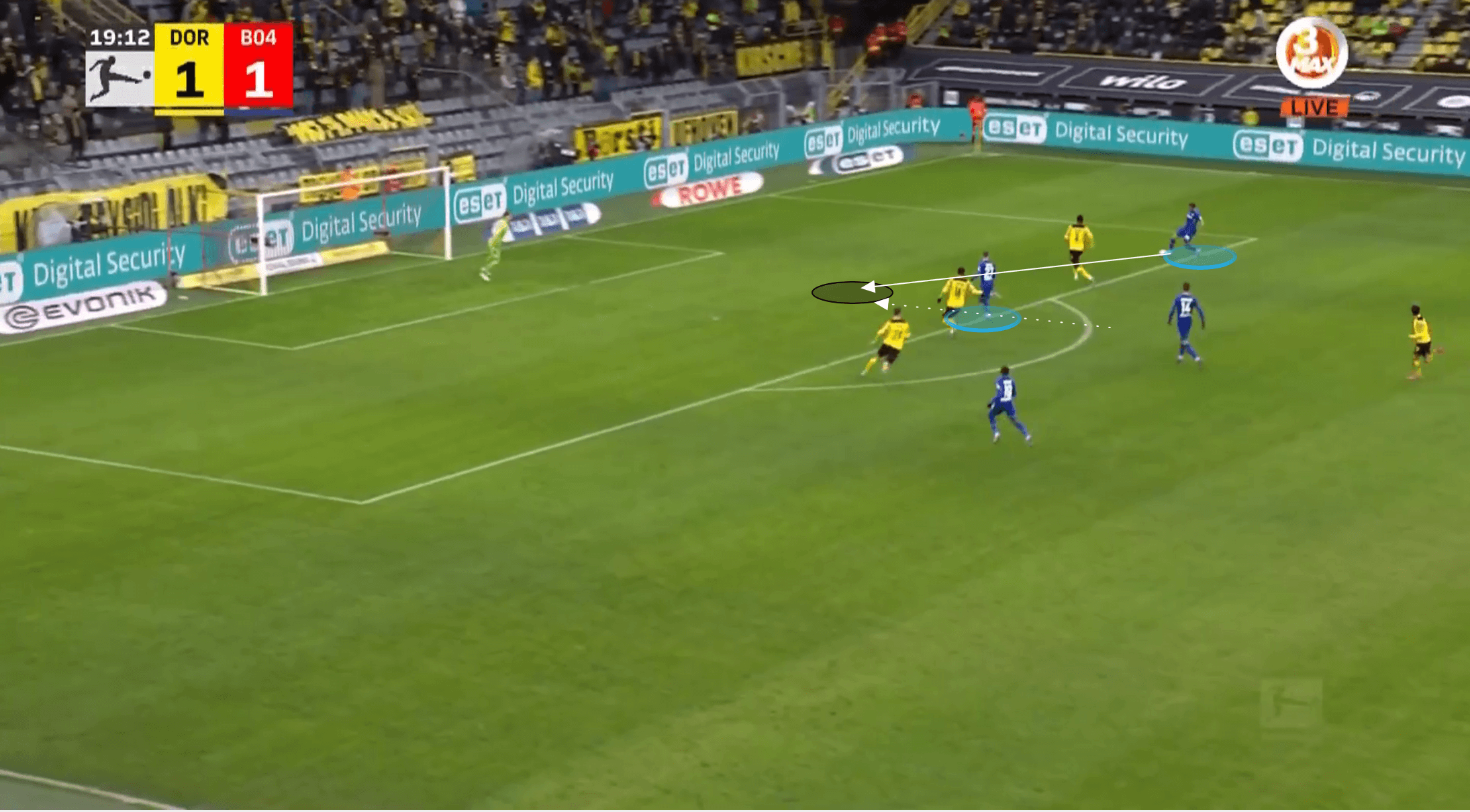 Leverkusen were direct on the ball, and were very quick to work the ball forward on a turnover, particularly with the ball deep inside their half. The anticipation of Leverkusen’s attackers to push forward immediately on the turnover caught Dortmund cold, with Witsel often left unsupported by Bellingham and Brandt who would push forward freely. If either Meunier or Raphael Guerreiro were drawn forward, or both even, then this left Dortmund extremely short at the back, and Leverkusen took full advantage of this. The initial move to begin the previous move came from such a setting.

The following image highlights how quickly Leverkusen not only got the ball forward but how easily they overran Dortmund’s light central cover. 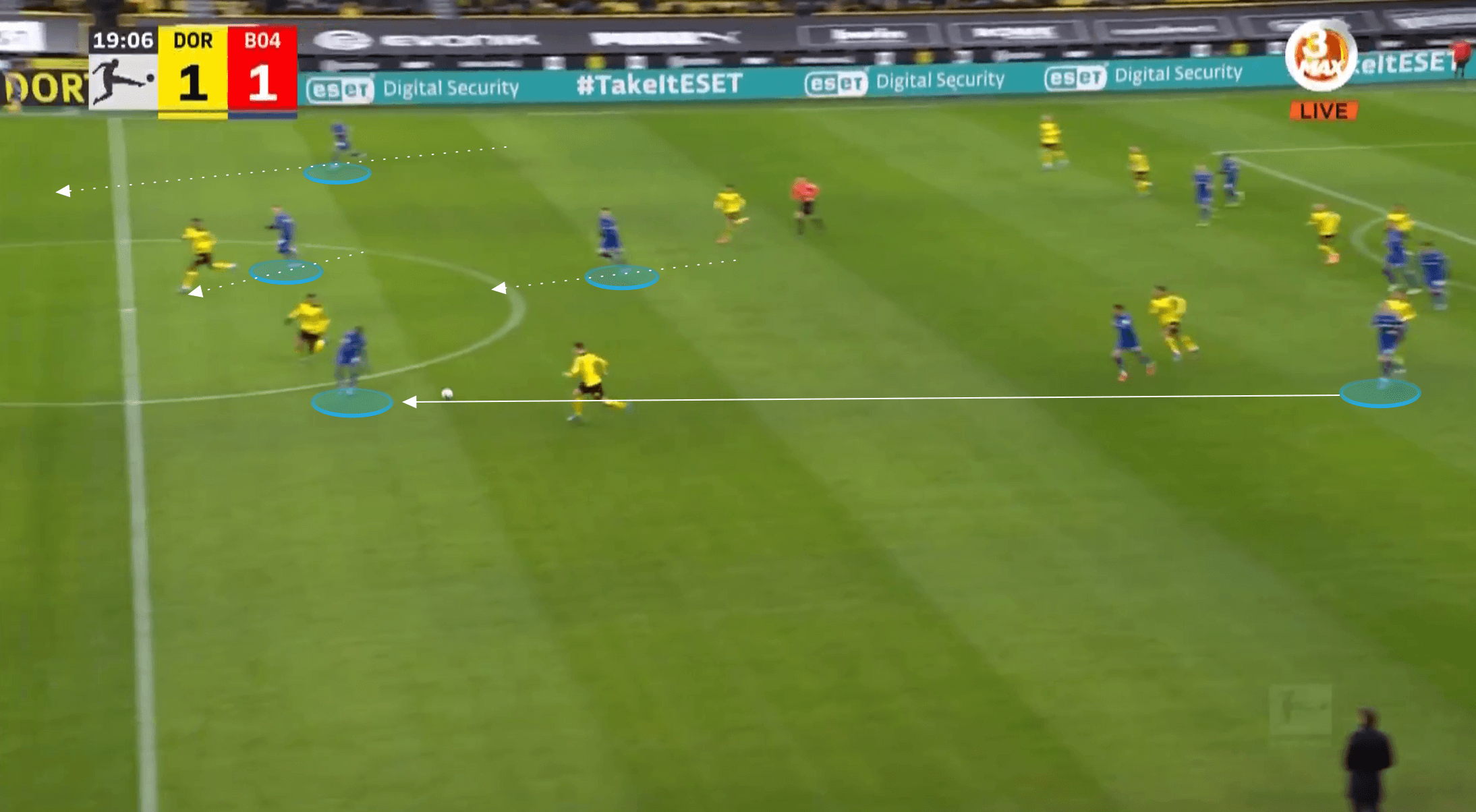 Dortmund’s runs in behind

Despite the scoreline Dortmund initially came out better in the second half, and perhaps had they scored first in this half they may have changed the outcome of the game, with the scoreline poised at 3-1 at the interval.

Dortmund looked far more purposeful in possession in the second half, and whilst they had periods of developed possession, they would work the ball until an opening presented itself in behind. When such a gap occurred they would look to immediately hit this space. Malen would drop out of the centre-forward position and in doing so leave plenty of space between Leverkusen’s centre-backs to exploit with through passes.

We can see such a pattern occurring in the following image where the direct pass straight through the centre of the pitch was available due to Malen dropping deep and tempting Tah forward. 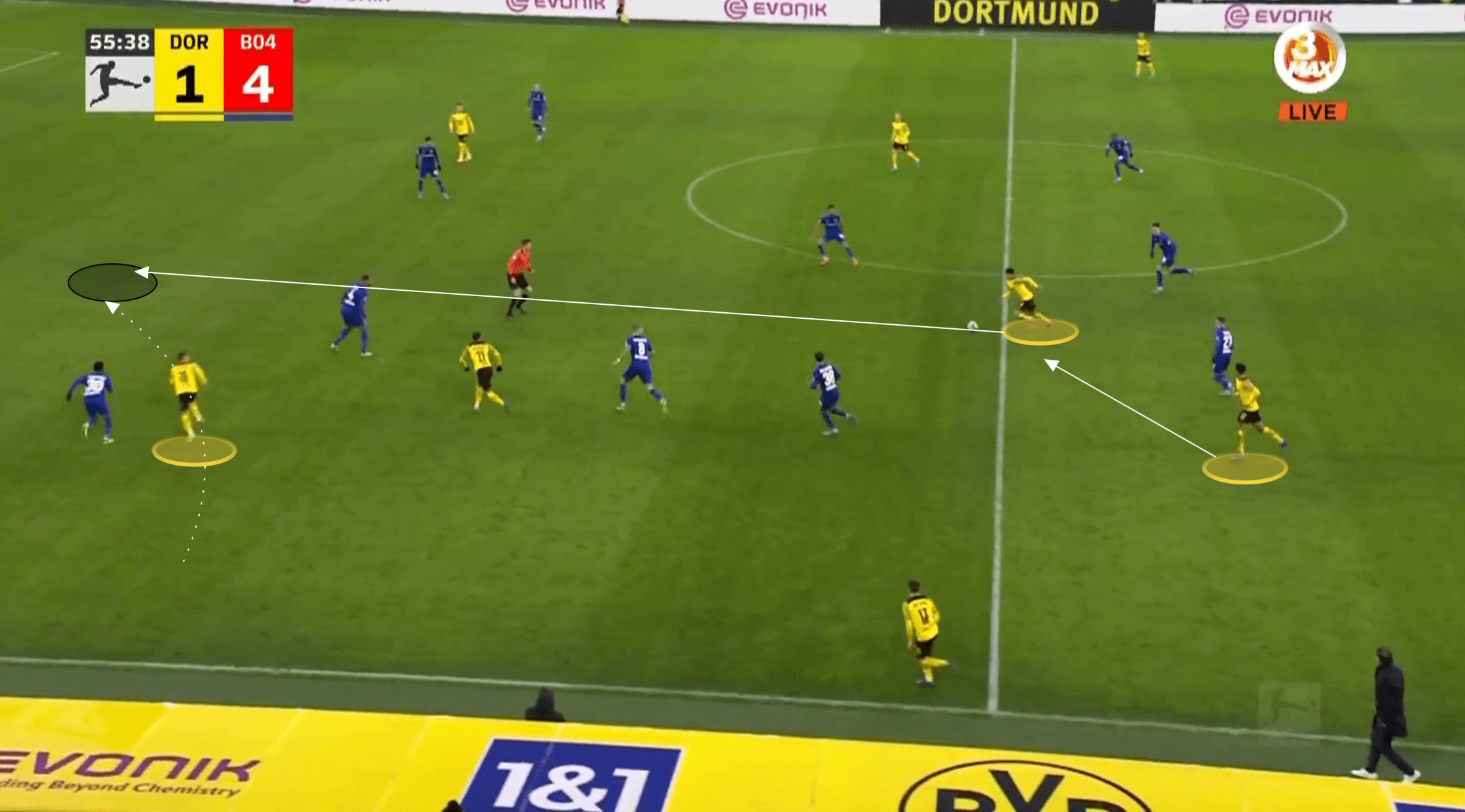 Even after Leverkusen’s fourth of the game there were still opportunities where Dortmund could have capitalised on chances from these kinds of openings and yet either were unable to take said chances or didn’t see the opportunity in the first place. We can see Brandt cutting inside here, admittedly with excellent control and skill, despite the opportunity to play a similar straight through pass in behind like in the previous image. 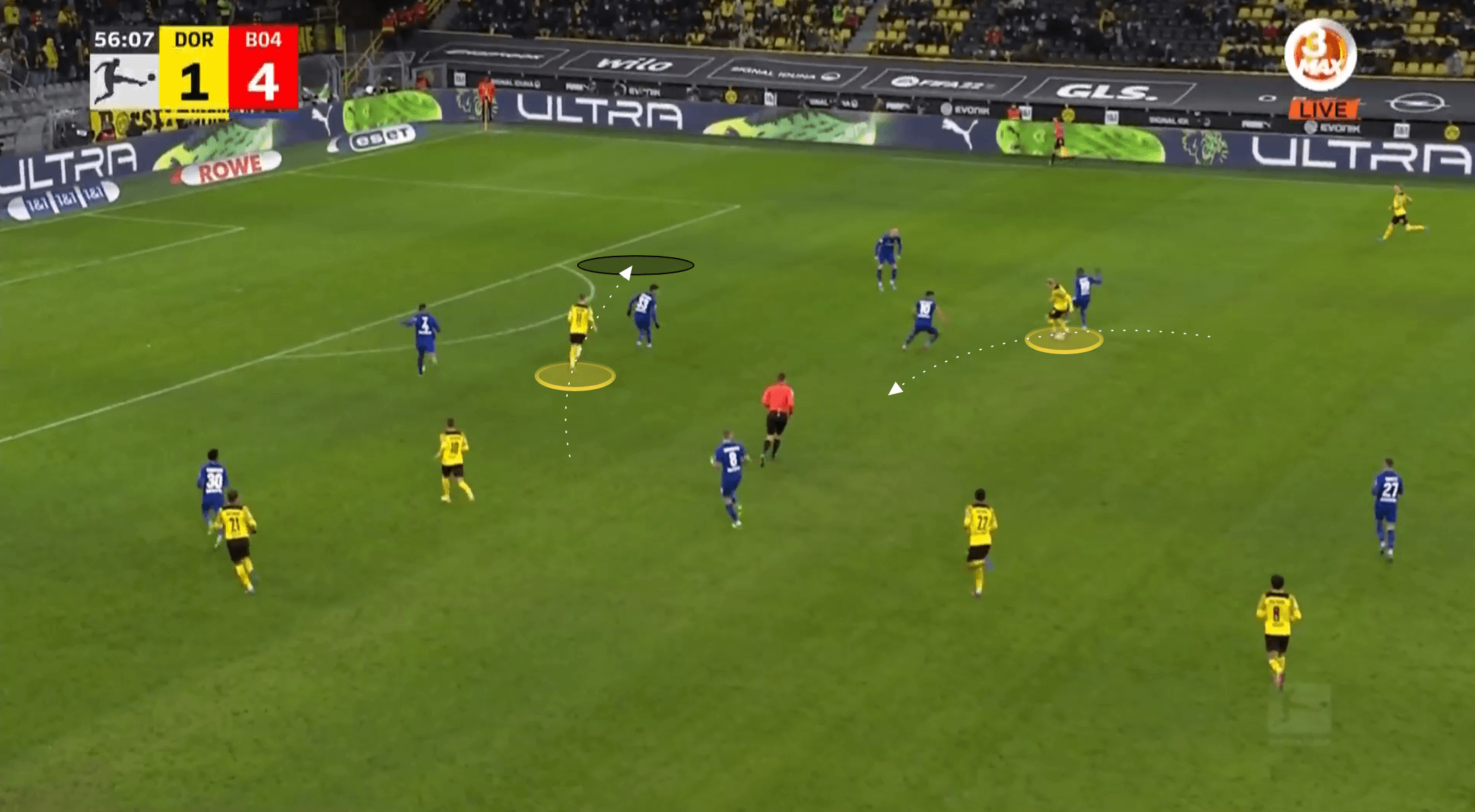 Dortmund’s second didn’t come until the final moments of the game, with Steffen Tigges slotting home from close distance, with the chance coming from a ball in behind from deep, albeit slightly more hopefully played than the examples in this section.

Even at 4-1 Dortmund were looking to break lines and continue to create chances. Perhaps with a much better defensive showing they could have got some form of result in this fixture. A chance in the 62nd minute was a glimpse of quality football, where they carved Leverkusen open, with Akanji starting the move with a firm pass breaking through Leverkusen’s front line and midfield and playing into Brandt’s feet. 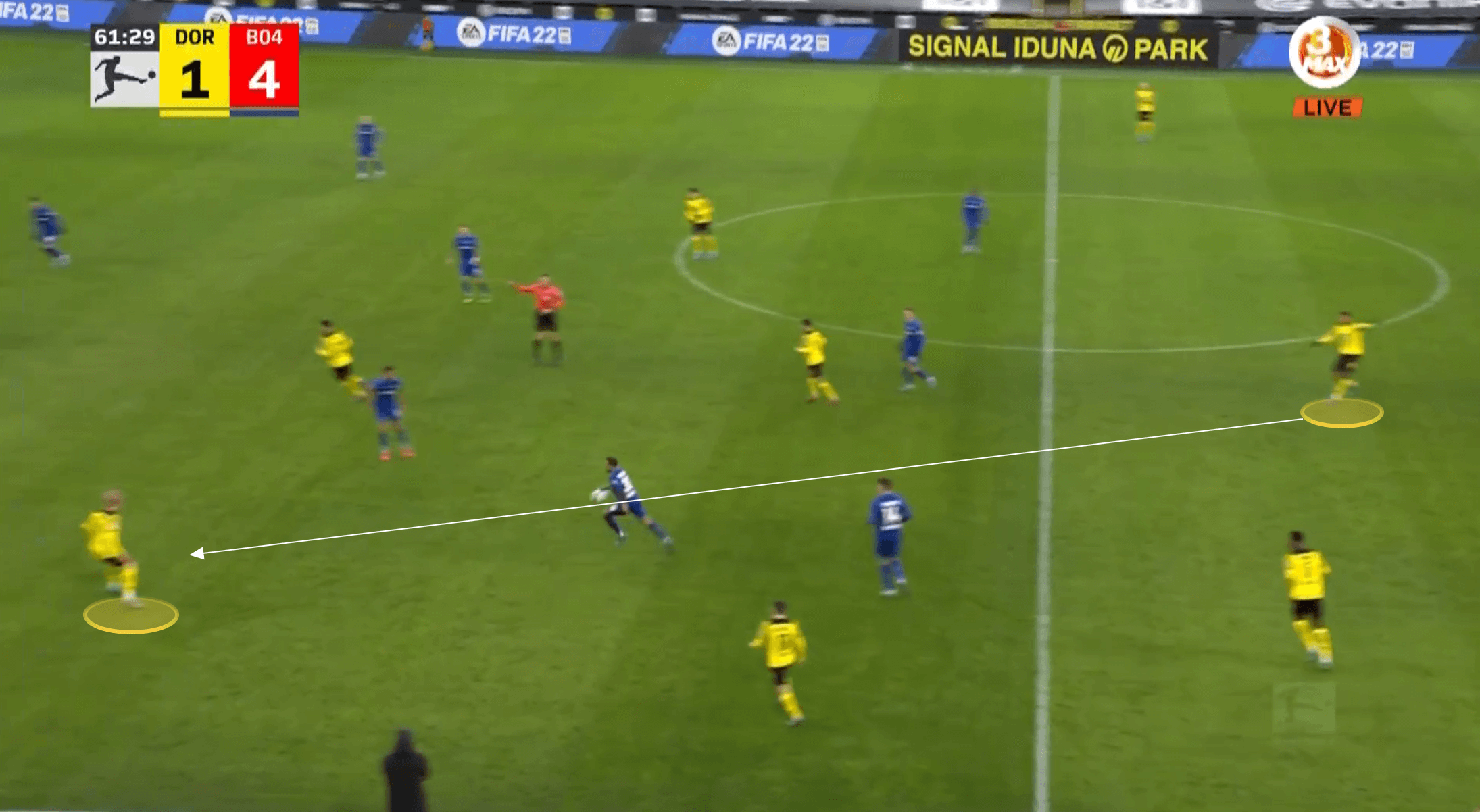 A smart pass inside into Bellingham, and once again there was space behind Leverkusen’s backline with Malen accessing this space with Reus on the outside. 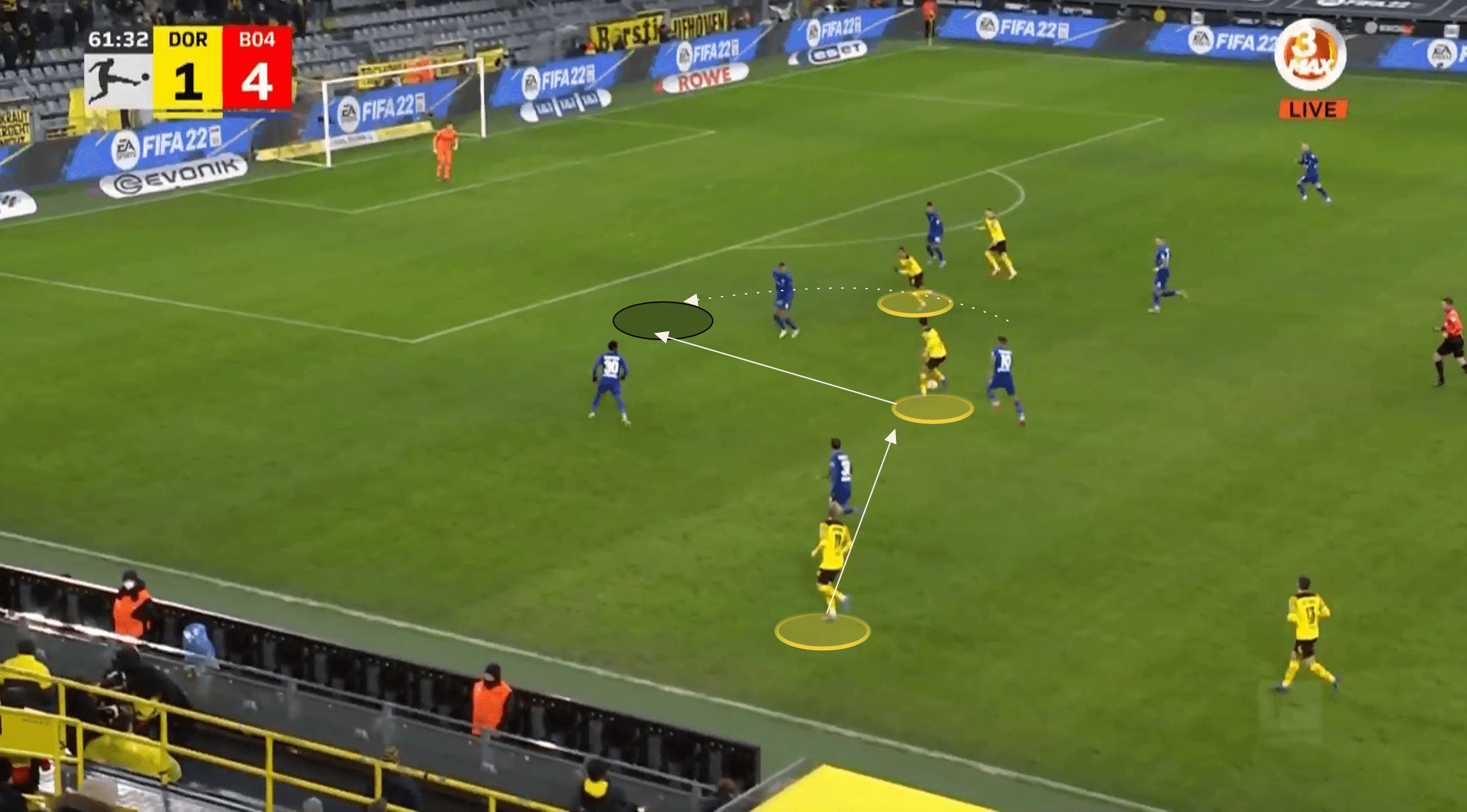 In this instance, Malen was unable to get the ball across goal and create the chance for Reus. However, for Dortmund’s second, even though the game was well and truly gone by this stage, exciting youth prospect and second-half substitute Youssoufa Moukoko was able to make the same run as Malen but this time find his open teammate with the pass across goal. 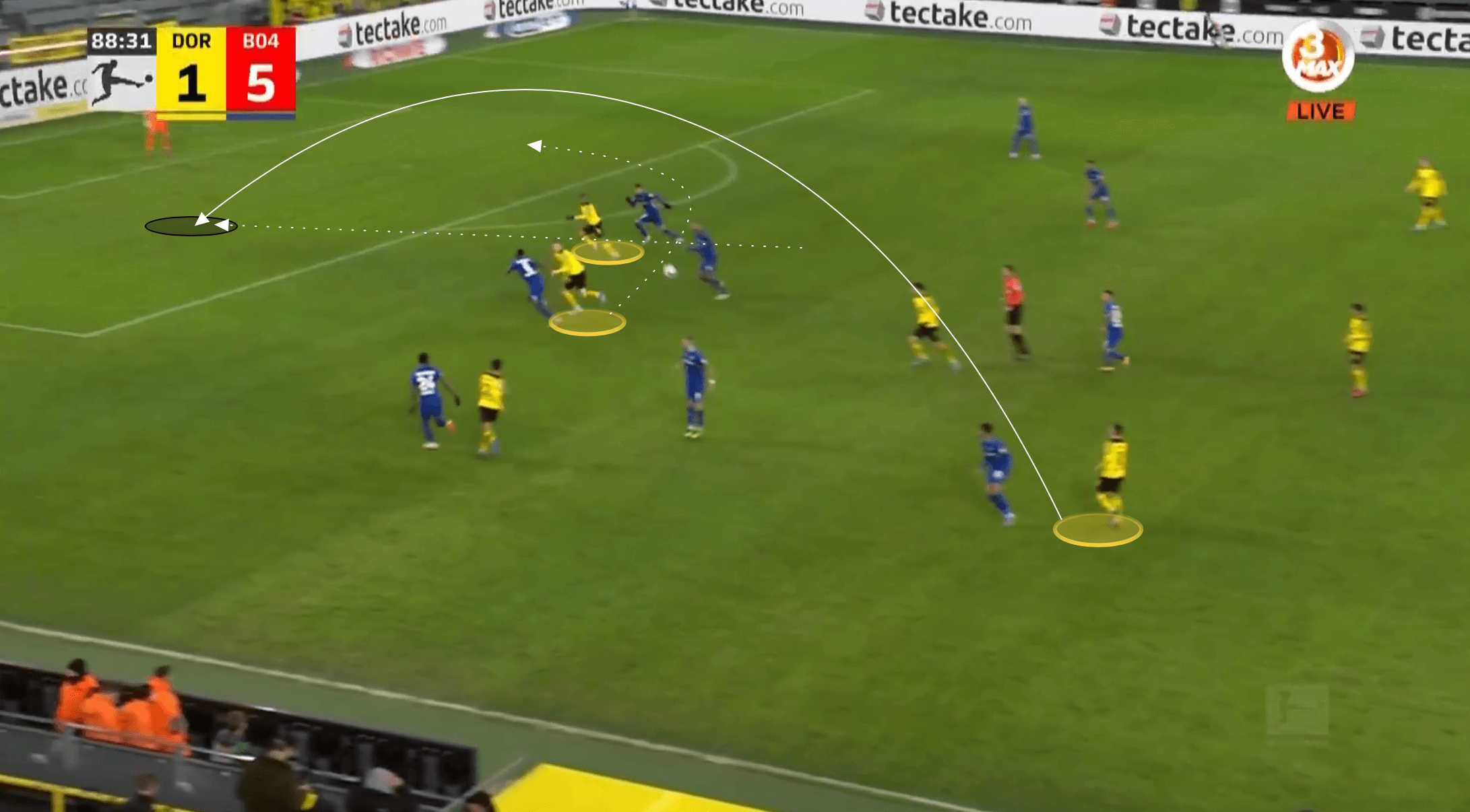 Leverkusen finishing the game on the counter

With Dortmund pushing to bring the game back to a more competitive scoreline, there were naturally even more opportunities to catch them short-staffed at the back.

Leverkusen were patient and picked their chances well and were devastating on the fast break.

They could have scored their fifth slightly earlier than they did, a ball breaking out wide for overlapping right-back Frimpong to latch onto. He could have been more aggressive than he was, choosing to delay the ball before seeking to thread it towards the back post, which he was unsuccessful with.

As we can see in the following image, there was potentially a 3v2 available in this moment had Frimpong been more aggressive and taken a touch inside as indicated by the thicker line in the image. Had he engaged the highlighted Dortmund defender it would have given enough time to exploit the 2v1 left over before the Dortmund players tracking back could arrive. 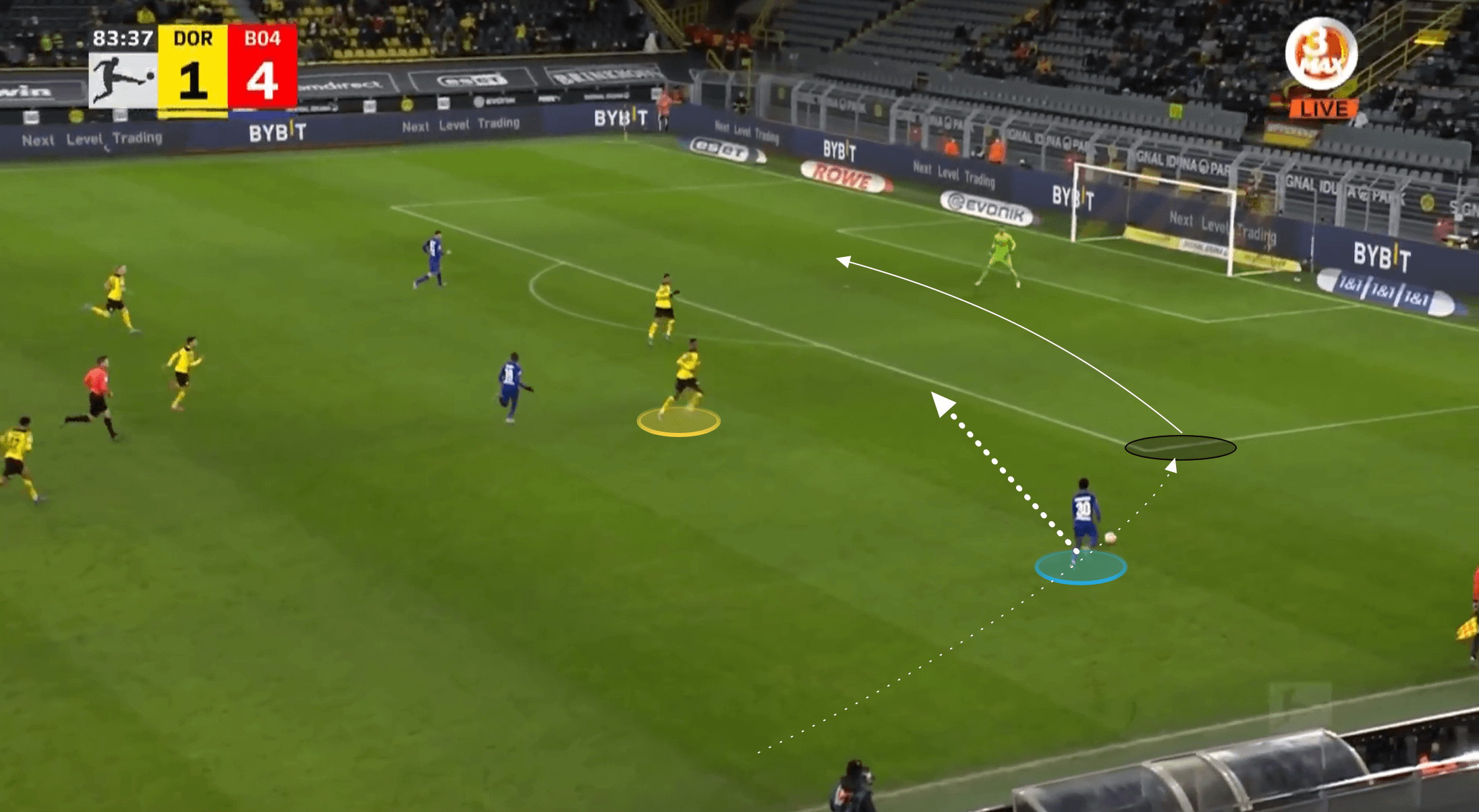 However, for the fifth goal Frimpong’s decision-making was better and he created the chance, again with a quick counter-attack emerging from inside Leverkusen’s half with the right-back overlapping once more. 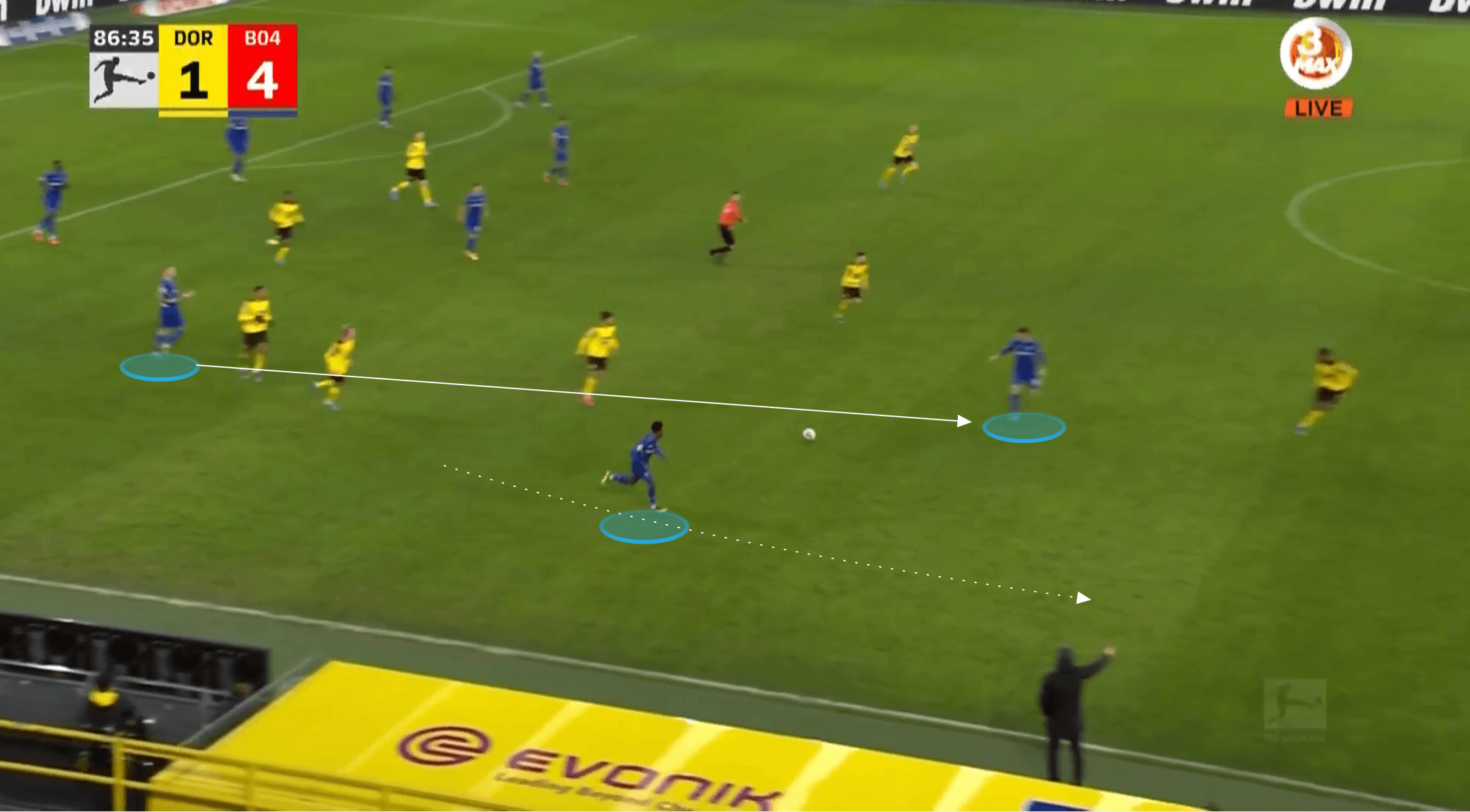 This time with no chance to cut inside and exploit an overload Frimpong struck the ball towards the far post, picking out Diaby, and rounding off their scoring for the day. 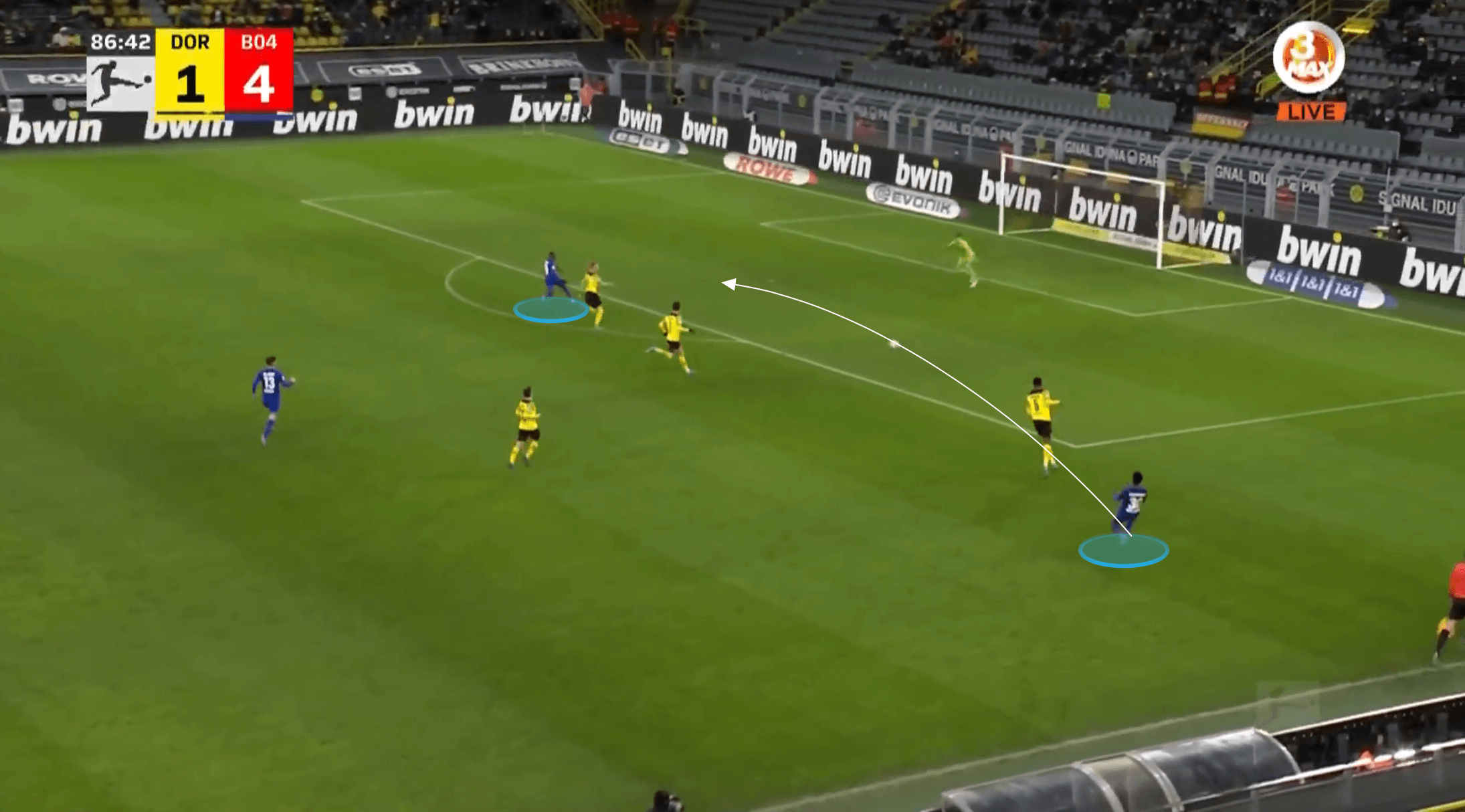 Despite missing Erling Haaland in this game, and there were some missed chances the Norwegian may have taken, but it was Dortmund’s defence that cost them this game. The overall organisation and shape of the back four cost them dearly, as did their failure to prevent Leverkusen from quickly starting attacks on transition.

It wasn’t the perfect performance by Leverkusen and they were flattered by a poor showing from the opposition, but there were nevertheless times where they looked rampant on the fast break, and they have a run of winnable games ahead before facing Bayern Munich themselves in what may well be a fascinating tie at this rate.