Freiburg and Bayer Leverkusen competed in an incredibly interesting fixture this weekend, with implications for Champions League places in the Bundesliga. The game resulted in Freiburg getting the win against the travelling Leverkusen, and in doing so leapfrogged their rivals where they now sit in third place going into the winter break, behind just Borussia Dortmund and Bayern Munich. Bayer Leverkusen now sit in fourth place, one point behind Freiburg.

It was a game where there were moments of real quality, with Leverkusen constructing dangerous quick breaks on the counter-attack, whilst Freiburg stitched together flowing attacking movements starting from Flekken and playing all the way forward. They were dangerous from out wide, and it was a cross into the area in the 84th minute that allowed them to win the game. Before this, they won a penalty due to a handball from a cross that was expertly converted by the continuously impressive Vincenzo Grifo. Leverkusen were good value for their goal even if they could have scored from easier chances, instead Charles Aranguiz reacting quickly to turn in a Jonathan Tah bicycle kick that came from a corner.

This tactical analysis provides an in-depth analysis on the tactics used by both teams in this Bundesliga fixture.

Christian Streich has chopped and changed between using a back four and a back three with Freiburg on many occasions this season, and this weekend he opted for the back four. With Mark Flekken starting in goal, Nico Schlotterbeck and Philip Lienhart sat in front of him as the centre defensive pairing. Lukas Kübler started at right-back whilst captain Christian Günter started at left-back. In midfield Nico Hofler and Janik Haberer started as a double pivot with Woo-Yeong Jeong sat in front of them in the 10 role. Vincenzo Grifo and Rolland Sallai started either side of this midfield three with Lucas Höler starting upfront.

For Bayer Leverkusen Lukas Hradecky started in goal, behind a back four of Jeremie Frimpong, Odilon Kossounou, Jonathan Tah and Daley Sinkgraven. Similar to Freiburg, Leverkusen had a double pivot with Charles Aragnuiz partnering Robert Andrich. Kerem Demirbay started in the 10 role in front of them. Patrik Schick led the line-up front flanked on either wing by the young and prodigiously talented pairing of Florian Wirtz and Amine Adli. 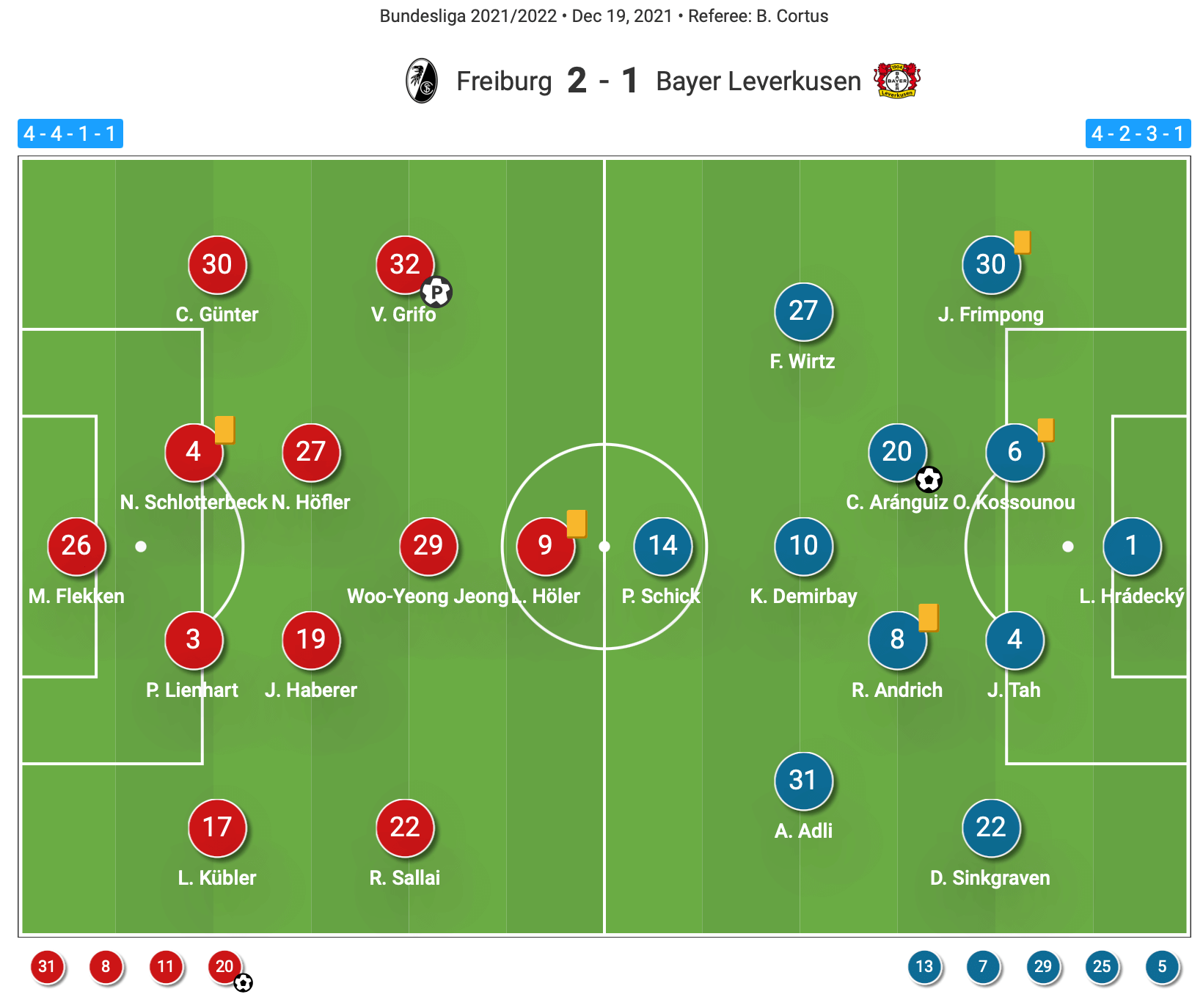 Grifo has been outstanding all season and is rightfully beginning to receive plaudits for his performances. Along with Günter he represented a consistent threat to Leverkusen’s goal.
Günter is an exceptionally hard-working full-back, and even when operating as part of a back four, he pushed forward continuously as if playing as a wing-back in part of a back five.

Günter and Grifo have developed an understanding between one another only possible from the years they have spent playing with one another. One basic but consistent feature in this relationship is that they rarely play on the same vertical line.

Only three minutes into the game Günter and Grifo combined to create one of the best opportunities of the match. Günter started the move from a narrow position, playing inside before the ball was then sent out wide to Grifo. As this pass was made Günter continued his run, under-lapping Grifo and breaking through the space between Leverkusen’s Frimpong and Kossounou. We can see this pattern occurring in the image below. 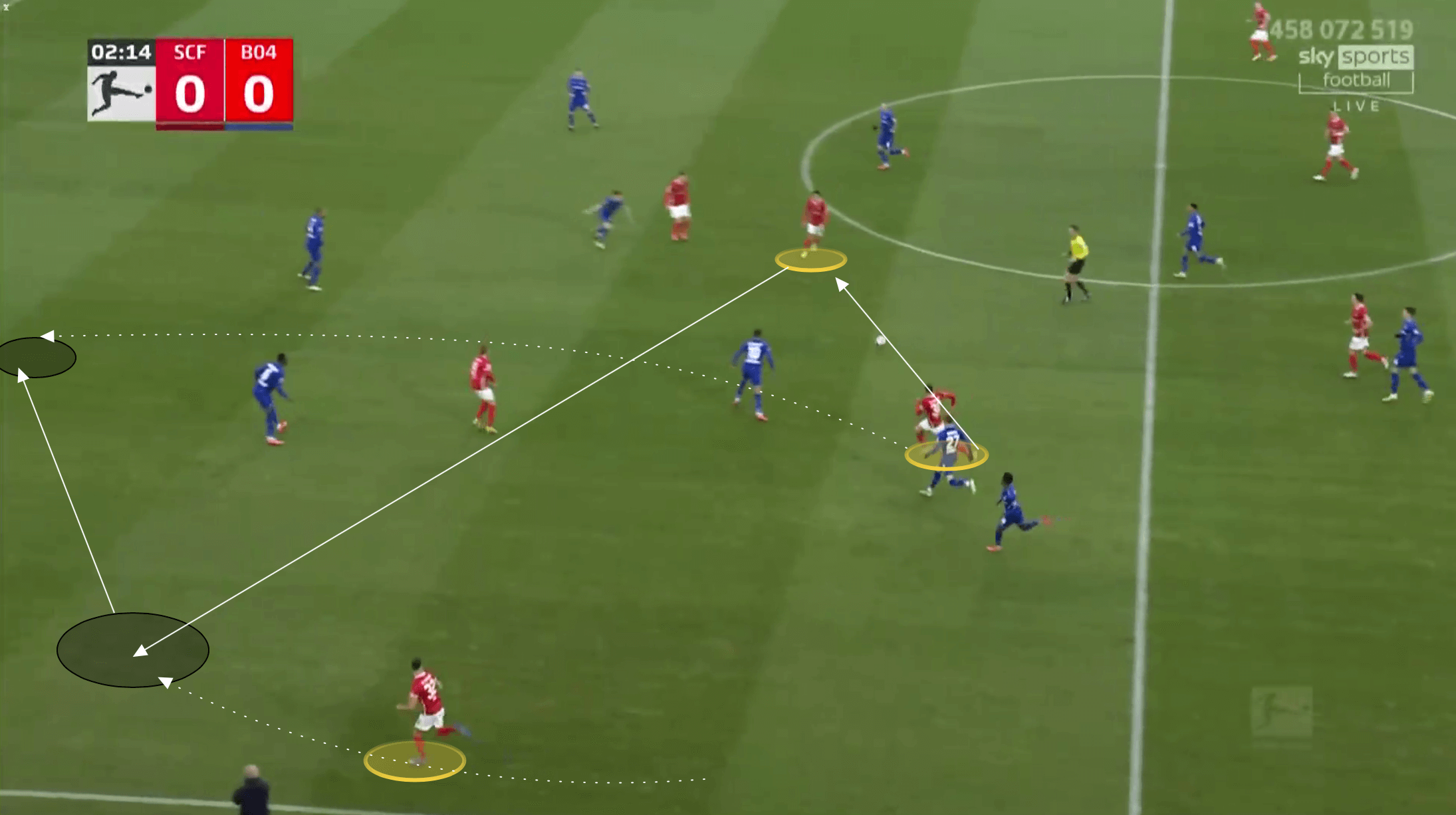 Günter was then found by a through pass in behind from Grifo. The left-back controlled the ball before pulling the ball back for the arriving Höler, who couldn’t finish from close range. However, this move was a prime example of the relationship between Günter and Grifo, and the pair would continue to cause problems for Leverkusen’s defence over the course of the game. 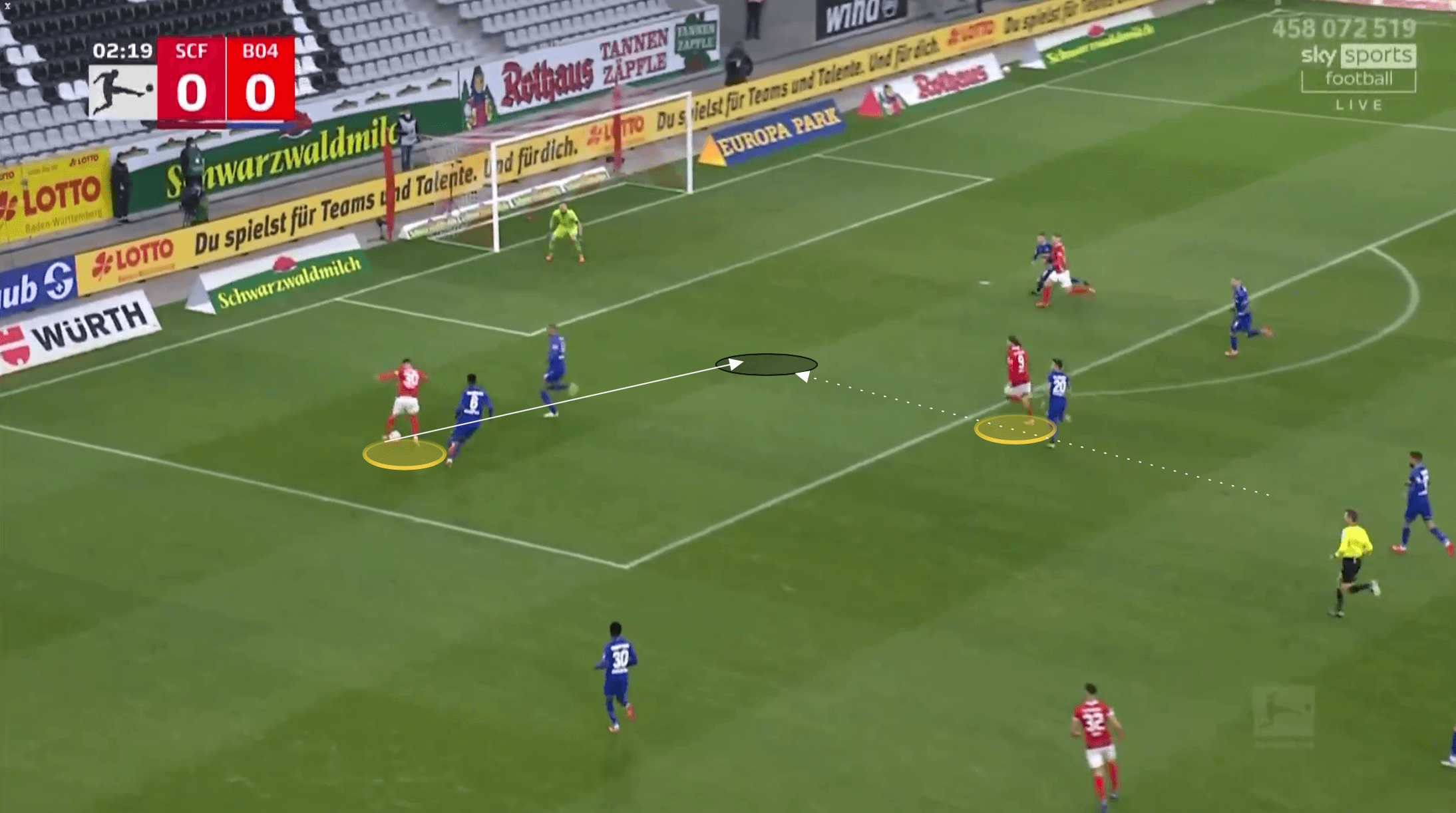 Gunter’s energy allows Grifo to often drift inside and explore central spaces. This can allow the winger to pick up possession in between the lines and causes problems for an opposition defence unless they can keep little-to-no space between their midfield and defensive lines.

We can see Leverkusen’s back four occupied by Freiburg’s front three of Sallai, Jeong, and Höler. Gunter is golding the height and width on the left flank, and in turn, Grifo is able to drop into the 10 space. 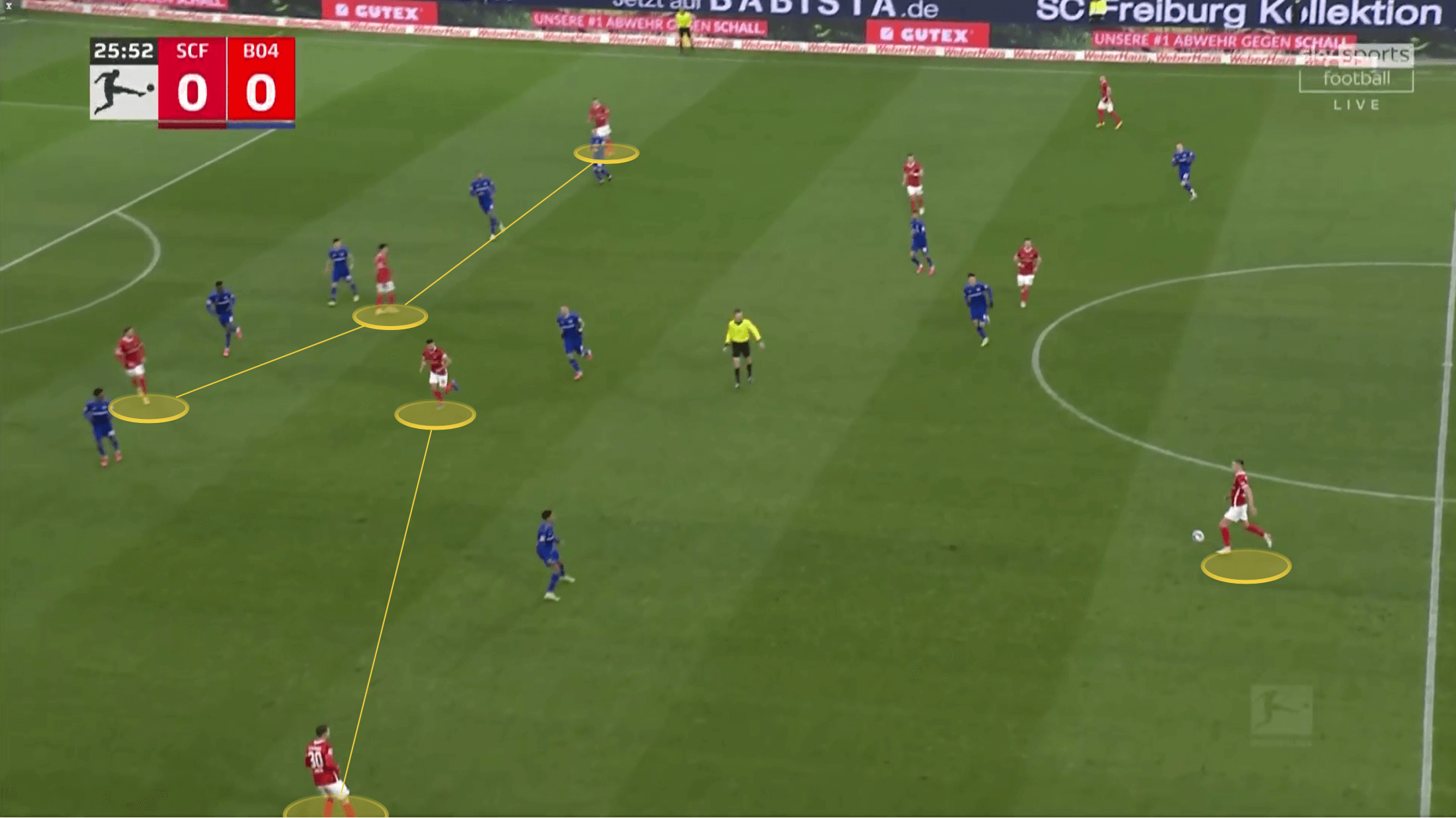 In this example Grifo doesn’t receive, however, should a team look to prevent him from receiving, by sitting compactly, as Leverkusen did here, it just provides space for Günter.  The left-back didn’t have his best crossing performance but nevertheless forged another good opportunity in the 26th minute with a cross emanating from this passage of play. His delivery can be seen in the next image, whipping the ball entirely across goal towards the back post, where Sallai made a late movement inside Sinkgraven to latch onto the cross, albeit he couldn’t capitalise on this opportunity. 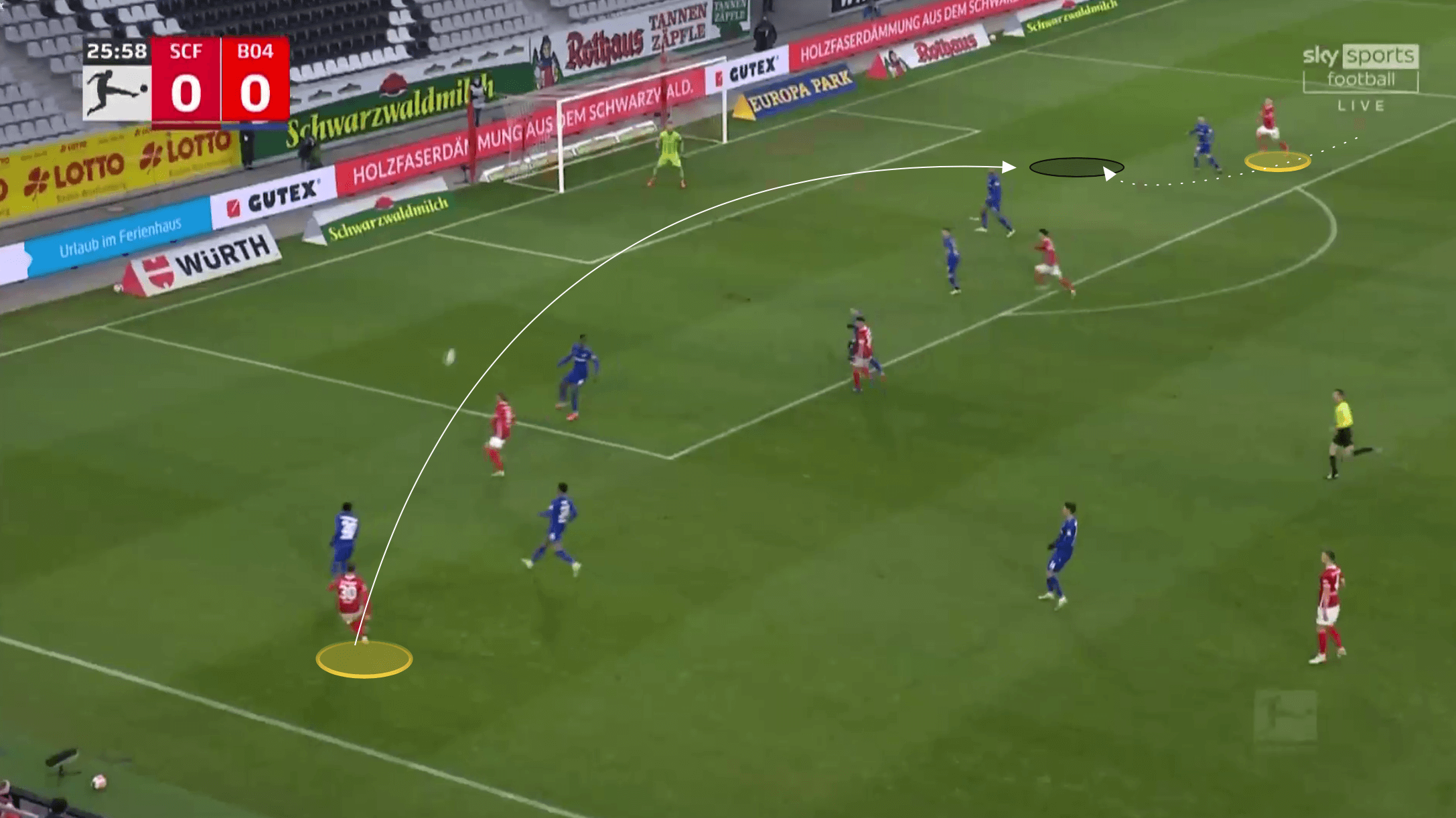 Whilst Freiburg statistically registered more counter-attacks than the counterparts on the day, it was Leverkusen who constructed the more dangerous counters. The likes of Wirtz, Adli, and second-half substitute Paulinho used their fast-paced ball-carrying, smart off-ball movement, and ability to play off of limited touches to great effect, whilst Schick stretched the pitch, occupying the Freiburg centre-backs.

We can see such an example of this early on as Adli dispossessed Jeong close to the Leverkusen area. Wirtz instinctively moved in behind and whilst Adli was careful to first engage the highlighted Freiburg defender before releasing the ball, Wirtz was able to drive forward. 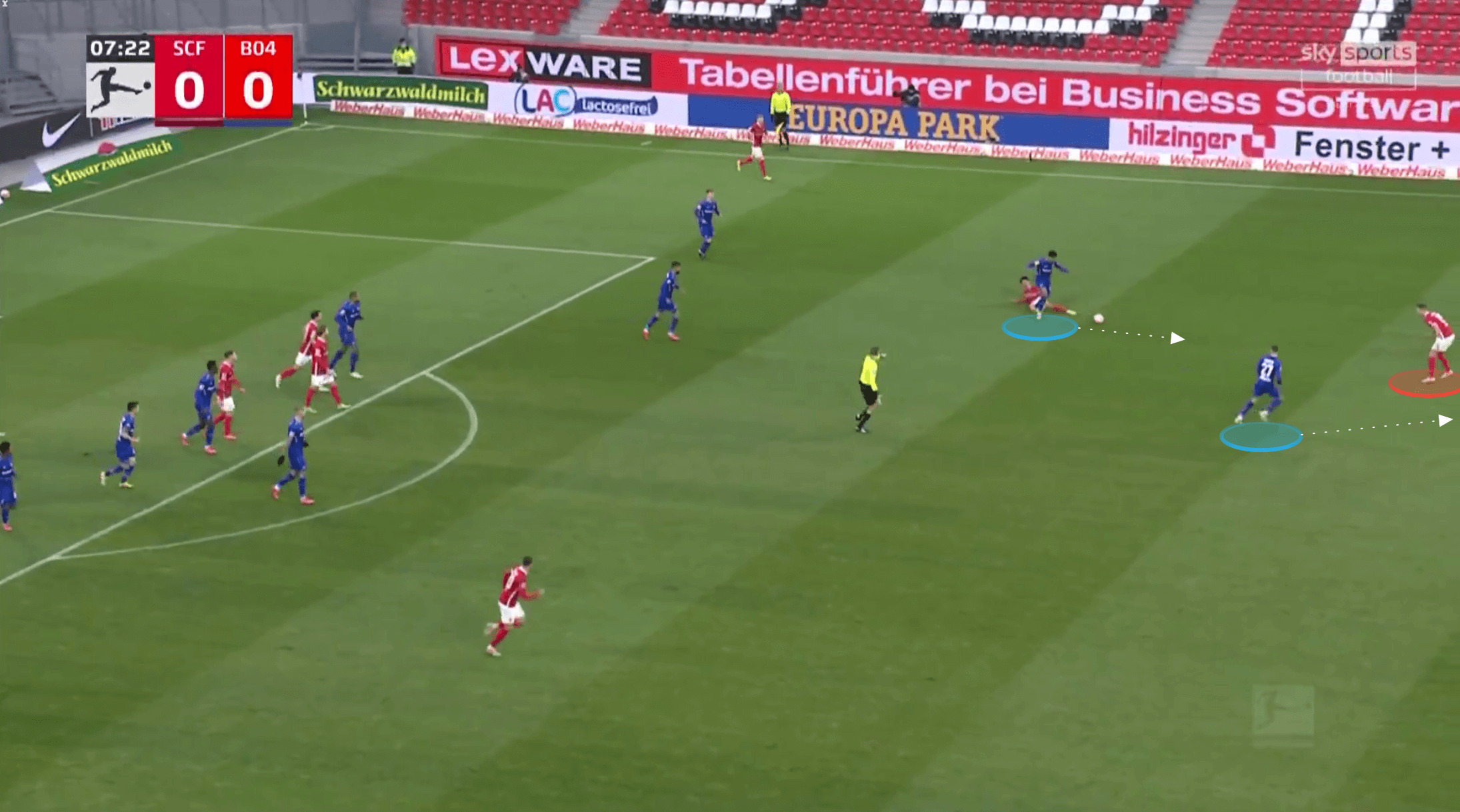 We can see how quickly Leverkusen turned this into a dangerous situation, with a 3v3 as Adli strived to catch up with Wirtz and Schick. 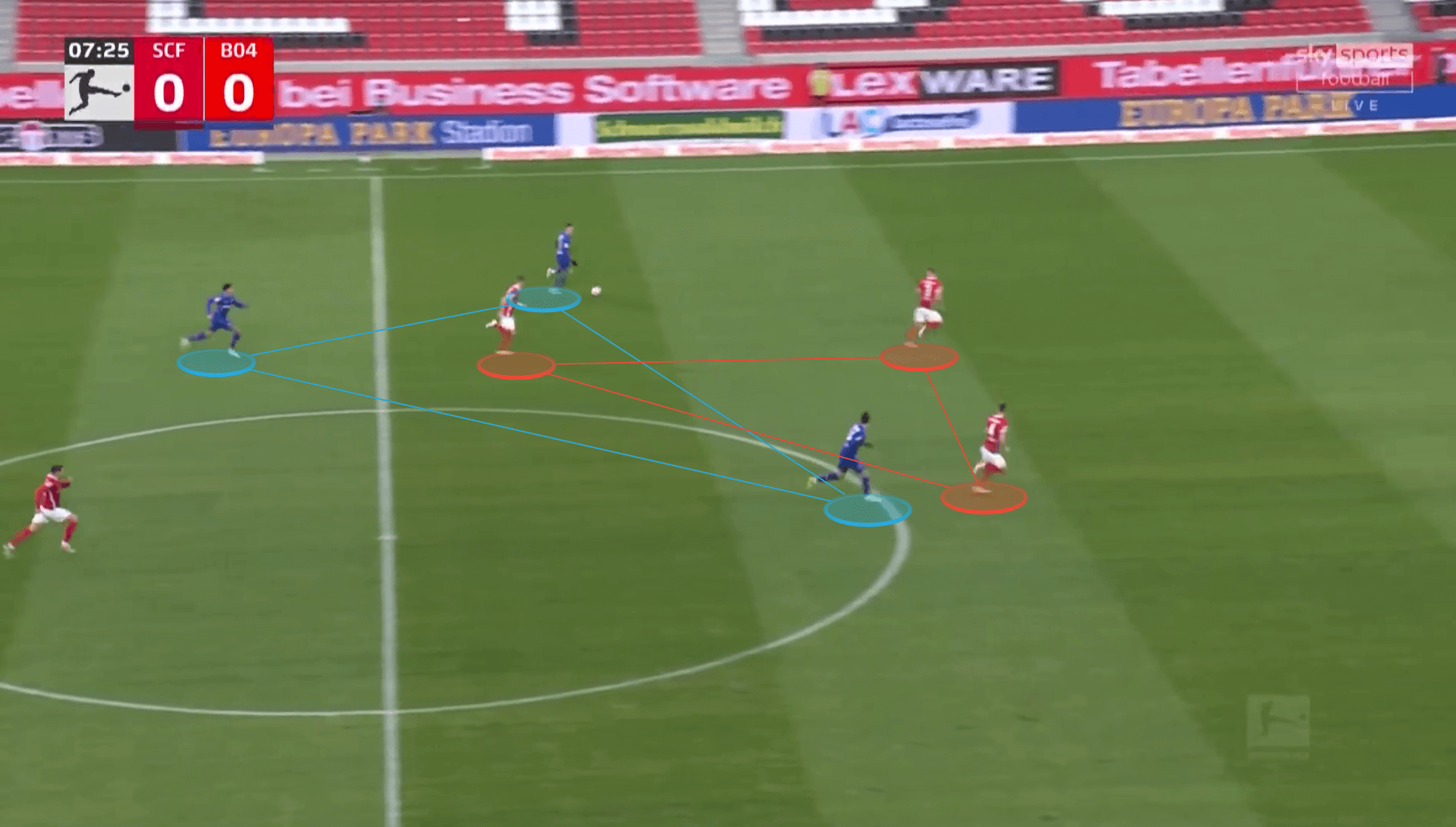 Gerardo Seoane’s side are so well-drilled on patterns of play to use upon a turnover of possession, and whilst they looked to play forward as soon as possible, they would also move the ball on laterally initially if it opened up other pass opportunities. We can see a quality pattern of play here as Andrich offloaded possession to Tah who in turn immediately broke the line with a forward pass. Wirtz reacted to this pass by shifting inside and sensing the pressure from a Freiburg defender played inside immediately to Andrich who had continued his run. 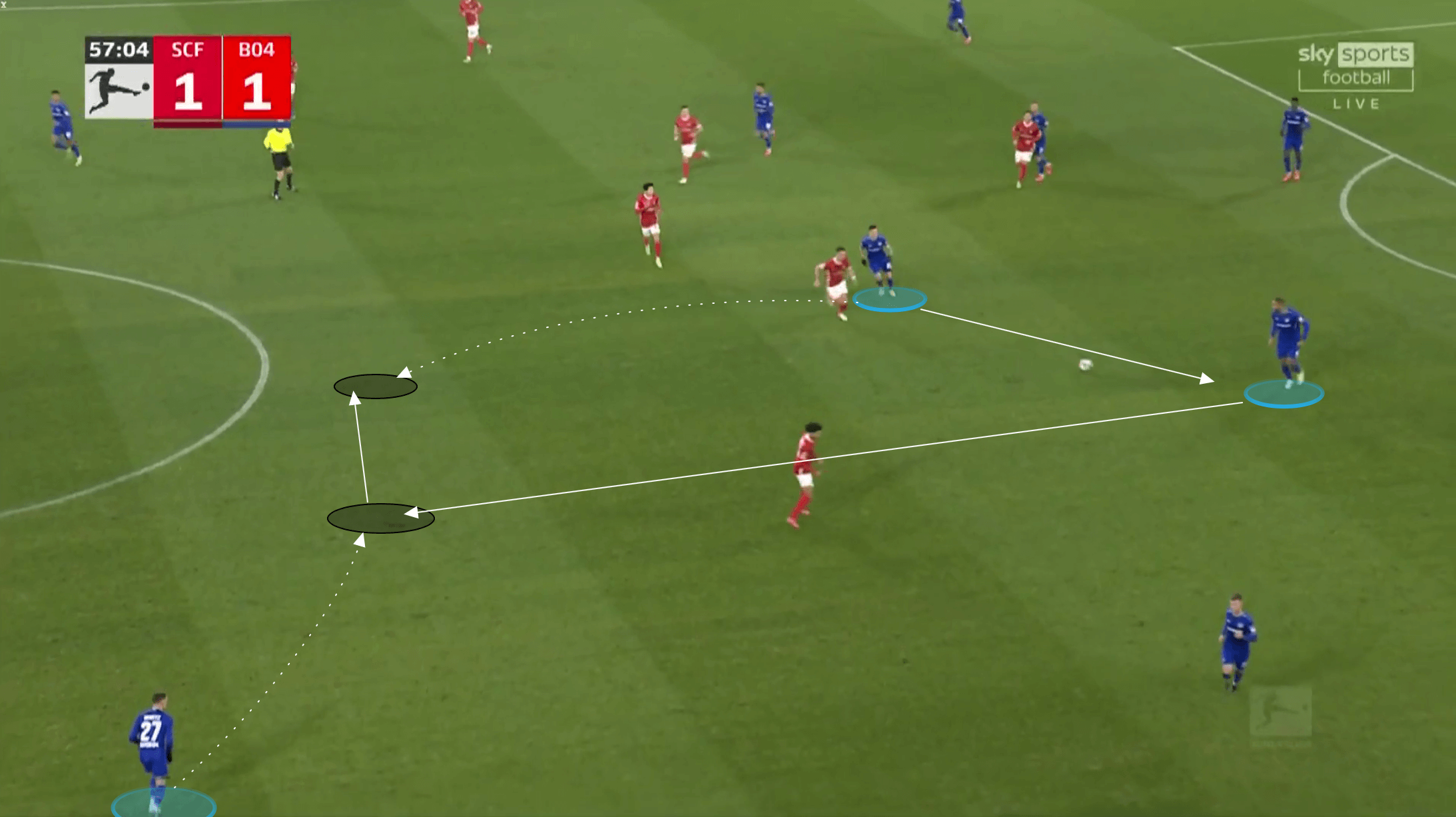 This combination used minimal passes and minimal touches and immediately created a favourable counter-attacking situation for Leverkusen, who had a 3v2 against Feieburg’s lone two defenders left back in this scenario. And yet they couldn’t capitalise. 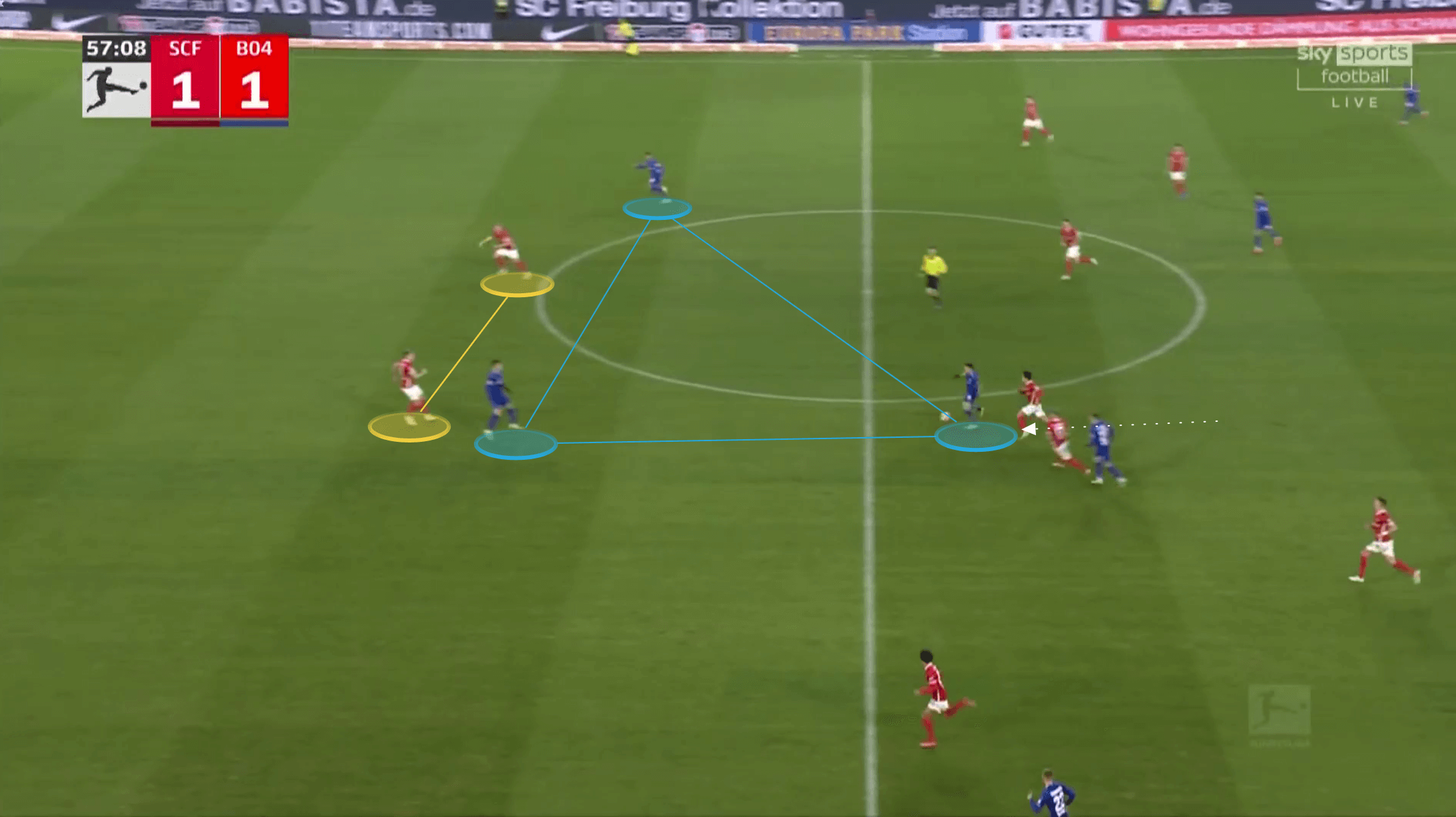 One of their best chances of the game, and one that could have got them the three points on the road came merely minutes before Freiburg’s winner. Paulinho used his outstanding dribbling ability to quickly carry the ball forward and breakthrough Freiburg’s midfield. 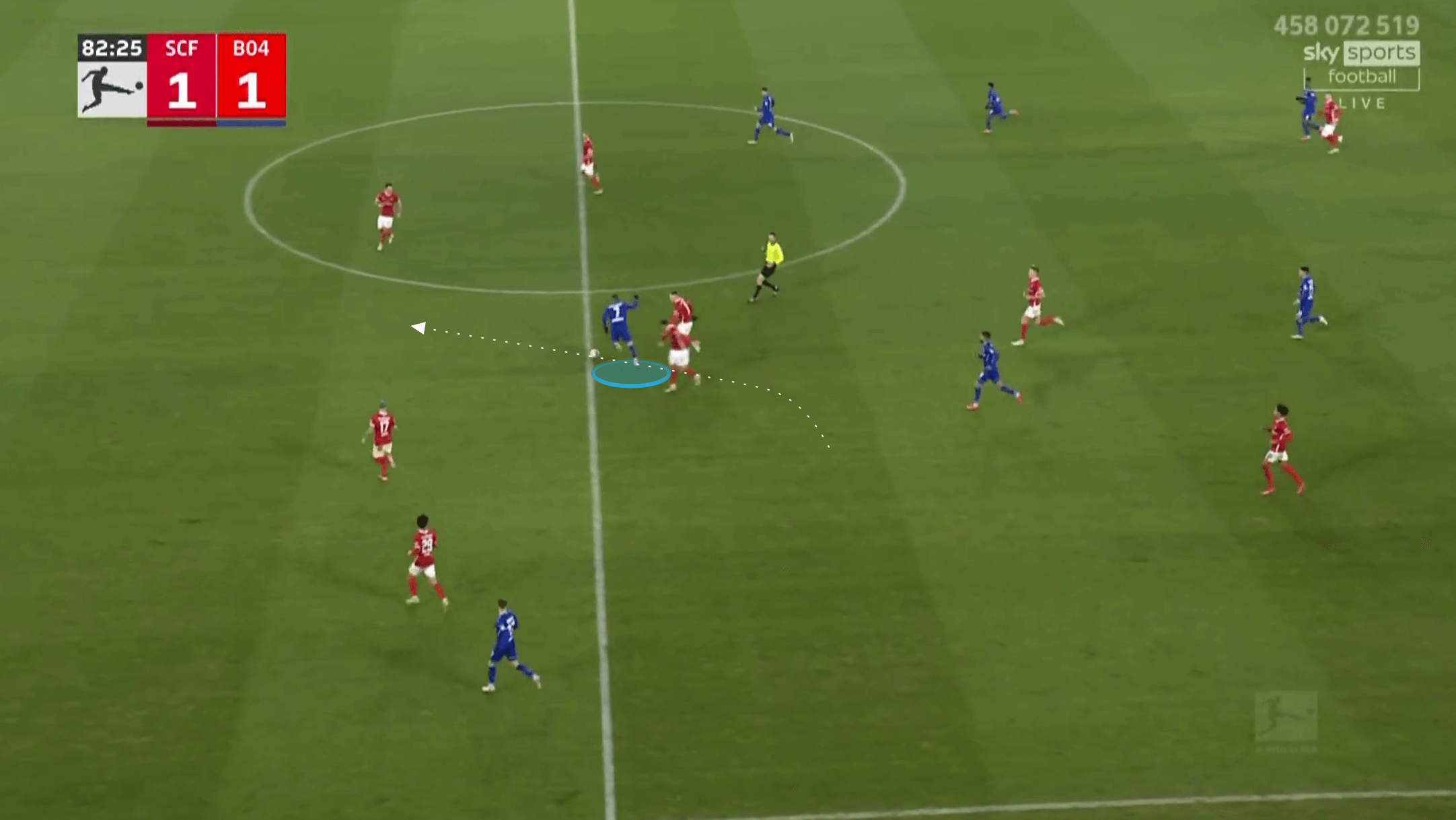 However, on this occasion, Freiburg were well protected centrally against the counter. As a result, Paulinho offloaded the ball out wide to the overlapping Frimpong. Both Schick and Wirtz attacked the back post and the right-back swung in an excellent cross into the vacant area behind Freiburg’s defence, with both attackers unable to get to the flight of the ball and missing the cross by the smallest of distances. 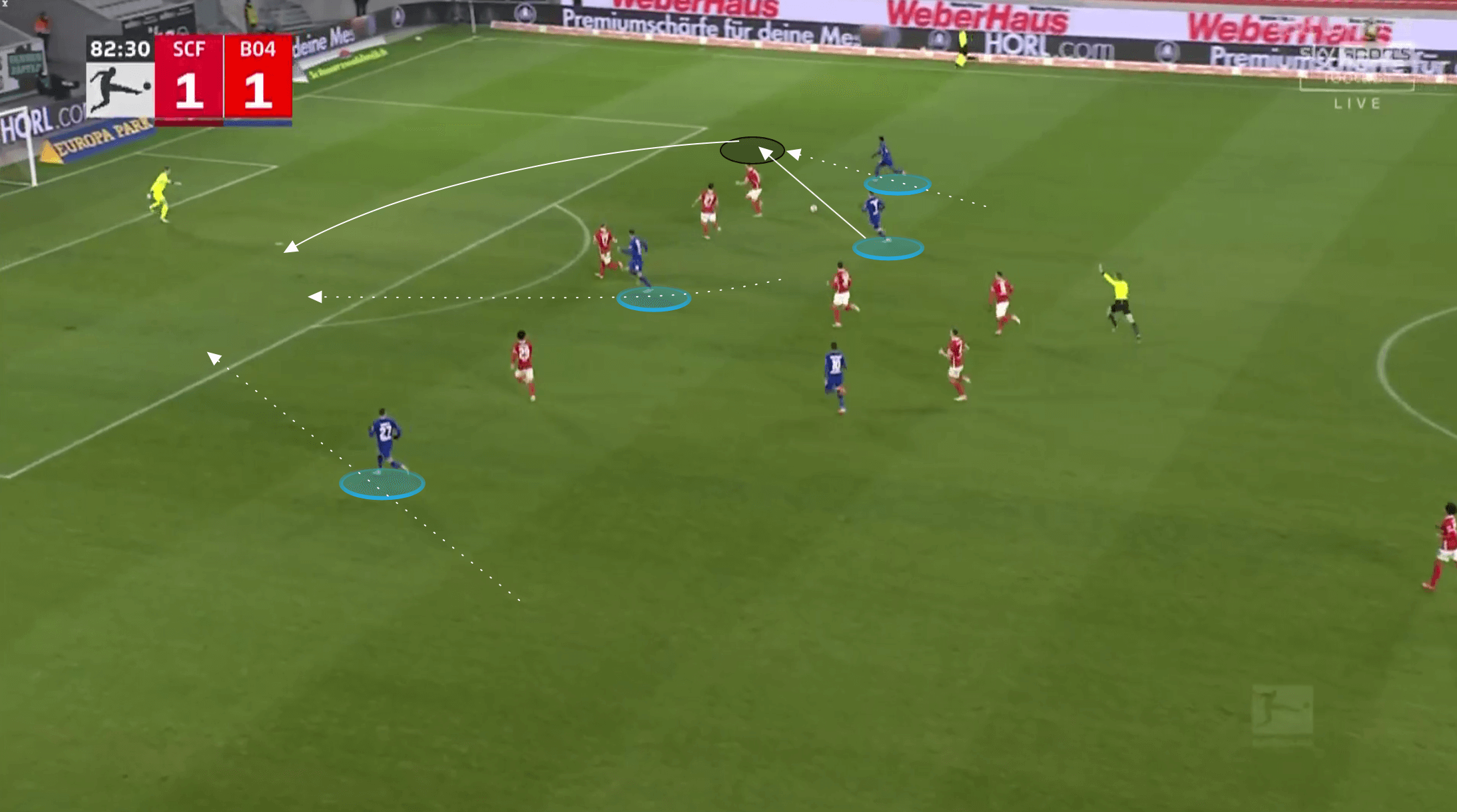 Freiburg were highly positive in possession and pushed up both full-backs with some regularity into the opposition half, relying on their centre-backs to frequently carry the ball forward, whilst Hofler sat slightly deeper, giving the two centre-backs some protection against any counter-attacks. We can see this in the image below, showing their average positions. 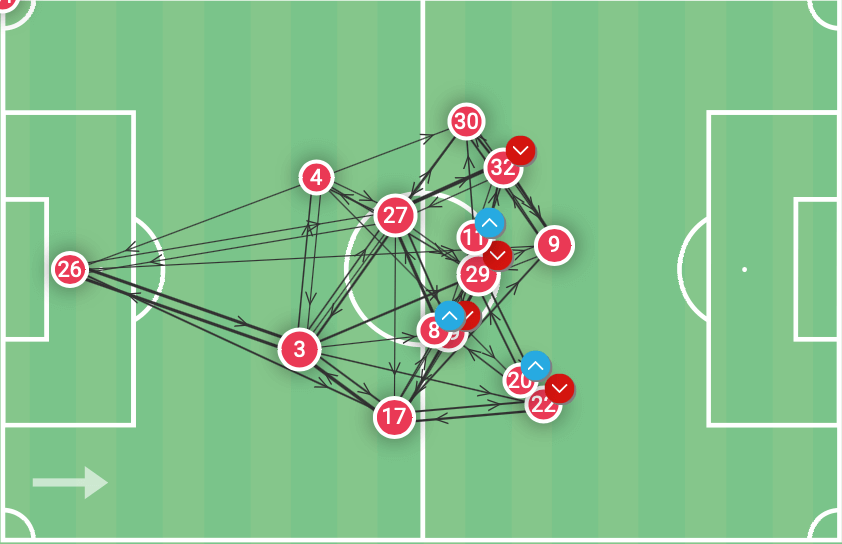 They were compact in possession, again which we can see in the previous image.

An example of this is shown in the following image as the ball is played out wide to right-back Kübler. We can see Günter well inside the Leverkusen half, ready to push high and wide if the ball is circled, but compact enough to protect his team against the loss of possession. Hofler can be seen just in front of the two centre-backs. Upfront Höler shifts across the pitch, dragging Kossounou with him, whilst Grifo looks to hit the space vacated by the pair. Freiburg consistently built up with a triangle out wide, with the closest central-midfielder on that side shifting towards the ball. This gave them that security around the ball and would provide a 3v2, allowing Freiburg to work the ball down the wing. 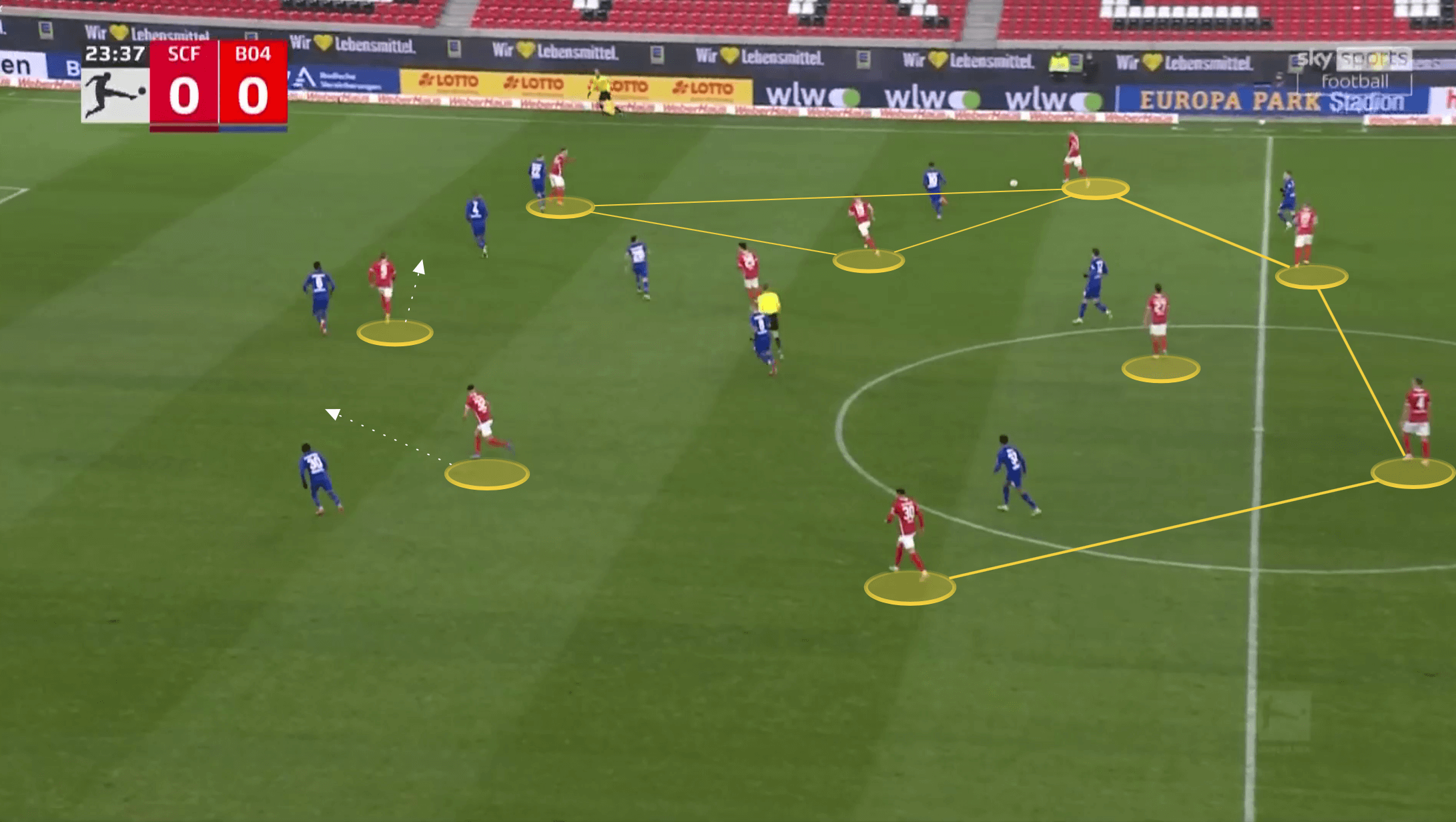 Freiburg were dangerous from wide areas throughout the game, and even in the event where the cross didn’t meet a Freiburg player, the ball was continuously put into dangerous, goalscoring positions.

We can see that they gained far more success from crossing from deeper areas of the pitch rather than with any kind of pull-back crosses. 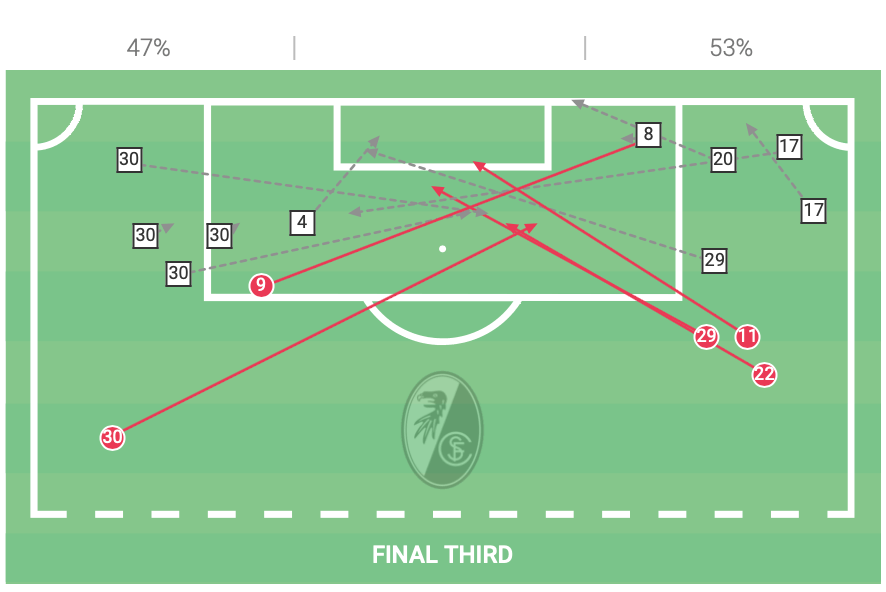 Freiburg were able to work the ball through Leverkusen’s midfield easily enough through simple interchanges between the midfield before quickly working the ball out wide. After the ball was played out wide, by Eggestein in this case, the central-midfielder would continue his run to create the aforementioned triangle. 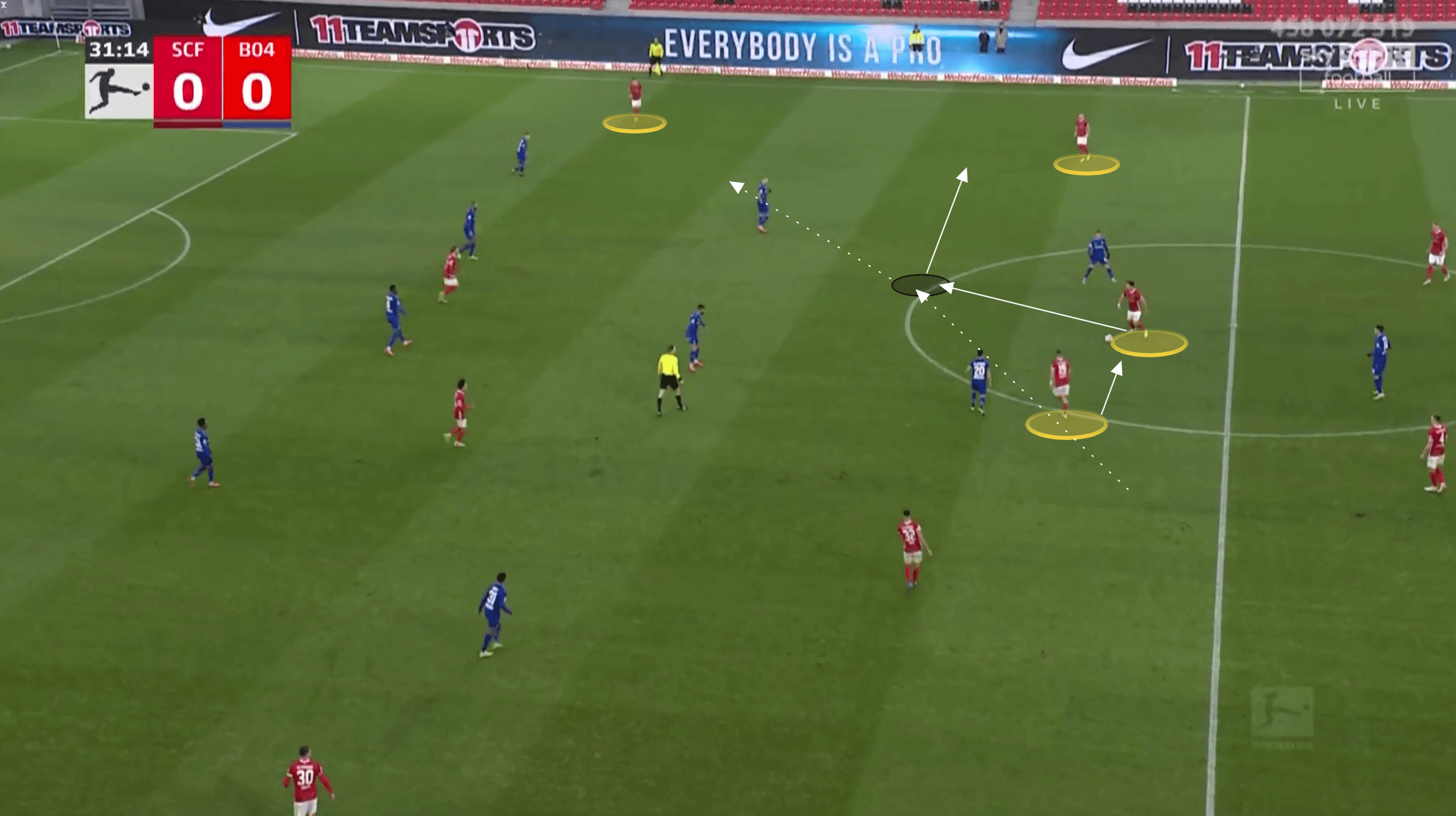 Whilst the central-midfielder was an option inside, a ball down the line to the winger would often be an easy option given Leverkusen’s compactness as a unit. We can see this in the following image. The key to creating the opportunity for Sallai to cross here and prevent Sinkgraven from stepping forward to press him and take away the space is the movement of Kübler. Kübler overlaps, and as a result, Sinkgraven can’t step to Sallai, having to mark the space and step off in case Sallai were to play the ball back down the line for Kübler. 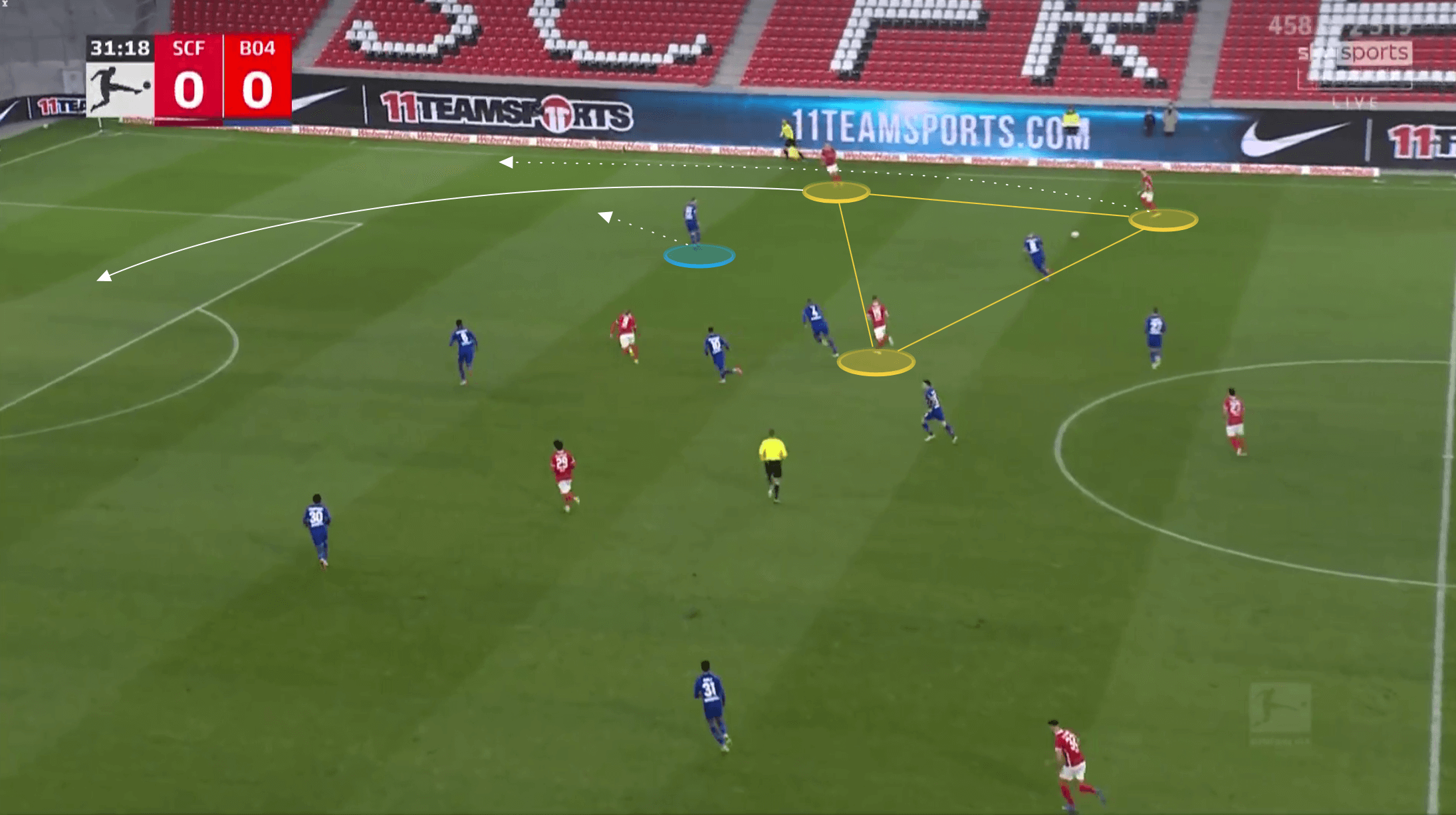 It was inevitably a goal from a similar area to the ones we have seen previously that Freiburg prospered from. With the ball played out wide to second-half substitute Ermedin Demirovic, the Bosnia and Herzegovina international then whipped the ball in early behind Leverkusen’s defence. The youngster, signed from Energie Cottbus back in 2018, was able to latch onto the cross and score his second league goal for the club to claim all three points. 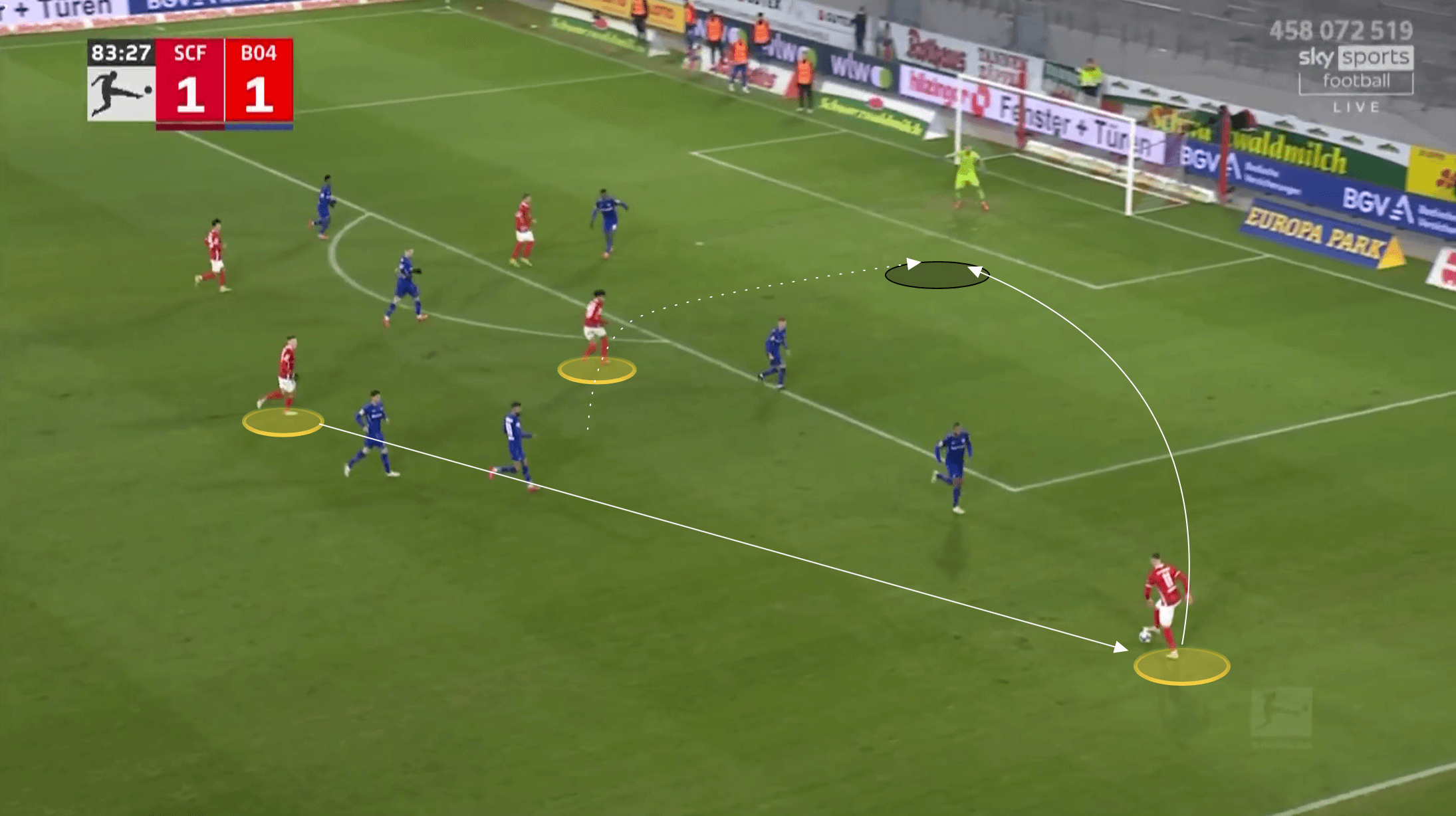 Frankly, it will take a lot for Bayern Munich to not win the league as they go into the winter break with a nine-point lead, and whilst Dortmund’s five-point gap themselves over third-place Freiburg isn’t insurmountable, it would make sense to assume this will be our top two come the end of the season. Meanwhile, it is a far more congested battle for third and fourth-spot and Freiburg have undoubtedly been the surprise package of the season, playing a truly terrific brand of football. After a recent wobble, this victory felt deserved for Freiburg not only as an individual win but allowing them to sit in third spot going into the winter break. Incredibly there are only two points between third and seventh though and this battle for the final two Champions League spots will be one to watch over the second half of the season as both Freiburg and Bayer Leverkusen will have to fight it out with Hoffenheim, Eintracht Frankfurt, and Union Berlin. Further back, Koln, Mainz, and Leipzig will also fancy their chances of getting involved in this race for European football.