Tunisia reached the final of the FIFA Arab Cup 2021 alongside Algeria after both teams were able to beat all the other Arab national teams participating in the competition. Tunisia won against Mauritania with a 5-1 result before losing in an expected way when facing Syria. That loss was like an awakening for the Carthaginians who realised that their level should be improved in the upcoming games if they’d like to reach an advanced stage in the competition. That’s exactly what happened when they met the United Arab Emirates and won 1-0 thanks to Seifeddine Jaziri’s goal. It was a win that secured Tunisia’s qualification to the Quarter-finals at the top of Group B, meeting Oman and then Egypt in the Semi-finals while beating both teams.

For Algeria, the adventure started with a 4-0 win against Sudan, a 0-2 win against Lebanon before drawing 1-1 with Egypt and qualifying to the Quarter-finals where they met a tough Moroccan side. It was a match that ended 2-2 and the result was decided by penalties for Algeria who met the hosts, Qatar, in the Semi-finals. Algerians had enough confidence and abilities to beat Qatar at their stadium to finally reach the final of the competition, meeting one of their biggest rivals if not their biggest Arab rival.

It is true that this competition has a friendly flavour and is organised as a preparatory tournament for the upcoming 2022’s FIFA World Cup, yet, the final, as well as the preceding matches, were played with a lot of motivation from everyone as they were playing an Africa Cup of Nations or an Asian Cup.

The final ended with a 0-2 win for Algeria who proved once again that they are one of the best Arab teams if not the best at the moment after winning the 2019’s Africa Cup of Nations and proving their worth alongside the big African national teams as well.

On the other side, Tunisia will look at their participation with proud eyes since the achieved result was a little bit higher than the expectations even though the team could have done more in the final to win the trophy. Nevertheless, the efforts of the players deserve some praise especially when knowing that this team faced numerous issues including last-minute injuries and Covid cases that prevented the coaching staff and especially the head coach, Mondher Kebaier, from exploiting all his weapons and applying his ideas in the desired way.

The inclusion of new players was also a very beneficial achievement for the team since the coaching staff won some reliable players who shined during this tournament and proved their worth such as Mohamed Amine Ben Hamida, Bilel Ifa, Mohamed Dräger, Ghailene Chaalali, Firas Ben Larbi, Hannibal Mejbri, Mohamed Ali Ben Romdhane and Seifeddine Jaziri, ahead of the 2021’s Africa Cup of Nations.

In this tactical analysis article, the focus will be mainly on Tunisia’s performance, their defensive tactical mistakes and the reasons why they were not able to equalise. This will of course be accompanied by an analysis of Algeria’s attacking strengths.

During this competition, Mondher Kebaier tried to alternate between the 3-4-3 formation and the 4-3-3 but the injuries of Hamza Mathlouthi and Yassine Meriah obliged him to use the 4-3-3 formation in the final using Mouez Hassen as a goalkeeper, Mohamed Dräger as a right-back, Montassar Talbi and Bilel Ifa as centre-backs, and Mohamed Ali Ben Romdhane as a left-back. The midfield was composed of three central midfielders, Ghailene Chaalali, Manchester United’s Hannibal Mejbri and Ferjani Sassi. In attack, Seifeddine Jaziri was the team’s striker while Youssef Msakni and Naïm Sliti played on the wings and often cut inside to be more dangerous and exchange passes with Jaziri.

For Algeria, head coach Madjid Bougherra, who replaced the official Algerian national team head coach Djamel Belmadi during this competition, opted for the 4-2-3-1 formation during this match with Raïs M’Bolhi as a goalkeeper, Houcine Benayada on the right flank, Abdelkader Bedrane and Djamel Benlamri as centre-backs and Ilyes Chetti as a left-back.

In the absence of Milan’s Ismaël Bennacer and Galatasaray’s Sofiane Feghouli, Bougherra used Houssem Eddine Mrezigue and Sofiane Bendebka as a midfield duo, with Yacine Brahimi playing an advanced playmaker, Youcef Belaïli and Tayeb Meziani on the wings and Baghdad Bounedjah as a striker.

It should be said however that Algeria were deprived of some other big names like Manchester City’s Riyad Mahrez, Lyon’s Islam Slimani and one of Serie A’s rising talents, Adam Ounas, who plays at Napoli. The same applies for Tunisia who weren’t able to benefit from the services of Ligue 1 and Saint-Étienne’s Wahbi Khazri, Köln’s Ellyes Skhiri, Metz’s Dylan Bronn, Ferencváros’s Aïssa Laïdouni and many other players. 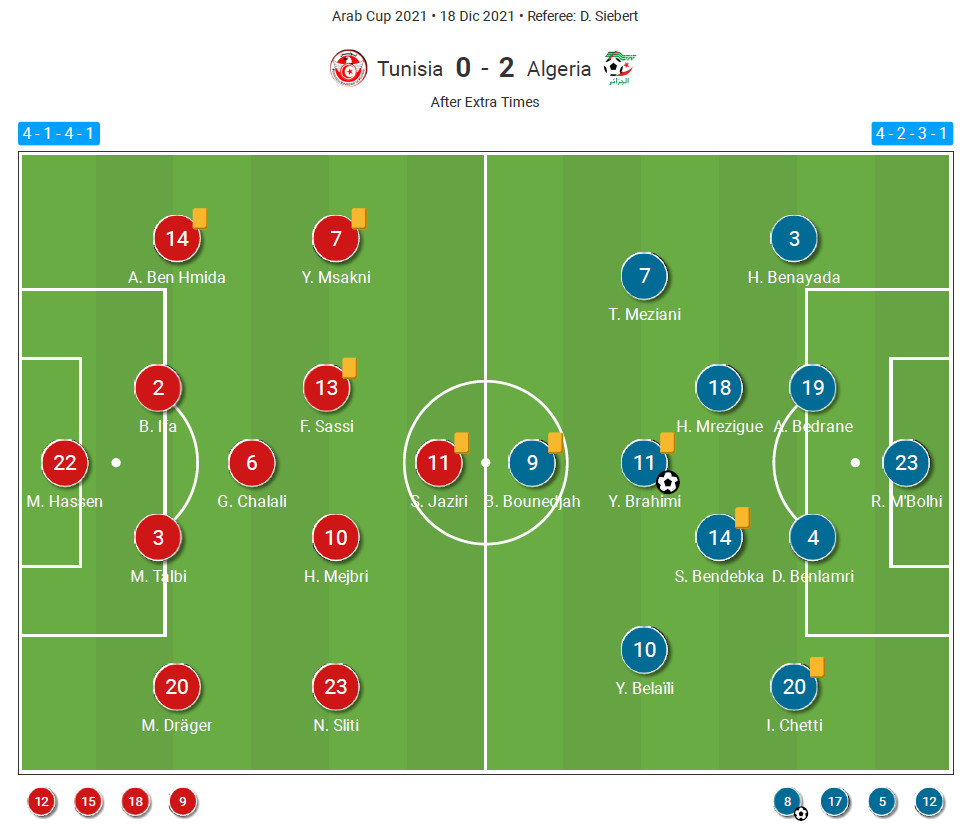 Tunisia had an average of 54.88% in terms of possession, won 48.75% of the total duels while winning 43.2% in offensive duels. However, they shot 16 times on target with only two shots being on target, equalling an average of 12.5% against 26.32% for Algeria. It is true that both averages are low when it comes to shots on target, but having only two shots on target in a final means that the team has a problem in finishing. The issue doesn’t really concern chance creation since Tunisia reached M’Bolhi’s goal 16 times in this match.

To put things into their context, the first shot that was on target occurred during a well-executed set-piece from Sliti towards the far post where Ifa was unmarked and exploited the occasion with a powerful head that hit the crossbar and went out. It was a well-played action from the Tunisians who weren’t lucky enough since the ball could have hit the crossbar and went in given that the ball surpassed M’Bolhi who mistimed his saving attempt. 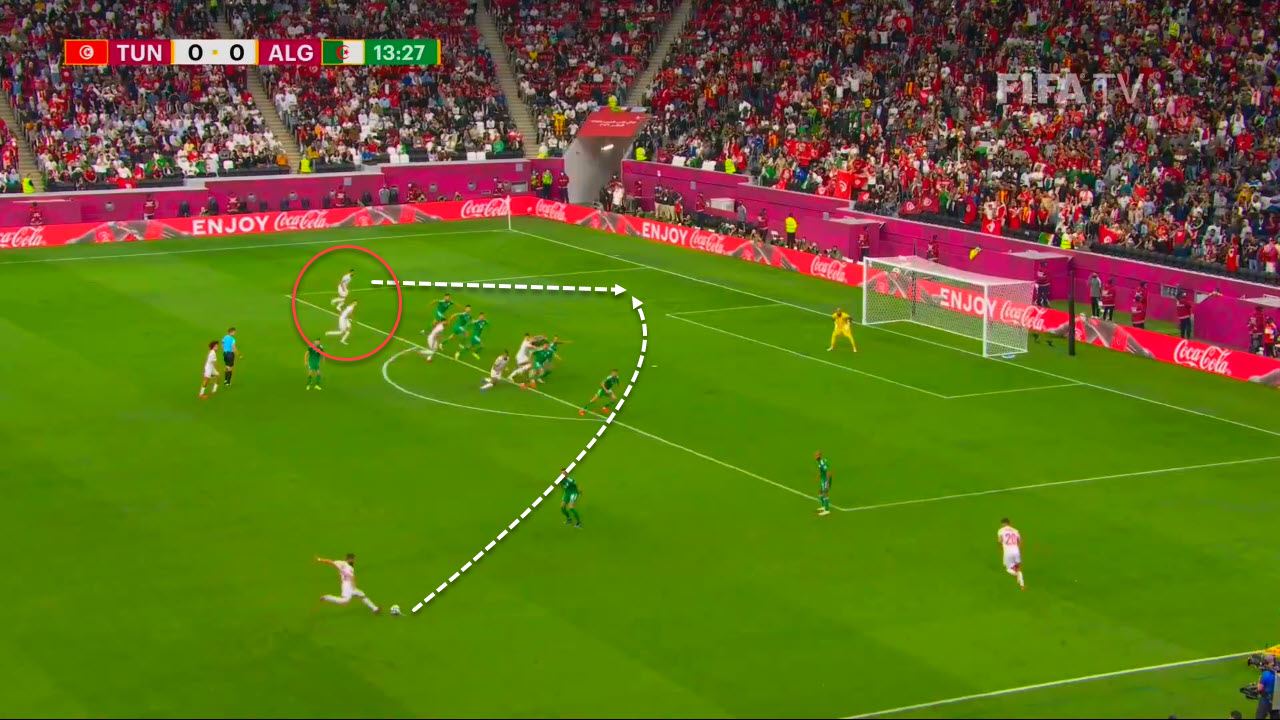 What was surprising during this free-kick is that both centre-backs Ifa and Talbi were not marked at all at the start of the action and were given much space for coordination and movement. Tunisia could have exploited this defensive Algerian weakness by exploiting free-kicks and corners better and relying on Tunisian superiority in aerial duels.

Following this big occasion, Tunisia had another great opportunity that was saved miraculously by M’Bolhi after Sliti’s individual effort. The latter exploited his excellent one vs one dribbling skills to surpass his direct opponent and shoot with great power with his weaker foot to surprise M’Bolhi. Yet, the result was not as Sliti expected given the excellent goalkeeping skills of Algeria’s goalkeeper. 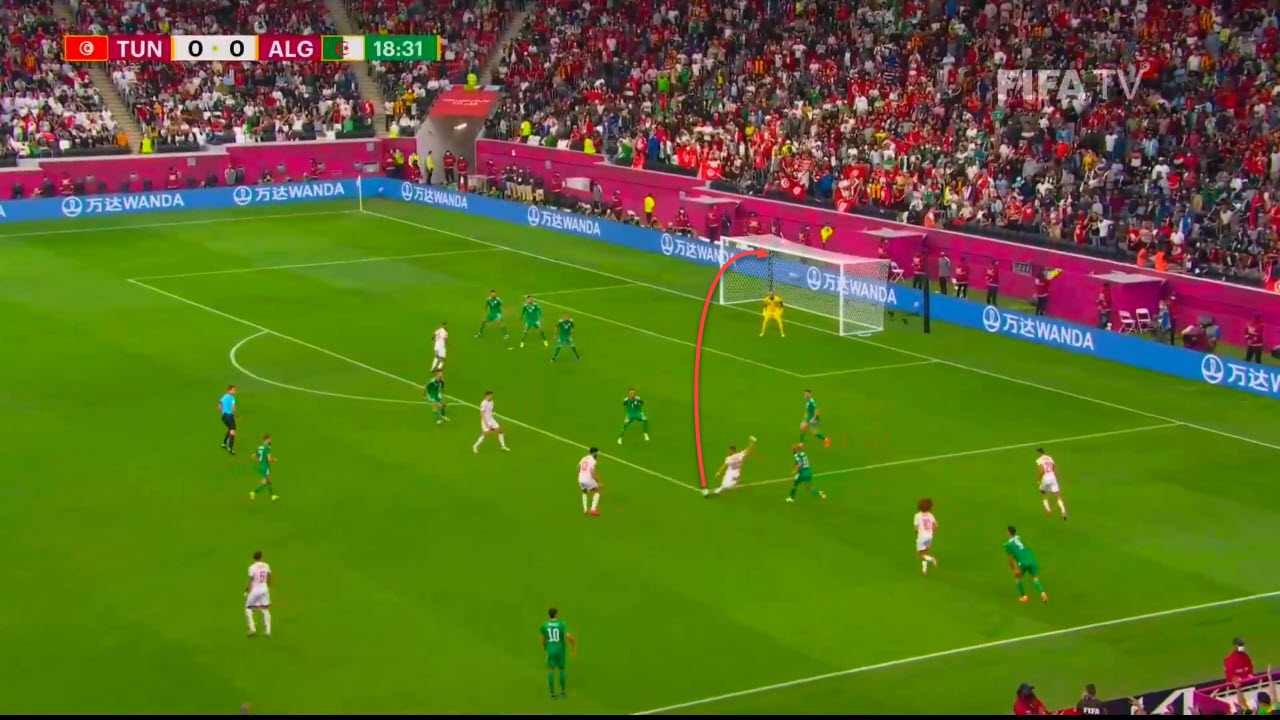 In addition, the source of this action was a single Tunisian player’s pressing effort. Mejbri’s efforts without the ball were outstanding during this match and throughout the tournament since Manchester United’s wonderkid has been so valuable in the phase of non-possession for his team. His attempts to disturb the opponents in defence, midfield and even in the final third like in this example, were continuous and caused many problems to Tunisia’s opponents. 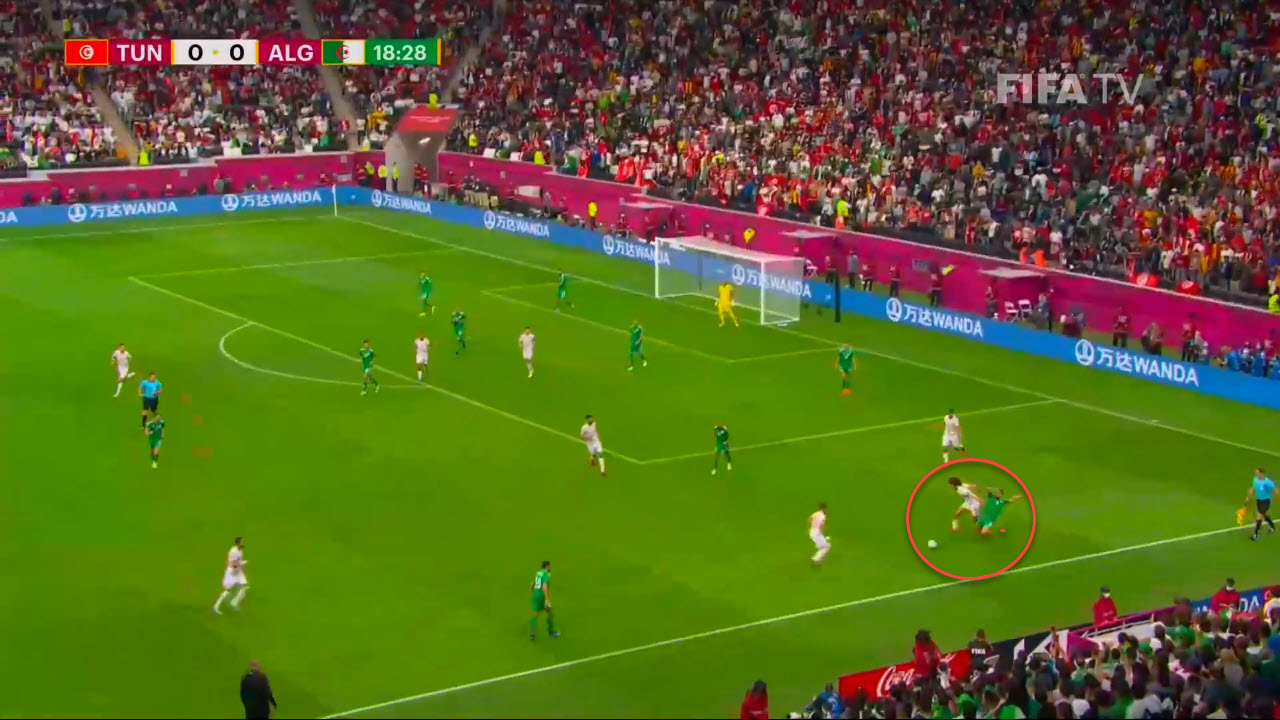 It is true that such huge efforts would affect the player’s attacking participation on the long run, however, these pressing times and defensive contributions can be perfectly monitored by the coaching staff according to opponent and to the desired attacking plans. Keeping the player fresh for attacks would also be extremely beneficial for the team especially at the times when he is more needed in attack.

Tunisia could have done much more in terms of shooting and finishing and the coaching staff should have made substitutions earlier in the match in order to give a boost to the team from an attacking perspective and avoid playing with tired players against a team who made several changes before the end of the 90 minutes. Mondher Kebaier preferred to wait until conceding the first Algerian goal in the extra time to make some changes in attack. But unfortunately for Tunisia, not only these changes were too late, but they were also tactically wrong. Subbing out Mejbri who was one of the best players on the pitch by disturbing Algerian players with his off the ball pressing while not committing mistakes when in possession and at the same time keeping a tired player like Msakni doesn’t sound like the right decision to make.

Msakni was already tired before the end of regular time and was obliged to play additional 30 minutes and the only argument for this was the hope of achieving an extraordinary individual effort with which a goal can be scored.

The basis of this argument was not really valid since the player himself was not physically fit anymore after the 90 minutes. Moreover, the conservation of Msakni on the pitch meant that all the other players would contribute with 150% of their energy in defence since Msakni couldn’t retreat to help in defending. Knowing that there are other useful attacking players like Firas Ben Larbi, Fakhreddine Ben Youssef and Yassine Chikhaoui who can replace Msakni perfectly and be more dynamic in the non-possession phase confirms that this decision was completely unnecessary.

Details like the one mentioned above about the decision to not sub Msakni out might sound like a normal decision and not a very impactful one. However, in such matches between teams with an extremely close and high level, such details can make the difference.

As you can see at the start of this first Algerian goal action, Msakni was advanced and wasn’t physically able to retreat and mark his opponent. That obliged Chaalali to leave his direct opponent and cover for Msakni to prevent the holder of the ball from passing towards the middle. At the same time, Ben Romdhane was advanced too and didn’t retreat to support Chaalali in midfield, which resulted in a huge space left in midfield (represented by the big red circle). 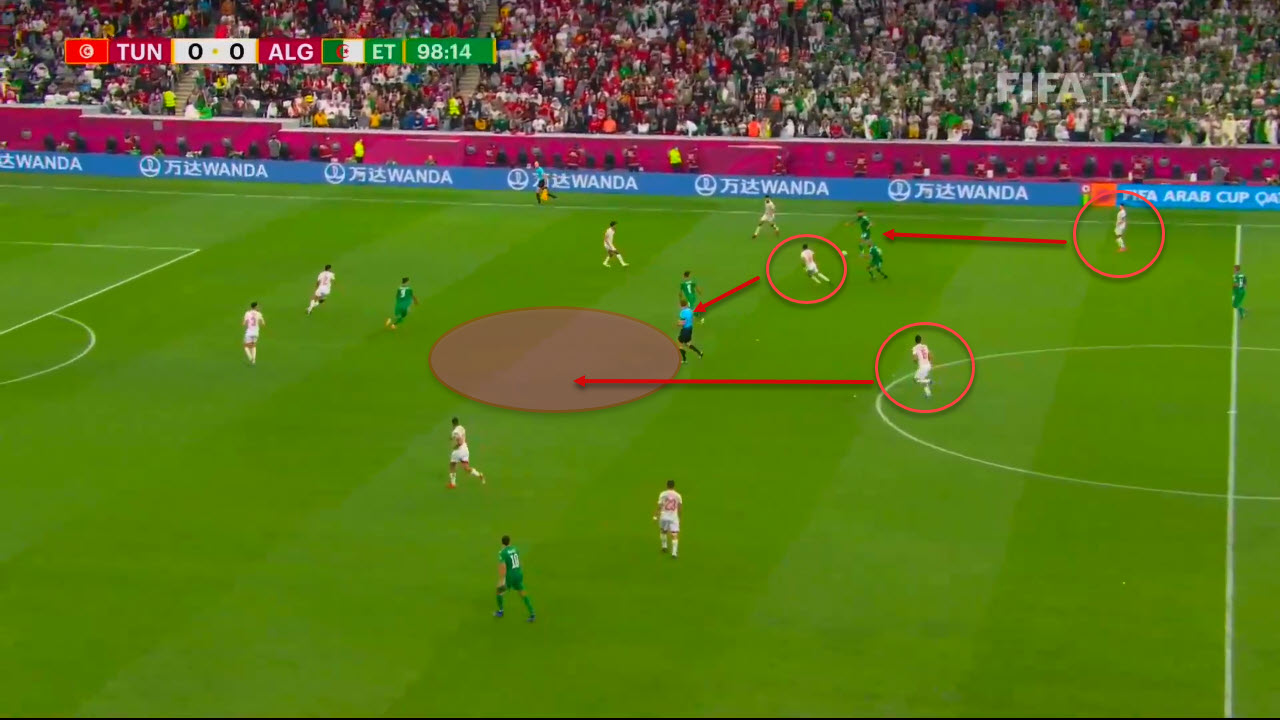 Such wrong defensive organisation helped Amir Sayoud in receiving the ball without being marked and finding the space and the time for shooting accurately and with power. Bounedjah’s back-heel facilitated the action for Sayoud even further since it confused Ifa who was marking Bounedjah and excluded him from the action, leaving Sayoud just in front of Talbi.

Plus, being aware of Tunisia’s goalkeeping issue and Hassen’s weakness in saving shots from distance gave Sayoud more determination and motivation to shoot from outside the box. 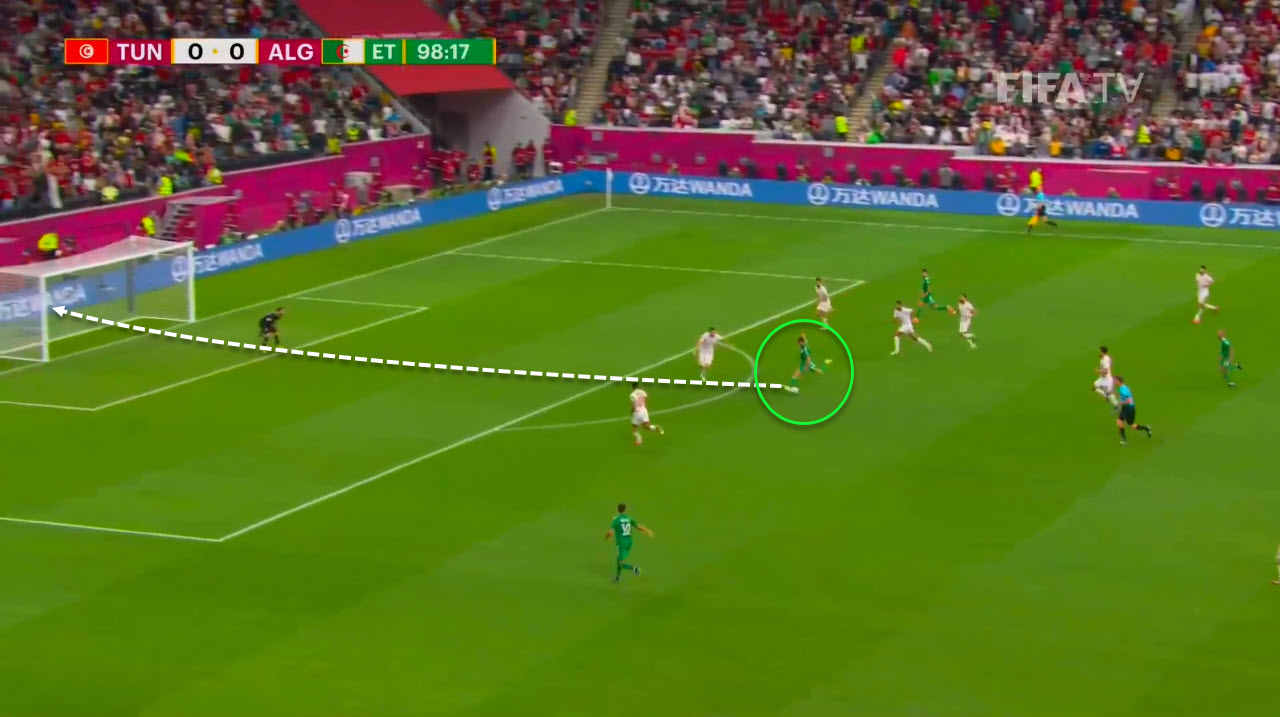 Apart from the goal, Tunisia’s defensive performance was not as bad as the result suggests. Tunisians were able to stop the danger created by the likes of Yacine Brahimi, Youcef Belaïli, Tayeb Meziani and Baghdad Bounedjah throughout the match and if not for the mistake that led to the first goal as well as a few other concentration mistakes, Tunisia could have finished the match without conceding goals.

They won 73 of 124 defensive duels with an average of 58.87% while succeeding in making 55 interceptions and 15 clearances. What needs to be improved however is the number of shots that the defence allowed in this match which equals 19, knowing that five of these shots were on target.

Despite the numerous absences and injuries, Tunisia were able to put on a solid performance in this Arab Cup final even though they committed a few mistakes that cost them the trophy. They should be proud of what they achieved and build on such performances to do even better in the upcoming Africa Cup of Nations with the return of the absent players who are considered as starters for their European teams.

For Algeria, the team will be surely delighted for having won this title despite all the difficulties and the big teams that they faced in the knockout stage. And with the return of the other big names from Europe for the Africa Cup of Nations, it won’t be easy for any African national team to beat this Algerian side.