In the summer, Inter were unable to retain their key players because of their financial situation. Even after winning the league, their head coach and key players, including Antonio Conte, Romelu Lukaku, and Achraf Hakimi all departed. To fill the vacancies, the Black and Blues recruited Edin Dzeko from Roma for free. While some thought the main partner of Lautaro Martínez would be Joaquín Correa, instead, Džeko was the man to succeed Lukaku’s role. The former Manchester City man was a surprise this season, despite being 35-year-old already, he stilled produced a consistently high level of performance since August. At the time of writing in 23 games, he scored 11 goals and provided four assists to his teammates, being one of the top goal scorers of his side.

This tactical analysis is a scout report that details the strengths and tactical roles of Džeko at Inter. The big Bosnian has done quite well at his new club, thanks to Simeone Inzaghi’s tactics to bring out the best of the player.

Džeko is a tall striker (1.93m) who possesses body strength, but he is not the conventional type of striker who only stays on the shoulder of the defenders. Instead, he is given an important and constructive role to connect plays in the midfield, helping his side to move the ball forward. Comparatively, his partner, Martínez, has more physical qualities and pace to make runs behind and that was a reason for Inter to setup in a 3-5-1-1 conceptually. 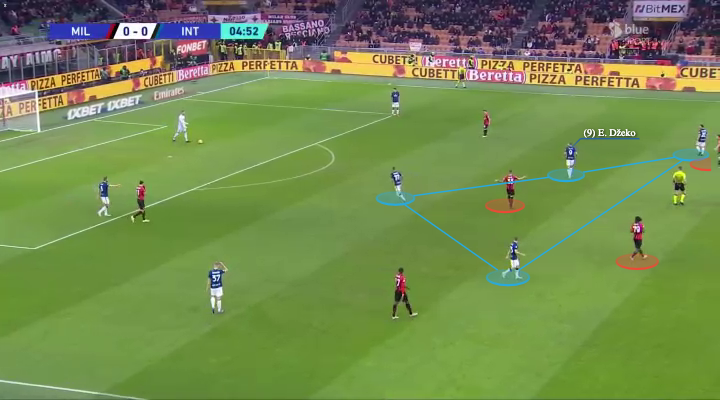 Džeko often plays deep to achieve a numerical superiority for his side in the midfield. Usually, Inter wanted to have one more players centrally to create that additional free player. Also, when Džeko dropped into the midfield, a question what also posed to the opposition centre-backs on whether they should follow the Bosnian or not.

The first example already shows Džeko’s deep positioning in Inter’s build-up. Against AC Milan’s 4-2-3-1, the Black and Blue initially had a 3v3 in the midfield but Džeko made it a 4v3, the “+1” advantage was clear. In this particular scenario, when Marcelo Brozović dropped towards the keeper, the attacking midfielder waved his hand as he was confused. If he followed Brozović, Džeko would be free in the midfield as Inter always had the wide midfielders stretching the opponent midfielders in half-spaces. 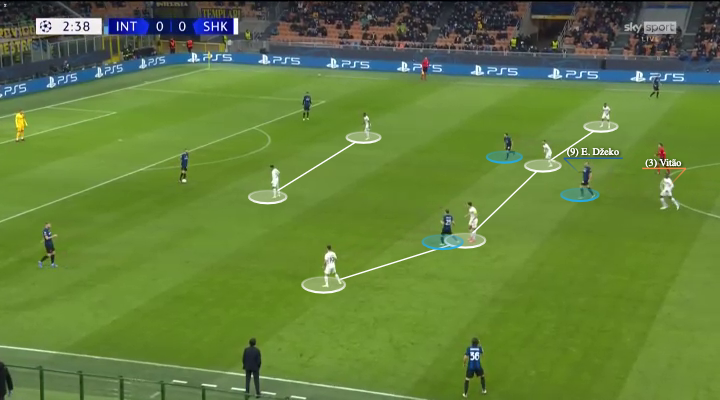 Since Džeko dropped into the midfield could secure a numerical advantage for his side, it allowed Inter to involve positional interchanges and rotations in their build-up too. This also helped the team to fix and reshape the defensive structure of the opponents. Against Shakhtar Donetsk who initially defended with a 4-2-3-1 shape, Brozović dropped deep to pull his marker out, and now the opposition stayed in a 4-4-2 shape with spacing in the centre increased. But this was not the only move, as the wide midfielders stayed a bit deeper, they pulled the 6s of Shakhtar out, thus opening spaces in front of the centre-backs. Then, it was Džeko who exploited that spaces to create a 3v2 midfield overload.

Nevertheless, that “+1” advantage was nullified by Vitão as the centre-back followed the Bosnian, but this was also a favourable situation for Inter’s 3-1-2-4. Now, Martínez was in a 1v1 with the remaining centre-back, and Inter also had the other two high wing-backs to attack the outside lane and that was man-man basis to release the individual quality. 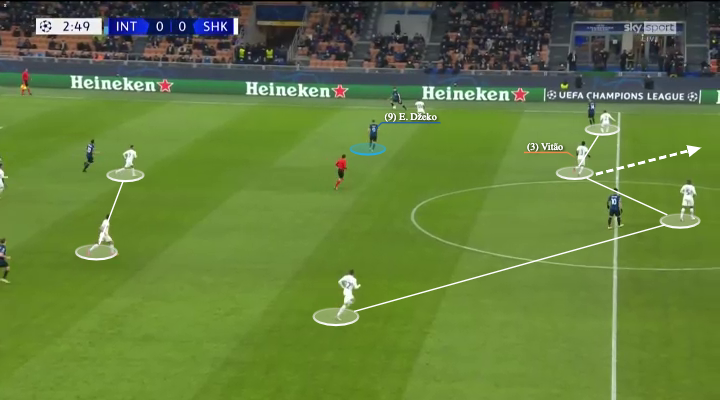 Džeko was great. Since Inter moved the ball sideways and used the width of the pitch, Shakhtar defence reacted by dropping back. And Vitão now decided to return to the defensive line to cover Ivan Perišić for his right-back, so to make the defensive line in a 3v2 situation. This was not a bad decision as the Croatian wing-back posed a great 1v1 threat and pace to attack spaces behind, but the move of Vitão also means Džeko would be free in the midfield.

Džeko did not need to move too much at all, instead, he stayed and knew the marker went away. Then, he offered a lateral option for the ball receiver, which was a simpler option to help the Black and Blues to progress. 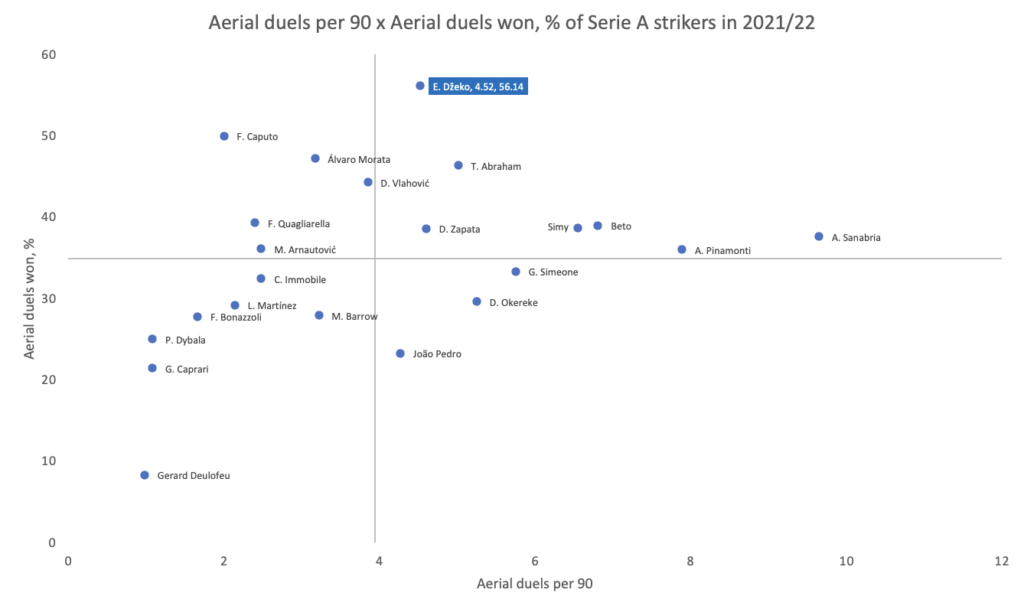 Apart from connecting plays in the midfield, Džeko, as expected, also possessed great aerial abilities to be the target of long balls. We drew the scatter chart to identify the physical level of the player, and indeed, he was the best among Serie A strikers. Although his attempted aerial duels was only 4.52 per 90, probably because of the style of Inter was not only about long balls, he maintained a higher success rate than anybody else at 56.14%, it shows his physical superiority has helped the team a lot too. 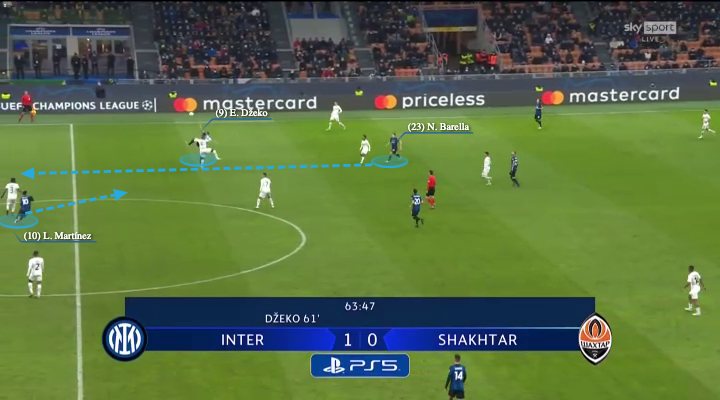 Inzaghi also used this strength of Džeko a lot. For example, in the build-up, if all short options or circulating options were closed, they would opt for a long pass and see whether the No.9 could meet it. Then, energetic players were deployed around the big Bosnian to collect the second balls, or simply making the runs to access spaces behind.

It was clear in this situation against Shakhtar, Džeko fought for the long ball and Martínez came to collect the second ball. Then, Nicolò Barella was the man who possessed great physical quality to attack spaces behind created by Džeko, as the striker pulled the centre-back out in the aerial duel.

In the final third & goal threat

Apart from dropping into the midfield and bringing his teammates in plays, as a striker, Džeko carried out his responsibility to score goals and helped his team a lot in the offensive third. 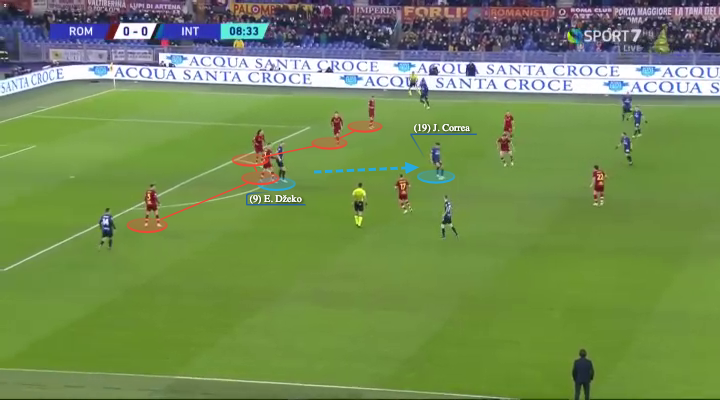 In the final third, sometimes the role of strikers swapped as Džeko had more freedom to interact with his partner. Sometimes the big Bosnian could be the man who fix the last line, allowing the other striker to drop and play between the lines, and his experiences allowed him to take the right action at the right moment.

For example, Correa received in spaces behind the midfield in the above image, and he was free to turn as Džeko did very well to create that space. When he saw the right centre-back of Roma wanted to step up and press Correa, he immediately used his body to block the path between Correa and Gianluca Mancini. 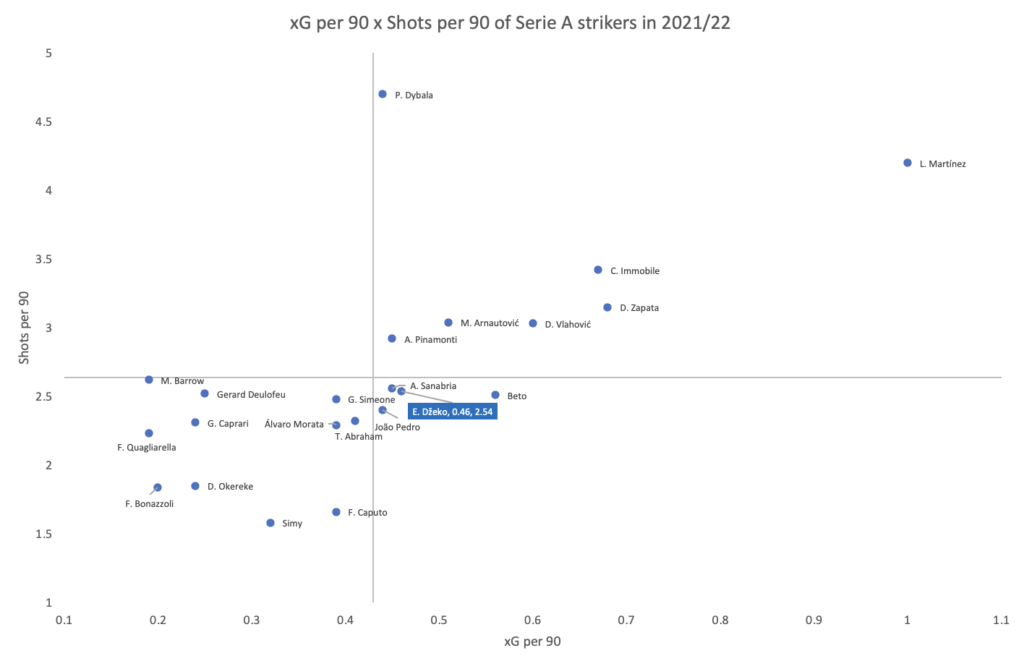 As demonstrated by data, Džeko was quite clinical as well. The scatter chart above summarized the threat to goal by Serie A strikers this season, Džeko was in an interesting category as his name stayed in the bottom left quadrant. Although his xG per 90 at 0.46 was not particularly high among other candidates, it was still above the mean, and what made him special was the low number of shots taken in each game. The former City striker only had 2.54 shots per 90, which was below mean and much fewer than the likes of Paulo Dybala and Ciro Immobile. That means even Džeko was generating goal threat, he did not need many chances to shoot and it was impressive as well.

In addition, Džeko also had 1.28 shots assists per 90, two assists alongside three second assists in total, suggesting he was not only a scorer but also a provider who could create for his teammates. 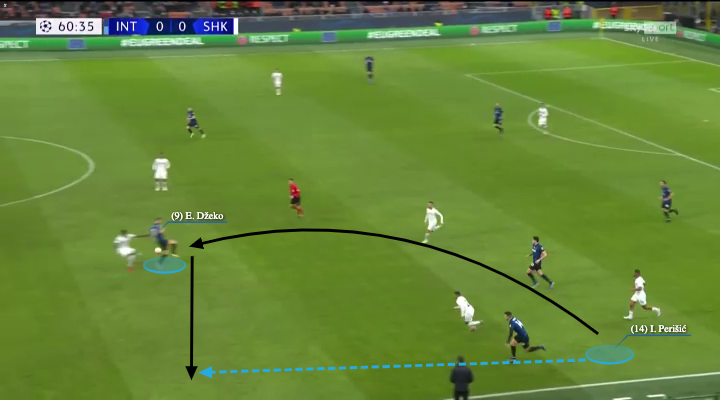 Then, we evaluated Džeko’s skillsets, and explain how his playing style allowed him to find his chance to shoot. He scored a brace in the UEFA Champions League game against Shakhtar to help his side qualifying from the group stage, and the first goal was a great example on what he could do for his side.

Here, Perišić used Džeko to play a one-two and burst forward from the flank. The Bosnian easily laid the ball off to the wing-back and took the centre-back out as usual, it also shows his ability to play in spaces and pressure resistance from behind. 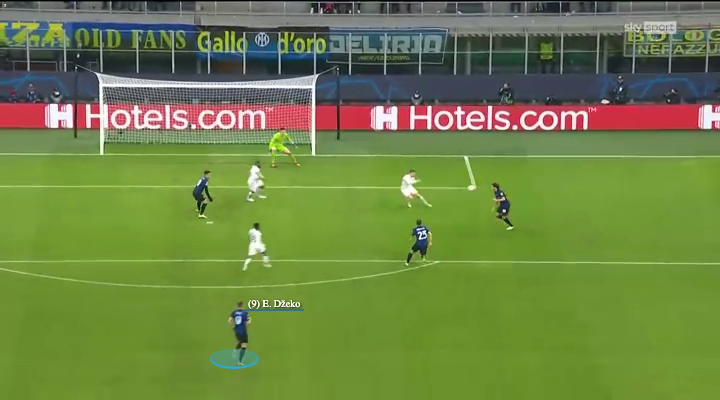 But then, Inter could not put the ball into the back of the net in the first wave of the attack. This was where Džeko impressed, as he moved forward but not too soon into the box after attempting the aerial duel. Because of his initially deep position, his marker would often track back quickly to cover spaces closer to the goal, so when Džeko stayed, he had a lot of space to shoot. This was the area where Džeko could show everyone his shooting ability and that was a vital goal to the team. 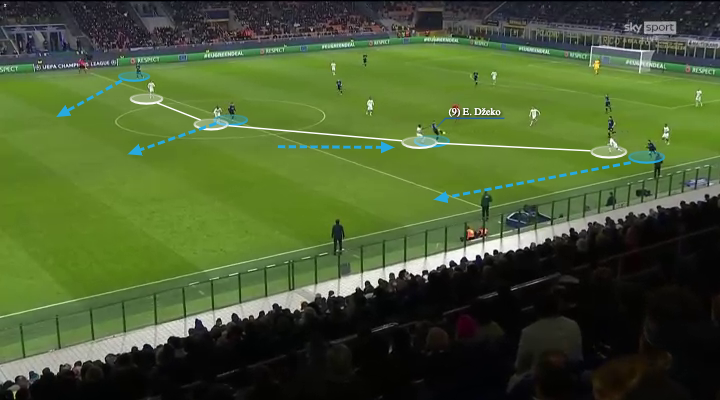 We could also analyze this goal from Inter’s tactical perspective, it was the 3-1-2-4 offensive formation favoured by Inzaghi in this season, and Džeko always did a great job to execute the tactics of the head coach.

In this angel, you could see how the front four posed threats to the high line. It was a man-man situation with width and pace to search for spaces behind. Džeko’s unparallel position with the other three high players was vital to break the defensive line, as now Perišić had great spaces to run behind of the right centre-back after Džeko pulled Vitão out.

In the penalty box, Džeko had the sense to smell the chances by moving into correct positions. Apart from staying around the last defender and heading the ball in, Džeko was also dynamic and adaptive to the opponents. His goal against Roma was a clever one, as he stayed on the blindside of the defender initially, the marker could only keep guessing. When Hakan Çalhanoğlu drifted towards the depth, the marker gussed and went to protect the six-yard box. However, the defensive action of the defender was read by Džeko, and the big Bosnian just moved to the centre instead of also going into the six-yard box. The entire defensive line was caught and he converted the chance, 2-0.

The PPDA of Inter in Serie A was 11.06, ranking 8th in Serie A, this means they were not regarded as one of the most intense pressing teams in the league. But even staying in a block with a lower engagement line, Džeko also contributed in this phase. 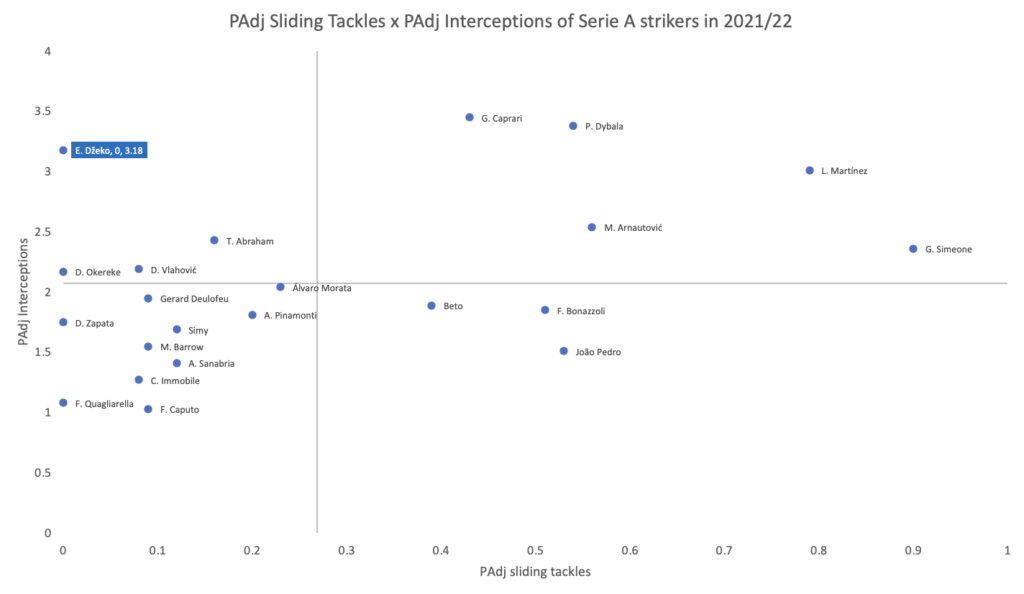 Džeko had impressive defensive statistics as we drew this scatter chart. Although the Bosnian did not dive into challenges as he had 0 PAdj interceptions, it was not a big issue as that was just a matter of defending style. His defensive contributions valued at PAdj interceptions at 3.18, which was the third of the league, only behind Dybala and Gianluca Caprari. 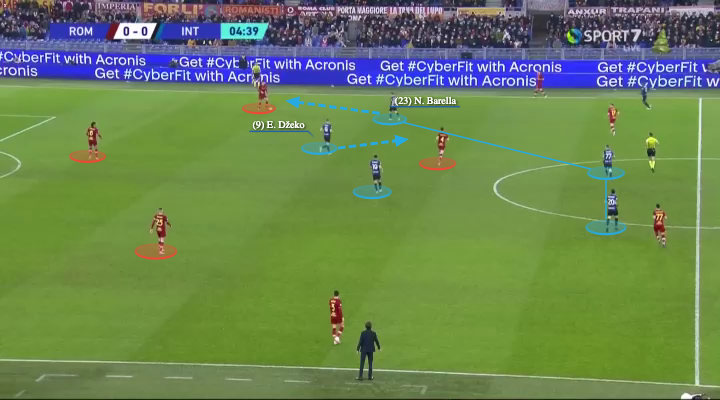 With his experiences under different coaches, the defending of Džeko was quite good even he did not lead intense pressing. He knew the requirements of Inzaghi were to protect central areas, cover the opposition 6s and he did that mostly correct. As the striker of Inter, he knew the importance of rather holding the press and stayed to cover. For example, Inter would commit the wide midfielder to press a back three as Barella did above, and usually Brozović was deep, the task to cover the holding midfielder fell onto the strikers as Džeko retreated to cover as shown above.

As we have shown in this analysis, Džeko was an important player to Inter in the attack. Age was only a number to him, and his professional commitment to the game plan and the tactics of the head coach was a great role model to the rest of the team as well. No wonder their CEO Giuseppe Marotta was happy about the outcome of the transfer, and said “Lukaku was sold for €115 million and we bought Dzeko for nothing. And, on the pitch, there isn’t much difference.“.

Previously, Džeko won the league title in England and Germany, and now he also had the chance to claim the Scudetto with Inter if the champion could keep the standard until May!