Serie A 2021/22 preview: How Milan’s defence can cope with Lazio’s Sarriball – tactical analysis

After an eventful summer and quite a few managerial changes, Serie A’s start didn’t disappoint, and the teams immediately showed a glimpse of their potential.

Only a couple of rounds into the season there are five teams with the same number of points (6), after winning both of their first two games. While many of the teams saw their key players and managers leave in the summer, Milan are the only team in the current top five that haven’t changed their coach. Stefano Pioli started the campaign strong despite the squad changes and it seems like the new additions to the squad have already adjusted well.

All of Lazio, Inter, Roma and Napoli, on the other side, are playing under new managers and have done well at the start of the season, grabbing the full pack of points.

Milan are meeting Maurizio Sarri’s Lazio in the third round of Serie A, with this game being the first real test for both coaches this term. Sarri’s return to Italy is going pretty well so far, with the team having the best goal difference and being top of the table.

This preview in the form of tactical analysis will examine both teams’ tactics and explain how they could expose each other.

What could be expected by Pioli’s Milan?

Despite the successful start, Milan might find it difficult to balance out their performance with three big games in a matter of eight days. Pioli needs to consider his starting XI for the Sunday clash well as the Rossoneri will be making their Champions League debut against Liverpool during the week and also have a tough visit of Turin against Juventus next weekend.

Alessandro Florenzi might get a chance to redeem himself for his poor performance for Italy lately and replace Alexis Saelemaekers in the starting XI, as the Belgium international could be the first choice for the midweek fixture.

Milan’s flexibility will be tested in the early stages of the season, with the three demanding games that will show if the team have the needed squad depth. Florenzi replaced Saelemaekers in the second halves of their last two games and despite naturally playing as a right-back, Pioli could use his crossing and passing abilities in a more advanced position against Lazio. His presence offers more versatility on the right flank, where he could be used in every line.

Despite losing two of their key players Gianluigi Donnarumma and Hakan Çalhanoğlu, their replacements Mike Maignan and Brahim Díaz have adjusted well. The goalkeeper conceded only one goal in the first two games, while Rossoneri’s new attacking midfielder scored one and assisted one, showing potential to be the team’s new key chance creator. His movement supports ball progression and allows his attacking teammates to move into goalscoring positions, while his passing abilities help in creating chances for them. 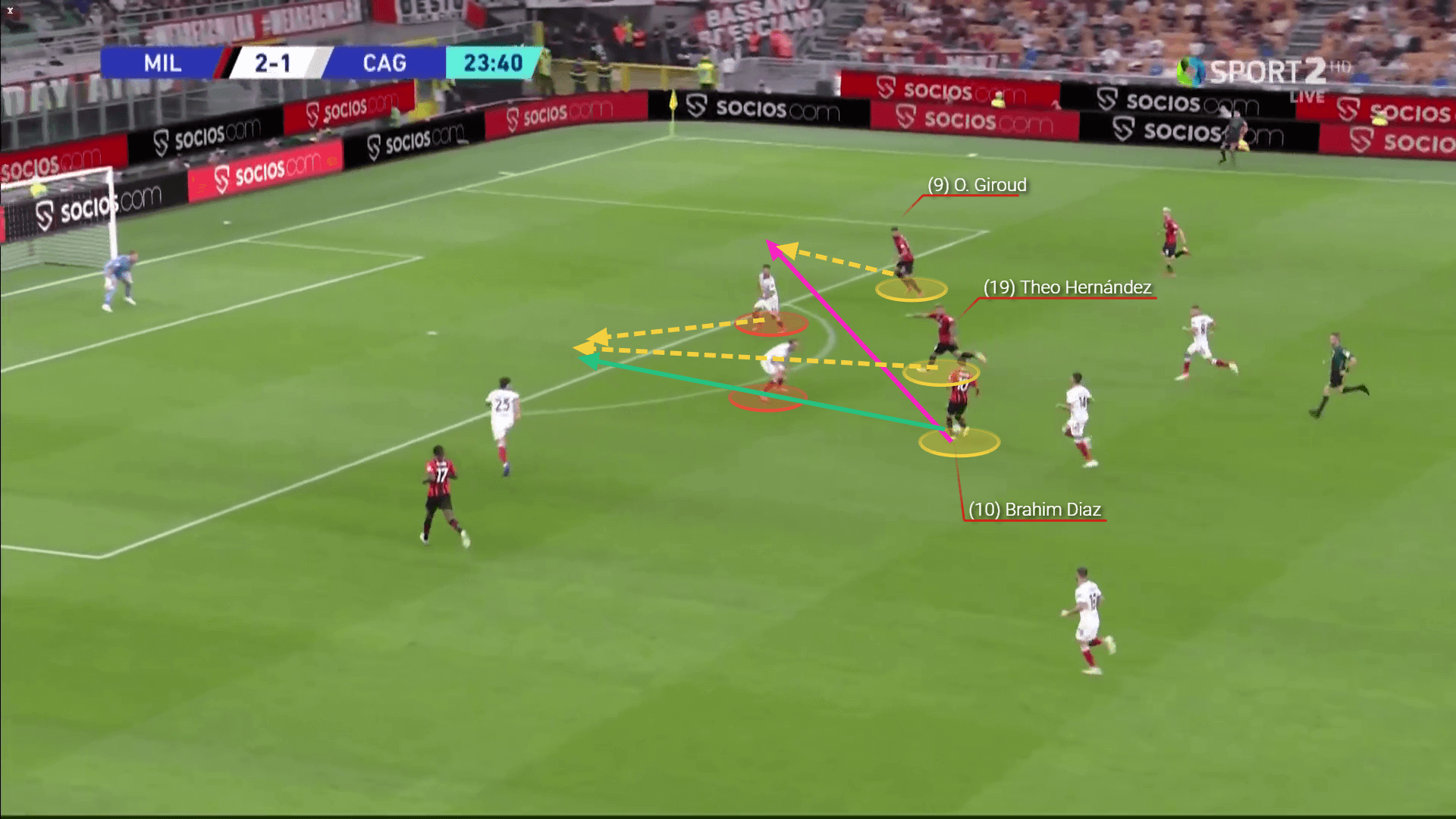 He advanced the ball and instead of passing it to Theo Hernández he saw the uncovered Giroud and passed the ball to him, while the left-back dragged Giroud’s marker out of position.Lazio have also performed well defensively, but the presence of Olivier Giroud could be a deal-breaker against them. The ex-Chelsea player already scored twice and is up and ready for his new Serie A challenge, and with Díaz and Rafael Leão providing additional threat, Lazio’s defensive line could be seriously tested.

The possibility of Zlatan Ibrahimović coming back from injury and getting some playing time could give Milan more confidence against the “Sarriball” approach and increase their chances on a counter.

Simon Kjær and Fikayo Tomori’s will have to prove their efficiency once again and while their partnership has proven to be successful so far, Lazio’s 4-3-3 attacking movement could be a headache, especially with Immobile’s presence.

Rossoneri’s defensive line might need to drop deeper in possession as being highly positioned could result in plenty of free space for Lazio to exploit in case of a turnover. Should they win the ball back midway, Lazio have the speed and the technical ability to threaten the goal without giving their opponents a chance to re-organise and react.

What have been Lazio’s strengths under Maurizio Sarri?

Lazio started the 2021/22 season with a 3-1 win over Empoli and a 6-1 win over Spezia. Sarri’s side were convincing in their attacking approach and didn’t allow Joaquín Correa’s absence to be noticed. Ciro Immobile continued to be the team’s hero in front of the goal, not only finding the net in both games but scoring a hat-trick against Spezia, to lead the Serie A goalscoring charts with four goals.

The “Sariball effect” was noticeable in their win over Spezia where the team had 60.81% of the possession and created 18 goalscoring opportunities. Their new addition in attack Felipe Anderson scored his first goal for the team, adding up to the good impression from his first game where he assisted for Lazio’s equaliser.

Lazio are expected to rely on creating chances by overloading the opposition half and creating chances by using through balls and a lot of movement. Milan need to limit the spaces between the lines and have a high defensive discipline in order to prevent the opposition from using their strengths. Forcing the team out wide would decrease their attempts on the goal as Sarri’s side don’t reply on crossing and might find it difficult to penetrate through their crossing attempts.

Apart from using their through ball ability and movement to expose Milan, the Biancocelesti need to take advantage of their set-piece opportunities. Giroud and Ibrahimović could give the Rossoneri a huge aerial advantage, but Lazio can rely on Francesco Acerbi’s proficiency in the air as well as Sergej Milinković-Savić’s height and set-piece ability, which in combination could catch Milan off guard.

As our analysis showed, both teams have their weaknesses and need to increase their defensive awareness in order to stop the opposition from scoring. Sarri’s approach fits Lazio well and it seems like this won’t be an obstacle against the settled Pioli. Both Milan and Lazio have solid attacks and the outcome might depend on who is going to outwit the other tactically.

WEURO 2022 preview: What could be expected tactically from the Netherlands vs Sweden clash? – tactical analysis

England and Norway started their UEFA Women’s EURO 2022 successfully after wins over Austria and Northern Ireland, while the rest […]