At this early juncture of the Bundesliga campaign, we just witnessed a telling tale of last season’s top two. While RB Leipzig have lost three and won one, Bayern Munich have won three of their opening four, on top of poaching arguably Leipzig’s best midfielder, Marcel Sabitzer. This tactical analysis will take a look at the tactics of both sides, and how it ended up in an emphatic three points for Bayern. 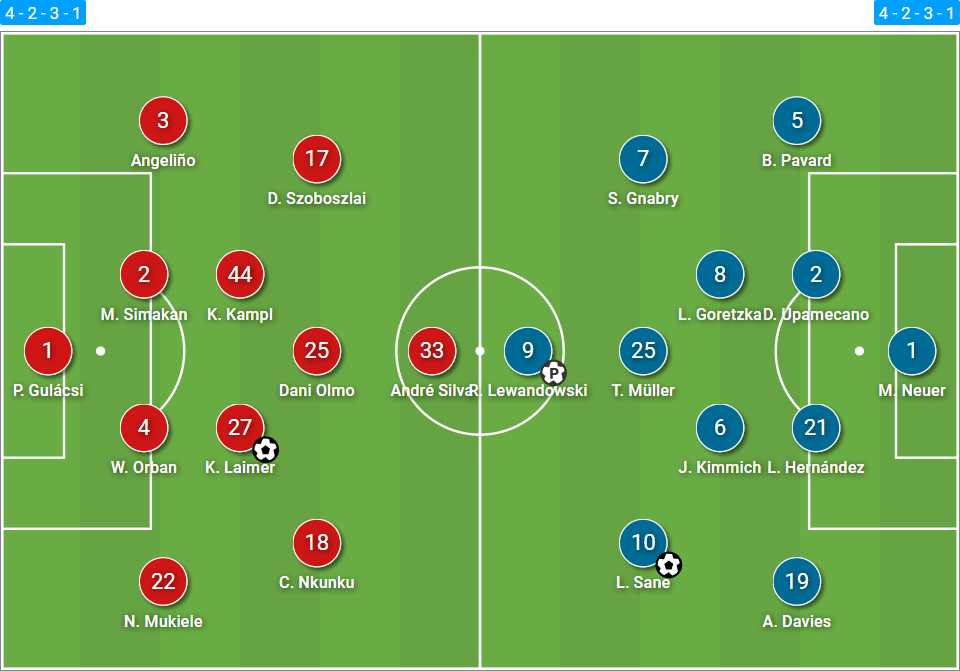 We saw a few changes from Jesse Marsch after Leipzig’s 1-0 loss to Wolfsburg, namely the full-backs, the double pivot in midfield, and some of the attacking unit. Mukiele and Angeliño came in for Lukas Klostermann and Joško Gvardiol respectively, while Tyler Adams and Amadou Haidara made way for Laimer and Kampl. For the attackers, Olmo replaced Emil Forsberg.

Julian Nagelsmann had an interesting conundrum to deal with, returning to the Red Bull Arena for the first time as Leipzig coach. He stuck with Upamecano to face his former club, but Marcel Sabitzer had to accept a bench role in this match. Pavard returned from injury to make his first league start of the season, while Hernandez replaced Niklas Süle at centre-back. Sané replaced Jamal Musiala on the left in the attack.

Leipzig had a decent first-half – but capitulated in the second

Leipzig have been nowhere near the level they reached last season under new coach Marsch. This is not to say they’ve been awful by any stretch of the imagination, but they have been decidedly average as a team, bar the opening day victory via a couple of Szoboszlai wonder strikes. xG tables have them around 10th in the league, slightly higher than their actual position of 12th. Their main problem has been on the defensive end, they’ve been making far too many passing errors, which continued in this game, and whichever double-pivot Marsch has chosen, simply put, hasn’t been working.

They have, however, been utterly ravaged of some of their key squad members. Firstly, losing their world-class head coach was never going to be easy, and to see Upamecano leave quickly after must’ve been a dagger in the heart. The final blow was losing Sabitzer to Bayern as well – an absolute stalwart of Leipzig since their 2. Bundesliga days. He grew into a mature and composed central-midfielder under Nagelsmann – something that Leipzig sorely missed today. Kampl’s poor touch heads in the direction of Goretzka, who eventually lays off the ball to Sané. 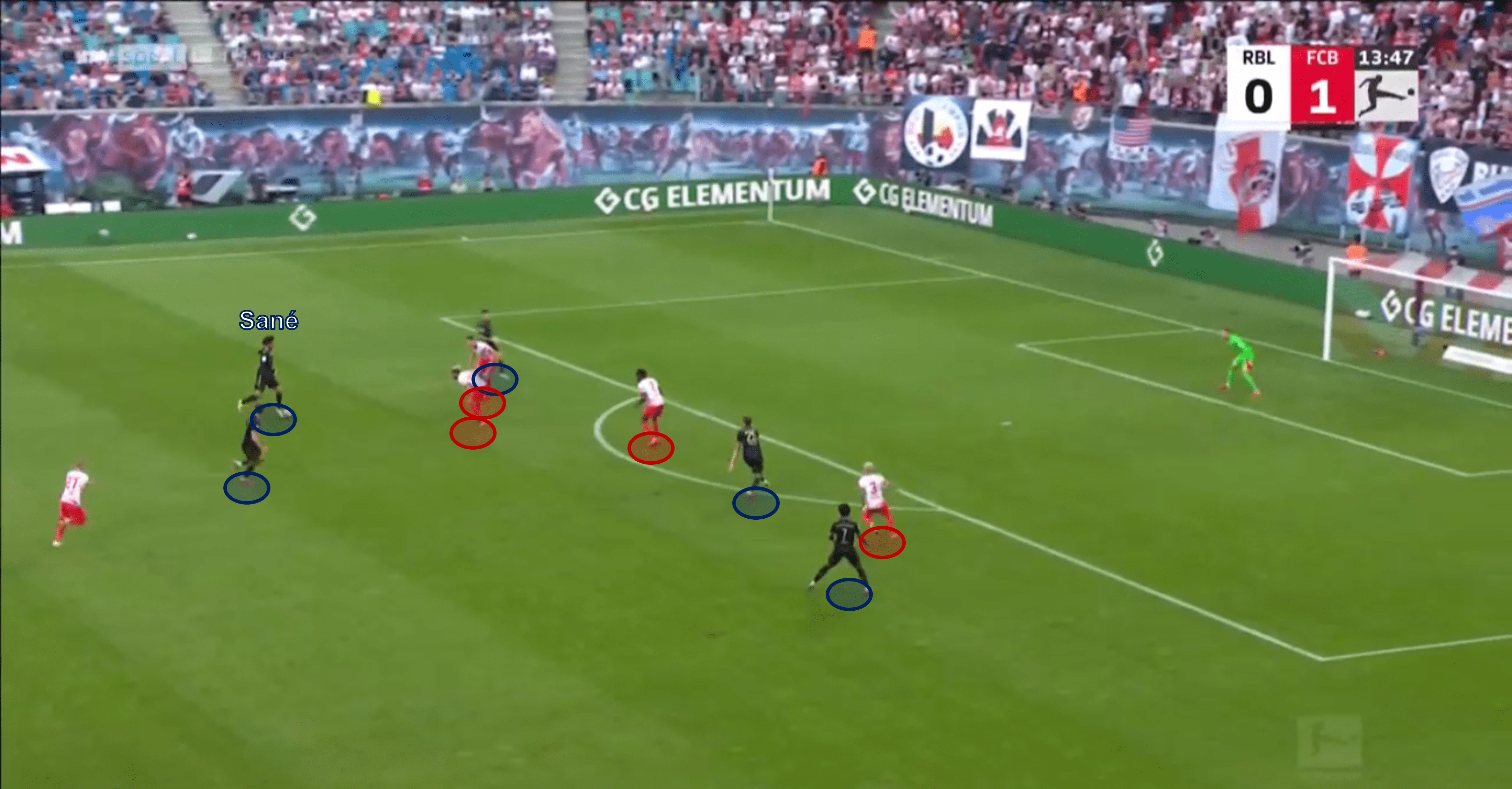 Sané has several passing options to explore, and Gnabry on the right is the choice, who takes a blocked shot.

Now, Kampl did have a couple of hazy moments during the match, but he wasn’t awful for the entire ninety minutes, it must be said. In fact, he was the orchestrator of many of Leipzig’s brighter moments in the first half – he took one shot and created two assists in that half alone. None of their chances were exactly clear cut, but, bar a converted penalty by Lewandowski, Leipzig absolutely had a higher volume of chances inside the first 40 minutes of this game. They did well when turning over possession to get the ball quickly into the final third.

If one positive can be taken from Marsch’s time in charge so far, it is the fact that at least the identity of his playing style is very clear. Granted, it is a very similar style of play to Nagelsmann, but there are a handful of Marsch tweaks that are clear to see. The line of engagement seems to be a touch higher, and there is a heavier emphasis on building up through the channels, rather than through the centre. This has, however, resulted in fewer chances for their striker, Silva, and more for their wide players. 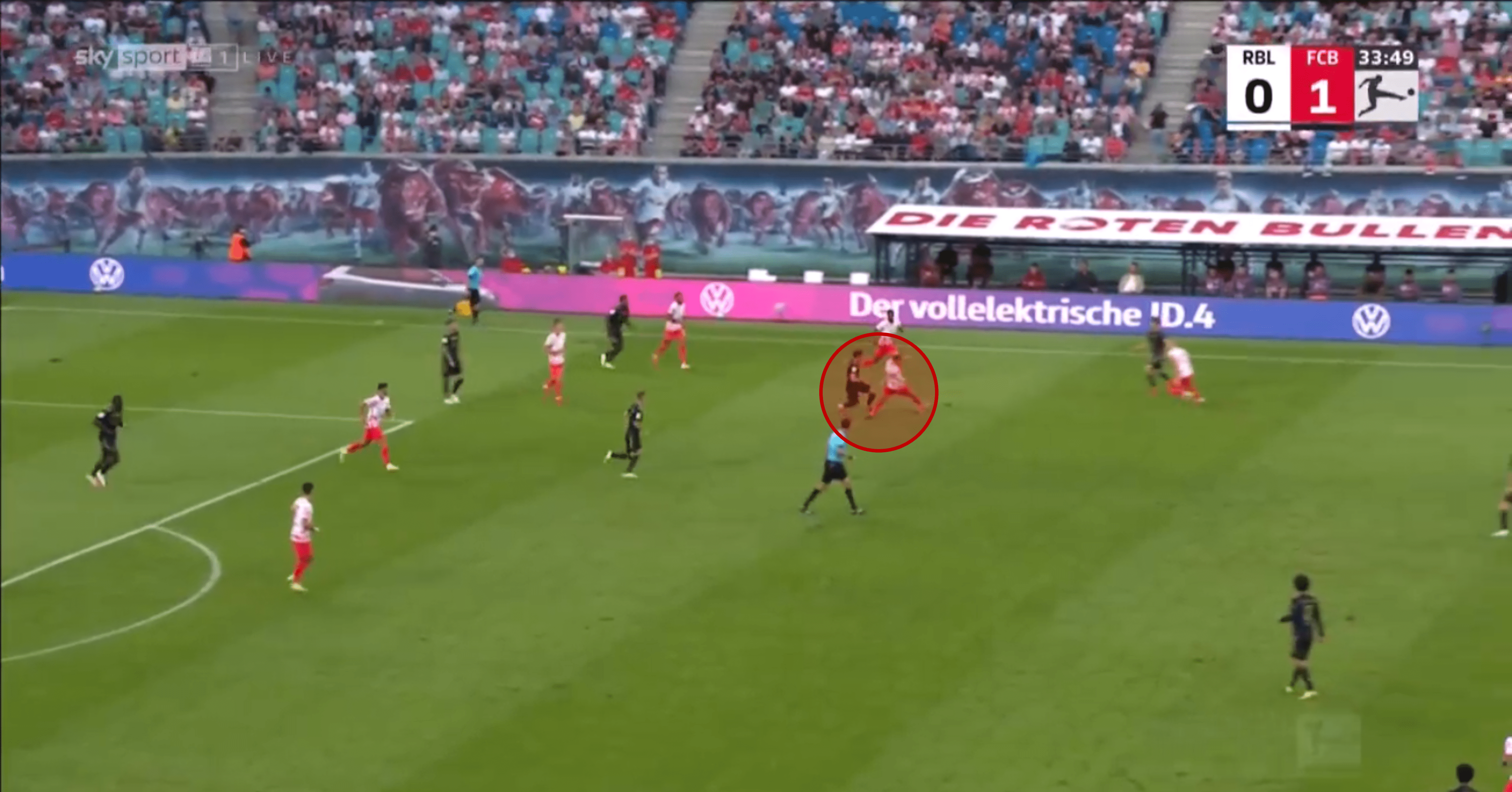 Kampl here cleverly wins the ball back high up the pitch. 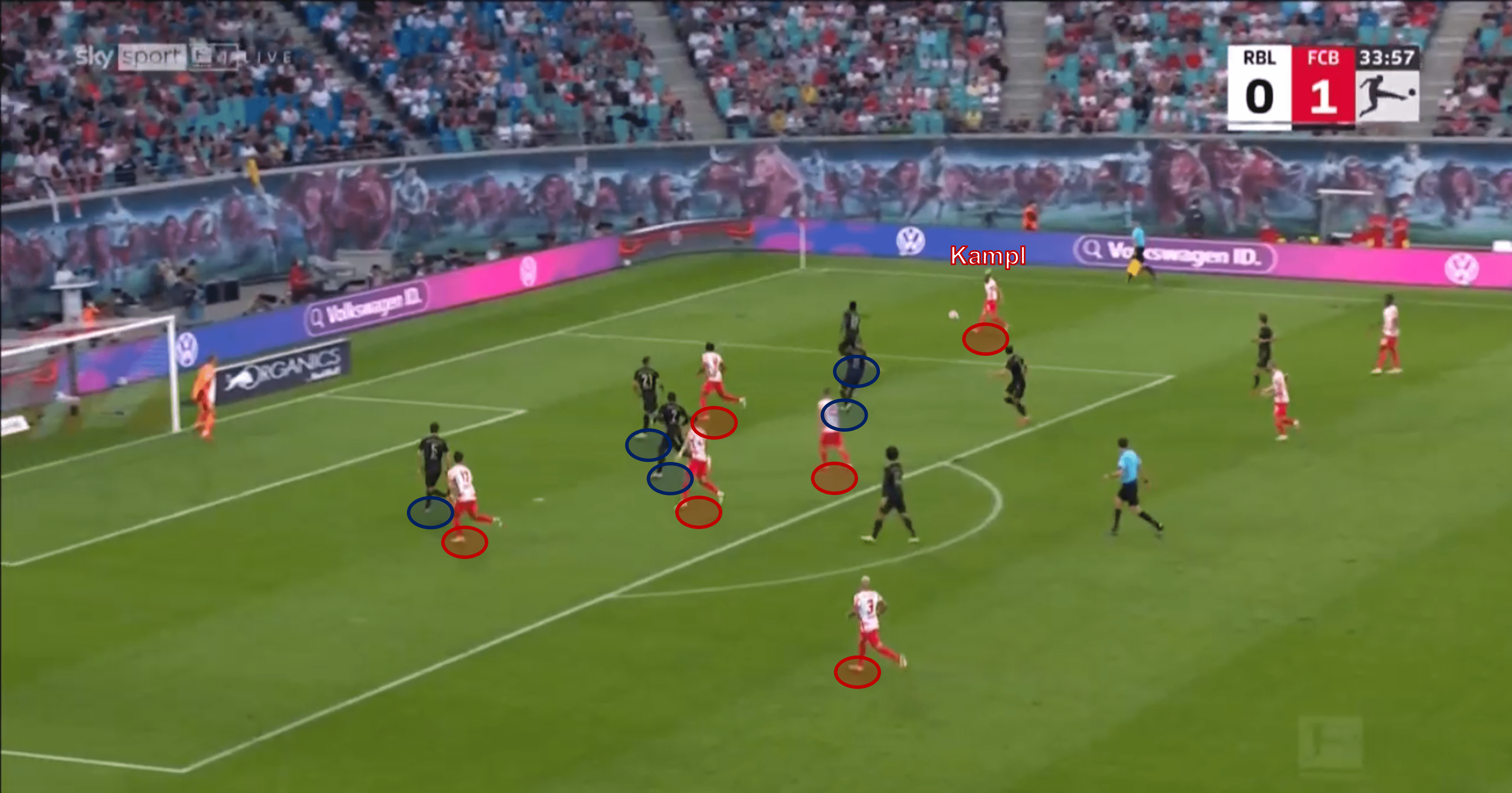 He also ends up with the ball on the right-wing, before crossing it in towards Angeliño out wide.

Again, none of their chances were clear cut, but the signs for future goals are there. Although it should be noted that Bayern across the last 12 months or so, have had a pretty shaky defence – Leipzig should have done a better job at breaking them down. Bayern’s midfield duo of Goretzka and Kimmich have especially been struggling for form as of late, but Leipzig failed to capitalise on that. They seemed to lag behind the pace of the game – it was something Marsch should have noticed.

While Leipzig, you could argue, had the better of the first half, despite being 1-0 down, Musiala coming on at half-time for Gnabry truly changed the course of this game. His directness and dribbling ability is becoming second-to-none, with echoes of a prime Franck Ribery emanating from his performances on the pitch. That ball seems to be glued to his foot, and defenders simply don’t know any way of stopping him.

He is a player of very few shortcomings, and none of them have to do with his output in this match either. He came on, provided one goal, one assist, and went about his business with the usual maturity, awareness, and commitment that we are used to seeing by now. He grabbed a smart goal within a minute of being on the pitch, and he managed to boost Davies’ assist number in the process. 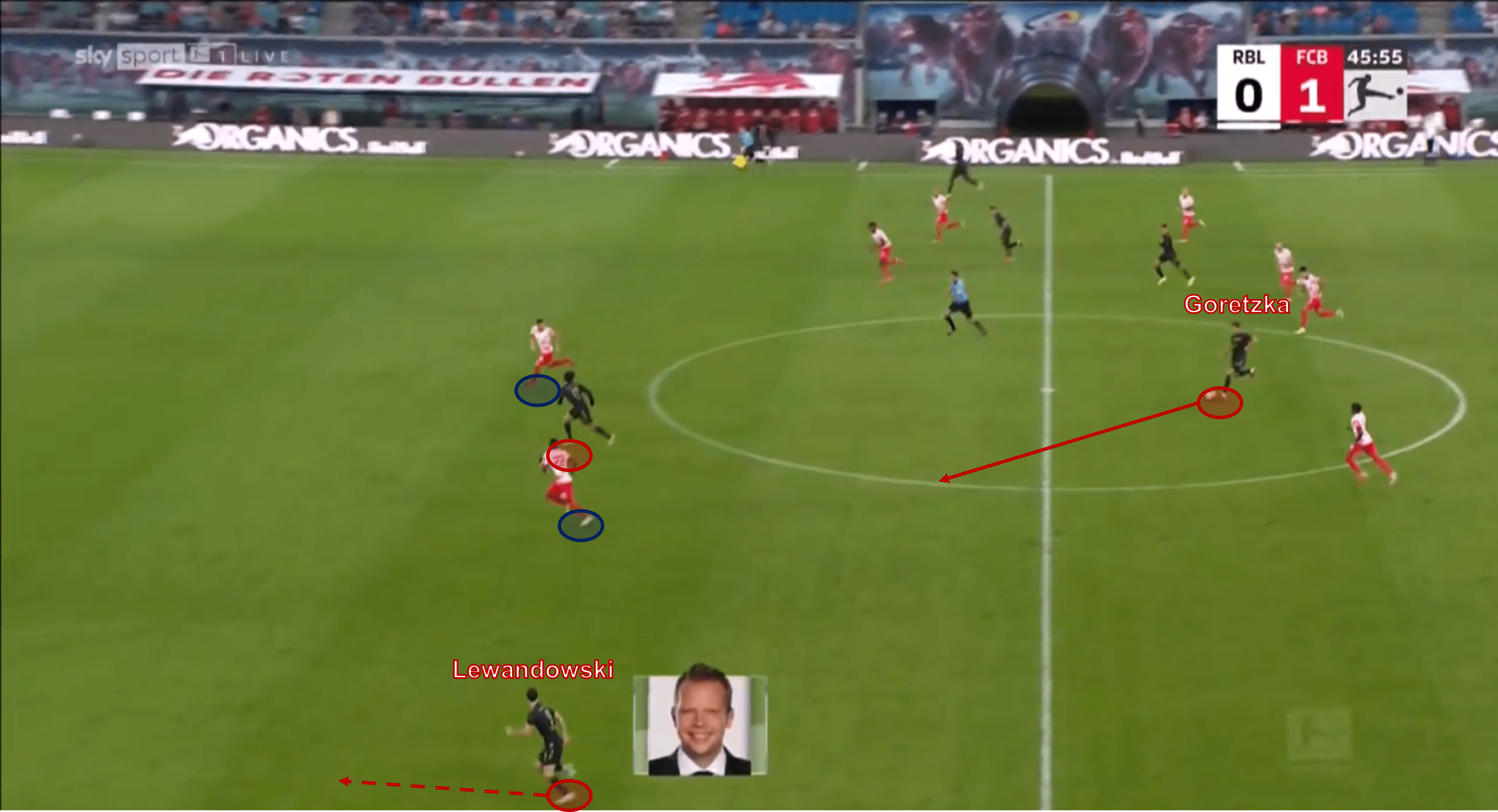 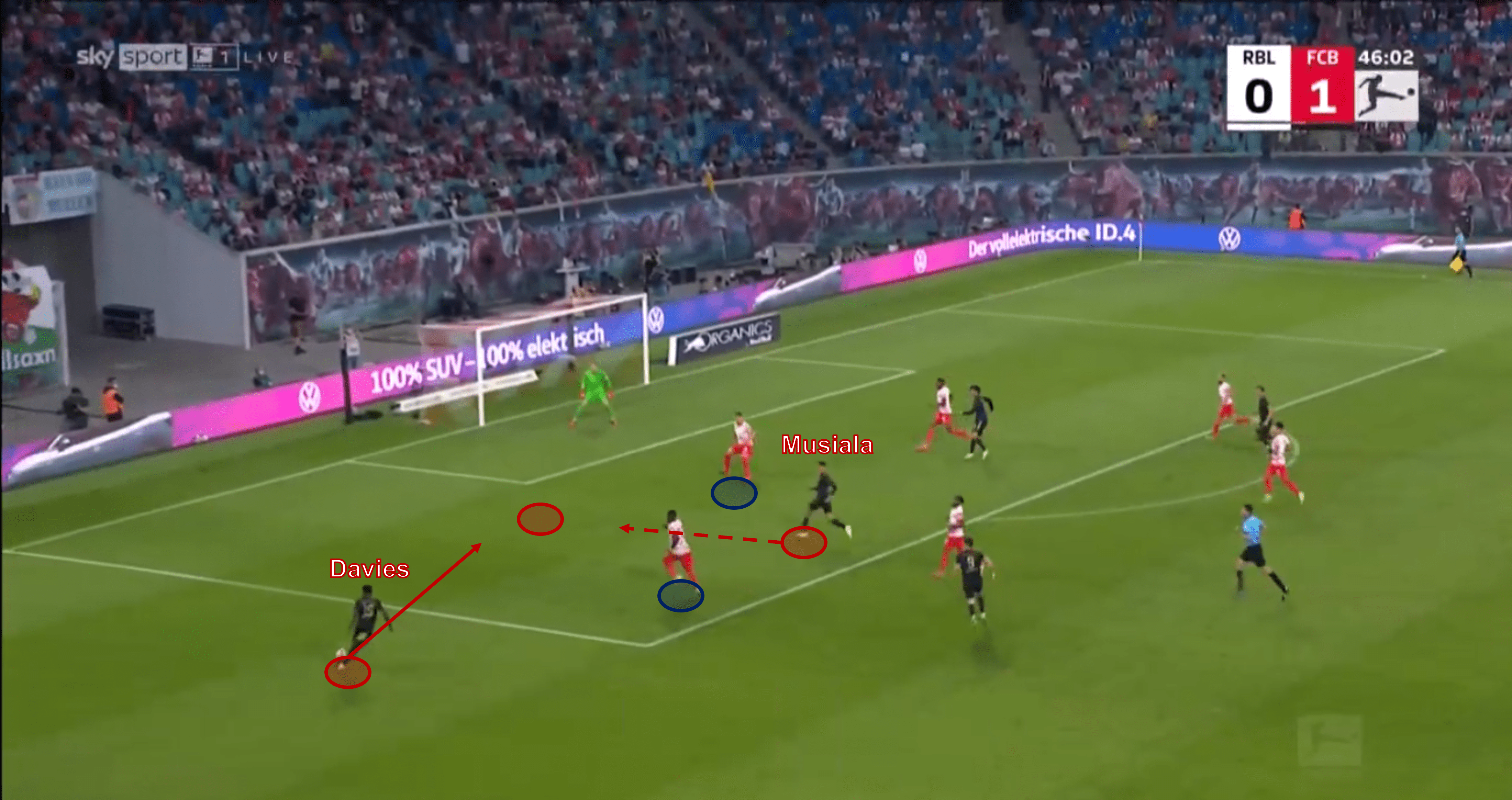 Davies pitches the ball into the area, for Musiala to meet and score into the bottom right.

We also saw a renaissance of a fantastic talent in the form of Sané on that left-wing. Despite being left-footed, and modern wingers typically preferring to play on the opposite flank to cut inside, his imitations of Robben ever since joining the club have been wildly underwhelming. In this game, however, back on his preferred side, Sané was the ringleader of several Bayern attacks, thanks in part to his elegant ball-carrying or runs in behind in the transition. 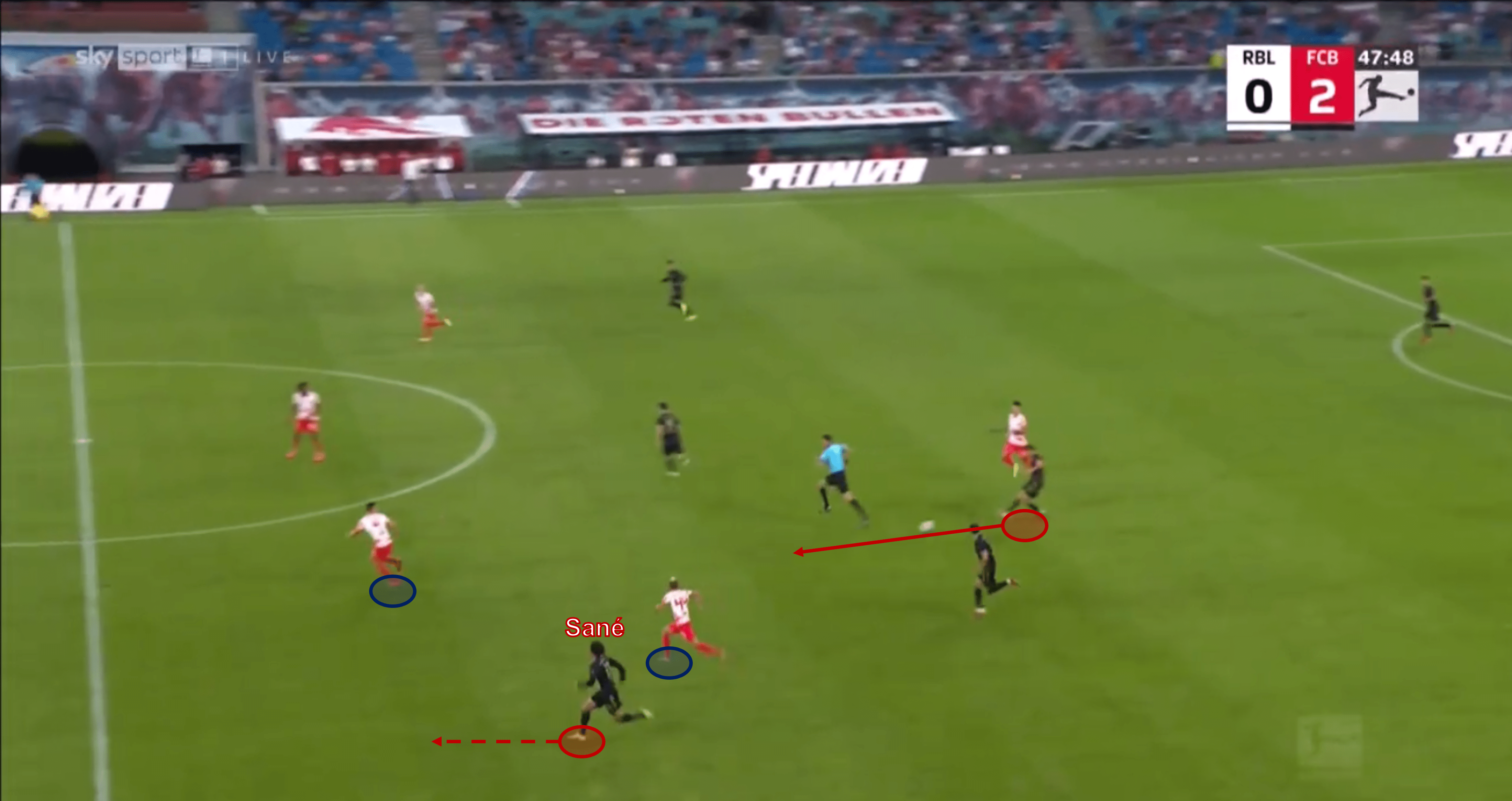 Just one example of Sané’s wise running which earned Bayern several opportunities in the transition.

His ball-carrying alone created a number of high-quality chances for Bayern, and a handful for Lewandowski, who had an unfamiliar cold day in front of goal. Sure, he scored a penalty, but from open-play in this game, he was underwhelming. Alas, all great players have subpar games. Sané, on the other hand, completed three dribbles, created four chances, and took two shots, one of which was Bayern’s third goal.

It was this goal that summed up the game itself rather nicely. It was formed from a Leipzig mistake in midfield, conceding possession, and Bayern’s star-studded front line taking full advantage of the situation. Musiala and Sané combined nicely to move Leipzig around and score the third, which, at that point, was the nail in the coffin 54 minutes into the game. 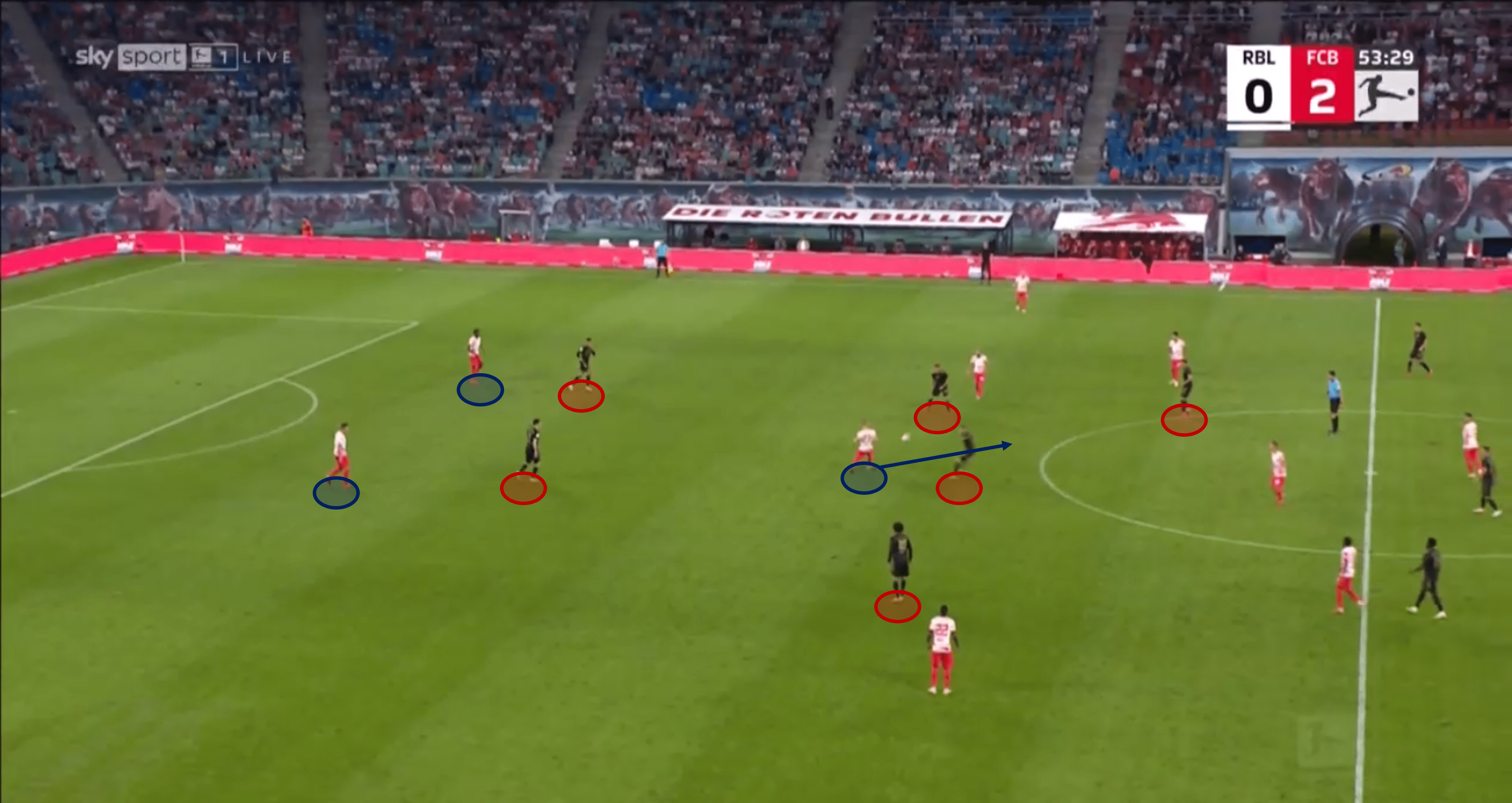 Here, Laimer sloppily loses possession to a Bayern player with a poor pass. 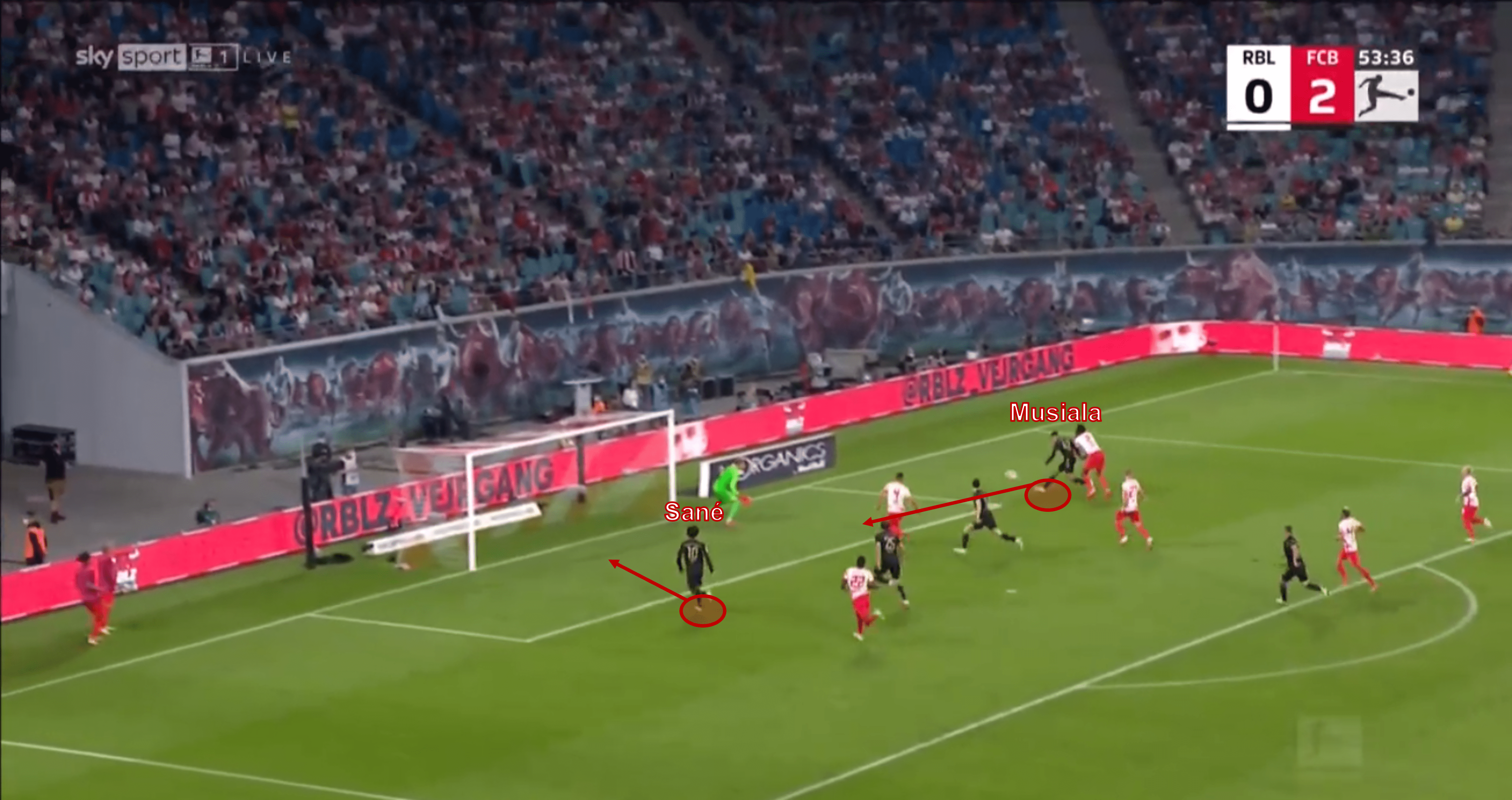 Eventually, the ball comes to Musiala inside the area, who finds Sané with a cutback.

It was a resolute performance from Bayern overall. It says a lot about their team this season when their star-man Lewandowski can have an off day, and yet they are able to score four against a team who are supposed to be title rivals once again. It’s a statement victory early on in the season. Wolfsburg might still be first for now, but even their underlying numbers suggest they aren’t quite at Bayern’s level yet.

While different xG models will rate it slightly differently, this game was somewhere in the region of 0.4-3.5  xG in favour of Bayern. The difference that Musiala made after half-time was pretty astounding, and from that point on, the Bavarians found their rhythm and waltzed through this game. There was a period during the 60th-80th minute where no action happened at all, it was just Bayern maintaining possession and frustrating Leipzig. Early call, but not a brave one, Bayern look set for 10 in a row when it comes to domestic crowns.