After a disappointing debut match of the season versus Mainz, RB Leipzig got back to winning ways on Friday evening in an emphatic 4-0 victory versus Stuttgart, who on the converse won their first match in a vehement display of attacking endeavour. This tactical analysis will take a look at the tactics of both sides and how it ended in three points for Leipzig in the Bundesliga. 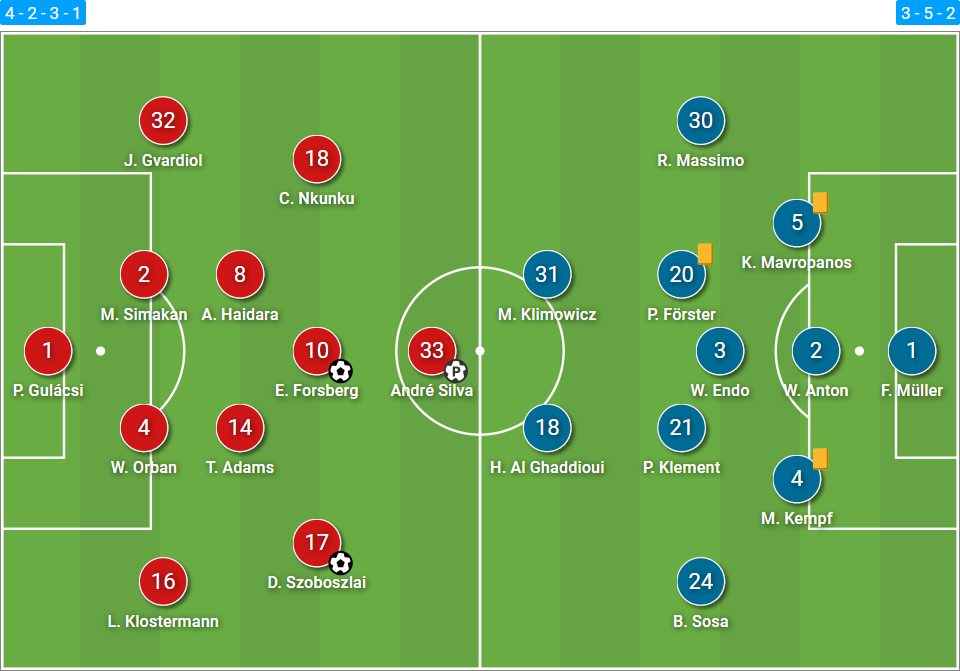 Jesse Marsch stuck with the 4-2-3-1 that saw them fairly comfortably outperformed against Mainz in the last match, but a few position rotations and player swaps occurred. Firstly at both full-back positions, where Angelino and Nordi Mukiele made way for Gvardiol and Klostermann respectively. Then further up in midfield, Kevin Kampl was replaced with Amadou Hairdara, allowing Forsberg to return to his customary #10 role after a game at left-wing against Mainz. Szoboszlai also made his full debut for Leipzig on the right-wing, with Nkunku moving over to the left flank.

Stuttgart, alternatively, made very few changes from their opening day dismantling of SpVgg Greuther Fürth. Their back three and goalkeeper remained the same, so was the same for their midfield bar one change in central-midfield, with Atakan Karazor making way for Klement. The forward line also remained unchanged. Matarazzo Pellegrino’s only change, Klement, did actually end up as one of Stuttgart’s better performers on the day, in all fairness. They just came up against a Leipzig in full attacking flow and synergy.

Jesse Marsch, as a result of being a coach coming off of the Red Bull coaching conveyor belt, he unsurprisingly likes his side to play quick vertical passes in possession with a high pressing line. This shone in this match, where as soon as Leipzig won back possession, they immediately looked for the forward pass. This was aided by both of the full-backs positioning themselves high up the pitch so Leipzig’s attacker could tuck in centrally. 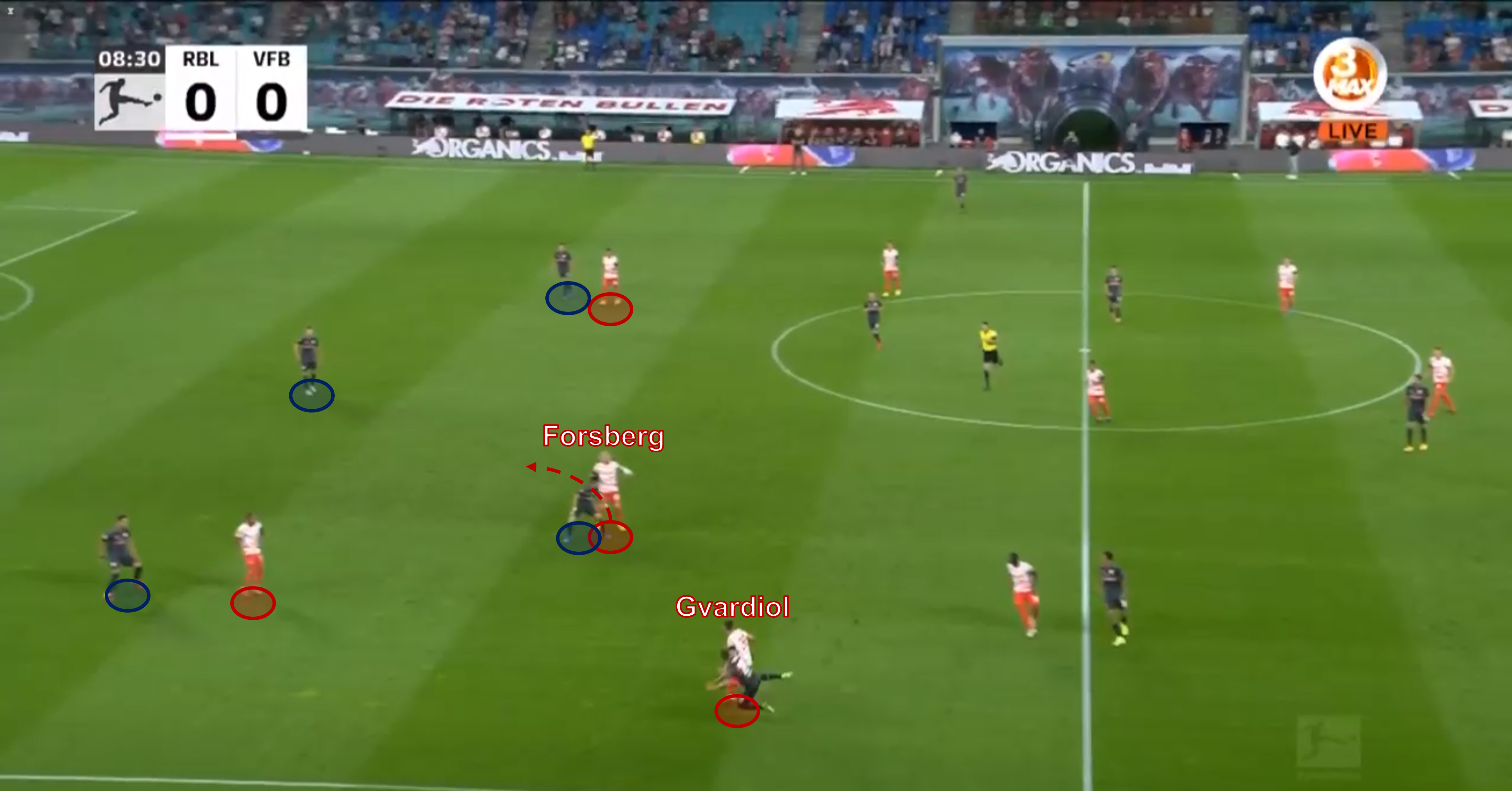 Here, we can see Gvardiol high and wide, winning the ball back with a high press. He has Forsberg to pass into midfield, who has plenty of support runners ahead.

Leipzig played with such a high intensity that Stuttgart simply could not match. Fitness levels looked very different between both sides, but this is more so a credit to Leipzig than a disservice to Stuttgart. They won the ball back high up the pitch in advantageous scenarios several times, such as the scenario above. In fact, with the high-quality chances they did generate, they were rather wasteful.

Leipzig’s attacking midfielders in this match did an extremely good job of positioning themselves in between the lines, and consistently receiving with a good first-touch, and looking forward to the plethora of passing options they would constantly have ahead. Forsberg was especially good at this in that #10 role – his movement was superb but as was his ability on the ball. He took four shots and created four key passes, on top of some direct and driven ball-carrying, he had an excellent game. 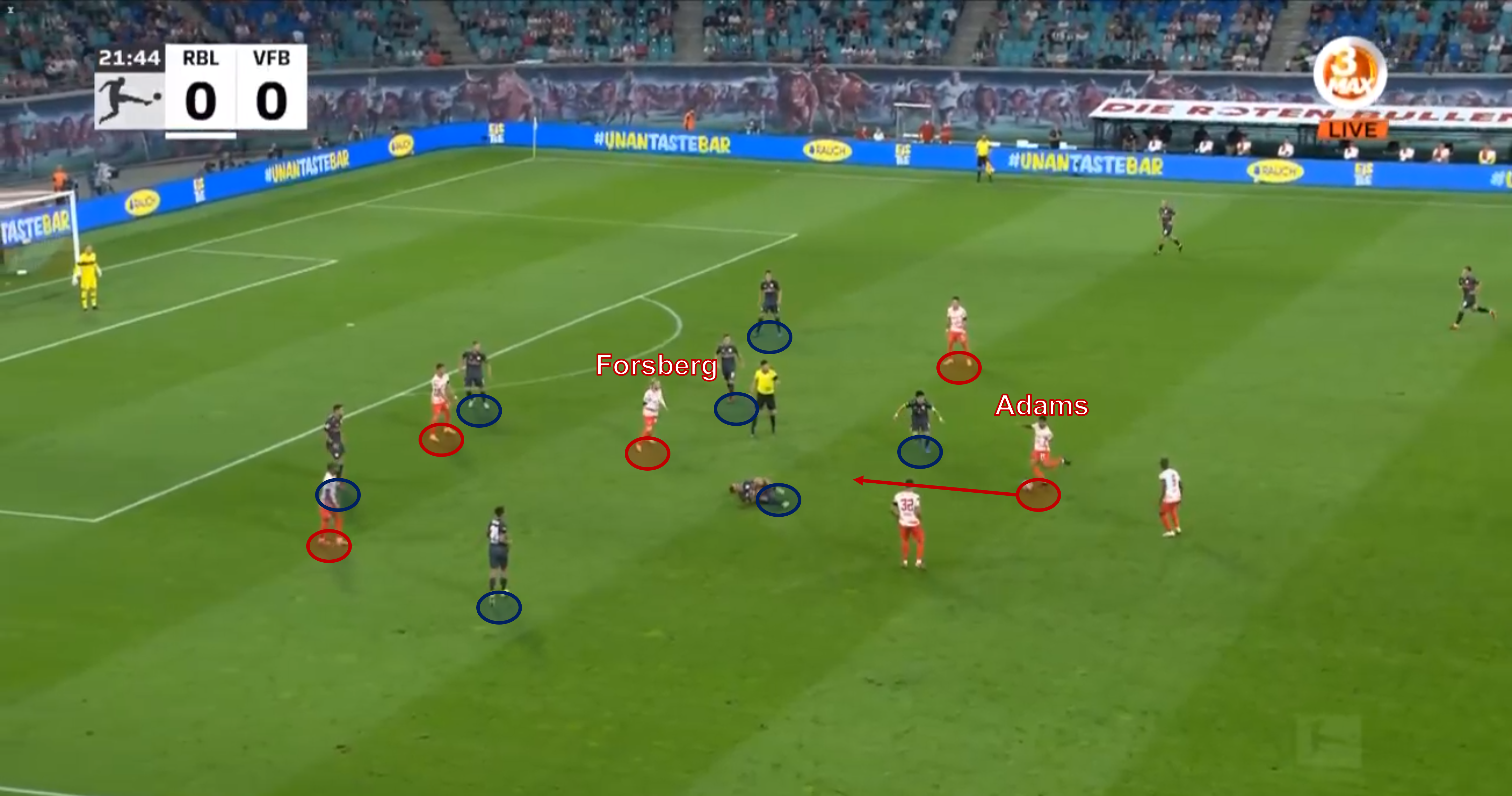 See Forsberg positioned in between the lines here after Leipzig retrieve possession high up the pitch. He can then lay off the ball to a teammate and the attack continues from there.

His movement off the ball was never more of an asset than in Leipzig’s third goal of the match, where they scored a lovely-to-watch team goal. Think of some prime Wenger-ball in your minds – it was magnificent to watch and promising to see so early on in Marsch’s reign. It was emblematic of everything that Leipzig were trying to achieve in this match – fluidity off the ball and some excellent decision making on it. 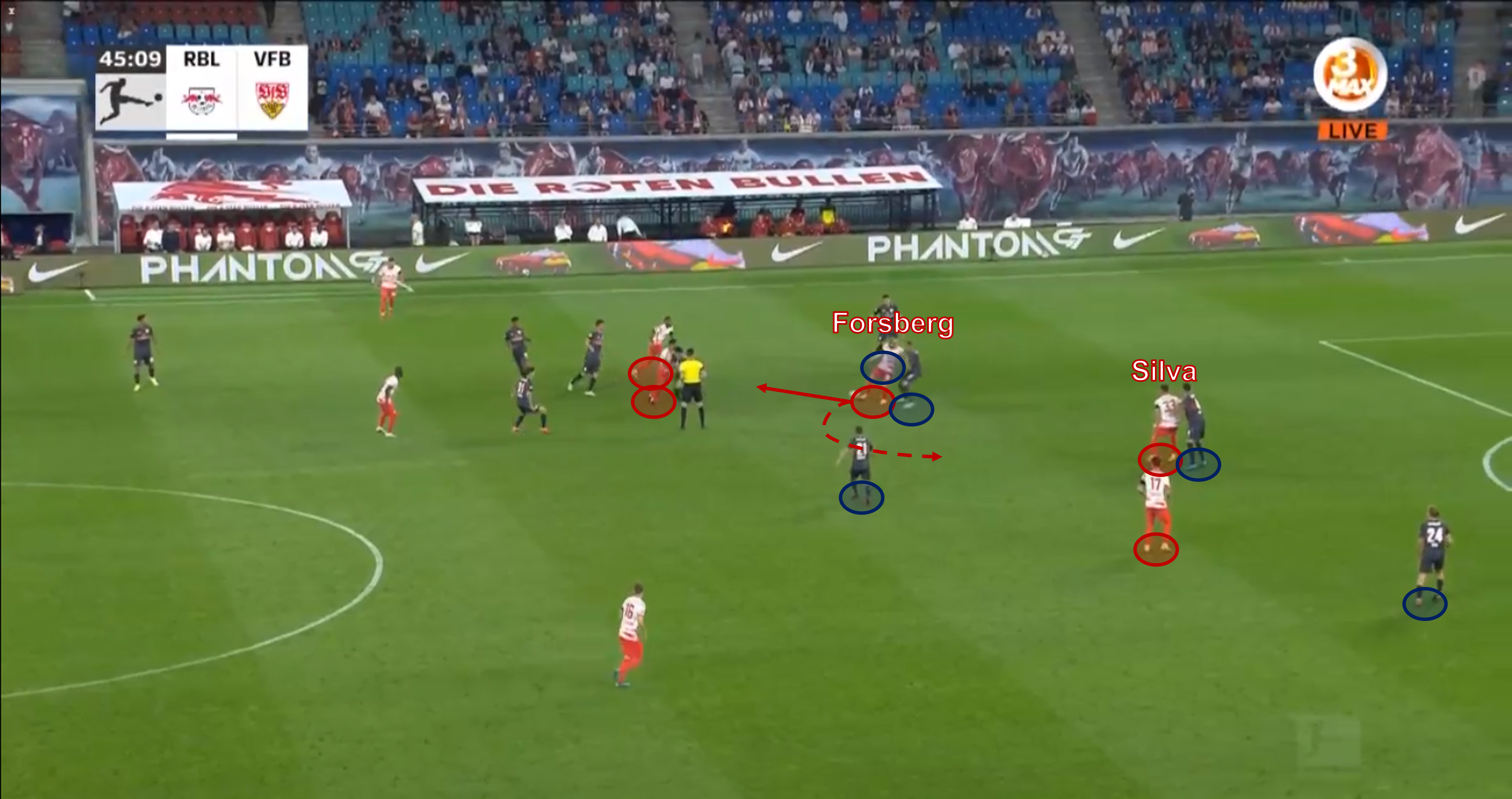 Forsberg here receives the ball and quickly passes it back to his teammate, before making the run inside, whilst Silva runs outside to drag the defender. 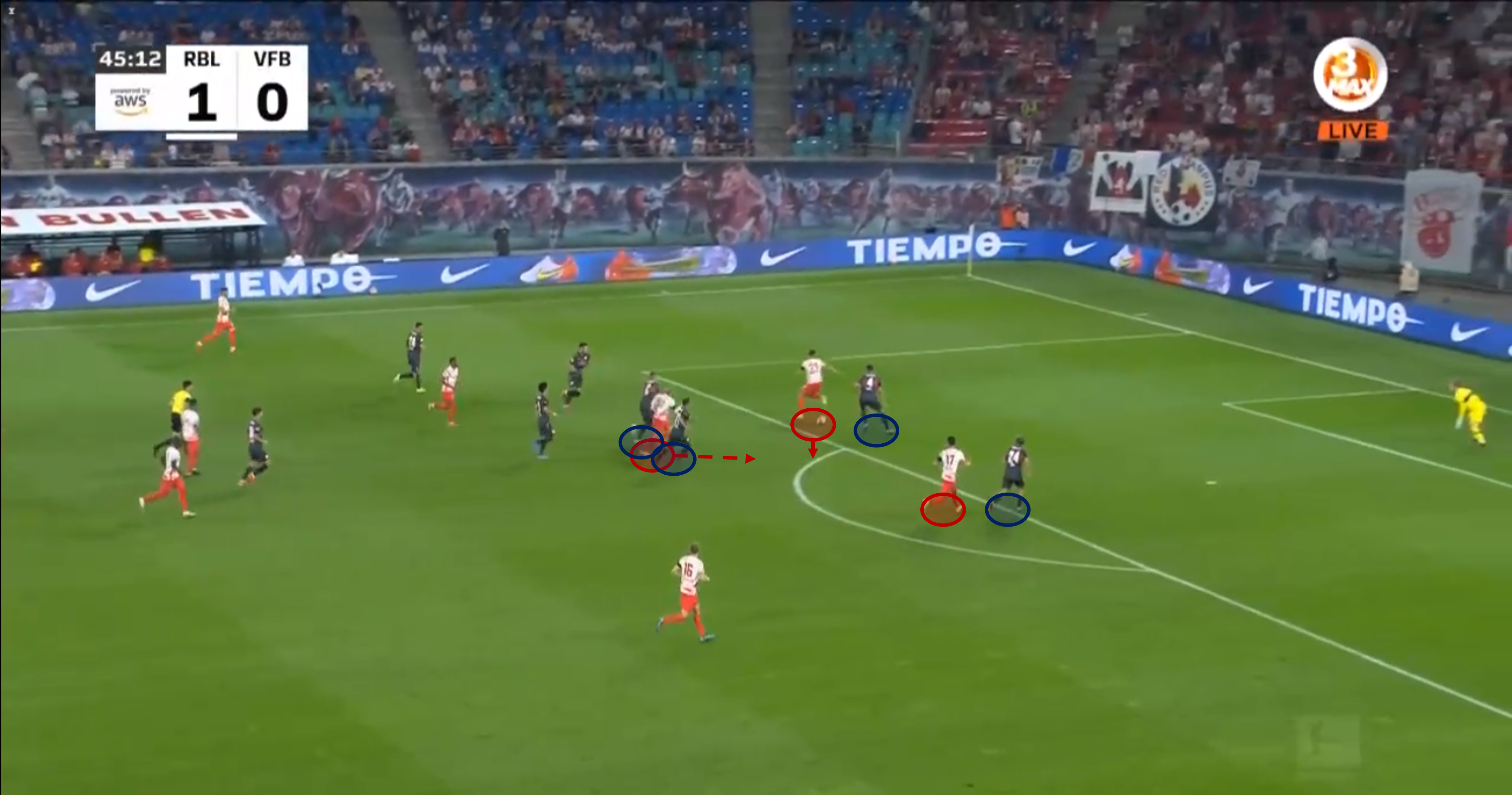 Silva flicks onto Forsberg into space, who carries the ball through the defence and calmly slots past the keeper in the end. Good team goal fashioned by fluidity and forward passing.

It was good to see so many positives on the attacking end after such a drab display in their first match against Mainz. While they only registered 0.85 xG in that match, they accumulated 3.53 xG in this one. The other goals came from two wonder strikes from a certain Hungarian wonderkid and a penalty, but they created high-quality chances throughout the ninety. Although they struggled in the transition, (as we will get onto next) their defensive performance was solid enough to win the match comfortably. Orban and Simakan are quickly developing a good relationship at the back, but there are still some problems as of now with their positioning. Thankfully Simakan has the recovery pace to get back.

Some positives and negatives for Pellegrino Matarazzo

While a 4-0 loss on the face of it is an embarrassing defeat, it can sometimes not truly resemble the performance of a team in any given match. That was not the case here, however. Stuttgart made several errors and generally allowed Leipzig too much space in the defensive third. Although, the game was not solely negative. They exploited Leipzig’s defensive issues on more than a few occasions here, and they arguably deserved at least one goal to their name – or so a 1.02 xG would suggest. 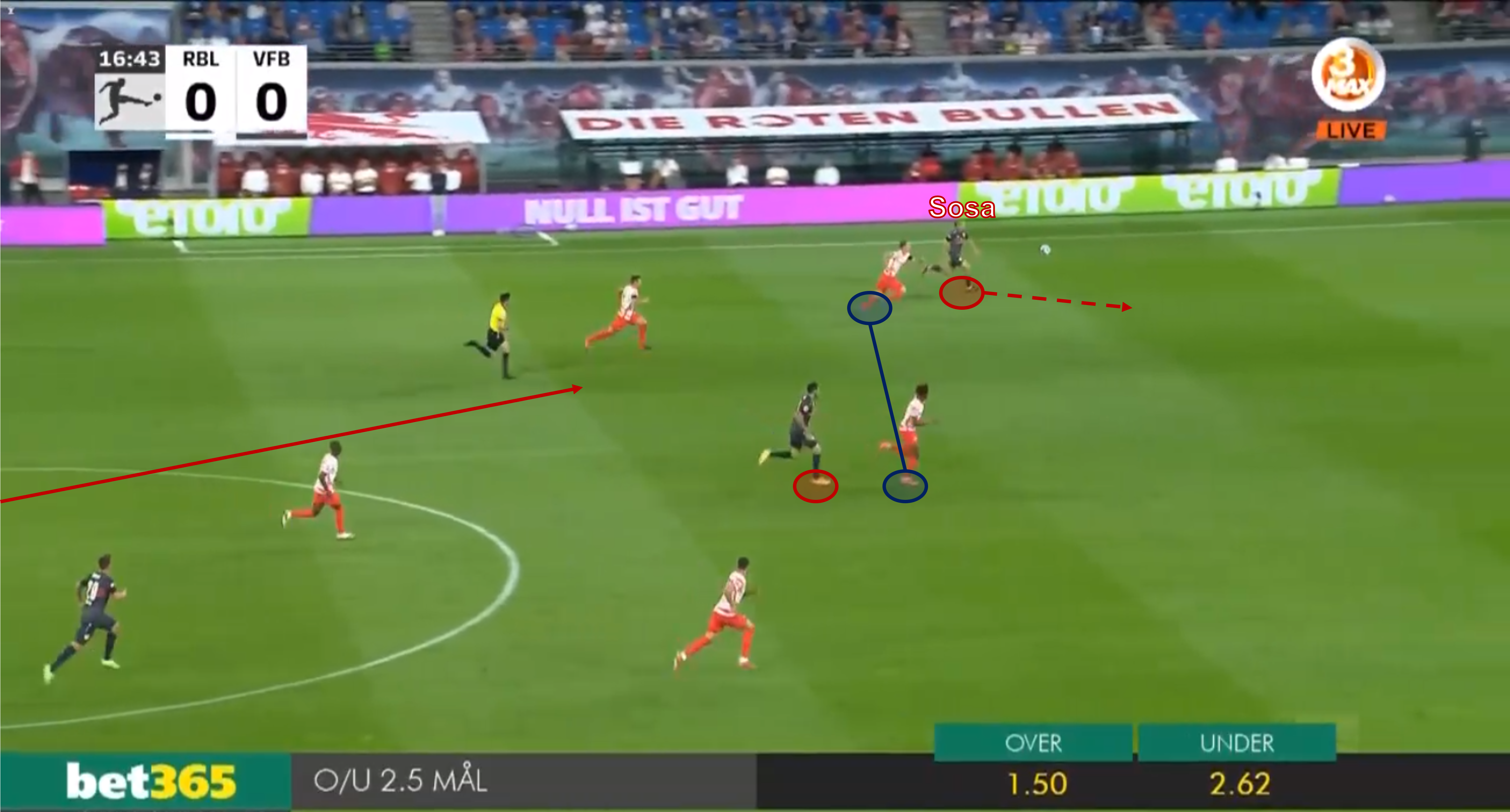 After a long pass in behind, Sosa’s run is behind is met, who continues his run with the ball at his feet, but unfortunately shoots way wide of the target.

They got in behind the high line of Leipzig on a handful of occasions throughout the ninety, but the final ball or finish would leave much to be desired – if Leipzig hadn’t recovered in time that was. Although Matarazzo chose a different formation, the style of play to Leipzig was not too dissimilar. Possession was split almost evenly (52%–48% in Leipzig’s favour), and Stuttgart, when they won back the ball, looked to play forward passes into their forward line. They just lacked quality in the final third to make it count.

This largely occurred down the wide zones, where a gap developed between the centre-back and the full-back as Marsch looked to occasionally match Stuttgart’s back three. As Gvardiol sometimes ventured forward, a gap appeared for the likes of Massimo to exploit, which he did on a couple of occasions. This, one time, led to a high-quality goal-scoring opportunity created in the first-half for Stuttgart, as shown below. 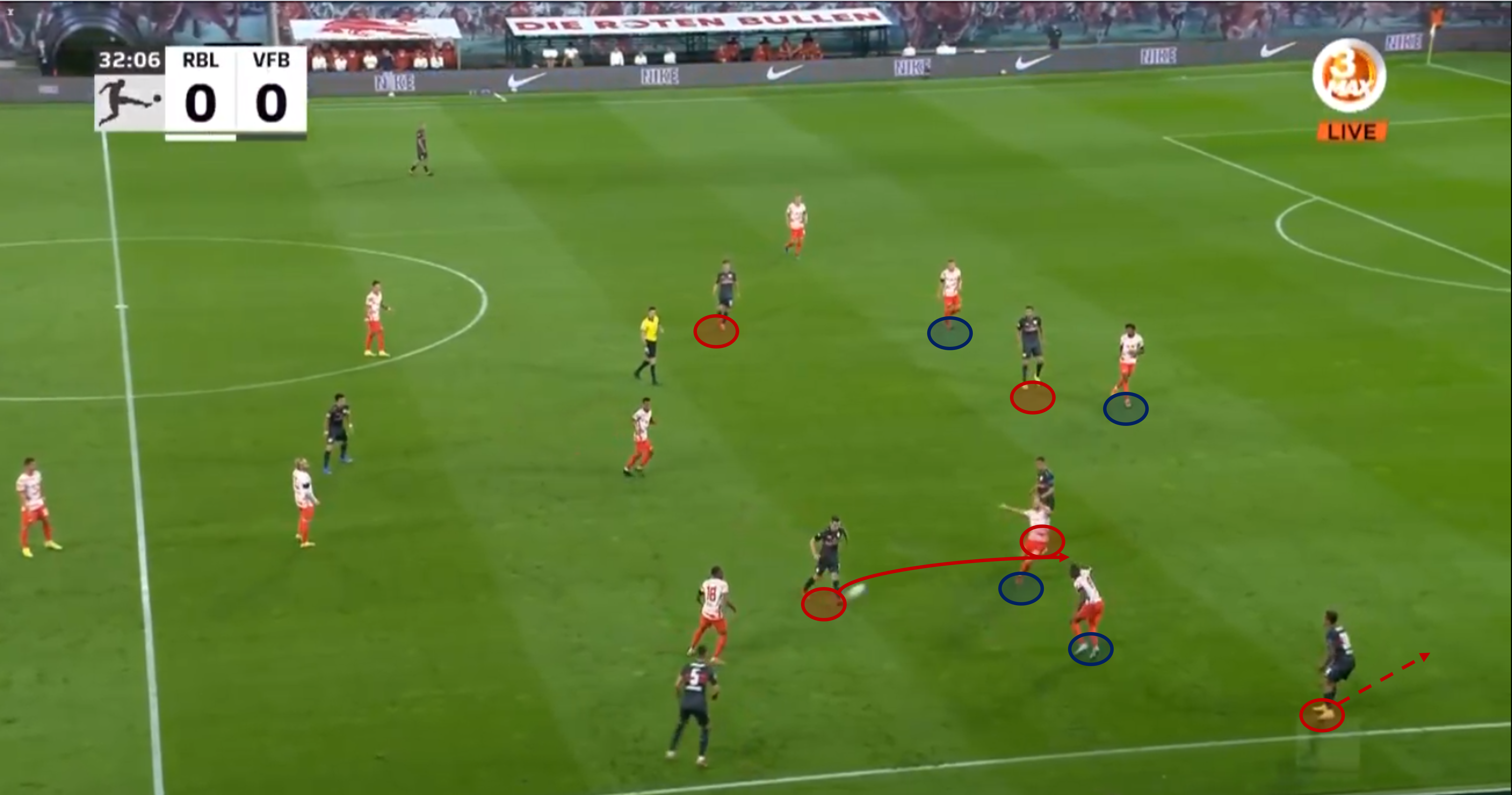 Klement here lobs the ball over a couple Leipzig defenders into the path of Massimo out wide. 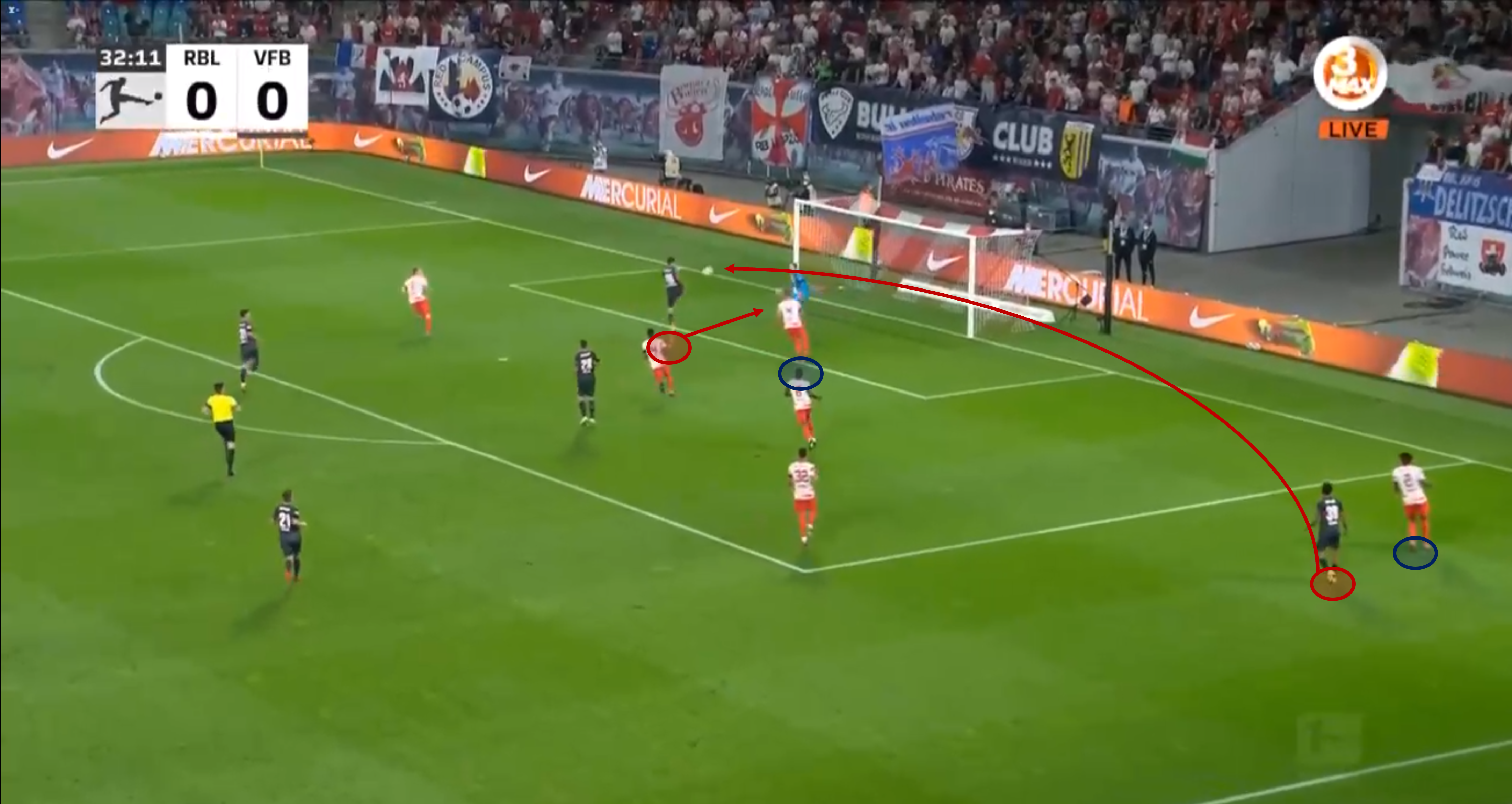 Massimo sent in a good delivery, but it is met with a weak finish.

As the game got into its latter stages, Stuttgart for the last ten minutes actually put Leipzig under a lot of pressure. They were attacking more and generating more opportunities on goal, but it was fruitless. They had paid for their lack of defensive positioning and errors on the ball which led to them leaking chances. Their passing was far from perfect, and they got punished by a prolific team on the night. 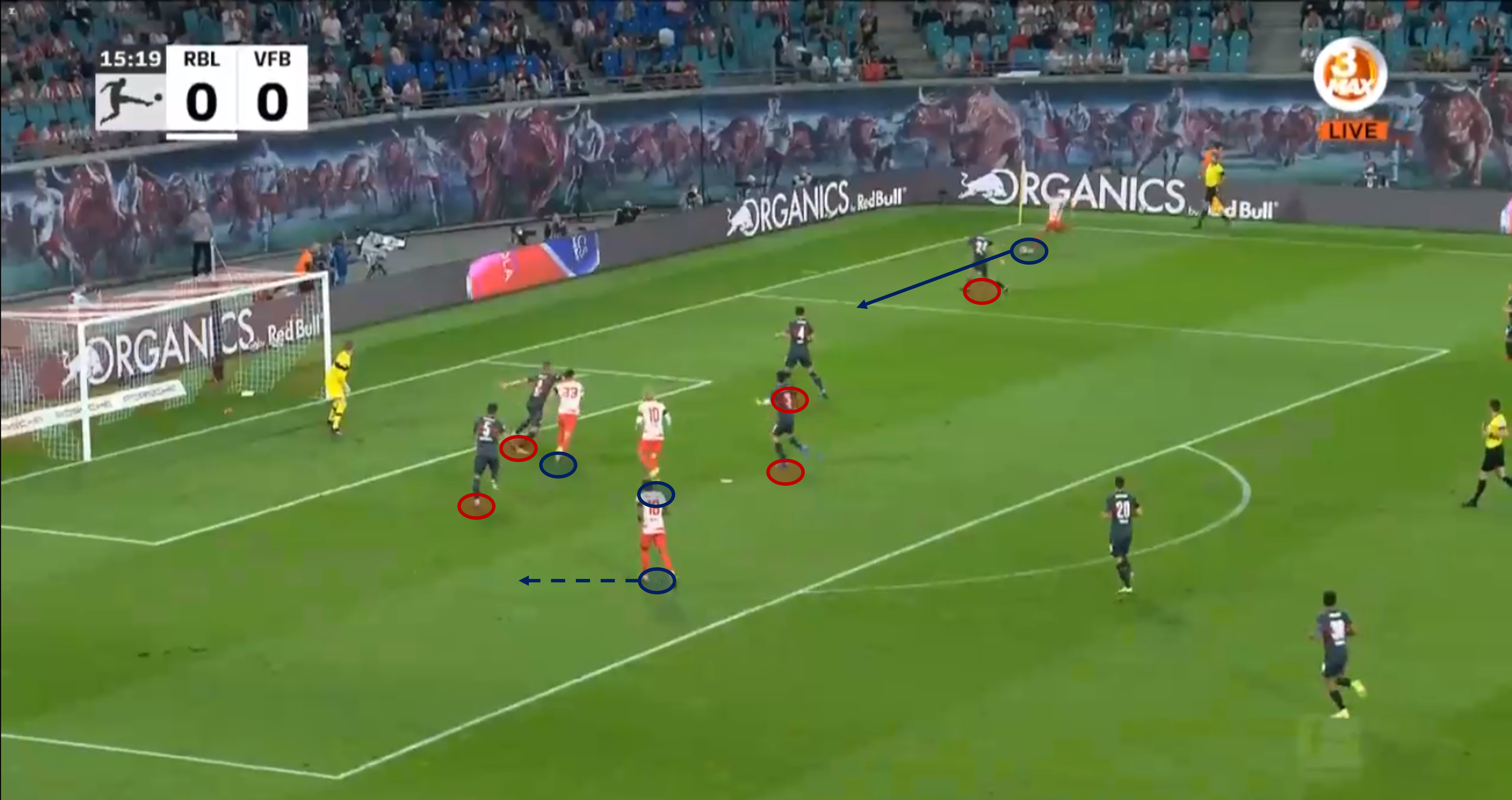 After a misplaced pass by Stuttgart, Szoboszlai whips in a cross towards Nkunku, who, despite several Stuttgart defenders in the box, has plenty of space to manoeuvre.

So it was a game that turned out some positives for Matarazzo, but overall it was not the performance he would’ve hoped for. Sloppy possession in the midfield resulted in some dangerous turnovers defensively, and their composure and decision making in the final third was not at the requisite level. They are still waiting for Sasa Kalajdzic to return to full fitness, as well as awaiting Silas’ return to professional football in September after his ban from competitive fixtures is over too.

Overall, an xG figure of 3.58-1.02 swung in Leipzig’s favour in this game, and that is a fair representation of how this game went. Leipzig tore Stuttgart apart at times defensively, thanks to their fluid movement and quick forward passing, but also owing to Stuttgart’s poor positioning off the ball. Both coaches, however, can leave these fixtures with areas to work on and positives to be pleased with.

This was truly the Bundesliga’s ‘hipster’ affair, with two clubs who are run expertly behind the scenes. In a sense, Stuttgart are a Leipzig-lite in the way which they recruit in relatively unknown leagues. However, in this affair, Leipzig’s attacking quality shined through.