On 3 October, Reading Women sat bottom of the WSL, having just suffered their fourth league defeat in a row, whilst their goal difference read a worrying -10. However, something clicked for them at that point, with their next five games ending in four wins and a draw, allowing them to climb away from danger and improve their goal difference to a much more respectable -1.

The question is what changed, and the answer is that their new additions, who had understandably taken time to find their feet, had started to give the team more quality around the pitch. One player who has made a significant contribution to this upturn in form is Deanne Rose, who joined from Florida Gators (who represent the University of Florida in college football) after helping Canada win the Olympic gold medal in Tokyo. Capable of operating as a midfielder or a forward, Rose has slotted into the role of playmaker in Reading’s attack, getting into good spaces and creating options for teammates, and this tactical analysis will look at the 22-year-old’s game in more detail.

One of Deanne Rose’s major strengths is locating key spaces around the pitch, which has helped Reading Women to carry more of a threat in the final third. This happens both when Rose is the furthest player forwards and when she drops back to work with teammates, and it has been evident that the team have noticed this and looked to build their attacks around her as a result.

In the first part of the season, Rose was often left alone outside the goal area and closed down easily by opposing defenders, which meant that she was unable to exert much of an influence on games. However, Reading slightly changed her role after this, getting her into the forward line and tasking her with causing problems for the opposing defenders, which has led to them staying further back and leaving Reading more space to advance into in the final third.

This situation shows how far back Birmingham City Women have retreated, as a result of Rose playing in this more attacking role. However, whilst it appears that Birmingham have successfully surrounded her, Rose’s key quality at the Olympics was to make sharp movements and try to force defenders out of position, opening up routes to goal, and this is what she does here too. As a result, when right-back Faye Bryson puts the cross in here, Rose is able to receive the ball in space, so this is one way that the Canadian’s key qualities have helped Reading to be a much better attacking side.

When the ball is further back, Rose is also capable of dropping into holes between opposing lines, giving her teammates a way of keeping the ball moving forward when in tight spaces. She has been doing this since the beginning of the season, but the difference now is that Reading didn’t originally give her enough support, which is why she was often closed down. This image demonstrates the improvement they have made in this, with two players running outside and ahead of Rose to stop Chelsea Women from closing her down, giving the Canadian time to turn and play a one-two with forward Emma Harries, which leads directly to the only goal of the game. Therefore, again, small tactical changes with Rose’s role in Reading’s offensive play have given the team a better attacking setup, and they have become harder to keep out as a result.

For Rose to be as effective in Reading’s tactics as possible, she needs to be given a free role, allowing her to get into the half-spaces and provide a link between different areas of the team, which is what she is doing here. In this case, it is Everton Women who have a problem, as Rose is ready to receive the ball here and pass it immediately into another teammate, looking to build an attack for her side, and her passing accuracy of 71.9% shows how this is something she has done well this season. Kelly Chambers’ players have looked more creative in the final third of late, and Rose’s presence will be essential to that continuing.

However, whilst Deanne Rose’s ability to find spaces has made Reading Women a better attacking side, the main way that she has improved them is through her increased ability to give them options in attack, leading to them showing more creativity with the ball.

In this image, Reading are looking to find a way through the Brighton and Hove Albion Women defence, but have been initially closed down well by the defenders. However, the key to good attacking play is to make the pitch as big as possible, whilst also forcing the defenders to decide between committing to tackling a player or staying back and lessening the risk of a gap opening up in the defensive line. Rose is the one who has positioned herself in a way that asks that question, and, given that Reading have some very quick players in the team, such as captain and Wales winger Natasha Harding, making the right choice is important. Without Rose getting into this space, Brighton would be able to end the attack with relative ease, so this again shows how Rose has helped her team to be more threatening in attack.

In the last example, Brighton opted to stay back and not close Rose down, but this image illustrates what happens when the defender, in this case Everton’s Danielle Turner, opts to do the opposite and get tight to her. The Canadian may not now be able to play a direct role in the attack, but she has taken Turner out of the game and opened up a gap between her and the other Everton players, allowing Reading to make a pass through and get behind the defensive line, and that is the key here. Whether she is directly or indirectly involved in their attacks, there is no doubting that Reading have looked much more threatening ever since Rose has been able to position herself in these spaces, with defenders finding it harder to contain them.

It is not only Rose’s positioning that has given Reading more attacking options, as her link-up play with Natasha Dowie has also led to the team having an increased presence in the goal area. The former Liverpool Women striker left AC Milan Femmenile over the summer to fill the hole left by Danielle Carter’s move to Brighton, but struggled to make much of an impact in the opening games due to a lack of support from her teammates; the same problem that Rose had.

Therefore, one way for Reading to improve their performances was to find a way that both players could operate together, and the solution was to obtain a better midfield balance, which would prevent Rose from needing to drop back on so many occasions. As a result, situations like this started to become more frequent, with Dowie and Rose both in a position to meet the cross from Norway forward Amalie Eikeland, with Rose eventually scoring her first of two goals in this match. Therefore, making small alterations to the team’s overall structure is yet another reason for Reading scoring more goals and winning more games.

Areas to work on

However, whilst there have been plenty of positives highlighted in this scout report, there are also still a few areas that both Deanne Rose and Reading Women need to work on as the season progresses.

Firstly, crossing has been a general issue for Reading, both before and after their upturn in form. Here, Rose is looking to pull the ball back into the Bristol City Women box, but the ball ends up going between her teammates. Whether it is a case of the central players being more alive to these chances, or Rose needing to have more accuracy with her passes, this is something that Reading as a team need to look at and work on, because they will waste opportunities if they don’t. Rose has only contributed three assists for her team this season, and has a crossing accuracy of 52.9%, and both of these could be increased with more composure and precision when in these situations.

Another issue is that Rose can make the wrong decision with the ball at times, and this image is a prime example of that problem. We can see how she has taken the ball to the edge of the Birmingham box here, with Wales left-back Lily Woodham ready and available in space to receive the ball and shoot at goal. However, instead of making the pass to Woodham, Rose instead takes the shot herself, which misses the target. Whilst it ultimately didn’t matter in this game, there will be tougher opponents where opportunities like this will be rarer and need to be converted, and Rose needs to sometimes keep her head up and look around her a little more, ensuring that Reading are as productive as possible in the final third.

In conclusion, this tactical analysis has demonstrated the different ways in which Deanne Rose has helped Reading Women to recover from a slow start and climb the WSL table. As with all teams, it took time for the new players to become used to Reading’s tactics and style of play, but they are now showing more confidence which will only be boosted by the January arrival of 33-year-old Denmark midfielder Sanne Troelsgaard, with her signing confirmed this week by the club.

This analysis has though specifically focused on Rose, arguing that she is the one who has had the biggest impact on Reading’s improved form and showing how her ability to find spaces and create options has been essential in Reading creating goalscoring chances. Despite still being at the start of her career, she is highly regarded as one of the top prospects in Canadian women’s football, and it has not been hard to see why that is the case. 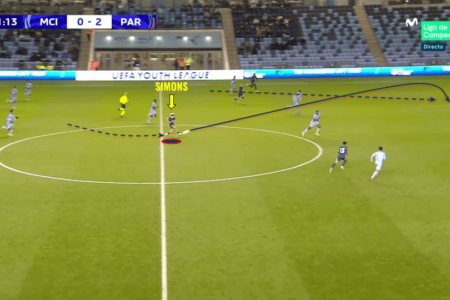 Xavi Simons (2003, Amsterdam) has been one of the best-known underage players for a long time now. His football quality, […]