Tottenham Hotspur Women were sitting in eighth place in the WSL a year ago, having only taken one point from their opening two games. Fast forward to now, and they are the top flight’s joint-leaders, alongside local rivals Arsenal Women, and their improvement between then and now has been remarkable. They have been playing good football this season, posing a threat in attack and looking secure defensively, and all with a squad that contains few star names, with Canada defender Shelina Zadorsky (their captain) and Australia striker Kyah Simon potentially the most well-known internationally.

Their meeting with struggling Reading Women at the weekend gave them an opportunity to maintain their winning start to the season, but it turned out initially to be a game of low quality and few clear-cut chances. However, Tottenham have a “never-say-die” attitude under Rehanne Skinner, and this tactical analysis will demonstrate how some tactical tweaks helped them to edge past their Berkshire-based opponents. The analysis will also highlight Reading’s current problems, and where they need to improve in order to get their season going. 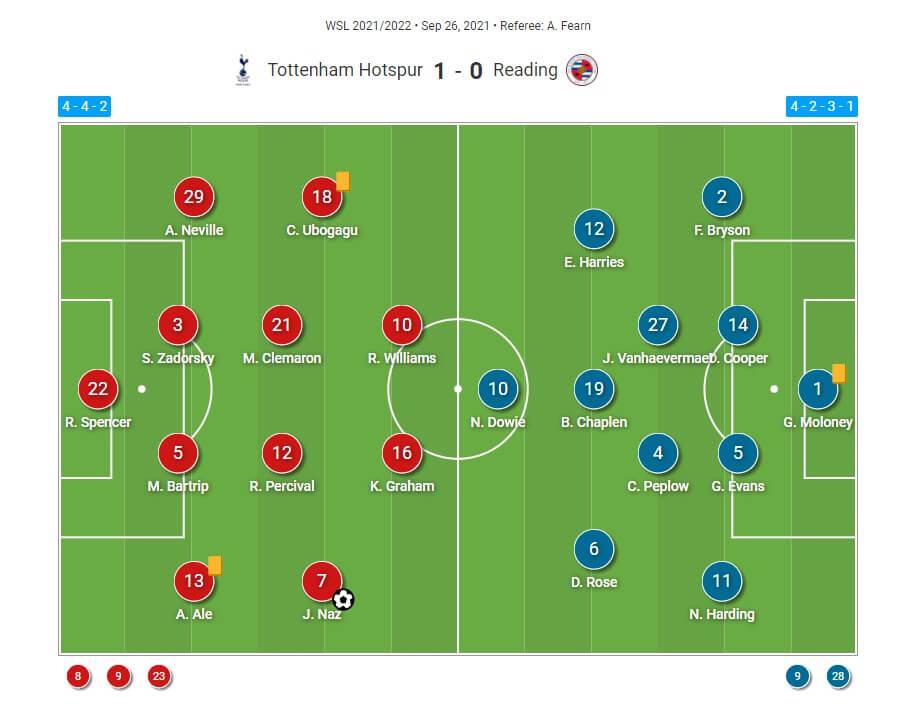 Reading Women opted to play in a 4-2-3-1 formation for this game, having used a 4-3-3 in the loss at Arsenal Women. Goalkeeper Rhiannon Stewart, Wales left-back Lily Woodham and Norway forward Amalie Eikeland all moved to the bench, whilst another Wales international, Rachel Rowe, was left out altogether. Republic of Ireland international Grace Moloney made a welcome return between the posts, captain Natasha Harding moved to left-back, and Belgium midfielder Justine Vanhaevermaet, Canada forward Deanne Rose and ex-Liverpool Women and AC Milan Femminile striker Natasha Dowie all started for the first time, following their summer arrivals.

Tottenham Hotspur Women have looked more dangerous this season, which comes down to Rehanne Skinner’s attacking style of play, and their 100% winning record is a testament to her work on the training ground implementing it into the squad.

Under former joint-managers Karen Hills and Juan Amoros, now in charge of Charlton Athletic Women and Real Betis Feminas respectively, Tottenham usually played with just one striker and had an overall defence-focused style of play. Rehanne Skinner changed this to two strikers, occasionally three, after her appointment last November, and this has been the main reason for them asking more questions of opposing defenders and challenging higher up the table.

Their main focus tactically is dominating the central areas, which forces their opponents to use the wings to advance forwards. Manchester City had problems with this in the last round of matches, as they prefer to play through the thirds. Even though Reading Women attack in a different way, Tottenham used the same tactics against them, as they wanted their opponents to cross the ball into the middle from the wide channels, as it is easier to defend against than a central attack, with their aerial dominance key in this. Therefore, the narrow 4-4-2 structure they have set up in under Rehanne Skinner is one key reason why they have won all three of their league games so far.

Another reason is that they work together well in the forward areas. Reading are trying to play forwards here, but the player in possession, in the red circle, is being closed down. However, if it was only the single attacker moving forwards, then the space between the forward and midfield lines would have been opened up, allowing Reading to pass around the press, and Deanne Rose is already looking to move into that space to offer the passing option for her teammate. In order to prevent this, Tottenham’s midfielders also push forwards, meaning that there are three players closing the ball down. As a result, Reading either have to play a risky long ball forwards, which Tottenham would likely clear, or pass backwards, and they choose the latter here.

The key thing to note here is how Tottenham manipulate their opponents, often in the subtlest ways, ensuring they have control of the game even when it doesn’t look like they do, and this is something else that Skinner has introduced since joining the club.

We have mentioned how Tottenham like to control their own airspace, but this proved particularly important against Reading, with former Aston Villa Women right-back Asmita Ale clearing the ball here before Natasha Harding can control it behind the defensive line. Harding is one of the quickest players in the league, and Reading pose a threat every time she gets up the field, so preventing her from getting into the space behind was crucial to Tottenham staying in a tight first half. This is not something that we have seen against all of their opponents this season, but it did show how they had identified beforehand which players would cause the most problems, so their excellent pre-match preparation is again highlighted.

However, for all their good play, the score was goalless at halftime, with neither side creating many clear-cut opportunities. Skinner, therefore, made tactical tweaks for the second half, trying to give her team a creative edge.

Tottenham had been shooting from reasonable distances in the first half, due to limited numbers in attack, but it hadn’t led to anything for them. However, Skinner prefers her team to have numbers in the final third, and this was the case in the second half against Reading Women, with Tottenham playing shorter passes through the gaps in their defence. This helped them to create more opportunities in the final third and shoot at goal from better areas, and they were undoubtedly the better team in the second half for that reason. This may be a basic point, but football is all about small details, and this was one that helped Tottenham go from a team that created little to a team that posed a genuine goalscoring threat.

The reason that they could create more opportunities and get more players forward was because their two-player forward line setup was altered, with Kit Graham dropping back to play between the midfielders and striker in the second half, whilst ex-Birmingham City Women striker Rachel Williams stayed higher up the field. This gave Tottenham a link between the two sections of the team, again helping them to play shorter passes with increased accuracy.

One player who really benefitted from this change was winger Jessica Naz, who had been relatively quiet in the first half, but was given more freedom to run inside from the wing after the break. This image shows her late winner for Tottenham, with her run behind the Reading defence allowing her to convert the through ball from China striker Tang Jiali, who is on loan at the club from Shanghai Shengli. Therefore, this was another key change that helped Tottenham get the better of their opponents and win the game.

It wasn’t only in attack where positive changes were made though. In defence, they were more assured in possession, even when being pressed by Reading. Here, three attackers are closing the ball down, but Tottenham’s wide setup gave them a way of playing the ball between the defenders and out of danger, with one-touch passes making it hard for Reading to get close to the ball and attempt an interception. In the first half, they were more frantic at the back, with Reading having a couple of half-chances in Tottenham’s third. However, a more robust defence is something else that Skinner has introduced, and it has been another key feature of their play so far this season.

Reading Women have yet to score a point or goal this season, and their performance in this game highlighted a few reasons why that has been the case. It has mainly been down to individual mistakes and tactical errors, and the positive is that these can be addressed very easily.

Having Natasha Harding as an attacking left-back effectively gave Reading two attackers on the left side of the pitch, and therefore an increased threat. In theory, Harding’s ability to move up and down the wing allowed Deanne Rose to operate in a role inside the pitch, holding up play and bringing teammates into the game. Normally, this would mean turning and making passes behind the defence when she received the ball, but Tottenham were alive to this, and we have already mentioned how their defence has improved since Rehanne Skinner came in. In this image, they have got tight to Rose and prevented her from playing forwards, so the Canadian’s only option now is to pass backwards, therefore ending the attack.

As a result of this, Reading’s players didn’t advance forwards as much as needed, leaving striker Natasha Dowie increasingly isolated as the game went on, due to the lack of support around her (which was in contrast to Tottenham’s aforementioned final third numerical increase after half-time). Therefore, this was a key reason for the visitors’ lack of goalscoring opportunities and a big difference between their play and their hosts’.

Another major problem was a lack of accuracy when crossing the ball into the box. Here, Brooke Chaplen is outside the box, with two players in the middle to transfer the ball to. However, her cross goes into the space between the two attackers, allowing Tottenham to clear the danger. Against a defence as commanding and well-organised as Tottenham’s, Reading needed to make these chances count, and the fact that they only had one shot on target in this game (out of seven opportunities), compared to eight out of 22 for the home side, came from individual mistakes in situations like this, so better accuracy in the final third is something else they need to work on.

Reading’s general passing was also loose at times, with Tottenham allowed to reclaim the ball too easily at times. Justine Vanhaevermaet has possession here, but the pass from the former LSK Kvinner player is hit too softly, as the red arrow shows, with the two Tottenham players in front of her reclaiming the ball and launching an attack from the middle of the field. Therefore, again, better accuracy is required in these situations, because this pass was not made under much opposing pressure, and attack-minded teams like Chelsea Women thrive on misplaced balls.

In conclusion, this tactical analysis has looked in detail at Tottenham Hotspur Women’s preferred style of play, and the reasons why they have ascended to the top of the table. Whilst they didn’t create many opportunities in the first half, their ability to make changes is what has made them tough to beat, and they have won games that they might have lost or drawn last season, which is the key point. Reading Women, on the other hand, have work to do, and manager Kelly Chambers called for her players to stand up and be counted after the Tottenham game. They need a big result in their next match, otherwise they risk being in a relegation battle for the rest of the season.

Tottenham’s next game is on Wednesday night, when they travel to North London rivals Arsenal in the FA Cup fourth round, before visiting struggling Leicester City Women in the league on Sunday. Reading’s next game is against Everton, who picked up their first win of the season against another relegation-threatened side, Birmingham, at the weekend.

As is tradition, the first round of the DFB Pokal opened the season for teams in the Bundesliga, and although […]