Freiburg have lost four of their past five league games in the Bundesliga, and yet still manage to find themselves sitting in fifth-place in the table.

After close losses to Bayern Munich and Frankfurt, they would have been shocked to have lost to Bochum. They had a reaction the following week, beating Borussia Monchengladbach 6-0 away from home, before then falling short to Hoffenheim this previous weekend, allowing their opponents to leapfrog them in the table. In fact, no team has worse form over the previous five league games, with only last place Greuther Furth having the same amount of points from this set of fixtures.

Nevertheless, Freiburg are still in a great position in the league, and one of their leading lights this season has been the outstanding play of left-winger Vincenzo Grifo. The winger has been perennially undervalued throughout his career and has hopped around the German leagues, playing for KSC, Hoffenheim (twice), Dynamo Dresden and FSV Frankfurt on loan, Borussia Monchengladbach, and two spells at Freiburg, where he currently resides. Grifo is only 28 and with his contract expiring at the end of the 2022/23 season, teams may well be keeping an eye on his performance this season with keen interest.

This tactical analysis and scout report provides an analysis on the winger whilst giving an overview of the tactics he employs to be a regular creator and goalscoring threat.

Grifo predominantly operates as a left-winger or as part of a front three on that left-side but has also spent time as either a 10 or a centre-forward this season. His heat map shows the variety of his movement. Firstly we can note Grifo’s penchant for dropping well inside his half to get on the ball. There is a high number of action out wide, and Grifo penetrates the space to the side of the box with some regularity, whilst there is a healthy amount of action further inside in the half-space too. Interestingly, despite his 1.93 shots per 90 average in all competitions this season, and his four goals on top of that, there is little regular action coming inside the opposition area. 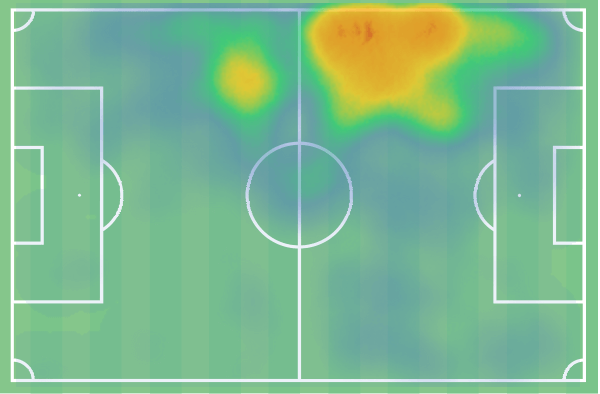 Grifo’s shots predominantly come from outside the area as you may expect from the previously shown heap map. He isn’t overly accurate from long range but nevertheless has scored twice from well outside the 18-yard box. He is more accurate, understandably so, inside the area but hasn’t scored from open play in this area 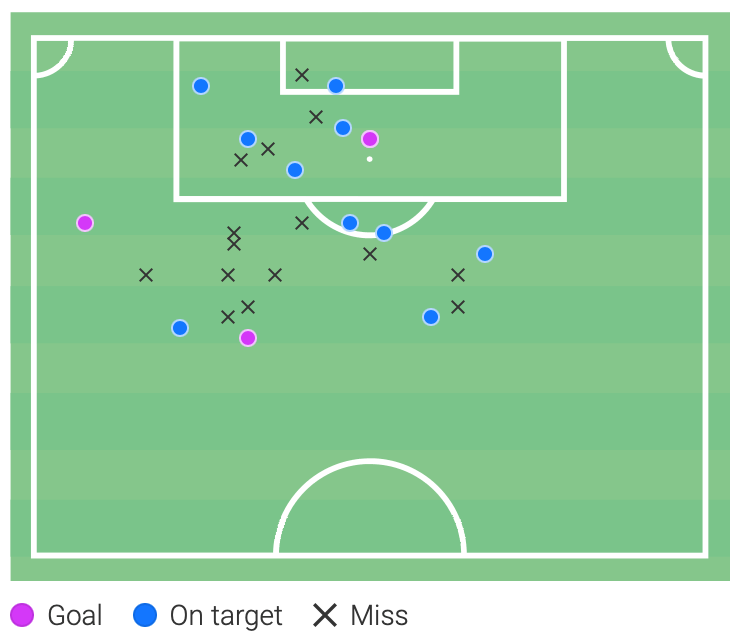 Three of Grifo’s four assists have come from dead-ball situations as have three of his four goals. As a result, it only makes sense to look at what Grifo is doing from set pieces that have been so effective.

Remarkably, and admittedly bumped up by the xG of his two penalties, he currently lies in third in the league for expected goals and assists, behind only Robert Lewandowski and Erling Haaland. 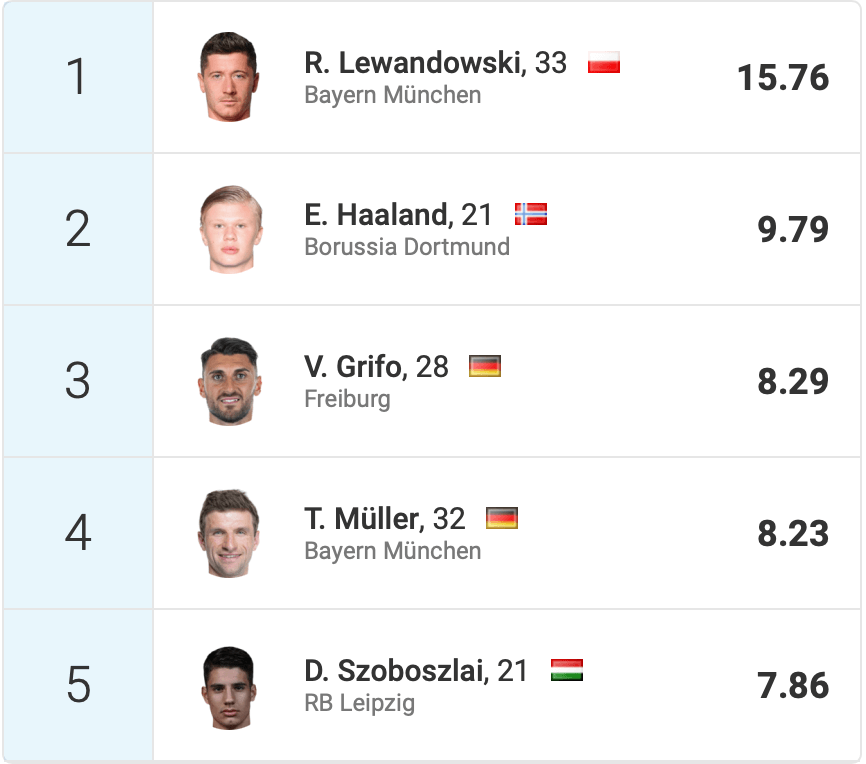 Grifo is a highly technical player and he is a regularly accurate crosser. Even from the set pieces that don’t result in goals, Grifo regularly creates chances from indirect free-kicks.

He is particularly dangerous when looking to whip the ball at a low trajectory across goal from a wide free-kick position. 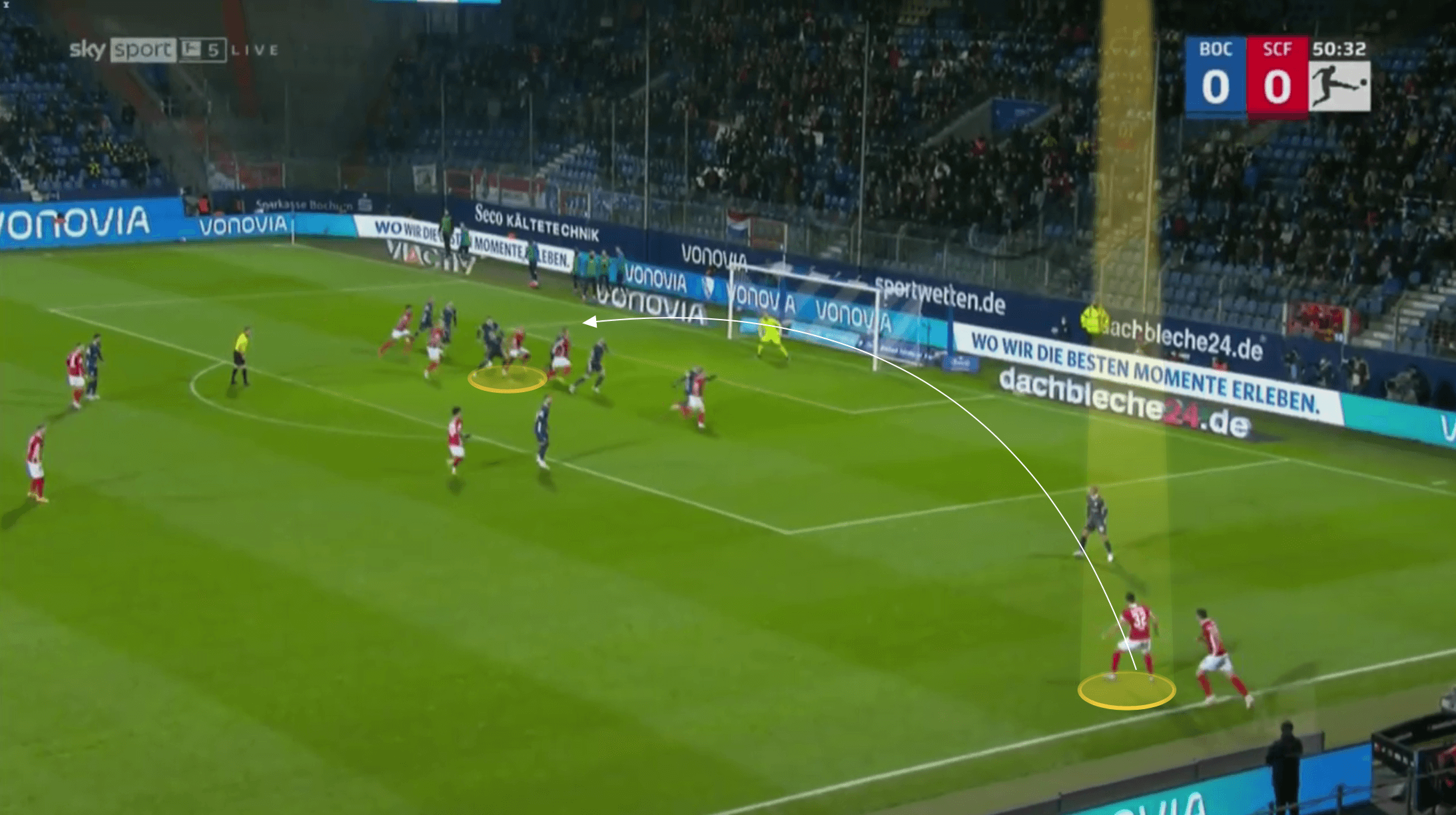 The image shown above and then the following one below come from two separate games, but the free-kicks are almost identical in terms of the chance created. Grifo is able to angle the ball away from goal but still hit the space in between the opposition goalkeeper and the defence, aiming for the second six-yard box aerially in a central to the back-post area. 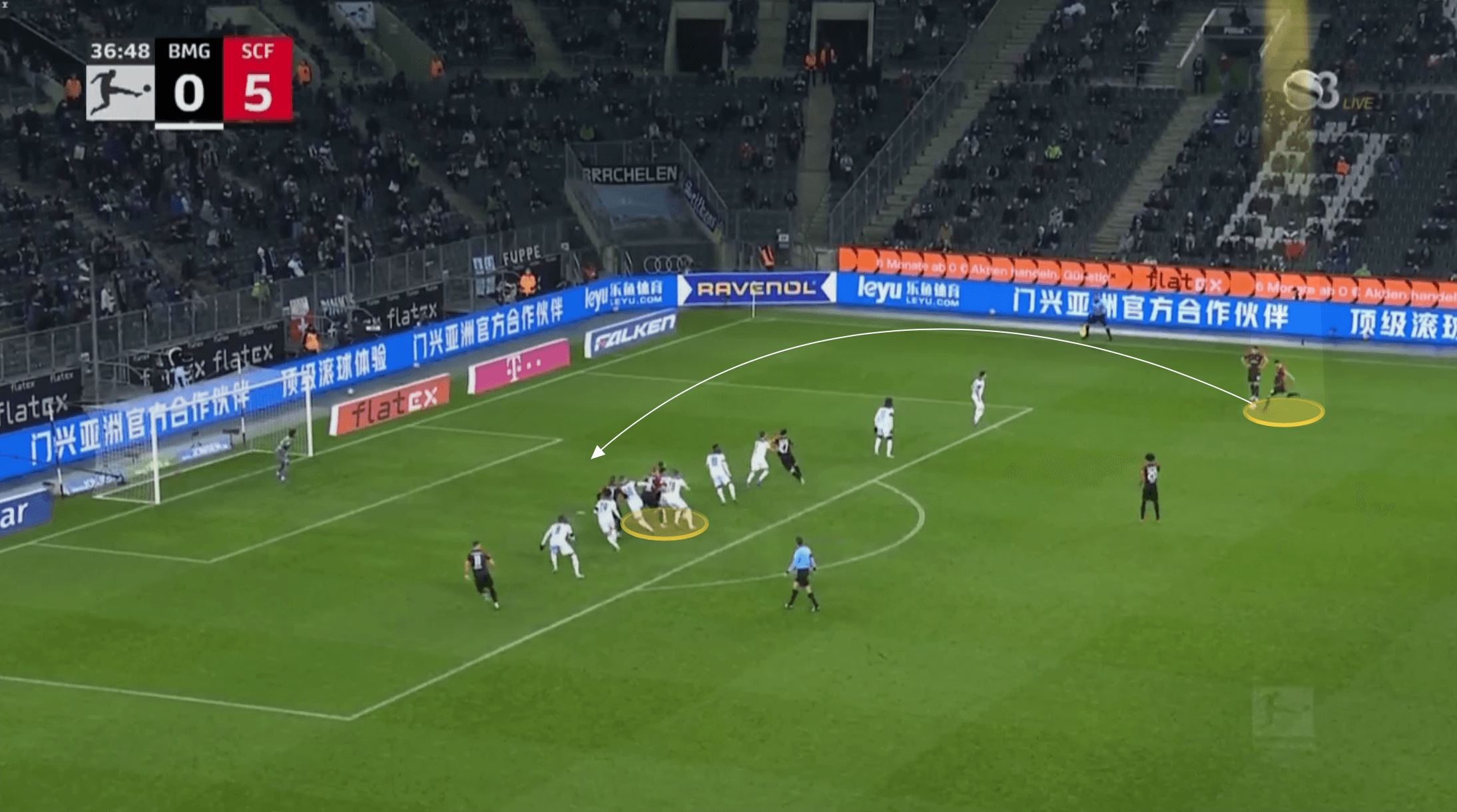 However, Grifo mixes up his approach and yet still shows outstanding technique and accuracy regardless of his approach to crossing the ball. Positioned closer to the centre of the pitch but in an area where he can’t really shoot from, Grifo has a penchant for aiming to deftly loft the ball into the area, getting an unusual amount of height on it. You can make out the technique he hits the ball with, using little follow through and curving the ball away from goal once more. He uses the height to give his attackers time to arrive to the flight of the ball, but the orientation of the ball and the distance from the keeper, showing pinpoint accuracy to not play it too close to them, creates high percentage chances within a close distance to goal. 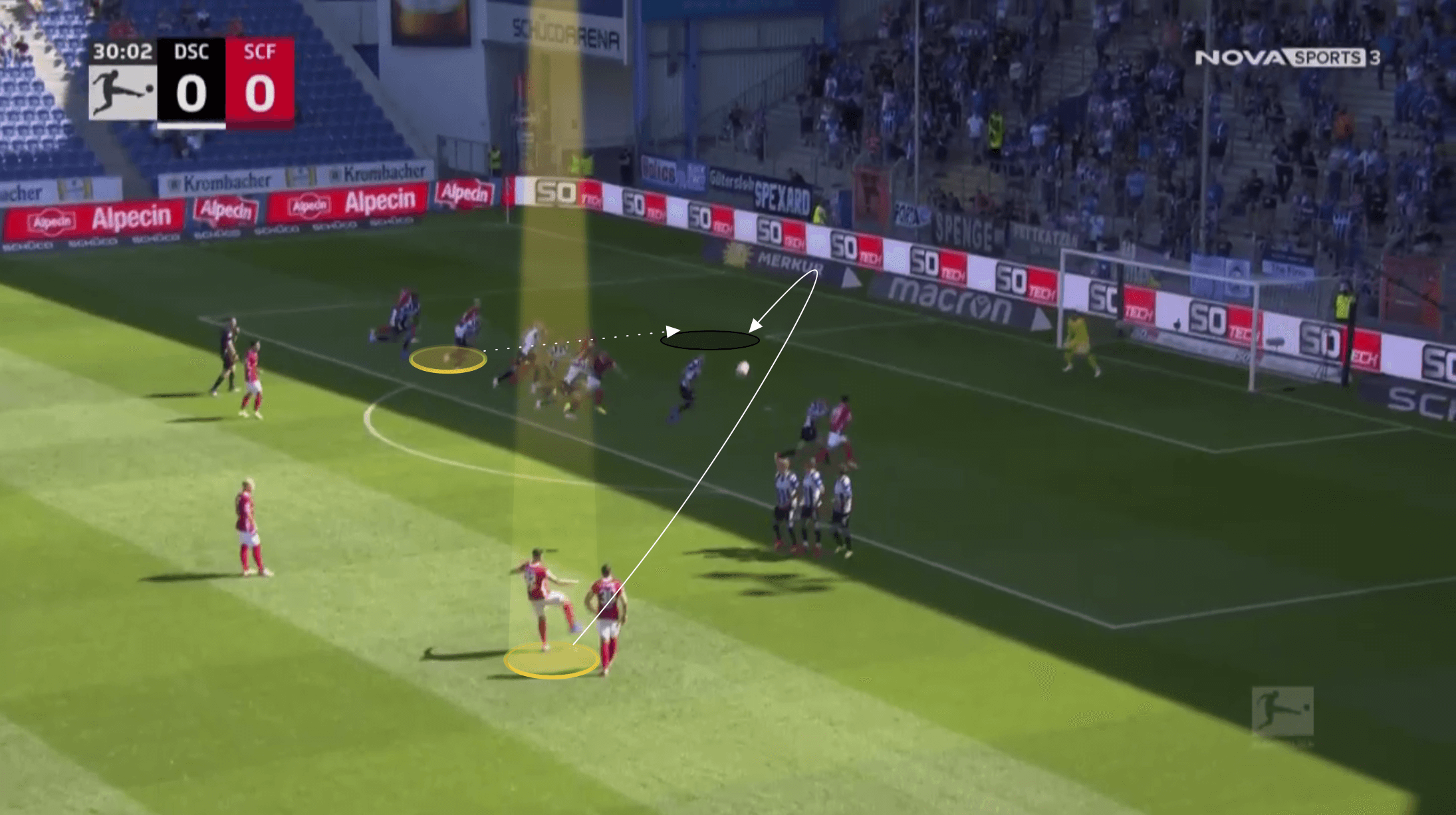 And finally, as a direct threat on goal, Grifo needs to be respected. His goal against Borussia Dortmund earlier this season in Freiburg’s 2-1 win was of the highest quality. Grifo struck the ball from distance and managed to perfectly pick out the top corner of Gregor Kobel’s goal. Grifo often looks to hit his direct free-kicks at a low trajectory, aiming to minimally clear the wall and allow him to hit the ball with enough power whilst still dipping the ball. 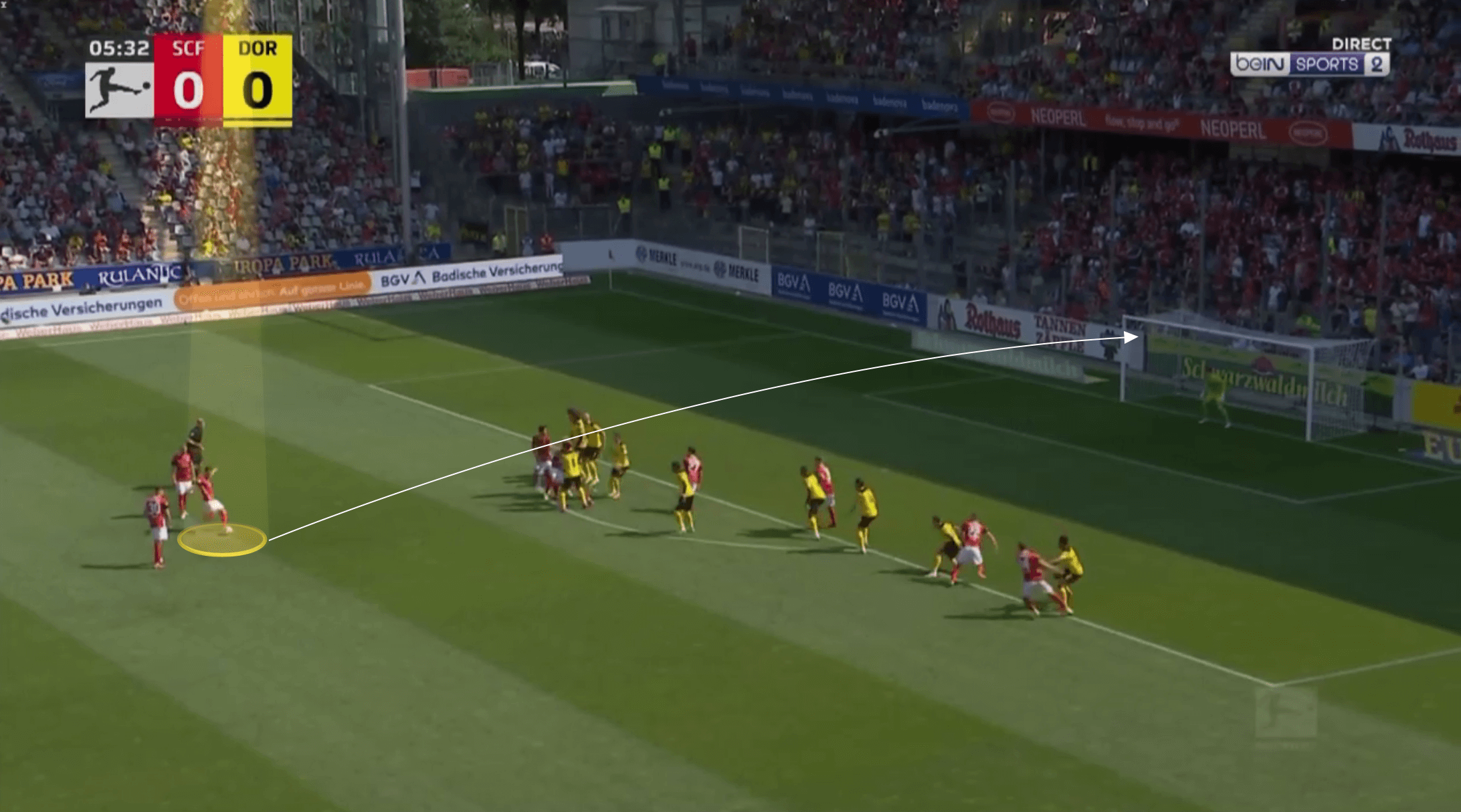 Grifo isn’t restricted to just being a creator from set-pieces though. He has good vision on the ball as a crosser and a passer, whilst he shows moments as a dribbler that allow him to break open defences out of nowhere.

Grifo doesn’t make a high volume of crosses from open play, and frankly could make a higher amount, particularly given his high completion. Grifo has averaged just 1.56 crosses per 90 in the league thus far for Freiburg, and yet his 35% completion is an impressive percentage.

He rarely looks to go down the line and cross with his left, instead often opting to make a late shift onto his right foot before crossing regularly from the kind of area shown in the following image. 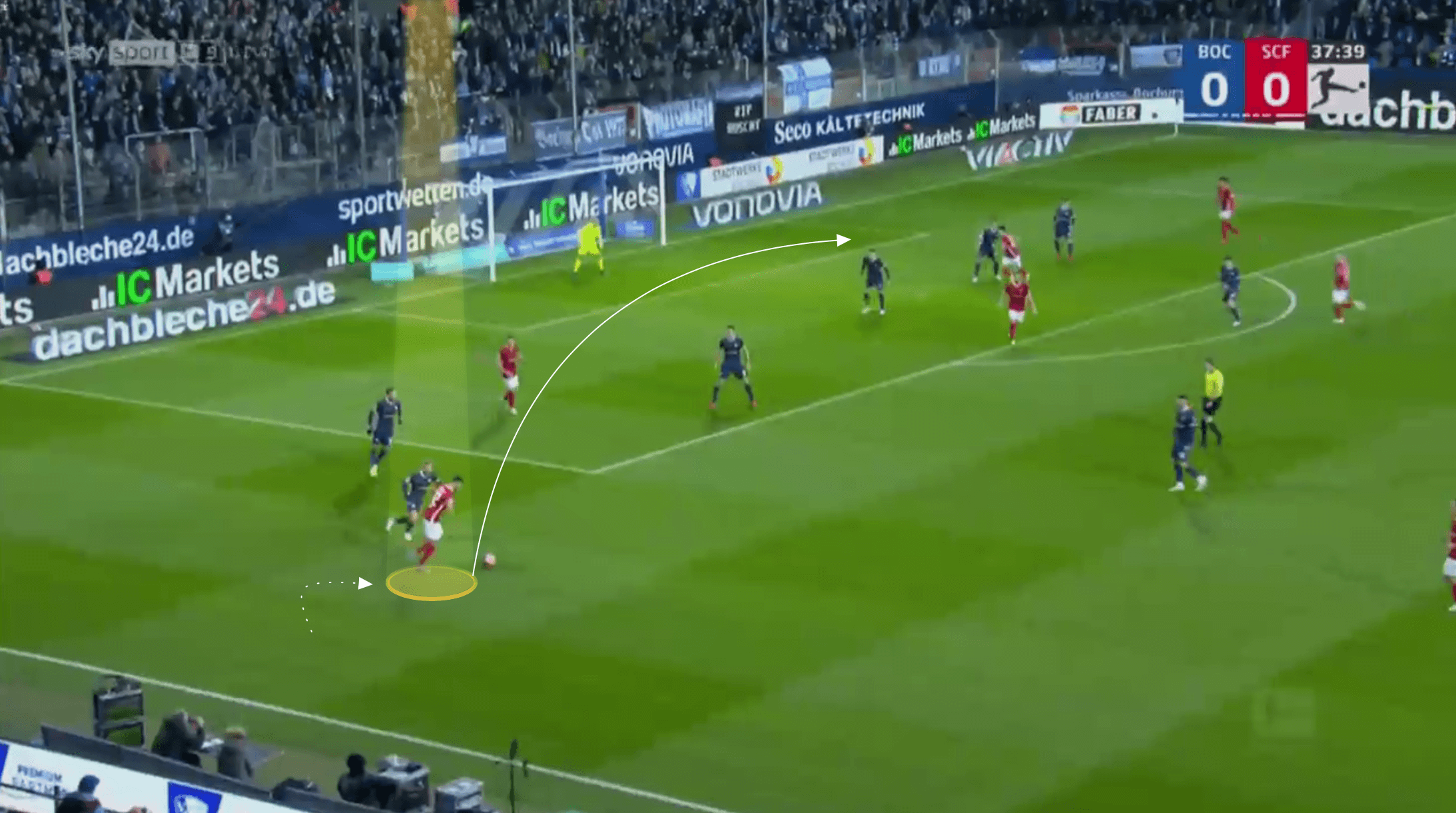 Grifo is confident taking on crosses even when the opposing defence is deeper, with little space to access between themselves and their goalkeeper, whilst they are organised and set. And yet Grifo shows the quality to still be able to recognise a player in space or in a position where they could potentially find it. He prefers to aim for that same central to back post area he targets from set-pieces and will pick out attackers in the spaces between defenders. He swings the ball towards goal, encouraging his attacking teammates to just get enough of a touch on the ball to direct it goalwards. 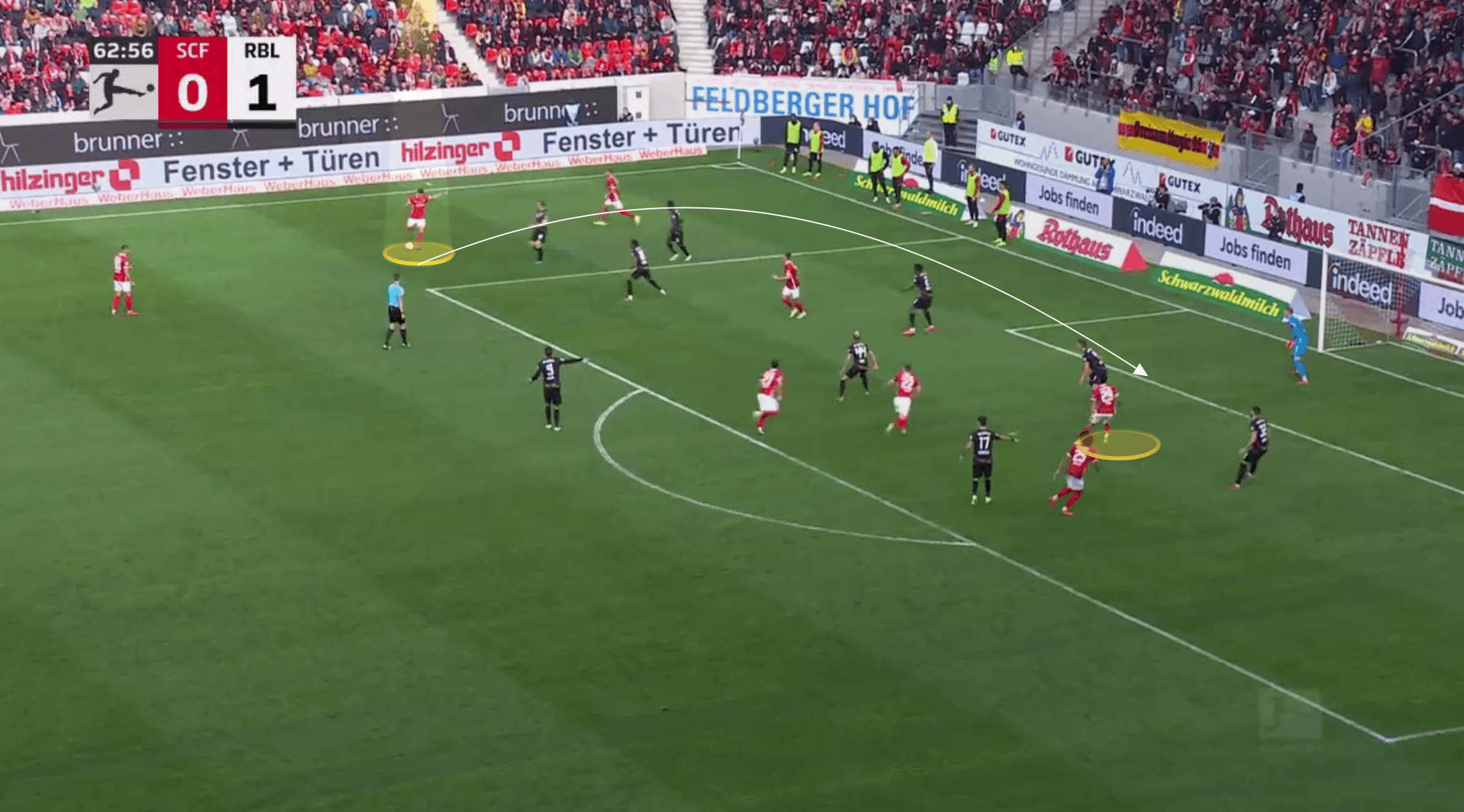 Through Grifo’s keenness to drop into deeper positions he creates interesting passing angles for himself as well. Grifo has an understanding with left-back and Freiburg captain Christian Gunter that is of the highest level, and Gunter recognises, even anticipates when Grifo is going to drop deep to receive, and in turn he will overlap into the space in behind. When Grifo takes the ball in this left-back position his first instinct is to look for the through pass in behind. He hits this pass with pinpoint accuracy and a good weight of pass. 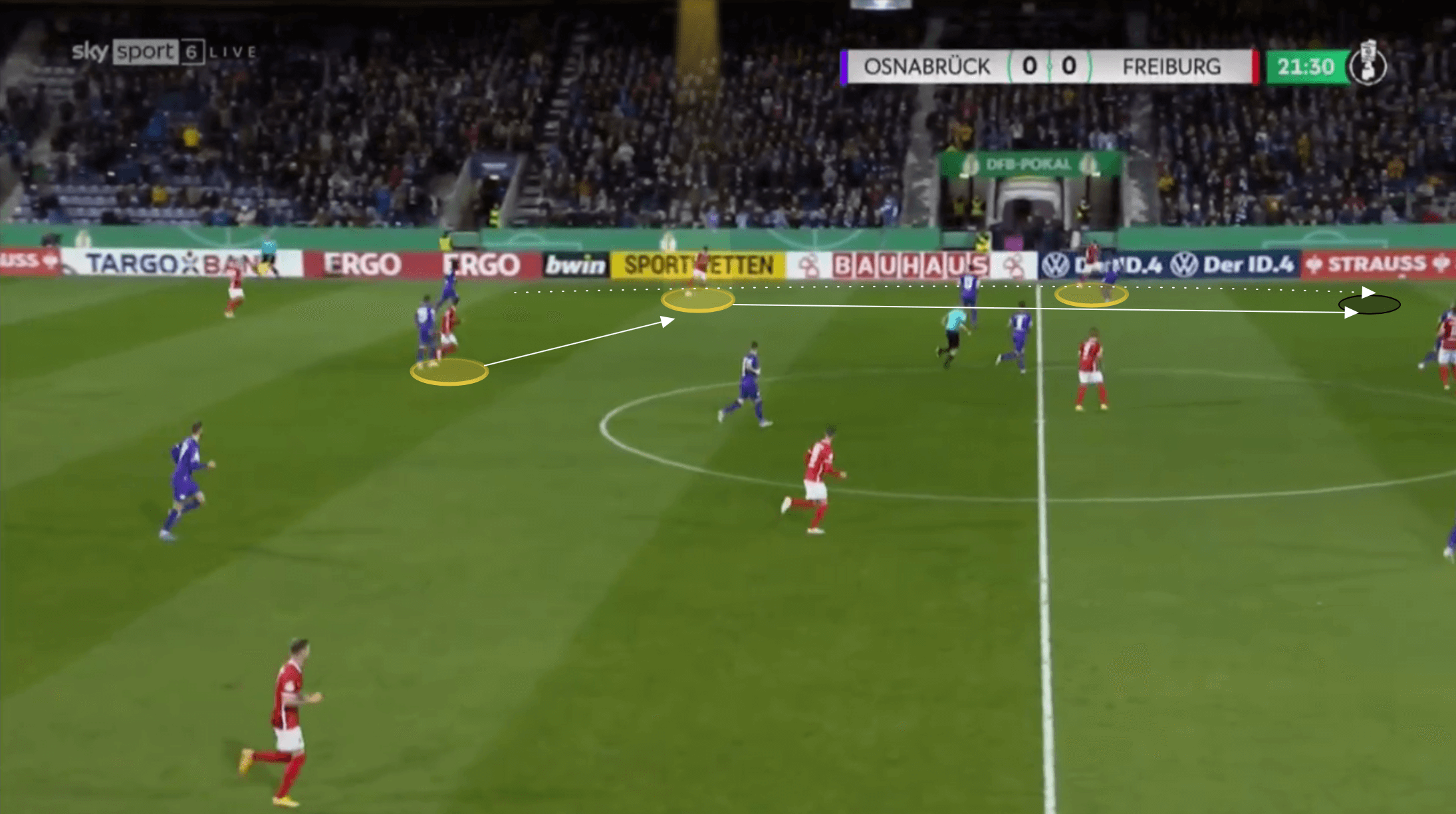 He can hit this pass further up the pitch too, and it is a less conventional but nevertheless highly effective through pass that allows Freiburg to get in behind the opposition full-back with regularity when played. 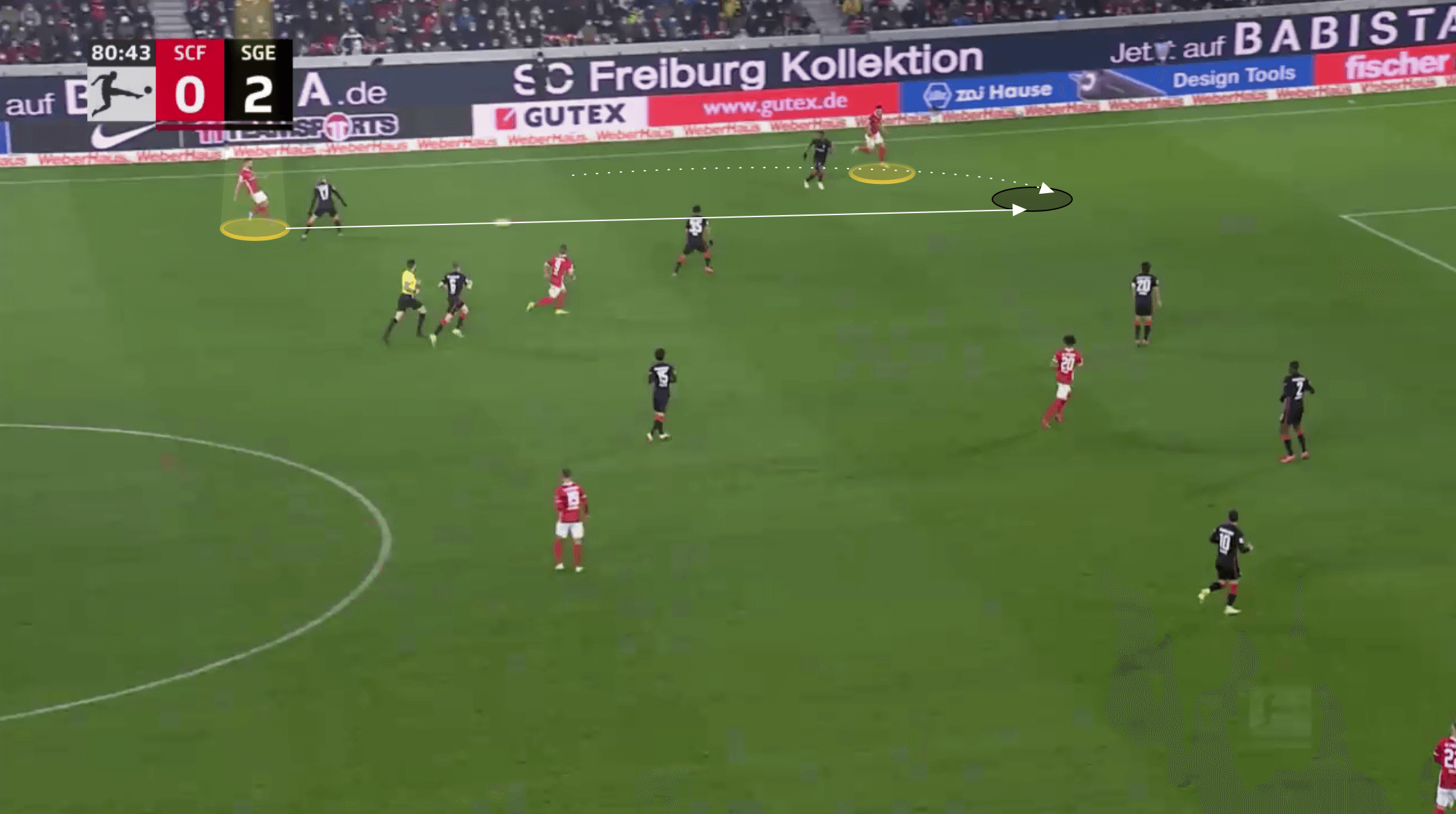 Grifo has an obvious confidence, even arrogance on the ball, that goes hand-in-hand with him attempting audacious passes like the ones shown previously. However, the following example sums up the level of creativity Grifo has along with the understanding of spaces and teammates positioning around him, on top of his overall technical skill. Below he receives the ball from Gunter, before lifting the ball over the top of the three nearby defenders for his left-back to underlap onto. 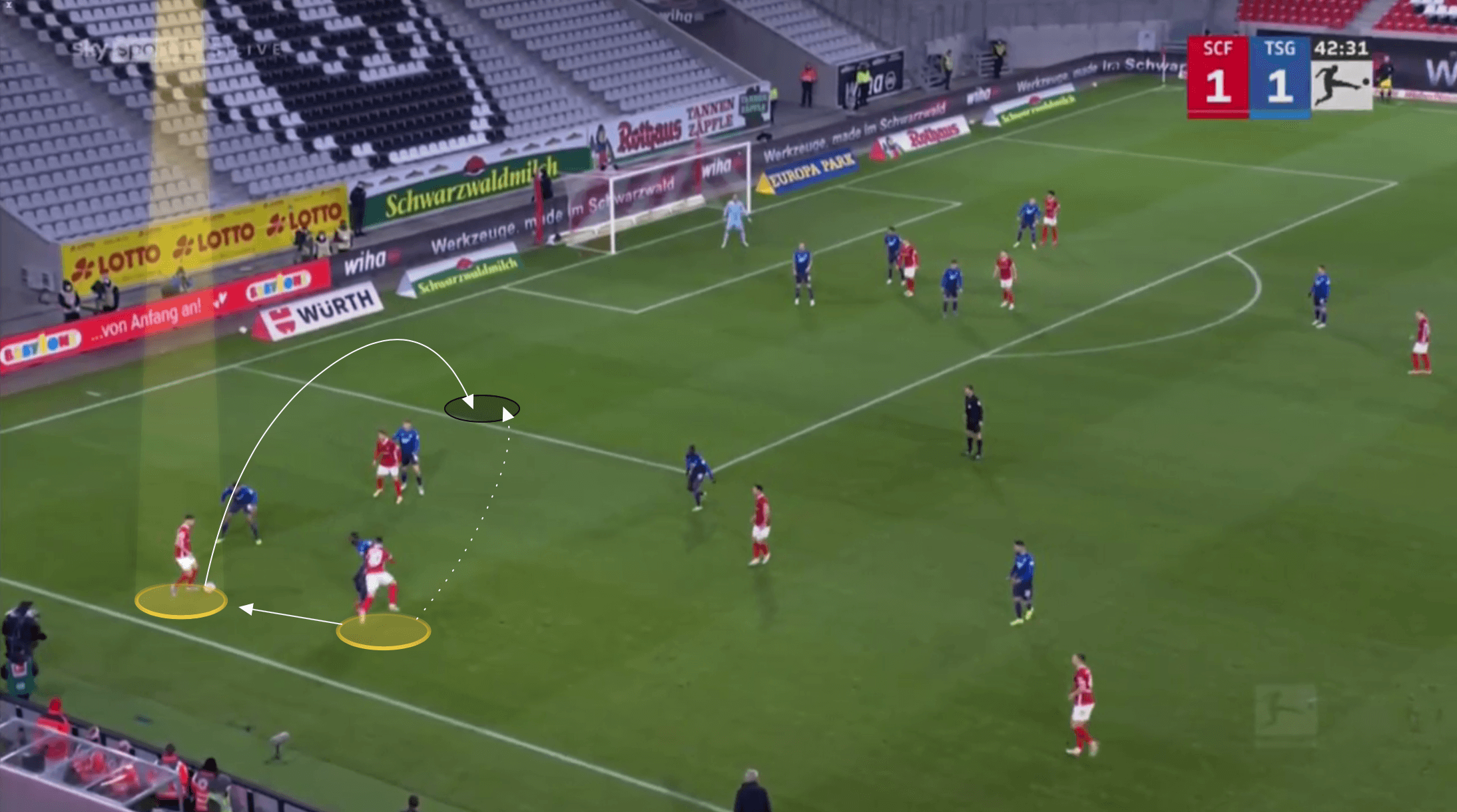 Again as a dribbler, Grifo is perhaps less active than he could be. So far this season the Italian has averaged 3.2 dribbles per 90. Whilst not an insignificant number, for a player of Grifo’s quality on the ball it is a slightly underwhelming average. Even more so when he is completing a very high 58.5% of his dribbles. Once more, Grifo is completing a high enough number where he could afford to take a few more risks and make a few more attempts, just as with his crossing. Ast season he averaged 4.49 and the season before that 5.34, so it is a noticeable drop off from previous seasons. Nevertheless, Grifo regularly retains the ball when attempting to take on an opponent. He may keep his dribbling simple, using a simple touch one side of the defender before looking to move the ball on. However, he has an eye for the more audacious attempts too, and below we can see this as he nutmegs the Stuttgart full-back, breaking away from both players surrounding him. 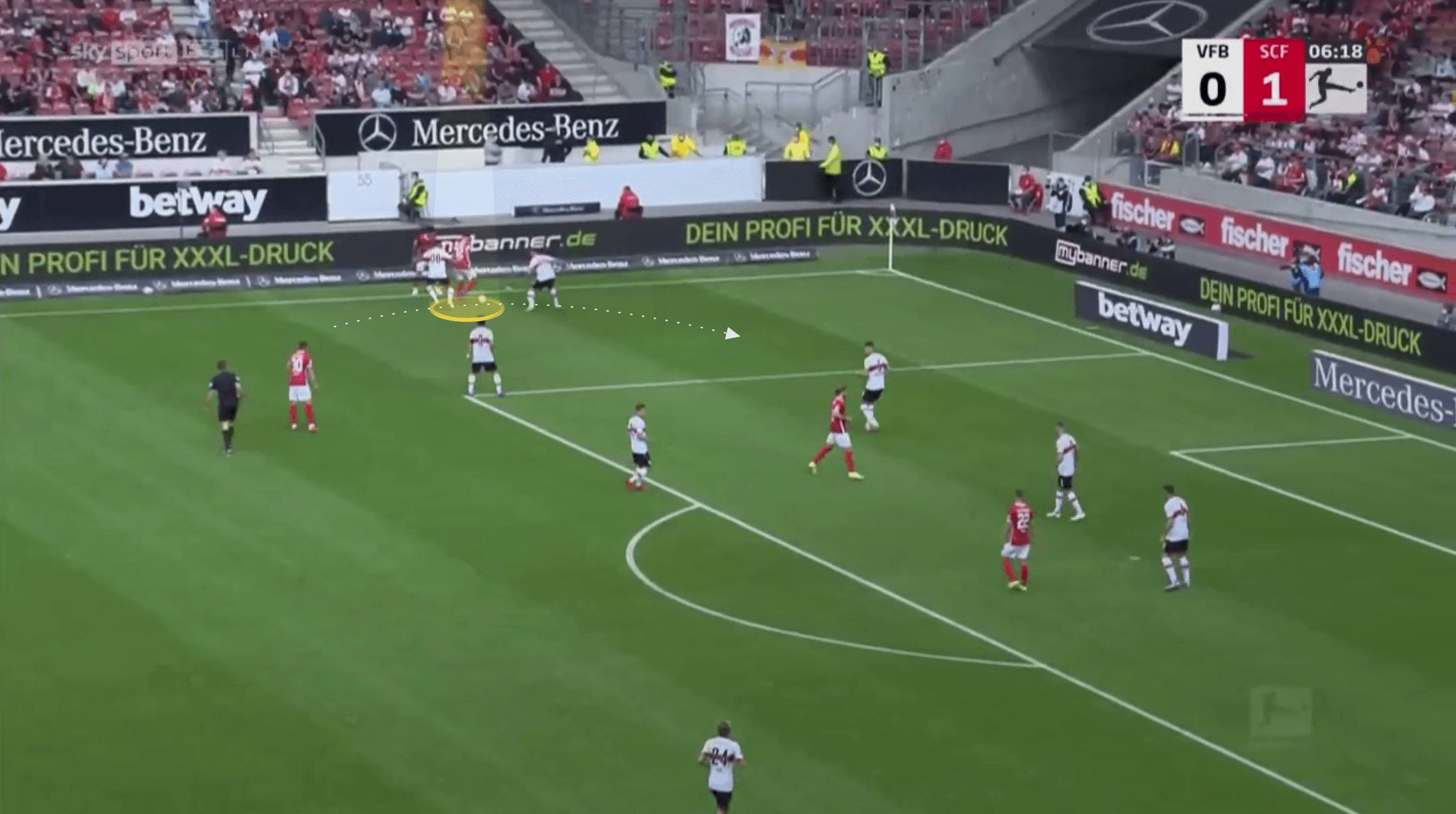 As mentioned, Grifo’s relationship with Gunter is clearly well-drilled and at a level you would expect from two players that have played with each other for a number of seasons.

They look to avoid playing on the same vertical line. Grifo enjoys drifting inside into the half-space. From this position, he can get on the ball in between the lines and away from pressure. However, Grifo will also aim to time a run in behind if Gunter receives in a high and wide position. Gunter is able to take this position due to Grifo drifting inside, and he will instantly look to receive and play behind for his winger, knowing Grifo will already be timing his run into the space behind the opposition right-back. 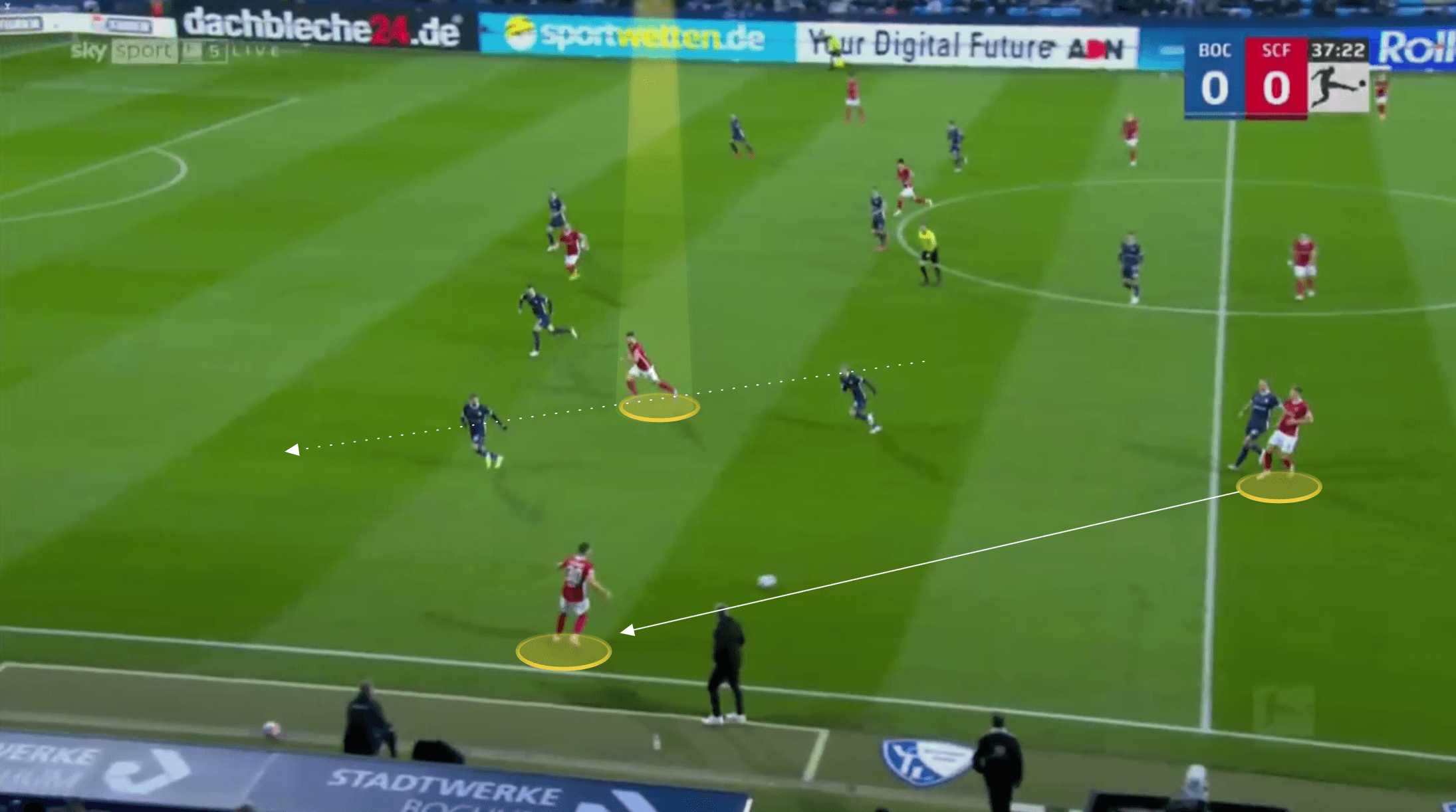 Grifo will react to Gunter playing in a more narrow position too though, and enjoys the space afforded to him when he operates out wide on the wing. Below we can see Gunter now on the ball in the half-space himself, and Grifo has reacted to this by stretching the pitch horizontally and finding space out wide. 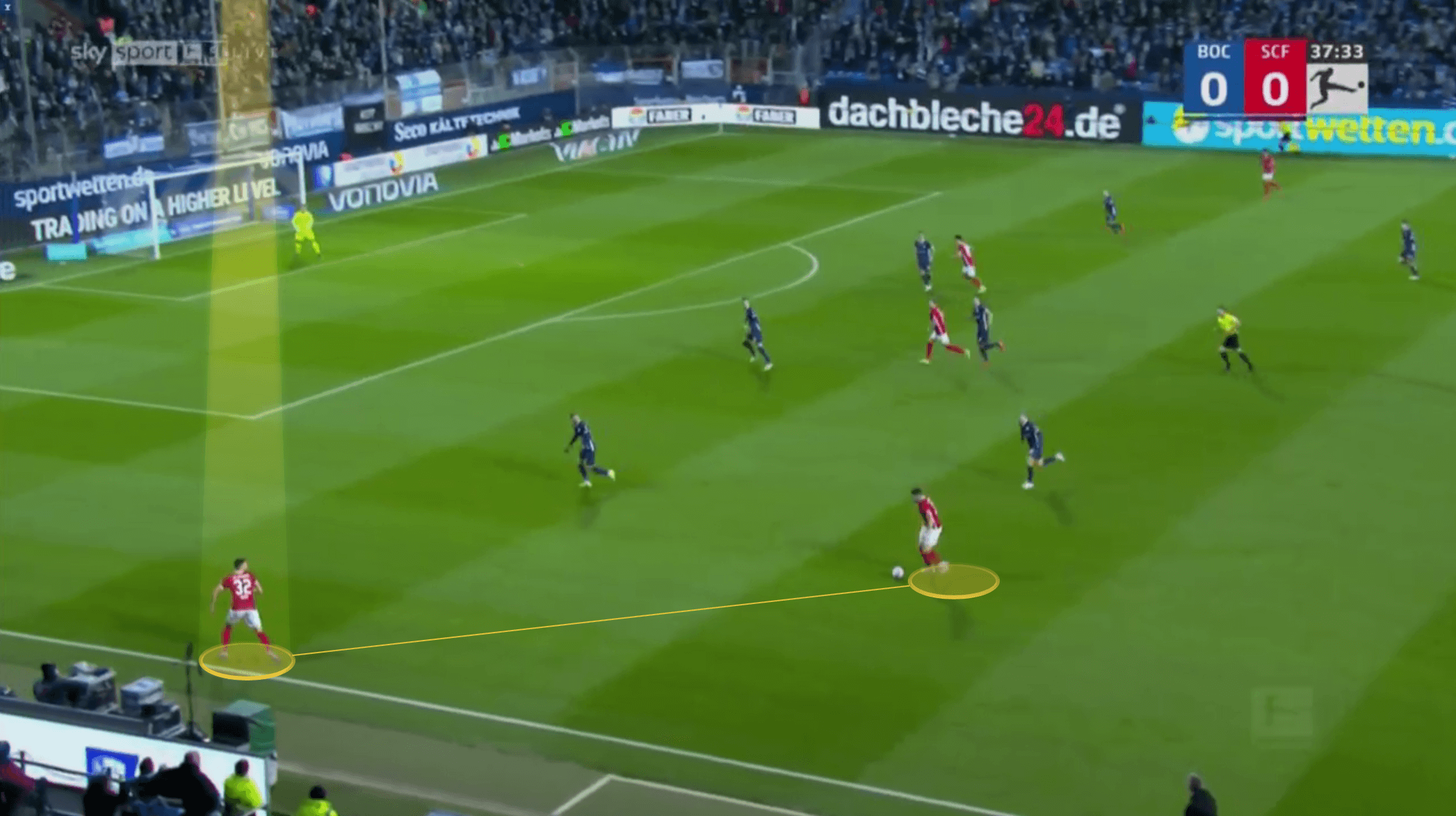 When a player takes the ball in a more narrow position like we’ve seen from Gunter there, Grifo reacts quickly but importantly continues to offer for the ball even as he gets out wide. Grifo opens his body up as soon as possible and scans as he does so, checking to see how much space he has, but also for the positioning of his attacking teammates inside the area. 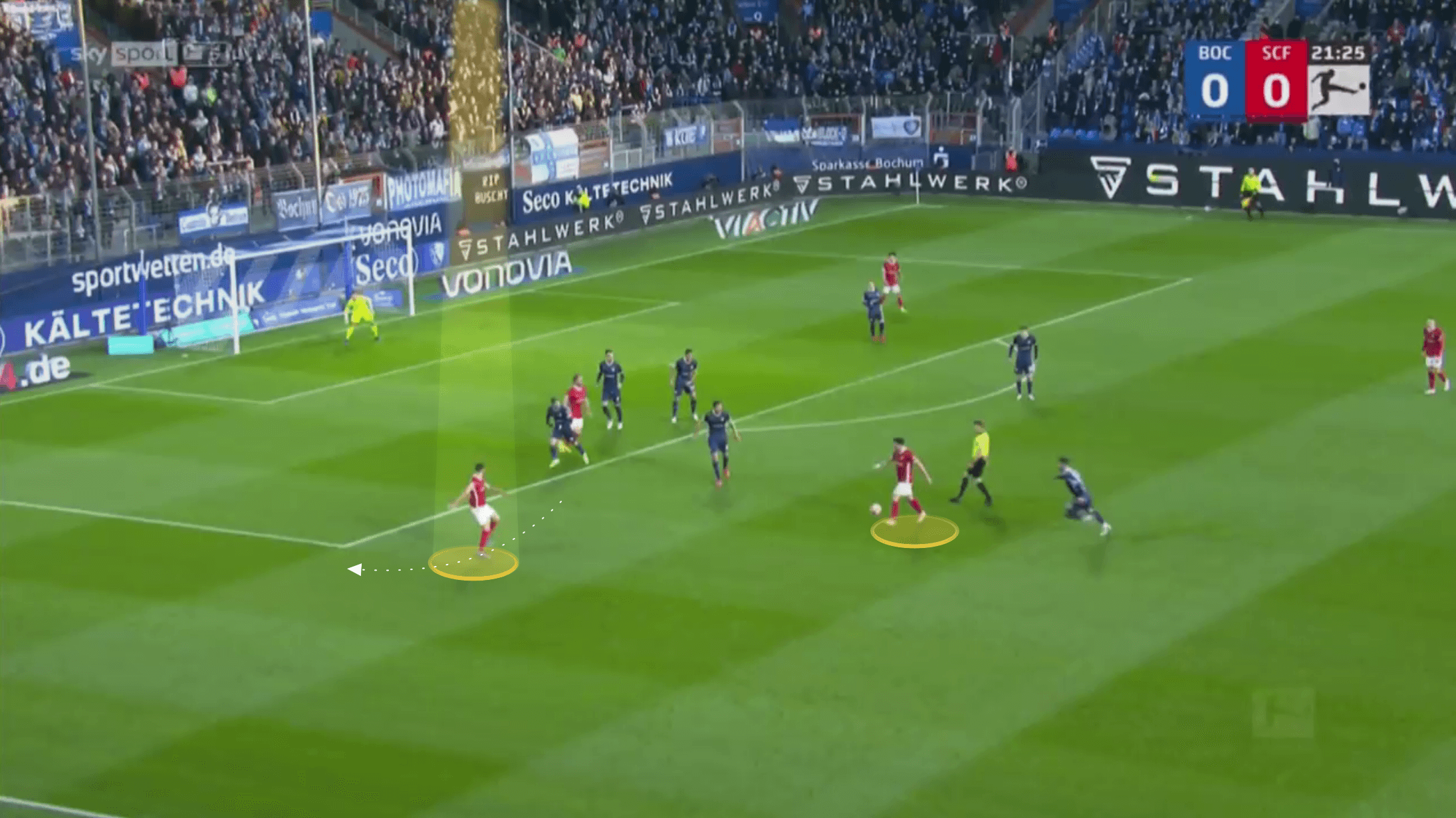 Grifo enjoys exploring different spaces, and his movement off the ball is anything but static. After playing a pass he is quick to change his position and offer a new passing option. He is confident in receiving in tight spades in the centre of the pitch and times runs to receive in these spaces incredibly well. Below we can see home recycling the ball back to one of his centre-backs, before then rotating into a central position. 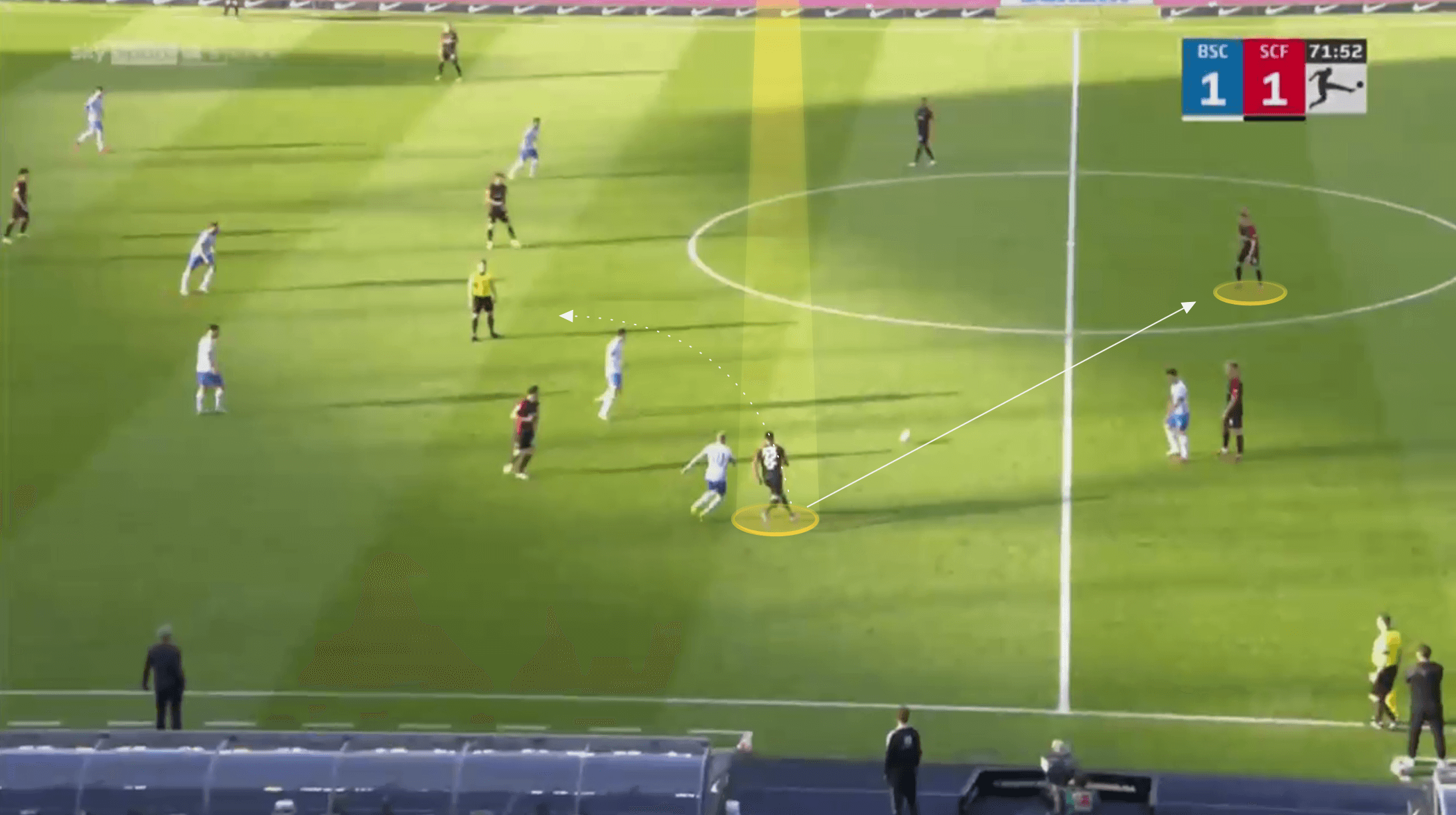 As the ball is played forward Grifo is able to time his run to receive a first-time pass off of his receiving teammate, before quickly breaking through the line himself on the ball with a dribble. 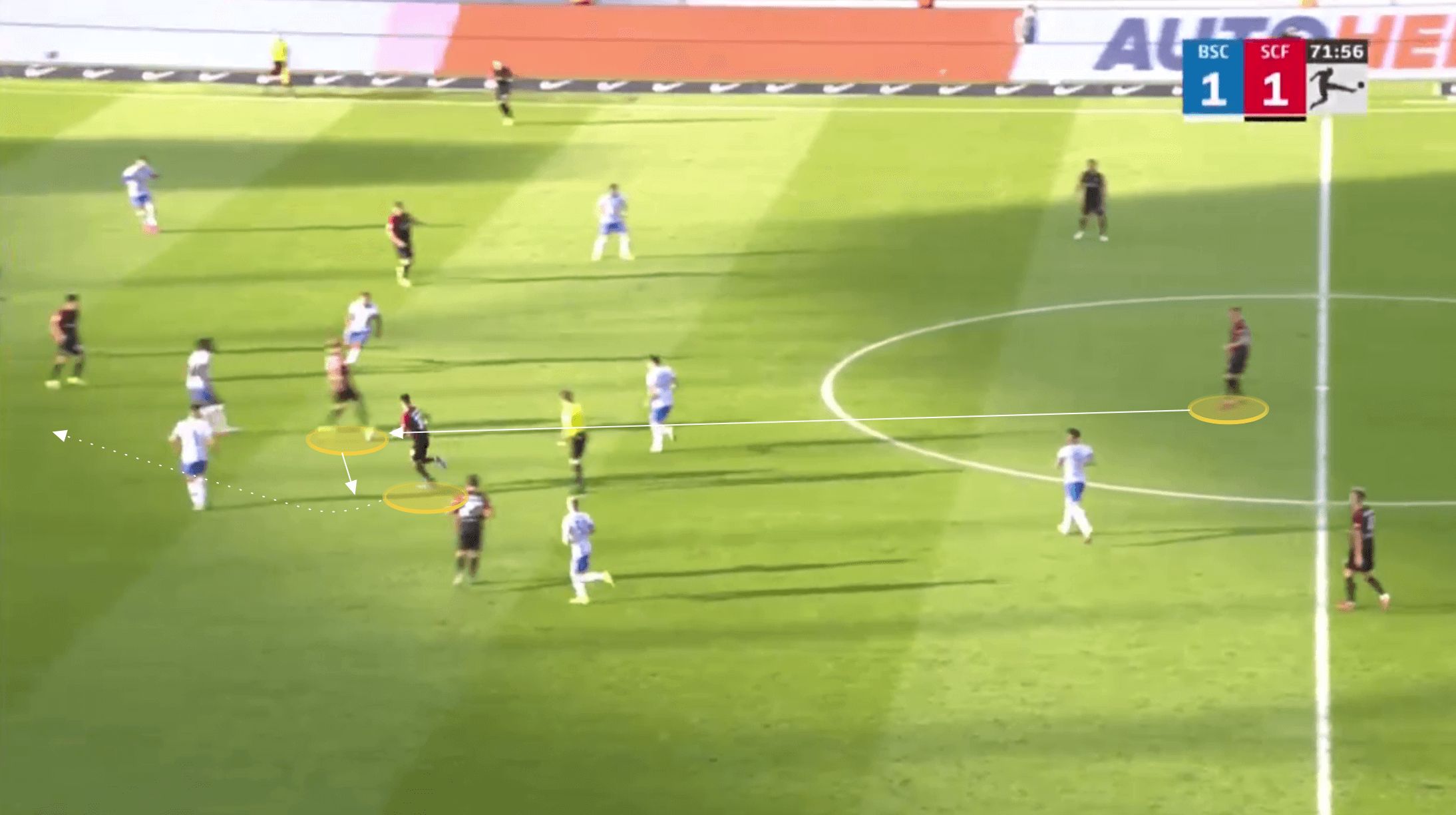 Grifo continues to impress for Freiburg and has shown a good level of consistency in his performances over the past few seasons. This consistency is likely to attract interest this winter and next summer, so it will be interesting to see if Freiburg can convince the Italian international to renew his contract. He naturally suits a team who look to capitalise on set-pieces, and play with inverted wingers, however, he is given a certain freedom with his play that may not be afforded to him at other clubs, whilst his understanding with Gunter on the left-flank is one that won’t immediately be replicated at a new club. Regardless of this, Grifo has proven to be an important part of this Freiburg side, and if they are to return to their form from earlier this season, he will play a big role in helping Christian Streich’s side achieve this. 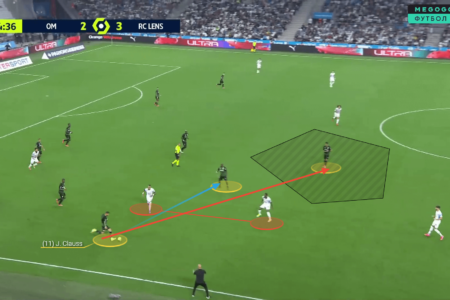