On Saturday afternoon Bayern Munich and surprising title challengers Freiburg met in the Bundesliga. Before this game, only three points and Borussia Dortmund separated the two sides. The home side Bayern managed to put an end to Freiburg’s incredible unbeaten run to start their 2021/22 league campaign, thanks to a 2-1 victory. Bayern initially went ahead courtesy of a first-half goal from Leon Goretzka, before doubling their lead in the second half with a classic Robert Lewandowski poacher’s finish. However, Freiburg rallied late on to notch one back in stoppage time with Janik Haberer slamming home to make it a tense finish at the Allianz Arena.

Bayern Munich lined up in a 4-2-3-1 with Manuel Neuer, of course, starting in goal. Alphonso Davies played as a flying left-back, with Lucas Hernández, Dayot Upamecano and Niklas Süle making up the rest of the back four. Süle, normally a centre-back, generally stayed more narrow as a third centre-back at times, although he was occasionally seen darting down the right flank. In midfield, Joshua Kimmich was the deepest of the double pivot, with Goretzka often looking to play beyond the Freiburg midfield line, whilst Thomas Müller did as Thomas Müller always does and roamed across the pitch from the central channel all the way to the right-wing. Leroy Sané and Kingsley Coman were given the starts on either side of Müller, with Lewandowski leading the line.

As for Freiburg, they had Mark Flekken in between the posts, with a back three in front of them consisting of Manuel Gulde, Philip Lienhart, and Nico Schlotterbeck. Lukas Kübler and Christian Günter took the wing-back positions, whilst in the middle, Nico Höfler and Maximilian Eggestein played as the double pivot in the 3-4-3. Freiburg’s front three saw Vicenzo Grifo and Lucas Höler play either side of the tireless Woo Yeong-Jeong. 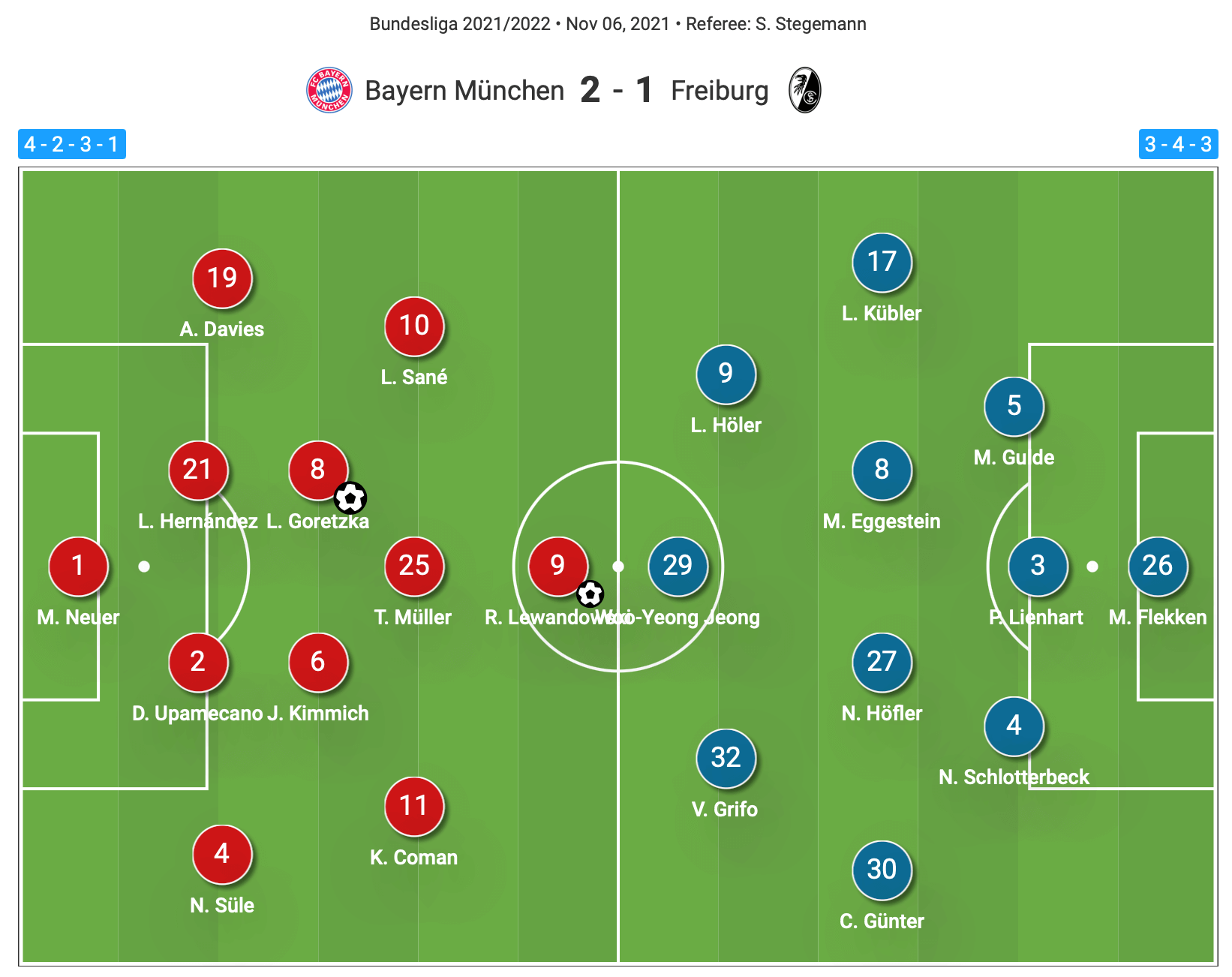 This tactical analysis will continue to give an analysis of some of the key tactics used by the teams in this Bundesliga fixture.

Bayern looked to firstly break down Freiburg and find the space on either side of their central-midfield pairing. Upamecano was a key cog in this process with Julian Nagelsmann placing a lot of responsibility on the young centre-back to be the one to break lines from the back. Upamecano generally looked for Müller or Goretzka, however, as we’ll look at momentarily, he would also look to switch play.

The relationship between Goretzka and Müller was key. It’s no secret when you play Bayern that Müller will look to make runs into the half-space where he can receive the ball unmarked, before picking apart your defence with a through pass or even looking to take on a shot himself. As such, teams prepare to stop him from doing this, and therefore, Goretzka’s movement has to be exceptional to assist his teammate in finding space.

In the image below we can see how Goretzka, highlighted centrally, is looking at Müller despite Upamecano having possession. He is waiting for Müller to make his run inside from his wide starting position. The run inside is his cue to make a realistic run towards the ball, drawing Freiburg’s attention to himself, rather than Müller. 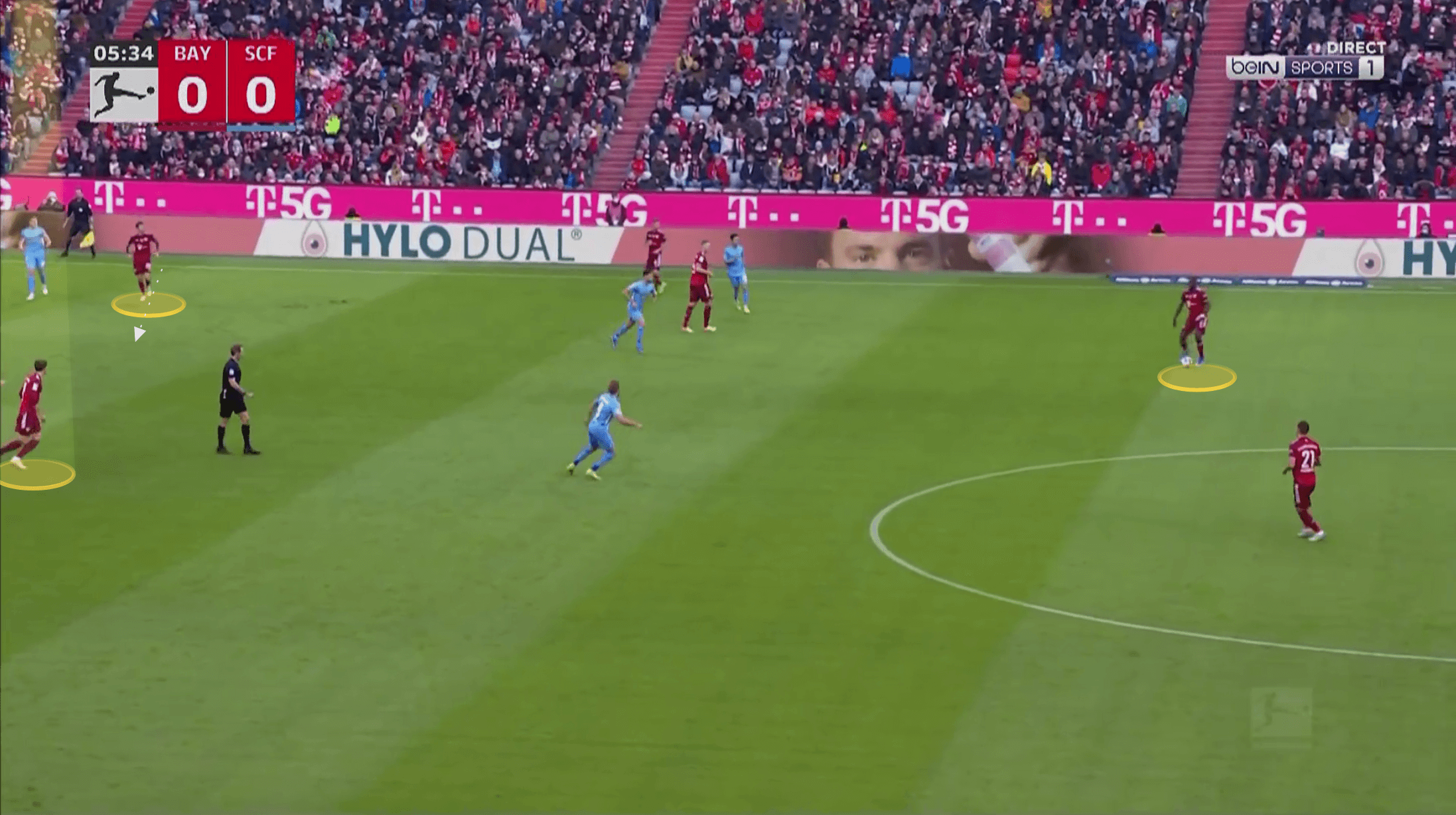 This is exactly what he managed to achieve, making an aggressive run towards Upamecano, drawing both Eggestein and Höfler with him. As we can see in this next image, Upamecano only had eyes for Müller, and this run facilitated the pass into Müller, giving him plenty of space to receive the ball. 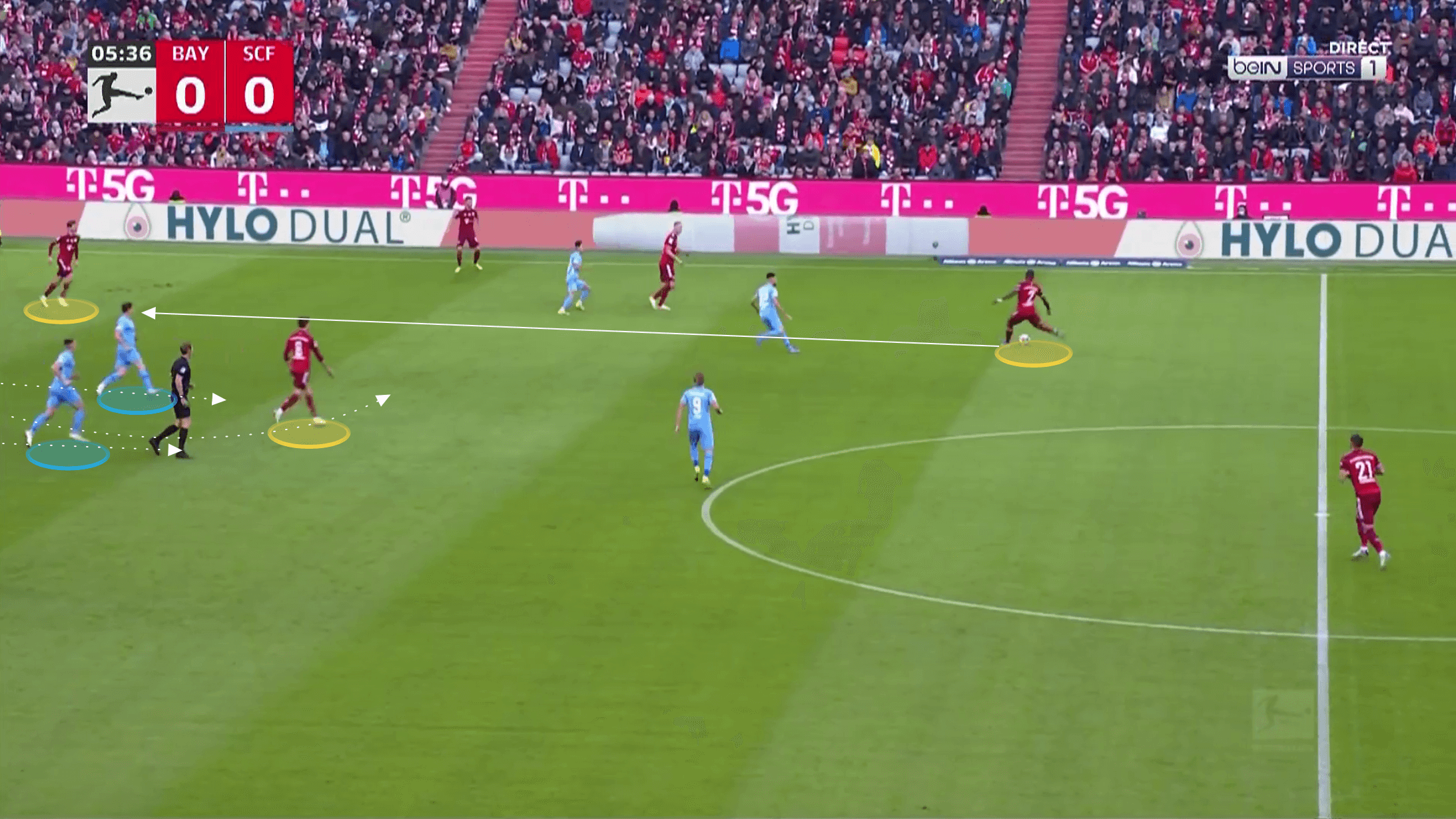 It was this relationship that led to Bayern’s opener. It was a swift move, with Upamecano drilling the ball into Goretzka who played first time into Müller. It was incredibly fast-paced in real-time and Gortezka’s ball around the corner to Müller showed outstanding awareness. It was by no means a blind pass though, for as we’ve seen Goretzka would have been scanning to see the positioning of his teammate well before this pass was played. 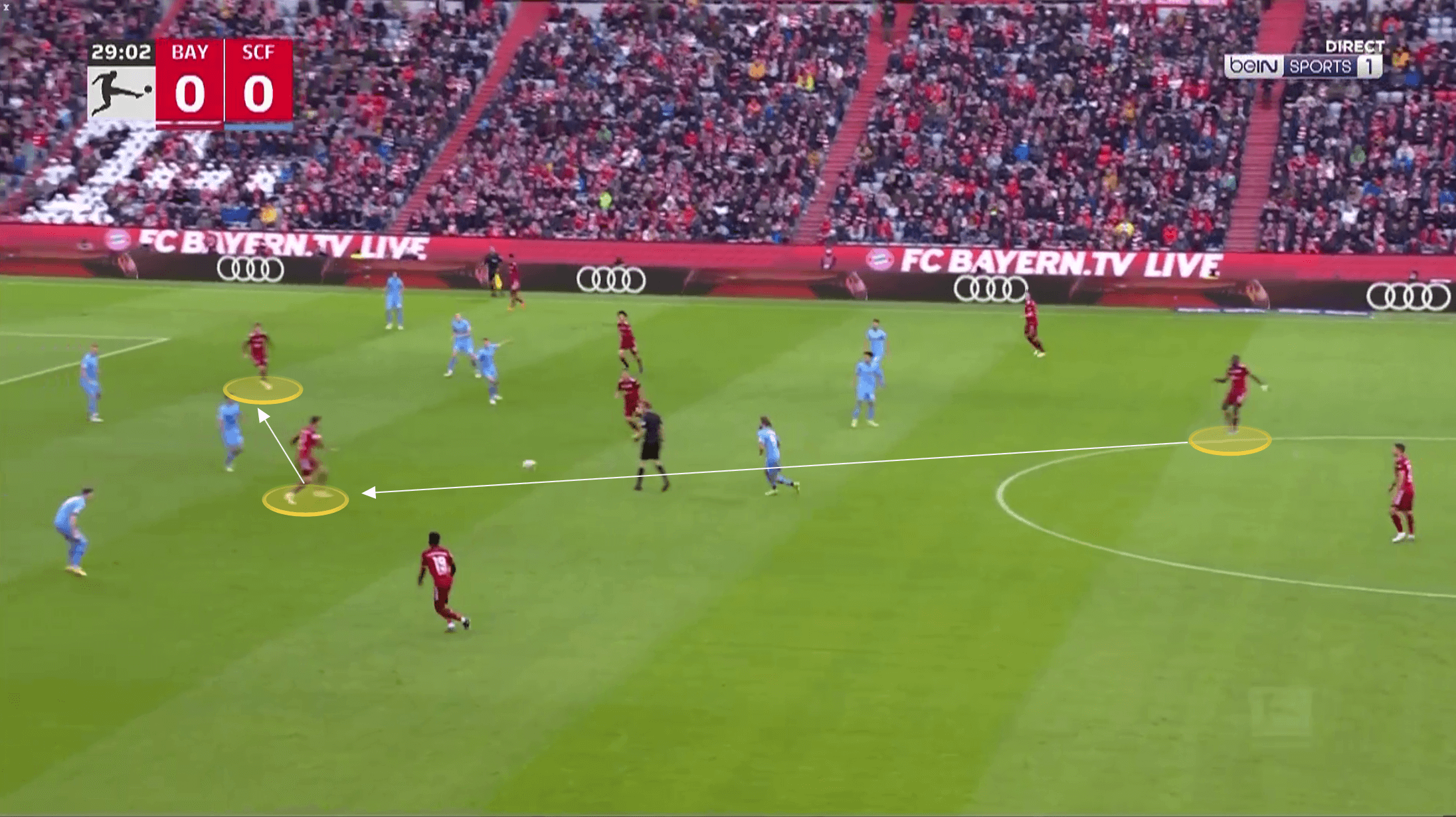 After playing the pass Goretzka could then continue his run into the box, being found by a through pass from Müller. This goal couldn’t have happened though if Lewandowski hadn’t been sharp to see the space he could create for Gortezka. With Müller in possession, Lewandowski made a run away from the centre, looking for a straight pass from Müller. He didn’t receive the ball but instead dragged right-sided centre-back Gulde with him, leaving room for Goretzka to receive and finish. 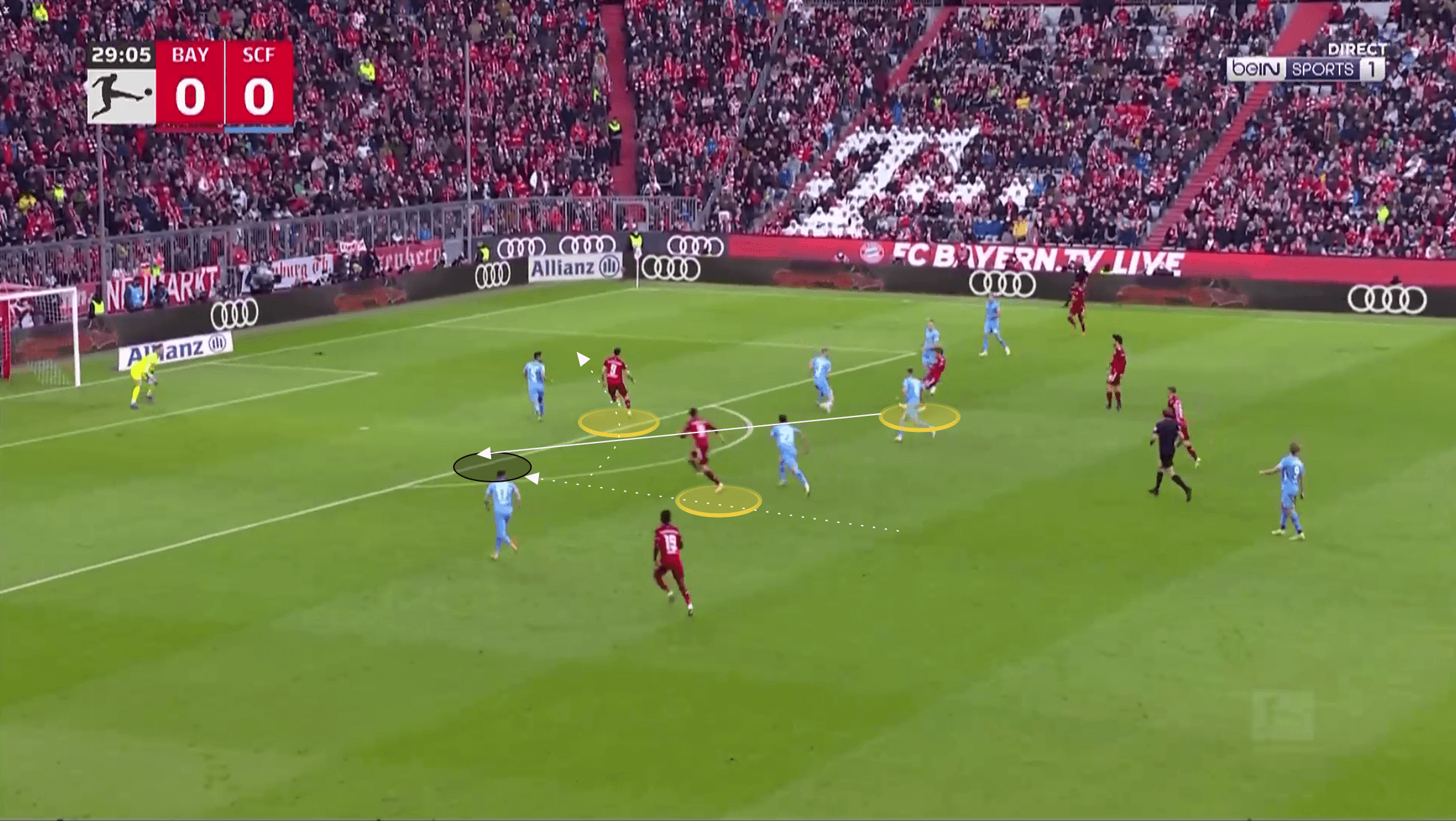 Bayern would also use the threat of Davies out wide to ensure that Freiburg couldn’t purely sit compact and look to block these passes into Müller and co. They allowed Freiburg to even get compact at times, knowing they could simply draw them in before releasing Davies down the left flank. Bayern would keep a compact shape themselves with plenty of combinations in tight areas. Kimmich, Upamecano, and one of Müller or Goretzka would regularly combine in a tight triangle, whilst there would be plenty of teammates surrounding this trio ready to receive with a quick flick away from this central triangle. In the image below the three combine quickly before Upamecano makes the switch out wide to the high-positioned Davies. 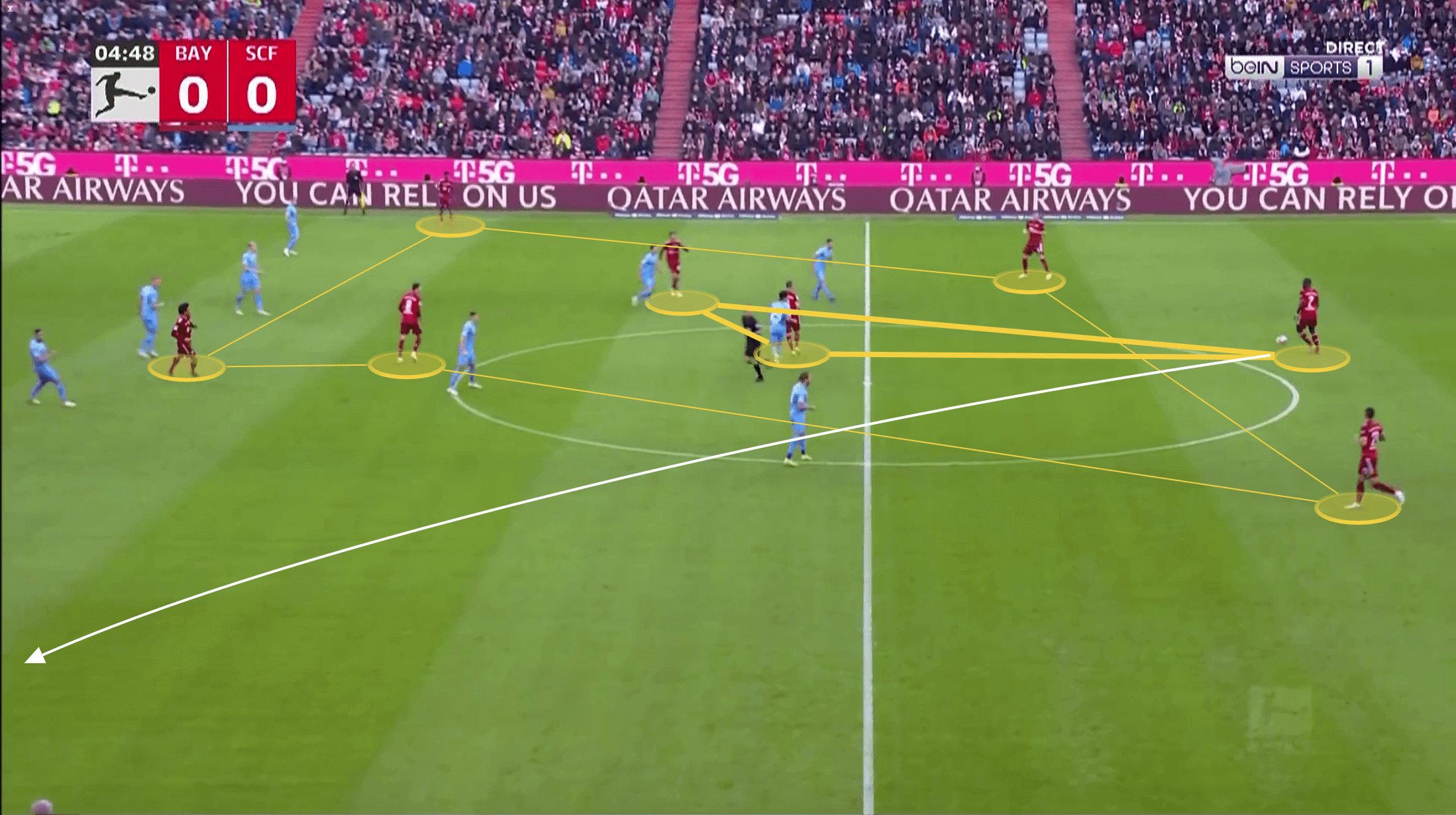 Freiburg looked to nullify the threat of Kimmich by keeping a tight pressing front three. To combat this, Bayern would look to focus their play on getting the ball into Goretzka, highlighted in the image below. 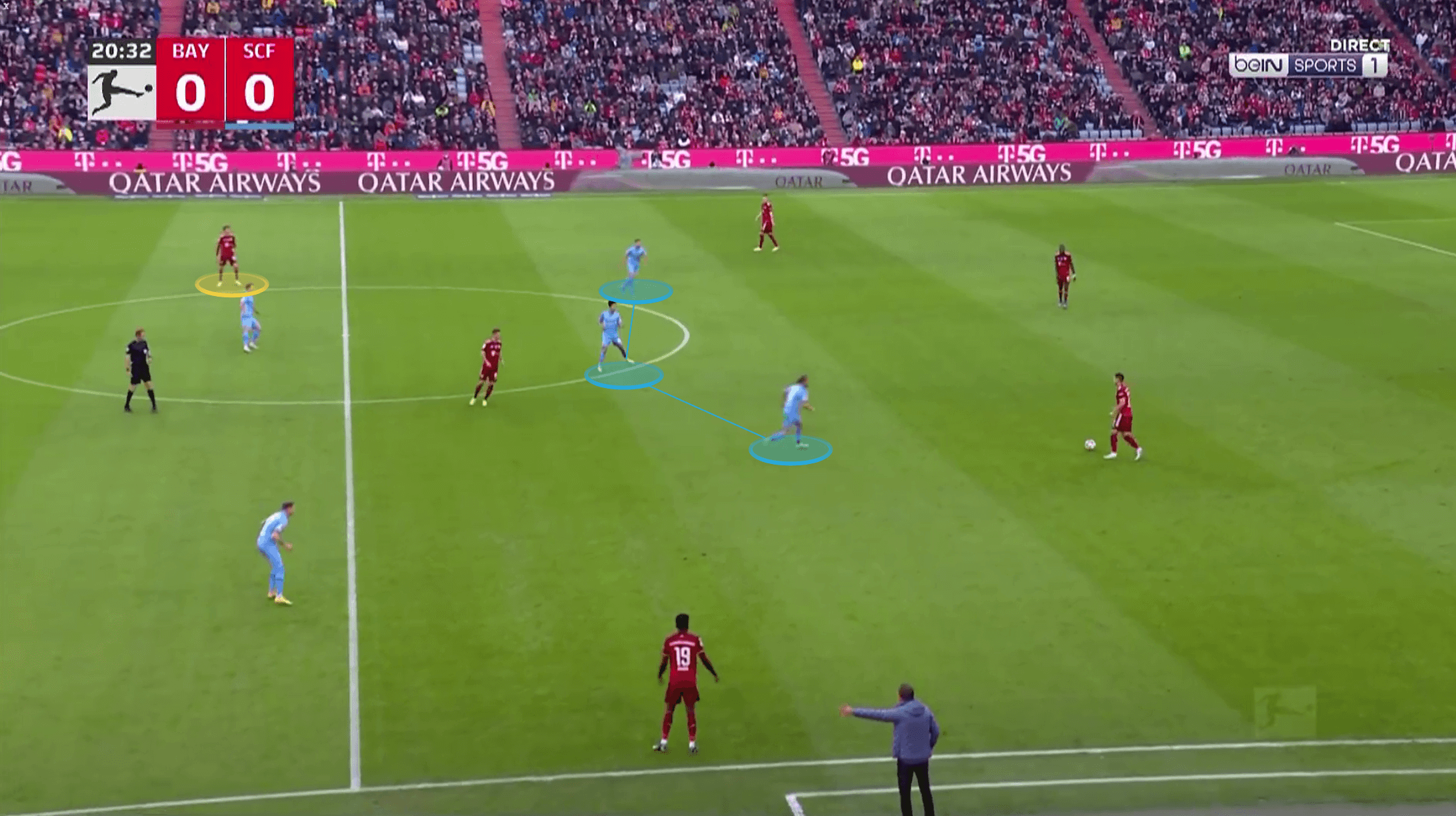 Their centre-backs would make aggressive inroads into the central channel, further narrowing Freiburg’s front three. Below Hernández drives inside, before laying off to Upamecano, who in turn did the same. We can also see in this image how it changes Freiburg’s front three into a two with Yeong-Jeong dropping deeper to stop Kimmich receiving. 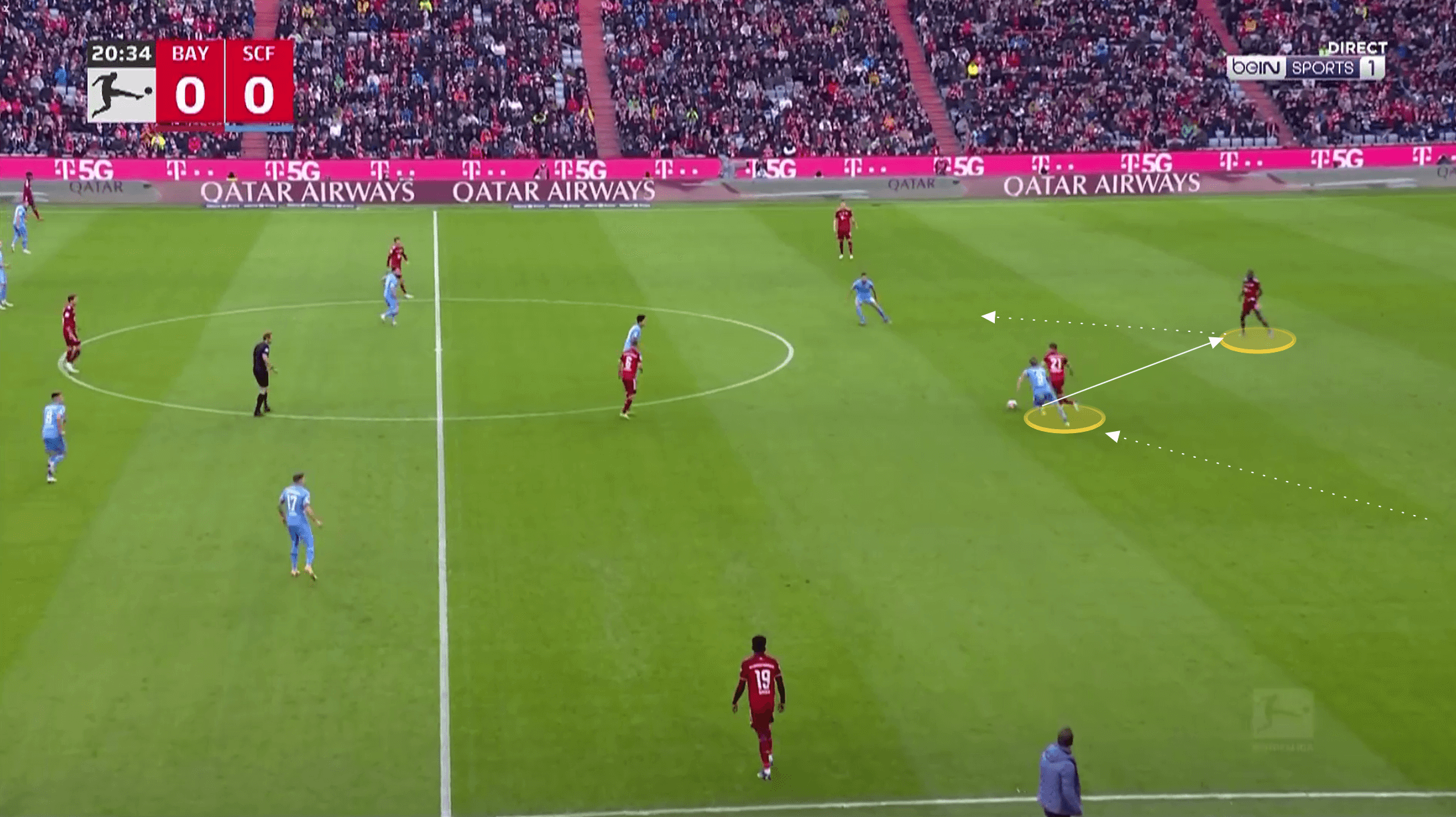 These forward dribbles from Bayern’s centre-backs forced Freiburg’s press to lose its shape, and it provided opportunities for them to break lines and play outside Freiburg’s midfield two, into Goretzka. We can see this pattern happening as Upamecano plays into his midfield teammate after dribbling forward. 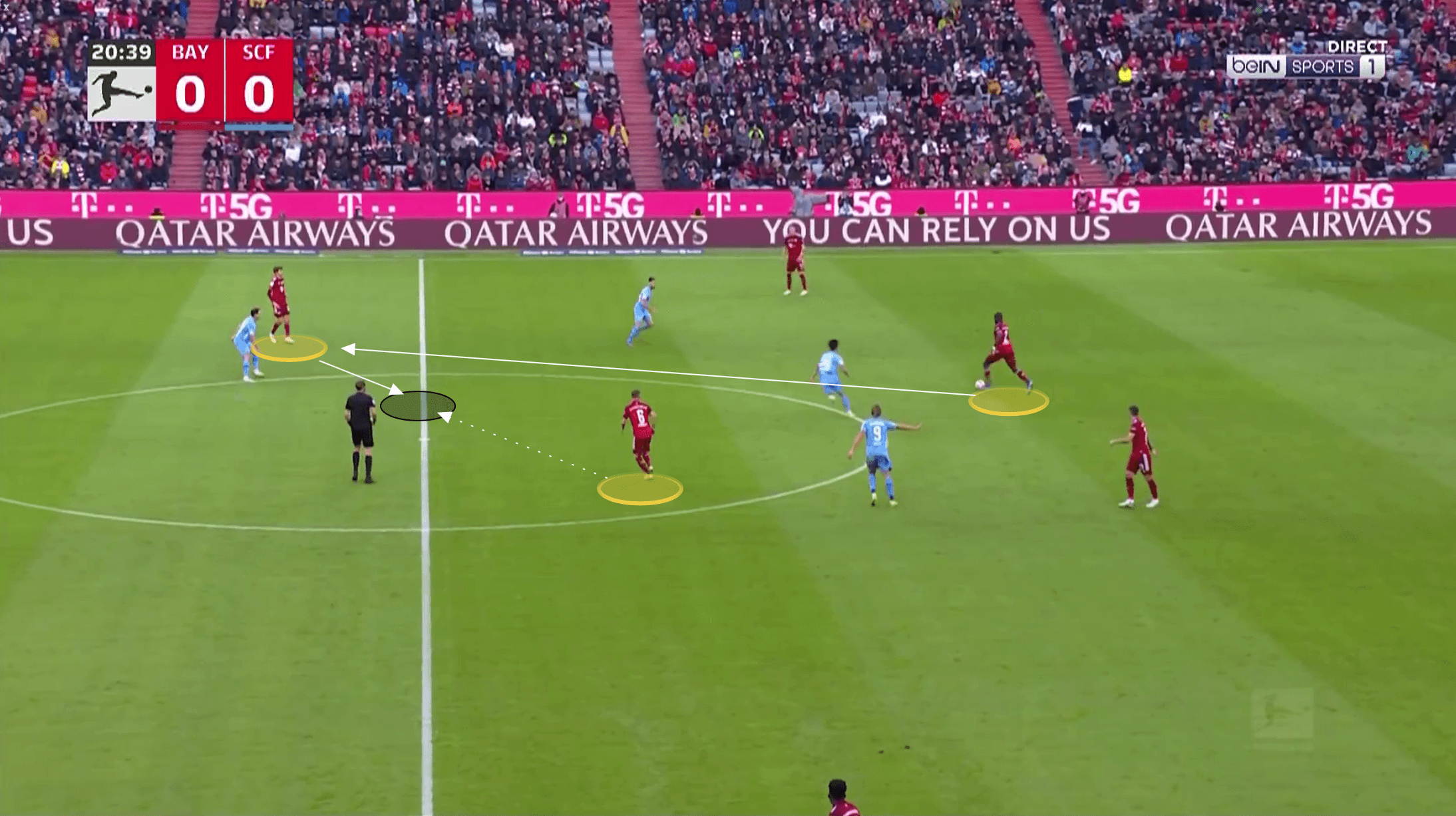 With Grifo not wanting to come too far inside, Yeong-Jeong had to leave Kimmich to press Upamecano. Kimmich could then drop close to Goretzka before receiving the short pass.

Kimmich was then able to dictate play once in possession and in this next image he drove forward before striking the diagonal ball into Sané, with Davies quickly overlapping on the vacant left side of the pitch, creating the 2v1 on Kübler. 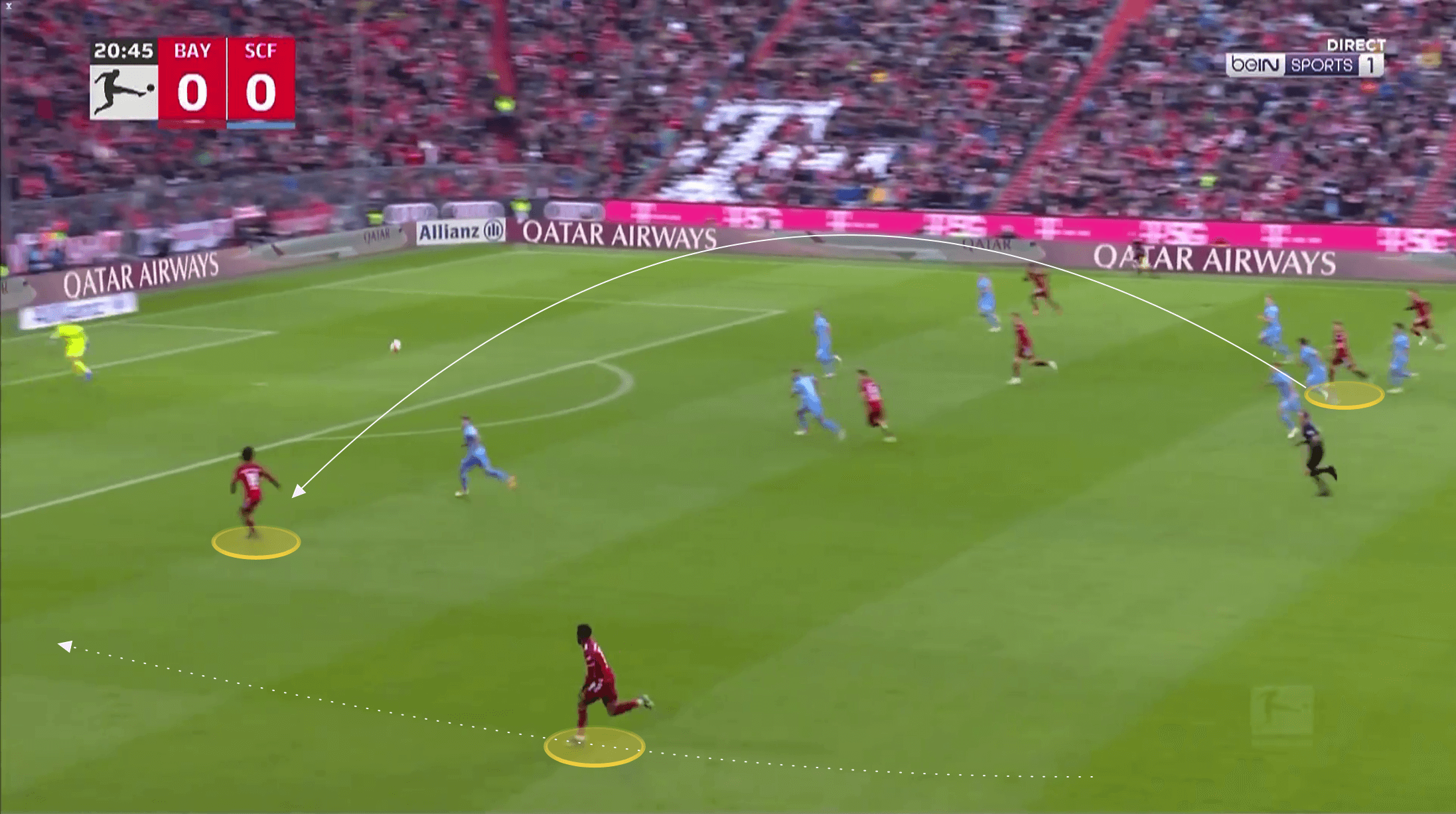 Bayern dominated possession but were quick to catch Freiburg cold where possible too. When playing with large swaths of possession it’s important to break that pattern and not let the opposition have their way of getting men behind the ball at every possible moment.

The swiftness with which Bayern played forward was incredibly impressive. A perfect example of this can be seen below as Yeong-Jeong’s cross was intercepted before a sequence of one-touch passes facilitated a quick break for the home side. All of these passes shown were played first-time, and we can see Sané and Davies reacting quickly to this turnover of possession, pushing forward immediately. 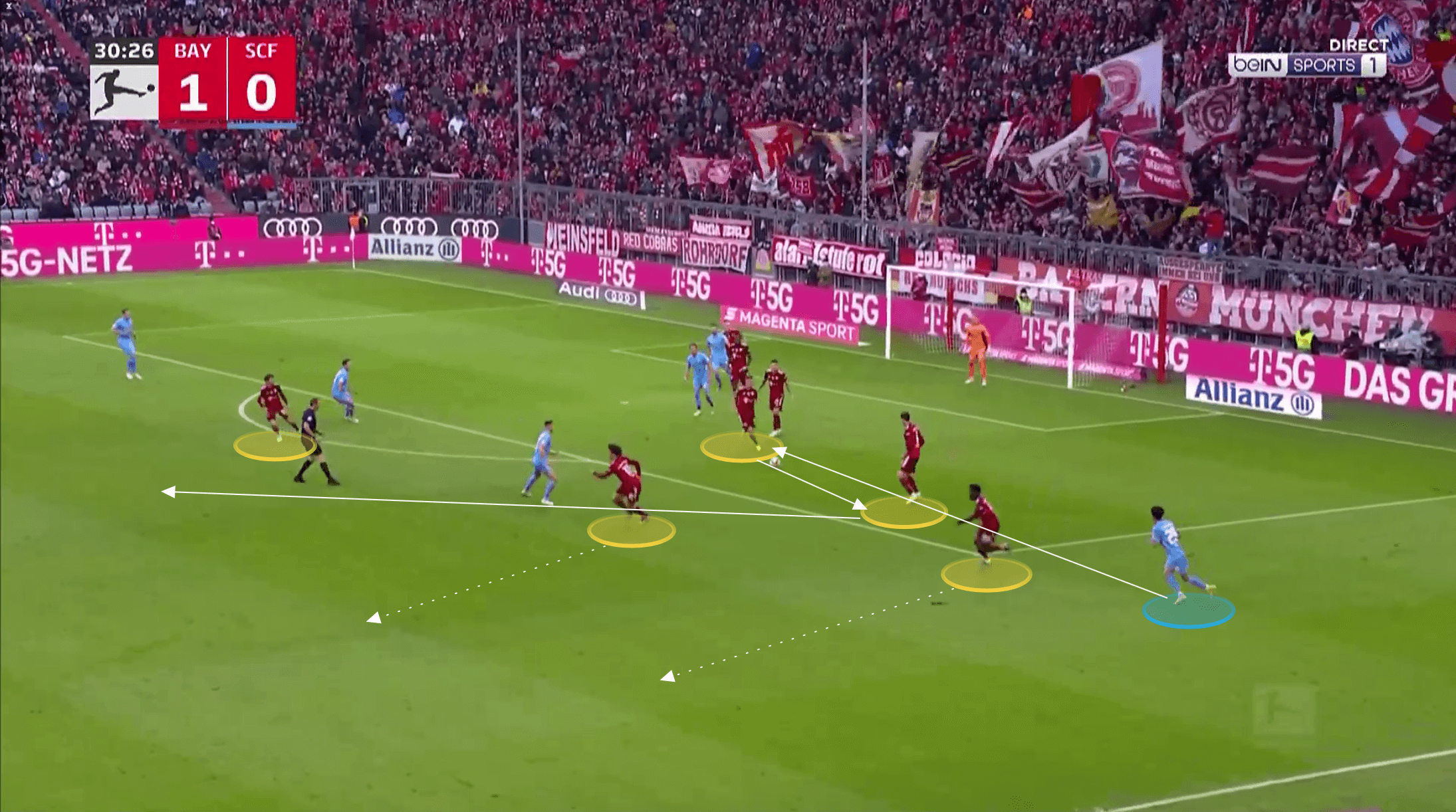 Bayern didn’t allow any one player to stay on the ball too long, and give Freiburg’s counter-press and tracking runners the chance to focus their attention on one area of the pitch. Müller received the pass from the back and immediately played out wide to Davies, changing the position of the counter-attack as Freiburg looked to close him down. 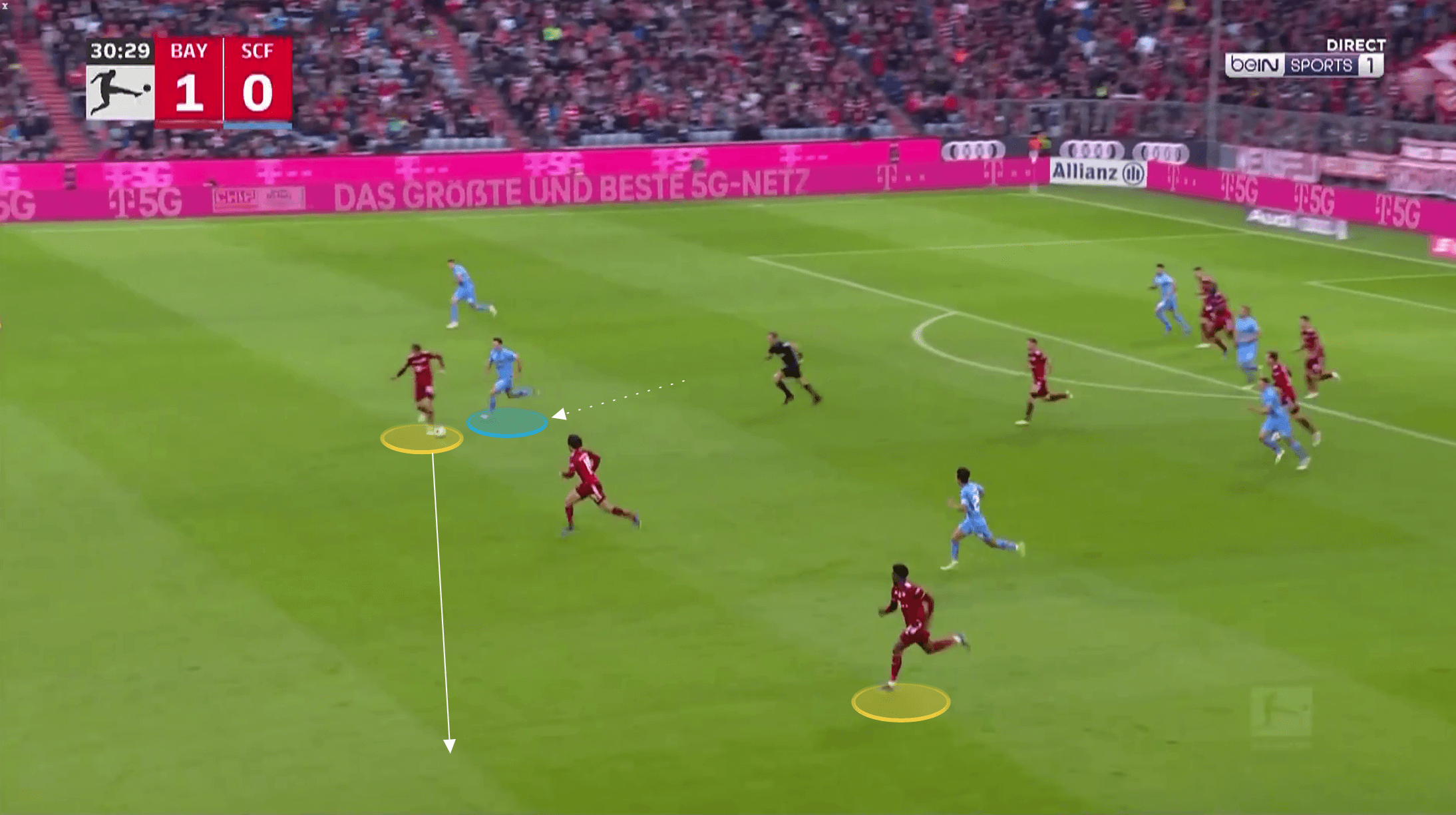 Bayern didn’t always make the quick break, of course, upon a turnover, but the intent was there and they frequently looked to see if the opportunity was on. One trigger for the quick break was the positioning of Freiburg’s wing-backs. If both were high in the moment of transition, they would look to break and test the positioning of Freiburg’s back three.

In the image below, Süle gains the ball in transition and immediately drives forward before playing the ball out wide to Coman. 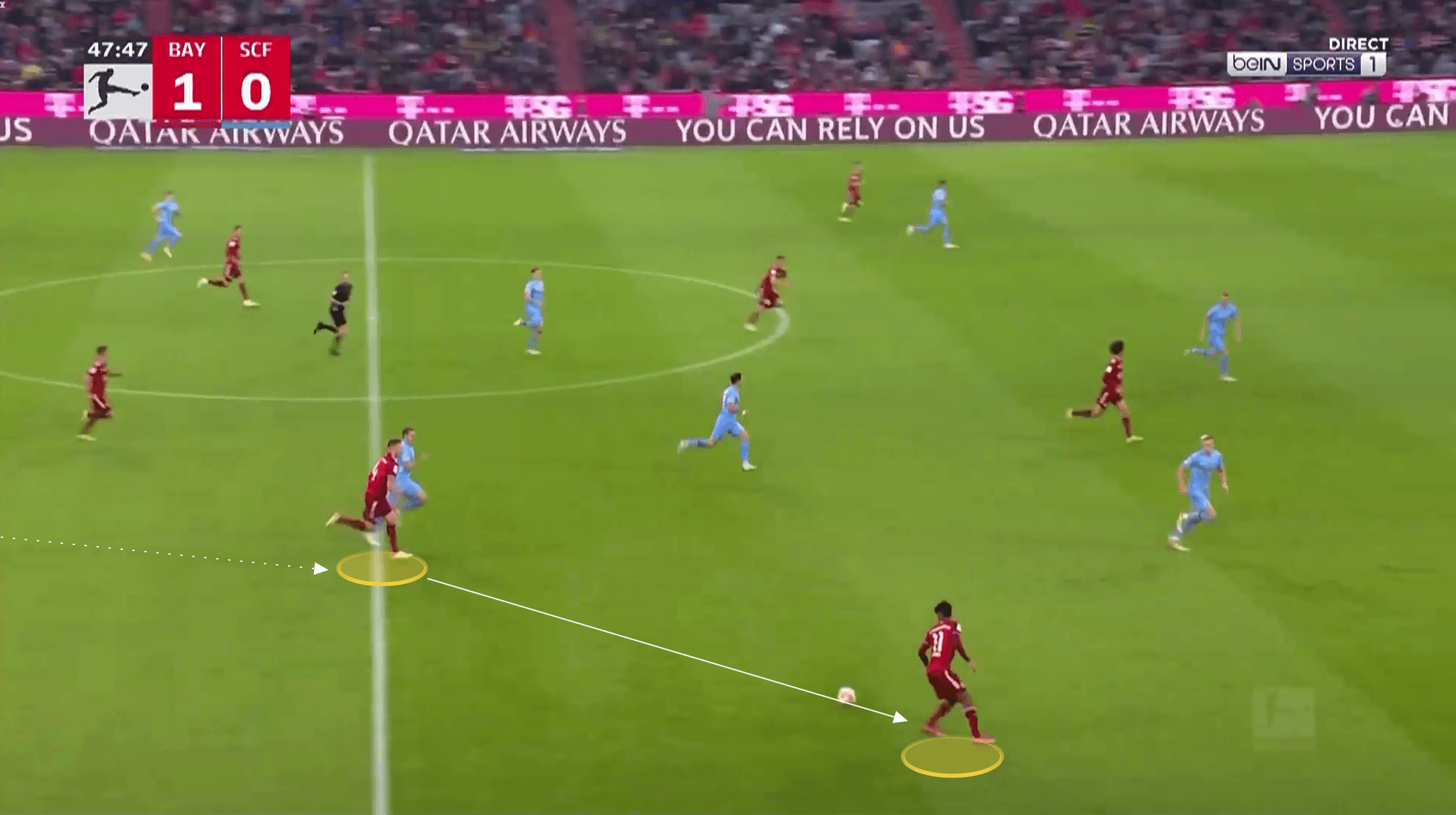 Coman then sees the huge gap in between Gulde and Lienhart in Freiburg’s backline and hits it with the lofted through pass in between the two defenders. Bayern were aggressive in pushing players forward in this moment and looked to quickly outnumber Freiburg’s defence in particular areas of the pitch with two of their attackers doubling up on Gulde here. We can even see how Süle continued his run after making the pass, under-lapping Coman. 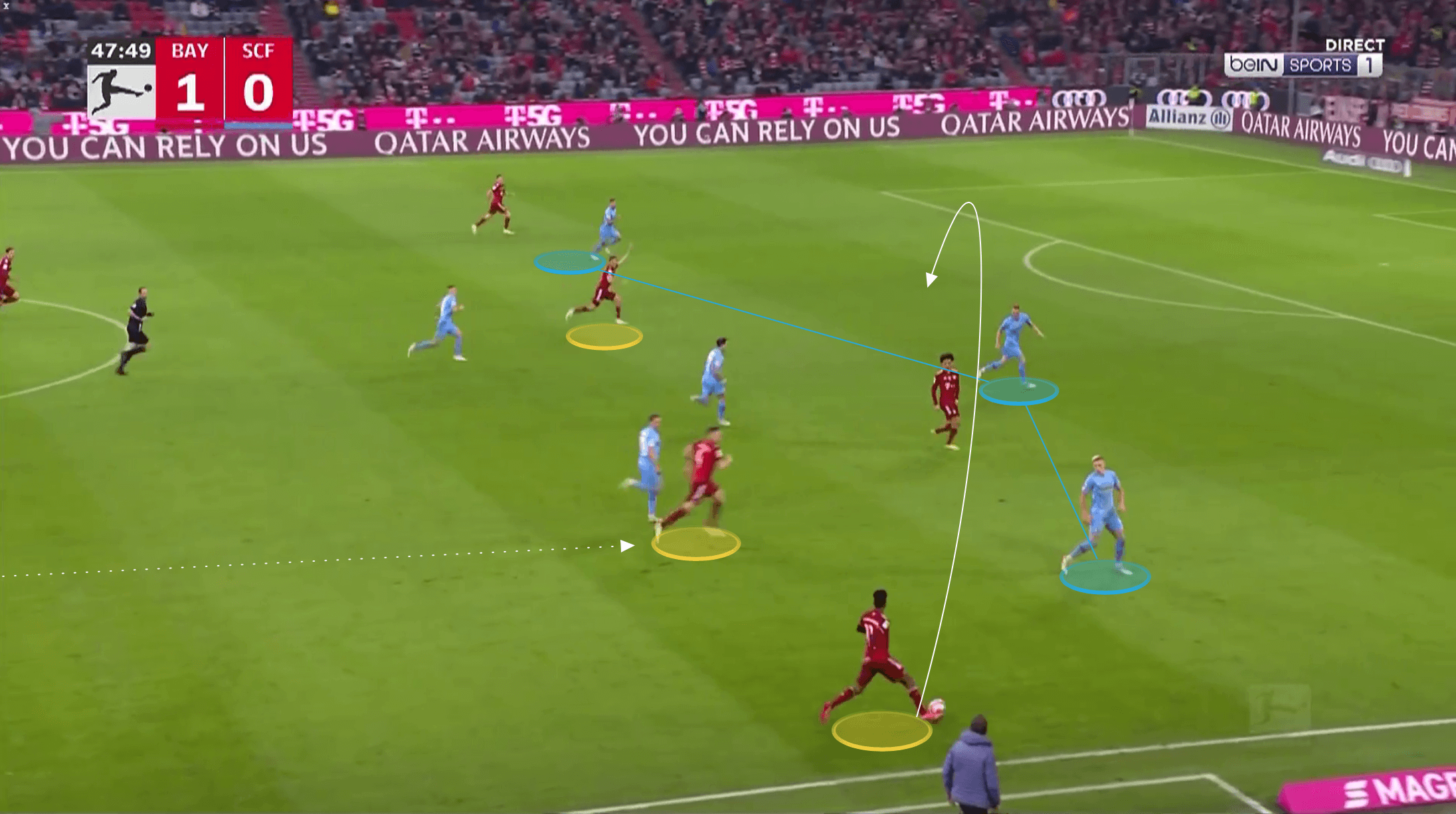 Freiburg managed 12 shots, with only three hitting the target. What seems like a high number of shots doesn’t necessarily mean there were good chances. Their 0.93xG would back that up, with most of Freiburg’s efforts coming from half-chances.

They forged a good number of these efforts by consistently being the first to any loose balls around the area.

Freiburg knew Bayern would be a difficult team to break down, so any long ball that was played forward would be met with a supporting cast of Freiburg players looking to latch onto the knockdown before Bayern’s midfield could sweep it up.

Freiburg could have gone 1-0 early in the first half with Höler recognising where the loose ball as going to land before anyone else, stealing inside Süle at right-back and latching onto the knock-down before squandering the 1v1 opportunity. 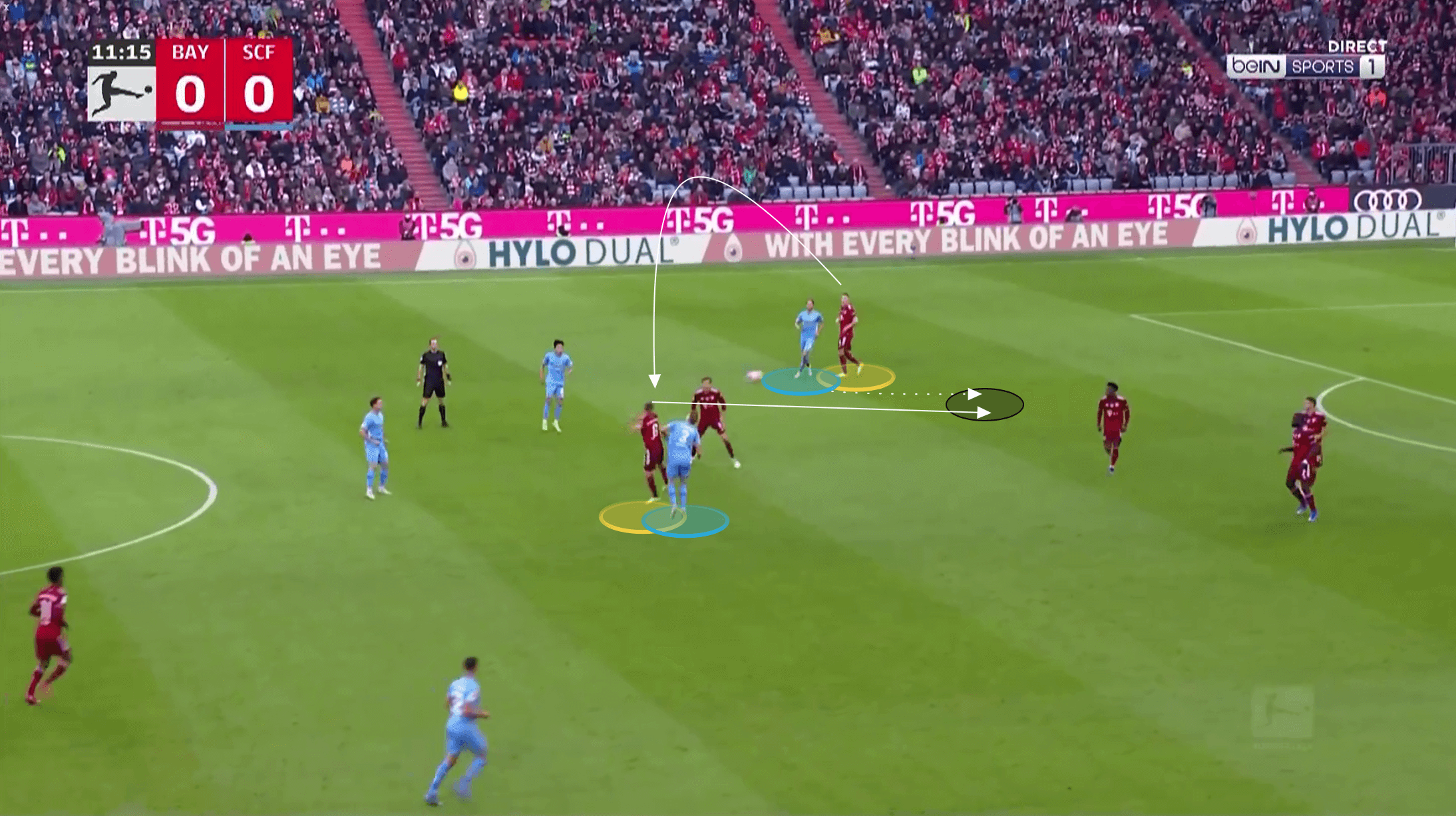 Again, just over 10 minutes later, they managed to get another chance from a similar opportunity. The long ball forward forced an awkward headed clearance from Hernández towards the edge of Bayern’s 18 yard box. We can see how Freiburg’s players behind Yeong-Jeong were all directing their runs into a more narrow position, gambling on where the knock-down was likely to land. 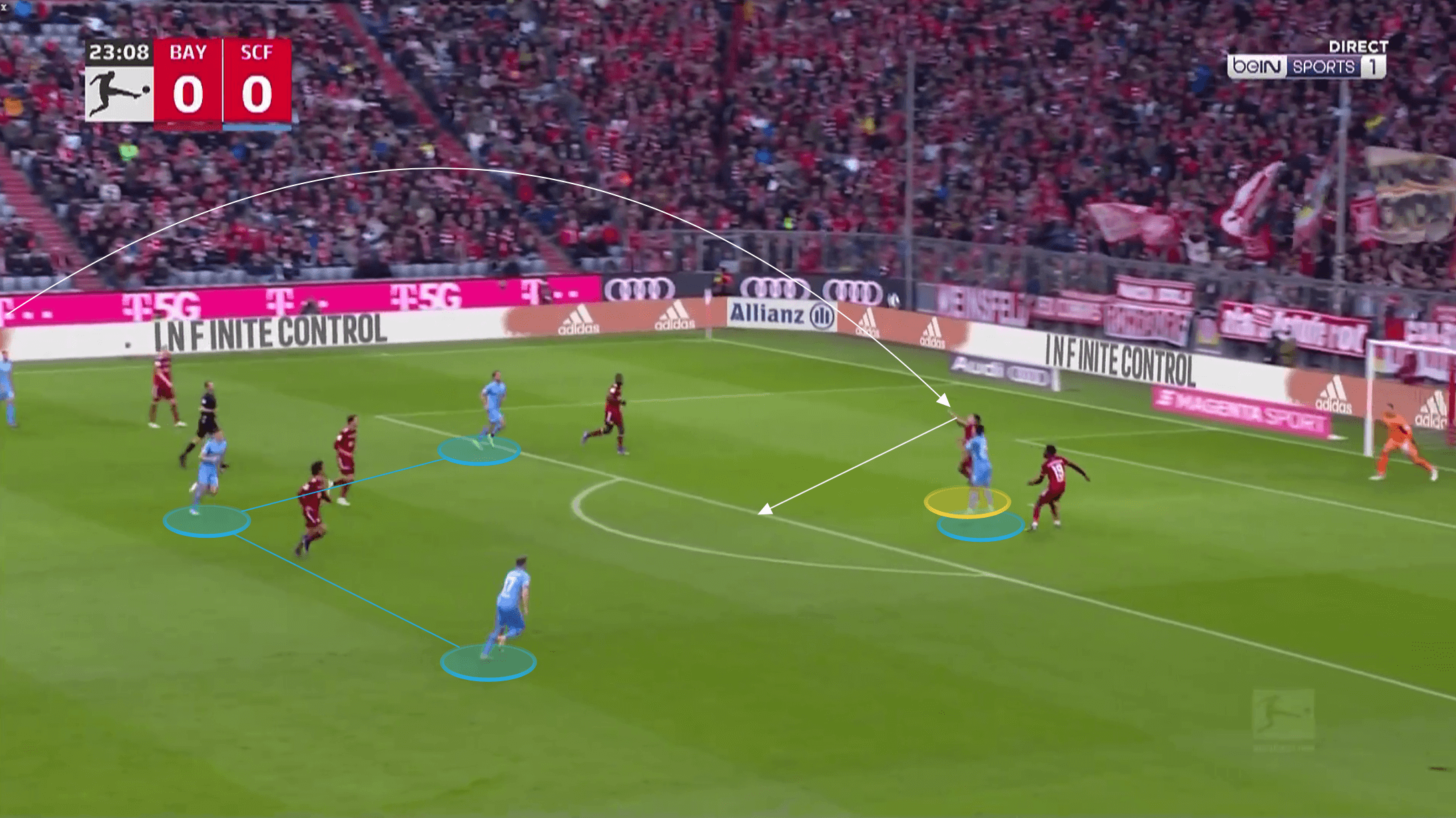 This time it was Eggestein who met the knock-down, but he couldn’t capitalise on the opportunity, with Freiburg once again failing to hit the target from this chance. 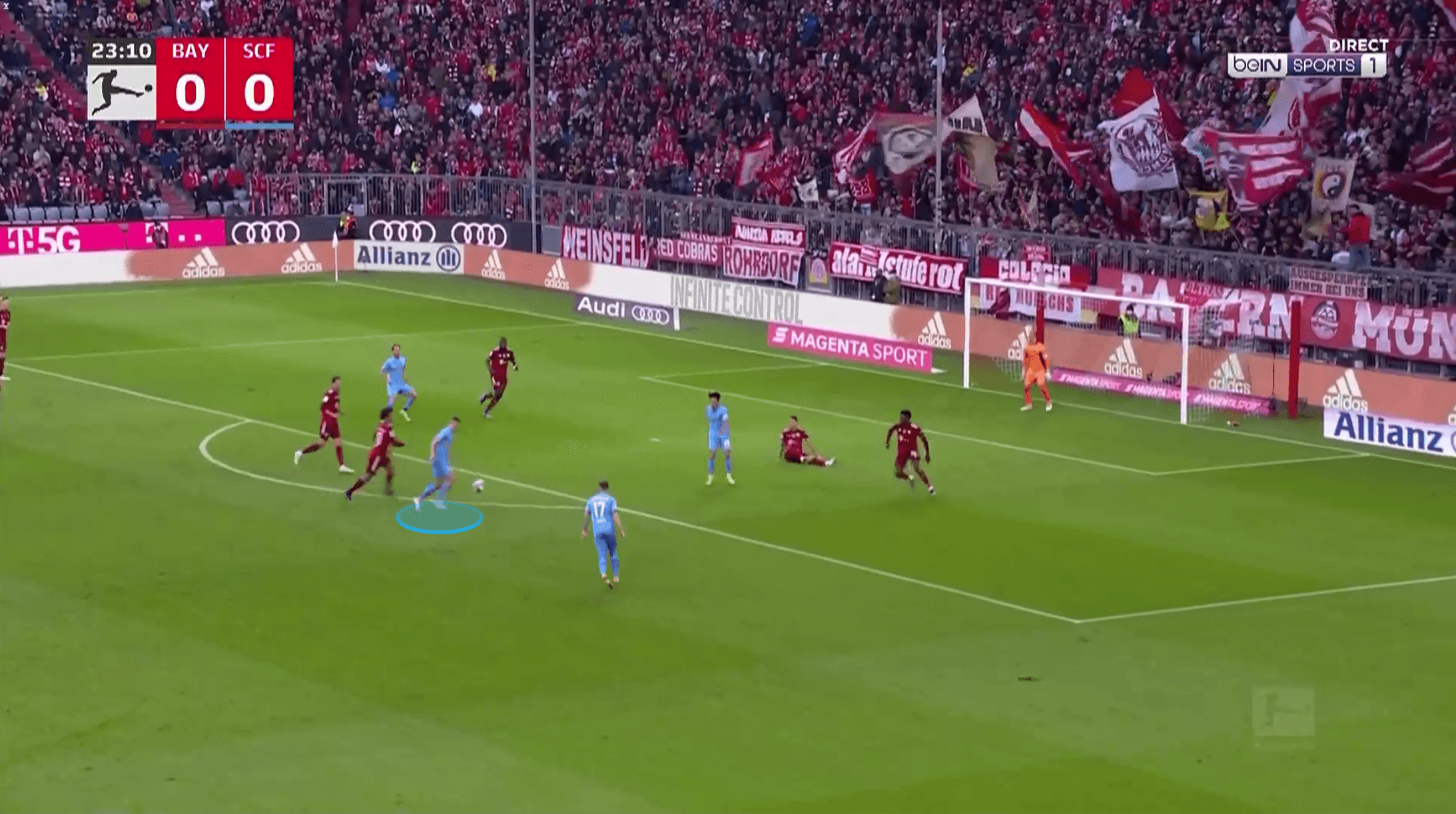 They didn’t just have awareness of this on long balls forward, but Freiburg’s midfield looked to sweep up any clearances or blocks made from shots or crosses too.

After an excellent passage of passing football from Freiburg led to a cross into the area from Grifo, which was met by a poor clearance from Bayern’s defence, Freiburg had another chance from distance. Their midfield was positioned to sweep up these underhit clearances, with Höfler highlighted this time, anticipating the ball’s pathway. Höfler controlled before shooting, missing the front post by a whisker. 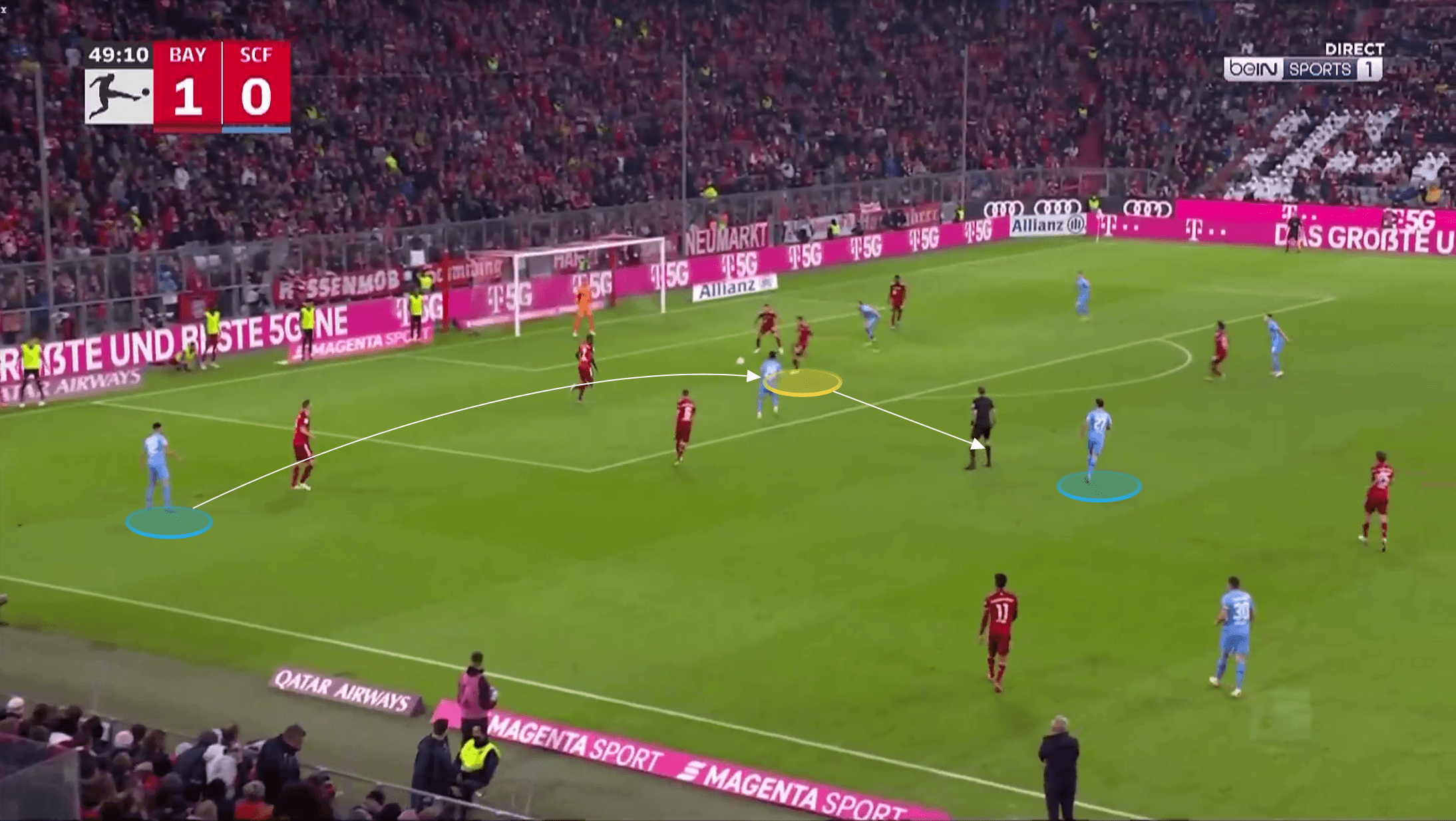 Bayern were good value for their win, and if anything Freiburg were fortunate the score was only 2-1. They were able to get at this Freiburg side in a way that no one else has done so this season, using outstanding positional play and fast-paced attacks to take a two-pronged approach to breaking them down. Freiburg were resilient, and though they had less possession and though they had to result to some rather basic counter-pressing tactics to get shooting opportunities, they still played some excellent football at times. And they still managed to get a high number of shots on goal with 12. Only Borussia Monchengladbach have managed to get more shots away against Bayern this season, and only Gladbach have managed to register a higher xG against Nagelsmann’s side in all competitions too.