Following the departure of Natasha Dowie at the end of last season, Milan Women found themselves relying solely on Valentina Giacinti as a striker while alternating between her and the other new signing, Nina Stapelfeldt. That’s why it was fundamental to sign a new striker, create more internal challenges between the players, and most of all, have plenty of options to choose from according to matches. Another reason for making this transfer is related to the whole team’s attacking performances. Milan’s attacking efficiency deteriorated when comparing it to the two previous seasons. The team failed in qualifying to the UEFA Women’s Champions League group stage mainly because they were not able to score goals. The same applies for the team’s performances in Serie A Women but with a lesser impact since Milan were able to win most of their matches. Yet, they did not convince in terms of finishing and playmaking.

The arrival Rimantė Jonušaitė is surely not going to solve all the team’s issues but it is going to be an important step towards improving the team’s attacking performances in the near future. Moreover, playing and training with a player like Giacinti will surely help Jonušaitė get familiar with Serie A, learn a lot of things about Italian football and most of all, develop and improve as a striker.

This tactical analysis will therefore help in presenting Jonušaitė, her characteristics, strengths, weaknesses and aspects to work on in terms of tactics. The analysis will also include glimpses of what she can do in front of the goal in order to identify her finishing abilities as well as her reactions in difficult situations. This will then show if Jonušaitė is ready to play immediately and participate actively in big matches against teams like Juventus, Roma, Inter and Sassuolo or she will need more time to adapt to the Italian playing style.

Jonušaitė is an 18-year-old natural striker who plays mainly in that position. She is a Lithuanian international player who used to play for Gintra Universitetas before joining the Rossoneri. What distinguishes her from the other strikers is her physical abilities and most of all, her ability to use both feet with almost the same efficiency. This helps strikers a lot especially when receiving the ball in difficult situations. Strikers usually receive the ball under heavy marking, and being able to exchange between using the right foot and the left one depending on the situation is surely an advantage. It creates confusion among markers and helps the striker in getting some much-needed space. 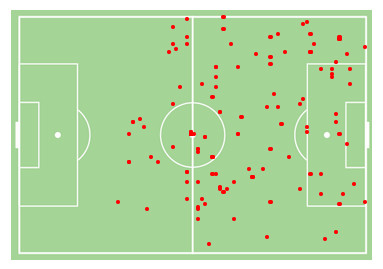 As you can see in this picture, Jonušaitė is not a static striker. She moves a lot when the team is in possession and especially when out of possession. This started to become fundamental in today’s football as strikers contribute a lot in the defensive phase and exchange roles with midfielders in the attacking phase. It is true that Jonušaitė will need some time to show her abilities at Milan, yet what she did for Gintra and at the Lithuanian national team is already encouraging. However, Maurizio Ganz will need to work with her individually during this initial period in order to improve her passing and finishing abilities even further to make them suit the level of Serie A, knowing the gap between the Lithuanian and the Italian leagues.

Jonušaitė scored six goals in eleven matches in 2021 and that’s an impressive number for an 18-year-old player. Nevertheless, she will need to make an extra effort to keep or improve these statistics in Italy given that teams are a bit more aggressive in duels in Serie A, that’s why we suggested individual training to familiarise the player with this different playing style. Also, playing with Milan defenders will help a lot in this regard as they are also strong in duels. In front of the goal, Jonušaitė is usually focused and knows where to strike the ball even when she doesn’t have plenty of time or when she is disturbed by defenders or goalkeepers. This was noticed on several occasions but the one that shows it clearly is the following. 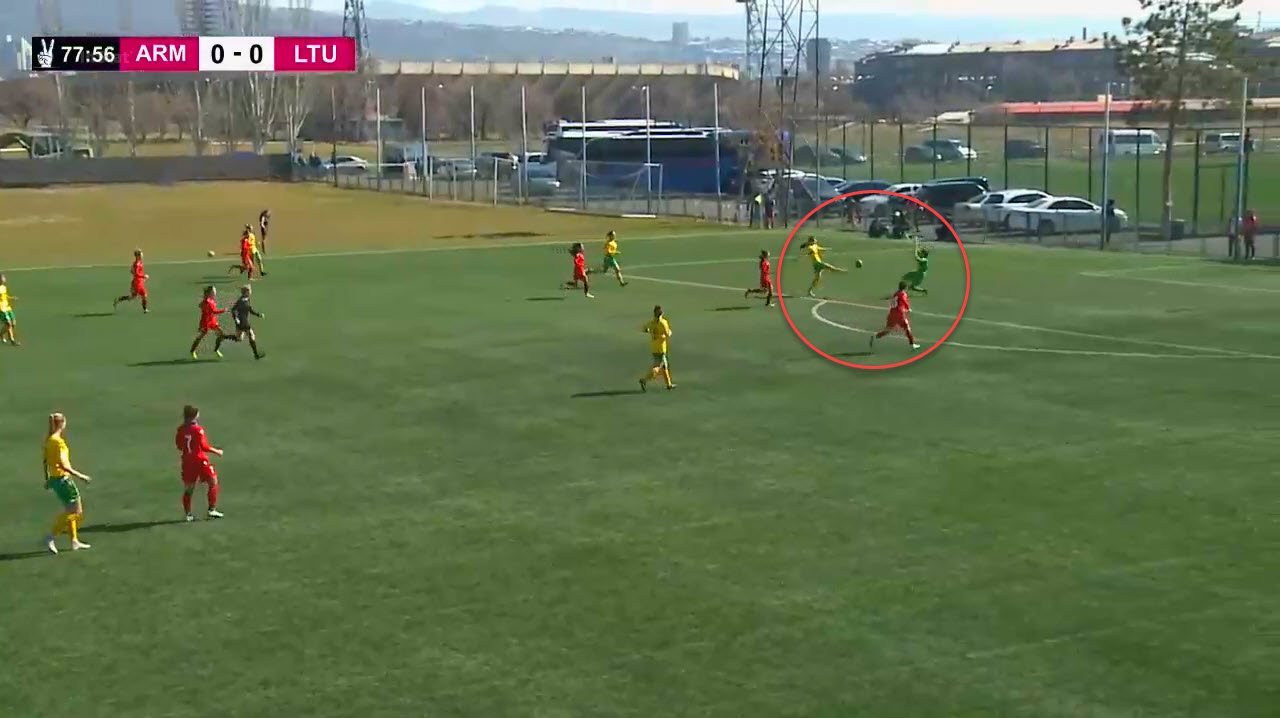 This goal against Armenia was scored with cold blood by Jonušaitė because as soon as she saw the goalkeeper going out for the ball, she did her best to just touch the ball away from the goalkeeper to then continue the action and put it inside the net after completely excluding the goalkeeper with just one touch. Such goals are fundamental for confidence and especially for experience. Scoring different types of goals and dealing with various situations will surely impact the time of reaction as well as decision-making positively.

Along with the type of finishing, Jonušaitė can score with her weaker foot too and what is important is that she does it without panicking or getting confused. In this action for example she controls the ball, selects an angle and shoots without showing any signs of stress or hesitancy. And for strikers, this psychological aspect is very important especially in these one-on-one situations with goalkeepers. 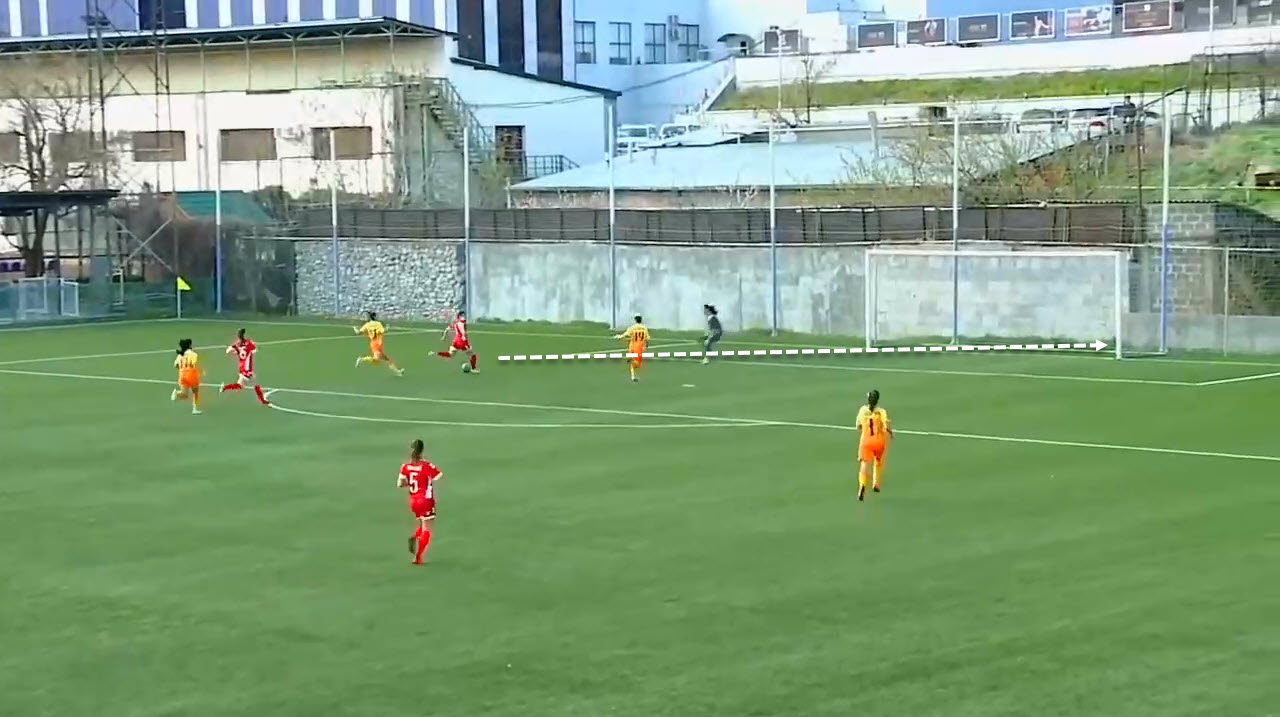 Jonušaitė can also use her header effectively and wins aerial duels quite frequently. The good thing is that she doesn’t fear attempting headers from long distances and she gets rewarded for taking that risk. Like you can see in this goal action, she received a cross from the left-wing while she was marked but she was successful in touching the ball and scoring it with a beautiful header after she saw that the goalkeeper was advancing. The experience gained by scoring this type of difficult goal will help the player a lot in her development and in her games in Serie A. 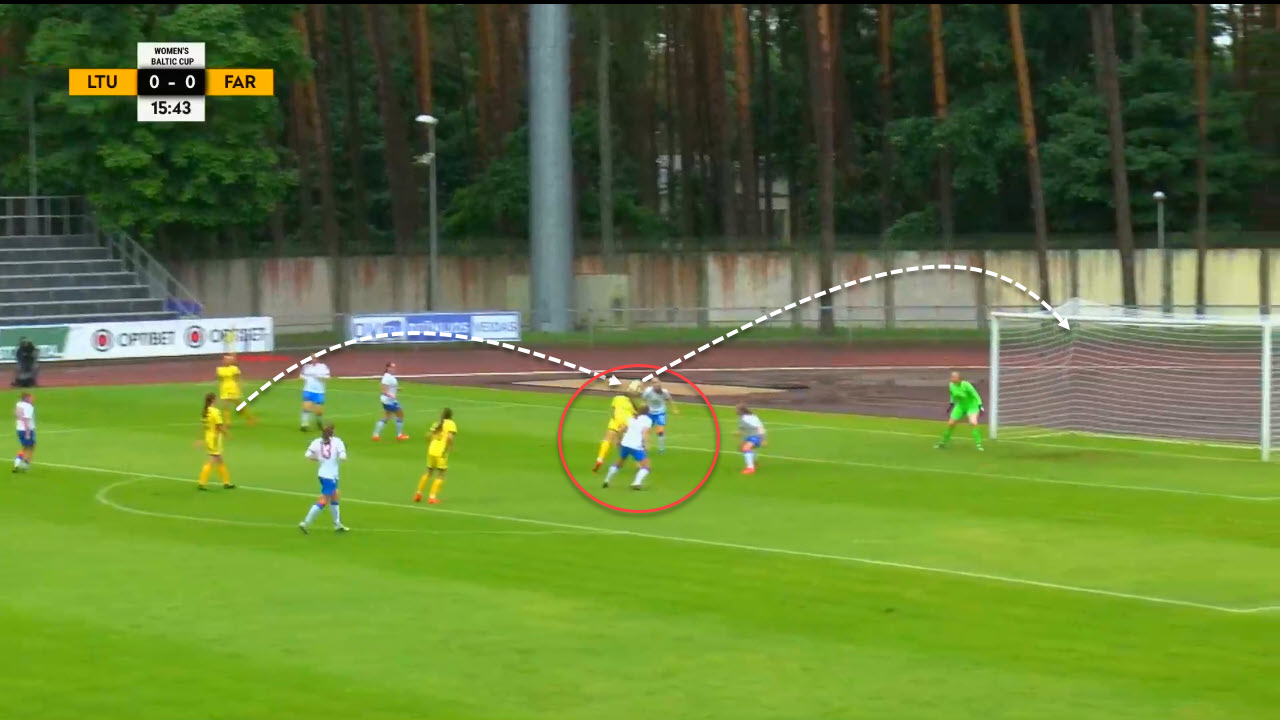 For passing, Jonušaitė will need to work a bit more on the quality and precision of her passes in order to be more decisive and contribute to her team’s attacking performances through not only goals but also assists. What is encouraging is that Jonušaitė already reads the game very well and has a great vision. However, her passing choices and especially the intensity of her passing is what needs more work.

For instance, she made the right decision in this counter-attack by passing to her unmarked teammate, however, the pass was too slow and allowed the defenders to gain some time and disturb the player. 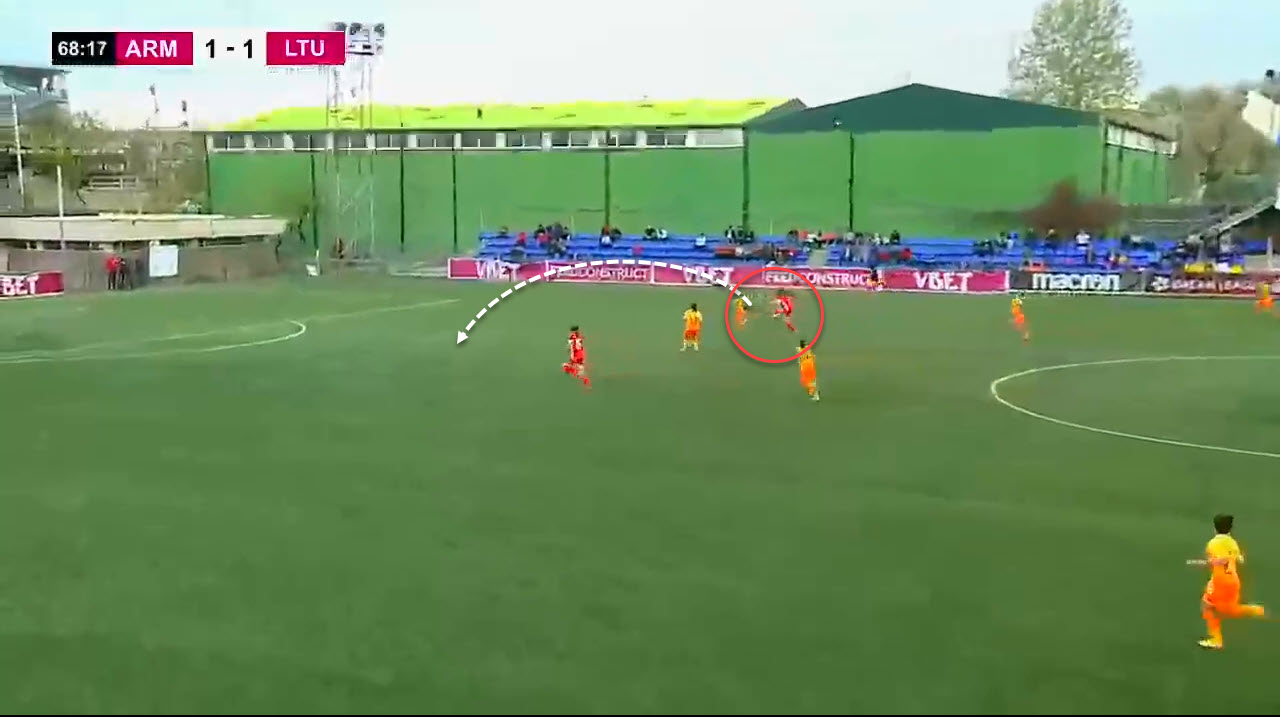 Pressing and off the ball movement

In terms of pressing, Jonušaitė is excellent because she chooses her times of pressing perfectly and usually gets what she wants when she presses. This happens frequently thanks mainly to the player’s strong physicality as well as her ability to read the game and anticipate the defenders’ actions. She was able to intercept the ball at delicate times and in dangerous positions, and if she succeeds to apply these pressing attempts in Italy, she would get plenty of scoring chances. 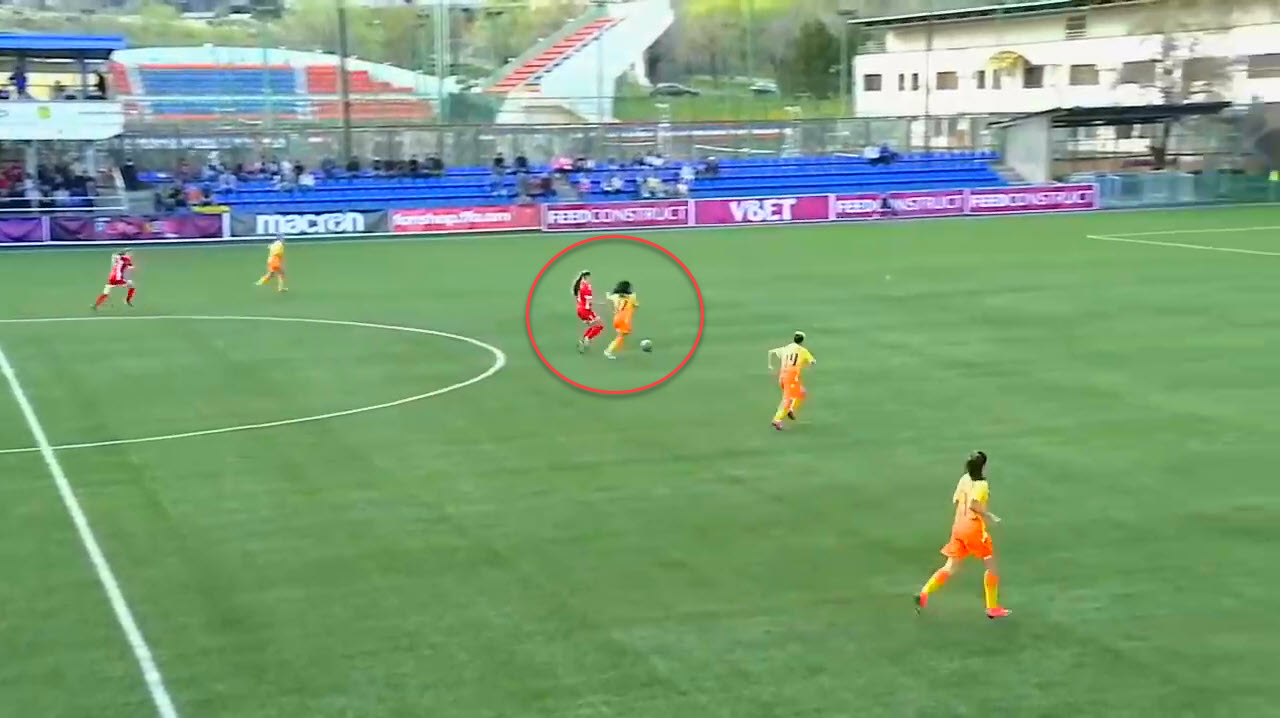 In this example, she was running near the defender and as soon as she saw the latter a bit hesitant and not knowing what to do exactly with the ball, she accelerated and put her body in front of the defender, intercepted the ball and won the duel. Then, she continued the action and scored a goal since that was the last defender. Almost a very similar action occurred in a different match after Jonušaitė spotted a hesitant defender who was not aware of the close distance between her and Jonušaitė. The latter therefore anticipated the defender’s movement and intercepted the ball using her physical abilities and launched a very dangerous counter-attack. 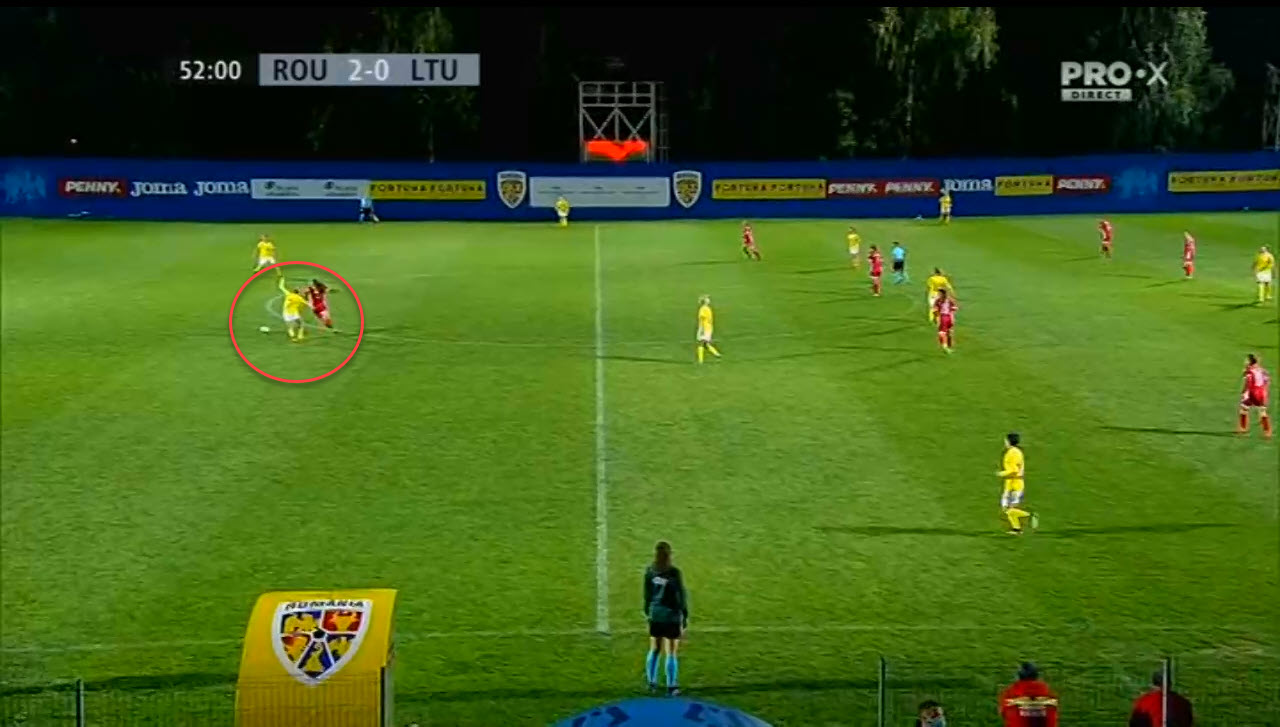 Jonušaitė is definitely a useful signing for Milan Women who are in urgent need of good attacking players in this period. But we should have patience before judging Jonušaitė’s performances because she is coming from a different league with a different mentality and at a young age. Therefore, she will surely be a very useful player to the team after some time at the club, of course, if used in the right way.