Premier League 2021/22: A look at the great defensive displays of Everton and Tottenham in Conte’s first game – tactical analysis

Before the international break, Tottenham visited Goodison Park to combat Everton on Sunday. This was Antonio Conte’s first Premier League game as the manager of Tottenham, which ended up in a 0-0 draw after 90 minutes. After sacking Nuno Espírito Santo, the guests needed a clear direction and principles for the players. This tactical analysis will show the arrangements of Conte.

Meanwhile, Everton had a great start this season but dipped recently. Rafael Benítez’s men regrouped as they only had one win in the recent six games. They were quite good defensively but lacking the quality to penetrate in the offensive third.

Benítez played his team in a 4-1-4-1 formation with some updates on the player positions. Andros Townsend moved into the centre and partnered with Allan, with Fabian Delph covering them as the holding midfielder. Anthony Gordon started as the right-winger as the Spanish coach wanted Demarai Gray to operate on the left side.

Conte fancied a 3-4-2-1 formation, which was slightly different from the 3-1-4-2 he preferred at Inter. Harry Kane started as the lone striker with Heung-Min Son and Lucas Moura supporting, Pierre-Emile Højbjerg paired up with Oliver Skipp in the centre of the midfield, and they had Sergio Reguilón back as the left wing-back.

Conte had a great plan for Tottenham, by keeping Moura and Son narrowly as the attacking midfielders, they had four players in the midfield, resulting in a 4v3 numerical superiority centrally. However, their tactical approach was also constrained by Everton’s great defending, as Benítez’s men were very disciplined out of possession. This part of the analysis explains how the tactics of both managers interacted and dialogued with each other. 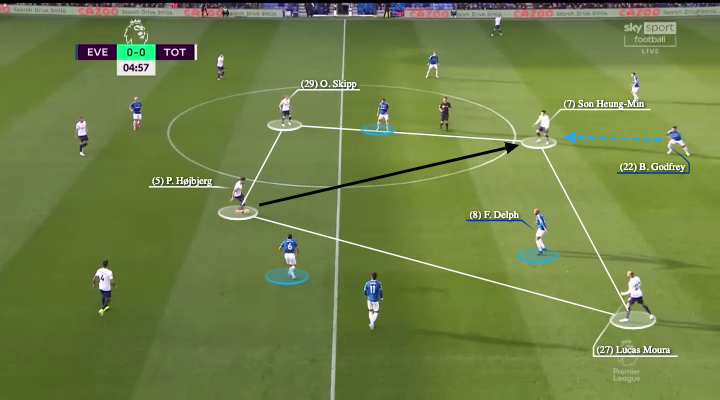 The first image shows the 4v3 numerical superiority of Tottenham in the centre, this is the concept and the basis of the offensive structure. The shape should be regarded as an asymmetrical 3-4-2-1, we would give more explanations on wing-backs roles later.

With this shape, they had two deep midfielders (Højbjerg & Skipp) to drag the two Everton midfielders high, then, with Delph was isolated in the centre in a 1v2. The former Manchester City man could only occupy one of the half-spaces, such as covering Moura above. Then, Son was free in another vertical zone. Hence, in those situations, Everton must shut those spaces by centre-backs stepping up, but then the channels were opened, and spaces were exposed behind. 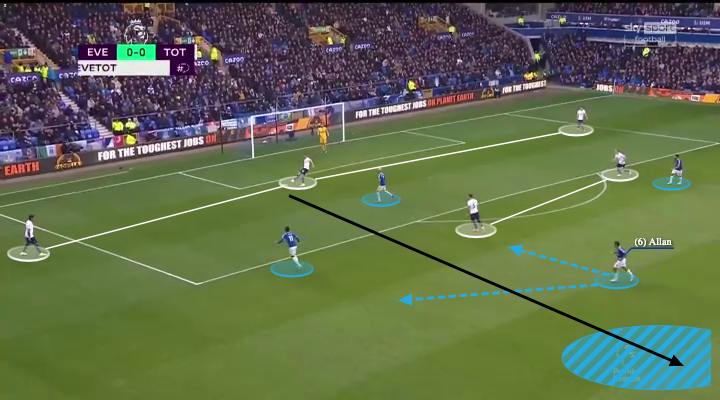 Tottenham played with a 3-2 build-up shape in their own third, but the problem was their limited abilities to go into spaces inside. Although there was a 4v3 in the midfield, the supporting distances were usually too large, and the passing distances were too long so Everton players could see and adjust positions. For example, even the Eric Dier could play vertically into the blue zone, Delph had enough time to read and shut that space.

But Everton were also a tough side defensively with well-drilled tactics. In the high pressing, they also use a 4-1-4-1 shape to block the central zones, inviting the oppositions to go wide. With Allan and Townsend to mark the two midfielders, Tottenham could not break the first line. Also, they had narrow wingers to occupy the half-spaces channel, so they lured the oppositions to the wide spaces. 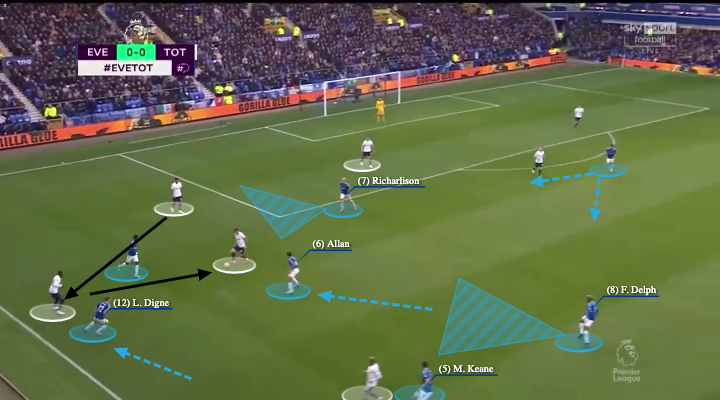 Then, you could see how well Everton closed the wide spaces from the image above. Tottenham moved the ball from Dier to Cristian Romero, then all the way to Emerson Royal. But they could not continue playing short passes, as the hosts committed many players to overload that region, limiting the spaces to play. When Emerson found Højbjerg, the Danish midfielder could only kick the ball long away.

Everton had a compact structure to restrict these wide spaces. Firstly, they had Richarlison to cut the return passing lane to Romero. Then, as Gray was in the centre initially, Lucas Digne came up early to press Emerson. As Moura then appeared to exploit spaces behind the left-back, Michael Keane followed tightly to close him. While Allan was pressing Højbjerg, he had Delph covering him at the back, even the Brazilian midfielder was dribbled past, the danger should be limited.

Another detail that Everton did well was to maintain compactness with the far side winger, as Gordon positioned himself around the other deep midfielder. 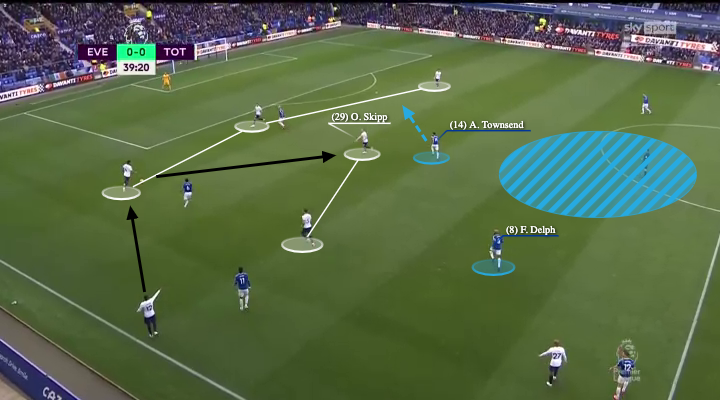 But Townsend, as the advanced midfielder of Everton, might be the point to break the block as he sometimes went for a suboptimal option in a high block. Here, Tottenham circulated through Emerson to Romero, then to Skipp. The way Benítez’s men defended was so similar to the previous example, but the shape was a bit loose with more spaces to play.

The issue was Townsend’s defensive decision. He abandoned marking Skipp too early and went for Ben Davies, but the shift of marking target was too early, which allowed Skipp to receive and break into the blue zone. The blue zone existed as Delph was dragged to the left half-spaces by Højbjerg and Moura, so the other central zones were exposed. 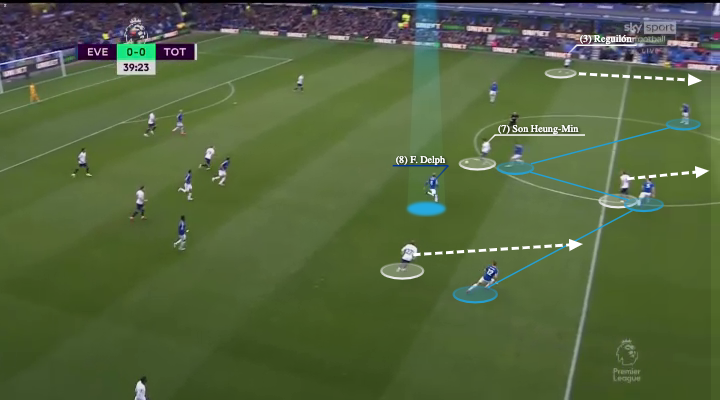 As explained, the strategy of Tottenham was to exploit the free zones where Delph could not cover. Son was the player to receive in that space, and so Ben Godfrey must follow to close him. In that instance, the last line of Everton was imbalanced, so Kane had a 1v1 against Keane and channels were large. The others, such as Moura, should also make runs behind to seize the momentum and attack the disorganized Everton shape.

And that’s why Conte needed his wing-backs to operate asymmetrically. The ball side wing-back should always drop back a little bit to help the centre-back, offering a short option, but the ball far wing-back (Reguilón here) must always stay higher and be ready to go. When Tottenham broke lines and reached spaces behind the midfield, the wing-back could fly high on the pitch and stretch the backline. 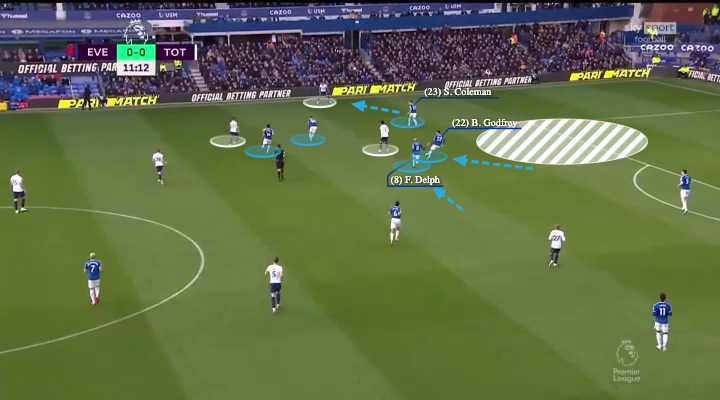 Even in the lower block of Everton, you could spot very similar defensive principles such as the wide overload, pressing & cover, and how they narrowed spaces down on the flank. They had the five-man group to close wide spaces (5v3 numerical superiority), Séamus Coleman stepping out to press the wing-back, then, the centre-back (Godfrey) came out to close Son. Also, Delph moved from the centre to provide the defensive cover, the former City man was gradually picking up his form. He impressed by giving six interceptions in only an hour, which was the joint first in the team.

But you could also notice the same white spaces left behind Godfrey, it was massive and if Tottenham could play through it, the condition to create final passes would be more favourable to trigger something promising. Tottenham were missing that sort of penetration runs to go behind, and they were lacking real threat in the final third because of that.

Last month, I also wrote an analysis about Benítez’s defensive principles and how they were applied under Everton’s context.

Since Everton were a more direct team in possession, they did not pose complex positional problems to Tottenham. But still, under Conte, we observed there were some positives from their defending, and expected them to carry on after the international break. 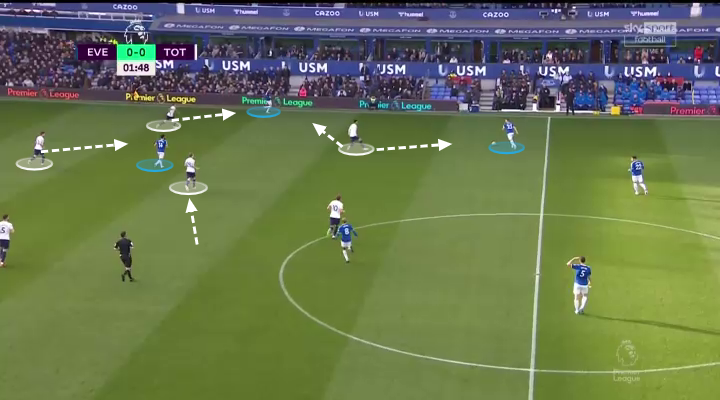 Tottenham had a similar situation to their oppositions as they spent most of their time defending the wide spaces. Everton opted for passes to the wide players, going around the block instead of taking the risks centrally to control the defensive transitions.

The first image of the section shows the improvements in their wide pressing. When Son spotted the direction of the forward pass, he did not rush out to isolate himself from teammates. Instead, he stayed to maintain a 4v2 numerical superiority for his side. Then, when Reguilón anticipated Gordon was the receiver out wide, he stepped up to press on his back foot. The key was to press in the simultaneous moment to close space, as Davies and Skipp must see the left wing-back’s action and shift onto the remaining free option.

With these clearer instructions in the wide pressing, Tottenham should be able to win the ball back more often and triggering more counter-attack opportunities. 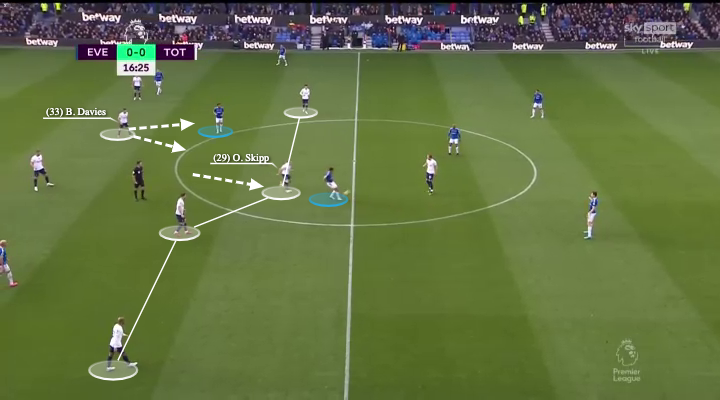 In the midblock, the attacking midfielders moved a bit wider to drop as a 5-4-1 shape. The pressure they applied in the centre was more consistently on the ball than before. Tottenham players would read the close body shape of receivers as the pressing triggers to press, and the midfielders were braver to step out of position.

In this situation above, Skipp came out to close Allan, then, the defenders must step up vertically as last line behind should be watching the midfielder’s back. So Davies came out to close Townsend, and in that situation, they closed spaces in the centre so Everton went wide.

This analysis is a quick guide to Conte and Benítez’s tactics, and since both were coaches emphasizing on the defensive solidity, they nullified the opposition threat in most parts of the game (xG 0.82-0.55). Tottenham demonstrated a better structure offensively, but the defense was not tested enough as the opponents were a bit direct. From Everton’s perspective, there were also positives to take as some players such as Delph was quite fine, and hopefully they could contribute more as the season continued.