AFCON 2021 Final: How Senegal lifted the trophy despite failing to breakdown a compact Egypt – tactical analysis

Senegal lifted the AFCON 2021’s trophy for the first time ever after beating the Egyptian national team thanks to a penalty shootout. Both teams were obliged to play for 120 minutes plus additional time before resorting to penalties since neither team was able to turn the table to their advantage in regular time. The match included several duels and impressive stories. Yet, the battle between Mohamed Salah and Sadio Mané was a particular one since it has many layers.

The match itself was a balanced one with Senegal showing more determination and ability to score when compared to their opponent while Egypt knew how to defend well and prevent Senegal’s excellent and dangerous attacking players from scoring. Another crucial factor that supports this idea is Egypt’s goalkeeper performance. In fact, Mohamed Abou Gabal was selected as the man of the match despite losing the final and that has a clear explanation. Abou Gabal saved his team on several occasions from conceding a Senegal goal during the match and during extra-time. Moreover, he was crucial during penalty shootouts despite losing as he kept the players in the course after Mohamed Abdelmonem missed a penalty.

Egypt will look back at this match with a lot of frustration but at the same time, they should be proud of their performances during the competition. They were able to face and beat some of the best teams in the continent including Morocco, Ivory Coast and the hosts, Cameroon. Also, they should exploit this match and transform their negative feelings into a positive motivation since they will be needing it very soon when they face the same team, Senegal, for the play-off match of FIFA World Cup 2022 Qualifiers.

In this tactical analysis article, the focus will be on both teams’ tactics and especially on Senegal’s lack of concretisation in the final third while shedding some light on Egypt’s defensive performance and what they should have done better in transition and in attack.

On the other side, Egypt preferred to use the 4-3-3 formation, relying on Mohamed Abou Gabal as a goalkeeper, Zamalek’s Emam Ashour as a right-back, Al Ahly’s Mohamed Abdelmonem and Zamalek’s Mahmoud Hamdy as centre-backs and Zamalek’s Ahmed Fattoh as a left-back.

The midfield was made up of Arsenal’s Mohamed Elneny, Al Ahly’s Amr El Solia and Hamdi Fathi while the attack included the Egyptian legend, Mohamed Salah, who played on the right-wing with Stuttgart‘s loanee, Omar Marmoush, being a left-winger. In front of them, Galatasaray’s striker Mostafa Mohamed did his best to disturb Senegal’s defence while being supported by both wingers. 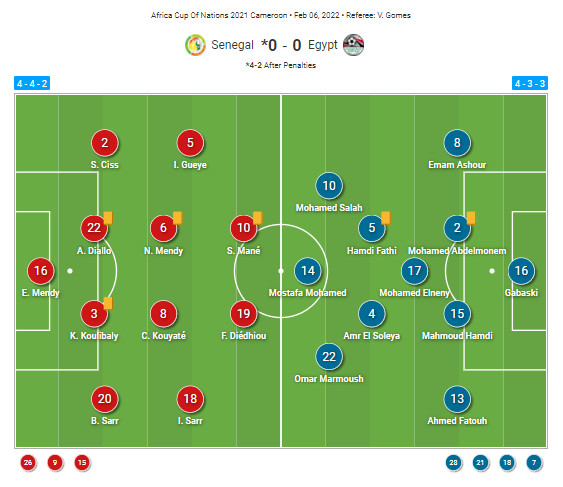 Egypt started the match badly by conceding a penalty to their opponents following a penetration from Ciss who exploited Ashour’s devastating error. In fact, Ashour tried to intercept a cross directed towards Ciss but he failed and therefore left all the space for the latter, allowing him to penetrate towards the penalty box and oblige Abdelmonem into committing a foul on him inside the box and leaving his direct opponent. Abdelmonem tried to only touch the ball with his sliding tackle, yet, he was not successful in doing so since Ciss was quicker than him, obliging him to touch his foot only. 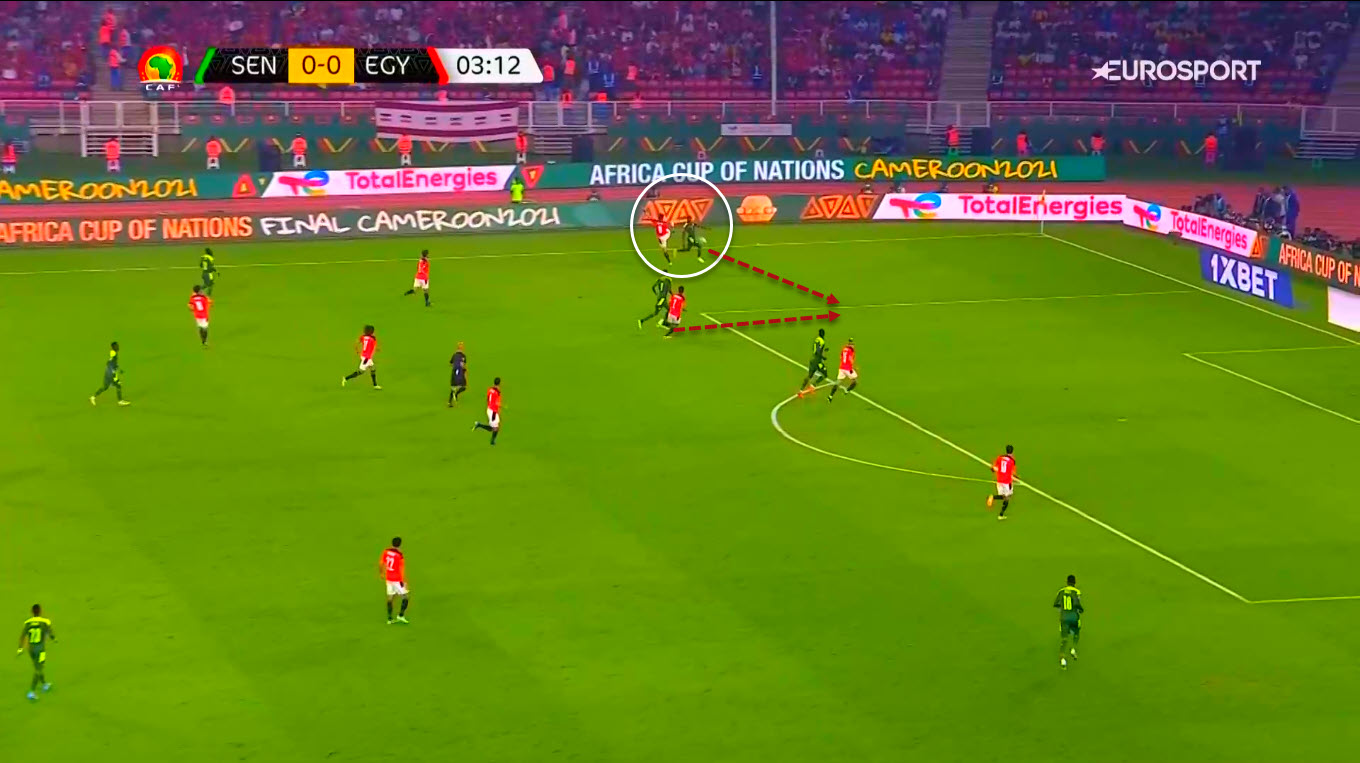 Before it becomes too late, Abou Gabal saved his team from an early bad scenario by saving Mané’s penalty miraculously and giving a boost to the whole team. Salah tried to exploit this momentum by attempting to find his way through Senegal’s defenders before shooting. However, his shot wasn’t as powerful as needed in this example. Plus, he was surrounded by a lot of defenders while he had the option of serving his teammates who were close and unmarked. 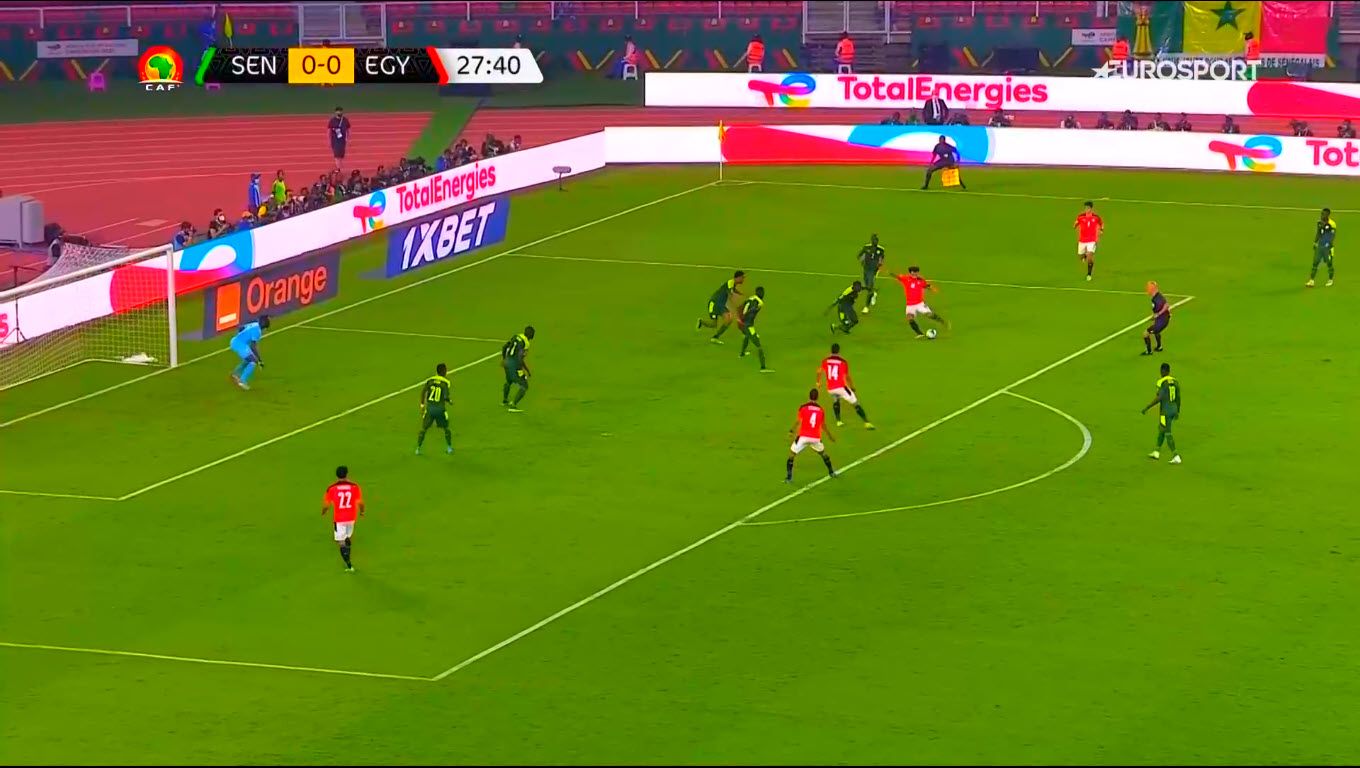 In the following opportunity, Salah was able to advance to the penalty box again and had more time to think about an effective solution. He, therefore, waited for the movement of Mostafa Mohamed in order to act like passing to him and shoot quickly to surprise the goalkeeper. Nevertheless, Mendy was successful in saving a difficult shot launched towards the near post and which could have given Egypt the advantage. 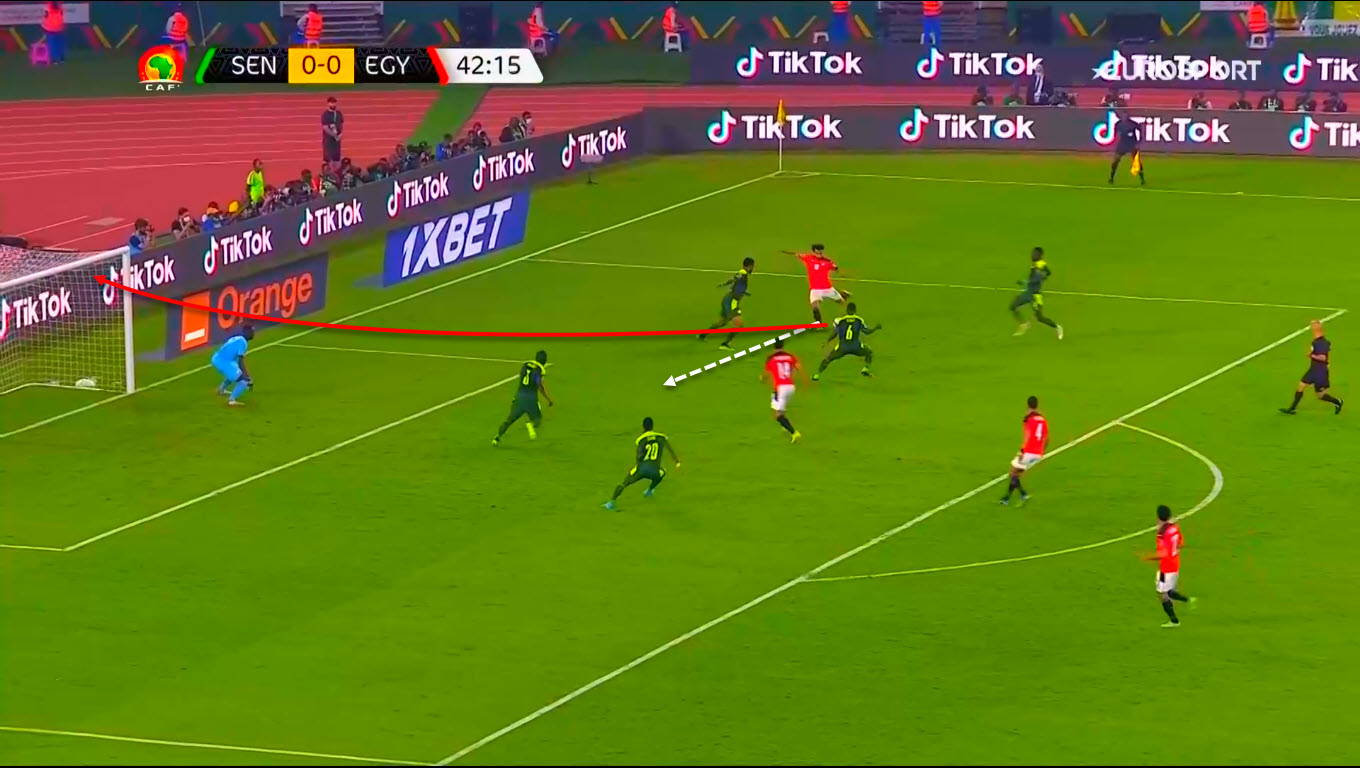 Egypt were able to shoot three times on target from seven total shots in this match, which is not really an impressive number. Yet, it sounds understandable given the quality of the team that they faced. What lacked Egypt from an attacking perspective was the ability to be crucial on some of these few occasions in order to not let their defensive efforts go in vain. For instance, the Egyptians were able to create some danger even during the 73th minute following a cross from Mostafa Mohamed to Marwan Hamdi who failed to direct his header towards the required angle despite having the time and the space to do it since he jumped to meet the ball in the air while squeezing himself between Koulibaly and Diallo, as you can see below. 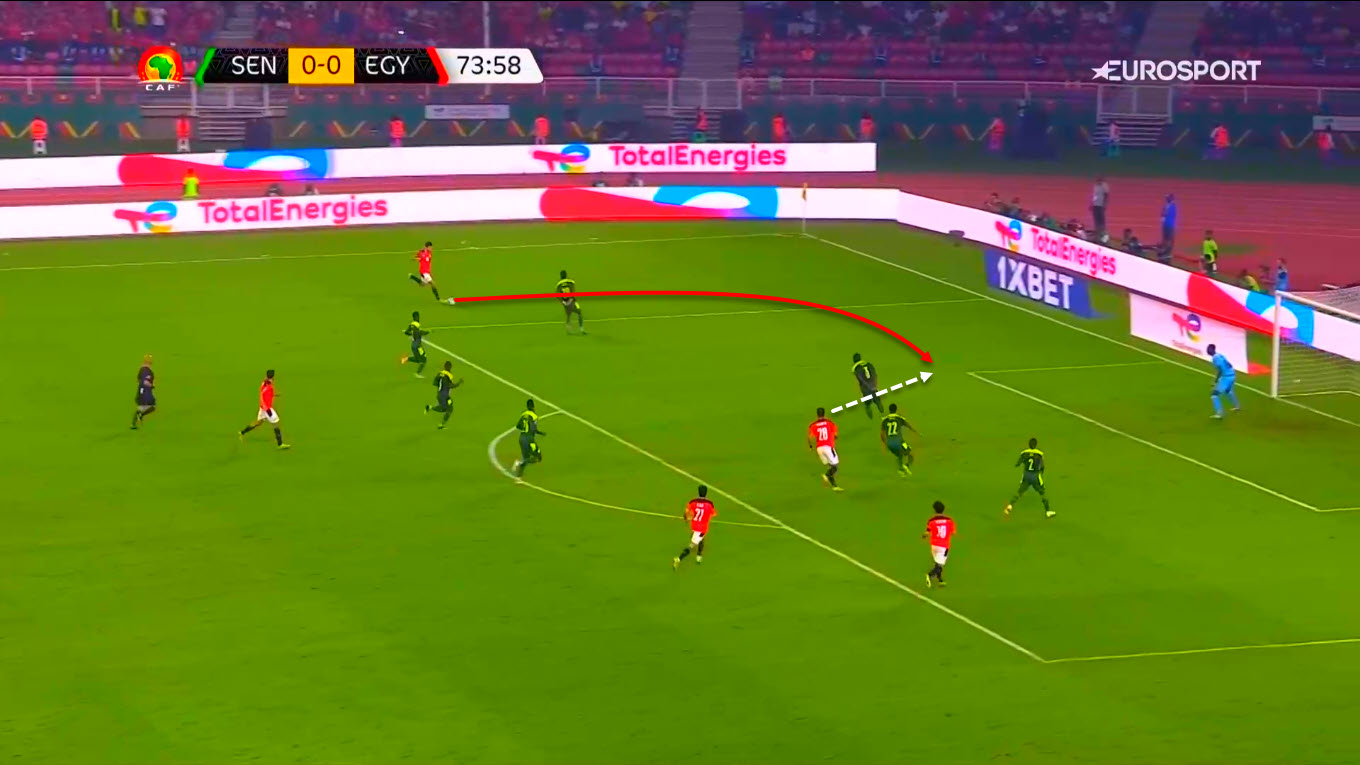 Senegal’s attacking performance were significantly better than Egypt’s one given that they threatened more, created more chances and shot more on goal. They were able to shoot 15 times with 8 shots on target, yet, their finishing was not really on point on most of these occasions. Plus, Abou Gabal’s saves made things more complicated for Senegal especially when he saved Mané’s penalty.

The Lions of Teranga could have been more efficient in front of goal but they failed to exploit Sarr and Mané’s excellent penetrations on the wings in the best possible way. It is true that these two players were successful in numerous occasions in surpassing their direct opponents, however, the final pass accuracy was the thing that lacked many of Senegal’s attacks.

Senegal players were often in a hurry during their attacks and lacked fluidity in front of goal. For instance, Gueye received a pass in a dangerous position in this example but failed to coordinate his body well in order to shoot with power. Moreover, he had a better option on the right-wing where his teammate was asking for the ball behind Egypt’s defence. However, Gueye preferred to go for the individual solution. 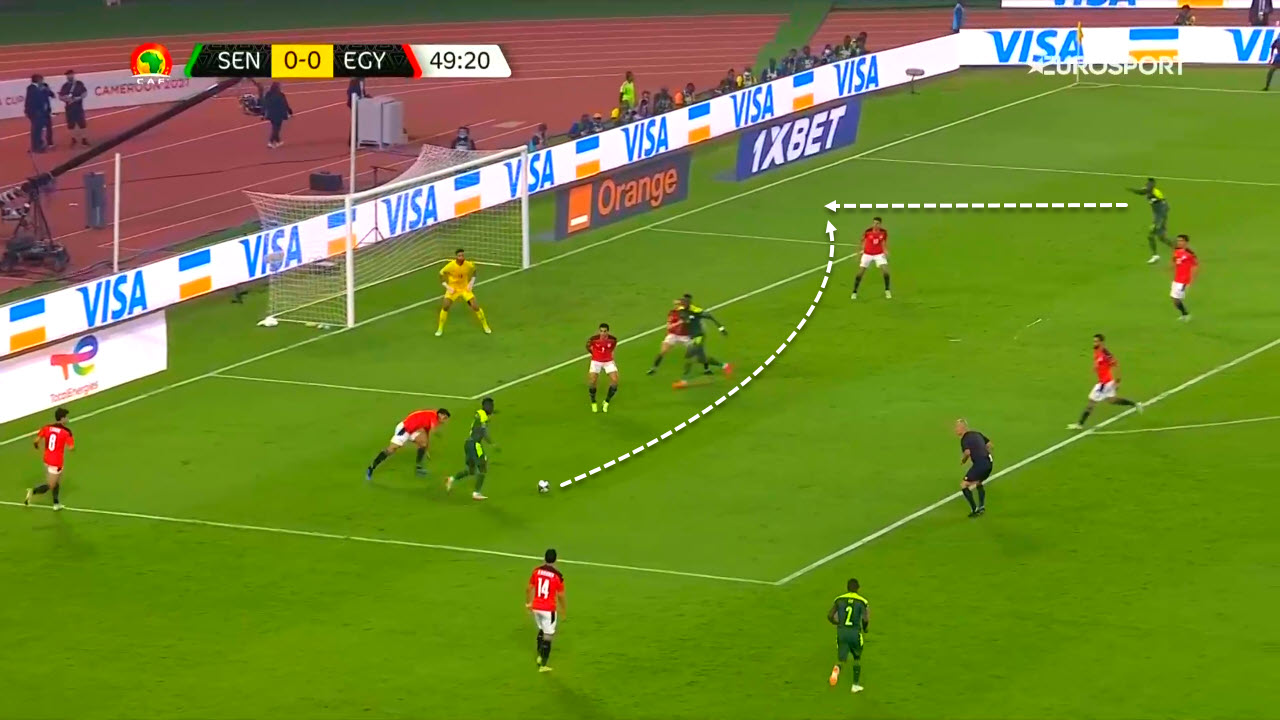 Ciss was one of Senegal’s best players in this match since he was very active on the left flank, won his team a penalty and provided a great number of crosses. In the following example, he was able to serve Bamba Dieng perfectly and the latter bounced a powerful header on the ground and in the direction of the target, but unfortunately for Senegal, Abou Gabal saved it at the last second. 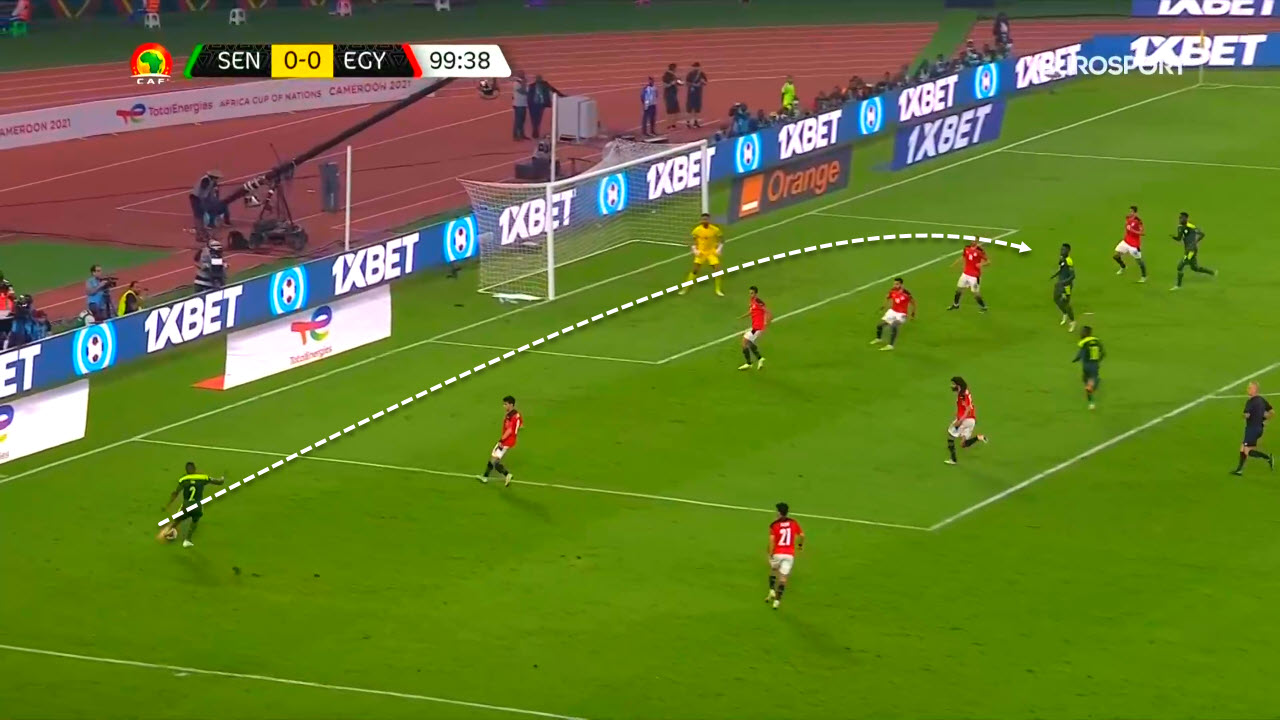 Despite failing to concretise their chances during the 120 minutes, Senegal were able to lift the trophy of the 33rd edition of AFCON thanks to penalty shootouts and especially thanks to Mendy and Mané who were crucial in awarding the trophy to their country.

On the other side, Egypt’s efforts were not rewarded despite preventing Senegal from scoring during the whole match. It should be mentioned that they played more extra times than Senegal in this competition and therefore they were more tired. All in all, it was a successful participation for Egypt given that they reached the final, excluded teams like Cameroon, Ivory Coast, Morocco and caused a lot of problems to their final opponent.