After two breakthrough seasons at Internacional, Yuri Alberto has earned himself a €20M move to Zenit St. Petersburg in the January transfer window. The young centre-forward came through Santos’ youth academy before moving to Internacional on a free transfer at 18 years old. Since then, Yuri Alberto has been a key figure for the Porto Alegre giants with 36 G+A over two seasons. With Zenit constantly qualifying for the UEFA Champions League Group Stage, the Brazilian will have a platform to impress Europe’s biggest clubs.

Yuri Alberto is a complete centre-forward who is able to press, create, and score. He is very intelligent in his movement and positioning but also has the flair and skill to entertain. In this scout report, we will use statistical and tactical analysis to define Yuri’s playing style and why it worked so well with Internacional’s tactics.

Yuri is a very active centre-forward, both in and out of possession. He is not a traditional number nine who looks to stay in between the centre-backs and provide depth, such as Lukaku. On the other hand, he is not a false nine who looks to constantly drop in and get on the ball. The 20-year-old has a very unique playing style, heavily reliant on his movement off the ball. He was crucial in helping Internacional’s attack break into the final third. His movement was key to disorganise defensive structures and create space for others. In addition, he also looked to link up and combine further up the pitch with his back to goal.

In the final third, he is very dynamic. He is very intelligent with his movement inside the box, often finding open spaces to receive the ball. Additionally, he may also look to drop into the half-spaces just outside the box to combine with the midfielders or inverted wingers. Internacional often looked to enter the ‘assist zone’ and deliver low-crosses/cutbacks, and Yuri was critical in that. 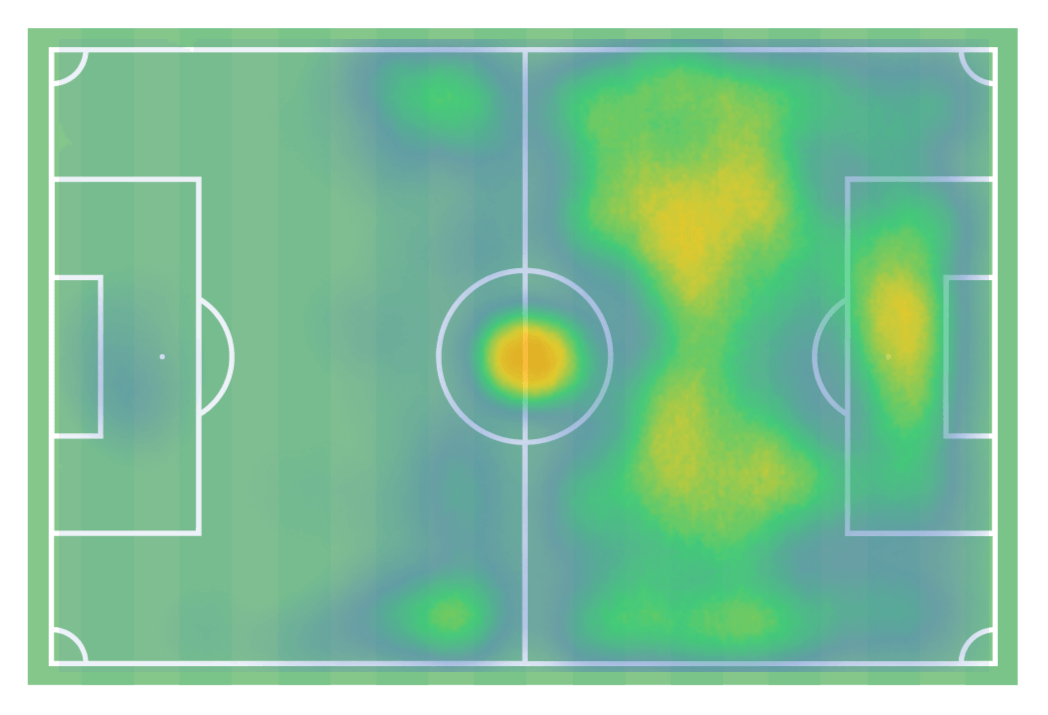 Yuri Alberto’s ability to play with his back to goal is very impressive. Whether his team is trying to enter the final third or create goal-scoring opportunities, he is very efficient in linking up with his teammates. Yuri does not look to drop in and participate in possession very often, consequently averaging a low 19.31 passes per 90 in 2021. Contrastingly, he will look to move into key areas and quickly combine with his teammates. Against Fortaleza, he rarely received the ball in the middle third, but rather as his team looked to enter the final third. Again, it is notable how he tends to position himself and receive the ball in the half-spaces despite being the lone forward. 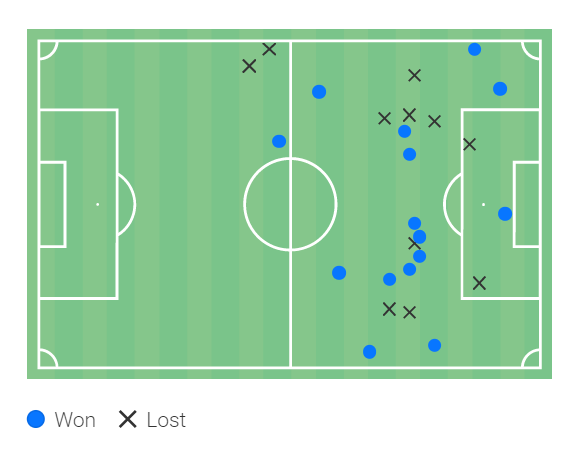 Internacional often switched between a 4-2-3-1 and a 4-1-4-1. At any rate, he always had dynamic midfielders such as Taison and Edenílson attacking the final third and combining with him. Internacional’s first goal against Flamengo is a good example of this. As they looked to take advantage of a disorganised Flamengo defence, Yuri pops in and receives the ball in the half-space. As Filipe Luís closes him down, he is unable to play a back pass and quickly turns with the ball. As he does this, he notices Edenílson sprinting forward alongside him. Yuri lays him off and immediately makes a run in behind to receive the through pass and score the first of his three goals that night. 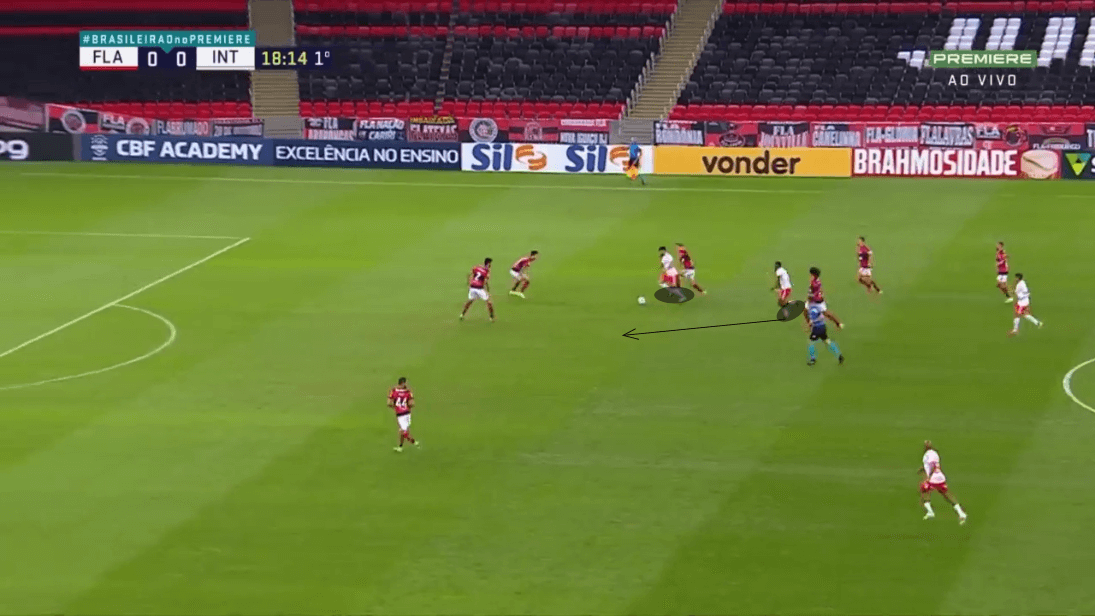 Against Chapecoense was yet another example of this. As Yuri checks in for the pass, bringing the defender along with him, he creates space behind him. Maurício attacks this space and receives an impressive back-heel-through-pass from Yuri. 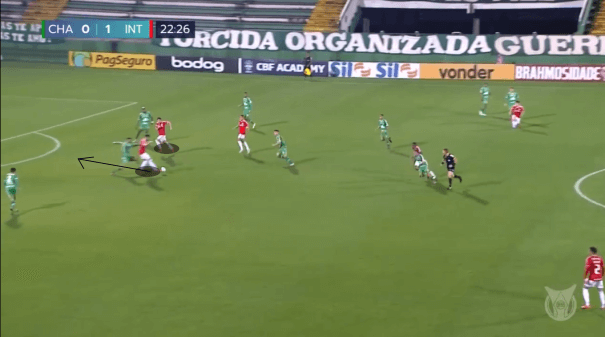 Yuri is also able to use his body and play with his back to the goal. This is essential in possession as he is able to drag a defender out of position and provide support. In his first match for Zenit, this happens as his team look to enter the final third with numbers. After Malcom passes to him, he is able to hold the defender off and lay his teammate off who then switches the ball to the other side. 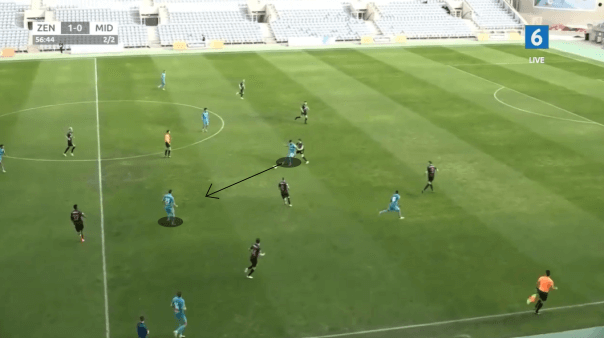 Yuri’s work just outside the box, however, is the most impressive. As seen on his heatmap, he likes to operate in the two half-spaces in front of the box. Initially, he positions himself inside or on top of the box before quickly attacking these spaces. As he receives the ball in this area, he has inverted wingers or overlapping fullbacks making runs behind him. His ability to see these runs and deliver first-time through passes is very impressive. In the second match against Chapecoense, he creates a very good chance with this movement. He pops just outside the box to receive a pass from the wide player before playing the overlapping runner through. 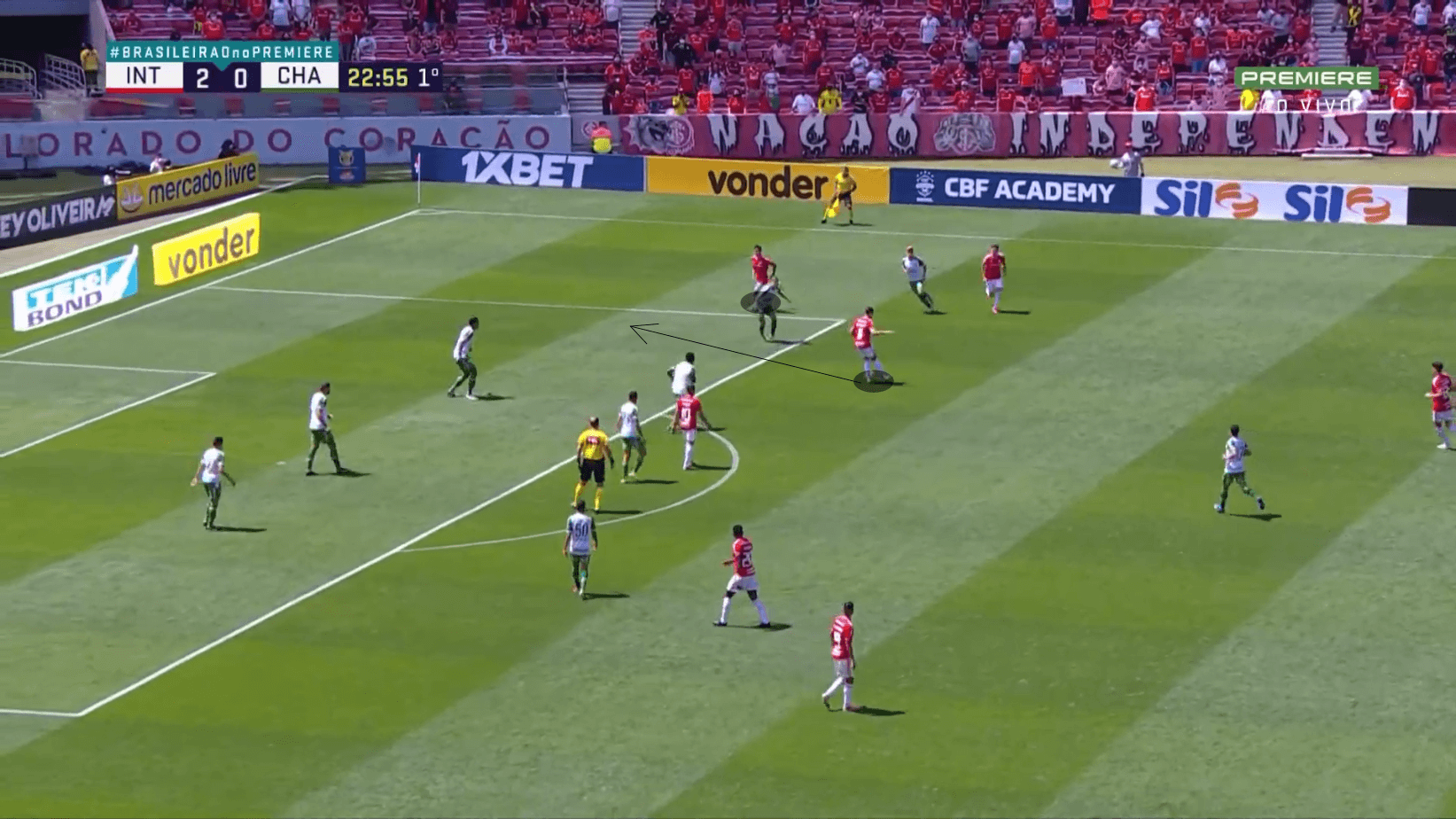 This time more centrally, he receives the ball on top of the box. He uses his body to hold the centre-back off and plays a first-time through pass for the inverted winger making a run. 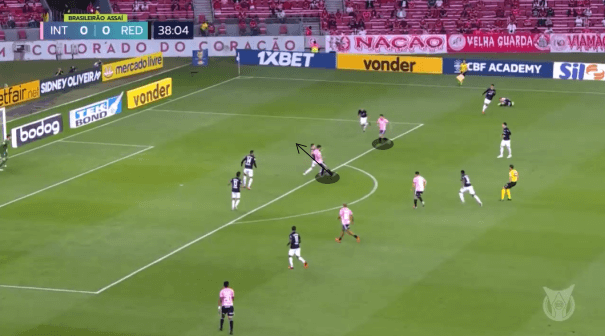 Yuri Alberto is very efficient in linking up with his teammates. Whether to enter the final third or create goal-scoring opportunities, his intelligent movement, awareness, and passing ability are all crucial attributes. He is able to create spaces for his teammates and deliver quality passes. He is also able to combine with his midfielders and attack these spaces himself.

Yuri Alberto is able to be such a consistent threat in attack due to his positioning and movements. His technical and finishing abilities are outstanding, but that alone does not guarantee you 19 goals a season. In 2021, he averaged 2.44 shots per 90. Most of those, according to his shot map, are from high percentage locations (0.39 xG per 90). His movement allows him to receive the ball with that extra second to get a shot off, and his positioning allows him to take shots from good locations. His shot map below indicates he takes the majority of his shots from around the penalty area, or the ‘golden zone’. 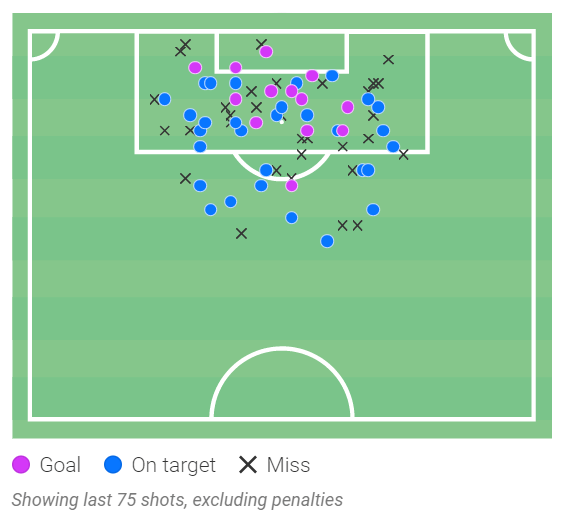 First, it is important to look at his movement outside the box as his team aims to create goal-scoring chances. Yuri is very aware of the defender’s body positioning and looks to manipulate that to his advantage. He will often position himself in the defender’s blind spot, giving him a head start as he makes his runs. In other cases, he will aim to turn the defender one way before making his run the other way, again giving himself a little extra time and space of advantage. Again in his first match for Zenit, he initially makes a run to the defender’s right side, forcing him to turn his body. 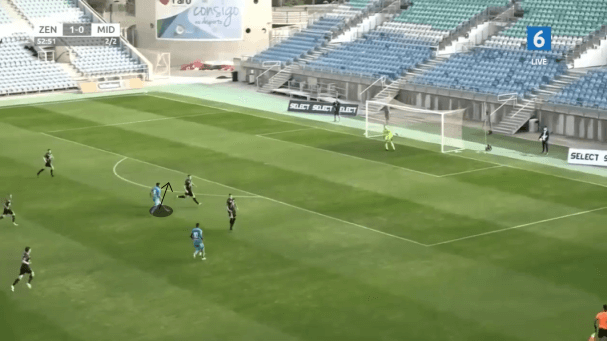 After the defender has turned his body, he makes his actual run to his left. In the image, notice how the defender’s body is turning while Yuri is already accelerating. The simple fake run before gives him this head start. 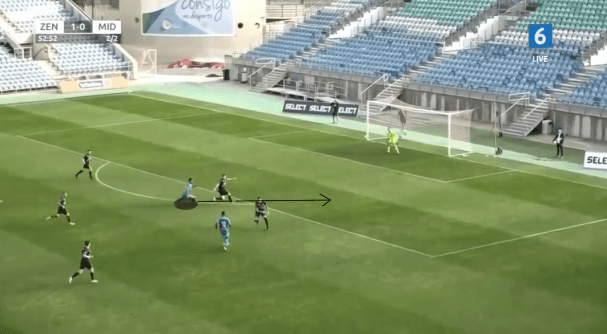 Yuri also makes certain runs, not for himself, but to create space for others. He looks to attack spaces in an attempt to manipulate the defensive organisation. In this first instance, he makes a diagonal run outside to drag the defender and create space in the middle for his teammate to receive the ball. 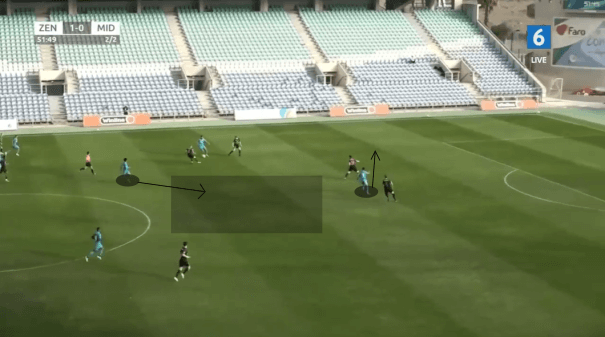 Later in the same play, he makes a diagonal run inside, this time to attract the right-back inside and create space on the left wing for his teammate. 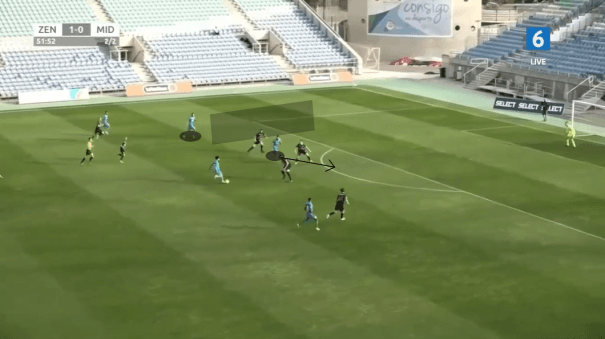 Now it is worth looking at his movement inside the box. He is constantly aware of the defenders’ positioning and takes advantage of that. Additionally, he times his runs very well in order to receive the ball unmarked and in a good position. Against Chapecoense, he realises the defender is watching the ball and immediately pulls himself back to create that separation between him and the defender. 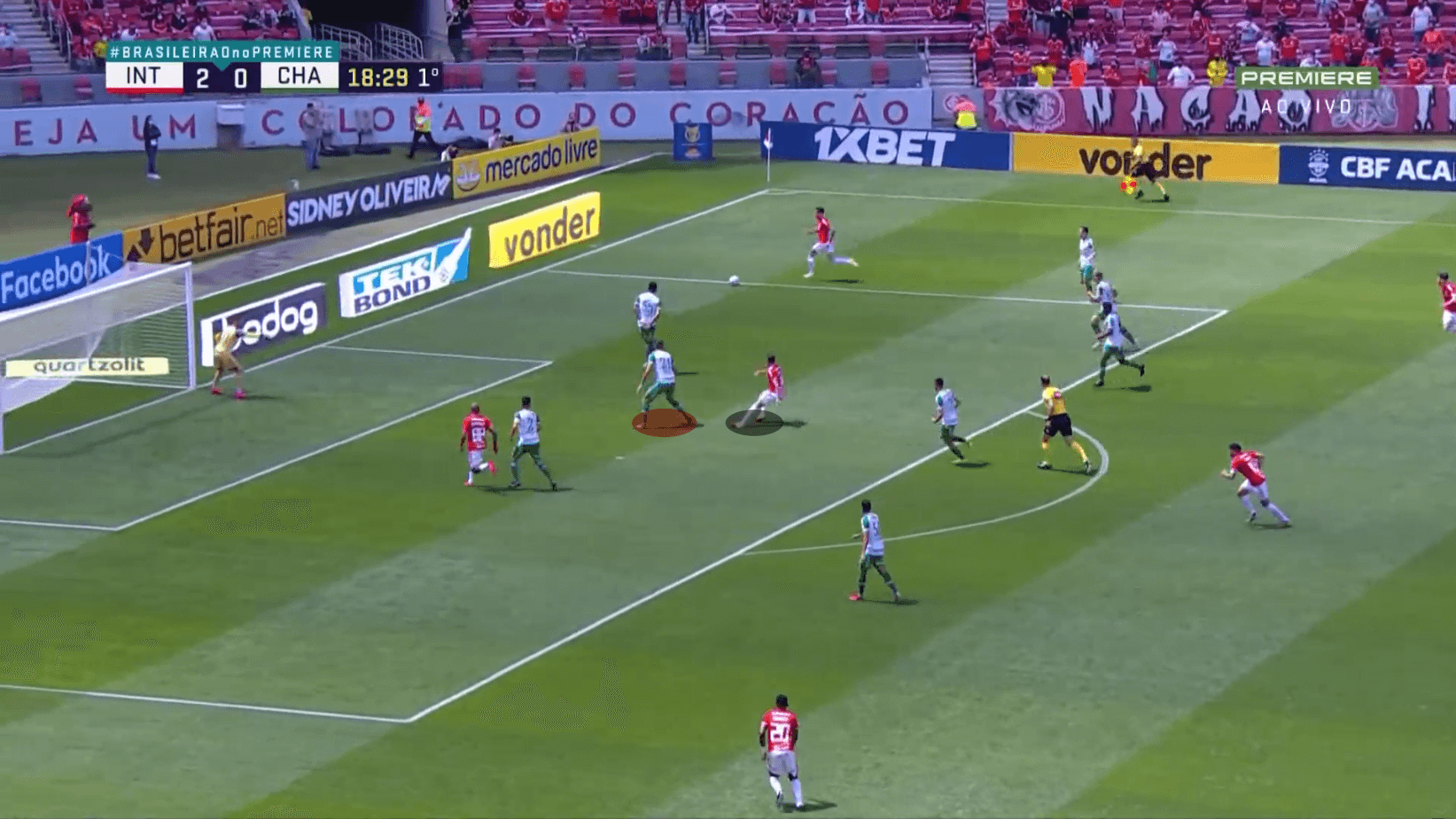 Again as his teammate enters the assist zone, he changes the speed and direction of his run in order to receive the ball unmarked yet in a great position. 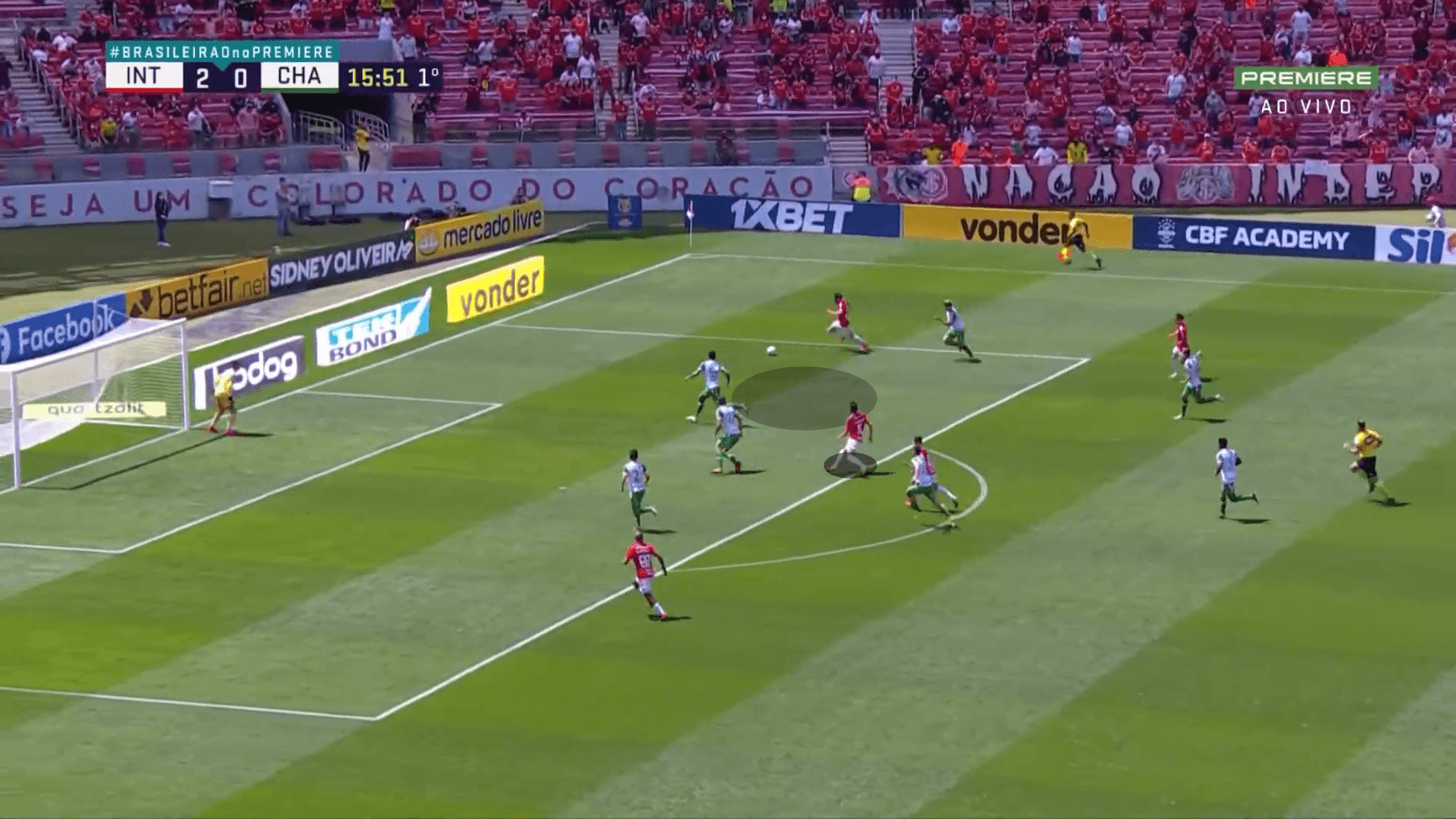 As the left-back has the ball in a wide area, Yuri signalises to his teammate where he wants the ball. The defender in front of him was obviously unable to see the little hand gesture and consequently had no idea where the ball would be played. Internacional’s left-back plays a low driven cross in front of the defensive line and Yuri is able to anticipate it and tap the ball in. 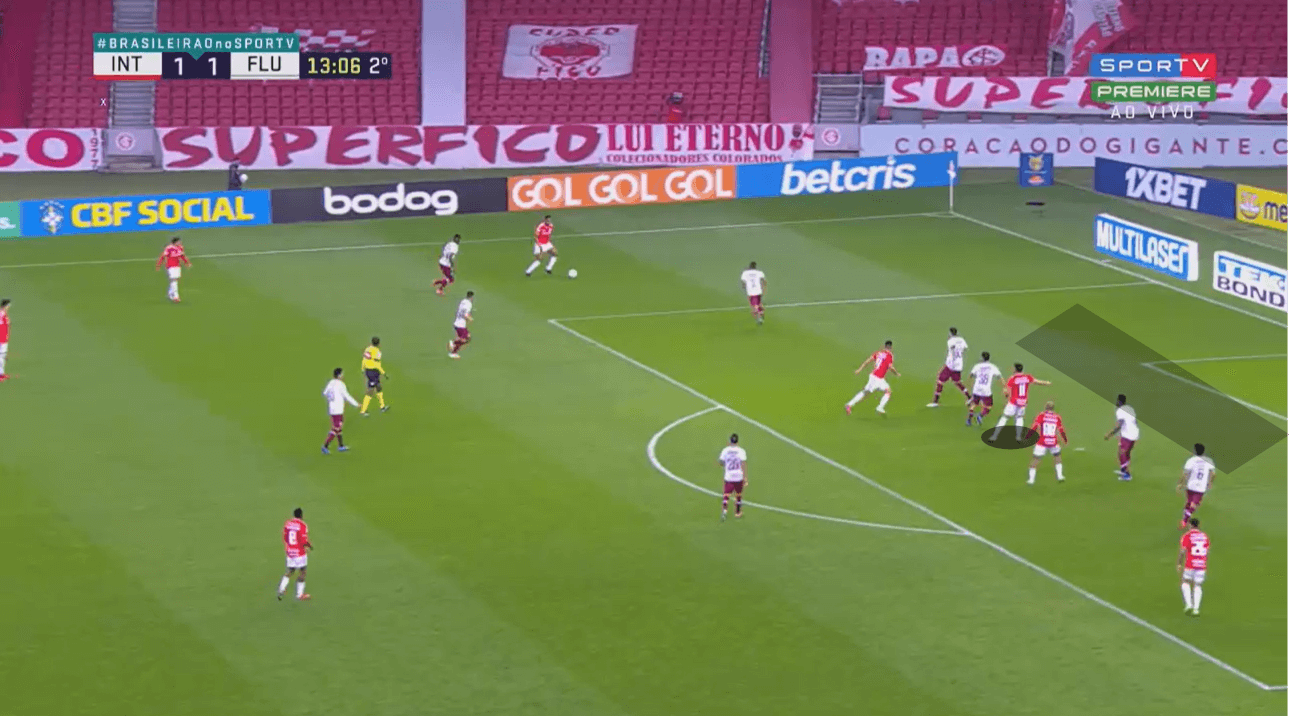 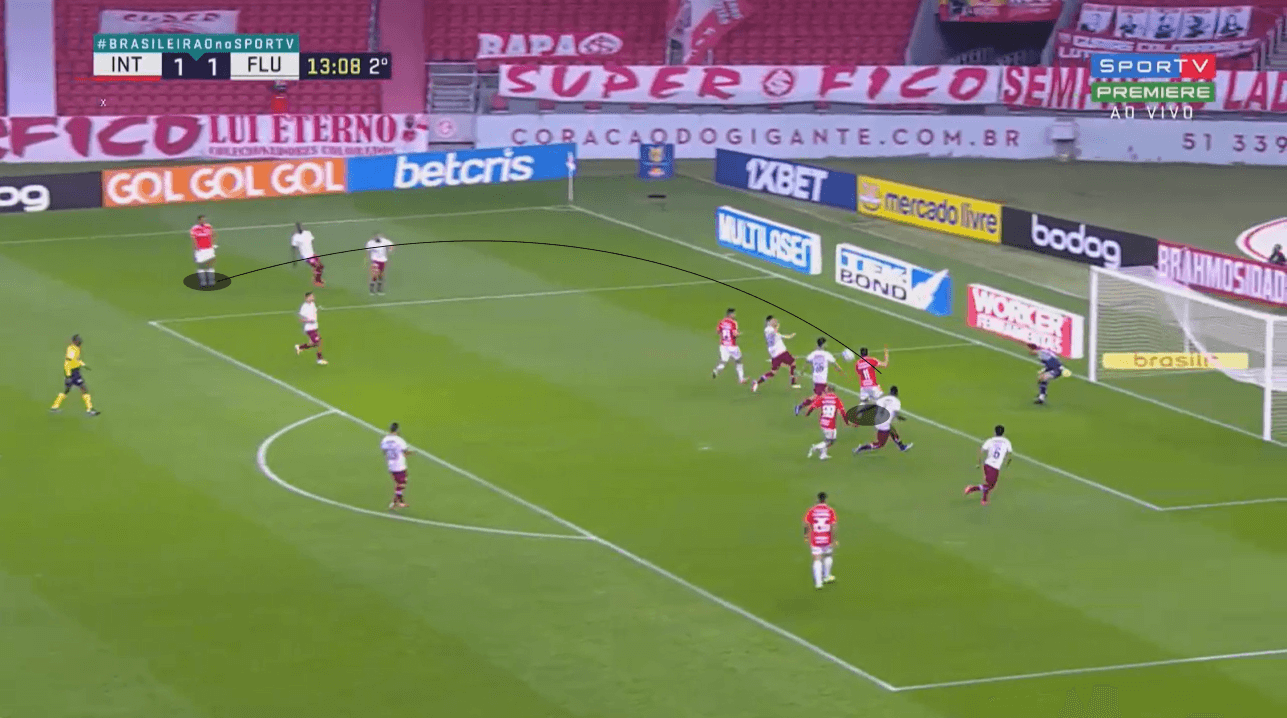 In 2021, Internacional averaged a PPDA of 8.84, highlighting their high-press approach. Yuri was a key part of that as a hard-working pressing-forward. He is an energetic forward and is everywhere on the pitch as seen on his heatmap. He is also aware in his pressing, angling and timing his runs intelligently. In the instance below, Yuri realises Midtjylland’s defender has no passing option and is about to play the ball back to his keeper. As he turns, Yuri is immediately sprinting to intercept the pass or at least pressure the keeper. 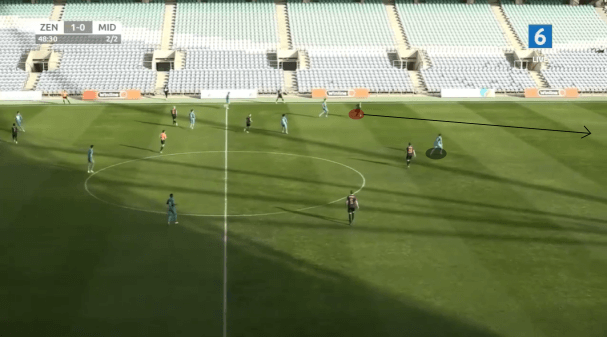 As Chapecoense’s holding midfielder tries to find a passing option, Yuri immediately closes the centre-back down. With the lack of passing options, Internacional is able to pressure and win the ball back. Yuri’s subtle run to close the defender down removes Chape’s outlet and allows his team to win the ball. 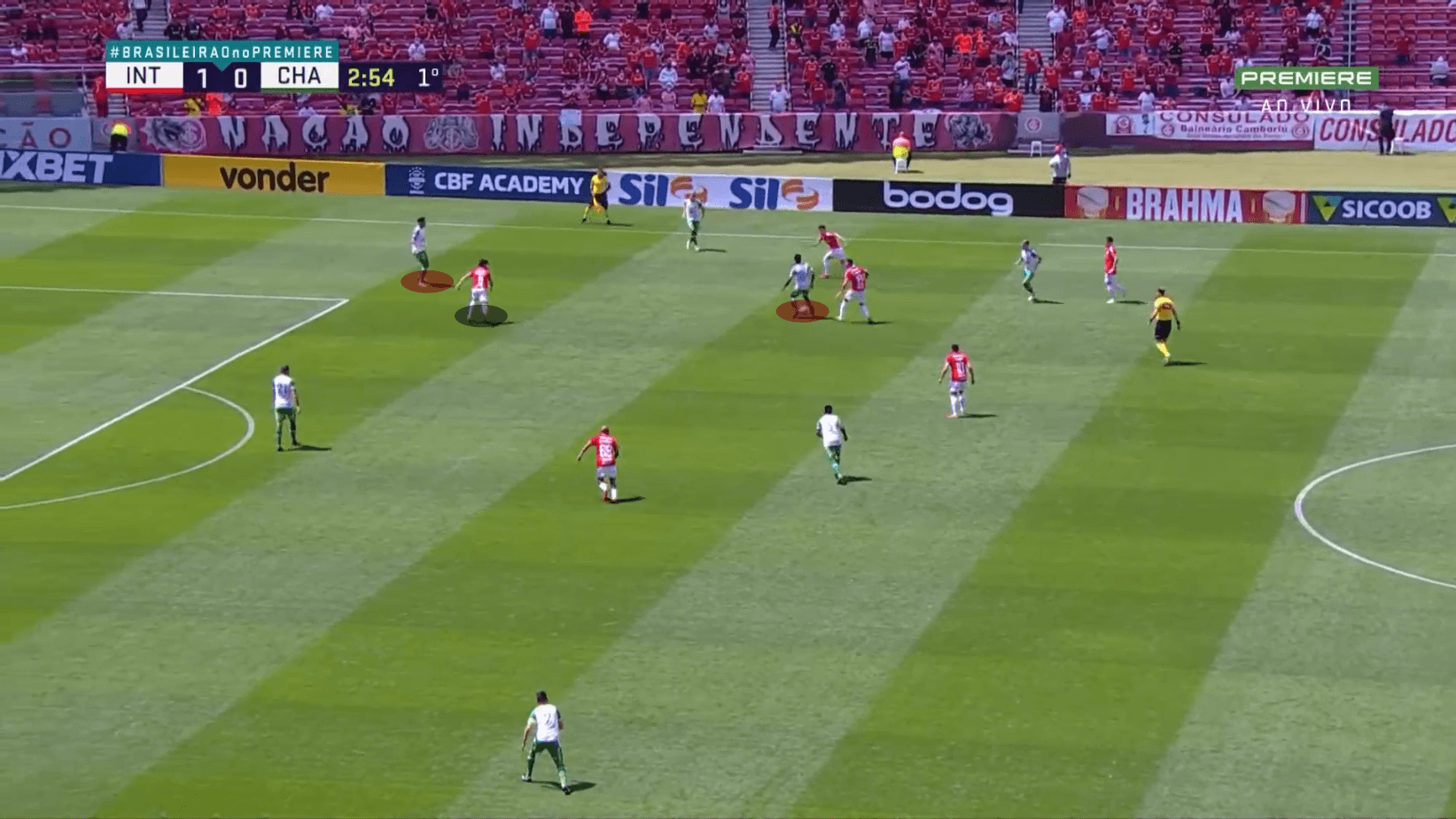 Finally, as Chape looks to progress through the middle, Yuri is pressing the centre-backs. In this instance, he angles his run in an attempt to eliminate the other centre-back from the picture and force the defender to play forward. 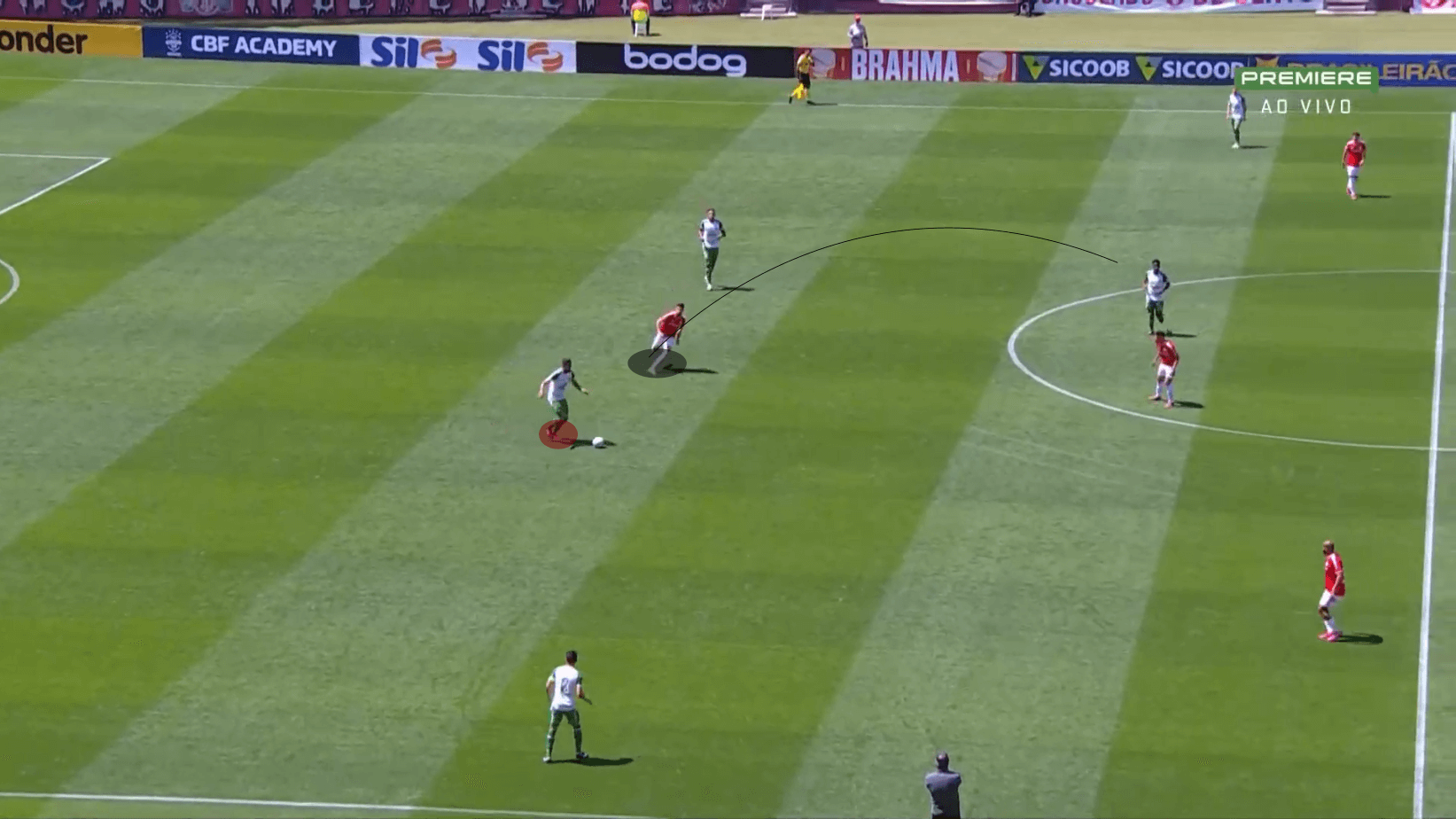 This scout report used tactical analysis to illustrate Yuri Alberto’s playing style and characteristics during his time at Internacional. The 20-year-old Brazilian is a very intelligent and hard-working forward who definitely has what it takes to succeed in Europe. With the Europa League Knockout Stage taking place in two weeks, Yuri will wish to quickly adapt to Zenit’s tactics and playing style. Should he succeed in Russia, Europe’s top clubs will be knocking on the door in no time. 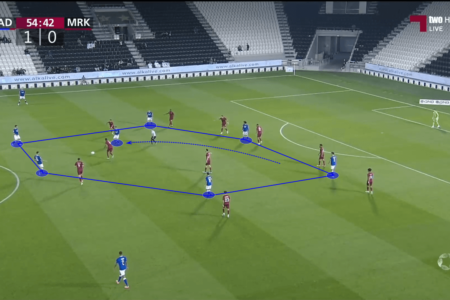 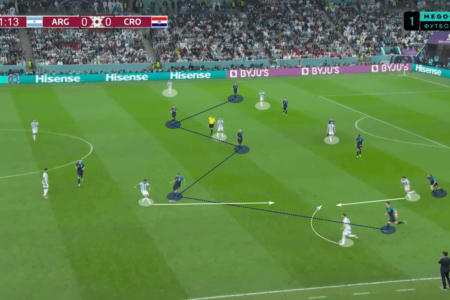