Born in Utrecht, the Netherlands, on the 17th of June 2001, Jurrien David Norman Timber is a full Dutch international who plays for Ajax Amsterdam. Timber began his footballing career in Utrecht before being snapped up by Feyenoord in 2008, ultimately moving to Ajax in 2014. After spending six years in the youth setup, Erik Ten Hag gave Timber his senior debut against Heerenveen as a second-half substitute in the final game of the 2019/20 Eredivisie campaign before the season was suspended due to covid-19.

The following season, Timber established himself as a starter in the first team, scoring his first goal for the club in a 4:0 win. In total Timber has gone on to make 74 appearances for the club, being directly involved in six goals, and has won six caps for the Dutch national team. He’s also succeeded Ryan Gravenberch in winning the Marco van Basten award or the Ajax’s talent of the year for 2022. But where does he play? In this tactical analysis, we’re going to take a look at who is Jurrien Timber and why he might be Ten Hag’s number one transfer target for Manchester United. In this scout report, we will also take a look at Timber’s strengths and weaknesses.

Timber is a defender that mainly features at centre-back although at times he’s been deployed as a fullback and even in defensive midfield. He’s played his best football for Ajax as a centre-back but due to Ten Hag’s fluid system, Timber has a lot of experience playing in a lot of different positions across the back line when his side has possession. Meanwhile, without the ball, the aggressive nature of Ten Hag’s press means it’ll happily follow opposition players into positions that centre-backs tend to feel uncomfortable such as into central midfield or into the wide areas near the touchline. 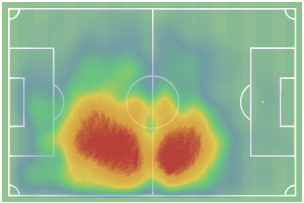 Timber is happy in these situations thanks to his impressive skill set and is a highly mobile player. Timber has good recovery pace and is fairly strong for his size. He’s also a good 1v1 defender that reads the game well offensively. Timber is a very capable, composed passer that has the technical skills to carry the ball.

One of the big things that stands out with Timber is that he is the future of football. As football moves forward with strikers coming off the lines and wingers making those attacking runs, centre-halves need to be capable of tracking really fast footballers. But, also in terms of the high press that ability to step out into midfield and have the agility to make that first contact is going to be very very important. Small, fast centre-backs are gonna become the norm in modern football.

Back to the ball-playing nature of Timber, playing for an Ajax side that averages more than 63 percent possession during his two seasons in the squad, Timber spends more time attacking than he defends. As previously mentioned he’s very good in possession, and extremely comfortable on the ball when it’s at its feet. Timber often attracts pressure by creating space and passing lanes for his teammates. 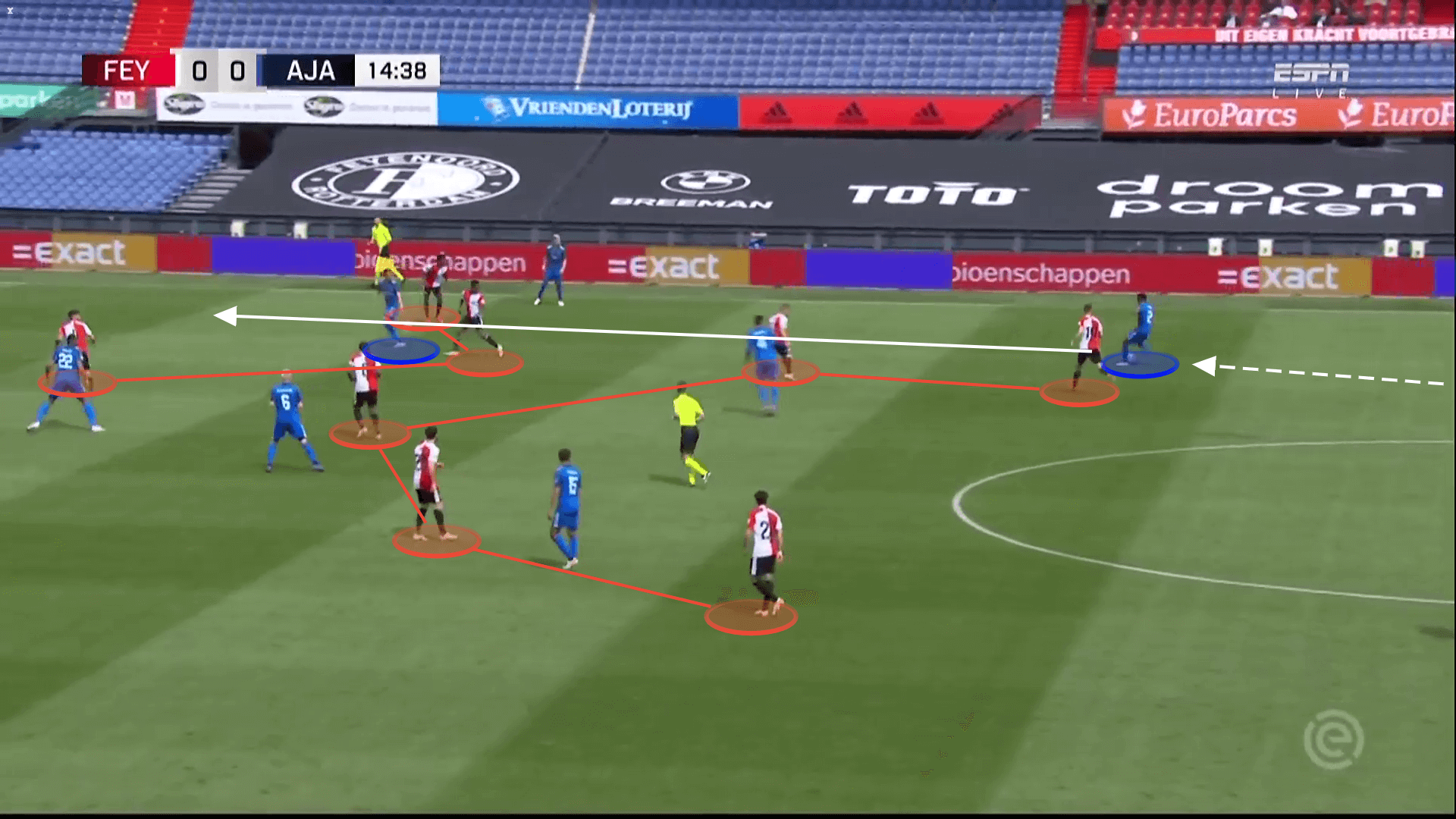 Furthermore, if he lets a presser get too close, he can escape danger with a dribble throwing a body faint and carrying it into space. In fact, in both the Champions League group stages and the Eredivisie this season, Timber has completed more dribbles than any other centre-half. 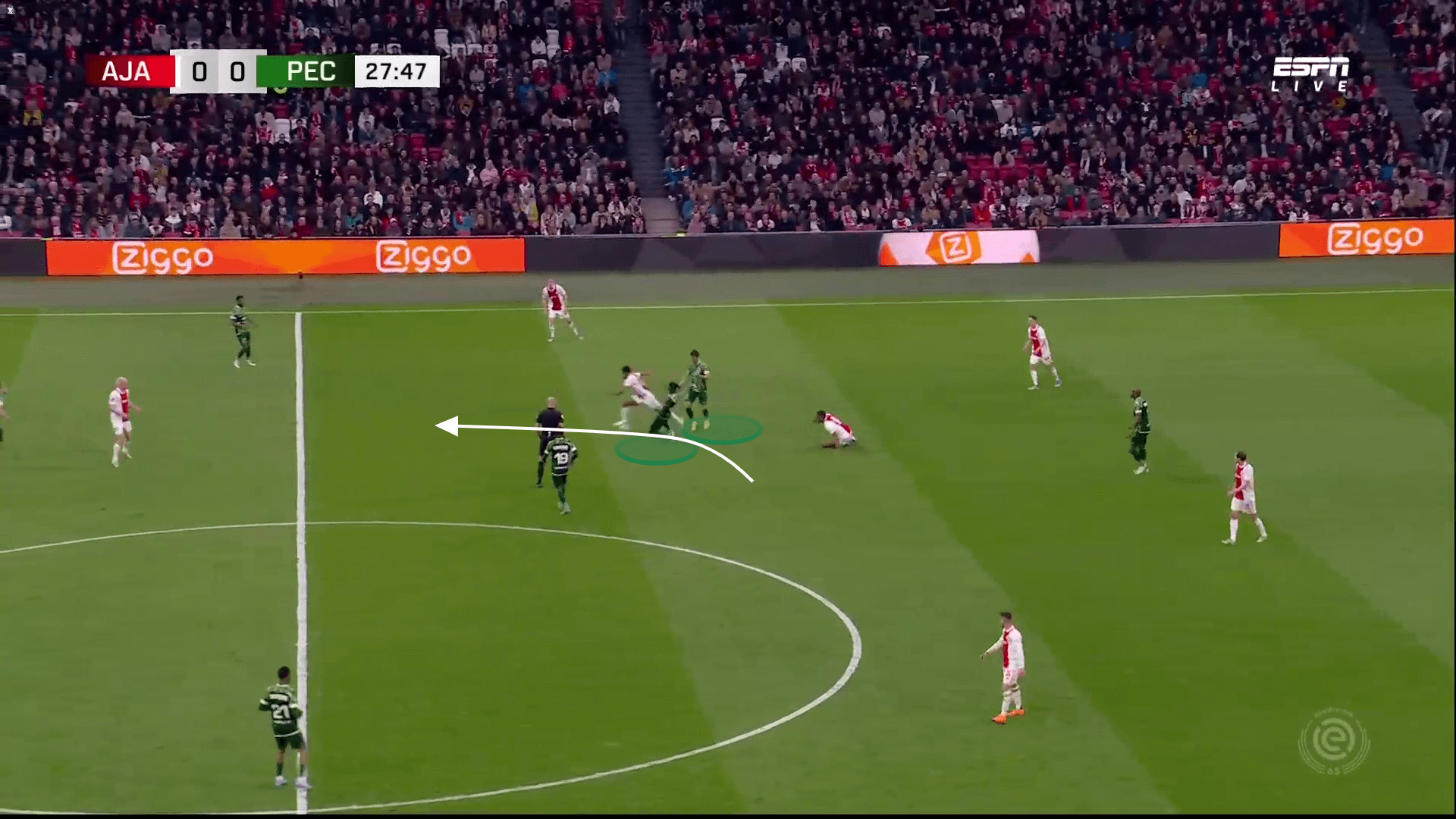 But Timber isn’t slow in possession and is happy to play high tempo passes. Meanwhile, if an advanced teammate is in space, he won’t hesitate to find them with an accurate progressive pass. 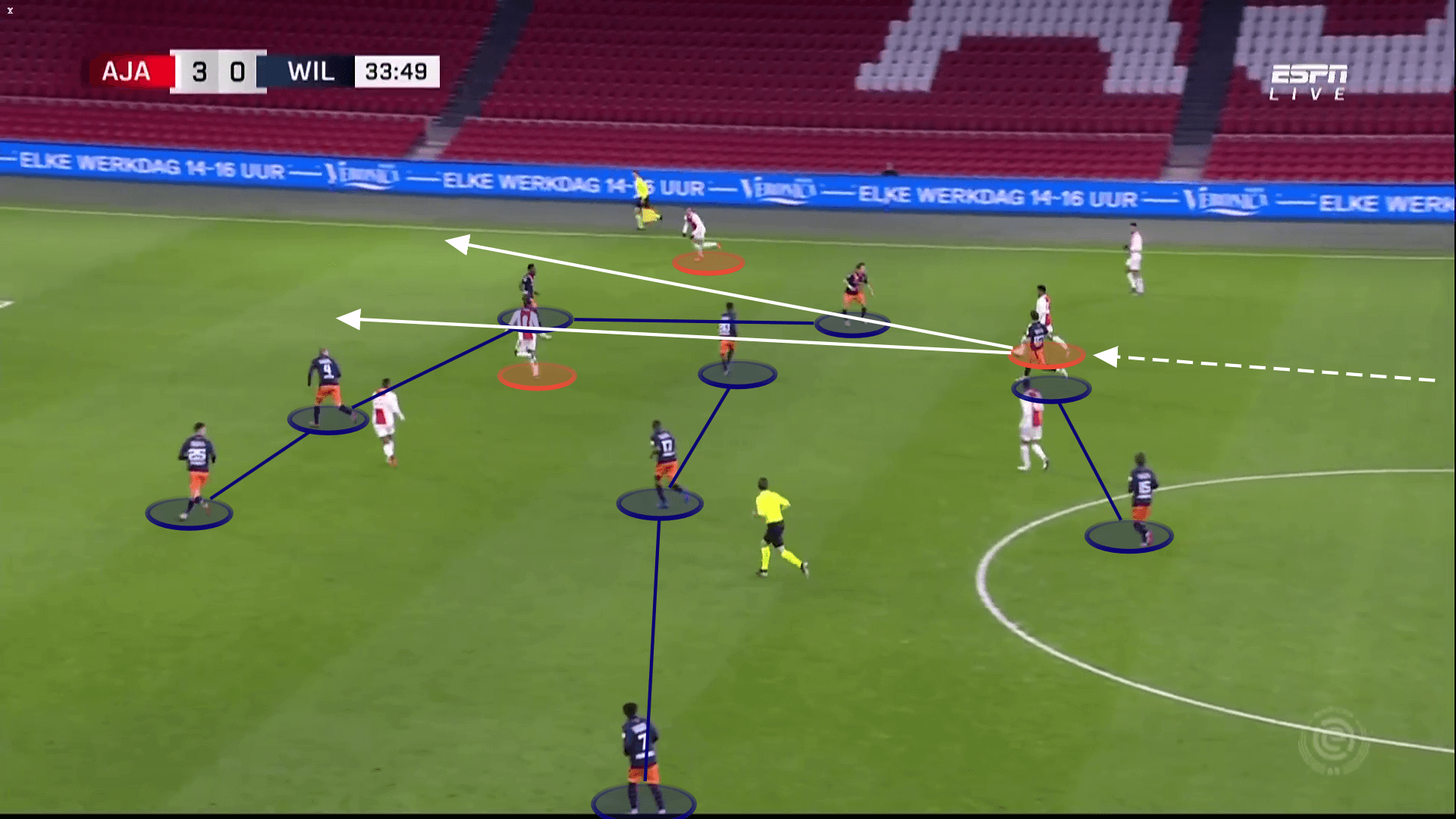 Defensively he reads the game well and has good positioning. He combines this understanding of the game with an aggressive defending style to step in and regain possession for his side – often tackling the intended target before they can properly control the ball or simply stepping in and making a clean interception. In fact, he’s made 134 tackles plus interceptions in the Eredivisie this season which ranks him in second amongst all centre-backs in this season’s Premier League. 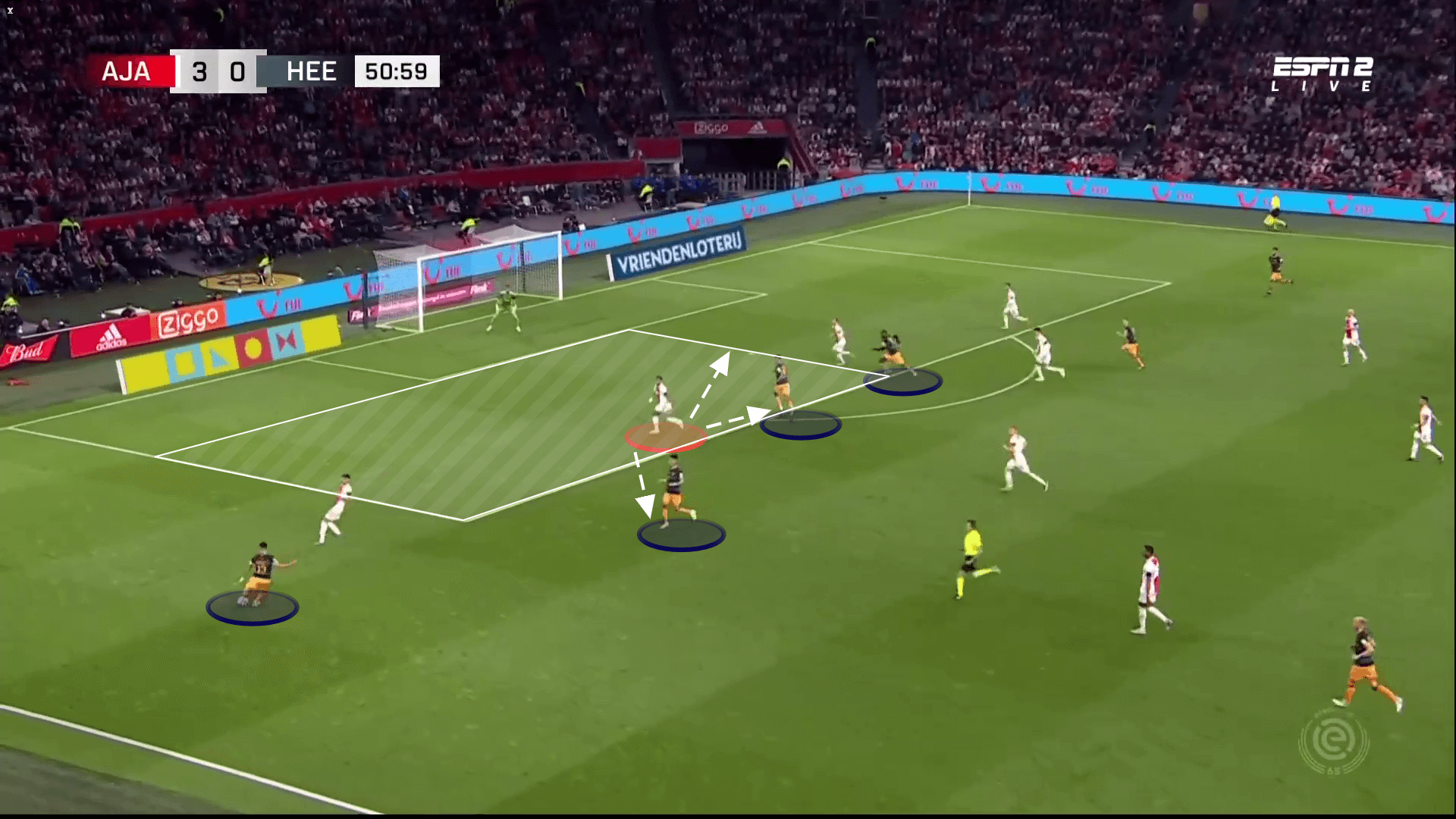 Whilst his active style sees him break up a lot of play it can put him in trouble. His pace allows him to cover distance quickly and this can see him give opponents space to operate in. If the player that is receiving is fast enough, they can bypass timber with a quick layoff to a teammate.

Meanwhile, if the player receiving is a little bit more physical than Timber, they can receive the ball and hold him off with their size and strength. 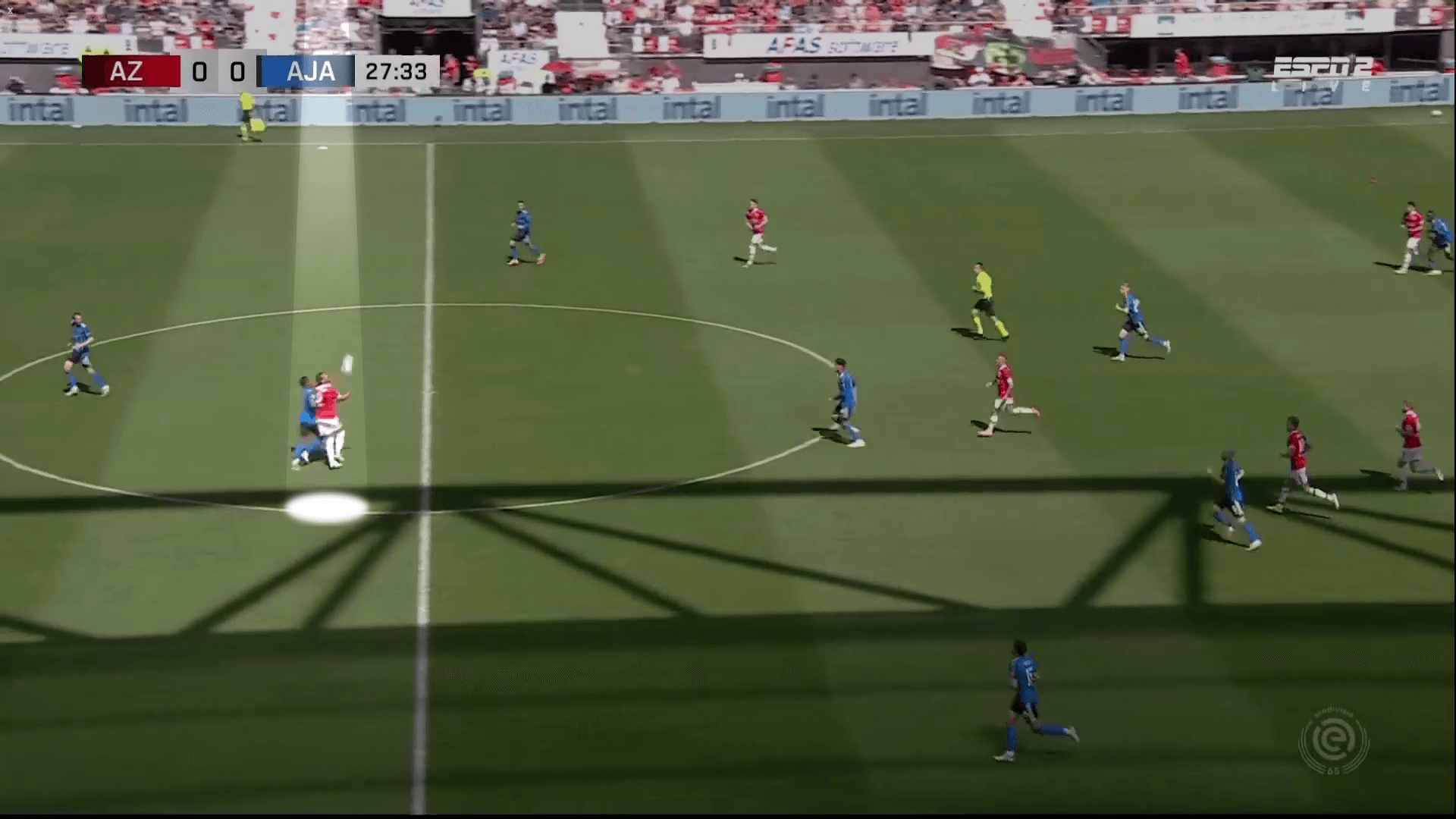 That being said, thanks to the intensity of Ten Hag’s Ajax, Timber’s teammates often get back to help win the ball back. Even when they don’t, Timber still wins duels at a world-class rate: He wins 72% of his defensive challenges which is more than the likes of Ben White, Ruben Diaz, Manuel Akanji and Jules Koundé.

But where Timber really shines is when defending against the transition. Especially in the final third, his reading of the game. speed and aggression see him identify the out-ball before quickly closing the distance and putting in a challenge. Alternatively, if a player is dribbling out, Timber will drop off either to wait for a poor touch so he can step in and make the tackle or he can cover the space in behind with his speed either dropping off or making interceptions and ball recoveries or simply matching the ball carrier for pace.

In fact, the opening goal against Cambuur not only highlights this but showcases his talent as a whole. We start with Cambuur in possession. As Ajax have engaged their press, the visitors managed to play out of danger well. With the striker running onto the ball at speed initially, Timber drops off to position himself but a heavy touch allows him to step in. 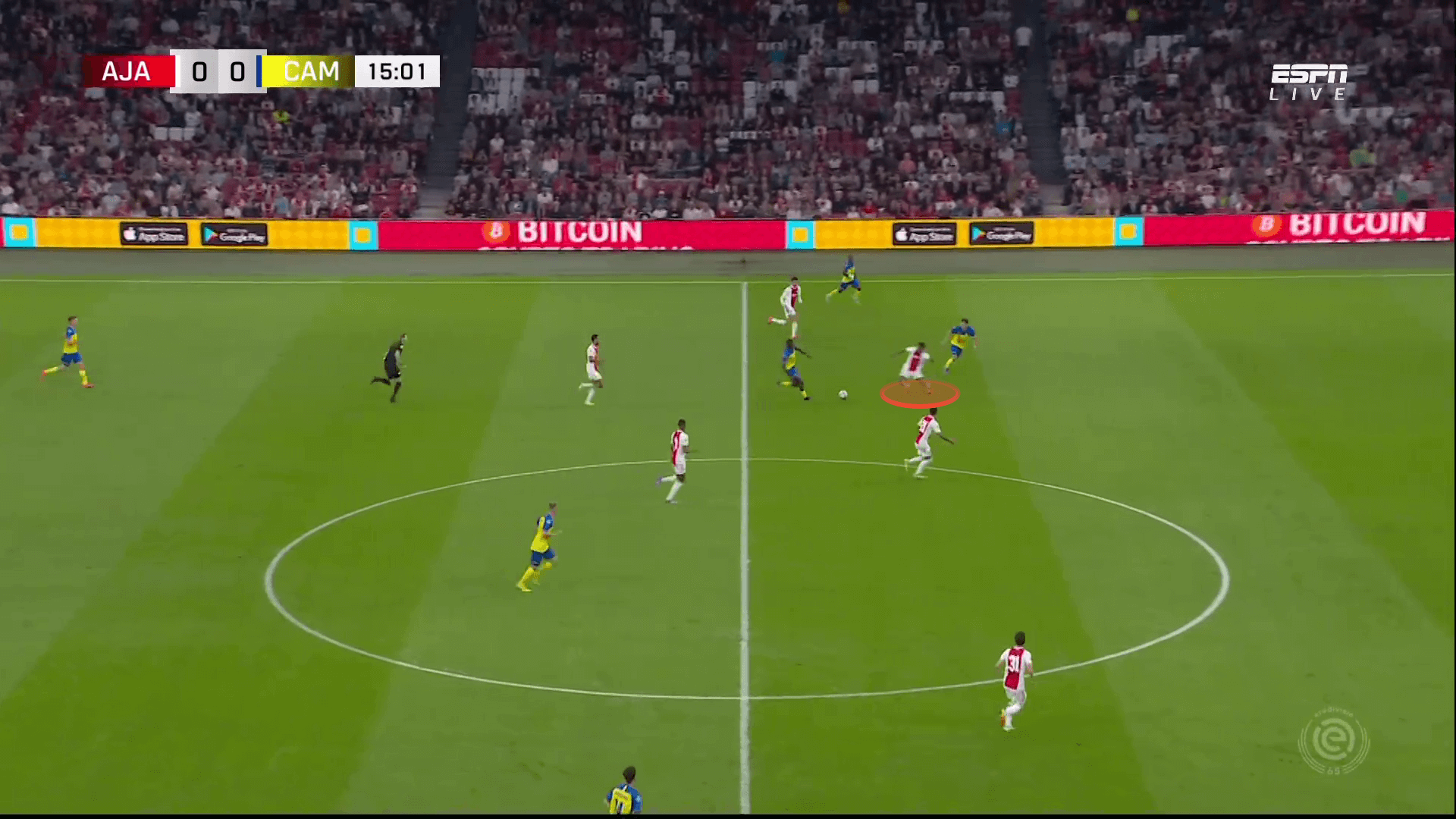 Timber wins the tackle and breaks the counter-press with a dribble. He carries and releases to Berghuis. 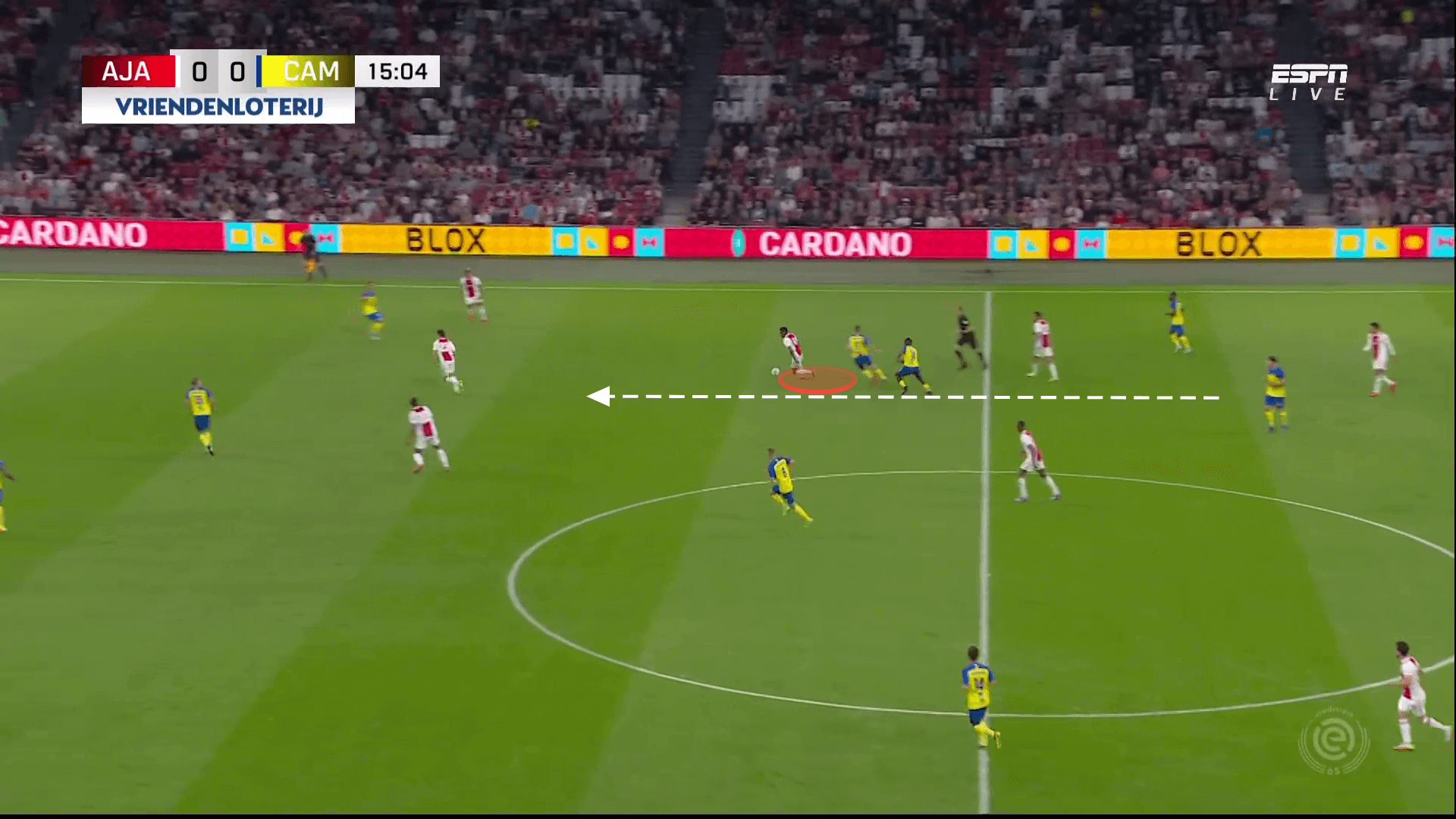 He gets the ball returned and shoots the ball into the bottom corner. 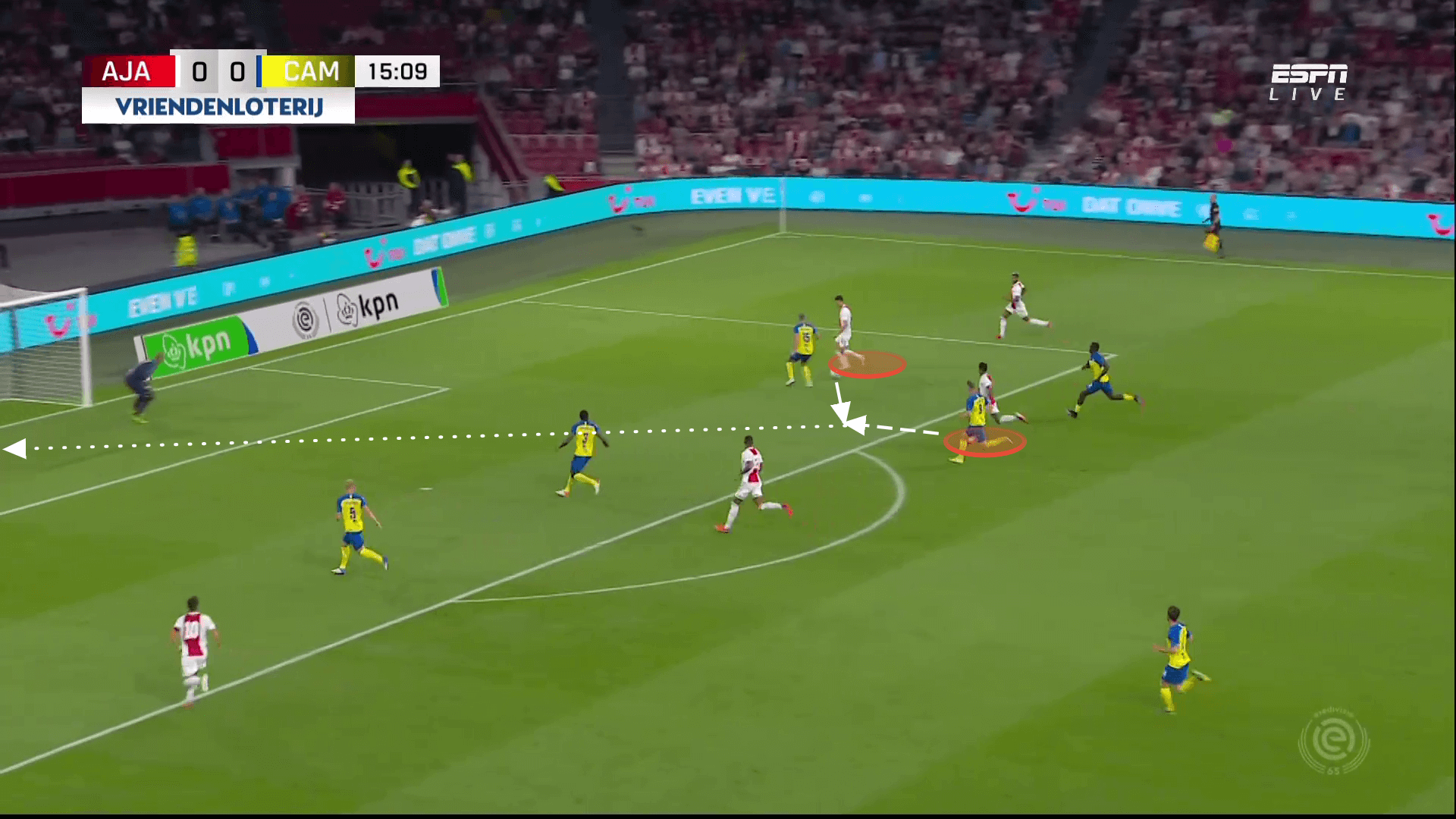 This is a great goal for the 20-year-old, turning a potential five on four for Cambuur into a five on three in Ajax’s favour with a well-timed tackle and confident dribbling. Then, he’s possessed the talent to round it off with a striker’s finish.

So, what does the future look like for the Dutch international after a season and a half of professional football? Timber has already established himself as a key player for Ajax and, at just 20 years old, has attracted a lot of interest. He could play at all of the top European clubs, but the most likely destination is following Ten Hag to Manchester United.

The Red Devils need defensive reinforcements. After this analysis, it is clear that Timber fits this profile of an intelligent and quick cover defender that’s very good at progressing the play. Whilst he’s not got Premier League experience, Timber has got experience with Ten Hag’s tactics which could help implement his possession game. He also has the skill set to play right-back or in defensive midfield with Ten Hag suggesting that his future could even lie in that area. At 20 years old, Timber is not the finished article yet but is one of the most talented ball-playing defenders in Europe.