Is there a higher peak in football than scoring the winning goal in a Champions League final? For Vinícius Júnior, it was the crowning moment in a season that already defied expectations.

Not only has the young Brazilian helped drive Real Madrid to a La Liga title, but at just 21 years old, is one of the brightest sparks in a team full of superstars.

Previously criticised for his decision-making and lack of end-product, this year’s version of Vinícius is anything but not clinical. Undeniably, he has become the player many doubted he ever could be: the complete winger.

In this scout report, we unwrap the many qualities of ‘Vini’, why he is so integral to Real Madrid’s tactics, and provide a tactical analysis of what has made him so special in the 21/22 season.

There may be no better example of a ‘pure winger’ in the modern game than Vinícius Júnior. A right-footed forward playing exclusively on the left of a 4-3-3, his task is to create chances and score goals.

Positionally speaking, his role is clear-cut. Vinícius’ season heatmap alone gives a good indicator of the type of player we’re talking about. One who starts high and wide, and whose influence grows the closer he gets to the box. 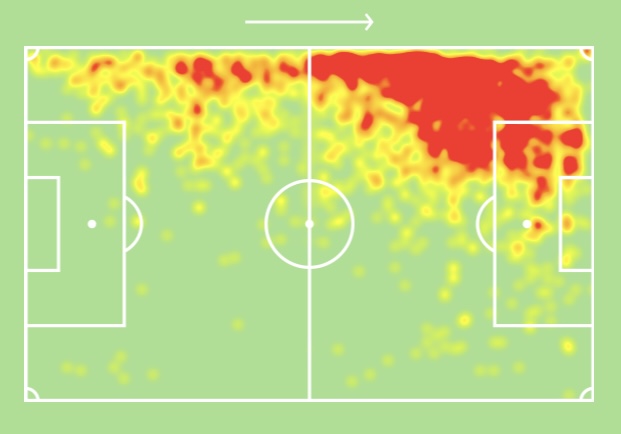 Things get more interesting, though, when we consider Real Madrid’s tactics, and how his role has become more specialised.

Madrid, bucking the trend of many modern league winners, are not so much concerned with possession as they are with attacking space quickly. That’s not to say they don’t want the ball. In La Liga, they averaged just over 60% possession across the season. What differs in their approach is how quickly and directly they progress the ball forward, particularly in offensive transitions.

Despite seeing a lot of the ball, Real Madrid are at their most dangerous on the counter-attack. That’s also where Vinícius comes into his own.

With limited defensive responsibility, in a team full of excellent playmakers, Vinícius has a clearly defined role as a match-winner. To break forward with dynamism, with freedom, and to finish off a swift, decisive transition. He’s bagged 22 goals and 20 assists (in all competitions) as a result.

To quote the great Ray Hudson, he is the “thunder at the end of Real Madrid’s lighting attack”.

For some perspective, here’s a quick data analysis on how good his output has been this season.

Crudely speaking, Vinícius’ value to this Real Madrid team is directly proportionate to how many goals and assists he can rack up. But looking below those surface numbers, we’re clearly dealing with a winger with outstanding quality. 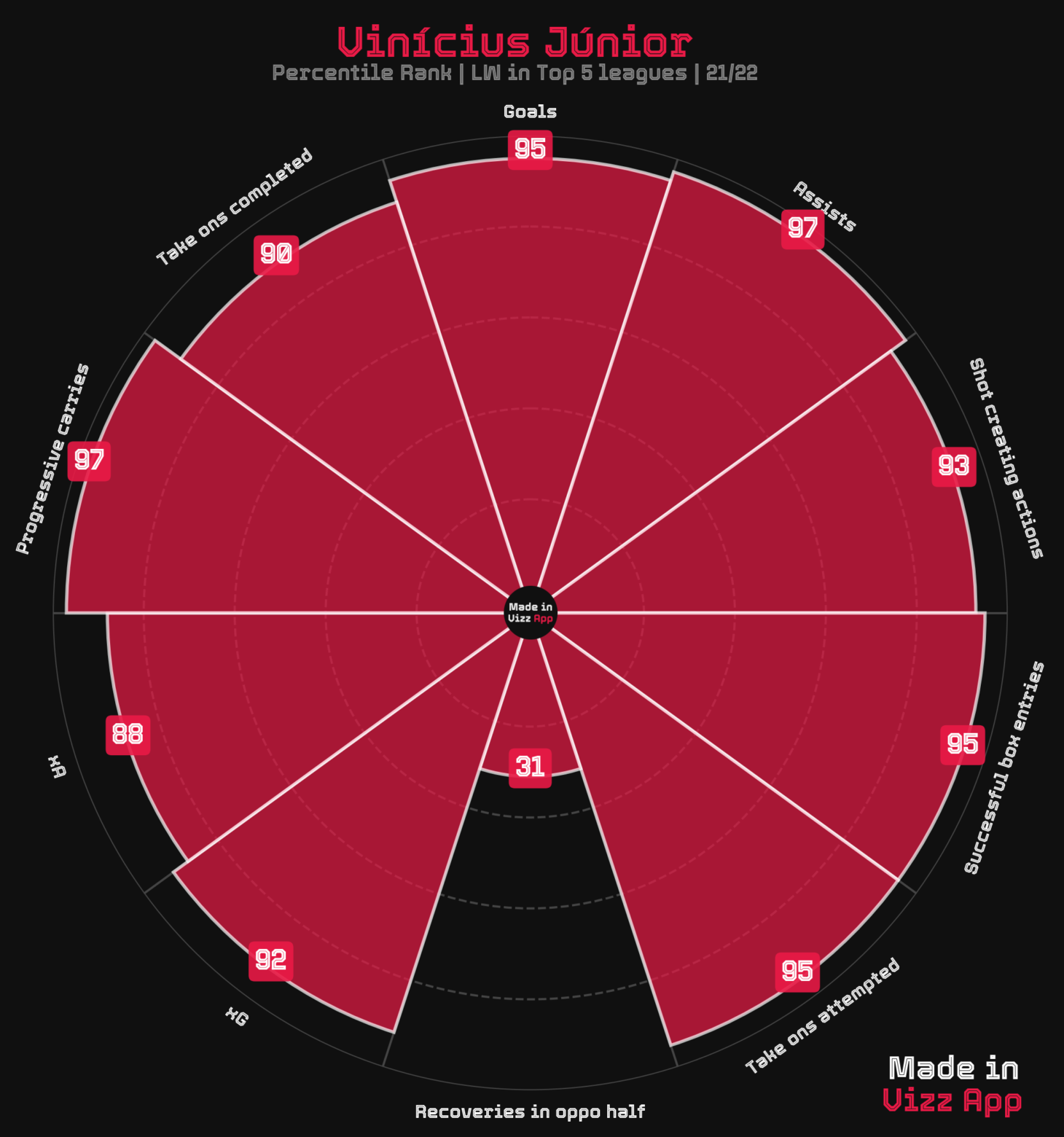 This is an absurdly well-rounded attacking profile. Not only a fantastic dribbler, goal scorer or creator but able to do all three at the highest level. This is rare. And there are some even more impressive numbers on the way.

For example, when it comes to finishing, Vinícius has over-performed his xG by 3.9 goals. Last season he was underperforming it by 3.5.

Of those four players, he’s involved in more shot-creating-actions than three of them. Only PSG‘s Neymar pips him.

In other words, Vinícius maximises his role as a purely offensive, match-winning forward. How? Let’s take a look at his game and see exactly what he is doing so effectively.

Vinícius’ movement can be best described with a single word: direct. Against a high line, he’s looking to run off the shoulder of his defender almost every time. 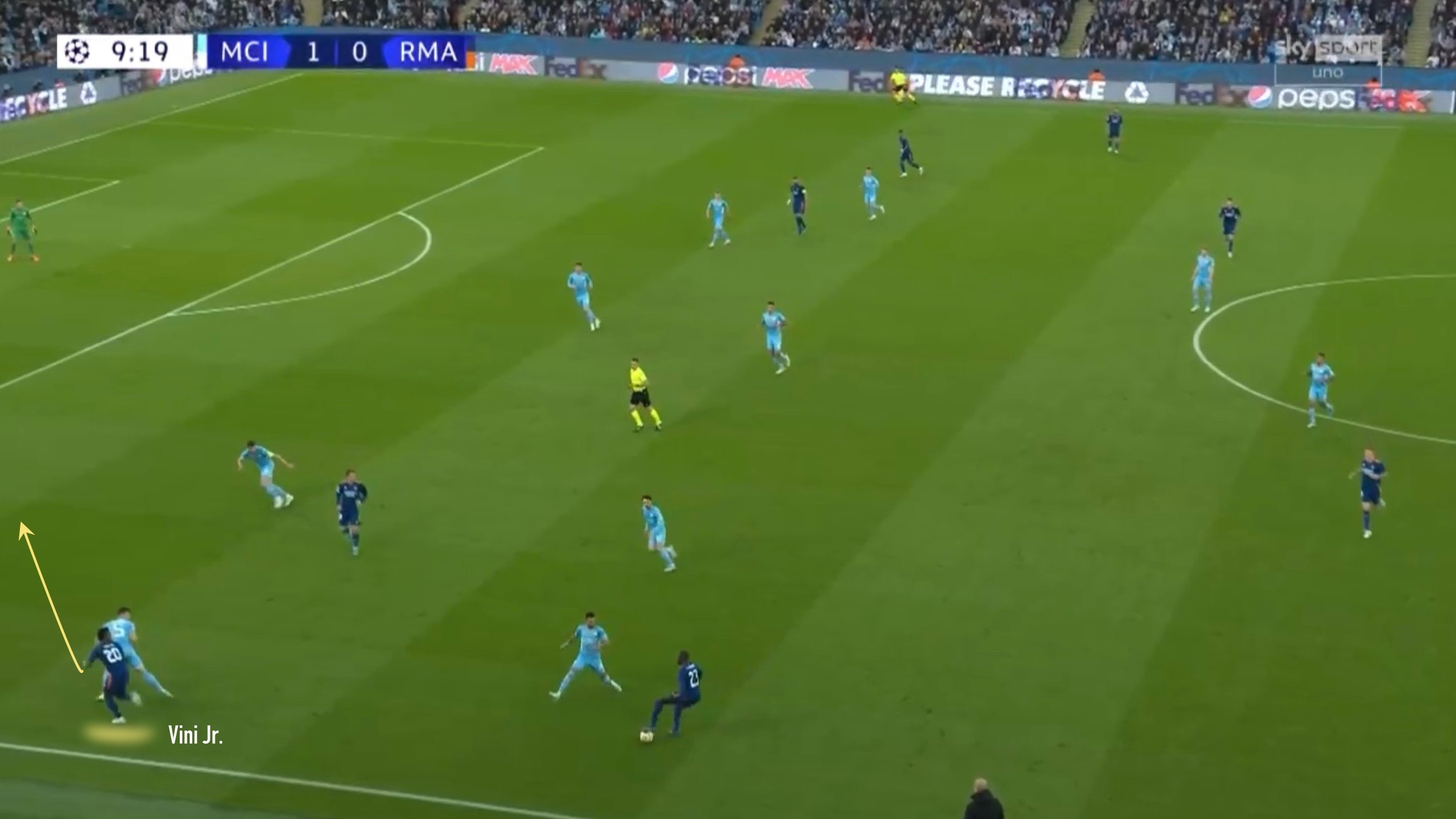 This is particularly the case against big teams in big games. In the Champions League final, for example, Vini attempted to break forward with essentially every transition. 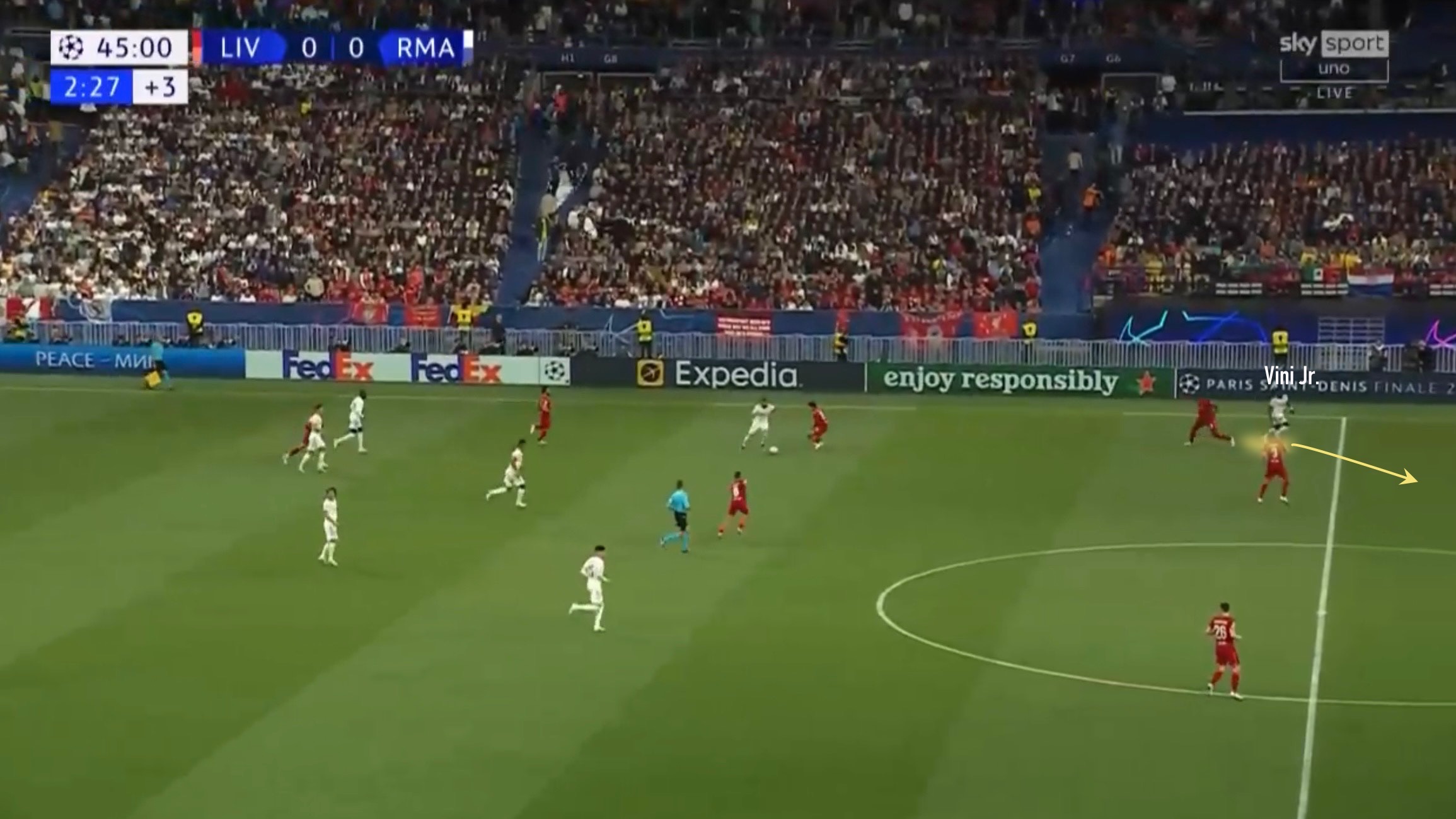 His starting position is on the touchline, and the out-to-in movement gets him in behind. It’s nothing revolutionary, but the frequency with which he does this (often for a full 90 minutes) is admirable.

While a lot of players might see this as a ‘sacrificial’ role, it’s an essential part of Real Madrid’s game plan. Stretch the opposition, turn the defenders around, and make them defend the space behind them. It’s a gruelling task.

Because of this, and how quickly his team transitions, Vinícius often finds himself in very favourable attacking situations. More so than, for example, Ousmane Dembélé at Barcelona, whose slow build-up frequently results in 1v2 or 1v3 situations against a low defensive block.

Vinícius is much more often in 1v1 scenarios, if not running directly towards the goal. Of course, there is a catch to this.

While a player like Dembélé has minimal space to work with, he often has a lot of time. Vinicius works in reverse reality. Where space is at a premium, but time is not. Every action must be taken quickly, decisively, and at high speed. Executing these decisive actions, as the counter-attack clock ticks and defenders mould back into shape, is not easy. Vinícius makes it look so.

One of the traits that make this possible is his explosive dribbling ability.

Vini is one of very few players who can operate regularly at high speeds, without losing control of the ball or lowering the quality of his end-product.

In terms of dribbling, this makes him a devastating attacker into space. Capable of beating a defender with a couple of touches or less.

In the same way that his movement is always off-the-shoulder, his dribbling is focused on pushing the ball behind the defender quickly. He’s always looking to trap the ball and accelerate towards the goal with as few touches as possible.

In the example below he takes three touches: control, move, accelerate. 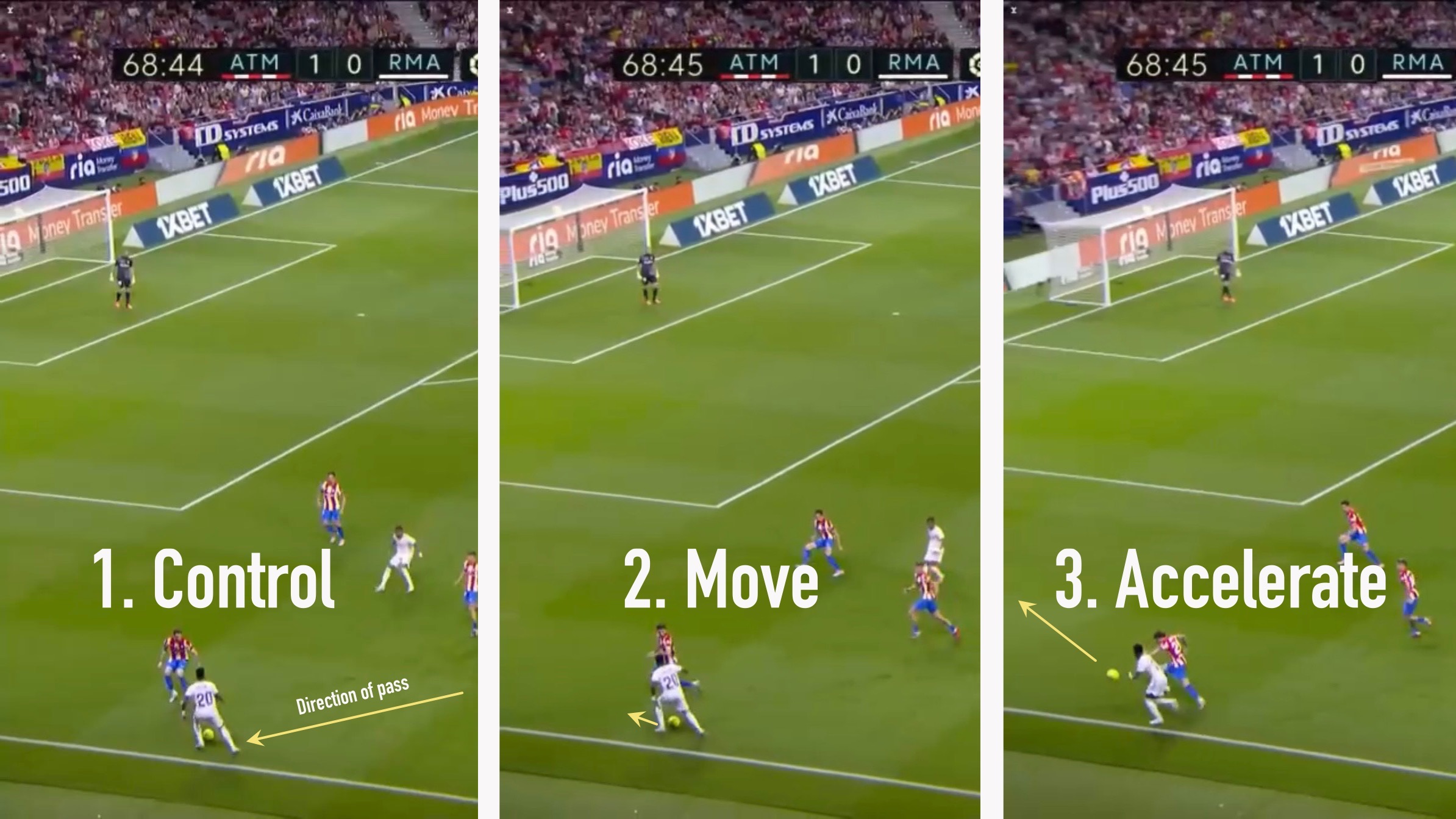 All of this is executed automatically. In other words, it doesn’t give the defender time to think. Where other players might control, look up, and take on a defender, Vinicius has done all of this before the ball arrives. Receive, accelerate, repeat.

When possible this only takes two touches. The first touch moves the ball forward, carrying the momentum of the pass into his stride, while the second pushes the ball far beyond the defender’s reach. Even against the rapid Ronald Araújo, this was too much to handle. 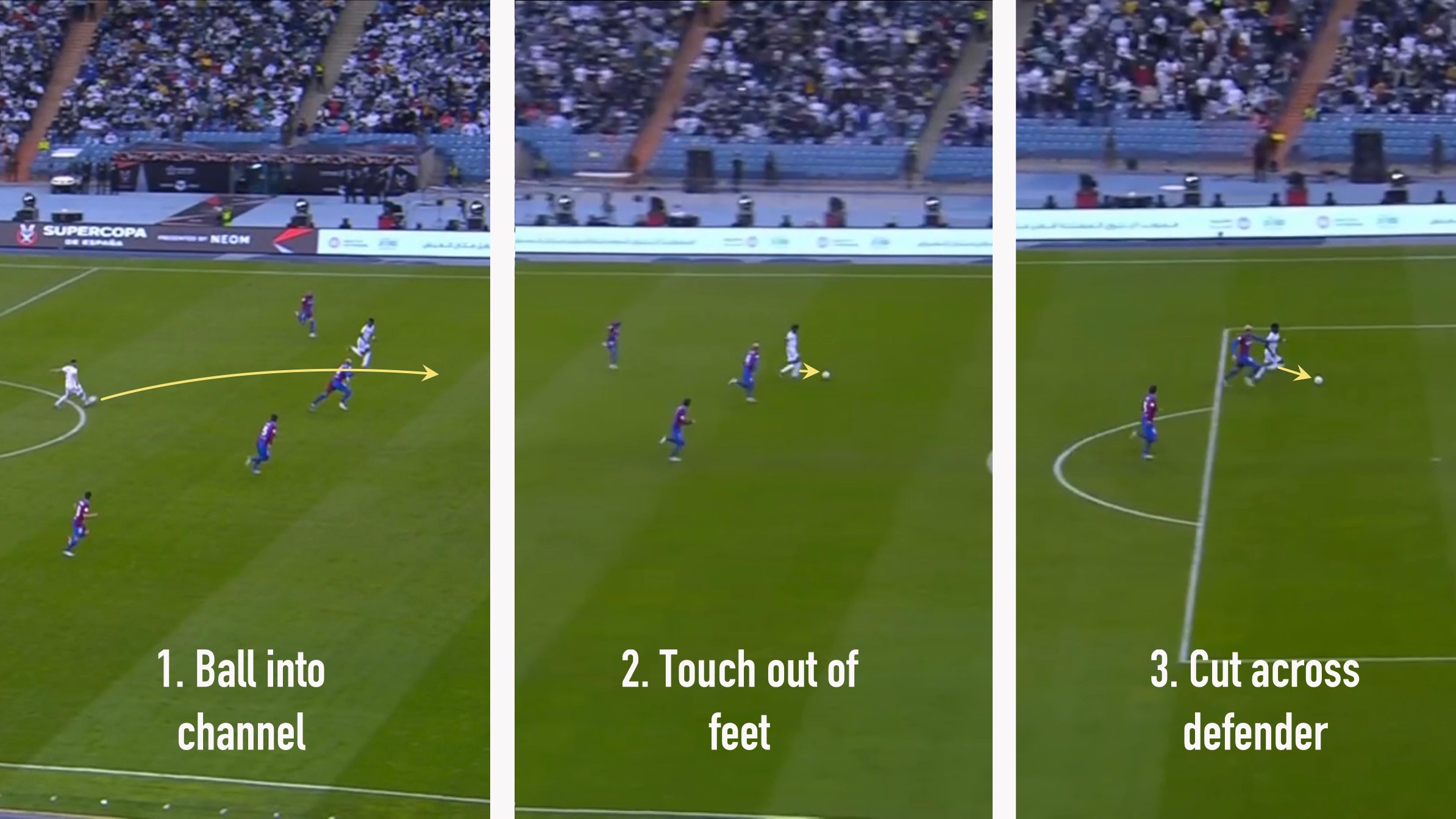 To do this requires two things. Firstly, immaculate ball control and dexterity, and secondly, immense physical acceleration. Needless to say, Vinícius Júnior is blessed with both.

What gives Vinícius another edge is unpredictability. Which way is he going? Inside or outside? Some wingers have made their name doing one or the other very well. Vinícius is in the smaller, elite group that can do both.

For a player on the margins of victory and defeat, that’s invaluable.

In the example below, he turns his fullback inside out, by feigning a shot and going on the outside. 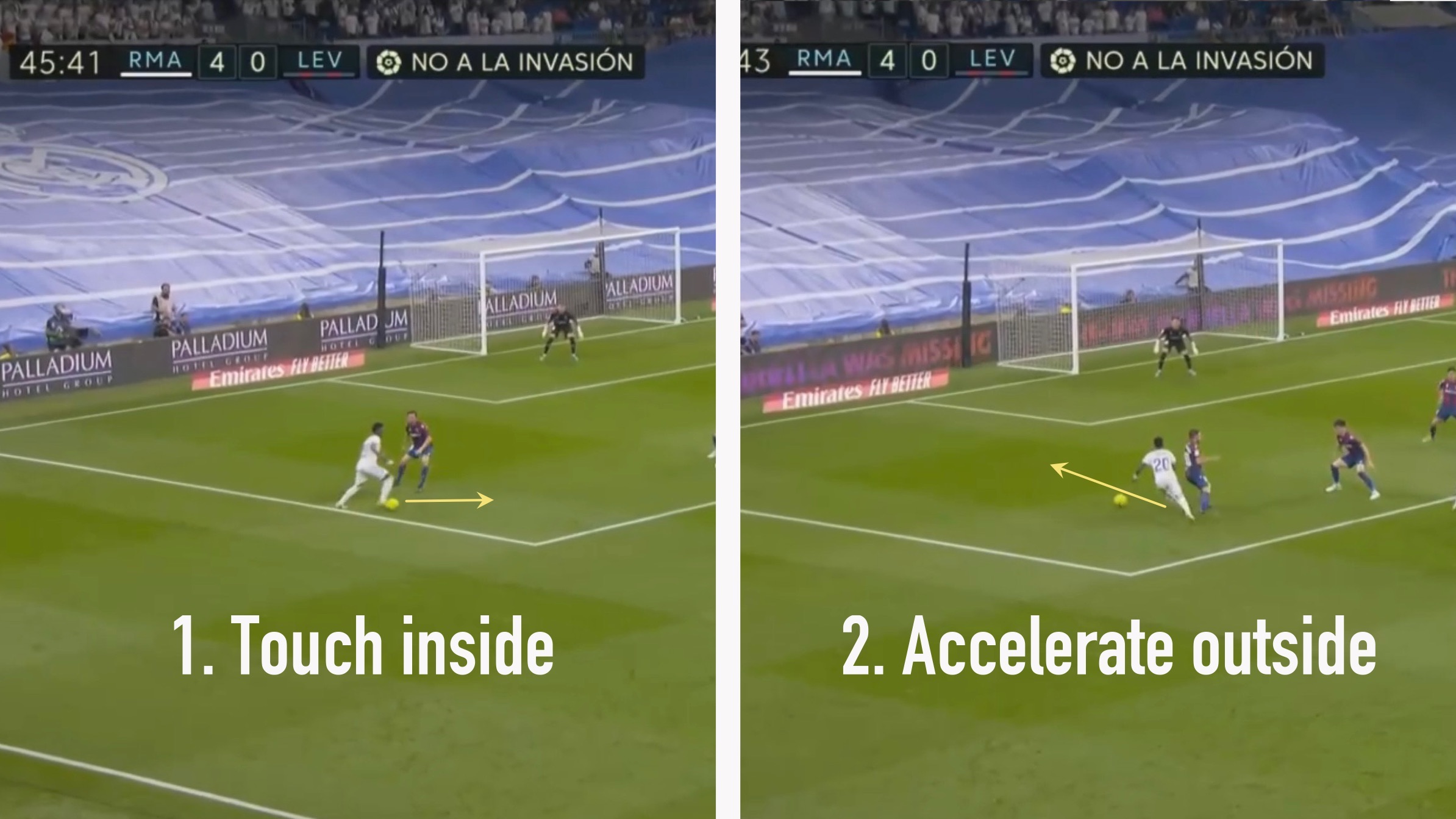 This necessitates another important quality: proficiency with both feet. As we move on to the next section, it becomes clear that using his left foot isn’t just a useful habit – but one of Vini’s most devastating attributes.

Of Vinicius’ 22 goals this season, seven of them have been with his left foot. That’s 31% – and it’s no coincidence.

With his regular off-the-shoulder runs, excelling in quick transitions, Vinicius often finds himself in the position below: 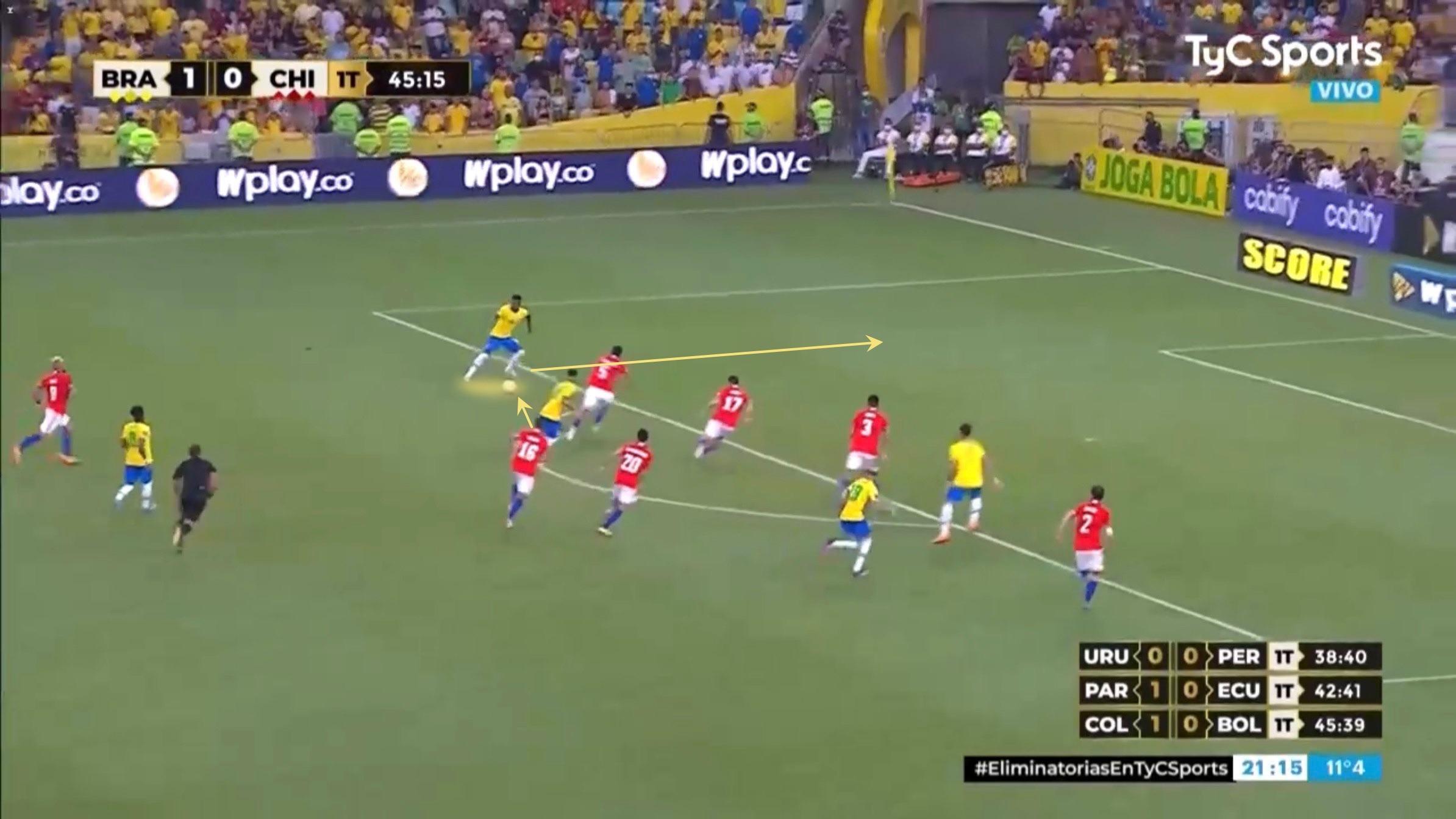 Using the same explosive two-touch dribbling, he will always drive towards the goal. From there, the Brazilian has become a specialist at finishing from this position with his left foot. 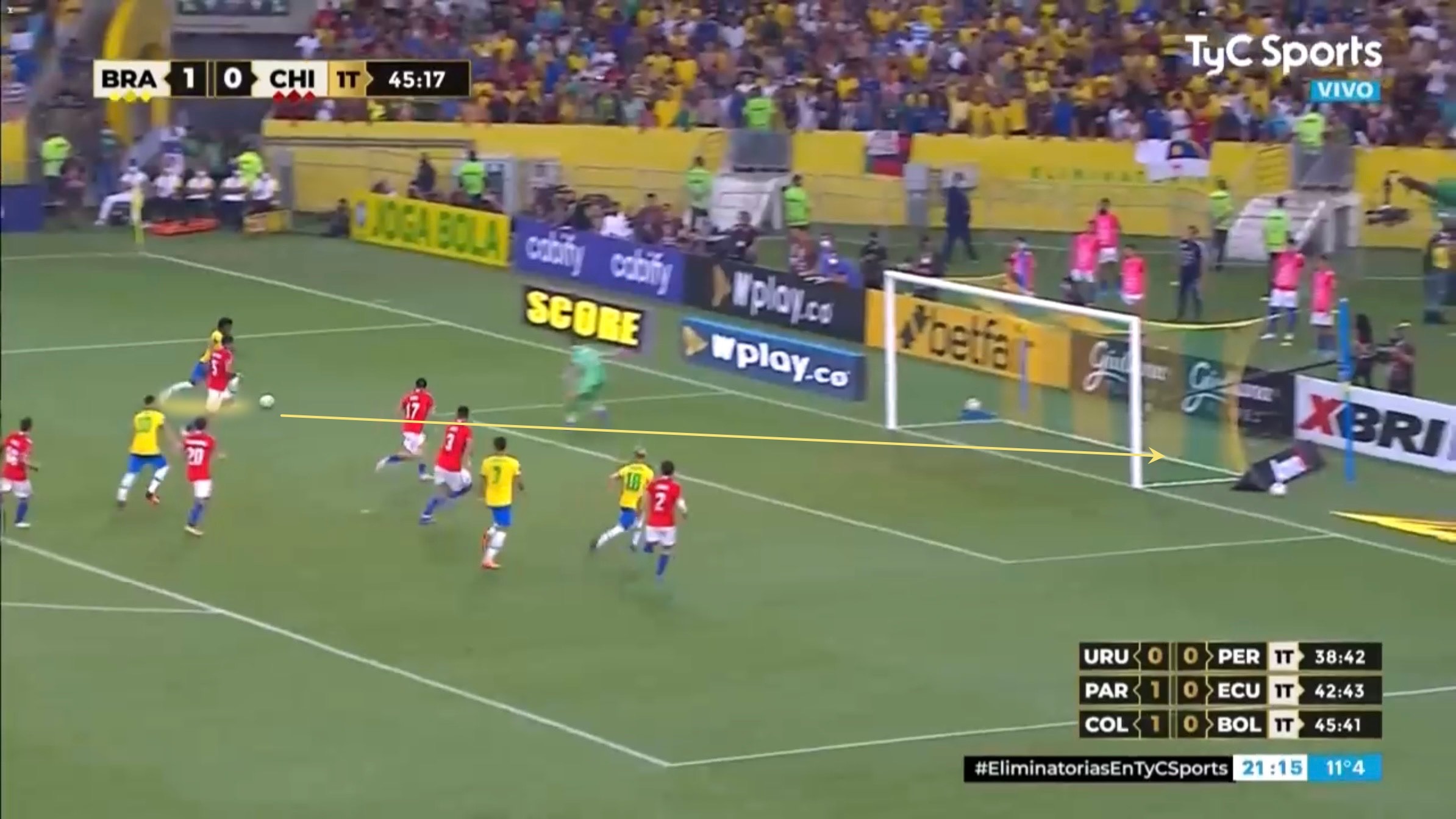 He most often goes low, sliding the ball across the keeper before they can get down. The consistency with which he executes this is frightening. It’s a significant reason for his exemplary goal return.

Whereas other ‘inverted’ wingers are reliant on cutting inside for their goals, Vinícius can go either way. And that makes him laborious to defend against.

But Vini’s goal-scoring prowess doesn’t stop there. Yet another facet he’s added to his game is a predatory instinct for goals. His ability to enter the box in a timely fashion, get on the wrong side of a defender and finish is particularly centre-forward-like.

In some cases, it’s all about timing. Vinícius remains notably wide even when his opposite winger (or full-back) has the ball, rather than come inside. As in the image below: 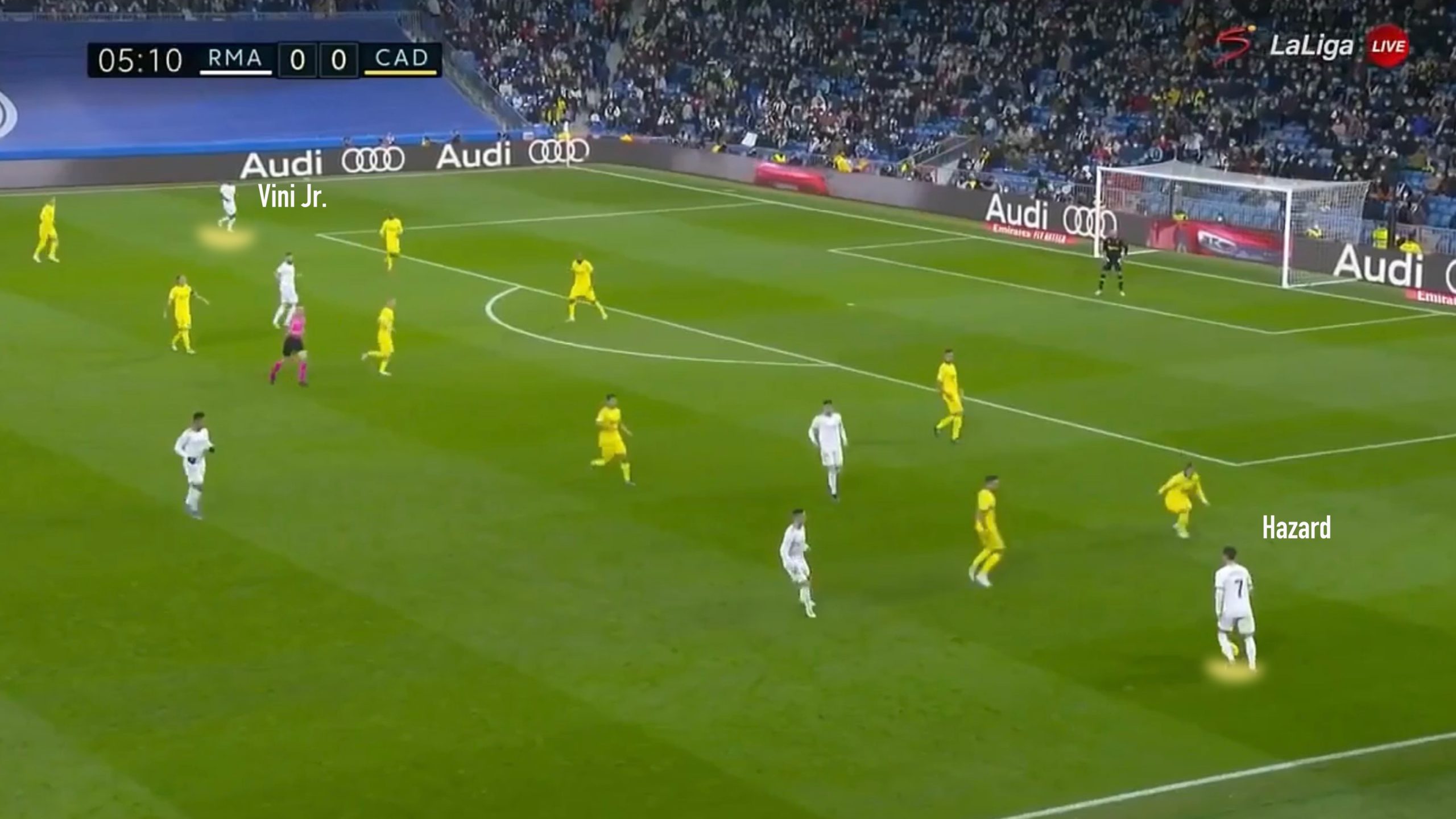 This gives the Brazilian the advantage of coming onto crosses. To react to their trajectory, rather than waiting in the box and expecting the perfect ball. It also allows him to blindside defenders, which we saw to full effect against Liverpool. 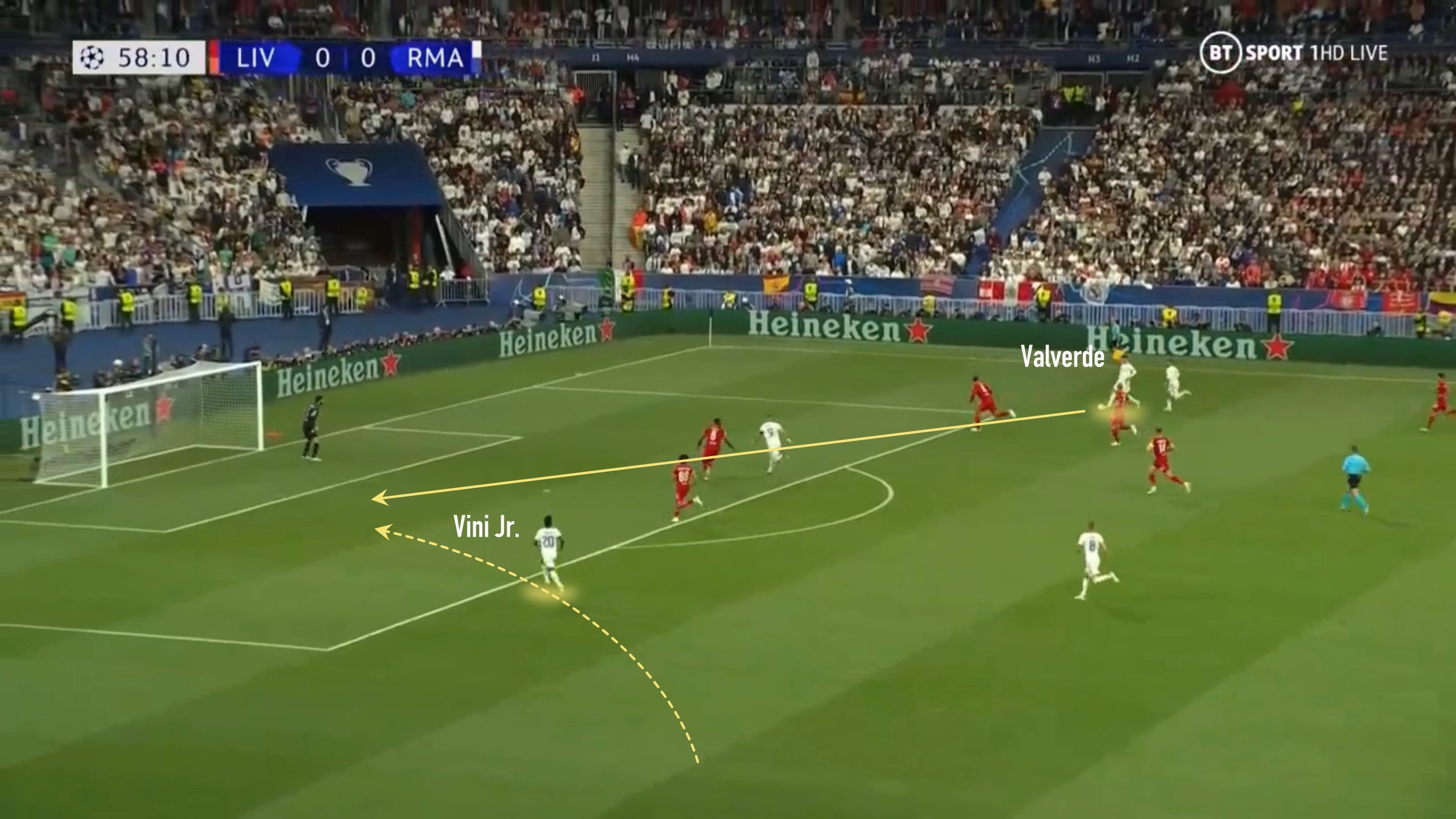 In other cases, Vini’s movement is more intricate. Here’s just one example, but a great one, of how comfortable he is in the 18-yard box. Running towards goal, he feigns to go to behind the defender, then checks his run and darts in the opposite direction for a cutback. The movement happens so seamlessly it appears second nature. 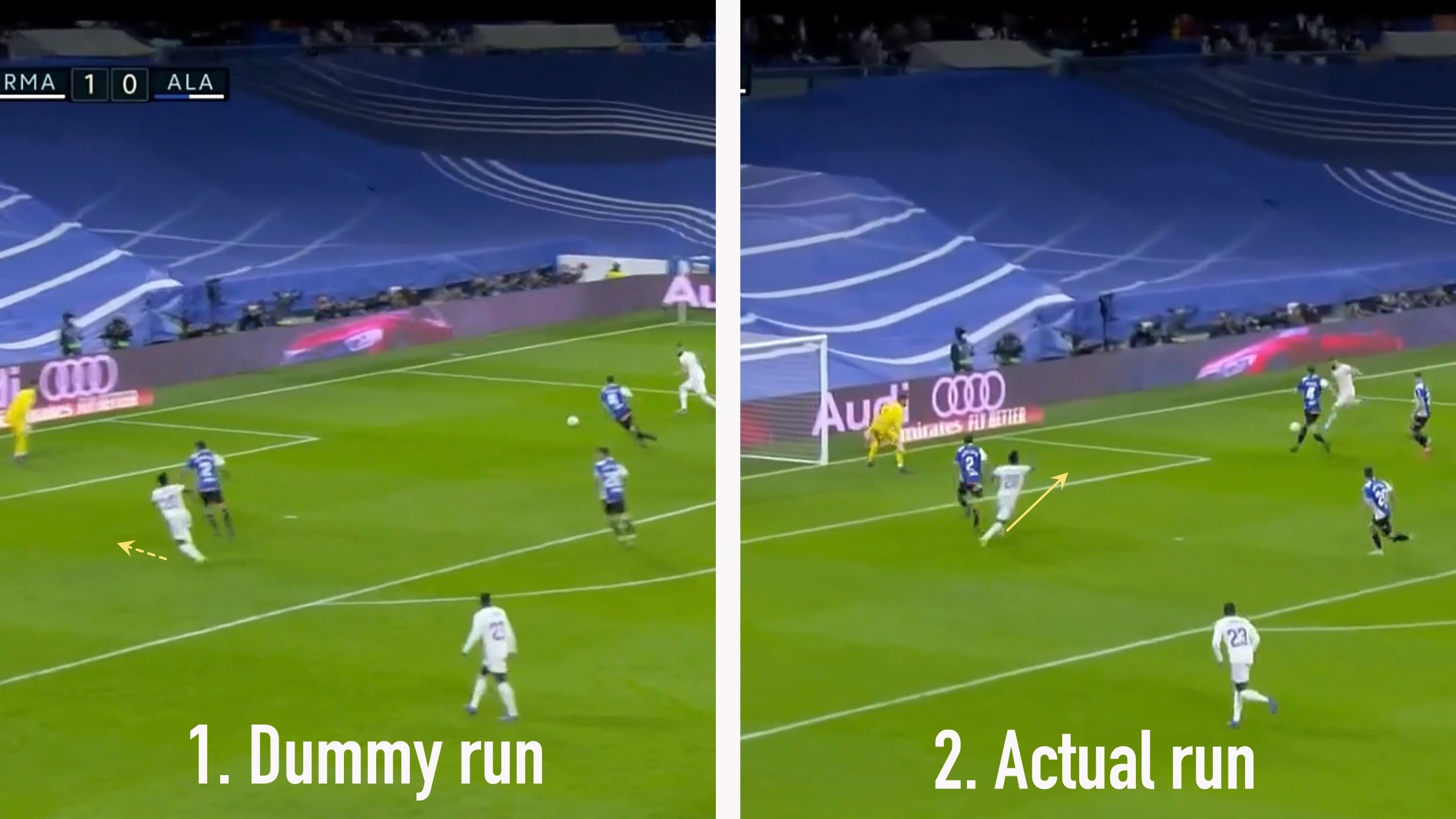 These types of goals, along with his left-foot finishes, account for the bulk of Vini’s tally this year. Nothing spectacular perhaps, but supremely effective. And more importantly, consistent.

It would be impossible to talk about Vinícius’ season without mentioning his partner in crime, Karim Benzema. Between them, they’ve scored 55% of Real Madrid’s La Liga goals this season. And if one scores, the other usually assists.

It’s easy to think of wingers purely as individuals. Players who rely on their own quality in isolation. But in reality, it’s often partnerships, like Vinícius-Benzema, that take a player’s output to another level. They understand each other’s movements, they know how to rotate positionally, and they can find each other even when outnumbered. It’s connections like these that create goals.

Take this pass from Vinícius. Cued only by a glance from Benzema, he loops it into him from an improbable position. 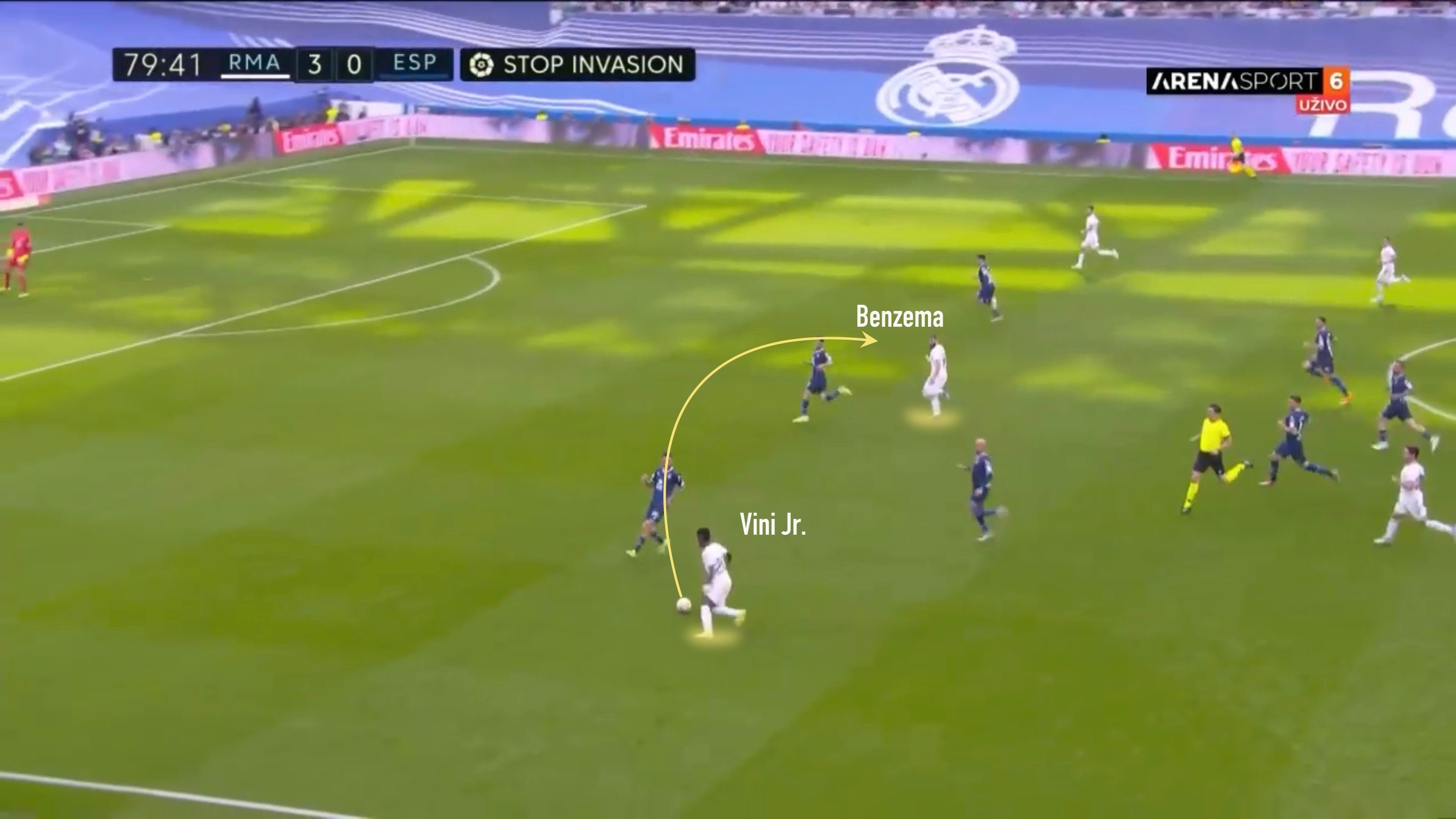 Or an equally difficult dink with his left foot, to find Benzema perfectly in stride as he enters the box. 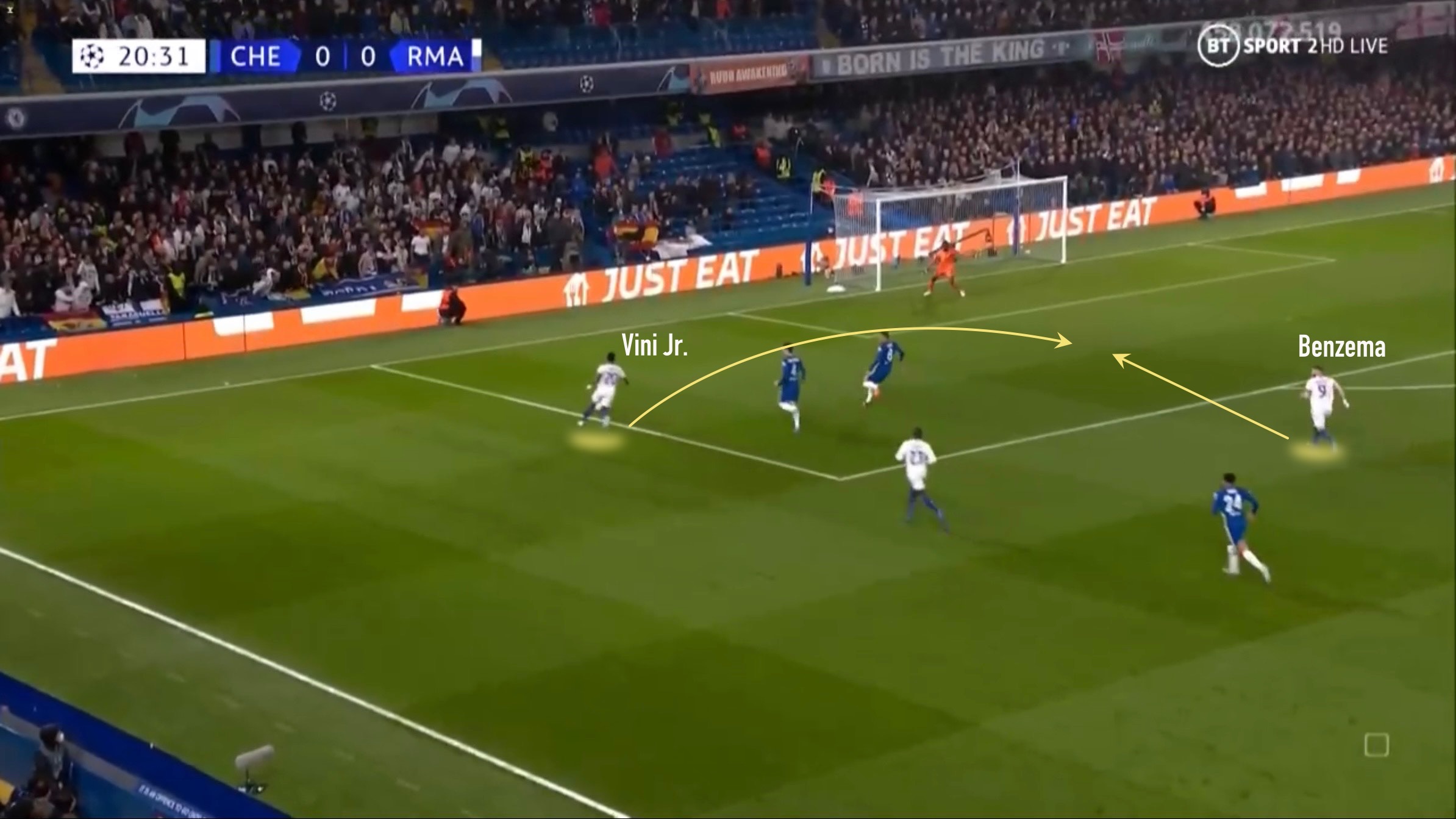 The examples go on and on. 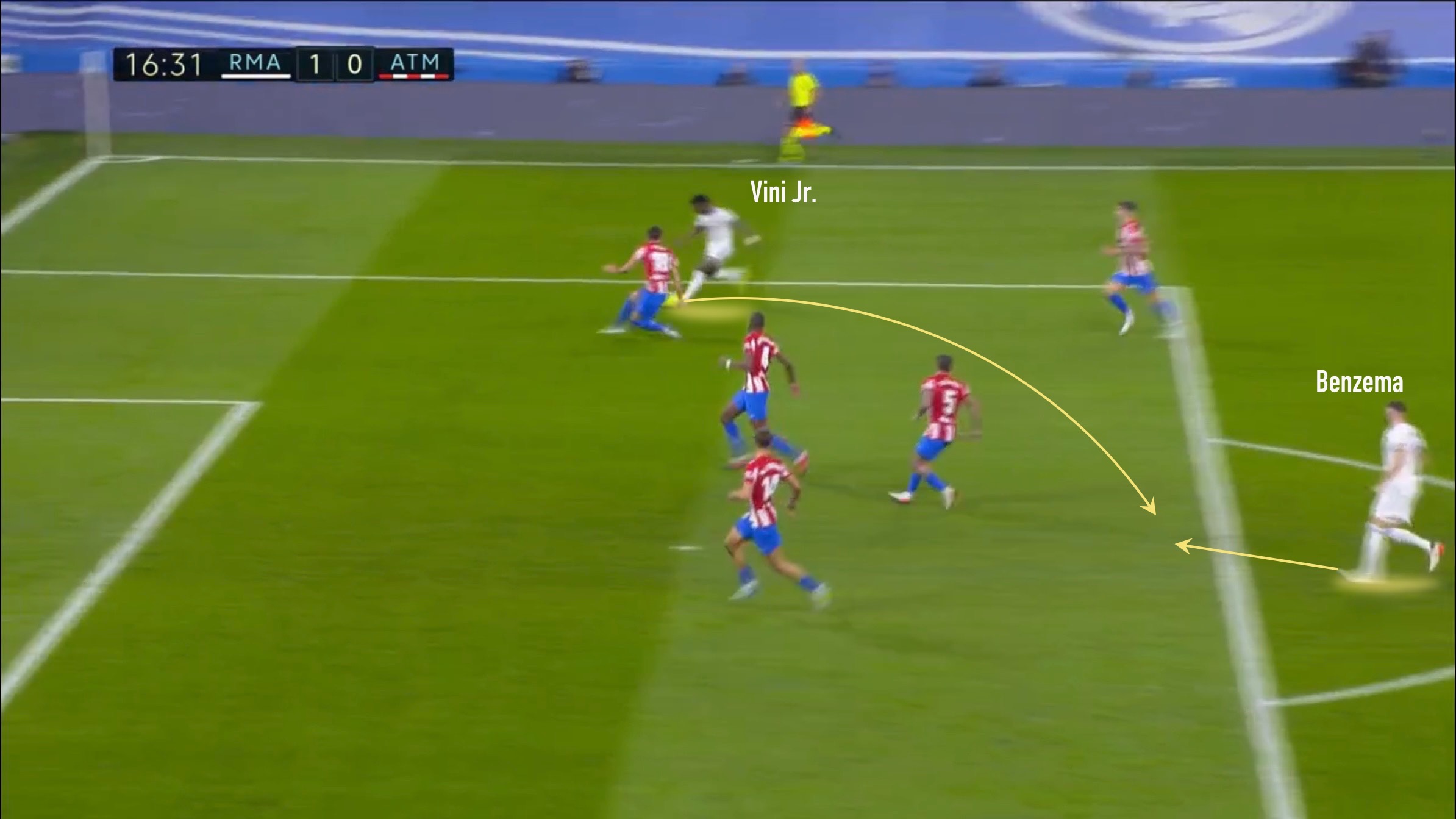 Without taking anything away from Vinícius, it’s clear his output would not be the same without a world-class centre forward beside him, in terms of both goals and assists. But to spin it the other way, the partnership is proof of Vinícius’ elite level. He has become a player who can support, and even improve, one of the best forwards in the world.

Conclusion – what’s next for Vini?

It’s easy to forget that Vinícius is only 21 years old. Like many Brazilians before him, he’s shown ability and maturity far beyond his age. What comes next, however, will always be interesting.

To repeat this season’s achievements will be difficult. To exceed them is monumental. But in a Real Madrid team that is ageing rapidly, he must strike a fine balance between consistency and adaptation.

Things are going to change around Vinícius. At some point, he will no longer be partnered with Benzema. Or have Luka Modríc behind him. What he does then, how his role changes, and how he steps up, will set the course for the rest of his career.

It might decide Real Madrid’s destiny for the next decade, too. 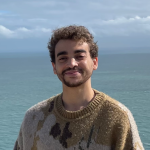 Football writer from Birmingham, UK. The only West Bromwich Albion fan with any remaining love for the sport.