Alex Neil took over the Sunderland job in February of this year, following the departure of Lee Johnson. Since then, the former Norwich City boss has taken charge of 18 Sunderland games, winning 10, drawing 7 and losing just one. This impressive record saw the Black Cats secure a place in the playoffs.

This tactical analysis will cover the tactics used by Alex Neil in the play-off semi-final matches and the play-off final. In this analysis, we will look at how Neil set his side up to beat Sheffield Wednesday and Wycombe Wanderers.

In the play-off semi-final, Sunderland took on Sheffield Wednesday. The first match at the Stadium of Light finished 1-0 for Sunderland. The second saw Sunderland equalise in the third minute of injury time making the game 1-1, to secure a place in the play-off final.

During the semi-final, Alex Neil set his side up in his preferred 4-2-3-1 formation. This formation allowed for Sunderland to build up from deep with the 2 holding midfielders dropping into the space left behind by the wide-spreading back 4. Neil’s men want to build up from the back and maintain possession. The two midfielders play on the same line as the fullbacks whilst building up. This allows for space to be created whilst giving the centre backs options to pass to. 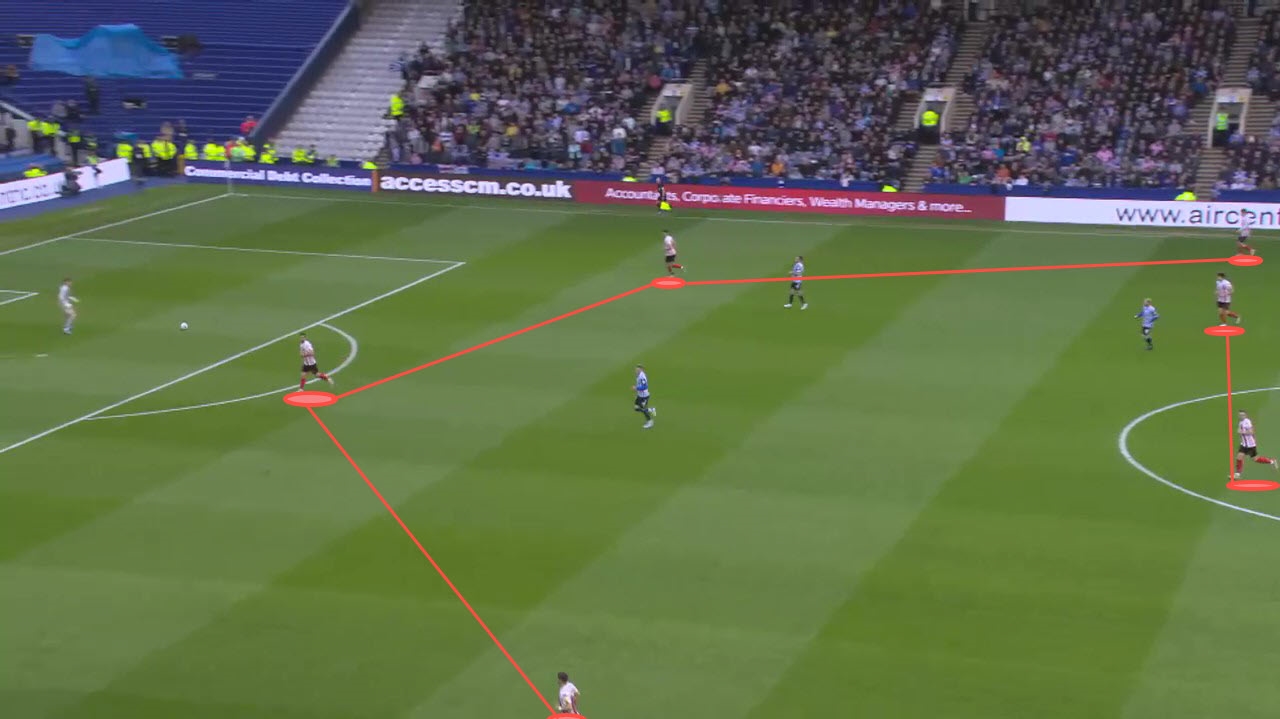 In possession, the Sunderland boss wants his midfielders to rotate between pulling wide and dropping centrally. In the semi-final, it was clear to see that Sunderland looked to capitalise on space out wide. on several occasions, a Sunderland midfielder pulled wide into the space usually occupied by a fullback. This caused a chain reaction of events which seemed to be drilled into Neil’s side. When the midfielder pulled wide, it caused the fullback to push extremely high, almost alongside the winger. This gave Sunderland a numerical overload out wide, where they favour attacking.

Alex Neil’s side had a clear method of attack when in possession. The aim was to create 1v1 situations for their direct wingers. Over the course of the 21/22 season, Sunderland averaged 31.94 1v1 dribbles per 90. This was the highest in the league and Sunderland wide men Jack Clarke and Patrick Roberts played an instrumental in this style of play.

In the photo below you can see Clarke isolating the Sheffield Wednesday fullback into a 1v1 situation, something that was a common theme over the two legs. To create these situations, the Sunderland attackers vacate the area and drag defenders with them to leave space for their wingers to attack. 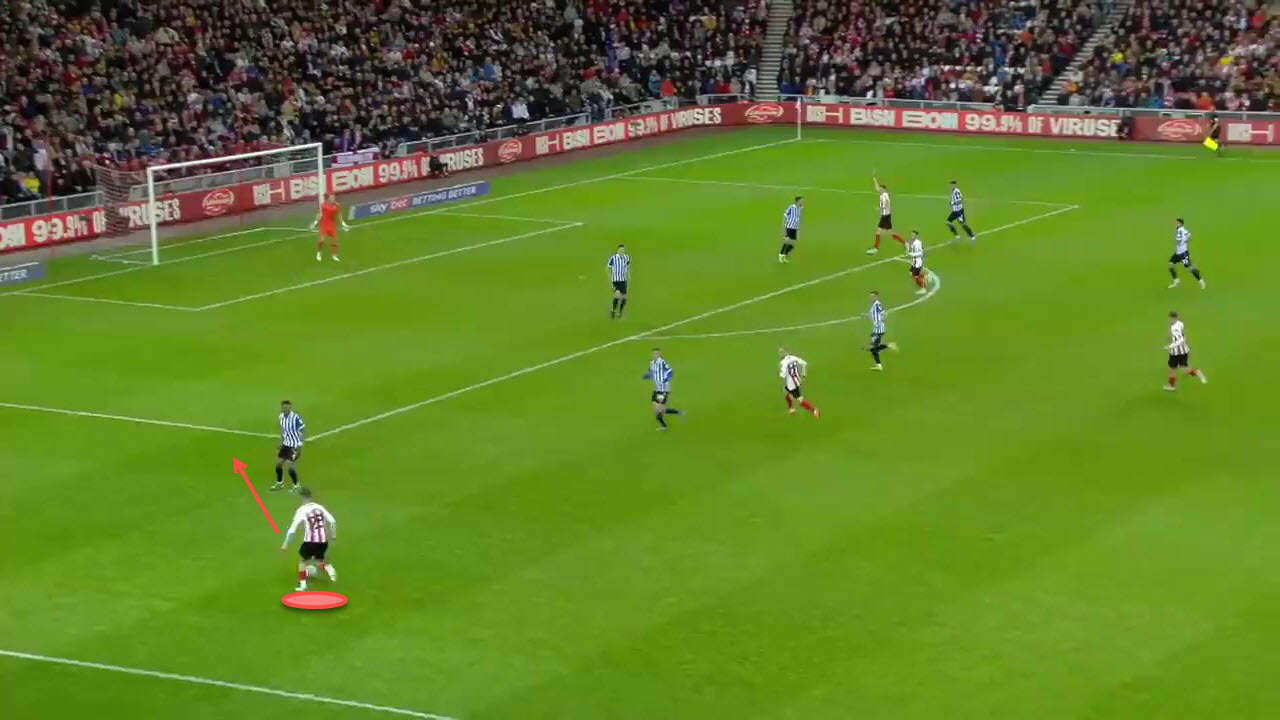 Out of possession in the semi-final, Neil set his side up to press relatively frequently. The press, instructed by Neil, disrupted Sheffield Wednesday’s ability to build up and often forced them long. Pressing in the 4-2-3-1 formation gives the striker a large amount of support behind as the three attackers can each join the press or mark an opposition player. Especially in the first leg this was a major success as Sheffield Wednesday only amassed 42.5% possession.

The key to Sunderland’s press was striker, Ross Stewart. His main job was to apply pressure to the goalkeeper whilst approaching from an angle. this way the goalkeeper was left with fewer options to pass to as Stuart had cut off one side. Below you can see the press in full flow with the supporting players and the roles they play. Sunderland knew that a long ball forwards would lead to a higher chance of regaining possession with Danny Batth and Bailey Wright at the heart of the defence. 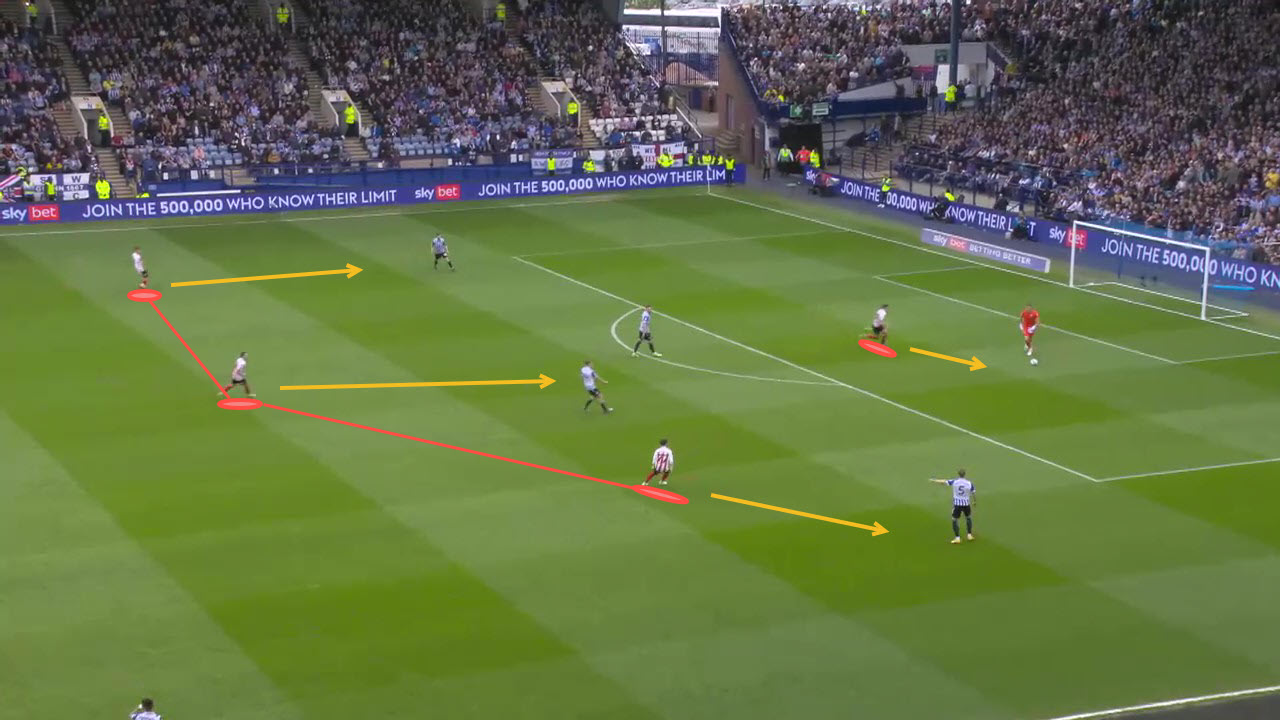 In both playoff semi-final legs, Neil implemented a formation change towards the end of the second half. He set his side out into a new formation, the 3-4-3. This formation matched that of Sheffield Wednesday whilst it also provided extra defensive cover as the use of wingbacks and wingers completely nullified any wide threat.

Neil’s defensive transition will be considered something of the past considering how many teams look to ‘counter-press’. The Sunderland boss wants his side to regain numerical superiority or defensive shape before making a tackle to dispossess the opposition. This method is something which is clearly worked on by Neil as Sunderland are rarely caught out with a counterattack.

Neil wants his team to delay and hold up the play. To do this his side must be disciplined in recovering and supporting their teammates. As seen below the Sunderland players can be seen to not be applying direct pressure on the opposition but are waiting for support before they make a tackle. By doing this, the risk of being beaten 1v1 is massively reduced and the chances of recovery are high. 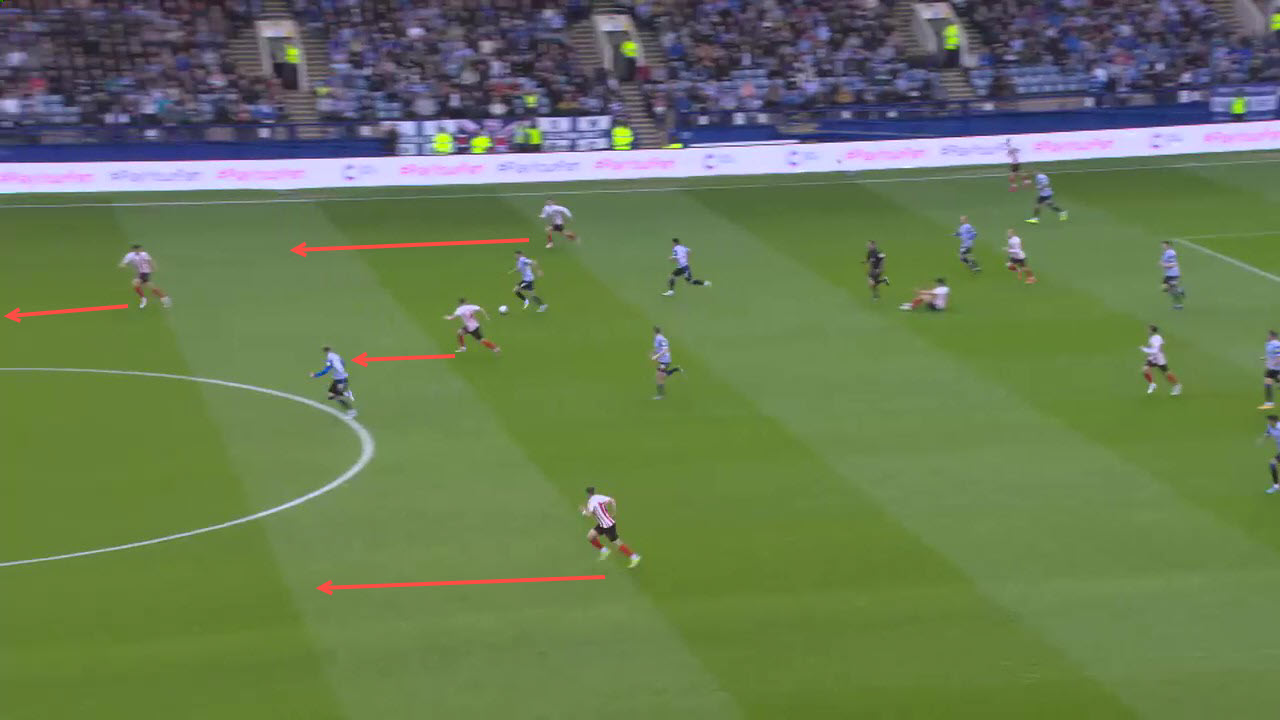 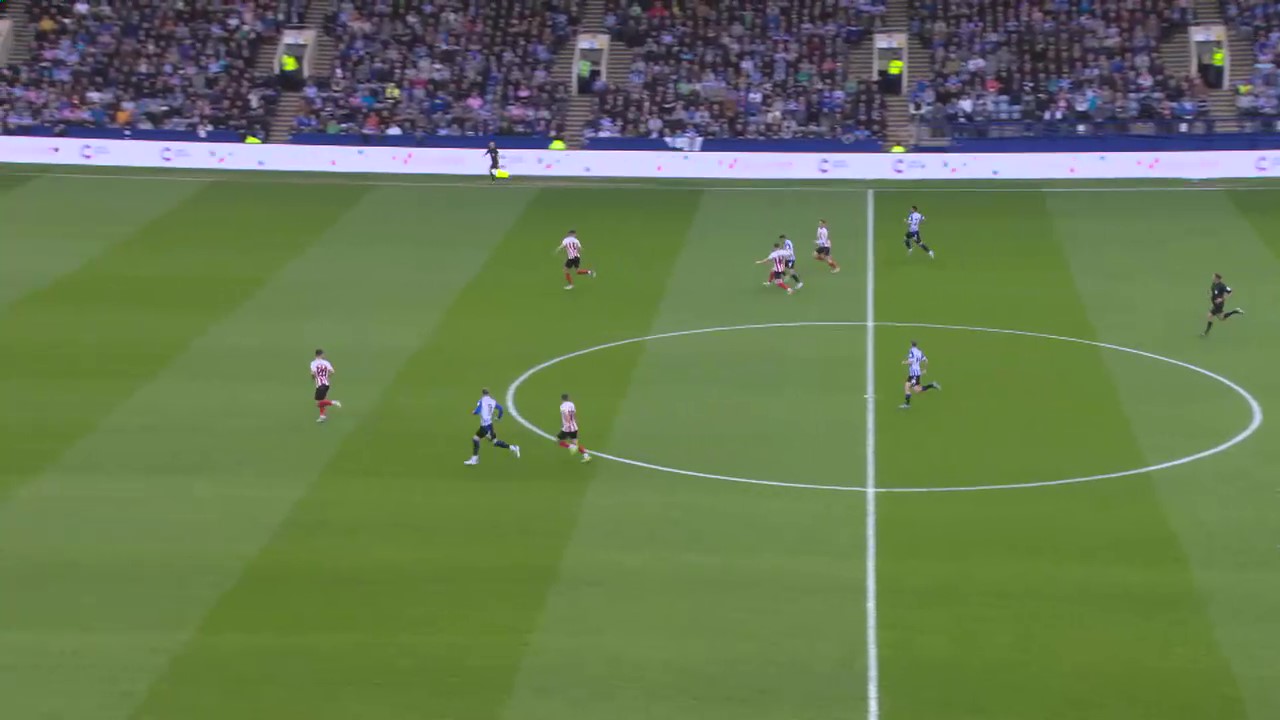 Furthermore, if the transition progresses and is not concluded quickly Sunderland are very good at rapidly regaining shape and having numerical advantages. Against Sheffield Wednesday, it was important to not take any risks on transition as they have the quality to punish sides, particularly with star man Barry Bannan.

The playoff final between Sunderland and Wycombe Wanderers was going to be a highly-contested affair following a 3-3 draw in the league in January. Sunderland ran out 2-0 winners and Alex Neil secured promotion back to the Championship.

In the final Sunderland used different tactics than those deployed against Sheffield Wednesday. The addition of Eliot Embleton over out and out winger Clarke brought more balance to Sunderland’s midfield. The number 8 was Neil’s key man in the playoff final as he was brought in to nullify Wycombe’s right-hand side.

In possession, Sunderland played with what seemed like two strikers. Pritchard joined Stewart to occupy the Wycombe defence. Embleton drifted centrally to take the space left by Pritchard which allowed for athletic fullback Cirkin to roam forwards into space. Below are the average positions of the Sunderland starting eleven for the playoff final. 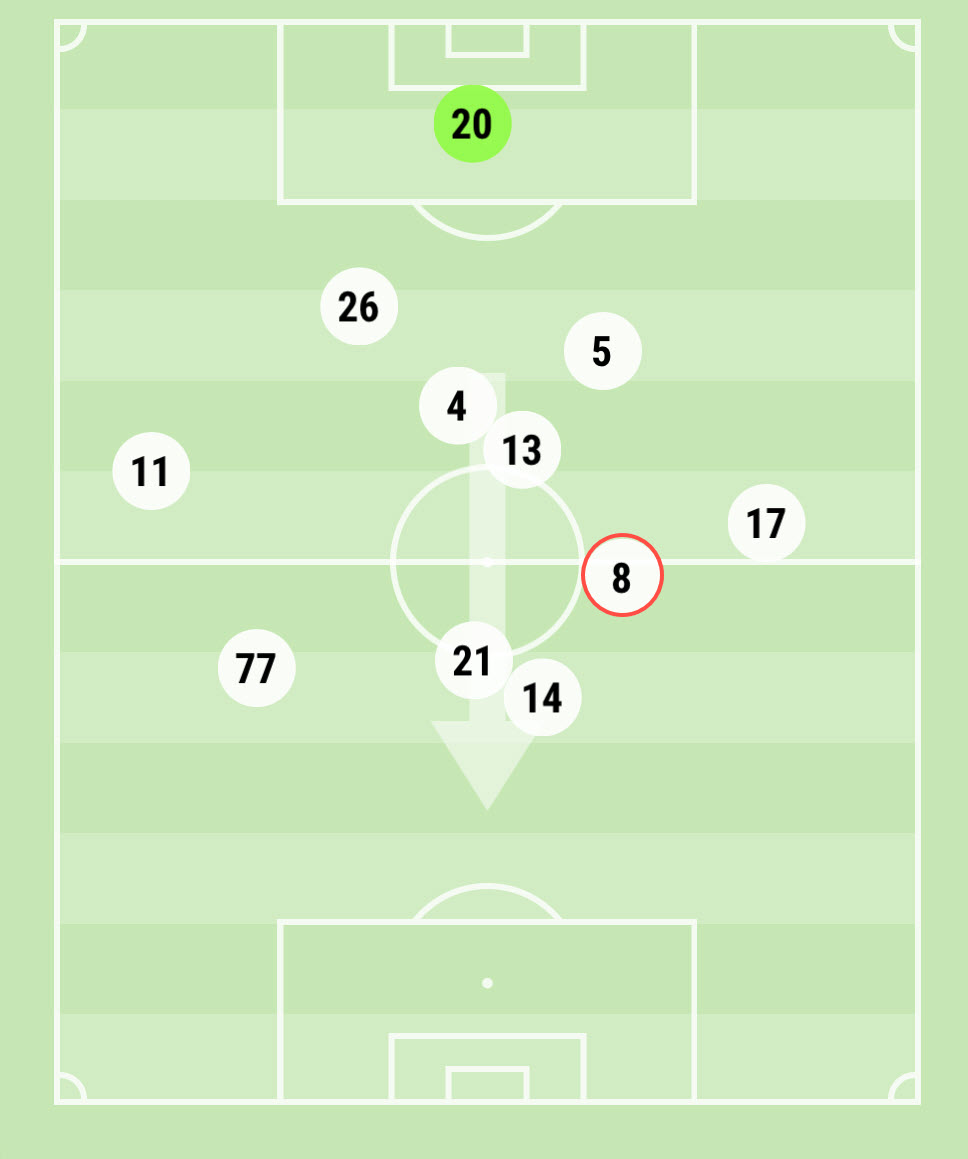 Below is the perfect example of how Alex Neil’s tactics worked effectively and provided space for Cirkin down the left. The introduction of Embleton provided midfield superiority against Wycombe as he naturally drifted central creating almost a midfield three. This gave Sunderland a balance of attacking flair but also discipline in key areas. Neil’s tactics and big call to leave out Clarke paid off as Embleton scored the first goal, from a central position. 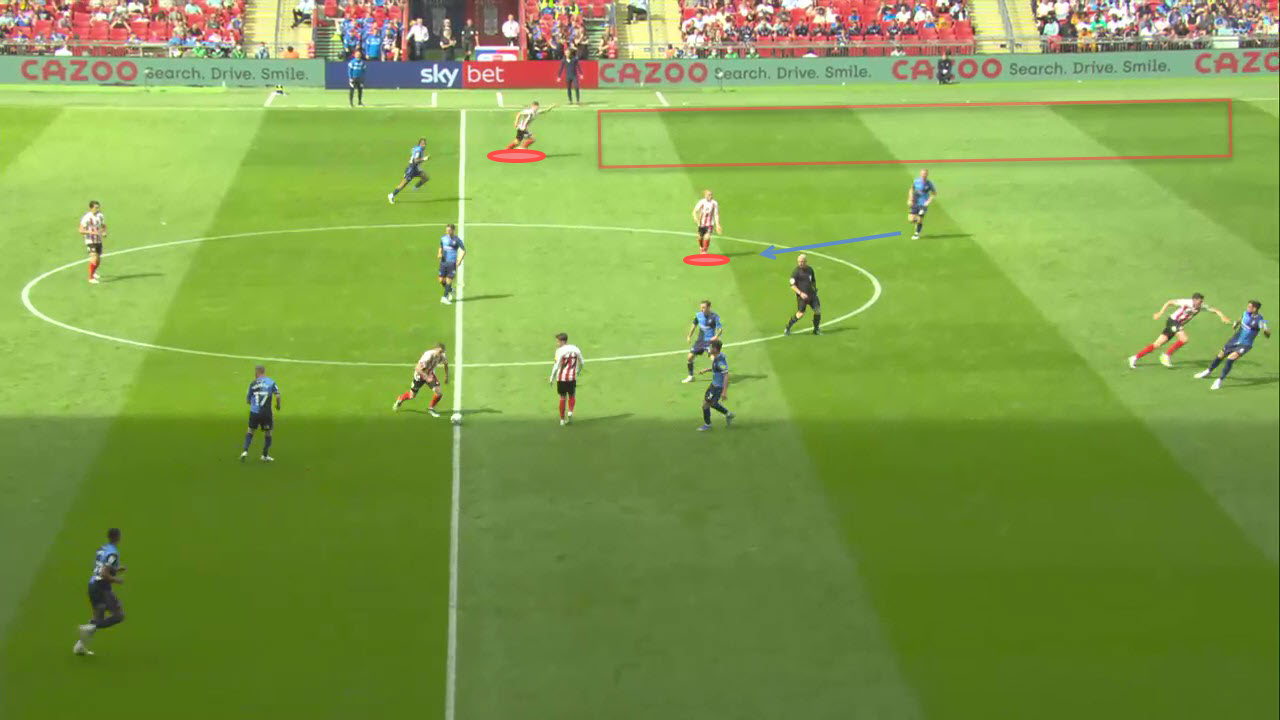 Perhaps as important as Embleton, was the work of the former Manchester City and Celtic winger Roberts. The winger averages 11.6 dribbles per 90, making him one of the most direct wide-men in English football. His style of play was utilised in the final as Neil set his side up to flood the box with players. Creating chances out wide for Roberts gave Sunderland a clear way to attack the danger zone. With the striker and two other attacking players arriving in the penalty area along with a midfield player, Sunderland matched Wycombe’s defence man for man. 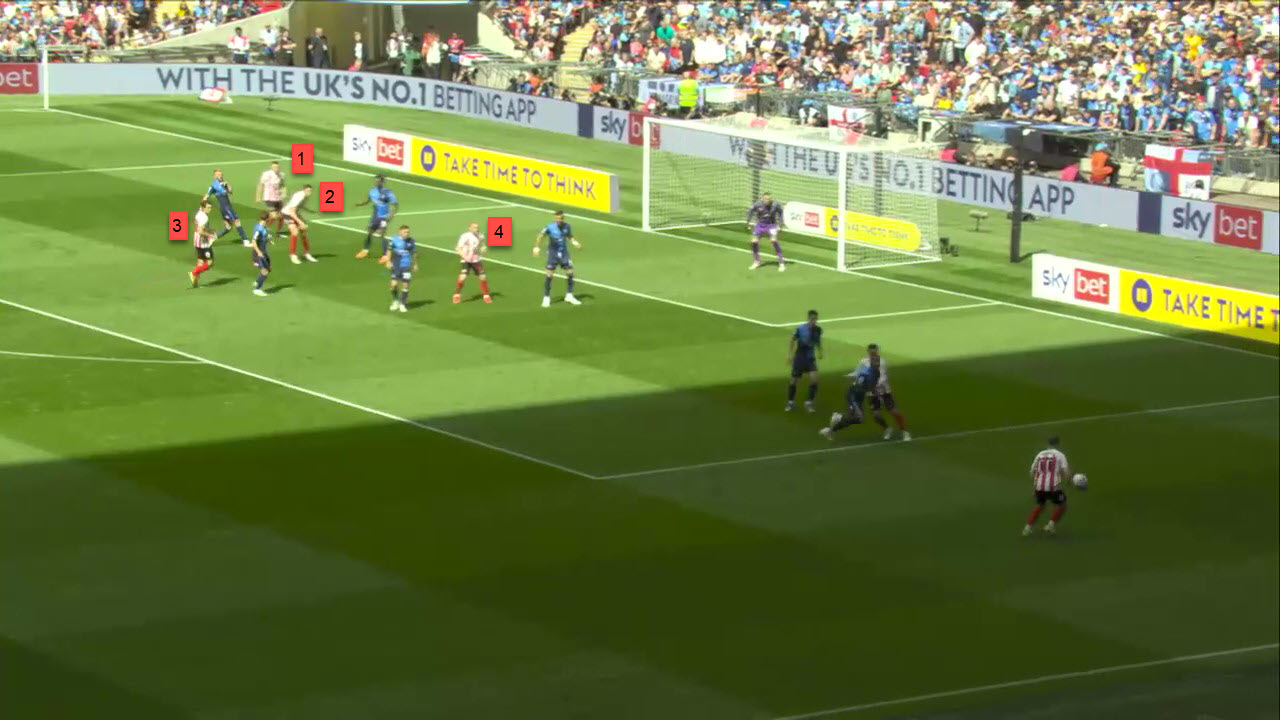 Out of possession, Sunderland approached the game differently to the semi-final. The difference again was Embleton. Defensively, Sunderland faced an attacking bombardment down their left-hand side. Wycombe overloaded their right-hand side to try and create chances from there. Below are the average positions of Wycombe Wanderers in the play-off final. 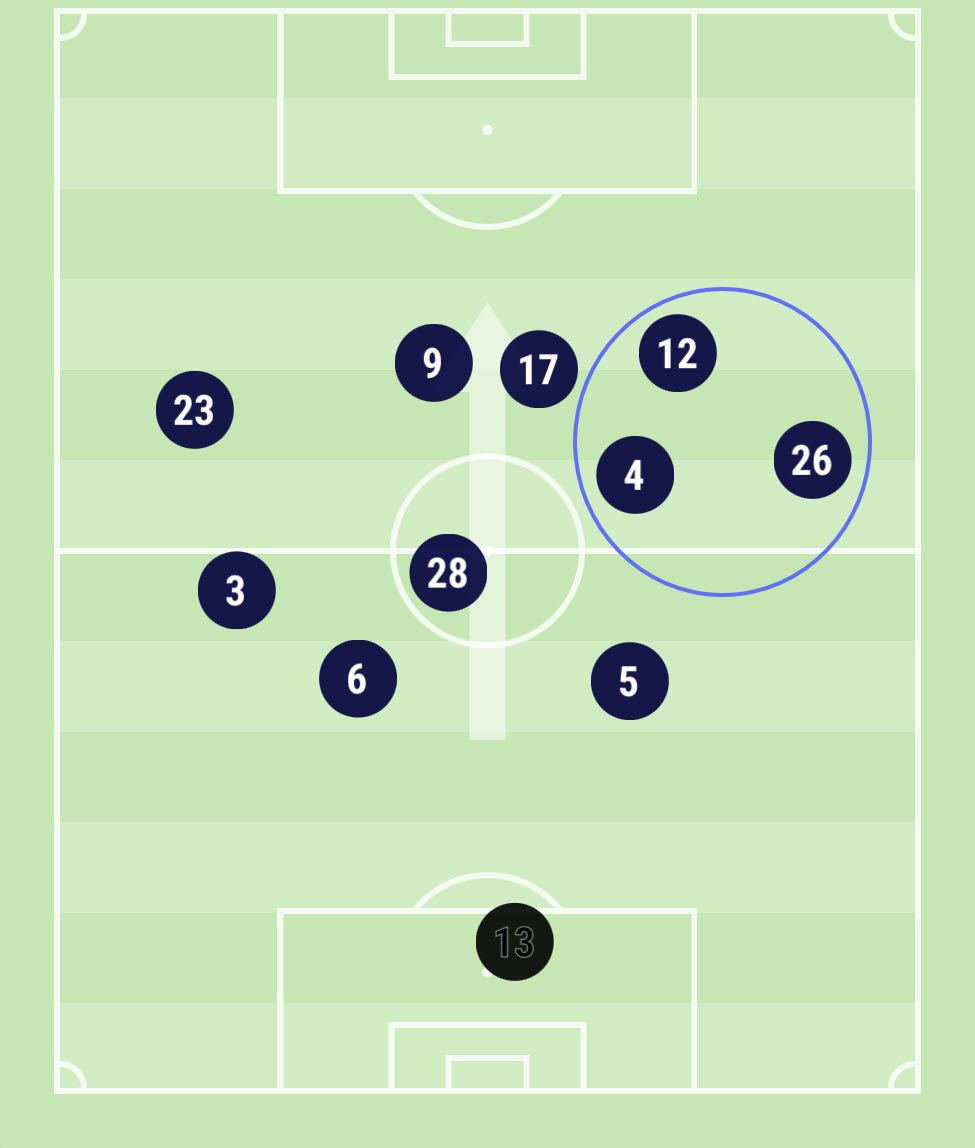 The former Preston North End boss had done his homework and was wise to this. The choice to bring Embleton into his side helped prevent any issues. Out of possession, Sunderland sat deep playing a mid-block/ low-block. By doing this, the Black Cats frustrated Wycombe and prevented them from having only 3 shots on target.

Embleton dropped much deeper than the other midfielders and filled in as a wingback to create what was a back five. This was to prevent the overload created by Wycombe and help protect Cirkin. Highlighted below is Embleton who marks the Wycombe wide man allowing Cirkin to play much more narrow alongside his centre backs. In doing so, it made Neil’s men much more compact and rigid as there were no gaps between the defenders. Embleton had to work hard and remain disciplined and ultimately he repaid his manager with a standout performance. 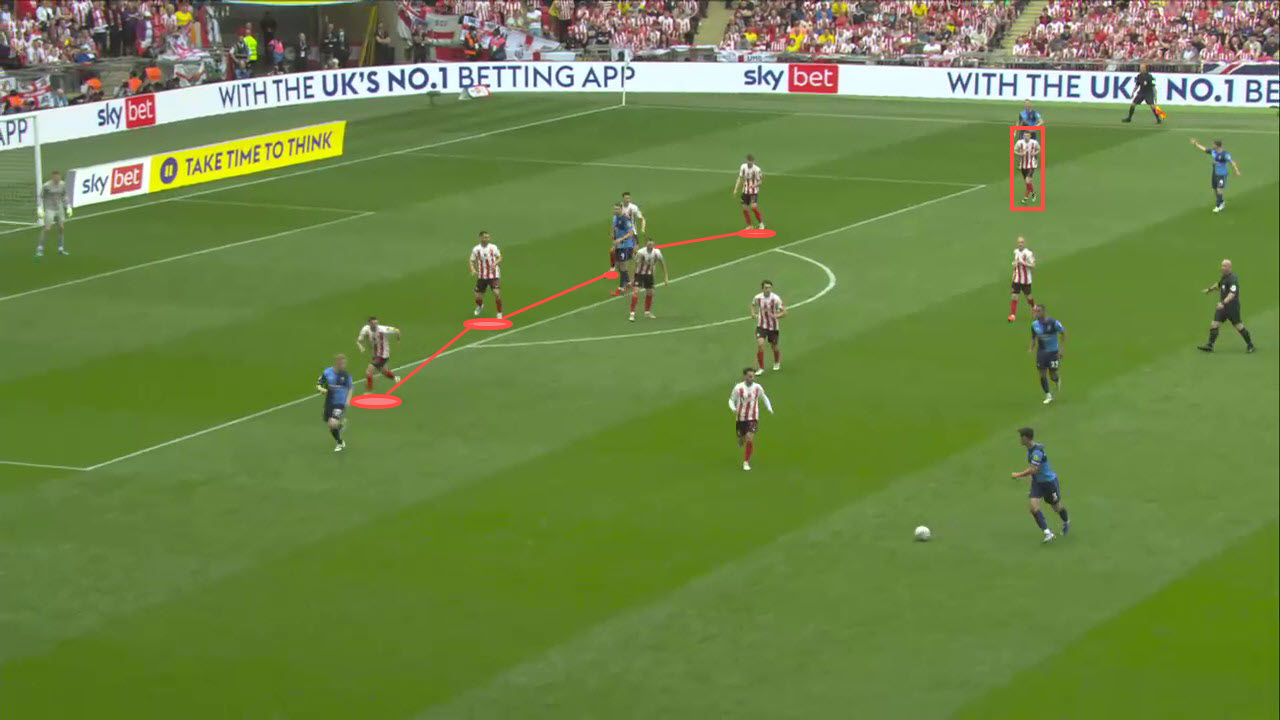 Overall, Neil comfortably guided his side to play-off success. His tactical nous and understanding of the game enabled him to outperform his opposition and win Sunderland promotion. Sunderland will now be looking to next season in the Championship with great hope and expectation, following Neil’s impressive record since he took over.

Sunderland fans can be excited for their first season back in the championship since 2018. Alex Neil’s experience in the league should see them have a comfortable season. Along with this, a busy summer transfer window as the club have released 16 first-team players. All in all, the Scot’s experience and game management saw a successful playoff campaign return the Wearsiders to the second division of English football.