After sacking both Jack Ross and Shaun Maloney last season, Hibernian announced the appointment of Lee Johnson as their new manager last week.

Ross and Maloney both lost their jobs during a disappointing 21/22 campaign for the Edinburgh side, which saw them finish in the bottom six of the Scottish Premiership.

Johnson, who has managed Oldham, Barnsley, Bristol City, and most recently, Sunderland, is now the man tasked with turning things around at Easter Road.

With playing experience in the Scottish game, including with Hibs’ fierce rivals Hearts for a short spell, Johnson made over 450 appearances as a player before being appointed manager of Oldham at just 31.

He followed his first job at Oldham with a spell at Barnsley before consolidating Bristol City as an EFL Championship club over four seasons, as well as guiding them on a memorable run to the EFL Cup semi-finals in 2018 which saw them knock out Jose Mourinho’s Manchester United.

His latest spell in the dugout came at the Stadium of Light where he helped EFL League One Sunderland to their first piece of silverware in 14 years, winning the EFL Trophy at Wembley. He also guided the Black Cats to a Play-Off position last season but departed Wearside earlier this year with the club just outside this season’s automatic promotion places.

This tactical analysis will look at some aspects of Johnson’s tactics from his previous jobs, particularly his recent spell at Sunderland, to see how Hibernian could line up next season, analysing his approach to the game in both attack and defence.

All data used throughout this analysis is taken from Wyscout.

At Bristol City, Johnson favoured a traditional 4-4-2 system, a variation of which he used to great effect to orchestrate that famous win over Manchester United in the EFL Cup.

However, last season at Sunderland Johnson primarily used a 4-2-3-1 shape but also used several other formations, including a 4-3-1-2. As he has mentioned in interviews, Johnson emphasises a balance of the individual qualities of his players against the strengths and weaknesses of his opponent, rather than being tied to one formation.

Although he is flexible in his formations, Johnson’s tactics, as we will see in this analysis, are attacking, but still with a focus on organisation.

Sunderland’s build-up under Johnson last season varied. In the initial build-up, centre-backs would split wide when the goalkeeper was in possession, if they received from the goalkeeper, they would then have a couple of options to progress the ball. Firstly, in the wide areas where they would play out to full-back to carry up the line and combine with the winger on their side, who would hold their width.

Or more centrally, again playing out to a full-back, wingers would stay wide and with the double pivot giving numbers in the middle, the ‘10’, often Alex Pritchard, would drop deep into the channels to combine with the full-backs. This would create space in behind for midfield runners, and striker Ross Stewart to attack into. 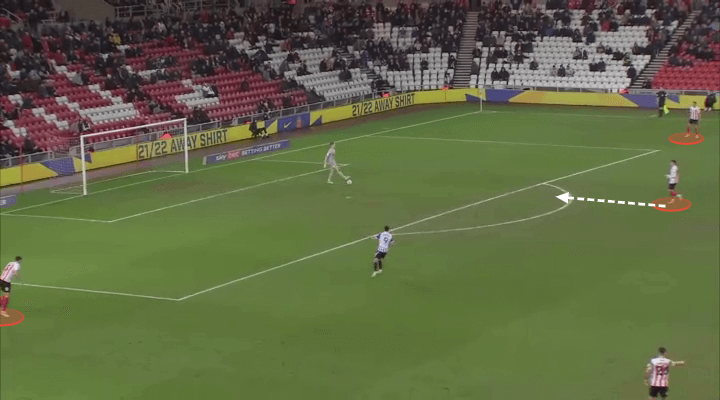 In this example against Sheffield Wednesday, we can see just how wide the centre-backs are, with the right-back also taking a wide, and high, starting position. In this build-up, one of the two holding midfielders drops into between the centre-backs with the other holding midfielders and the ‘10’ taking up positions on either side in the inside channels. On this occasion, the goalkeeper plays through the line and finds Pritchard who has dropped from his ’10’ position. Pritchard then plays the first-time ball out to the right-back, already in an advanced position just inside the Sunderland half. 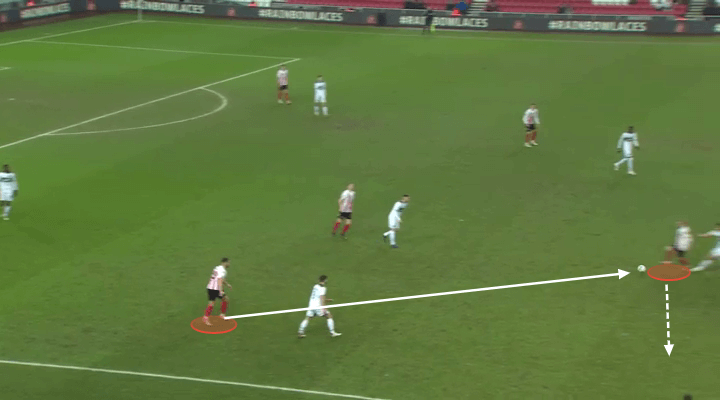 In this next still, from a game against Plymouth, we can see an example of Pritchard dropping deep from the ‘10’ position to receive the ball from Wright at right-back. To progress at this stage, Pritchard then looks to turn quickly and carry centrally or drop back off to Wright first-time who would then look to quickly play down the line into the channel for either the right-winger, Dajaku, or Stewart who would drift across from centre forward position. 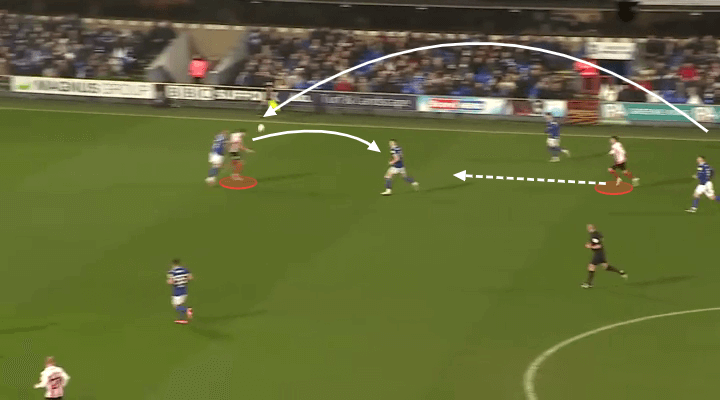 This next example shows a typical ball from the full-back area down the channel for Stewart who has drifted into the flank. The ball is headed down and we see a midfielder runner coming inside to latch onto Stewart’s knock-down.

Although out injured until November, Hibs’ striker Kevin Nesbit has a similar profile to Stewart, tall and athletic, runs the channels well and can use his body to protect the ball, so Johnson may well look to utilise Nesbitt in a similar way at Easter Road.

What can be seen throughout Sunderland’s build-up and progression under Johnson, is a quick, direct style of play. Whether it is up to the striker with midfield runners attacking the space beyond, or midfielders dropping deep to link, players take minimal touches and move through the thirds at speed.

Once progressed into the final third, a big part of Johnson’s attacking play at Sunderland last season was the interplay between the winger and the full-back. As we’ve already seen, Johnson positions his full-backs quite high, which allows them to quickly join in the attacks. 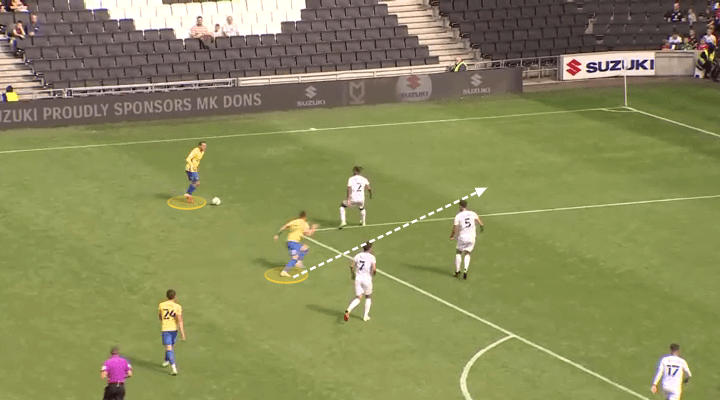 In this first example from the early part of last season, we see Aiden McGeady in the left-wing position facing up the right-back. Left-back Dennis Cirkin is also highlighted. Cirkin makes the underlapping run beyond the midfielder, dragging the MK Dons centre-back into a deeper position. This then allows McGeady to advance closer to the box and opens a corridor of space for a cross between the right-back and the centre-back which is converted in the box by Stewart. 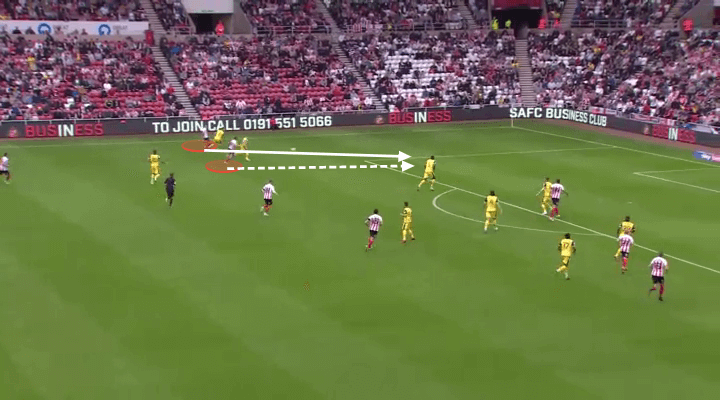 In this next example, Cirkin combines with Elliot Embleton in the left-wing position in a home game against Bolton. This time we see Cirkin play a one-two and again carry on an underlapping run in behind. Cirkin carries to the by-line, crossing low for his opposite full-back Carl Winchester, who advanced into the box at the back post, to score.

In this next still, from the same phase of play, we see another hallmark of Johnson’s teams, lots of players attacking the box. 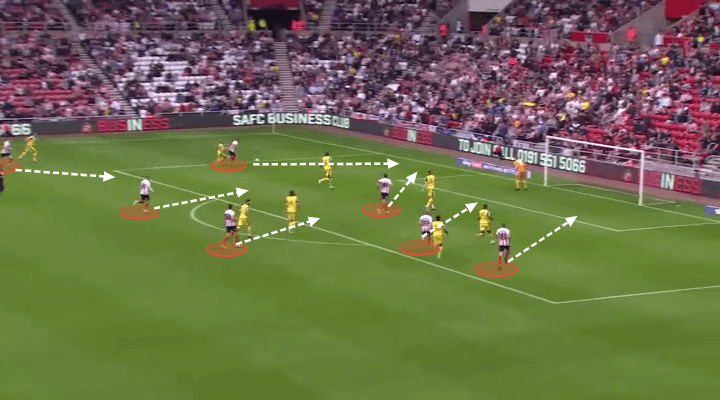 As mentioned, it is opposite full-back Winchester who receives the cross to score but there are plenty of other options for Cirkin to pick out when he hits the by-line. As well as Winchester attacking the back post, Pritchard is attacking the middle of the goal, Stewart has gone to the front post and there are two players making runs at the edge of the box offering for a cut-back. Embleton also continues his run after playing Cirkin in, making a total of six players that are looking to get into the box. 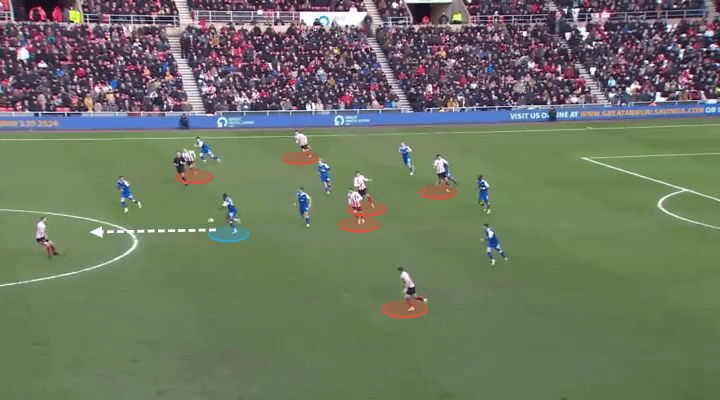 An example, from their home game against Doncaster, can be seen here. Sunderland are progressing centrally through the middle third, but the play breaks down and six players are beyond the ball as Doncaster win possession.

Doncaster are then able to quickly exploit this, attacking the space in the middle before a quick one-two sees Griffiths, highlighted in blue, run in behind their high line and through to beat the goalkeeper 1v1. 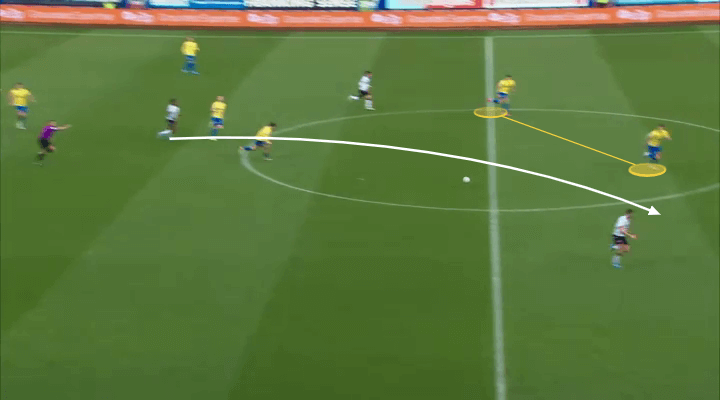 In Johnson’s final game in charge, a heavy 6-0 defeat away at Bolton, we can see another example of just how exposed Sunderland’s centre-backs could be in transition. In this example, their attack has broken down on the edge of the box. They attempt to win the ball back high, but Bolton quickly break and play the ball down the flank, attacking the space left by both full-backs who have advanced to join the attack.

With Johnson unlikely to alter his attacking play too much, Hibs will need to ensure they have quick and mobile defenders in their squad, particularly at centre-back.

It does already look like they are recruiting for exactly that profile early in the summer window, with former Leeds United prospect Nohan Kenneh, a powerful and quick centre-back, who can also play defensive midfield, announced as one of Johnson’s first signings this week.

Johnson will look to implement a high-intensity press at Easter Road. Analysing his team’s PPDA (passes allowed per defensive action), a proxy of defensive intensity, they have often been below the league average. 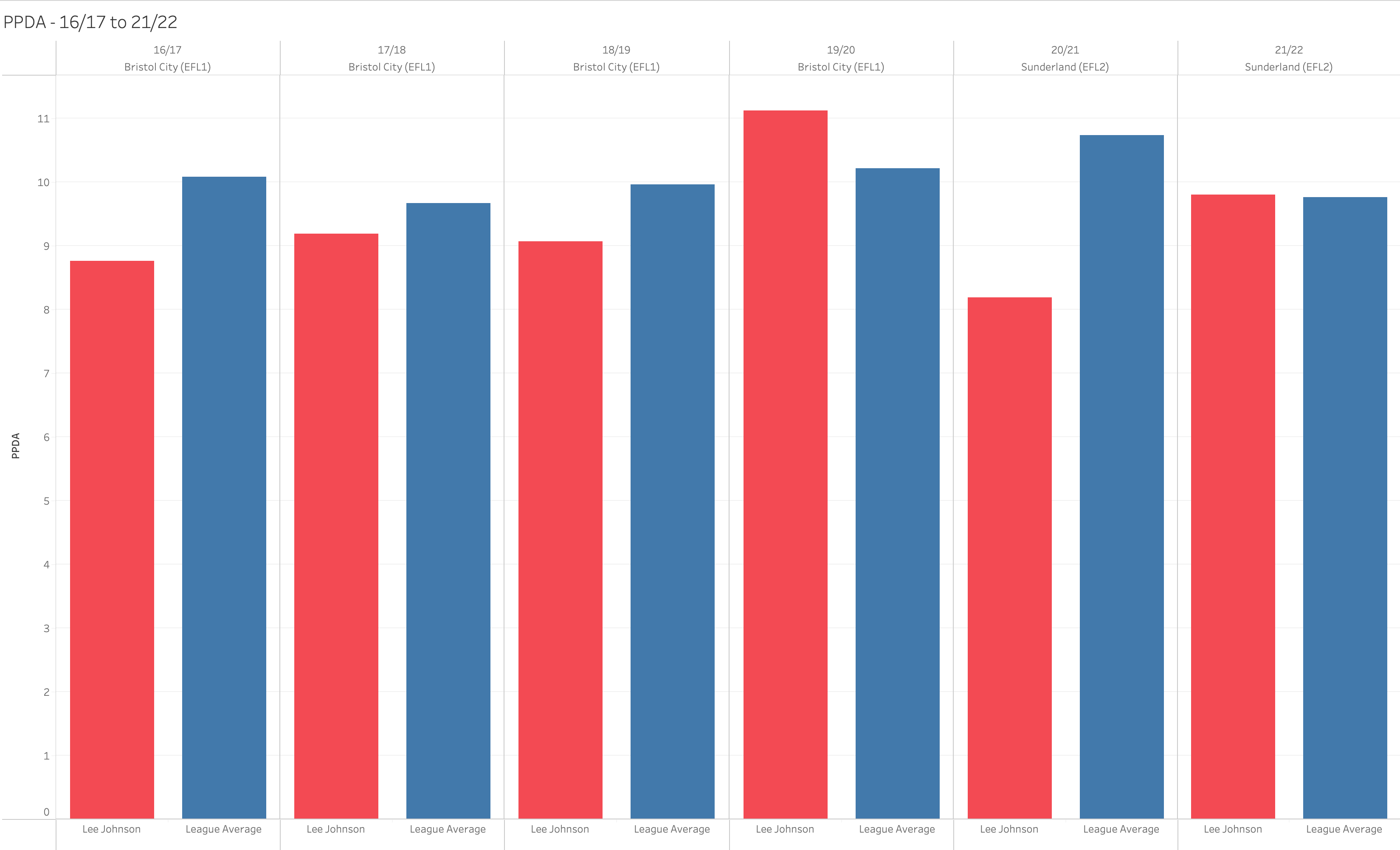 Sides with lower PPDA win the ball back in fewer passes than those with higher scores, therefore we can see in the bar chart that Johnson’s Bristol City scored below the league average in his first three seasons, only slightly above in his last.

Hibernian registered the fourth-lowest PPDA in the Scottish Premiership last season (9.15 compared to a league average of 10) but is likely Johnson will look to lower this number further.

Looking at the press in action, Johnson tends to favour an aggressive, ball-focussed system which looks to force the opponent into low-quality passes or errors. 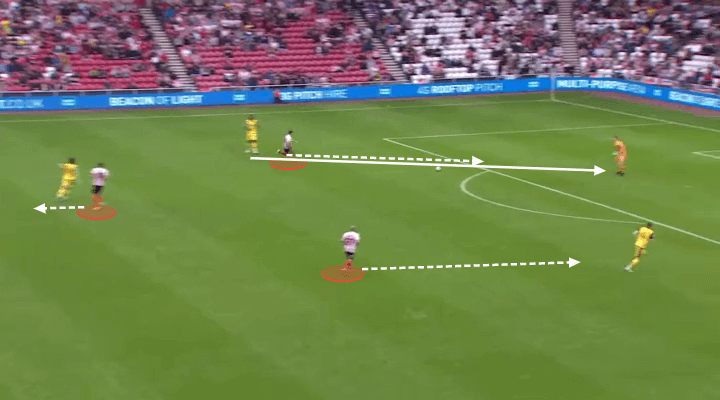 In this first example, we can see the high press being deployed in a home game against Bolton earlier this season. Stewart, initially pressing both centre backs, has dropped to cover the central pass out to Bolton’s holding midfielder. This triggers midfielders Embleton and Alex Pritchard to move up and press both centre backs aggressively.

Embleton then follows the pass from the right centre back to the goalkeeper, directly pressing the ball. With the goalkeeper’s options for short pass out limited, he is forced into a poor long kick which goes straight to a Sunderland player. 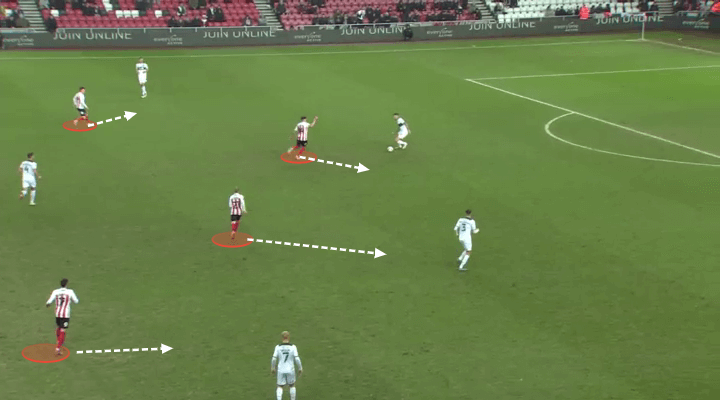 In this next example, we see the high press against Plymouth’s back three. Again, Stewart is the one triggering the press, directly closing in on the middle centre back of Plymouth. This, and left winger Broadhead covering the pass out to the right centre back, forces the defender to play to his left centre back. Pritchard then aggressively presses him, and with right Dajaku jumping up on their left wing-back, Plymouth are forced into a long ball and Sunderland wins possession back.

As mentioned, Johnson does not seem tied to one specific formation, although it will likely be a back four he will deploy at Hibs. Last season with Sunderland this was a tight and compact unit where if one defender moved out, others would follow, maintaining short distances between themselves. This approach looks to keep the defensive unit compact and protect the middle of the pitch from midfield runners. 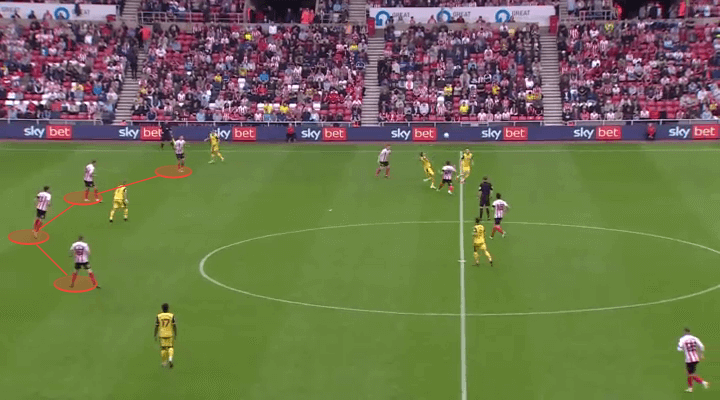 Here we see a typical example of Johnson’s back four, compact and well-structured However, this defensive set-up, coupled with their high pressing, did cause issues at times. 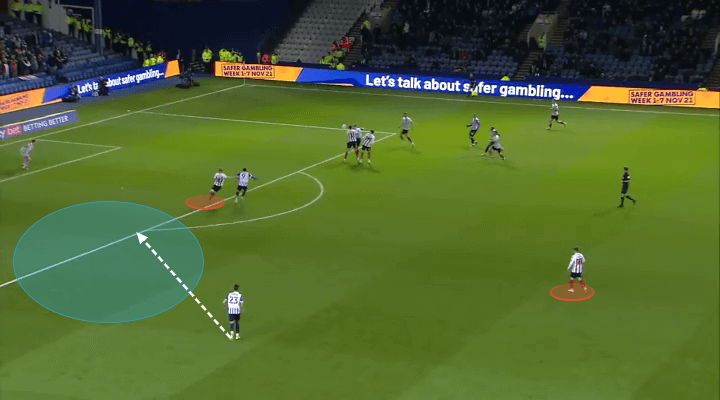 As we can see in the next example, the right-back has had to come inside to support the centre-backs as the opposition attacked down Sunderland’s left. The issue comes from the winger on the opposite side, whose high and narrow positioning leaves the opposition wide man with lots of space to exploit in behind. This was a particular problem for them against teams that played with wingbacks who would take up high and wide positions themselves.

His appointment may have underwhelmed some Hibs fans. However, if Johnson can replicate a similar style, quick attacking play in possession, high intensity pressing out of possession, then they may well enjoy the brand of football at Easter Road next season.

To be successful though, as well as entertaining, Johnson will need to have the backing to mould the squad to fit this high tempo style. This will be a big challenge, given Johnson is the club’s third permanent manager in 12 months.

However, if they can get that recruitment right, and he is given time to implement his style effectively, something his predecessor wasn’t given, then there is the potential for Johnson to create something exciting in Scotland’s capital.