Scouting the U17 European Championship

While, for the majority of Europe, the domestic football campaign is coming to an end, there is actually no let-up in the footballing calendar. While the likes of Sweden, Norway and Iceland, amongst others, continue to play through their league campaigns, we also see the start of the youth international tournaments that will go on throughout the summer. We are a couple of weeks away from the U19 European Championships which will take place this year in Slovakia. At the time of writing though, we have just reached the end of the group stages of the U17 European Championships in Israel.

The quarter-finals have not been decided with Germany facing France, the Netherlands coming up against Italy, Spain playing Portugal and Denmark facing Serbia. Each quarter-final tie is intriguing in its own right with a lot of talent throughout each of the squads that have made it through from the group stages.

In this article, we will take a first look at the players that have stood out for us in the group stages. This is the first in a series of articles that will look at the standout players both in this tournament and then in the U19 tournament later in June. This time, we will concentrate mainly on attacking players.

For the most part in this tournament, we are seeing players who have yet to make any sort of impact at first-team level. This is not the case, however, with Mathys Tel who has ended the French domestic season with 77 minutes in Ligue 1. Tel is very much seen as an attacking player. He is versatile in that he can play in the wide areas or through the middle as a central striker and his dynamism and positional awareness really stand out. When Tel was signed by Rennes though it was as a central defender as this was the position in which he was playing in when he was scouted while playing for his club in Paris.

The decision to convert Tel to an attacking player is now looking to be an inspired one and coming into this tournament, the French youngster was widely-tipped to be one of the standout players of the whole tournament. So far those predictions are being proved correct.

Tel has a great frame to go along with his athletic profile. He stands just over 6′ tall and given his age there is still potential for him to grow a little more. He is a very physical attacking player, which makes sense given that he used to play as a central defender, and he likes to make contact with opposition defenders in order to force them off balance. He also, however, has a very strong technical base. He can receive the ball comfortably with his back to goal or in space as he drifts into the half-spaces to find pockets of space and he typically moves very fluidly in possession of the ball. 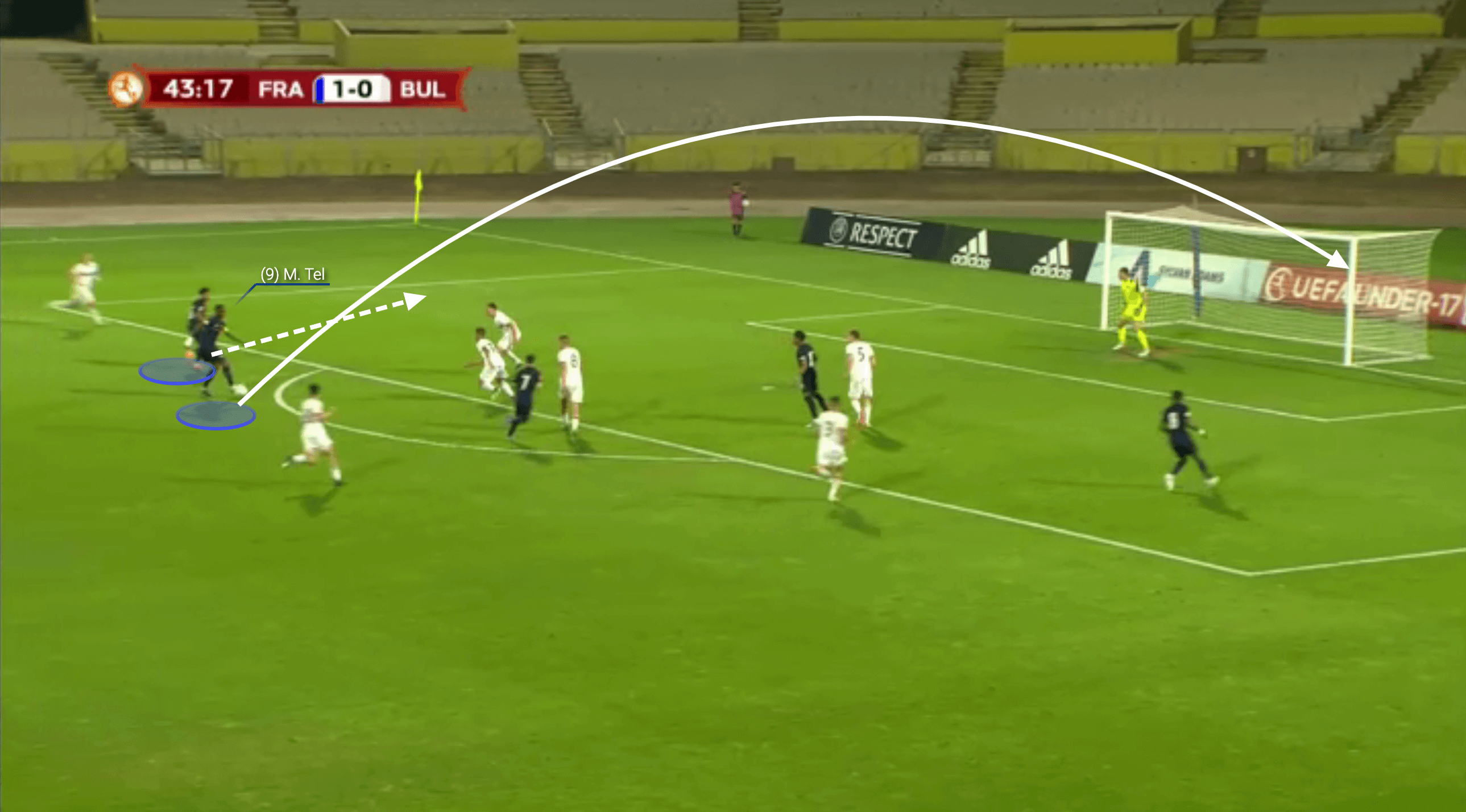 For such a young player Mathys Tel displays very good decision-making and composure when in possession of the ball in the final third of the pitch. He has already shown, despite his young age, that he can score a variety of goals and this suggests that his attacking output will continue as he develops into a regular first-team player at Rennes.

We see an example above of his composure in the final third. This was a moment in the group stage match between France and Bulgaria. As the ball breaks to Tel, positioned centrally around 25-yards from goal, he has options. There are runners making progress into the area to give passing options but given the time that Tel has on the ball, he is always going to look for a shooting opportunity. He maintains composure and simply opens out his body before placing the ball into the top corner of the Bulgarian goal. 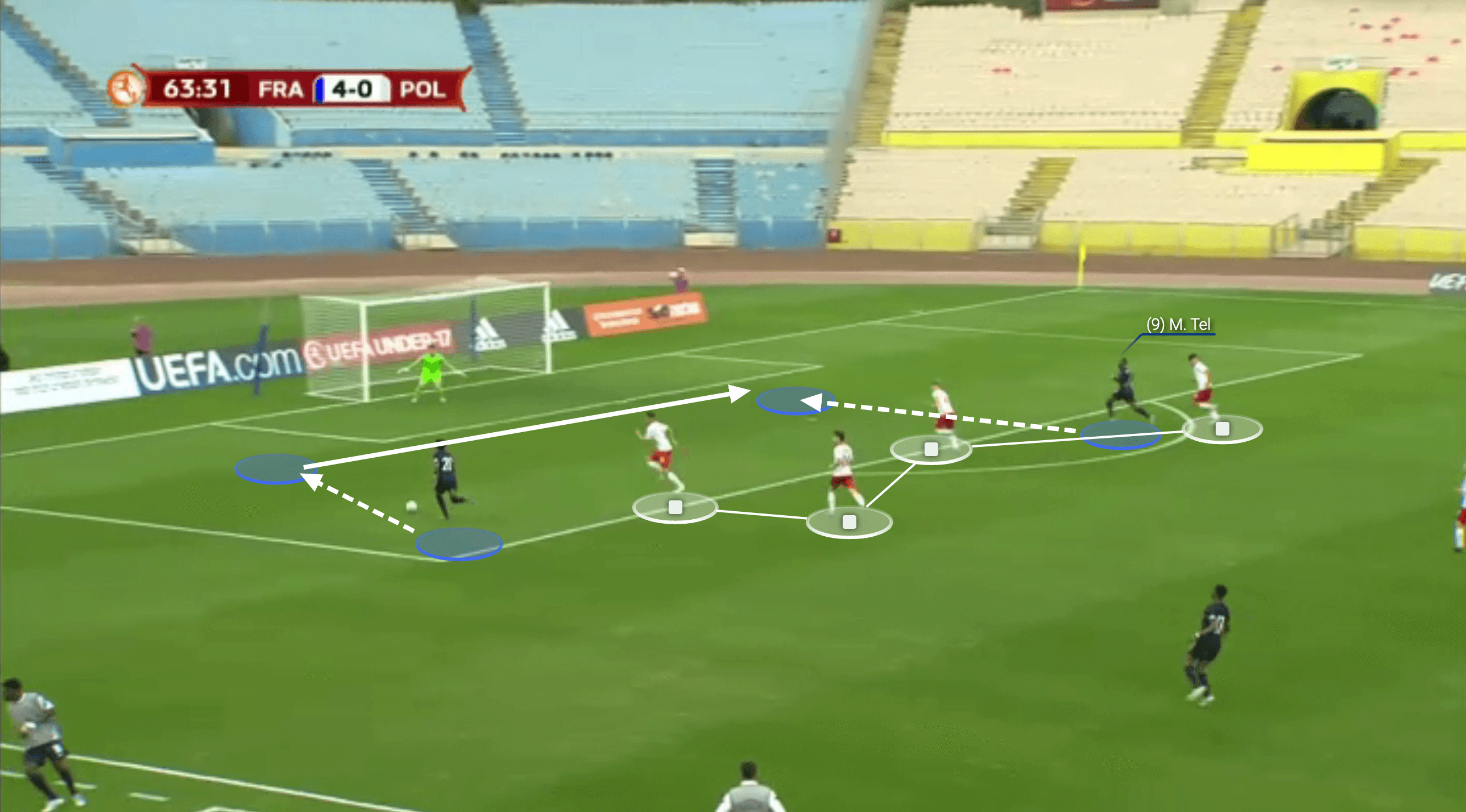 Tel is not. however, just a forward who relies on the spectacular when it comes to scoring goals. He also displays good anticipation and movement when breaking forward into the opposition area in order to attack crosses. We see an example of this here as his teammate is attacking through the half-space on the near side of the pitch.

The Polish defensive line is looking to drop in so that they can cover the threat, but on the far side of the pitch, Tel is making a break into the area on the blind side of the central defender. As the cross is played over the young forward is in position to slot the ball past the goalkeeper.

Going forward we expect Mathys Tel to become a more regular part of the first-team squad at Rennes next season. From that point, scouts from the bigger sides around Europe will start to circle.

Make no mistake about it, this is a very talented generation of Portuguese players. It would have been easy to pick one of the plethoras of players who are currently enjoying their development in the youth system at Benfica, but instead, we have gone for a wide attacker who is currently with Benfica’s crosstown rivals Sporting CP.

Afonso Moreira is a wide player who seems to be comfortable in a variety of roles. He prefers to play on the right of the attack but he is actually quite two-footed. He is capable of receiving the ball and attacking the defender on the outside and getting down the wing but he can also cut inside and threaten in the half-spaces or even the central areas.

He has yet to make an impact for his club at first-team level, but this should not come as a real surprise given the amount of talent that Sporting CP tend to develop through their youth systems. 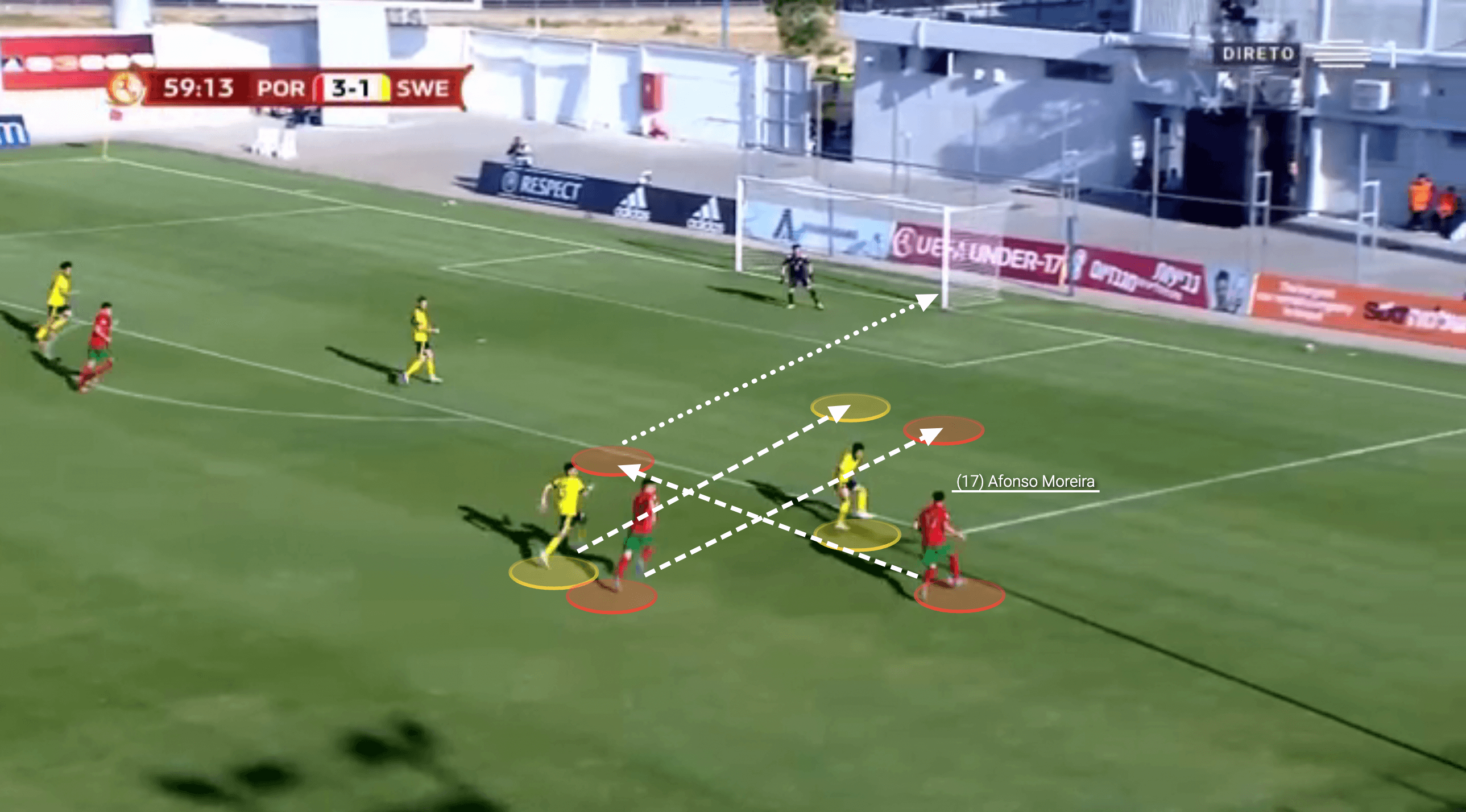 The fact that Moreira is so comfortable on either foot makes him very difficult to defend against in 1v1 situations. If a defender gets too tight to him, he will turn them and look to either draw a free kick or look to burst past them. If they sit off and allow him to receive possession easily, however, then he will face them up and then attack them down either side.

In this example, we see Moreira in possession just outside the corner of the penalty area. He has a teammate making an underlapping run and this drags one of the defenders out of the way. This opens up the space, and with some quick feet, we see Moreira cut inside before shooting low and hard towards the near post with his left foot. 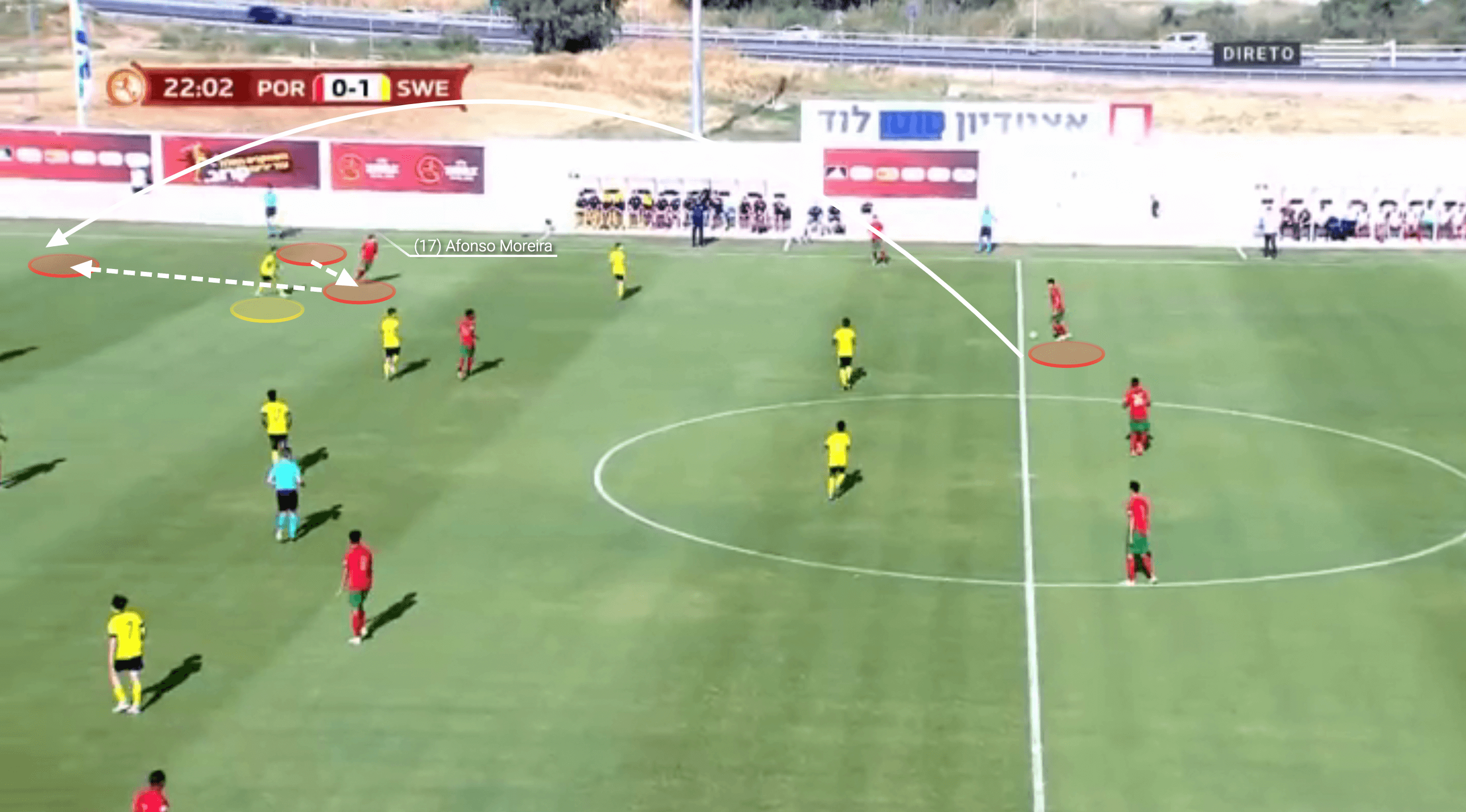 For such a young player Moreira already displays very good movement. He understands how to time his runs to drag defenders out of space and then how to spin and attack the space with the right timing. We see an example of this here as the Portuguese defender is in possession of the ball. Initially, we see Moreira check inside and back towards the ball. This simple movement drags the opposition defender forward and then Moreira spins and attacks the space behind the defensive line.

This movement gives the man in possession a passing option and allows the ball to be dropped over the top and into space.

Going forward, we are less sure that Afonso Moreira is going to make an impact on the first-team at Sporting CP in the short term. Instead, he may have to go out on a loan deal in order to further his development.

Jardell Kanga is the youngest of the players in our initial article and he is also the only one who has made a significant transfer in their young careers so far. The young Swedish forward is actually a product of the youth academy at the highly productive academy of IF Brommapojkarna in the lower leagues of Swedish football. Despite his young age he actually played over 1000 minutes at first-team level for the club before agreeing to make the move to join the German side Bayer Leverkusen. While Kanga is currently a part of the youth system for Leverkusen there is no doubt that they are aware they’ve signed a young player with real potential.

Kanga is a naturally left-footed player who is comfortable leading the line as the main striker or playing in a slightly withdrawn role as the second striker or ’10’. His movement and anticipation in the final third, when combined with his dynamic physical profile, make him difficult to defend against as he times his movements to break the defensive line extremely well. When he receives in the area, he has composure with the ability to wait for the goalkeeper to make the first move before slipping the ball into the goal. 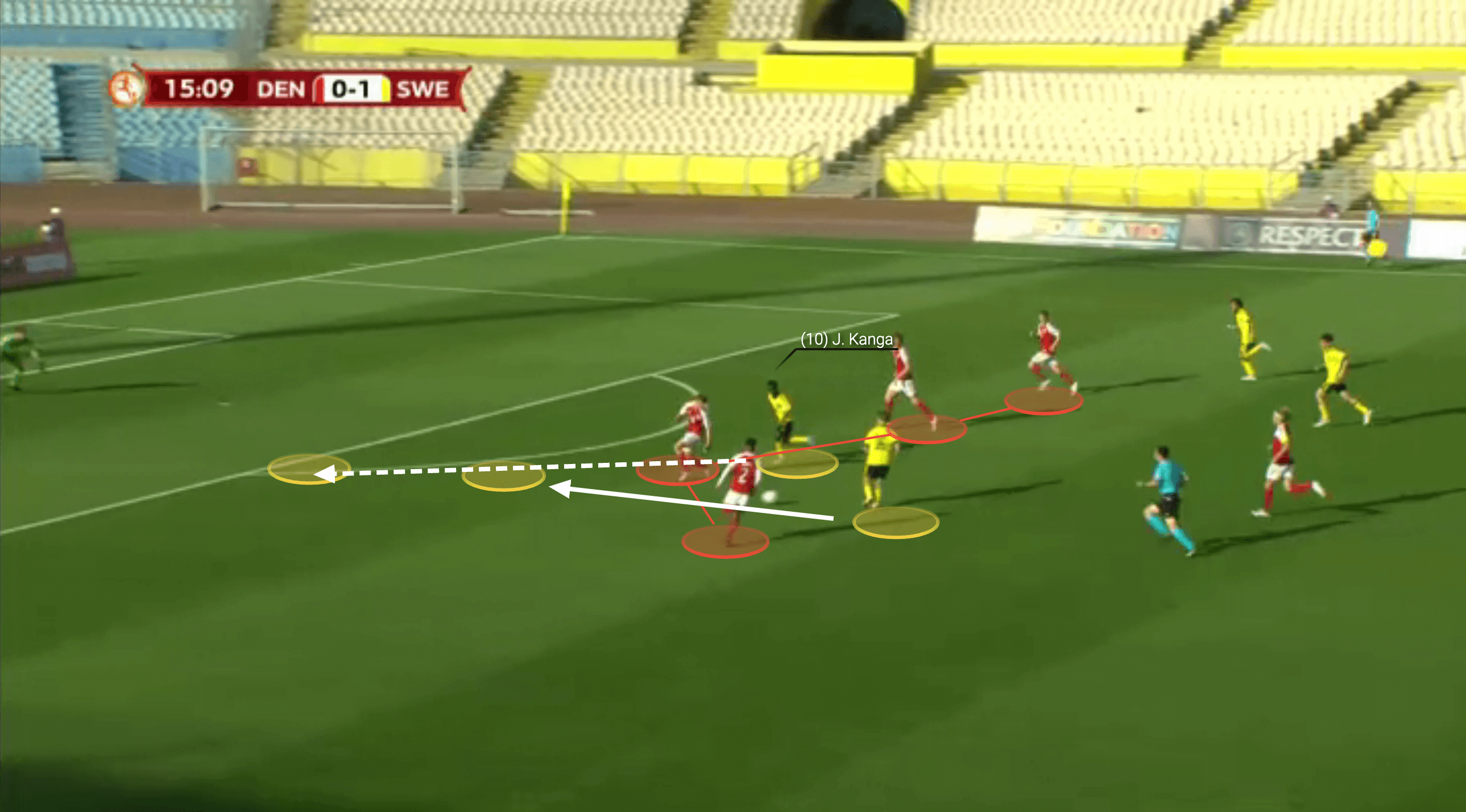 We see this movement here as Kanga is making a diagonal movement across the line in order to maintain his onside position. He naturally attacks the gaps between opposition defenders and he likes to position himself on the blind side of the defender. Here, as his teammate has time on the ball Kanga makes a dynamic diagonal run to break the last line. This allows the player in possession to play the easy pass to access this run.

When breaking into the area in these situations Kanga is a very dangerous finisher. 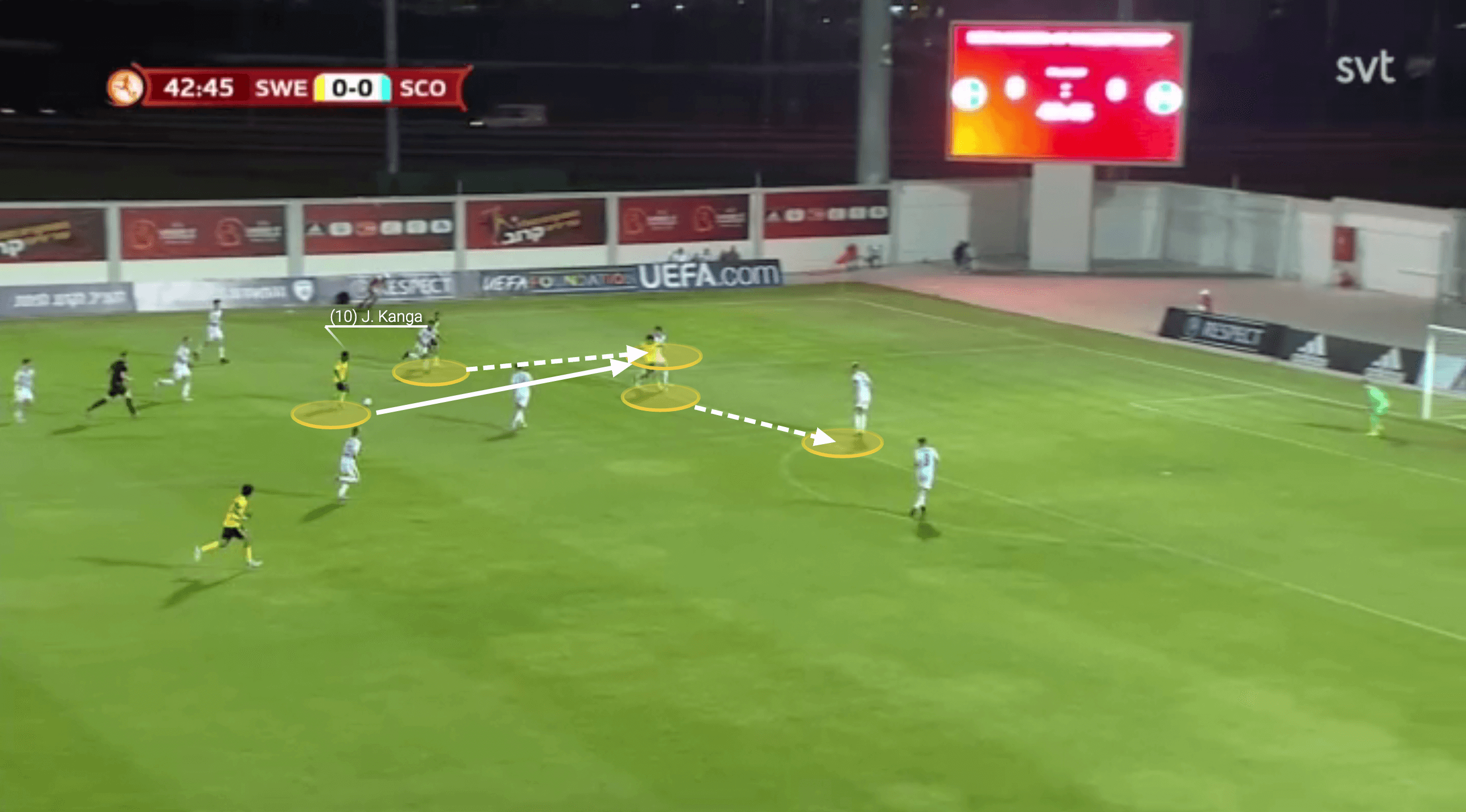 He drives forward in possession, having first dropped off of his marker to receive the ball in space, and as a teammate moves into a more positive position in the wide area, we see Kanga slip the through ball into space.

Looking ahead to next season, we think we will see Bayer Leverkusen use Kanga around their first-team. They are a club after all that have given significant minutes to young players like Kai Haverts and Florian Wirtz in recent seasons.

The U17 European Championship is often the tournament in which we can get a first look at some of the most promising young talents from across Europe. So far this tournament has not disappointed, with a very high level of football and some extremely interesting young players coming to light.

At this point, we would probably consider France to be the favourites to take the tournament but it really is still all to play for.