Erling Haaland, Naby Keïta, Sadio Mané, Dayot Upamecano, Enock Mwepu, Patson Daka, Dominik Szoboszlai. The list of players who have been signed or developed by Red Bull Salzburg and then sold for a significant profit is not never-ending, but it is extensive. The Austrian side have developed a reputation for not only playing high tempo and exciting attacking football but also of being able to identify and recruit talented young players that fit the DNA of the club almost perfectly.

Last summer, saw the latest players move off of the production line as Enock Mwepu and Patson Data both moved to the English Premier League with Brighton and Hove Albion and Leicester City, respectively. While the litany of players who have left RB Salzburg in recent seasons would cripple the playing squad of many sides, for the Austrian side of impressive stature, that never seems to be the case. This is because the talent identification, recruitment and development departments at RB Salzburg work effectively and in tandem. While Daka left a hole in terms of goal contributions, we have seen Karim Adeyemi step up to fill this space. Mwepu was the brains and legs in the midfield and with his move to Brighton going through in the summer, we have seen the mantle in the midfield taken up by the Malian international midfielder Mohamed Camara.

Camara is the perfect example of the pathway that exists within the Austrian club, as he actually moved from Mali to Austria in 2018 but spent time at Liefering (Salzburg’s feeder club in the second tier of Austrian football) before then spending time at TSV Hartberg, in the top-flight of Austrian football, on loan. This pathway meant that when the time came for Camara to step into the first-team squad he was entirely comfortable in European football and used to the tempo of the league system.

Now, in terms of the conveyor belt of talent leaving the Austrian club, I feel like Mohamed Camara may be the next man up. 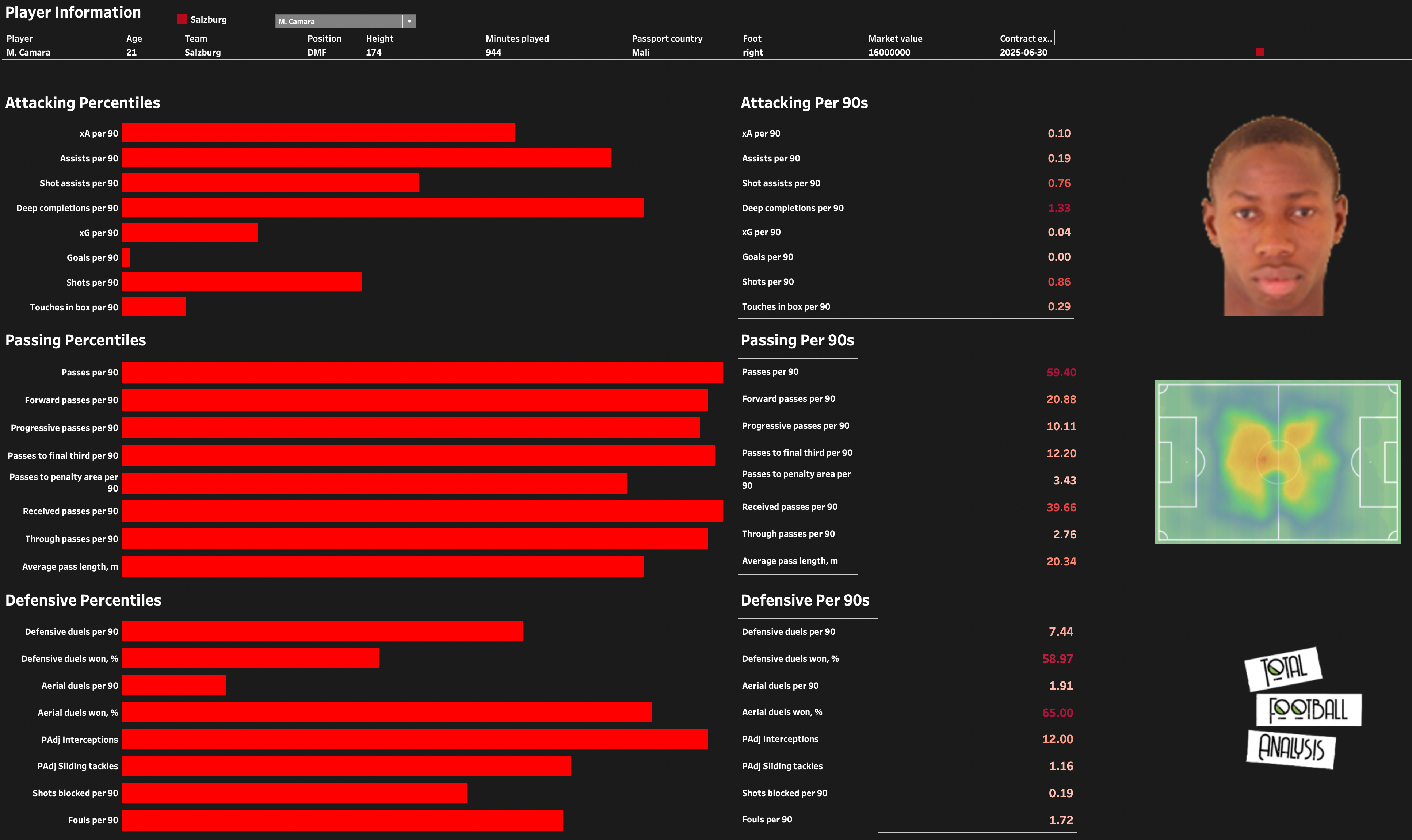 The 21-year-old Malian international has, at the time of writing, played 944 minutes in the Austrian Bundesliga so far this season and he has made a significant impact on the first-team for RB Salzburg. He is not the tallest of midfield players and he is listed at 174cm | 5’8” with a build that could perhaps be best described as wiry and athletic as opposed to muscular. Do not let that fool you though. Despite having a relatively slight stature, Camara is aggressive and physical as he shows the willingness to engage almost anyone in defensive duels to regain possession for his side.

We will return to this profile later in the report as we discuss various sections while we move through the relevant sections.

In the defensive phase Camara is extremely active and this fits the Red Bull characteristic of aggressive pressing and possession regains in the defensive phase. He perhaps profiles best as a ‘6’ or even an ‘8’-and-a-half with his ability to take up deep positions both in and out of possession and to provide a release for players in possession looking to regain possession and a safety net for players who look to move to a higher line that could be exploited by the opposition in transition. It is not uncommon, for example, for RB Salzburg to push their fullbacks, on both sides, high in the possession phase in order to provide width to the attack. If the opposition regains possession and then tries to transition with direct passes into the wide areas it tends to be Mohamed Camara who shuttles across to close down the danger for his side. 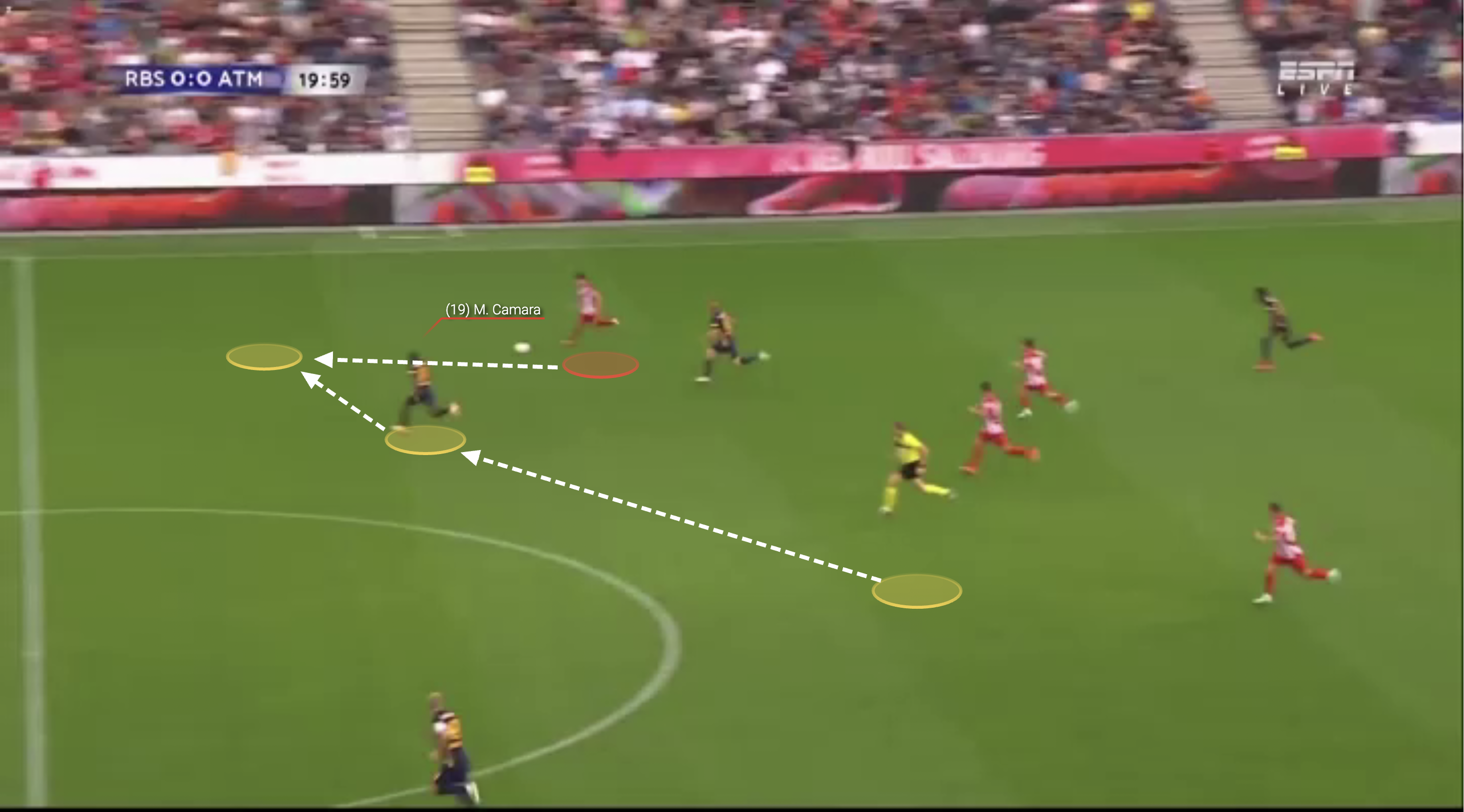 We see an example of this here from the Champions League match between RB Salzburg and Atlético Madrid. The Spanish side are able to regain possession with a pass releasing a player wide to attack the space that has been vacated by the RB Salzburg player moving onto a higher line. It is Mohamed Camara who not only has the ability to read the danger but the physical capacity to move across and engage the ball carrier and regain possession for this team. 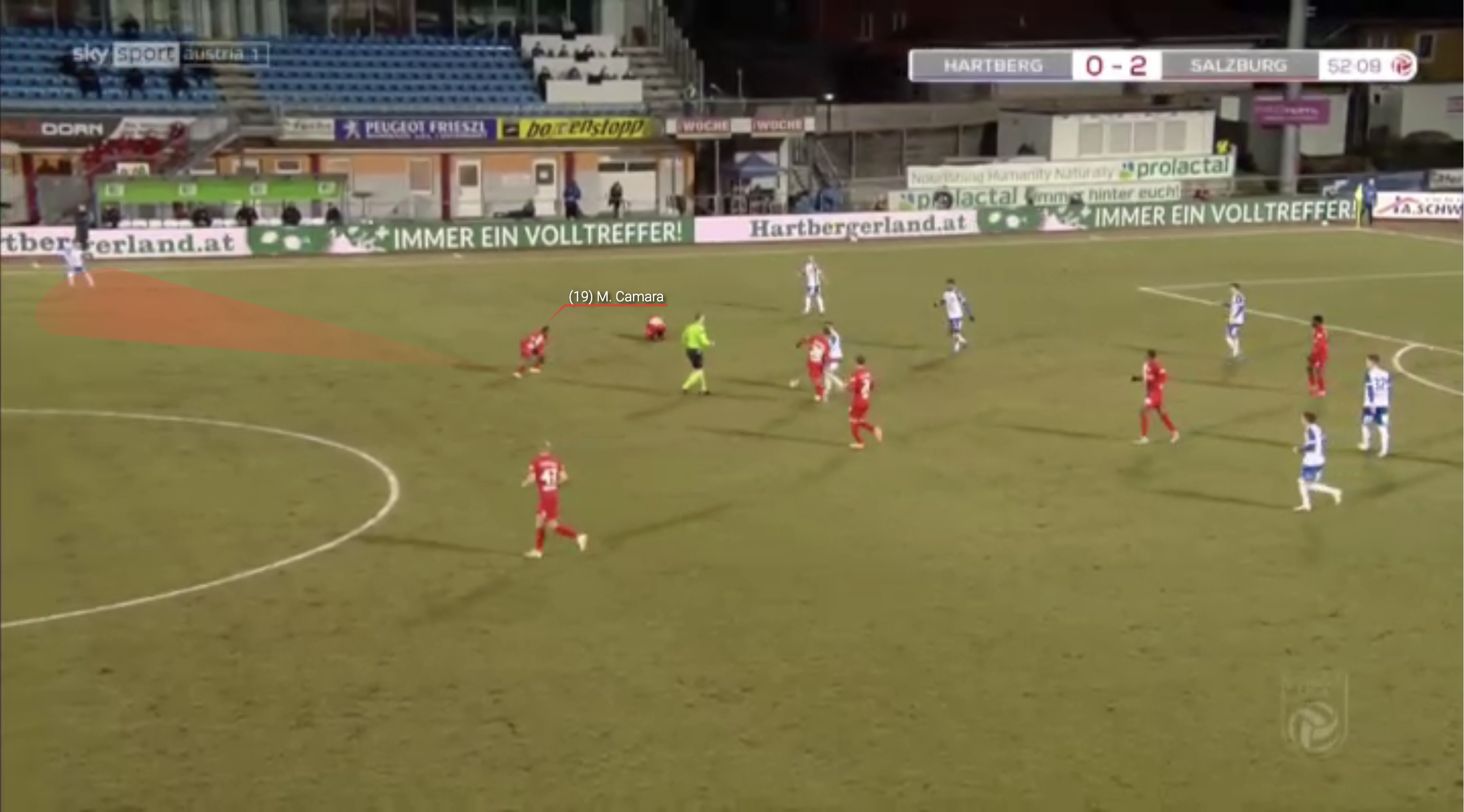 The ability that Camara has to read the game and react positively in the defensive phase translates to his ability to occupy and cut off passing lanes effectively. He has an incredible 12 possession adjusted interceptions so far this season, which is a remarkable total for a central midfielder. This is due to his good body shape out of possession, as he looks to cut passing lanes with his cover shadow, but also his reflexes and ability to read the intention of the opposition player in possession as he goes to make a pass.

We see an example of this here with the opposition regaining the ball in their own half. Camara immediately takes up a good shape to prevent the easy pass wide; as the man in possession takes a heavy touch, the Malian international is ready to pounce and regain possession aggressively and effectively.

If RB Salzburg are aggressive in their approach to the game out of possession, the same can be said of their approach in the build-up and chance creation areas of the game. They encourage vertical football with players expected to play forward passes that break the lines of the opposition defensive structure and allow the team to move forward quickly into the final third. Crucially, though, vertical football does not mean long balls with little intent and instead, the ball is moved forward quickly but in a controlled manner.

Camara is extremely aggressive in his passing approach to games and so far this season, he is averaging 59.40 passes per 90, with 12.2 per 90 of those being played into the final third of the pitch — and 3.43 per 90 played to the opposition penalty area. 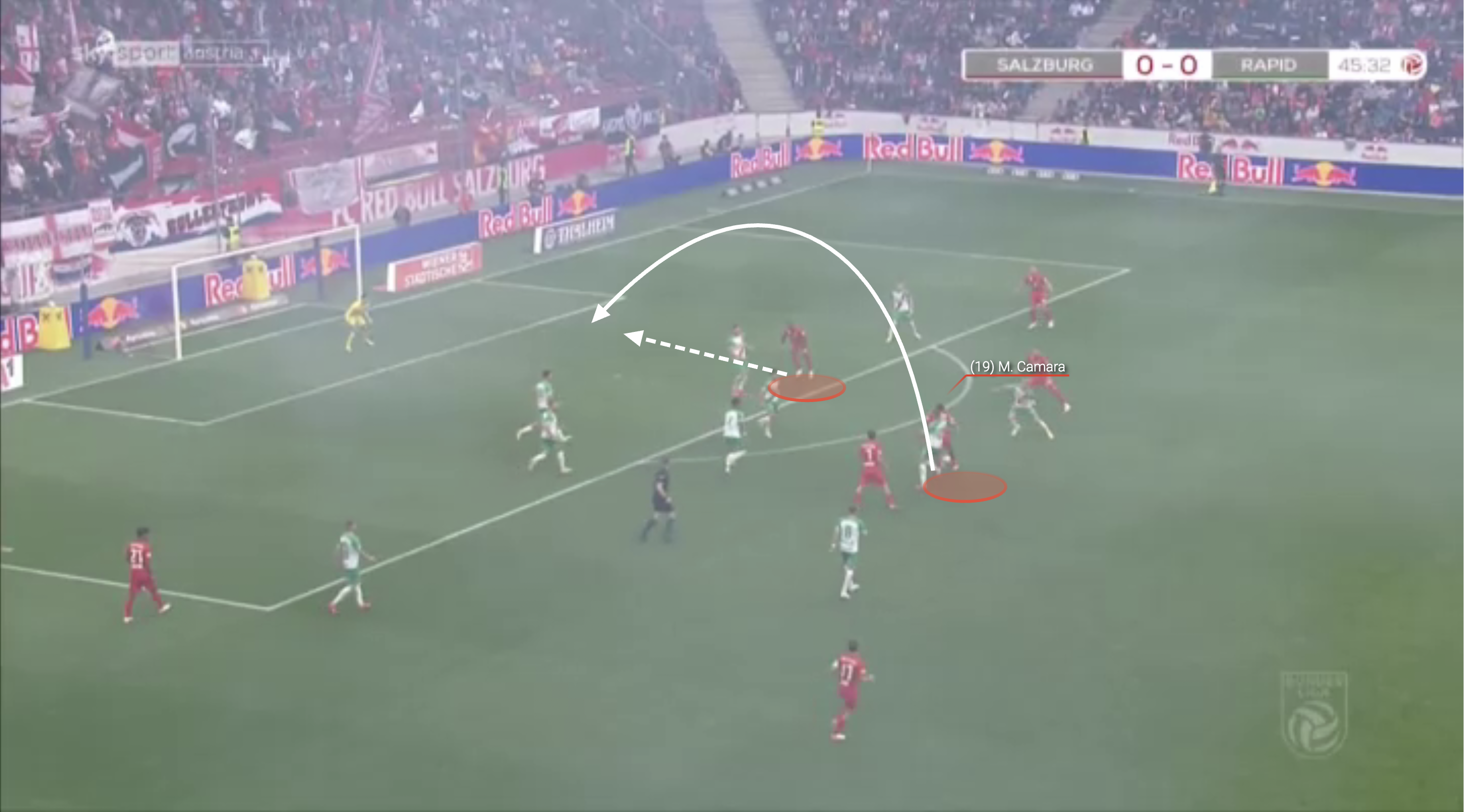 We see an example of this here as Camara was initially positioned deep, relative to the rest of the attacking unit, and centrally. As the opposition repelled the first phase of the attack we saw that Camara was in a position to regain possession of the ball. As he does so, he is physical enough to hold off the attempts of the opposition player to regain possession, but he also retains the ability to read the movement ahead of the ball and the quality to clip a lofted pass over the top of the defensive line in order to create a goalscoring opportunity for the forward player. 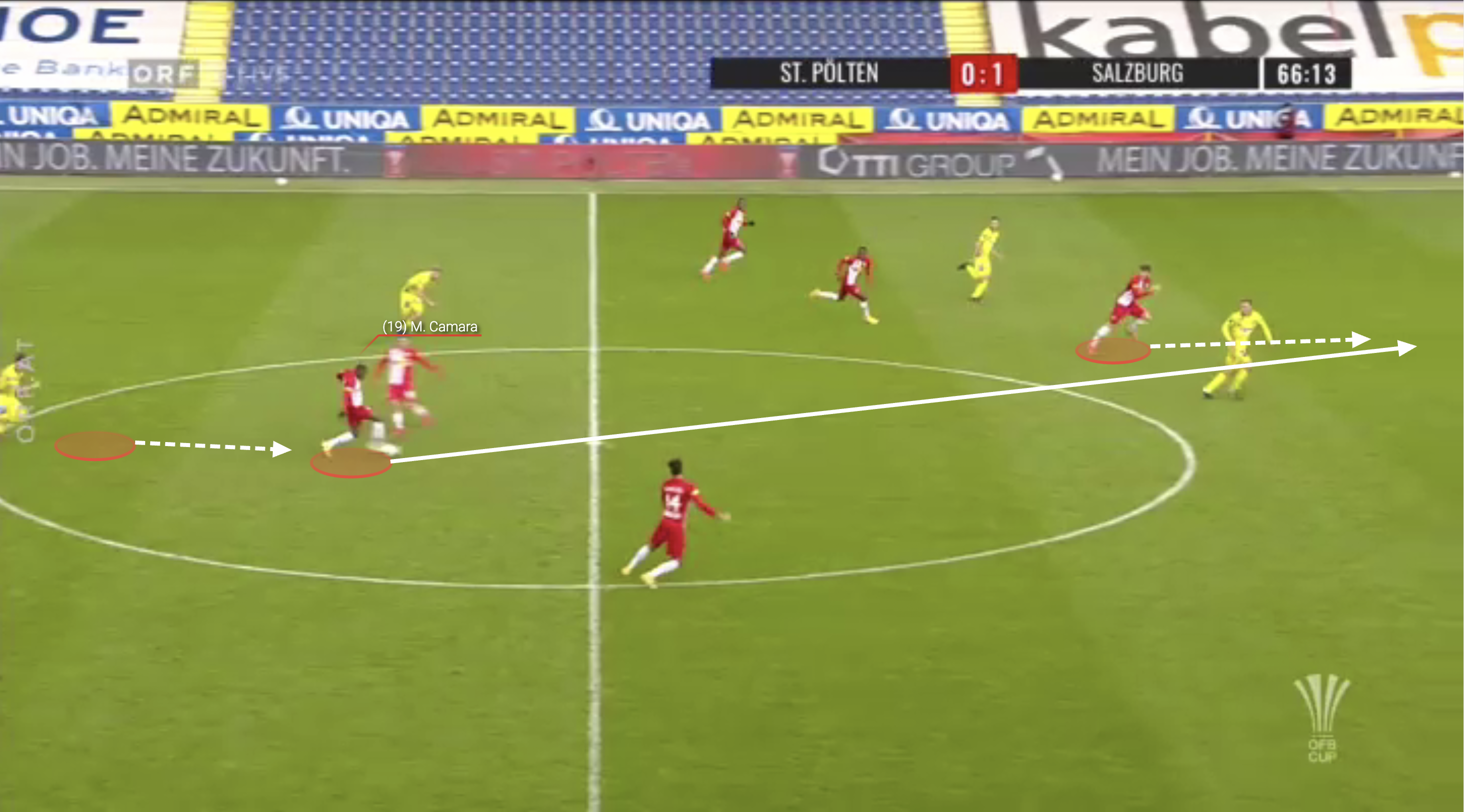 This is, perhaps, an even better example of how aggressive and vertical RB Salzburg are when they are in possession of the ball. The play had been scrappy and Camara was in a position to step onto a loose ball in the midfield. In this situation, many midfield players would look to take a touch or move the ball wide to maintain possession. Instead, Camara played an aggressive vertical pass that broke the line of the opposition defence and released the forward through on goal.

Ability to change the attack

While we have already touched upon the fact that RB Salzburg like to be aggressive and vertical in their approach when in possession of the ball, this is not their only attacking outlet. Indeed, on the domestic front, the Austrian side are increasingly facing opponents who look to sit in a deep and compact defensive block as they look to prevent Salzburg from being able to break through their lines. This means that the club needs their midfield players to either be able to drive forward in possession to move opposition players out of structure or to have the capability to play switches of play to access the spaces at the sides of the opposition defensive structure. Camara falls into the latter category with the ability to switch the play with accurate diagonal passes. 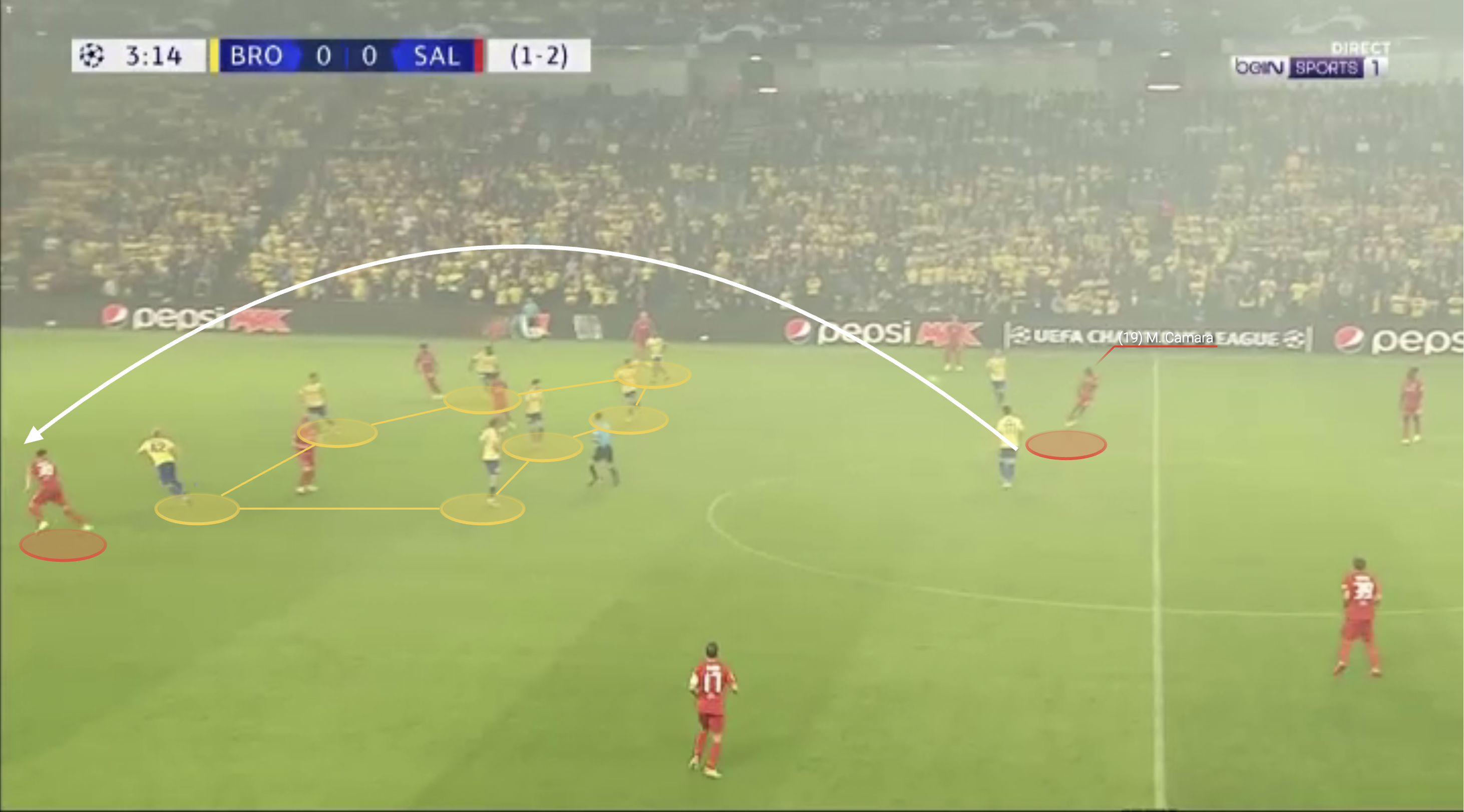 We see an example of this here, with Camara initially in possession of the ball at the base of the midfield. As you can see from the image the opposition have nine players in a deep and compact defensive block. The Malian international midfielder has the vision and ability to take the ball in these areas, albeit under little pressure, before finding an angled pass to the corner of the penalty area to find the wide player. This pass turns the defensive line and accesses the space to the side of the opposition defensive structure. 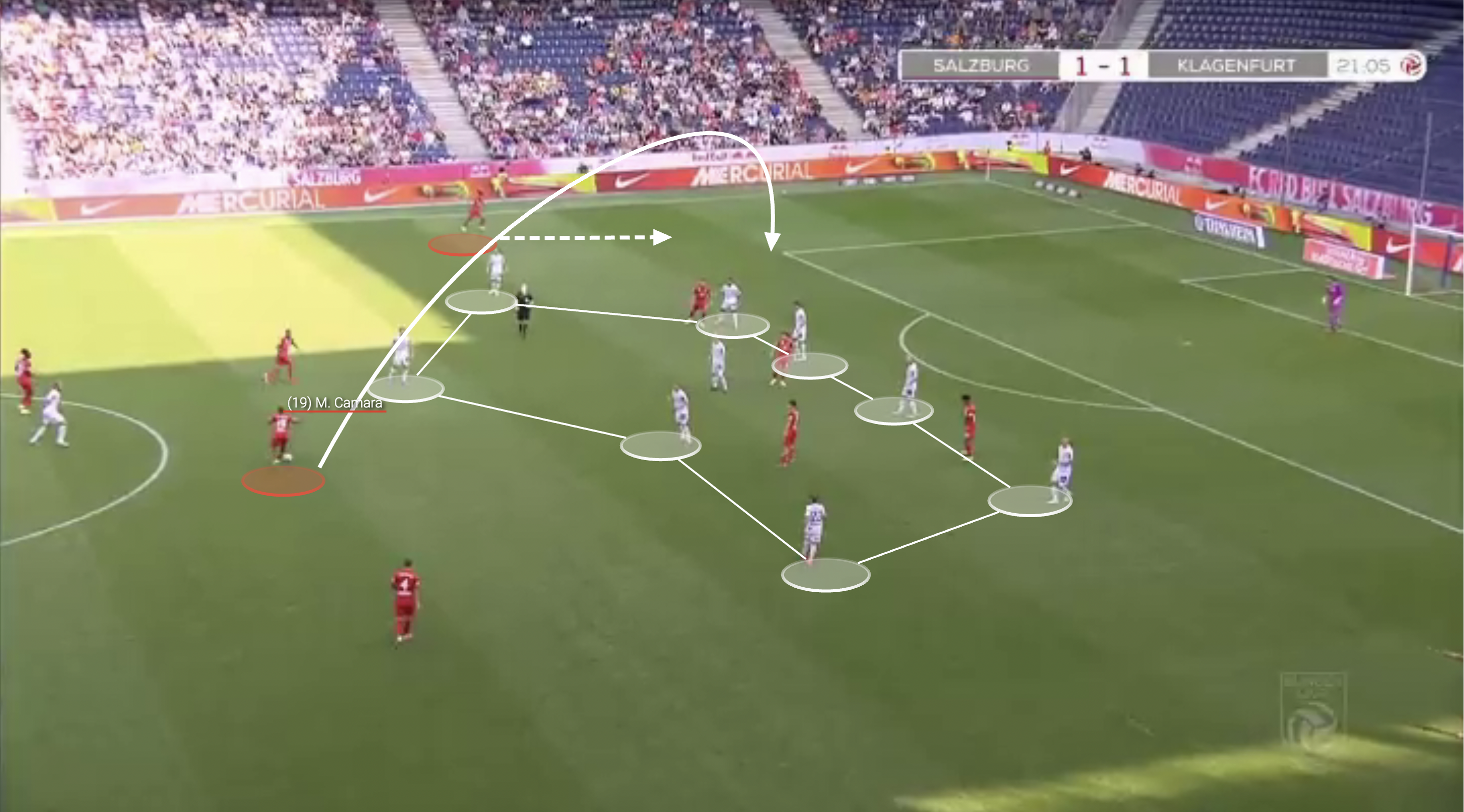 We see another example of this here, this time in the Champions League match against Brøndby. Camara once again takes possession of the ball in a deep position and again he has time and space to get his head up and play.

The opposition have seven players in a deep block and two more close to the ball, but the Malian international midfielder reads the movement of the striker and has the quality to drop a pass into space behind the defensive line to create a goalscoring opportunity.

Mohamed Camara is under contract at RB Salzburg until 2025 but as we have seen in recent seasons, that is not necessarily a barrier to a player leaving the Austrian club. I would expect him to continue to perform in this manner for RB Salzburg over the course of this season as he smoothes off some rough edges to his game from a tactical point of view. After that, I would not be surprised to see the clubs in the German Bundesliga or English Premier Club registering an interest in signing the young midfielder.