Bundesliga 2021/22: Why Freiburg’s Nico Schlotterbeck is one to watch for this season – scout report

Freiburg have had a run in recent years of providing a platform, or even producing, outstanding centre-back talents. Mathias Ginter came through the Freiburg academy, whilst Robin Koch and Caglar Soyuncu spent time at the Bundesliga club before making their moves to the Premier League with Leeds United and Leicester City respectively. The latest talent out of Freiburg is that of Nico Schlotterbeck. The younger brother of teammate Keven Schlotterbeck, Nico spent last season gaining first-team experience with Union Berlin, performing well enough to convince Head Coach Christian Streich that he was worthy of a starting berth at his parent club this season. This tactical analysis and scout report will provide an analysis of the 21-year-old centre-back, highlighting some key qualities that have allowed him to make a fast start to the 2021/22 campaign and the tactics he uses in defence.

Freiburg have conceded four goals so far this season, second only to Mainz’s three conceded goals. Schlotterbeck has naturally played a key role in this solid defensive start to the season and has performed respectably statistically.

Whilst his 6.38 defensive duels per 90 in the Bundesliga isn’t overly high, he has a 73.2% win rate on these which is exceptional. From centre-backs to have played at least 500 minutes thus far, Schlotterbeck has the sixth-highest win percentage from defensive duels, with Borussia Dortmund’s Manuel Akanji leading the way with 87.8%.

Aerially, Schlotterbeck is equally impressive. From players to have played any minutes at centre-back this season, Schlotterbeck ranks comfortably in the upper-right quadrant in the graph below. 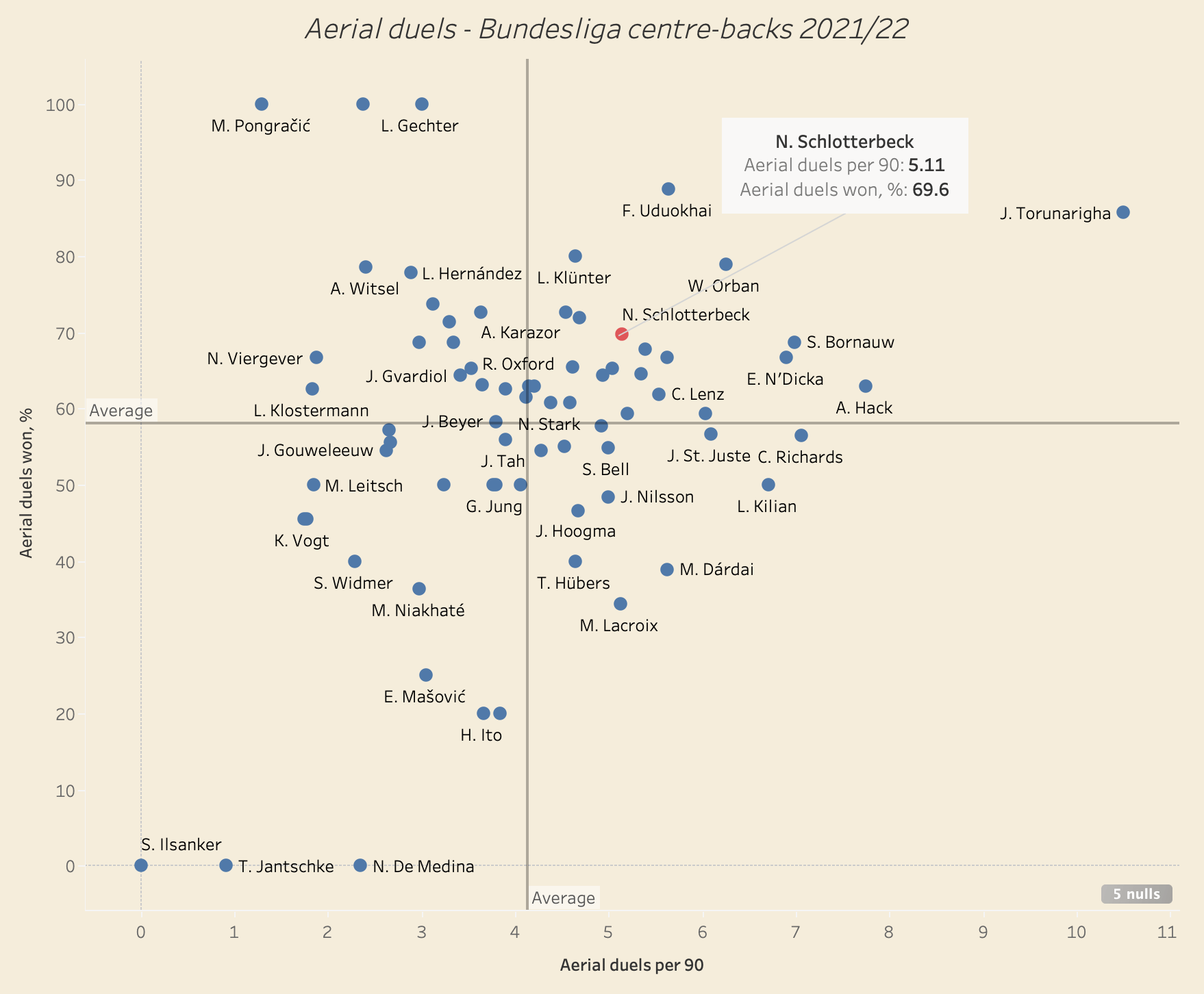 However, if we were again to look at centre-backs to play more than 500 minutes, he would rank fifth highest in the league. Statistically, therefore, Schlotterbeck is a defensive standout. Even more so given his age and lack of experience still in the Bundesliga.

Aerially he possesses excellent timing, giving himself plenty of room to attack the ball. It’s not uncommon to see Schlotterbeck starting well away from the closest attacker. He provides himself with space to build momentum before attacking the ball and he displays exemplary timing to jump slightly earlier than the attacker, using the force from his jump to legally prevent the attacker from competing with him, whilst his run-up provides him with the momentum to jump high. Standing at 1.91m in height Schlotterbeck also has a height advantage over small forwards. 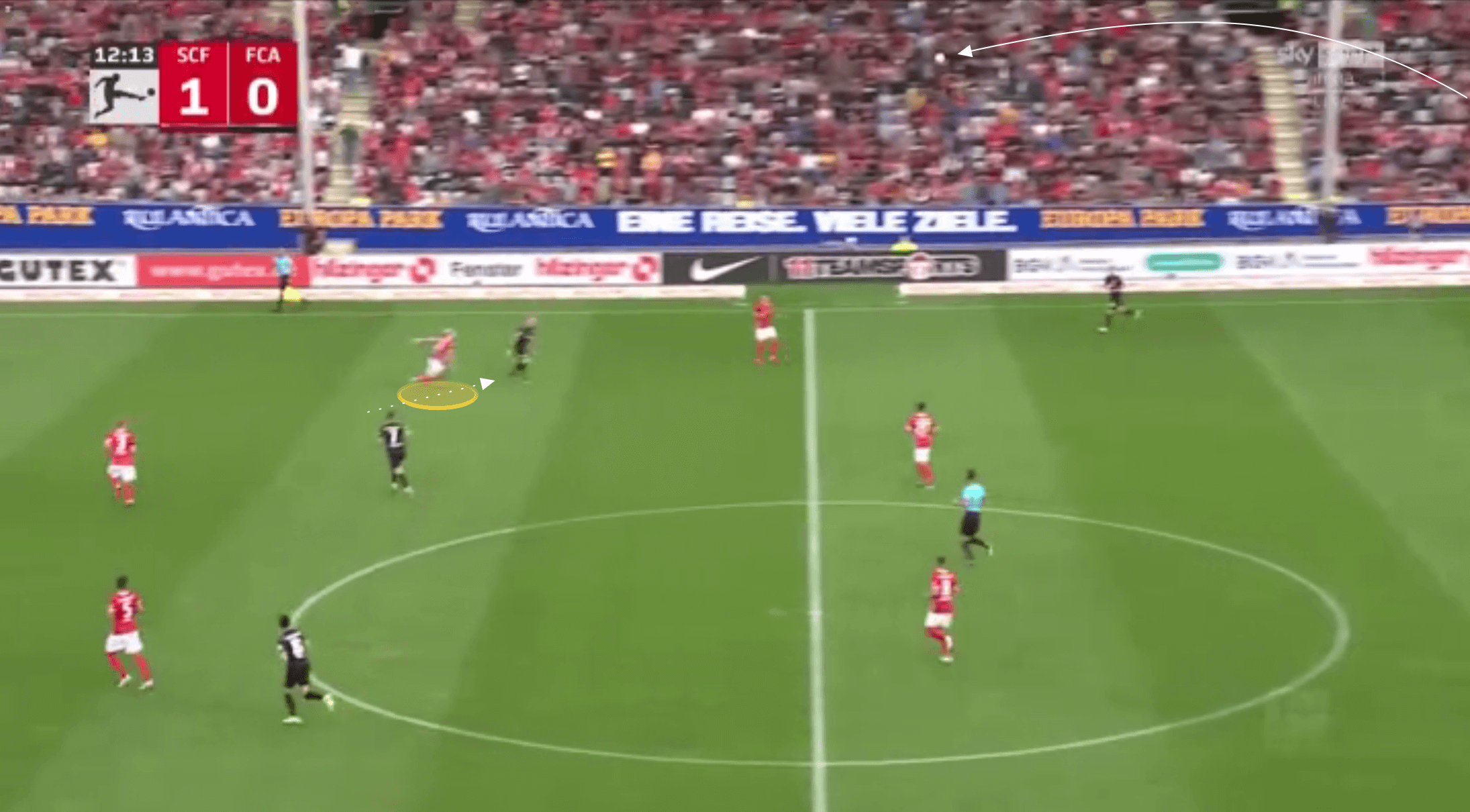 Schlotterbeck is aggressive in stepping forward, showing excellent anticipation to read a forward pass into one of the centre-forwards. He has a quick reaction time to a centre-forward dropping deep to receive the ball, following his man tightly and preventing them from being able to turn. However, he doesn’t just provide pressure here. Schlotterbeck frequently forces a turnover, coming away with the ball himself, following a forceful but fair tackle with good timing. 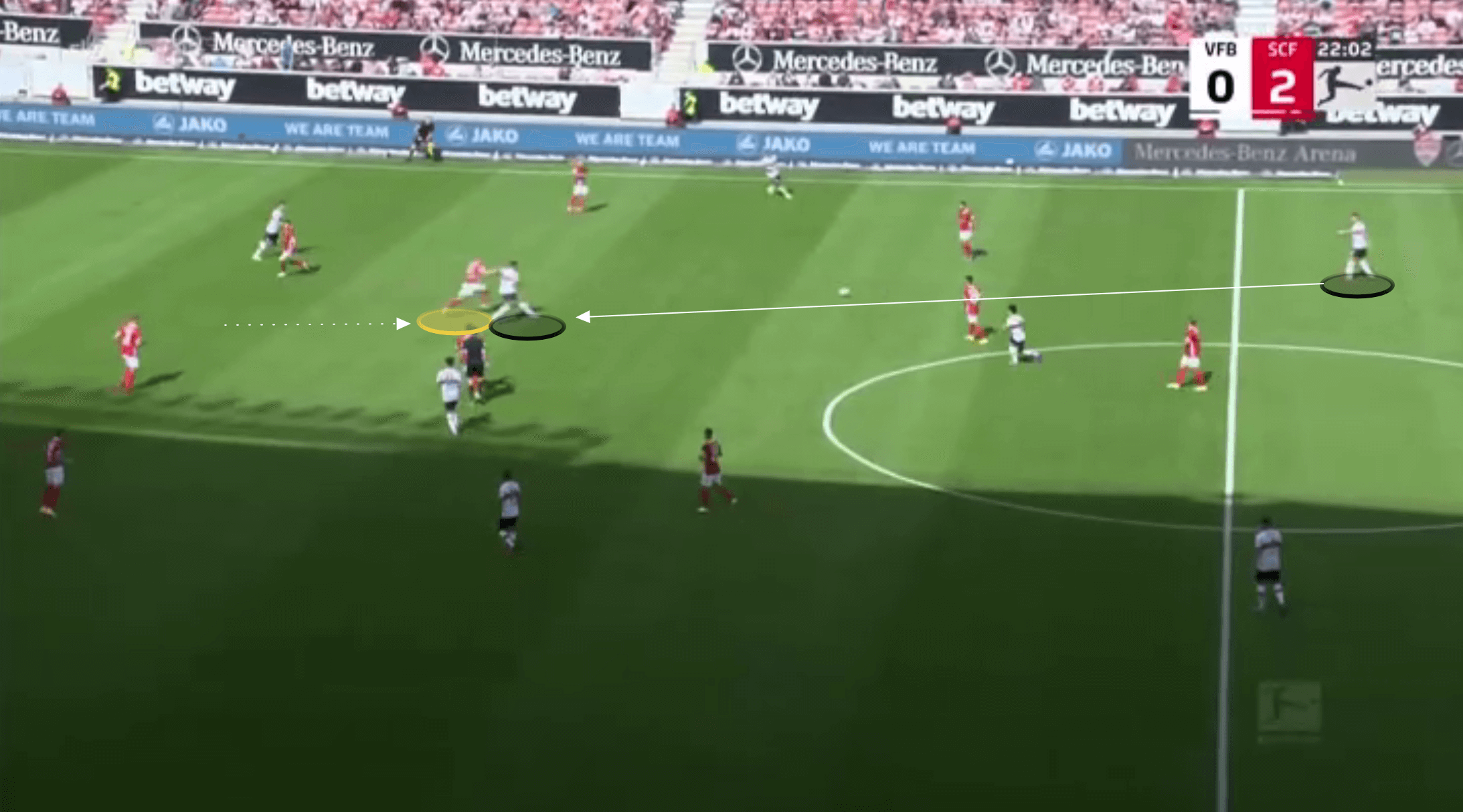 He is comfortable starting way off of the forward, but as the image below demonstrates, he will be on the front foot, ready to step forward. However, he is comfortable with the attacker thinking they have the room to receive and turn. 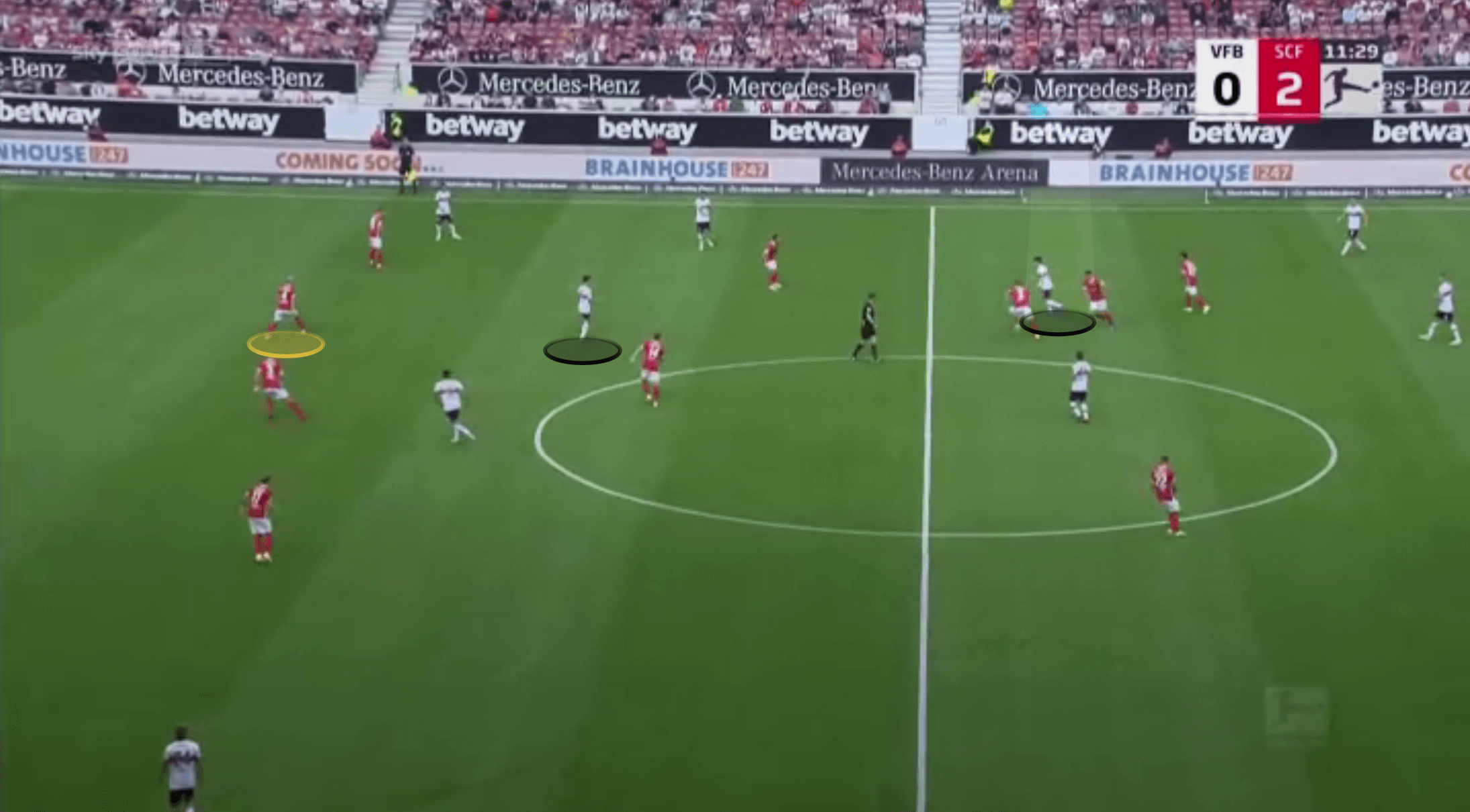 He covers the distance so quickly as the ball is played, in part due to his anticipation, but he has impressive acceleration for a big man, and as the player receives and turns in the next image, he is already touch tight and in a great position to come away with the ball. 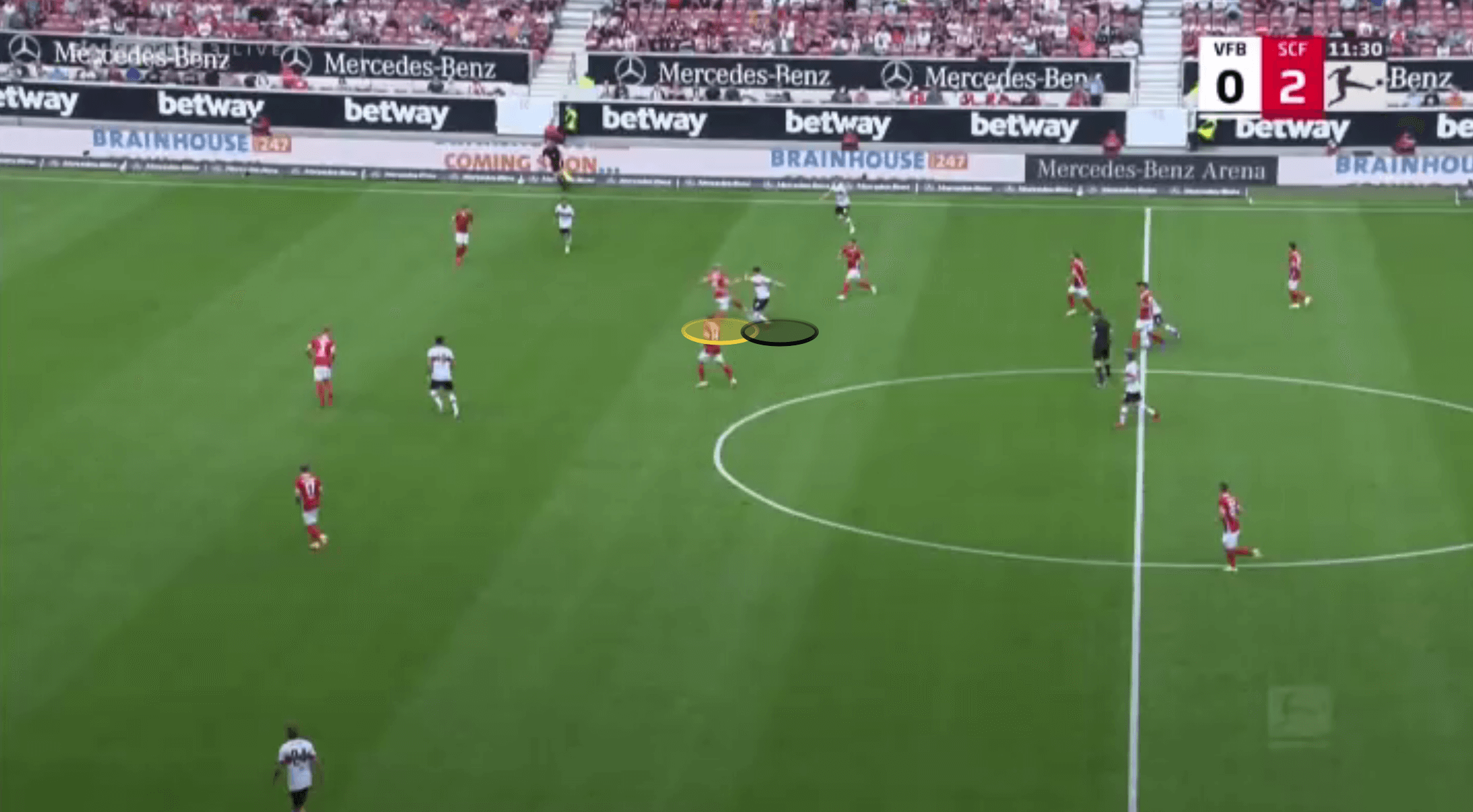 Schlotterbeck is equally aggressive in stepping forward to engage players driving forward on the ball too. Once more he shows impeccable game-reading and timing to perform well in the defensive duel. Firstly, Schlotterbeck has good pace over short distances, as we’ve already seen, and turns to recover well if beaten. As the image below shows, when a player is driving forward, he will initially be on a side-on position, ready to step forward if possible, but equally in a position where he is showing the opponent the outside and is ready to turn and run with the player should they beat him. 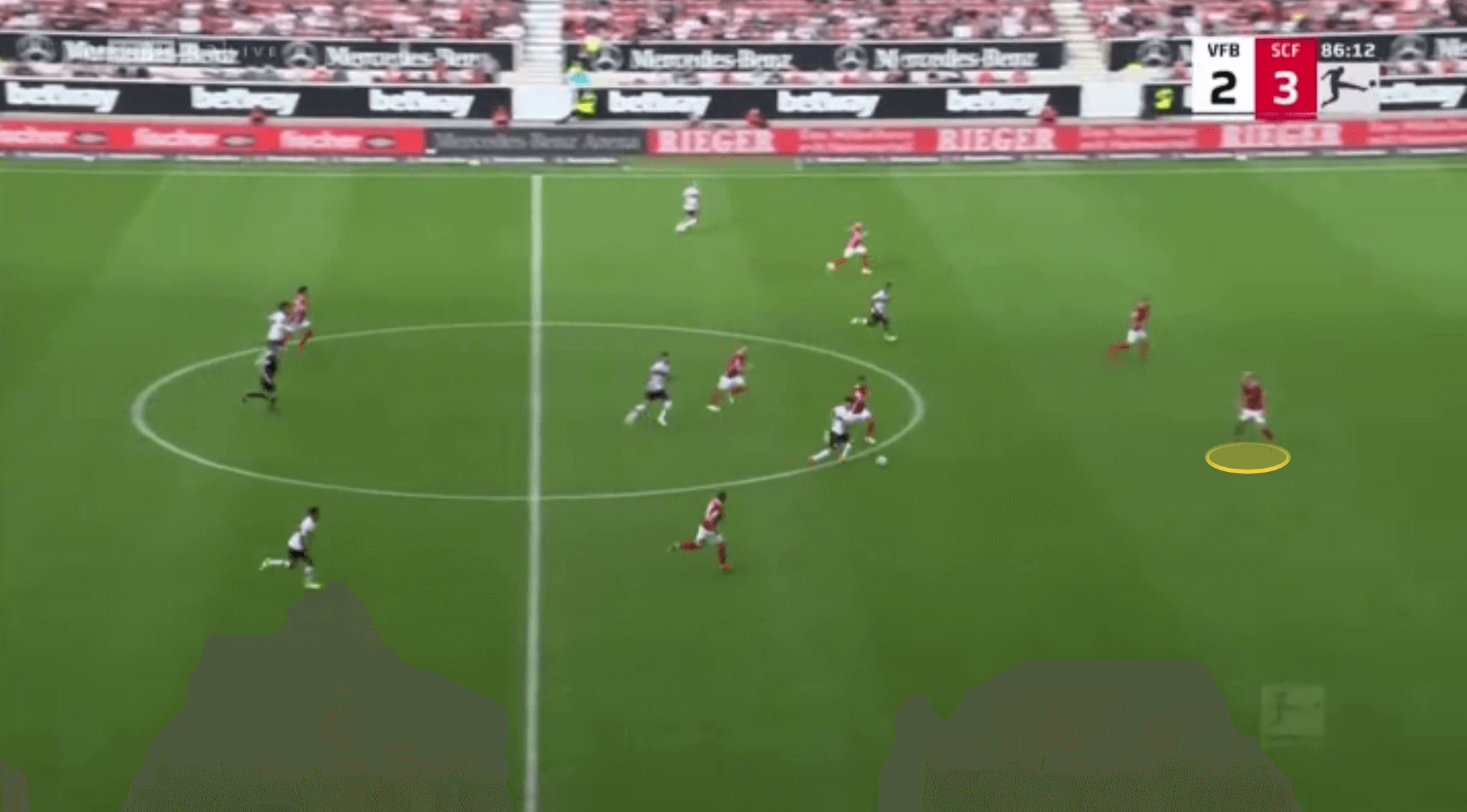 Schlotterbeck waits for the attacker to make a mistake. If they make a heavy touch for instance, as they do in this example, he is quick to step forward and make the interception. However, he is also ready for them to continue driving forward at pace and without making a mistake. In this possibility he is far less likely to step forward. 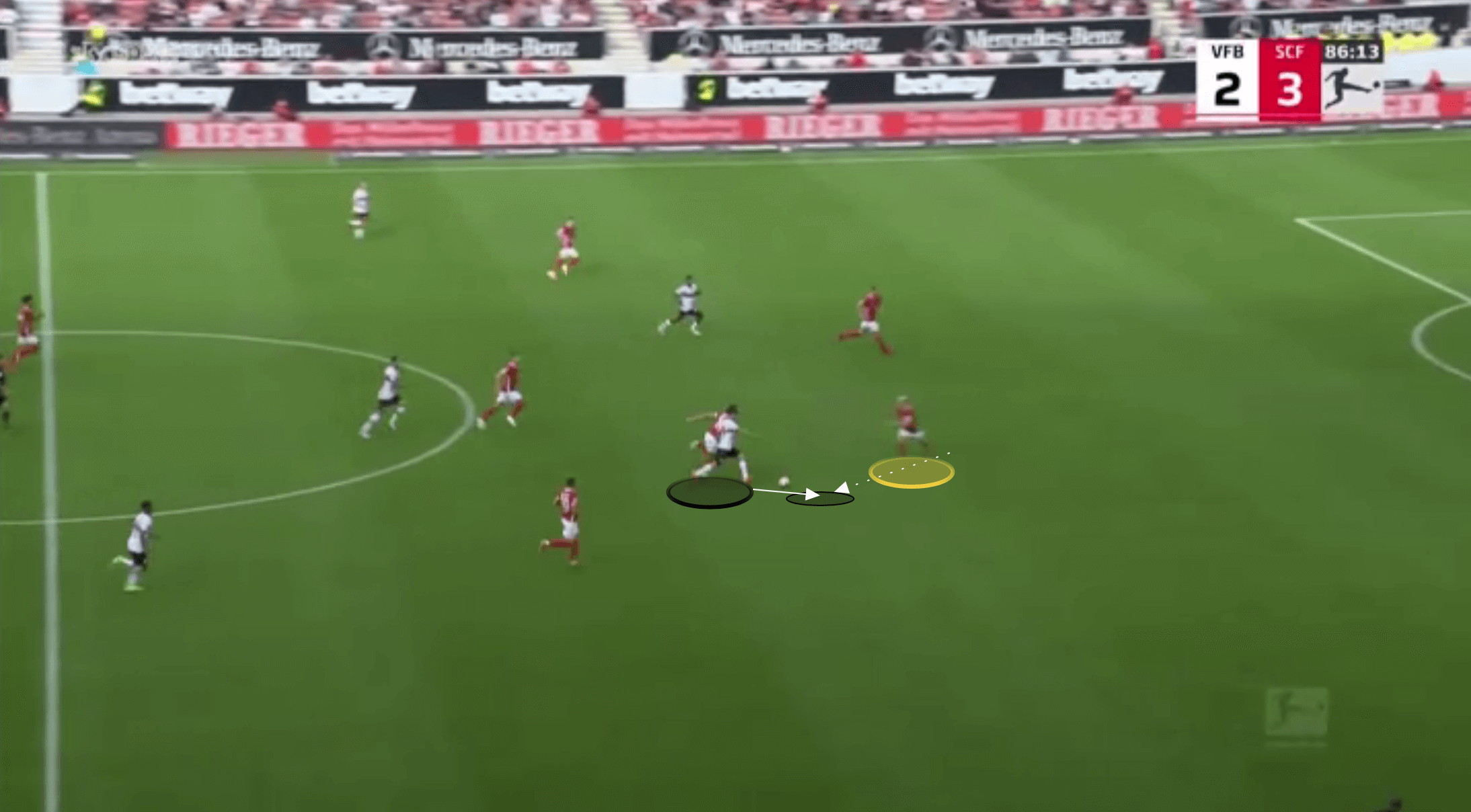 Schlotterbeck is left-footed and as such is used on the left side of the defence. He can be used on the left side of a back three or as part of a traditional centre-back pairing. He gets plenty of ball on the left flank and if playing in a back three will push very wide allowing left wing-back Christian Gunter the freedom to push high. He will venture forward with possession too, as the heat map from his performances thus far this season (shown below) testifies. 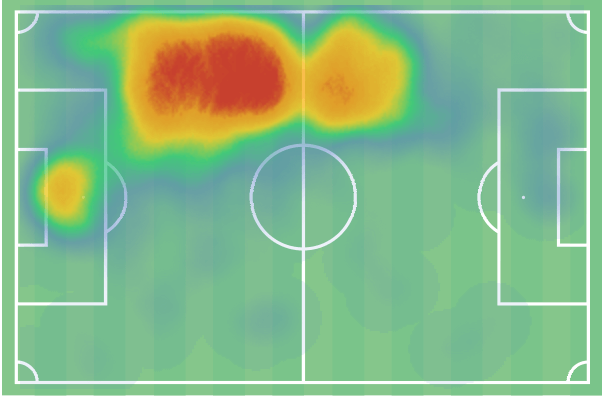 Schlotterbeck will look for possession during build-up play, and if they have possession near the opposition half, will happily step forward and wide into a position inside the opponent’s half, whereby upon receiving he can pass forward or drive forward. 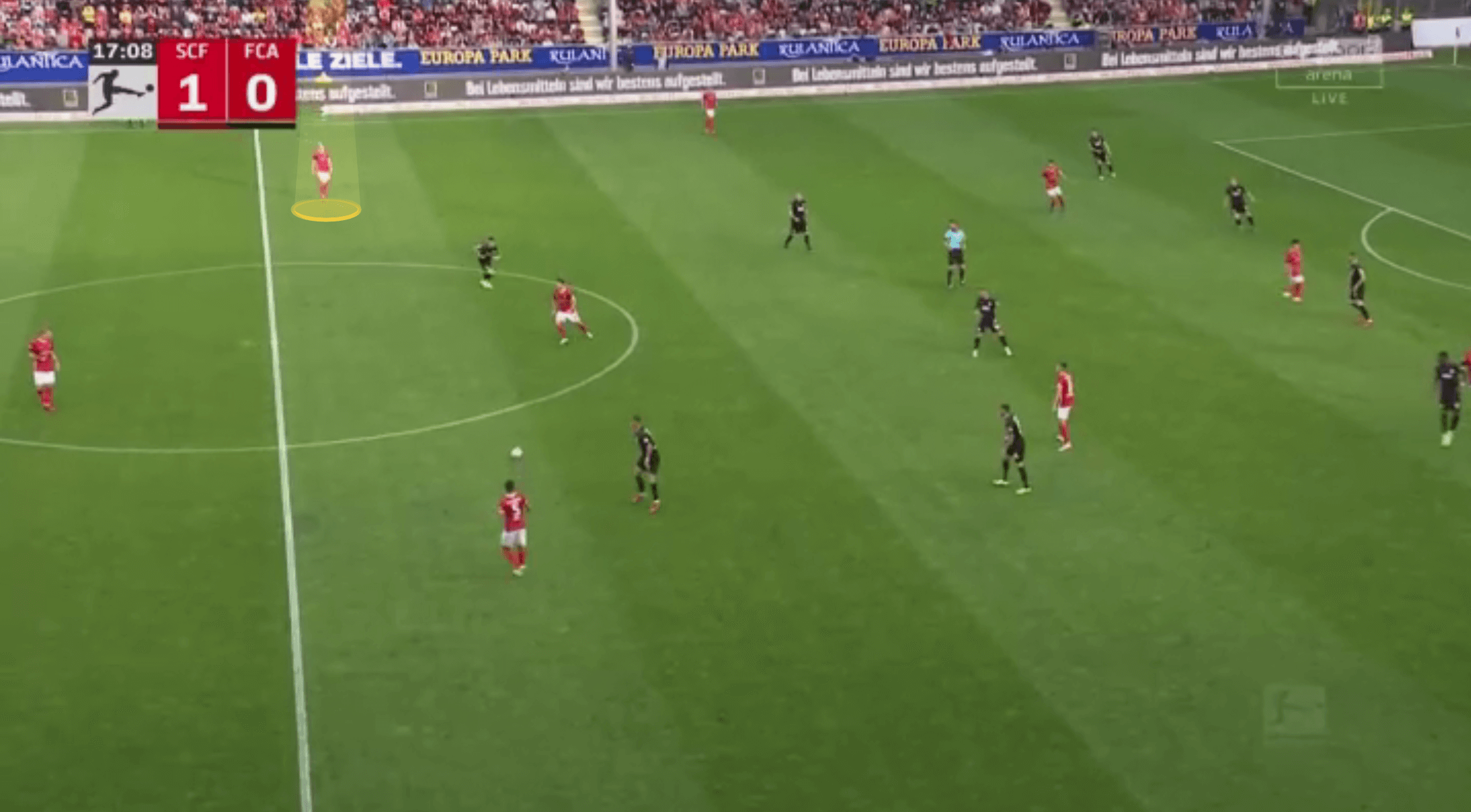 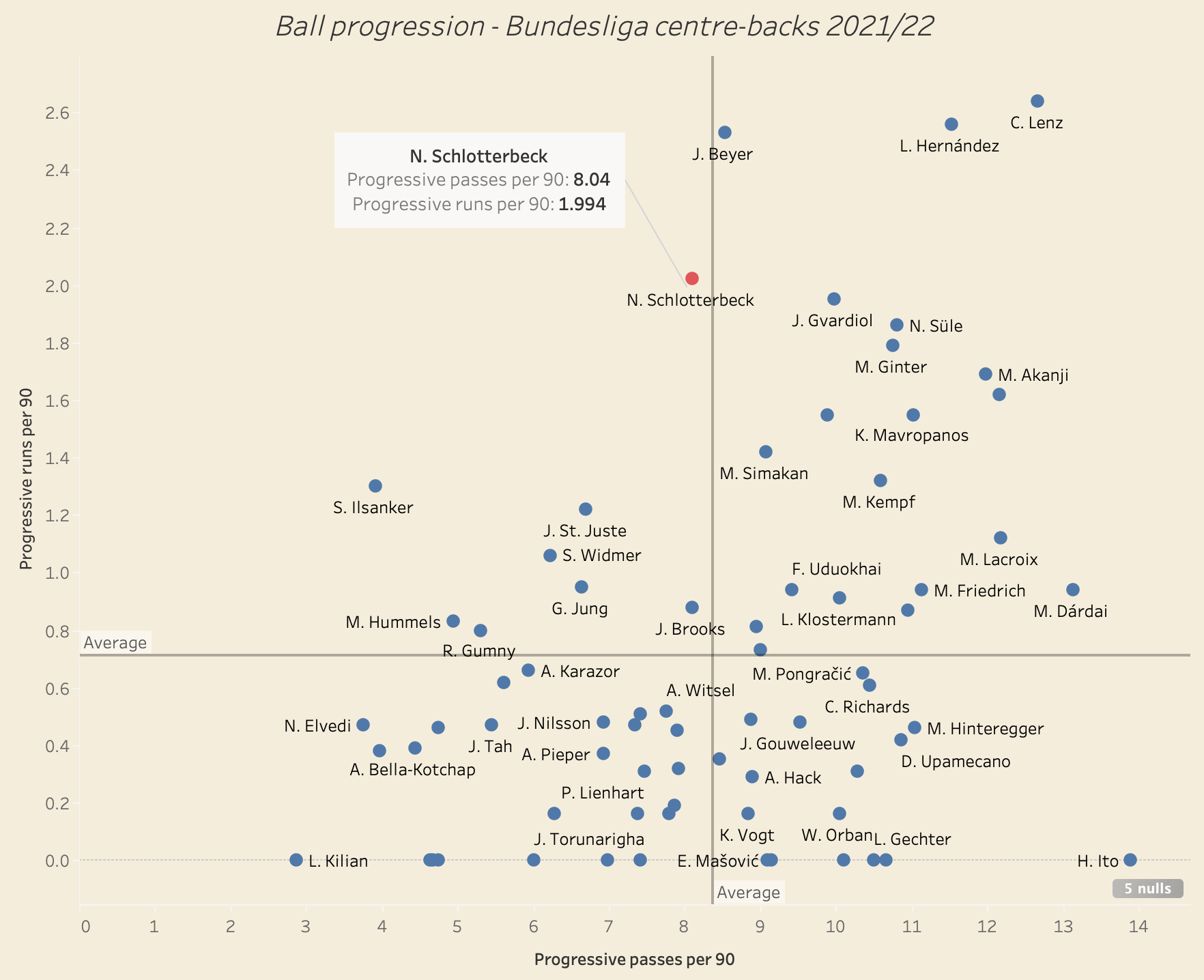 Schlotterbeck will drive forward on the ball if given any space to do so, but will also make runs off of the pivot in an advanced attack. He is less likely to do this when in a pairing but when playing as part of a back three he has more freedom to push forward at will and still leave two defensive teammates back. 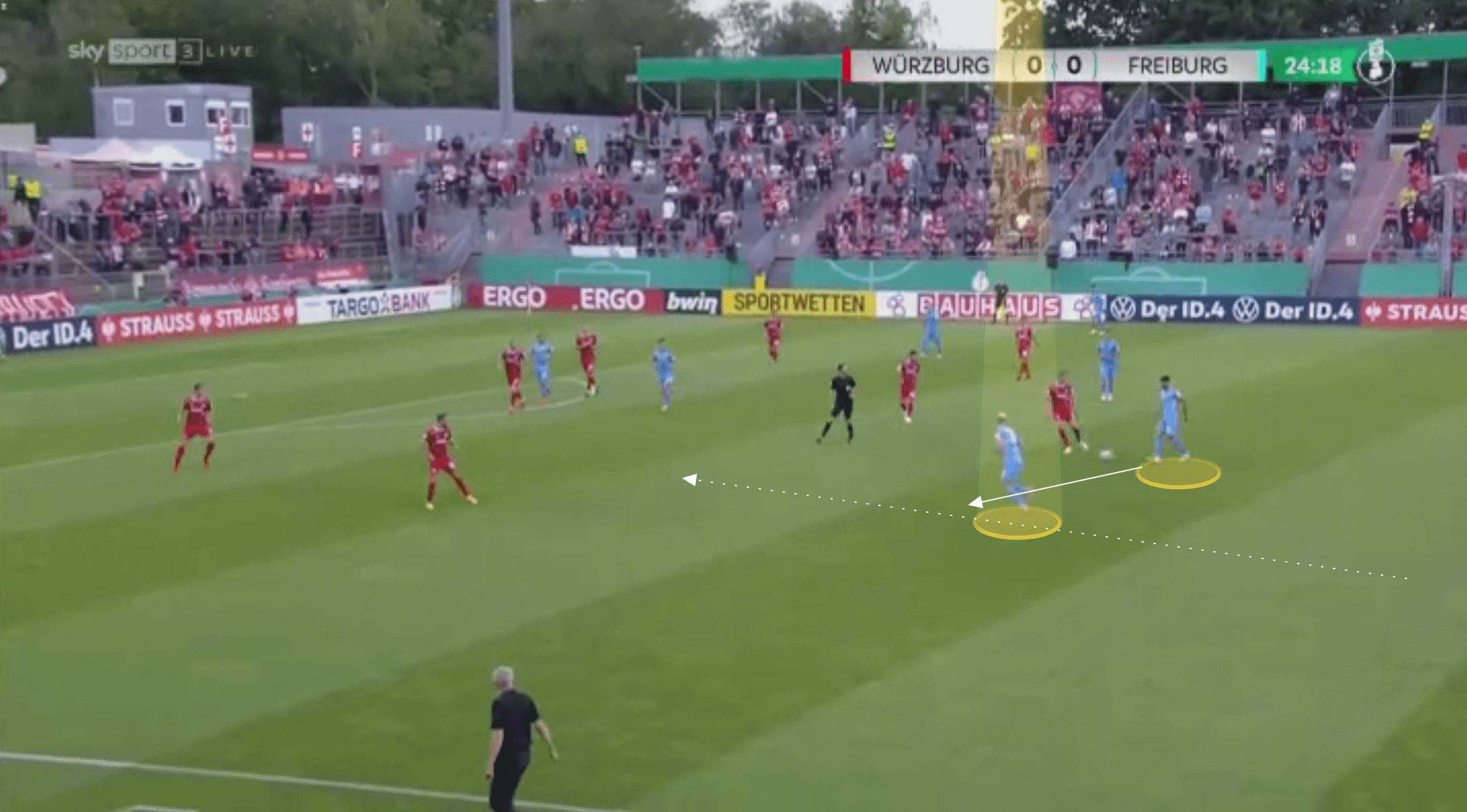 Schlotterbeck has attempted 3.11 dribbles per 90 so far this season – a relatively high number for a centre-back. He has completed 65% of these which is outstanding. He is just as able dribbling past the press as he is driving forward into space. Schlotterbeck will purposefully attack pressing forwards, shifting onto his left and getting his body between the defender and the ball. He may look to buy contact in this moment but equally, he may simply beat the player and move the ball on before they can recover. 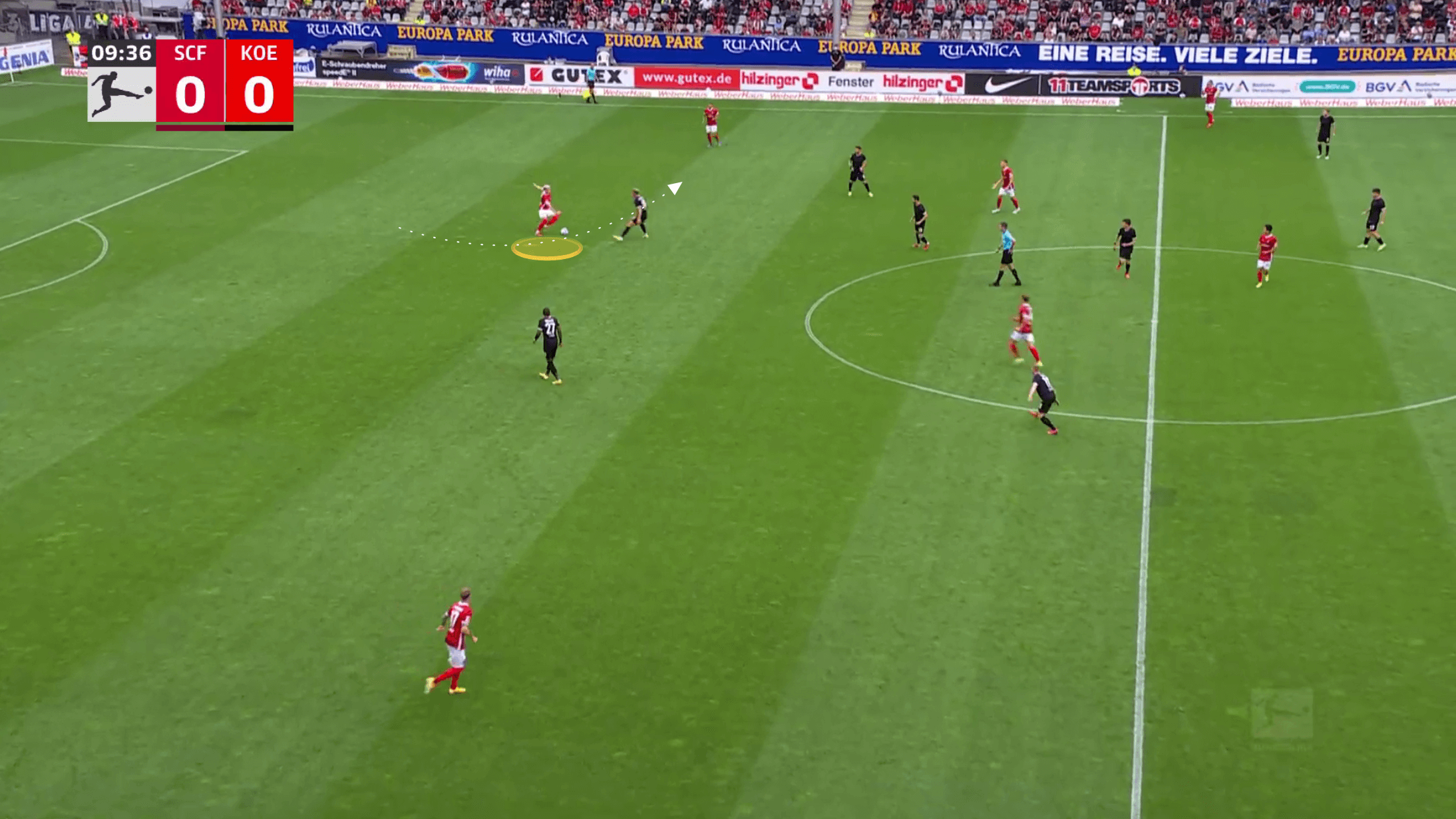 Schlotterbeck makes his decisions quickly on the ball. Whilst he is a highly competent ball player during build-up play, circling possession comfortably at a good tempo, he is also a positive player and will play forward and break lines when given the opportunity to. Schlotterbeck frequently takes one or two touches per possession and scans before receiving the ball. If he sees a chance to break lines he will take it on without a second thought. Schlotterbeck can punch passes through the lines with his left foot along the floor and can hit through passes with this technique. 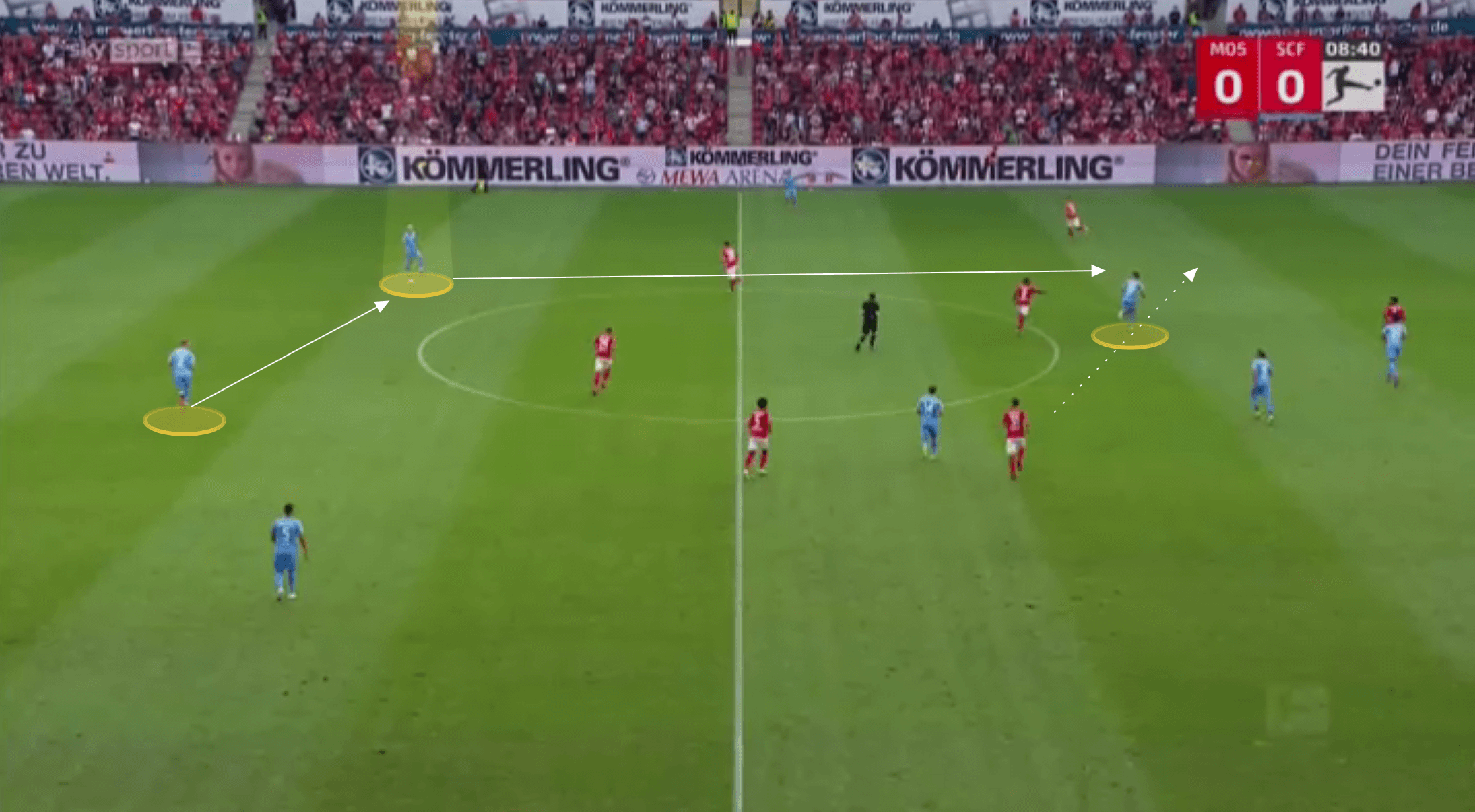 Schlotterbeck can also play more risky long passes, and with aerial balls may opt to hit the pass over the top. He sees rotations in the forward line and can exploit opposition centre-backs being drawn out of the backline. Below he hits the space behind the centre-back as one of the forwards drops deep to provide a shorter passing option as his teammate fills the space in behind. 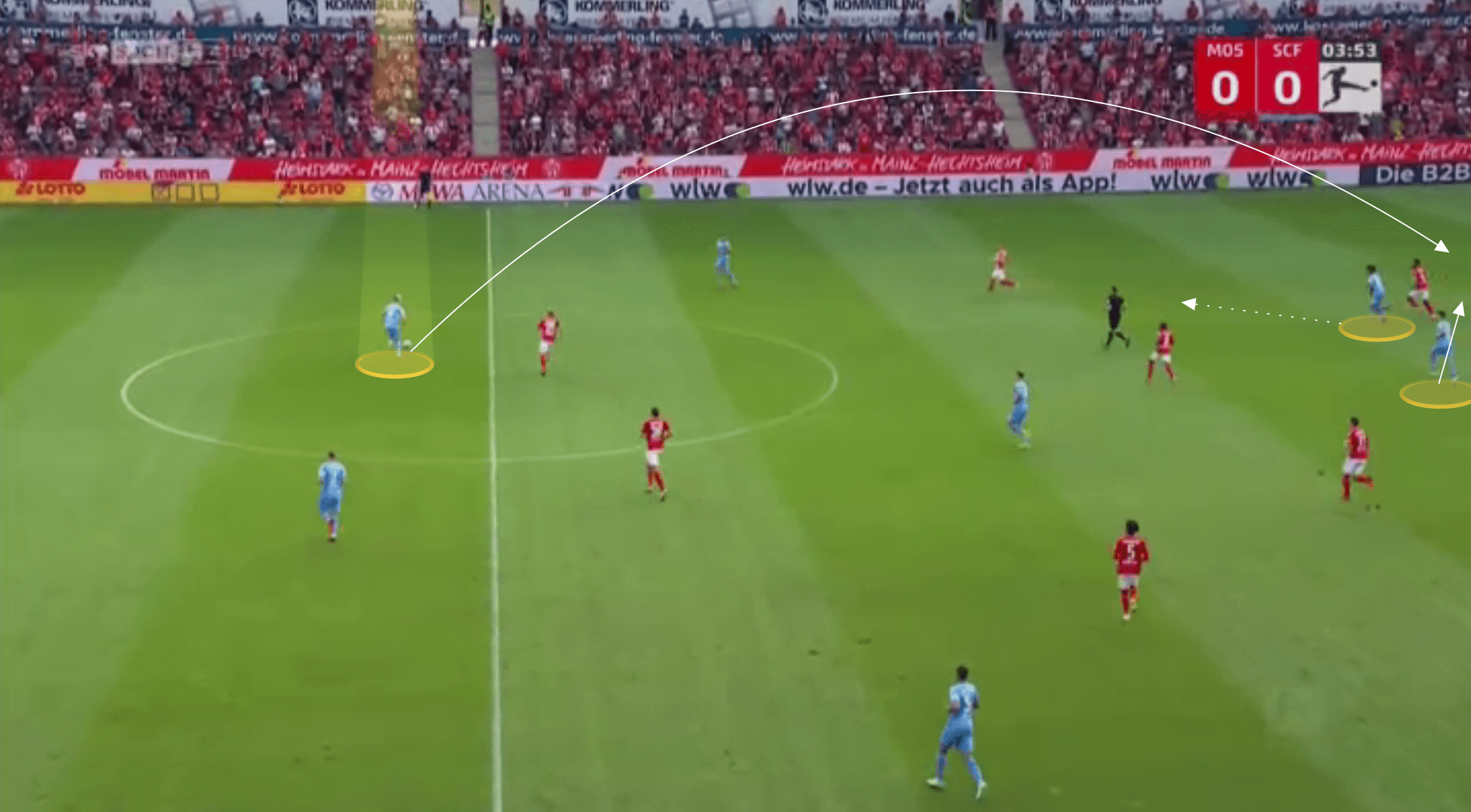 Finally, Schlotterbeck is able to switch play effectively, with excellent technique and accuracy. He can loft a pass diagonally but can also drill these kinds of passes if there is the need to hit the ball at a higher tempo. Most importantly, Schlotterbeck reads the moment perfectly when to hit this kind of pass. He understands how to draw the opposition across by engaging in quick combinations with players around him, and will then hit a pinpoint switch of play when he sees the opposition defensive shape shift across enough whereby this pass can create an attacking opportunity on the opposite flank. 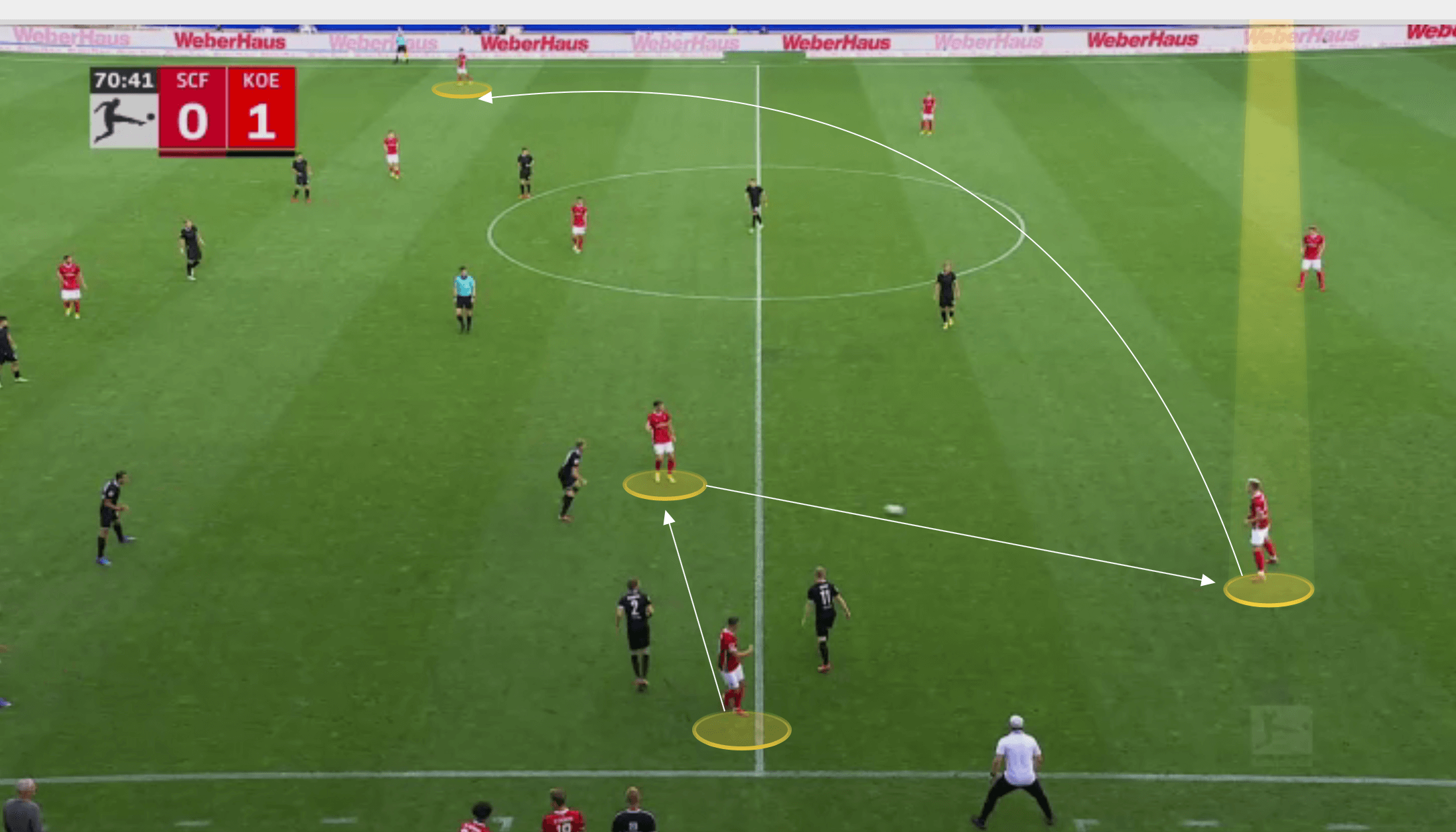 Although it is early days in the season, Schlotterbeck has done enough already to suggest this could well be a breakout season for the young German centre-back. Admittedly he performed admirably at Union Berlin last season, but even Streich must be pleasantly surprised by the quality of Schlotterbeck’s performances thus far. He is remarkably well-rounded for a centre-back at such a young age and possesses all the qualities required to be a top-level centre-back at European level. Should he continue to progress at his current rate it won’t be long before he is being linked with a host of likely candidates across Europe’s top five leagues.