SC Freiburg arrived in Dortmund looking to challenge Borussia Dortmund for their second win of their Bundesliga season so far. Meanwhile, Borussia Dortmund looked to rebound from a pair of defeats after losing to Bayern Munich in the DFL Supercup on Wednesday and Augsburg last Saturday. Luckily for Dortmund, they were far more successful in this match, finding the back of the net a total of four times on their way to a 4-0 victory. 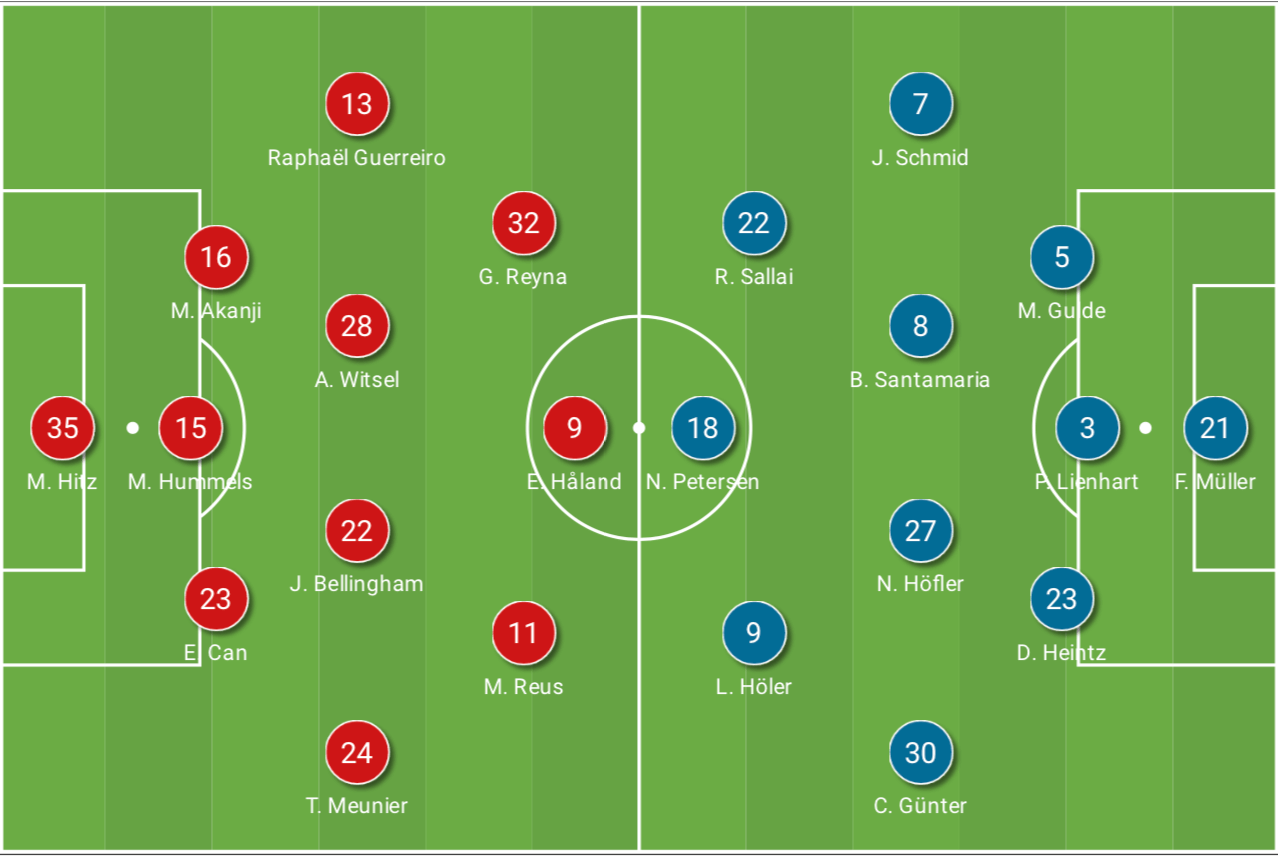 Streich sent Freiburg out in a 3-4-3 as well, although they primarily functioned in a more defensive structure, often a 5-2-3. Florian Müller started in goal with Dominique Heintz, Philipp Lienhart, and Manuel Gulde starting as the back three. Baptiste Santamaria and Nicolas Höfler were the central midfielders with Christian Günter to the left and Jonathan Schmid on the right. Nils Petersen started as the striker with Roland Sallai to his right and Lucas Höler to his left.

Freiburg are a consistently well-organised squad, particularly when defending. Their defensive set-up set the tone for the match. Despite the final scoreline, the analysis must examine what Dortmund were forced to deal with. Their compact defensive shape in their own half saw Freiburg take on either a 5-3-2  or 5-2-3 shape within their own half. This flexibility within the front five allowed them to provide pressure on different places and look to protect the centre of the pitch. 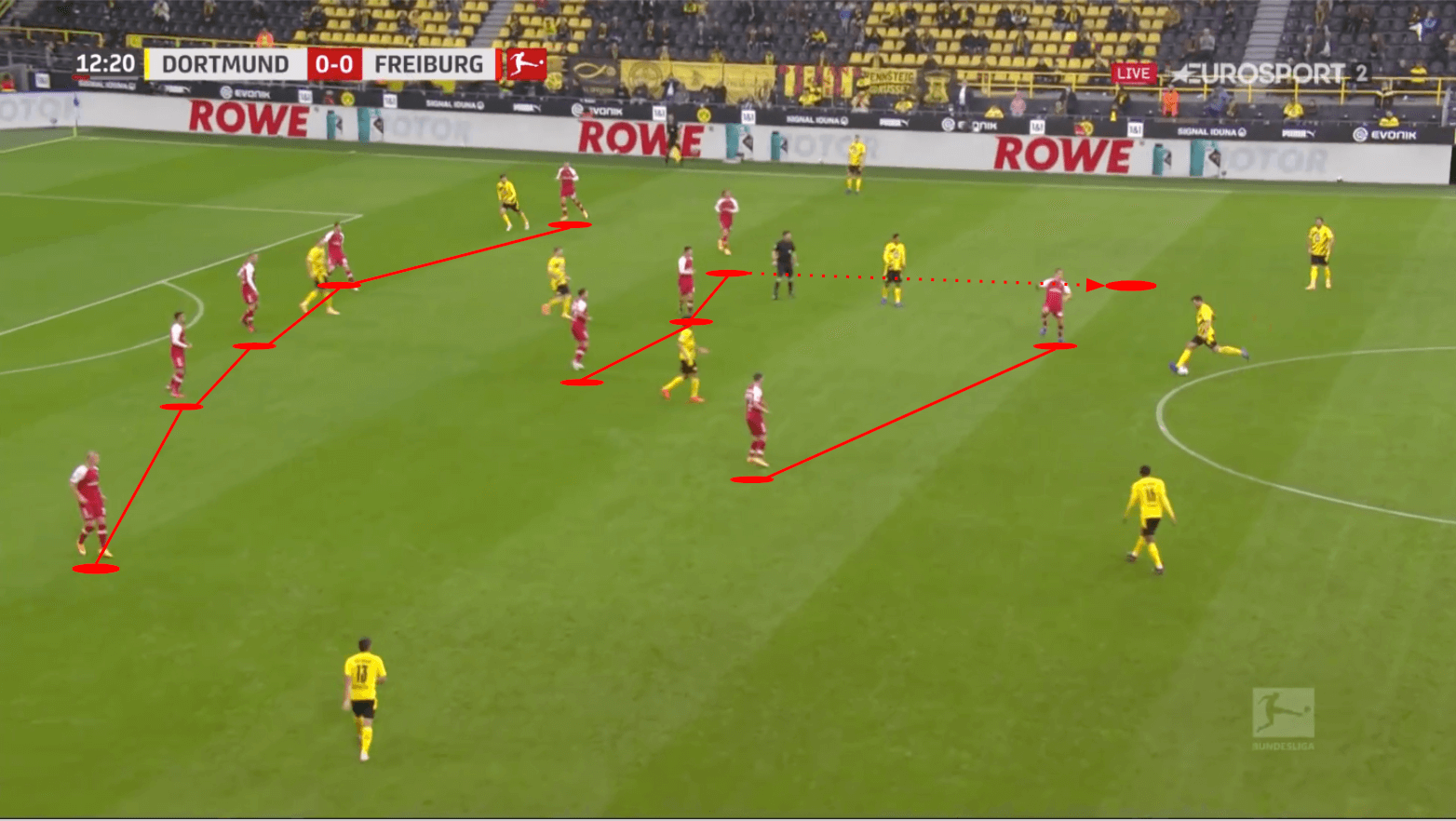 Above is the aforementioned 5-3-2. This shape was a result of Dortmund possessing the ball deeper in Freiburg’s half before bringing it back out to their back three. With this compact shape, Dortmund essentially have no passing options in the centre of the pitch, as Baptiste Santamaria, Nicolas Höfler, and Lucas Höler dropped to prevent any penetrative passes. The compact midfield line not only prevented passes into deep players like Håland or Reyna, but it also prevented the midfield pairing of Witsel and Bellingham from receiving the ball, encouraging Dortmund to move possession along the outside of their shape.

When Freiburg were pressing, which happened quite a bit in the first half when Dortmund saw 72% of the possession, they were able to match up with Dortmund’s shape well, as both teams found a 3-4-3 shape. 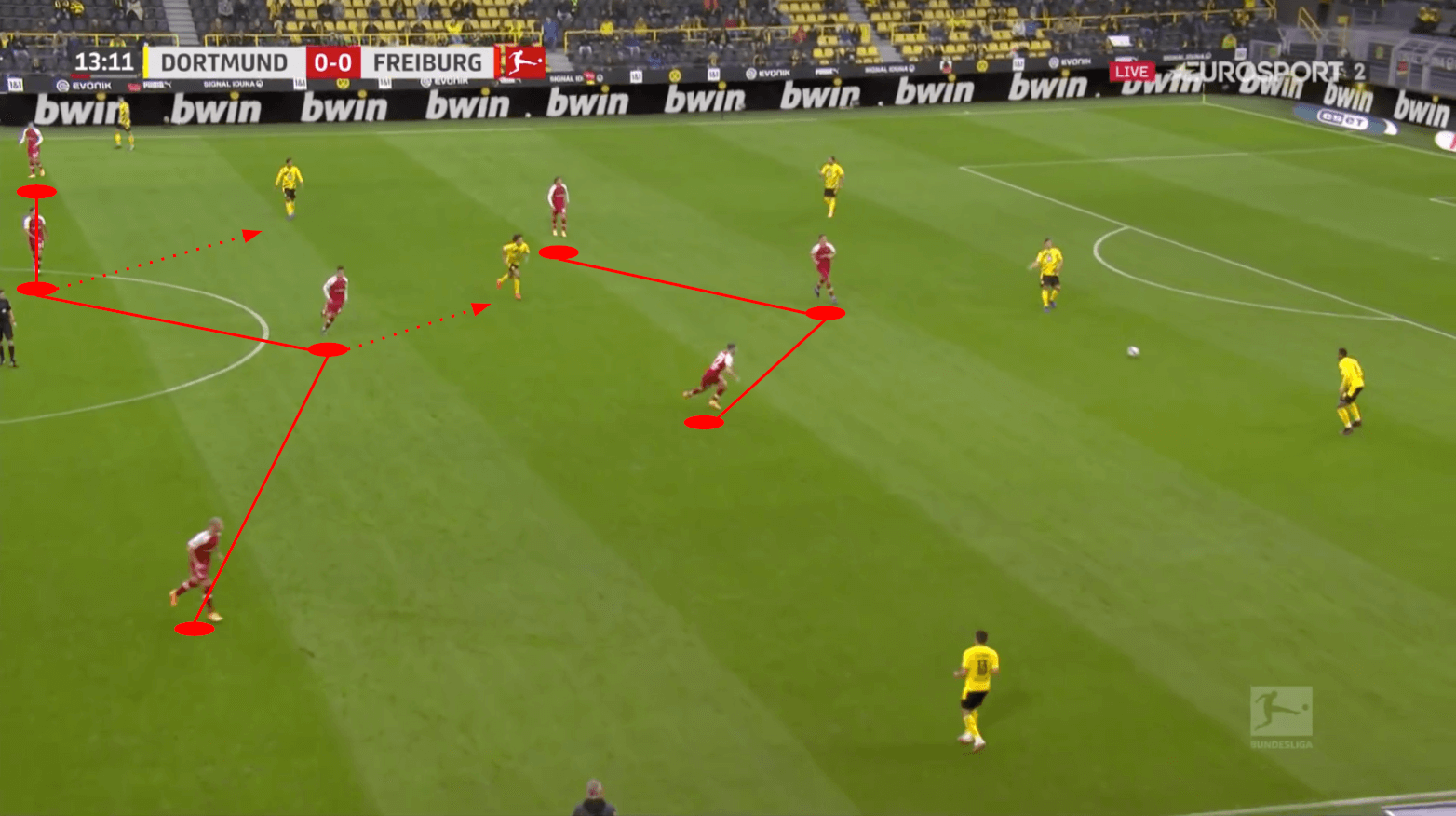 This meant that Dortmund’s backline each had a man who could provide defensive pressure on the man on the ball. In the image above, Freiburg’s front three press together, working to put pressure on the man on the ball, but also making sure that any potential passes into Witsel or Bellingham were once again blocked. Santamaria and Höfler did well to not follow Witsel and Bellingham as they trusted their front three to prevent any interior asses with their cover shadows. This meant that Santamaria and Höfler could protect the space in the centre of the pitch, reacting accordingly when Reyna or Reus would drop in to receive a pass. If a ball was played into those central players, Santamaria or Höfler would have to react quickly to press them and force the ball backwards.

Dortmund had some bright spots in their match (like Gio Reyna, who registered three assists), but for a lot of it they struggled to play through Freiburg’s defensive structures when in possession. While the scoreline suggests that they handled Freiburg quite easily, that came down to their impressive counter-attacking, which will be covered in the next section. Dortmund’s ability to get into Freiburg’s half didn’t necessarily come from their ability to play through Freiburg, but rather through their ability to win second balls and quickly move their defensive line up the pitch. When Dortmund did find success moving forward, it came from passing structures that saw them quickly move from the exterior of the pitch to the interior or vice versa. 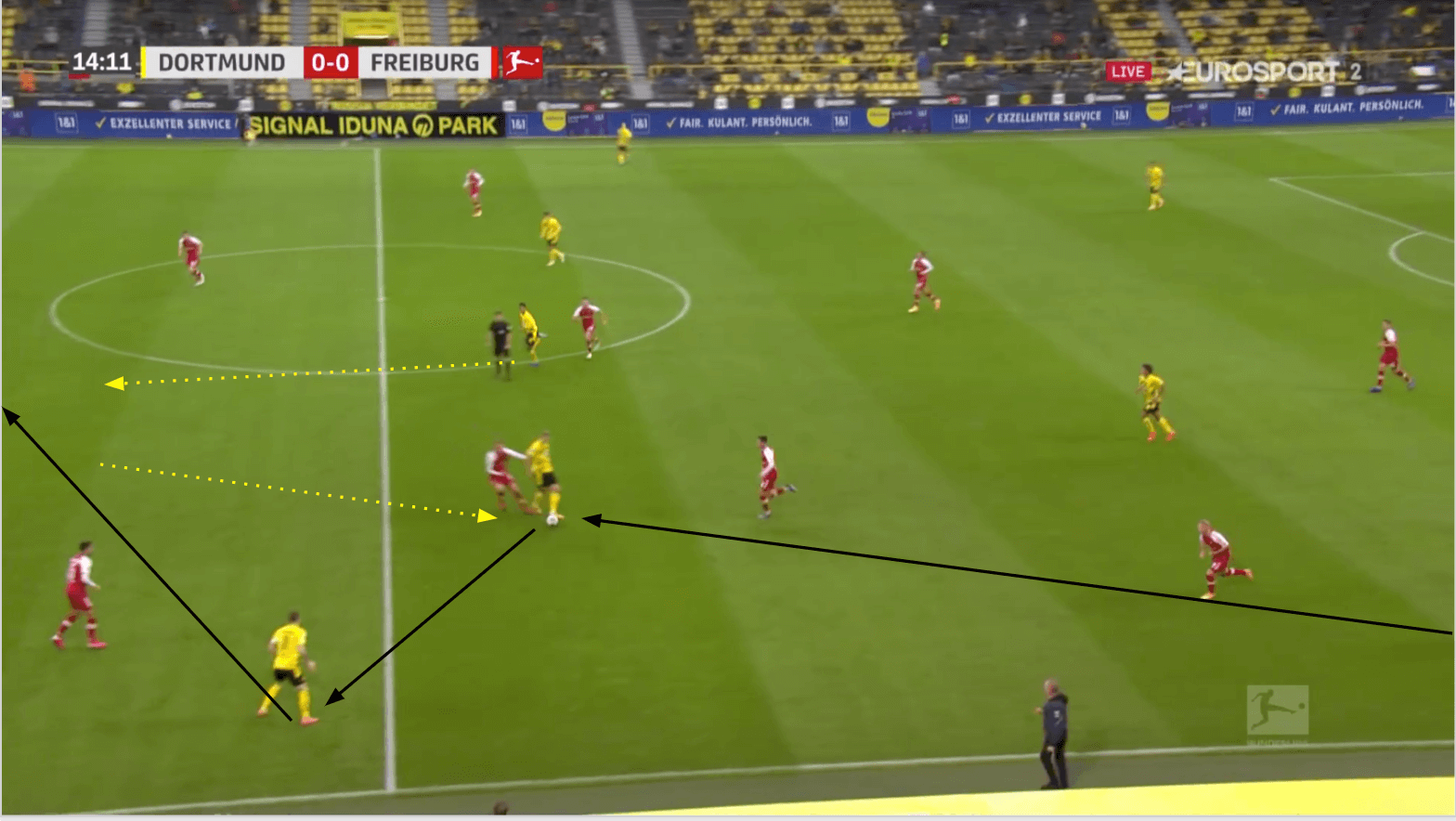 Here is our first example of Dortmund building up by transitioning from the outside to the inside. Akanji had played a pass outside to Guerreiro, who had dropped down from the wing to support the back line. As Guerreiro received the ball, he really couldn’t play a pass up the line, as Reus would not have been able to turn up the pitch, essentially forcing Dortmund back towards their own goal. Håland checked into the space from the centre of the pitch, receiving the ball and quickly laying it off to Reus. As Håland left his space, Jude Bellingham bursted forward, and the positional rotation found Dortmund in on goal. While Reus’ pass ultimately didn’t find Bellingham, the quick successive ‘exterior-to-interior’ passes found Dortmund with a man open in space. 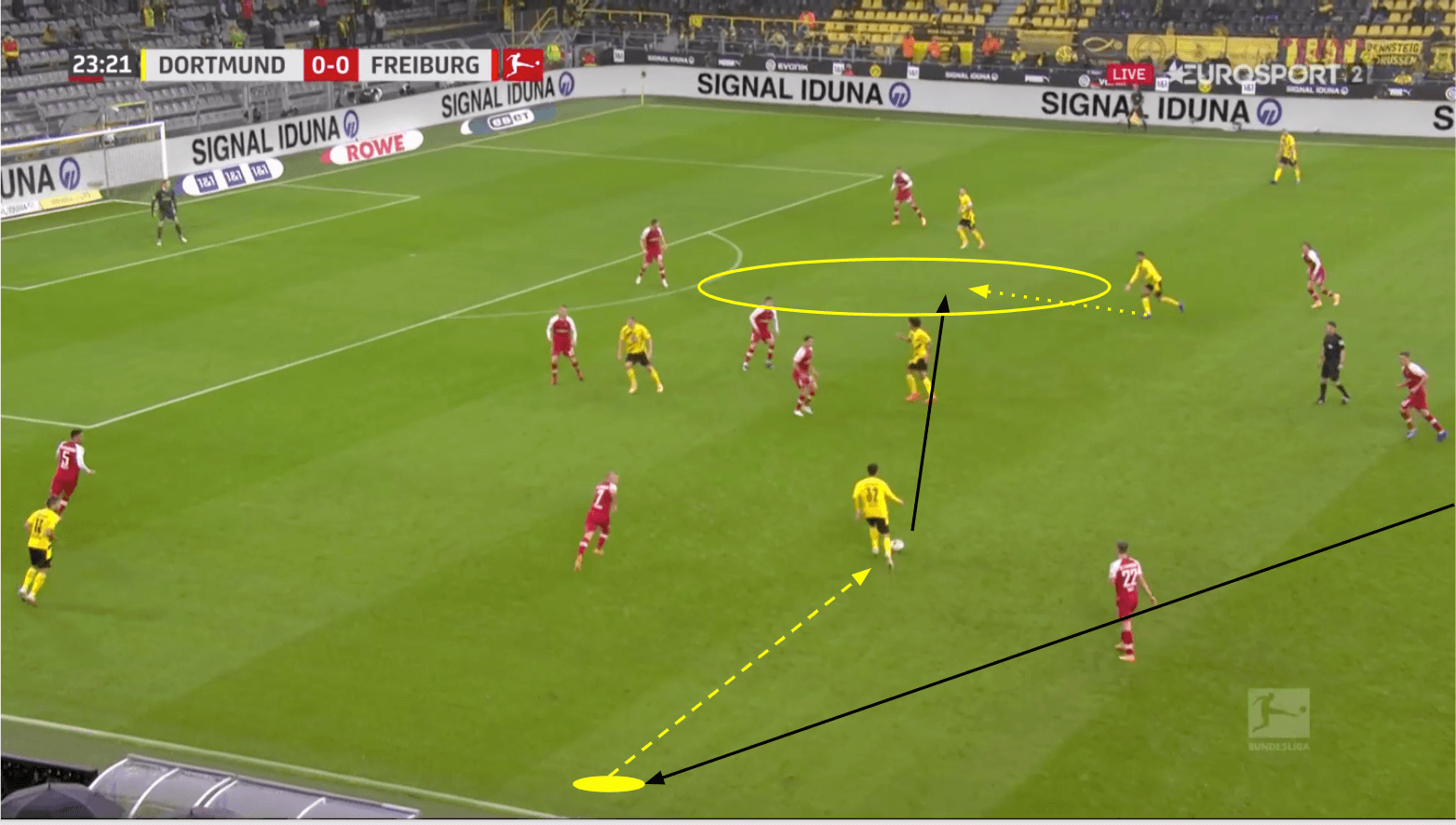 The passes didn’t even need to be successive in order for them to be successful. In the image shown above, Reyna received a pass on the touchline. The initial pass came from Akanji, who was positioned in the half-space. Reyna was able to dribble past his man, taking the ball towards this central part of the pitch. This forced defenders to both drop and find their mark, allowing Reyna time to pick his head up and identify the large amount of space available. Reyna wasted no time zipping a pass into Bellingham, who had timed his run exceptionally well. While Dortmund were unable to capitalise on the move, it was clear how they could play through Freiburg: quick movements that shifted the point of attack. 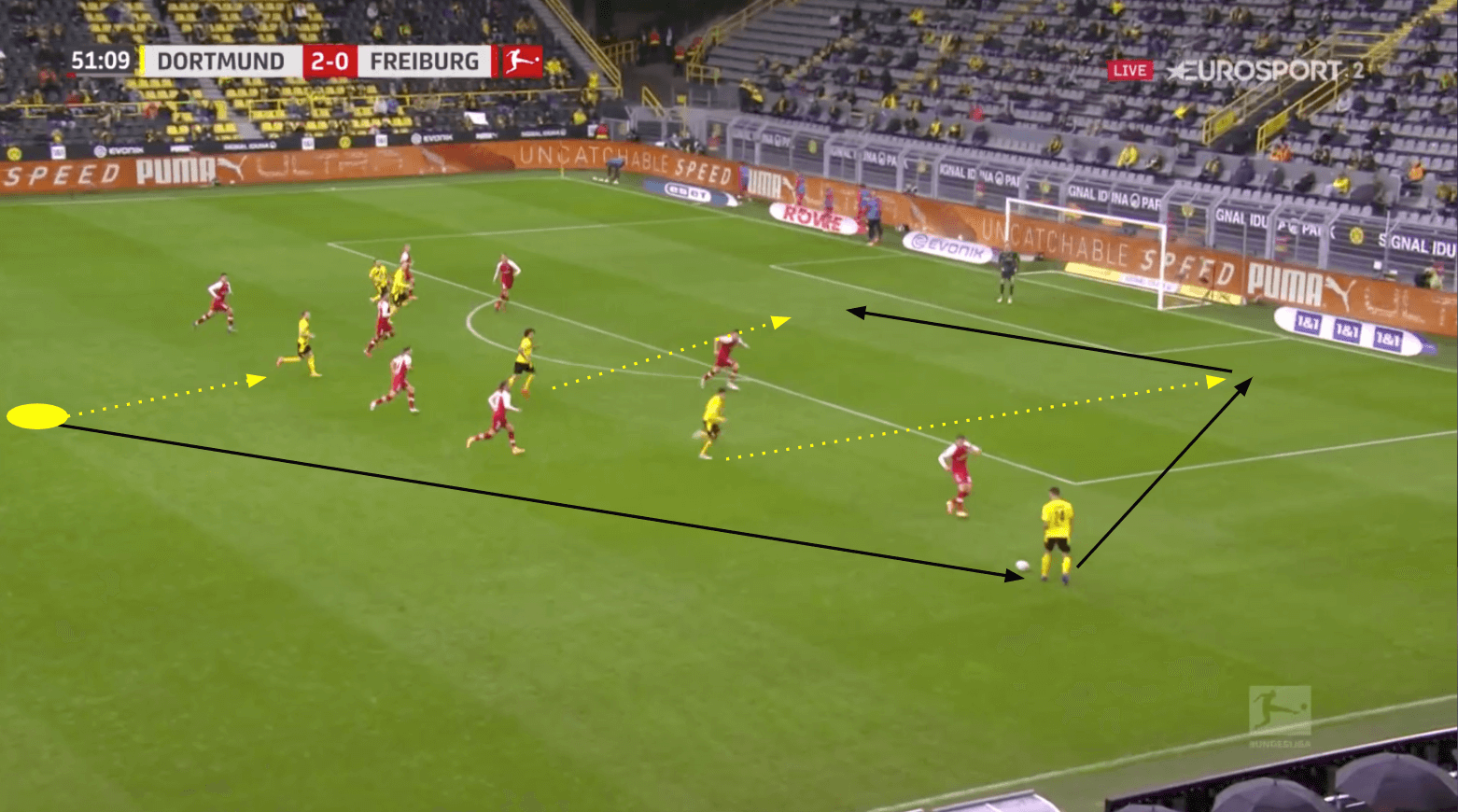 In the image above, Dortmund utilised passing from the interior to the exterior and then ultimately back inside. This movement quickly progressed through Freiburg’s defensive structure, forcing them to try and stay compact. The initial pass from Reus allowed the point of attack to shift. Freiburg’s back line was not compact enough, which allowed Reyna to run through the half-space in order to receive the pass from Thomas Meunier, who played the ball with his first touch. This quick movement of the ball combined with the movement from interior to exterior prevented Freiburg from organising. As a result, Reyna was able to fizz a pass to the top of the six-yard box, where Witsel somehow put the chance over the target.

While Dortmund’s ability to attack Freiburg’s defense was limited, they really excelled in taking advantage of the opportunities available on the counter-attack. This allowed them to put themselves ahead in the first half, forcing Freiburg to come out and commit more men forward, which meant that Dortmund had more space to quickly exploit when they regained possession. They were able to create these chances through their hard work and willingness to press Freiburg, particularly when they came from behind the player, catching them unaware and forcing them to lose possession in the process. 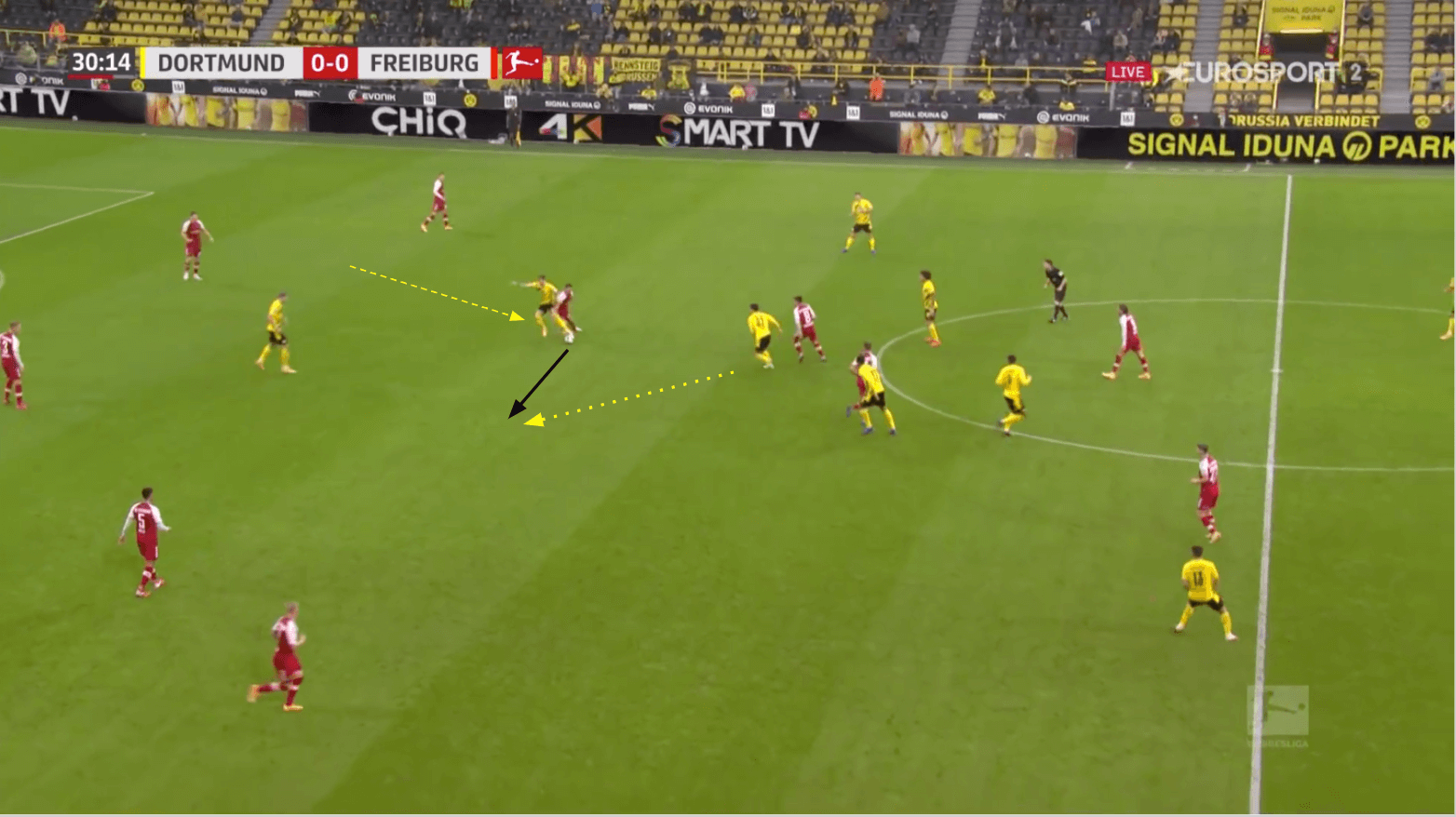 Their first goal stemmed from some excellent pressing from Reus on a pass that probably should have never been played. The back pass into Nicolas Höfler’s feet put him under immense pressure. What’s key to the success of this goal is Dortmund’s collective action. As soon as Reus pressures, Reyna also begins to step forward to also apply pressure. Reus won the ball so quickly that Reyna essentially received a pass from him with room to dribble at the defensive line. With Reyna in possession, Håland made a smart move in front of the centre-back, forcing him to either follow or stay on Reyna. The centre-back paused, creating just enough space for Håland to receive the diagonal pass and finish on his first touch. Within five seconds, Dortmund went from being out of possession to celebrating their first goal of the match. 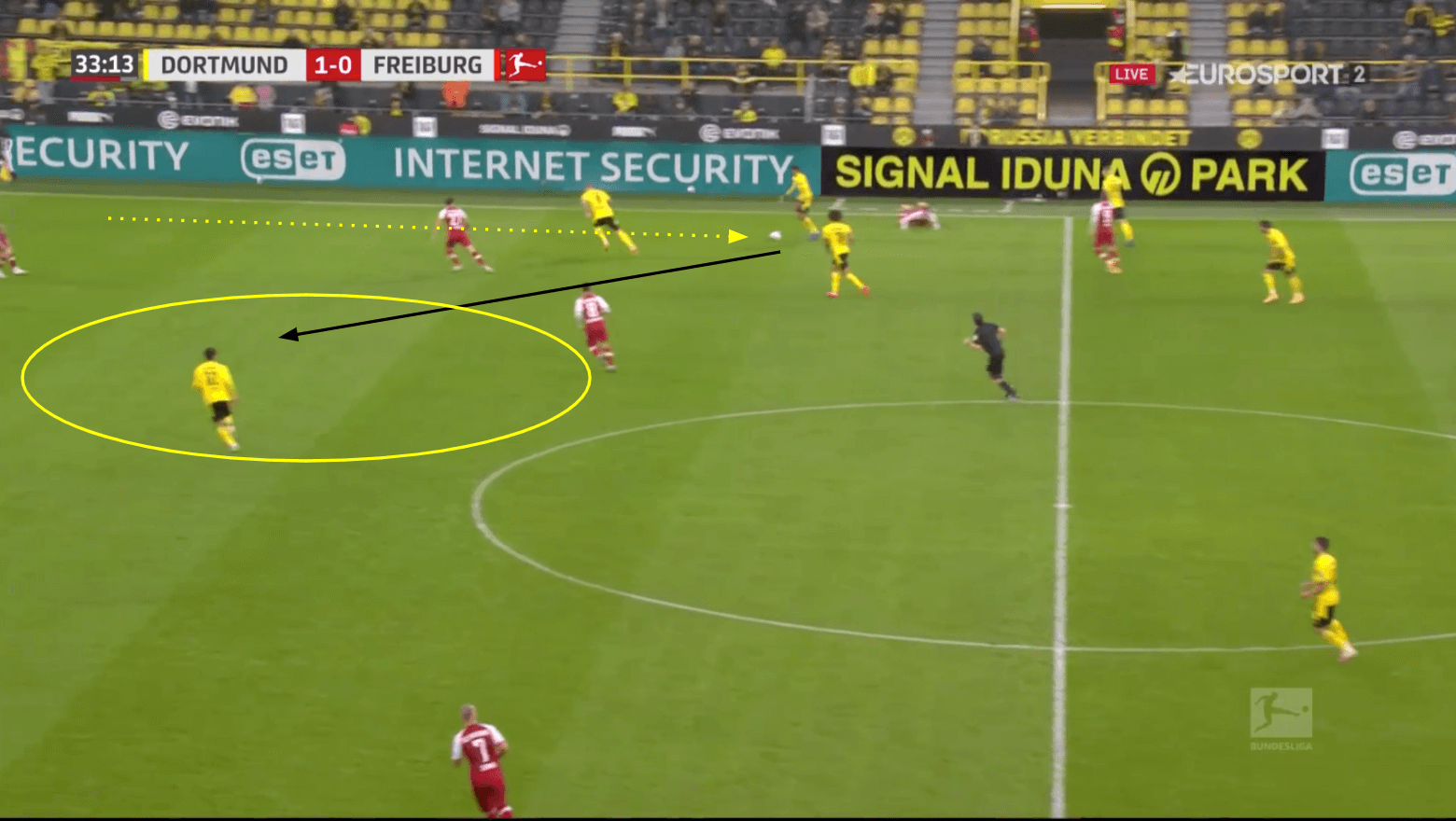 Minutes later, Reyna almost found the back of the net on his own after Dortmund won possession. The move started when Jude Bellingham put pressure on Christian Günter. This movement by Bellingham is pretty consistent with ice hockey’s ‘backcheck’, where a defender can come from behind and put an opponent under immediate pressure. It’s also incredibly similar to what Reus did for Dortmund’s first goal. Günter didn’t see the 17-year-old until it was too late: Bellingham dispossessed him and immediately turned and fired a pass into Reyna, (another 17-year-old), who once again had time and space to dribble at the back line. After cutting past two defenders, Reyna’s shot on target just went wide. 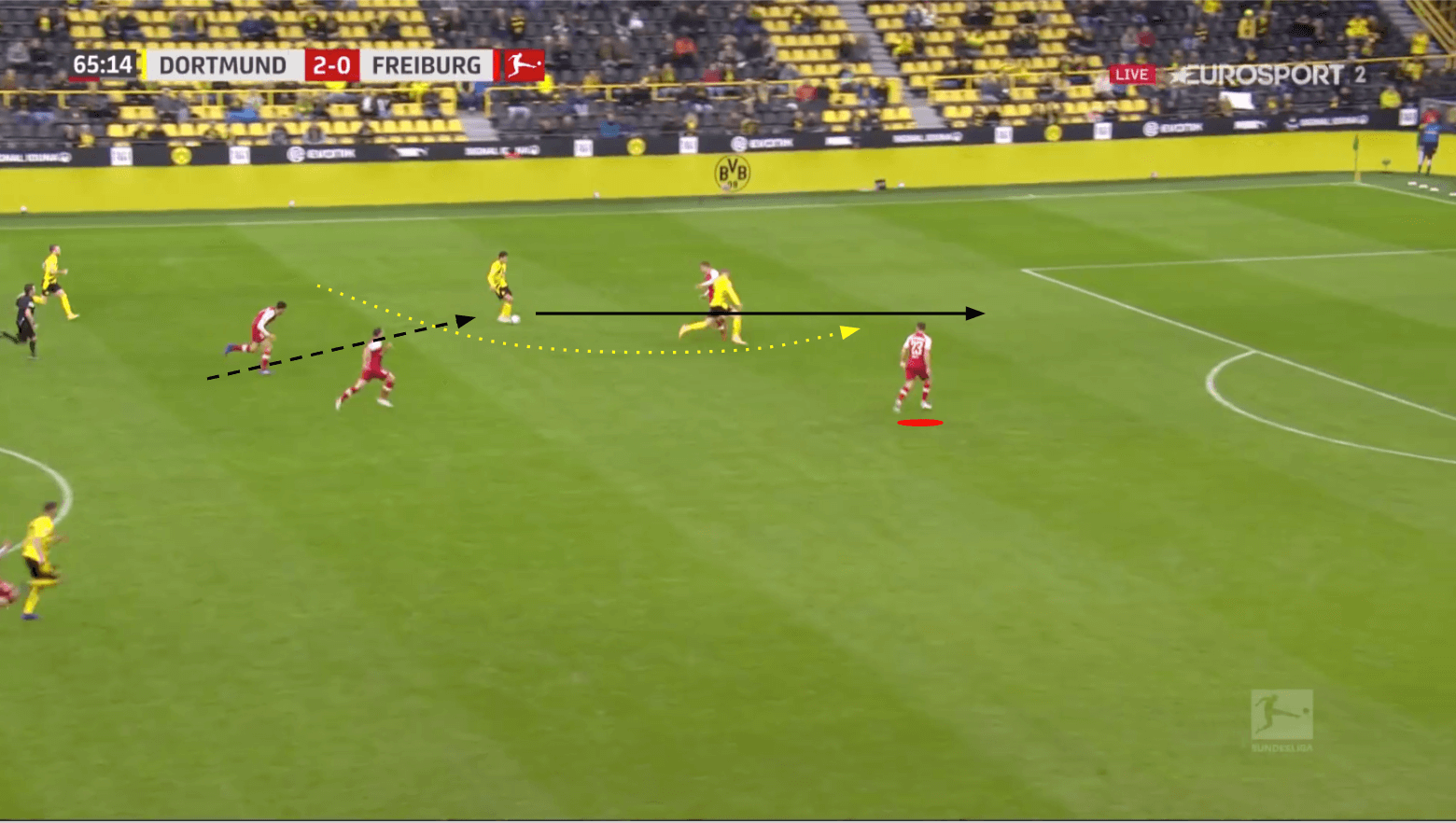 Dortmund’s third goal also came off of a transition that was initially started by a poor pass from Freiburg that created a 50/50 ball. Freiburg had committed men forward, but still maintained a +1 advantage on their backline. However, as Reyna sped in to win the loose ball, Keven Schlotterbeck lost the challenge and fell over. This created a 2 v 2 with Reyna and Håland bearing down on the two Freiburg defenders, Dominique Heintz and Philipp Lienhart. Håland and Reyna crossed paths, engaging Lienhart in a 2 v 1, where Reyna watched Lienhart’s movement, waiting for his slight pause when he switched from following Håland to trying to stop Reyna.

When the pause occurred, Reyna slipped Håland in with a well-weighted pass, who buried the chance in the back of the net, giving Dortmund the 3-0 lead. Heintz, marked in red, did his best to hold the line with Lienhart, but Håland’s run and Reyna’s pass were timed perfectly and thus his efforts were rendered ineffective.

While Freiburg had done well to set up defensively and prevent a lot of chances from Dortmund’s attack, they did not do well enough to prevent Dortmund’s counter-attacks. This led to a slew of goals, ultimately allowing Dortmund to secure the victory. After the international break, Freiburg will take on Werder Bremen, who have already secured six points this season. Dortmund will take on Hoffenheim, who dropped all three points to Eintracht Frankfurt on Saturday.