Bayern Munich had the opportunity to delay the start to their Bundesliga season because of their victory in the UEFA Champions League last month. The Bavarian club could have had a couple more days of rest and preparation before beginning their 20/21 campaign, but they instead opted to keep with the tradition of having the previous year’s title winner host the opening match. It was quite clear that Bayern did not need time to prepare for their opponent, as they defeated Schalke 8-0 in their opening match.

This tactical analysis will examine the tactics used by Hansi Flick and David Wagner in their opening-day match. The analysis will examine how Bayern used the half-space to overwhelm Schalke, how Schalke didn’t do themselves any favours with their defensive set-up, and how Leroy Sané fits into Bayern’s game model. 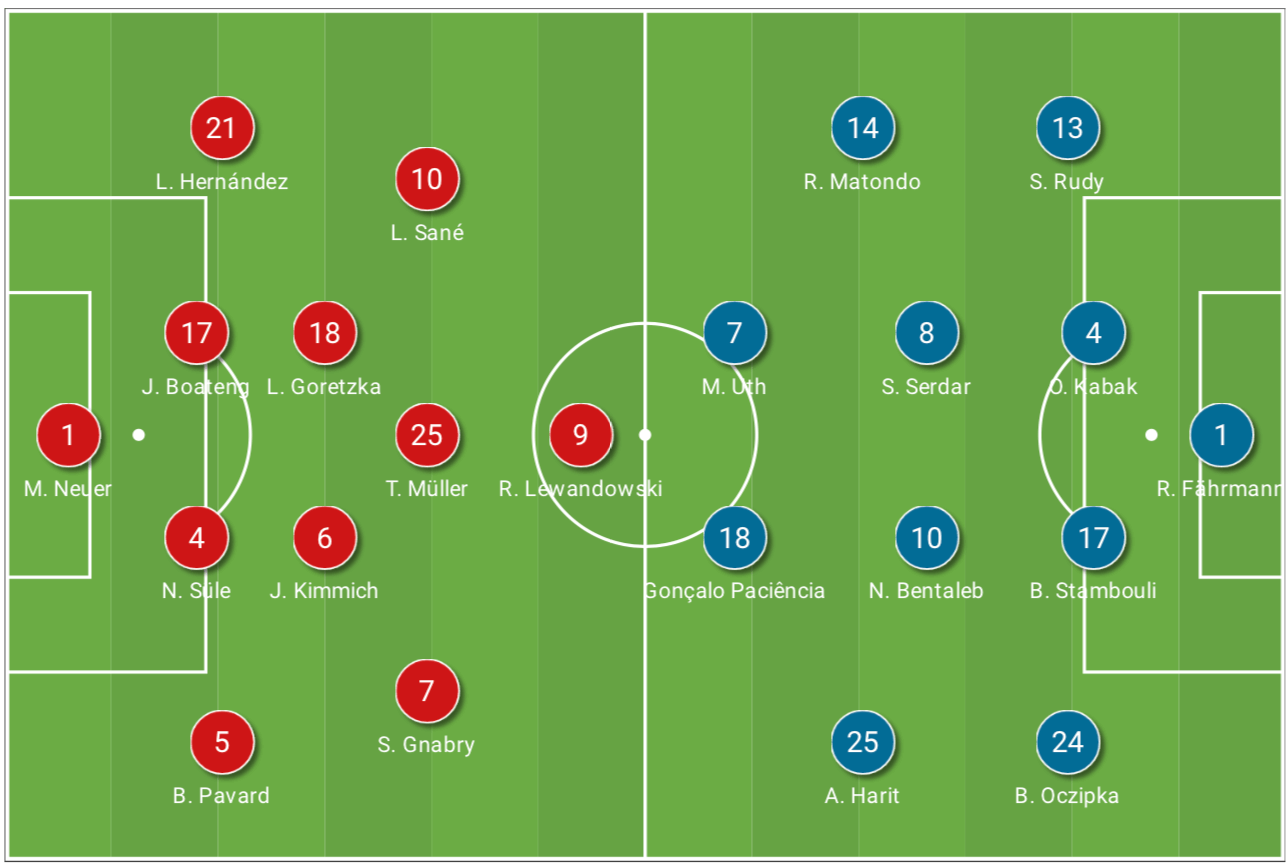 Bayern Munich came out in their 4-2-3-1 with Manuel Neuer in goal for Hansi Flick. Their two centre-backs were Niklas Süle and Jérôme Boateng with Benjamin Pavard starting as the right-back and Lucas Hernandez as the left-back. Joshua Kimmich and Leon Goretzka started as the two holding midfielders, with Thomas Müller in front of them. Leroy Sané, fresh off his transfer from Man City, started on the left wing, Serge Gnabry started on the right wing, and Robert Lewandowski began the match as the team’s forward.

David Wagner sent his squad out in a 4-4-2 with Ralf Fährmann in goal. Schalke started Bastian Oczipka, Benjamin Stambouli, Ozan Kabak, and Sebastian Rudy in their back line, with Rudy and Oczipka as the full-backs. Nabil Bentaleb and Suat Serdar started as the central midfielders with Amine Harit on the left wing and Rabbi Matondo on the right. Their two forwards on Friday evening were Gonçalo Paciência and Mark Uth.

Bayern overwhelm through use of half-space

Bayern Munich’s use of the half-space is one of their greatest strengths. Their principles of positional play allow them to create a lot of width in attack, which results in them having more room in the half-space to operate. Against Schalke, they looked to play through the half-space in a variety of ways that ultimately broke Schalke’s will as the match progressed. 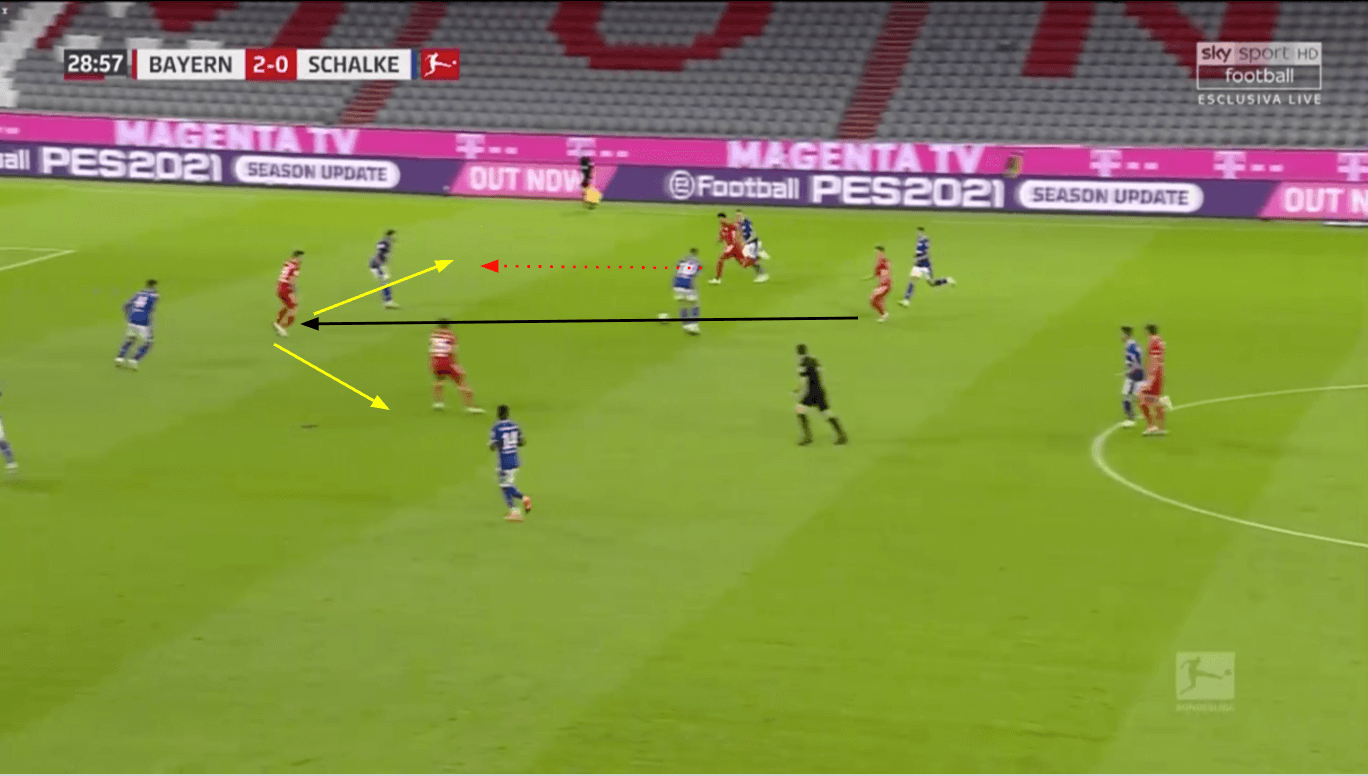 One of the ways in which Bayern was so successful was through their angles of support when a player was about to receive the ball in the half-space. The timing on this was so important for their success. In the image above, Robert Lewandowski was about to receive the ball from Joshua Kimmich in the half-space. Lewandowski had positioned himself in between Schalke’s two centre-backs, causing confusion about who should step to pressure him.

The angles of support by both Müller and Gnabry continue to cause confusion for the defenders. Lewandowski had both men as a supporting option; this made the centre-backs’ jobs even harder because they have to quickly decide where to step and give up space. In this instance, Müller and Gnabry froze the defenders, allowing Lewandowski to turn and dribble into the area, winning a penalty in the process as he was brought down from behind. 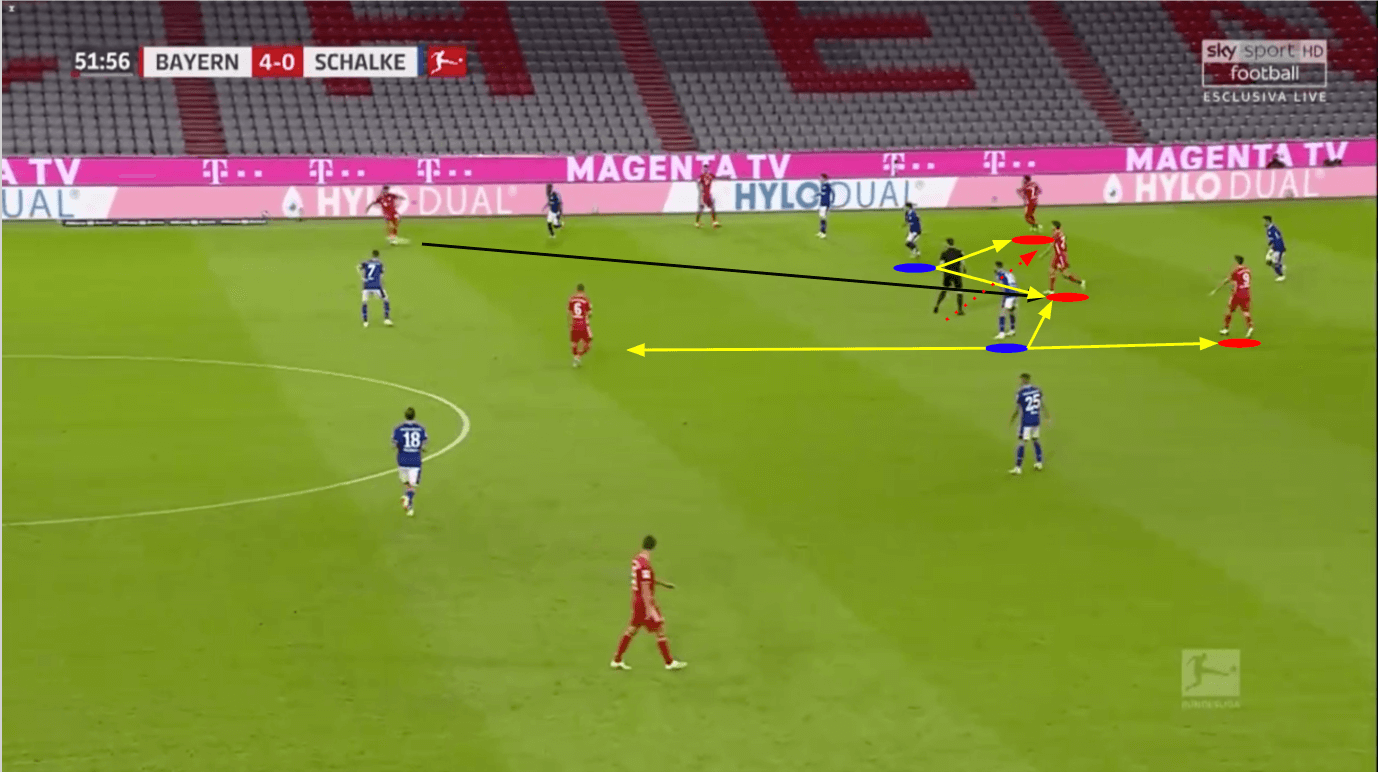 At times, Bayern overwhelmed Schalke’s defenders simply by outnumbering them and positioning themselves properly. In the image above, Gnabry had just completed a run through the half-space, dragging a Schalke defender with him for a second or two. As he made his run, Müller and Lewandowski occupied the half-space. This overload of the half-space causes confusion for the Schalke midfielders because they’re trying to prevent interior passes from Corentin Tolisso, the man on the ball.

However, in order to prevent those passes, the Schalke players have to be aware of the two or even three passing options that Tolisso has. The yellow lines highlight all the different men that the Schalke defenders have to consider as potential passing options. While this only causes a second of confusion or indecision, that is enough time for Tolisso to play a pass into Müller, breaking lines of pressure in the process. 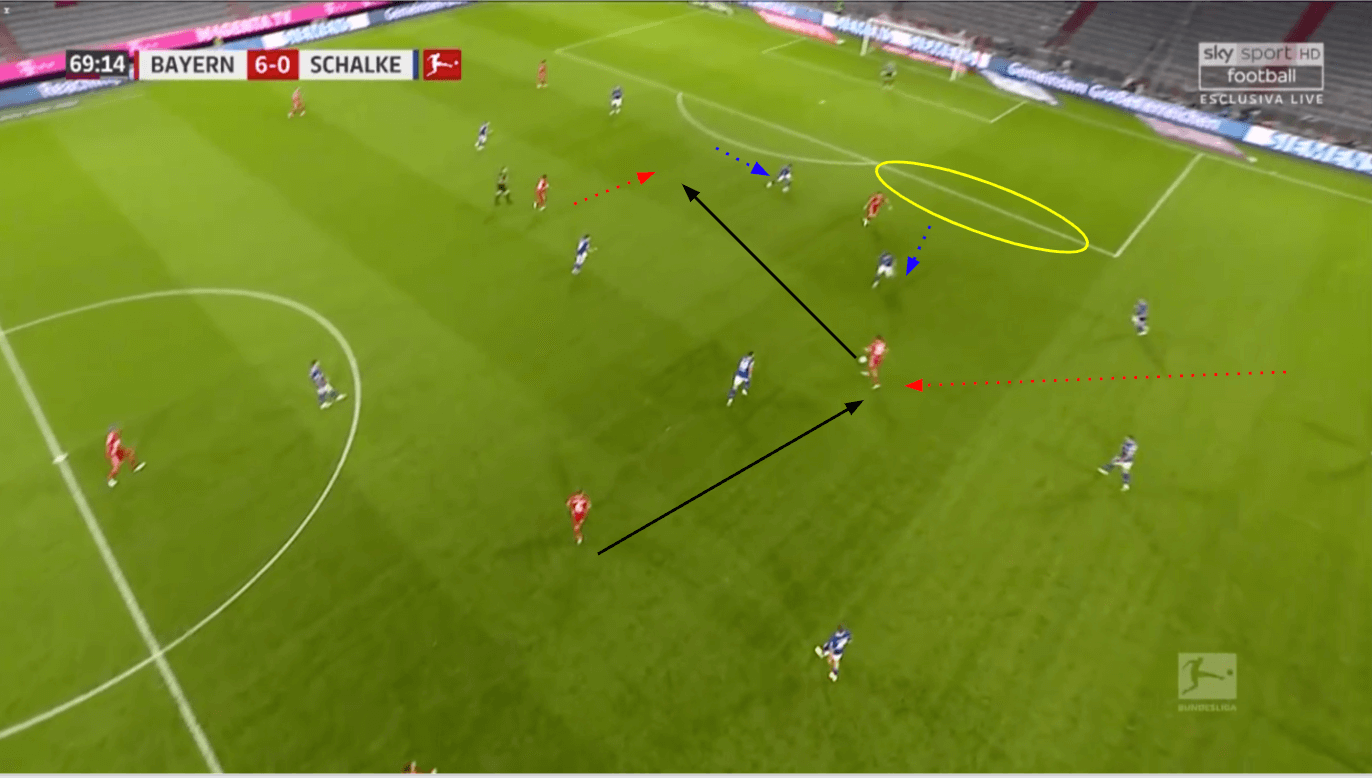 The timing of when Bayern receives the ball in the half-space is also incredibly important for their success. The arrival of a single player in the half-space at the right time is enough to break down a defence that is lacking confidence. In the image above, Müller checked into the half-space and received the ball from Kimmich right when he arrived. Because he wasn’t waiting in the half-space, Schalke didn’t have time to prevent a ball into him with a cover shadow, nor did they have time for someone to pressure Müller from behind.

This resulted in a chain-reaction of movement that ultimately saw Bayern score their sixth goal. As Müller received the ball, the left centre-back (Kabak) stepped to pressure him, opening up space behind him in the process. This space was covered by the other centre-back (Stambouli) as Lewandowski was making a run in behind. What that meant was there was now a clear channel right through the centre of the pitch for Tolisso to run into and receive the ball directly in front of goal. While the execution wasn’t flawless, this ultimately allowed Bayern into the penalty area and allowed Lewandowski the time and space to deliver his rabona assist.

Schalke started the match in a 4-4-2 defensive structure. They looked to deny passes into the centre of the pitch, particularly with the use of the midfielders’ and wingers’ cover shadows. While this was somewhat successful, the emphasis on the use of their cover shadows saw them step back and deny passes inside rather than provide direct pressure to the man on the ball. This lack of pressure combined with a high back line (and Bayern’s incredible speed) caused them a lot of trouble. 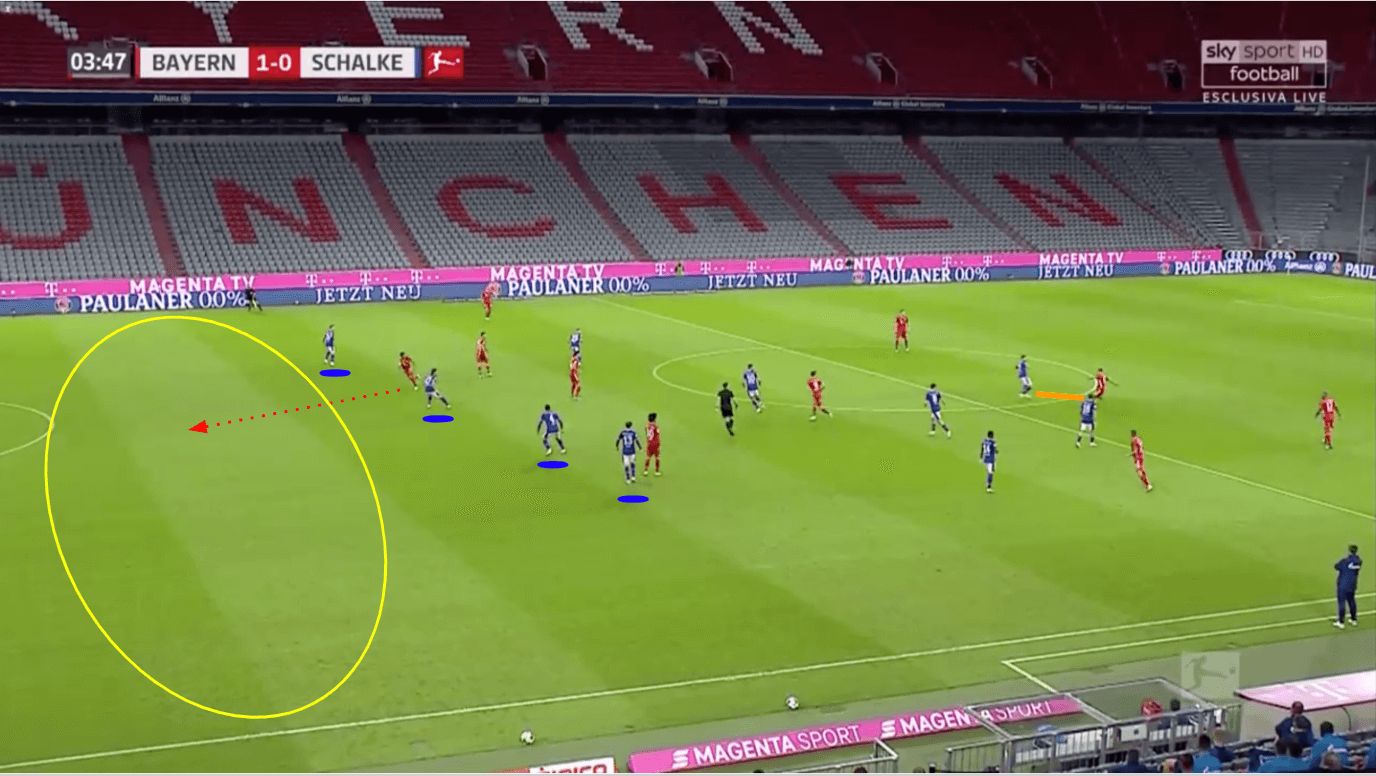 For Bayern’s first goal, Schalke’s back four was playing a fairly high line considering the amount of speed that Bayern possessed. It’s possible that Schalke’s back line was drawn higher up the pitch because of the number of players Bayern had between the two defensive lines of pressure. This high line opened up a lot of space behind itself for Gnabry and Sane to run into.

The real problem is that those two were able to get service into that space. While the high line can work, it’s rendered ineffective when the players in front of it don’t provide pressure. In the image above, Kimmich had received the ball before Uth pressured him. The half-second that Uth took to provide the pressure was enough time for Kimmich to recognise how much space was available and pick out a pass to Gnabry, who did well to control it and bury the chance in the back of the net. 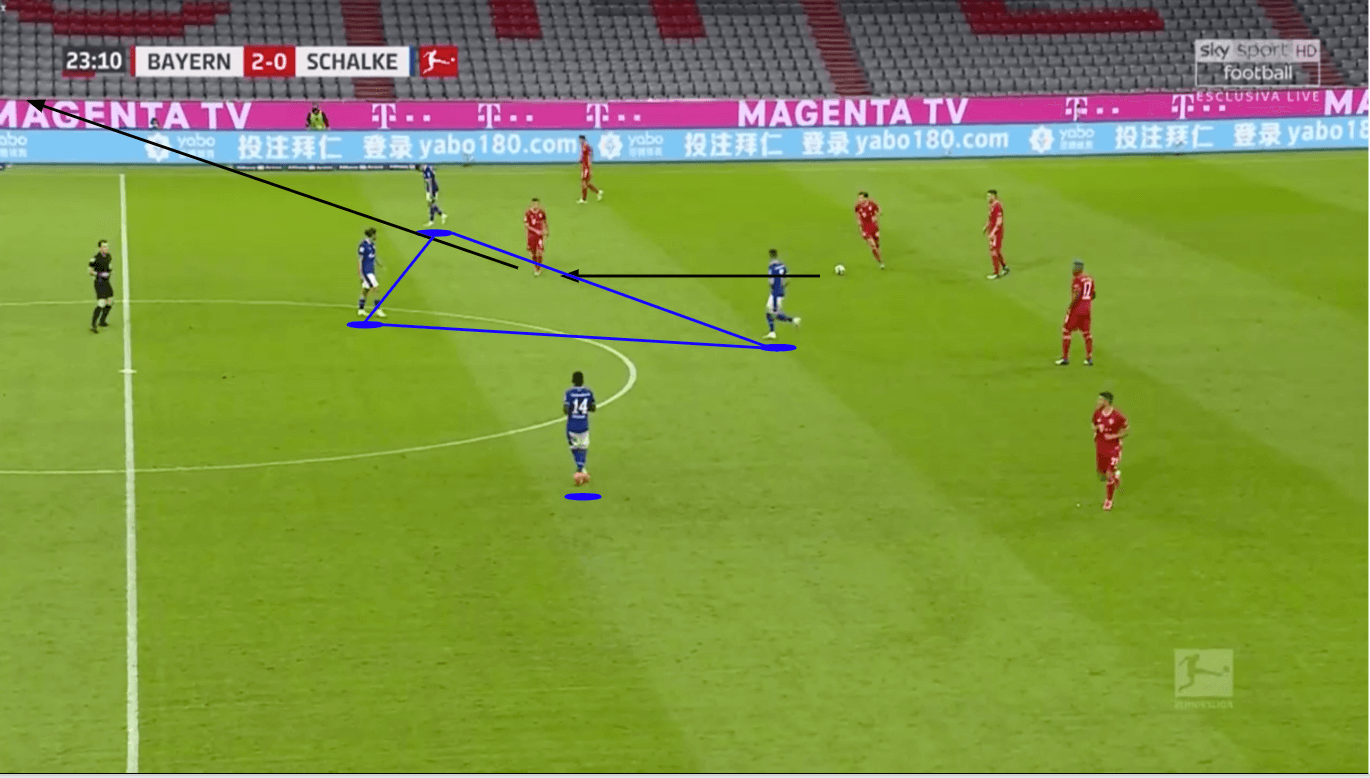 Despite being burned by it initially, Schalke didn’t seem to respond by adjusting anything, and the problems continued. In the image above, Bayern had regained possession, and Schalke seemed to believe that it was a time to reset and organise. Goretzka was on the ball when the four Schalke attackers provided very little pressure on him. He picked out Kimmich, who had been scanning before receiving the ball.

Despite being surrounded by three Schalke players, none of them stepped to provide any sort of pressure on him. This allowed Kimmich to quickly turn and play a ball again over the top of the defence into the space behind the back line. Gnabry was able to control and Bayern were actually quite wasteful with Leroy Sané, who was unmarked on the back post, mistiming his touch and missing out on an opportunity to put Bayern ahead by another goal. 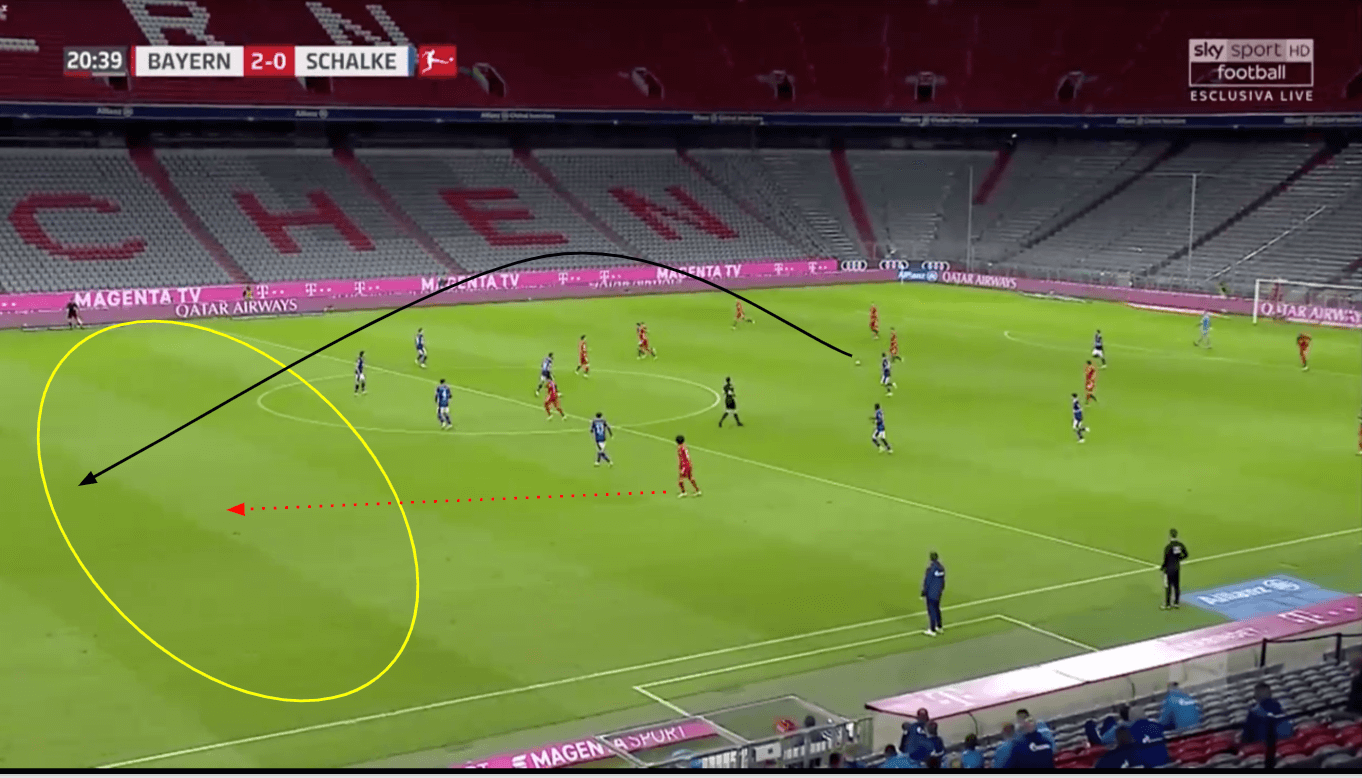 Again off of a quick Bayern restart, Schalke failed to provide any pressure on the man on the ball. This lack of focus against a team like Bayern, who have been looking to play quickly since Hans Flick took over, is a huge error that Wagner should have addressed prior to the match. With Sane even with the back line, Kimmich was free to receive a pass, turn, and deliver another ball in over the top.

While Schalke had been previously going forward and attacking, their inability to organise or have pressure near the ball when they turned it over proved to be costly, even just twenty minutes into the match. These opportunities resulted in them creating 2.93 xG in the first half, leaving Hansi Flick less than happy with his team’s finishing, despite going into halftime up by three goals.

Leroy Sané was Bayern’s largest transfer this summer, coming over from Manchester City. Playing under Pep Guardiola at Man City made him a wonderful target for Hansi Flick’s Bayern, who had done well to implement his own version of positional play at Bayern. Just like at Man City, Sané was used to get in behind the defence with his speed, but his tactical nous proved to be the biggest addition to Bayern’s success. 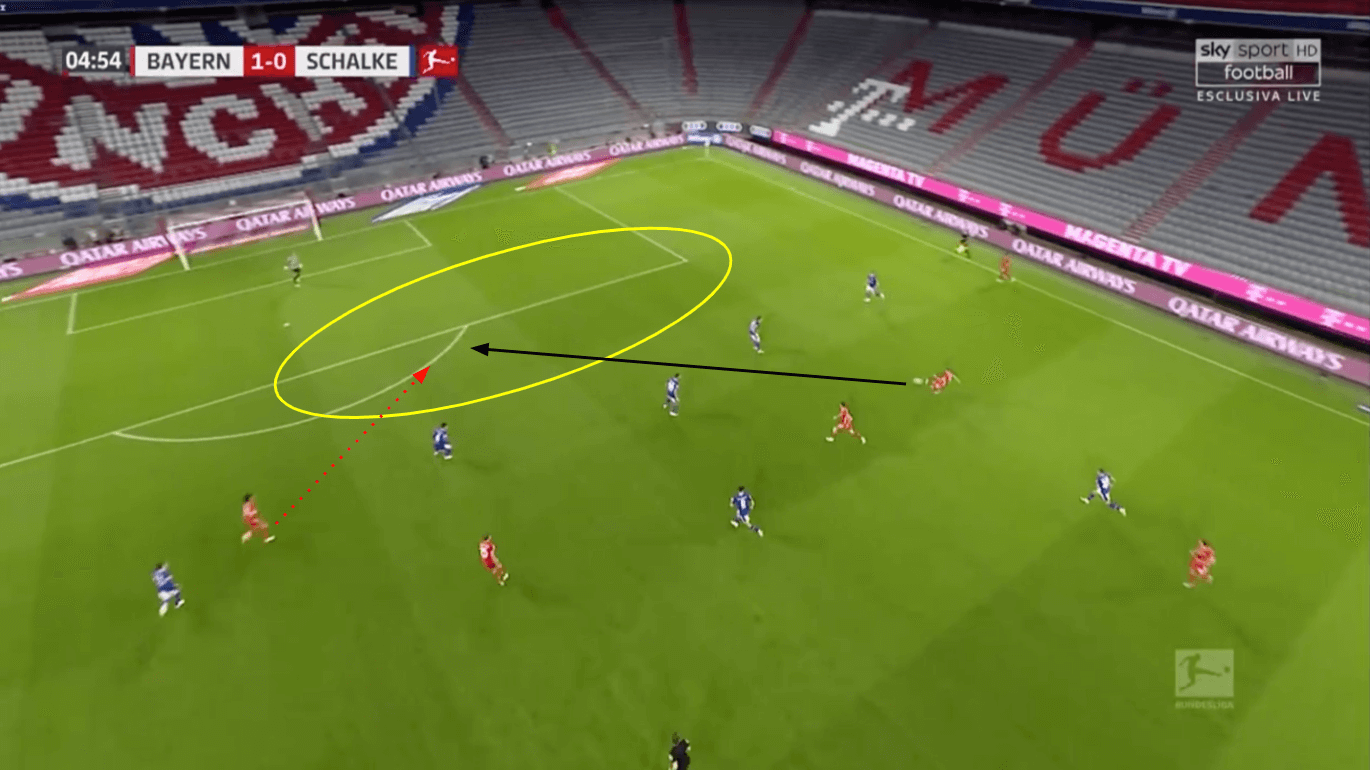 His recognition of space allowed him to find passing lanes and angles to receive the ball. In the image above, Sané had already done well to position himself between the right-back and centre-back. He was also able to recognise the large amount of space in behind Schalke’s back line, and Kimmich delivered a wonderful forward cross that split the centre-backs as it found its way to Sané. This pass had echoes of what Kevin De Bruyne does so well at Man City, and so Sané was more than ready to jump on the end of it. 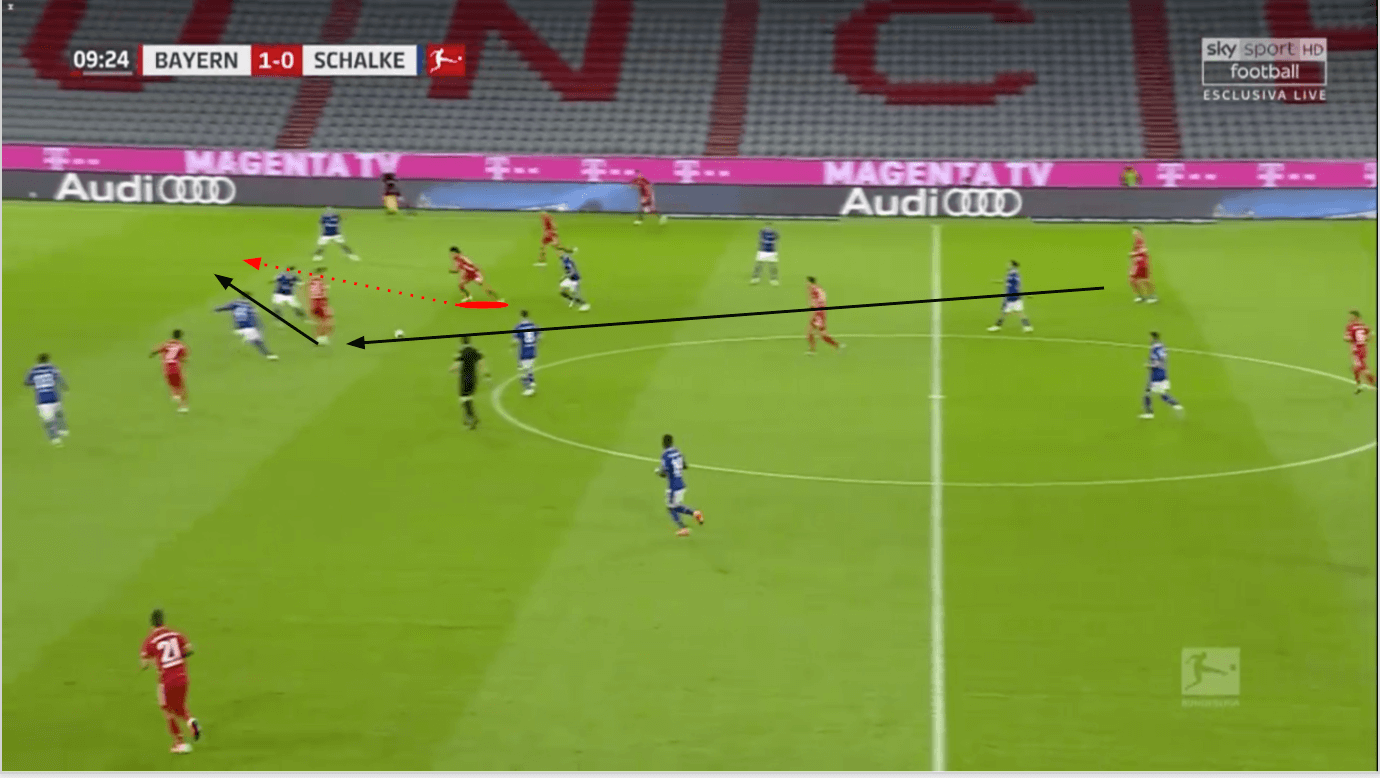 Sané’s ability to work in the half-space also translated well to Bayern’s game plan. In the image above, he did well to find the space in front of the defence and behind the midfielders. The Schalke midfielder actually shifted over to mark Sané, creating a passing lane into Lewandowski, who was checking to the ball. By manipulating his opponent, Sané was able to create room for a teammate to receive. From there, the young German used his speed to make a vertical run and get on the end of Lewandowski’s pass, although his first touch did not set him up for success. 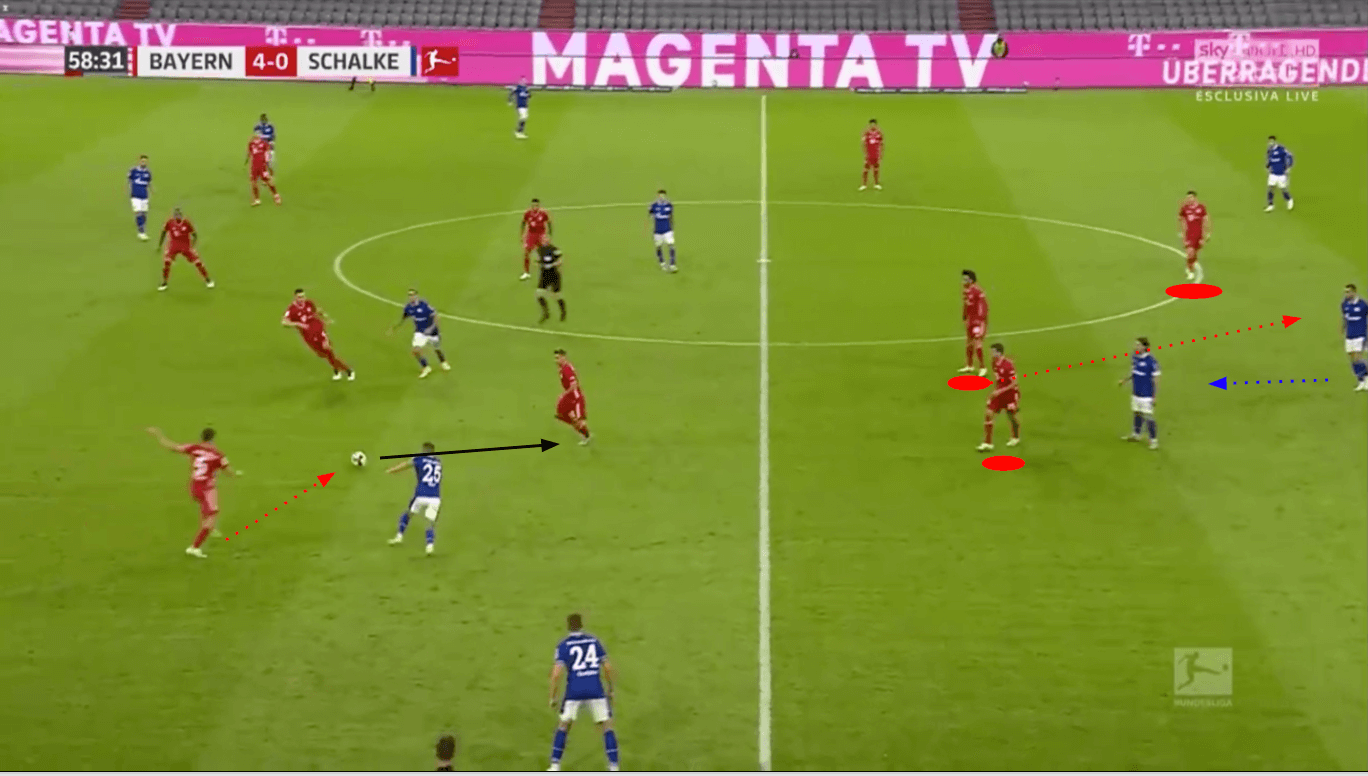 Sané also used his positioning to exploit numerical superiorities on behalf of Bayern. In the image above, Sané, Lewandowski, and Müller were positioned well to be able to draw the attention of three Schalke defenders. Pavard was able to win the loose ball and use his first touch to play Kimmich. As Kimmich received the ball, Sané turned and checked his shoulder, recognising the numerical advantage.

Seeing the defender coming to close him down, Sané made his run up the pitch (in the opposite direction of the defender) as Kimmich released the pass. Sané controlled the ball while holding off another Schalke player and laid it off to Gnabry, who was able to finish the chance to complete his hat trick. What should be most worrying for Bayern’s Bundesliga opponents is that Sané didn’t perform as well as he probably should have, and yet Bayern have clearly got him on the same page as the rest of the squad this early in the season.

Bayern were quite simply too much for Schalke to handle in this match. While supporters and board members may be able to dismiss this as a one-off defeat at the hands of an incredibly well-oiled machine, David Wagner needs to organise his squad and quickly get a result if he hopes to keep his position for the season. Schalke will look to do just that against a club that were nearly relegated last season, Werder Bremen, next Saturday. Bayern’s next match is actually against Sevilla on Thursday in the UEFA Super Cup before they go away to Hoffenheim on Sunday.