Bayern Munich crowned themselves Bundesliga champions again while RB Leipzig finished third in their first season under Julian Nagelsmann. Both teams were threatening in the attack with Bayern scoring 100 goals and Leipzig scoring 81. However, the two sides use different completely striker systems. Whereas Bayern mostly bank on their 4-2-3-1 system with Robert Lewandowski up front, Leipzig often played with a striking duo using different tactical systems such as the 4-2-2-2 or 3-5-2.

In the following tactical analysis, we will discuss the differences between a single striker system and a striking duo system using Bundesliga sides RB Leipzig and Bayern Munich as the main examples. In this analysis, we will only focus on the attacking phase and offensive transition phase though.

Spacing during the attacking phase

Bayern Munich will naturally occupy the opposition centre-back pairing of a back four with their number nine. Bayern’s wingers will then be defended by the full-backs as can be seen below.

An important role plays Bayern’s number ten, Thomas Müller. Playing behind striker Lewandowski he will then attempt to overload opposition full-backs with the winger. Since the centre-backs are occupied by Bayern’s single striker, they are unable to shift over soon enough.

Contrary to that, Leipzig will use a striking duo and position their attackers between full-back and central defender of the opposition back four.

Especially when the ball is in the centre, the opposition is in a dilemma. While the ball near full-back can move out of the back line when the ball is out wide, they will have to keep their position when Leipzig are in possession in central areas to prevent the centre-back pairing from defending man against man.

But Leipzig also like to use an asymmetrical spacing at times. The taller striker will then position centrally to receive possible chipped balls when skipping midfield, while the pacy Timo Werner will position himself in the left half-space where he can start deep runs into the space behind the back line. The right half-space will then be occupied dynamically by an advanced midfielder occasionally attacking gaps within the opposition back line with deep runs as in the following scenario.

Against teams that defend with a back five, the spacing of the attackers within their system can be slightly different. Especially the role of the wingers within a single striker system changes against a five man back line. At Bayern the likes of Serge Gnabry and Kingsley Coman will not play on the outside of the wide defenders anymore, but between the centre-half and wing-back. When playing with high full-backs, they can therewith create a 3v3 up front as the wing-backs will defend Bayern’s right-back and left-back.

Bayern’s spacing within their 4-2-3-1 system is rather focused on playing out wide first, before utilising the opened up space in the more central areas of the pitch.

Their systems also gives the wingers the opportunity to drag out the opposition full-back. As a consequence, there will be free space next to the opposition centre-back pairing. Striker Lewandowski could shift over to attack the free space, but he could still be defended by the two central defenders. Therefore, Hansi Flick’s team will have their full-backs executing overlapping runs to attack this space leaving the opposition centre-backs in a dilemma – whether to stay and allow the full-back to receive or to move out and leave Lewandowski in a 1v1. Exactly this scenario created the situation displayed in the image below.

Lewandowski will sometimes even position himself in ball far areas. This allows him to be on the blind side of the opposition defenders. When Bayern then break through on the wing, he can use a well timed run into the box to receive a cross. His initial blind side positioning then makes it difficult for the opposition to defend his run. Below, one can see how Bayern create a 2v1 against the opposition full-back while Lewandowski is in a ball far position.

Since Bayern striker Lewandowski initially is in a 1v2 situation during Bayern’s attacks, they will try to find their target rather later then earlier during their attacks. Although the Polish attacker is also able to drop into deeper areas and support the build-up play, this ability is barely demanded within Bayern’s current system. Only if Bayern struggle to progress up the pitch, Bayern’s number nine will move into wider areas to receive while playmaker Müller would take over the central position to occupy the opposition central defence.

When the two strikers both start their movements from an initial high position, they will execute diagonal runs into different directions. While one of them will attack the space behind the defence with a deep run, his striking partner will rather provide a short option.

Moreover, Leipzig’s two strikers will often provide one option on the last line while the other attacker drops into the red zone (space between the opposition defence and midfield). This enables for lay-off combinations where the striker on the last line receives the ball and directly lays the ball off to his partner.

With a forward facing player now carrying the ball between the lines, the opposition defence will often need to drop allowing Leipzig to progress further up the pitch. Or, ideally, Leipzig can get behind the defence with through passes.

Last but not least, Leipzig will have more options to play into central areas or the half-spaces up front than Bayern with their single striker system. With two strikers rarely positioned out wide, Leipzig always provide attacking options within the three central channels. The two attackers are more difficult to be defended against than a single number nine because usually only one defender would move out of position to attack the pass while the other one needs to cover. Leipzig’s two options therewith often enable them to play into their attackers immediately while Bayern will rather look for their wingers in wider areas of the pitch.

All in all, the spacing and therewith the occupation of opposition defenders is different whether attacking with a single striker or a striking duo. Both systems have their advantages and disadvantages in terms of tactics and the opposition formation also has an impact on the spaces that pose attacking opportunities.

And while there are obvious differences whether attacking with two strikers or a single striker, some principles will remain the same. The strikers will, for instance, always look to position between opposition defenders to attack gaps with through passes or drag defenders out of position independent of the tactical system utilised. The different systems come along with different requirements for certain positions though. While Bayern’s 4-2-3-1 system also heavily relies on a strong striker in former Borussia Dortmund player Lewandowski and pacy as well as skilful wingers, Leipzig’s two striker system is less dependent on wingers attacking the flanks.

To sum up, there simply is not a superior system. However, every system needs to fit to the available personnel. 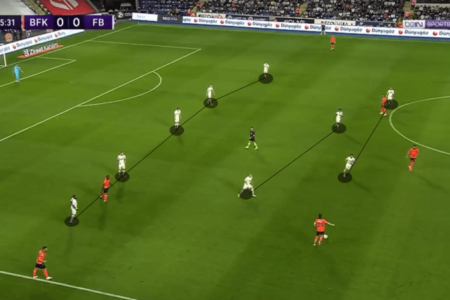 President Duílio Monteiro Alves significantly improved Corinthians’ situation throughout 2021. From undoing all of the terrible actions of the past […]