Following Bayern Munich wrapping up seemingly another title yesterday, at the expense of Borussia Dortmund and the chasing pack, we are once again back at the start of another Bundesliga season.

Stuttgart and Freiburg met in gameweek one in the Bundesliga, and only one week in and we’re already unable to avoid the footballer cliches. It was truly a game of two halves as Freiburg dominated the first half, going into the break 2-0 up against the home side. They scored a third immediately after the second half started, yet Stuttgart found their footing in the game, and played an exceptional second half – they arguably were unfortunate not to take any points from this game. This tactical analysis will give an analysis of the tactics used by both sides as Christian Streich’s Freiburg took all three points against Pellegrino Matarazzo’s Bundesliga new boys, Stuttgart.

Towards the end of the season Stuttgart started using a back three more often, and whilst the image below suggests a conventional 3-4-3, it was in reality more of a 3-4-2-1. New signing Walder Anton started in the back three alongside Michał Tomasz Kamiński and Marc-Oliver Kempf. The midfield two was made up of Orel Mangala and Wataru Endo, whilst Roberto Massimo and Silas Wamangituka played in the wing-back positions. Daniel Didavi, Gonzalo Castro, and 20-year-old Mateo Klimowicz started in their front three.

Freiburg had two big personnel losses this summer with centre-back Robin Koch departing for Leeds United and goalkeeper Alexander Schwolow joining Hertha BSC. With long-time servant Dominique Heintz and former “wunderkind” Philipp Lienhart, who is now rebuilding his reputation at Freiburg, both playing together at centre-back, Koch’s departure hasn’t left any gaping holes in their defence. Mark Flekken was potentially expecting to be given the first-team jersey following Schwolow’s departure, and would have been disappointed to have seen Florian Müller join the club on loan from Mainz. Müller was given the starting berth and the ever-consistent Jonathan Schmid and Christian Günter played either side of Heintz and Lienhart, in the full-back positions.

Nicolas Höfler played in defensive midfield, whilst an attacking midfield trio of Vincenzo Grifo, Roland Sallai, and Woo-Yeong Jeong played in front of him.

Lucas Höler and the experienced Nils Petersen played together in the forward line. 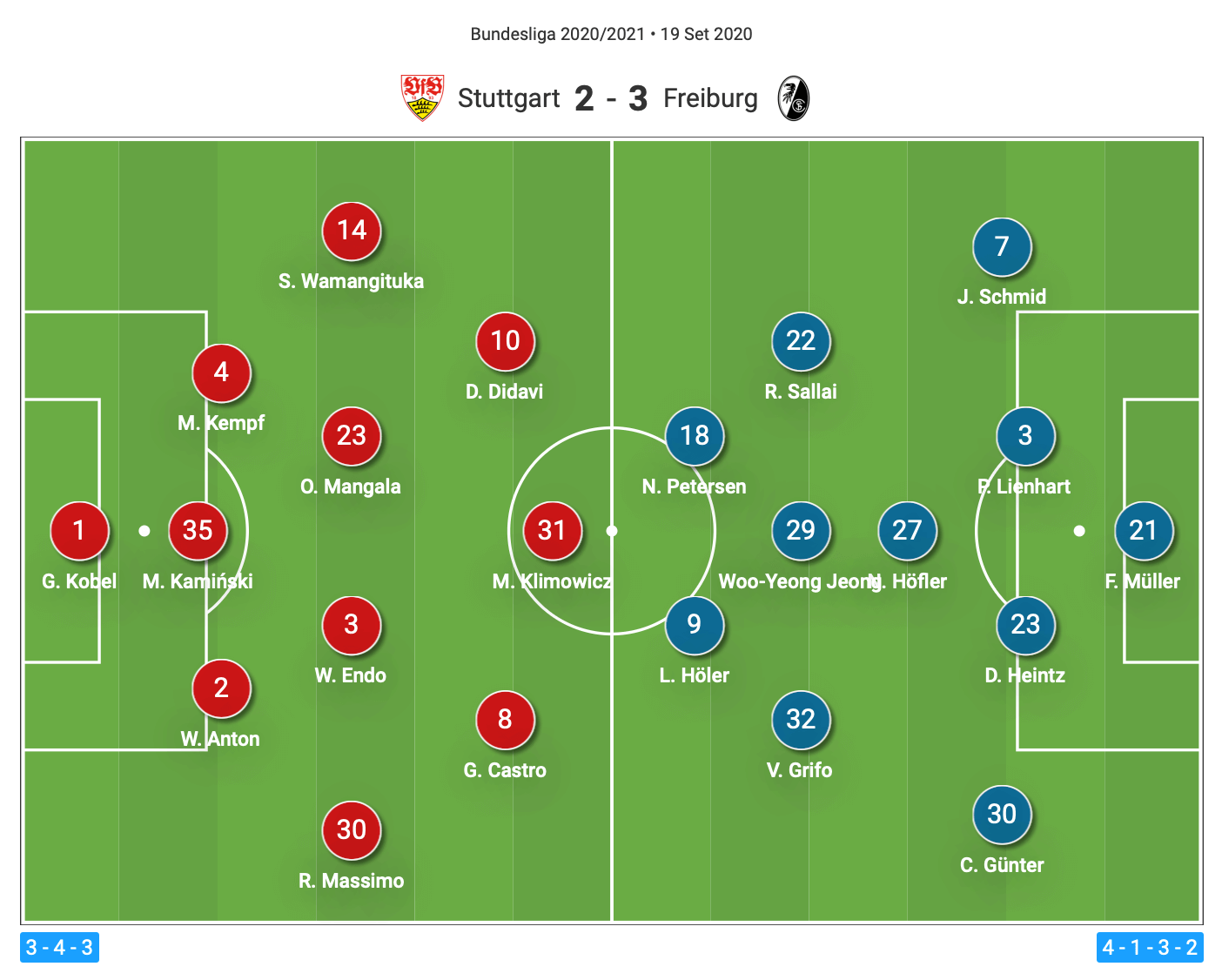 How Freiburg’s defensive shape frustrated Stuttgart in the first half

Freiburg were happy to give up possession and attempt to force errors out of a Stuttgart side that were all too happy to have more of the ball, taking 65% of possession on the day.

As such, Freiburg looked to press high and force these errors, employing a simple pressing structure to force Stuttgart onto the flanks, whereby they could cut out their options and regain possession in an attacking area.

We can see this basic structure in the image below as Freiburg successfully prevented central passage for the hosts, with the front two also ensuring the ball was worked laterally by Stuttgart, and their positioning not only prevented them playing back inside, but also left them in an attacking area should their midfield have regained possession in the press.

In the second line of the press, they had a tight midfield three with Grifo (out of shot), joining both Woo Yeong-Jeong and Sallai in shifting across and aggressively pressing as Stuttgart worked the ball into the flanks. 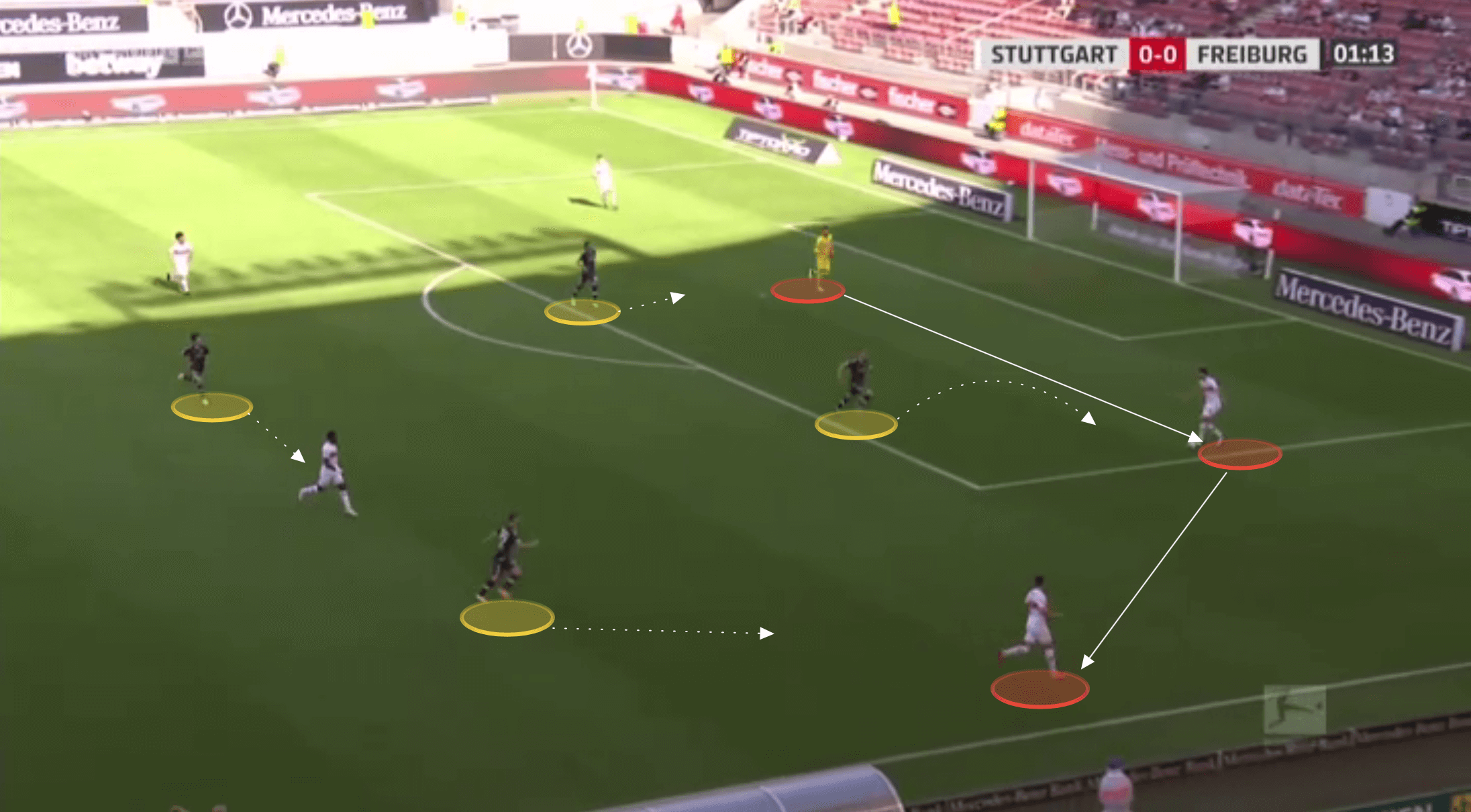 Freiburg had good success with forcing errors from this pressing structure, but it wasn’t the main cause of frustration. Stuttgart had good possession in the first half and still managed to get eight shots away in the first half, which is more than Freiburg managed in the whole game. However, the away side forged much better chances from their six shots, with an xG of 2.25, all of which hit the target. Stuttgart had a superior xG of 2.76, yet hit the target just seven times from 19 shots.

Once Stuttgart had advanced the ball into the Freiburg half, the away side entered into a disciplined mid-to-low block, which proved difficult to break down.

Generally, it would look like the image below where Sallai or Woo Yeong-Jeong would tuck in next to Höfler, whilst the other would press in the second line along with Höler, as Petersen remained as the lone forward. Throughout the game, Höler would drop in as Freiburg looked to protect the central space and force Stuttgart down the wings. Their shape was impenetrable, and over the course of the game, they made an astonishing 58 interceptions and 38 clearances. 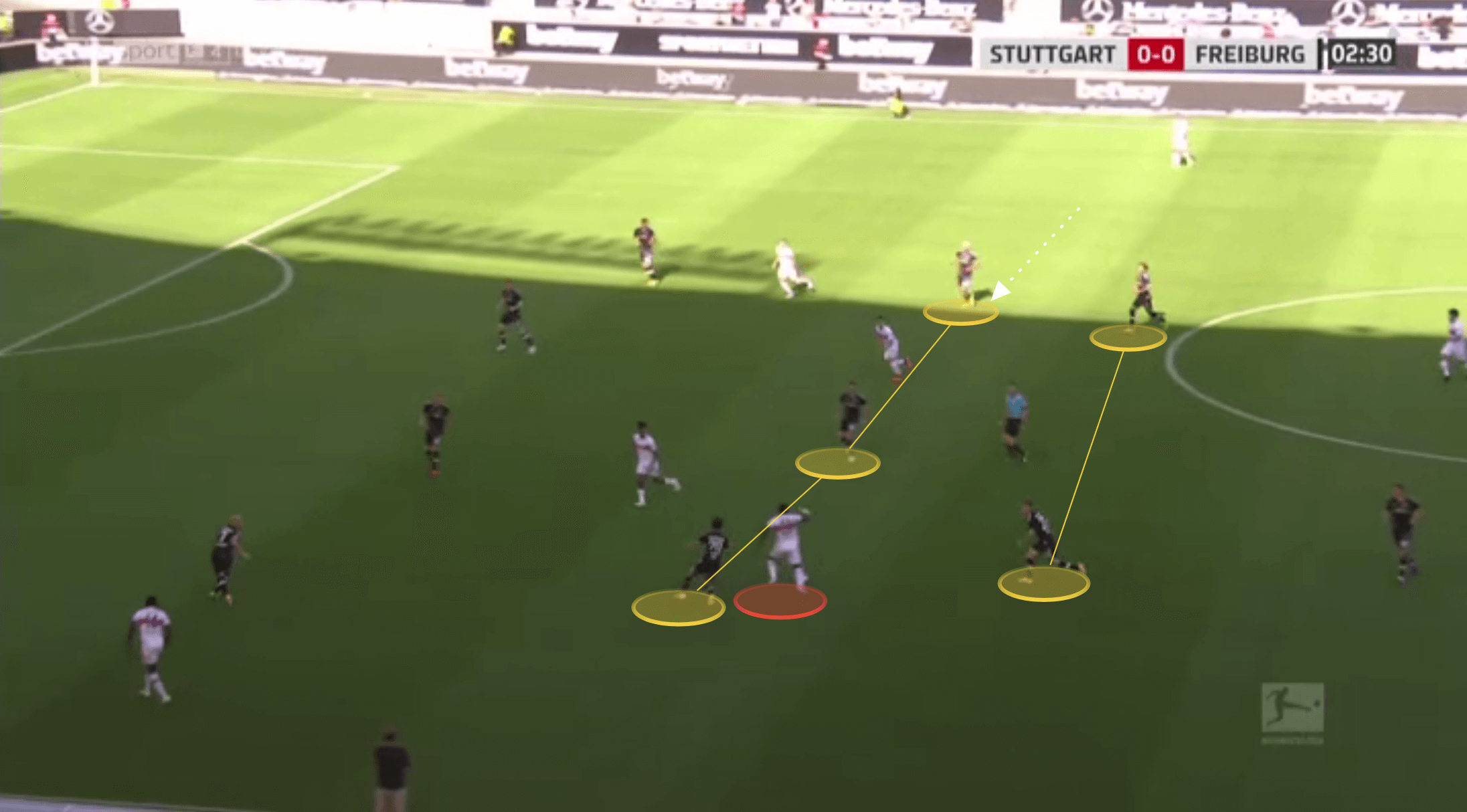 They were successful in doing this, and whilst Stuttgart managed a lot of accurate crosses, they weren’t able to regularly trouble the Freiburg goal with these. 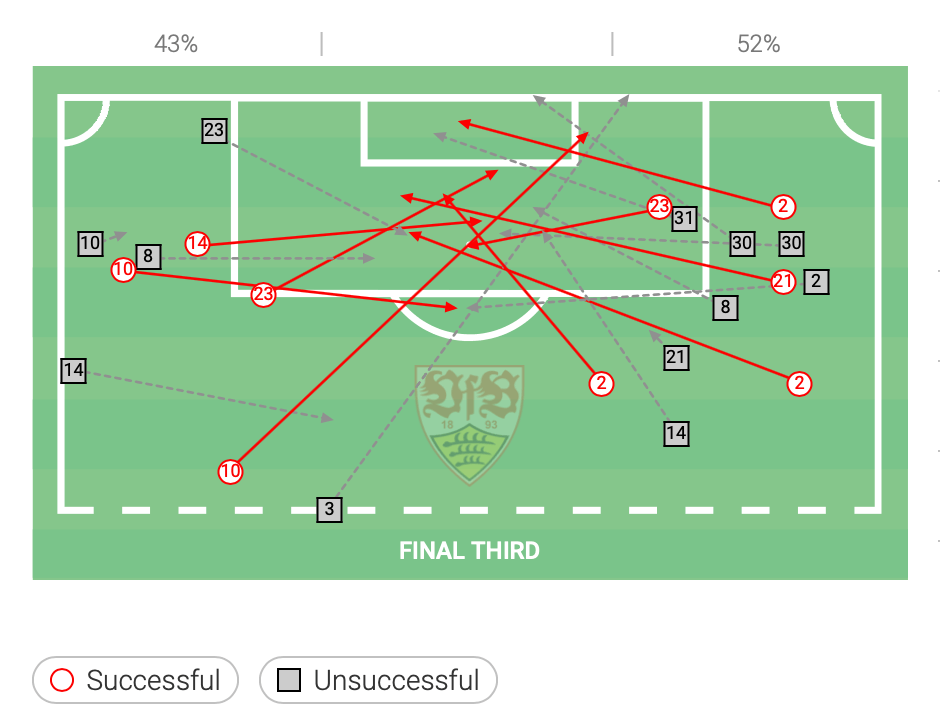 Freiburg would only use this shape if they were able to keep their defensive and midfield lines vertically compact. If they weren’t able to, Höfler would drop into the gap between the two lines, whilst Höler would drop from his centre-forward position into midfield, as highlighted below. Due to the width provided by Stuttgart’s wide players in their 3-4-3, Grifo in particular was flexible and would drop back to support Günter in the defensive phase to avoid the left-back being overloaded. 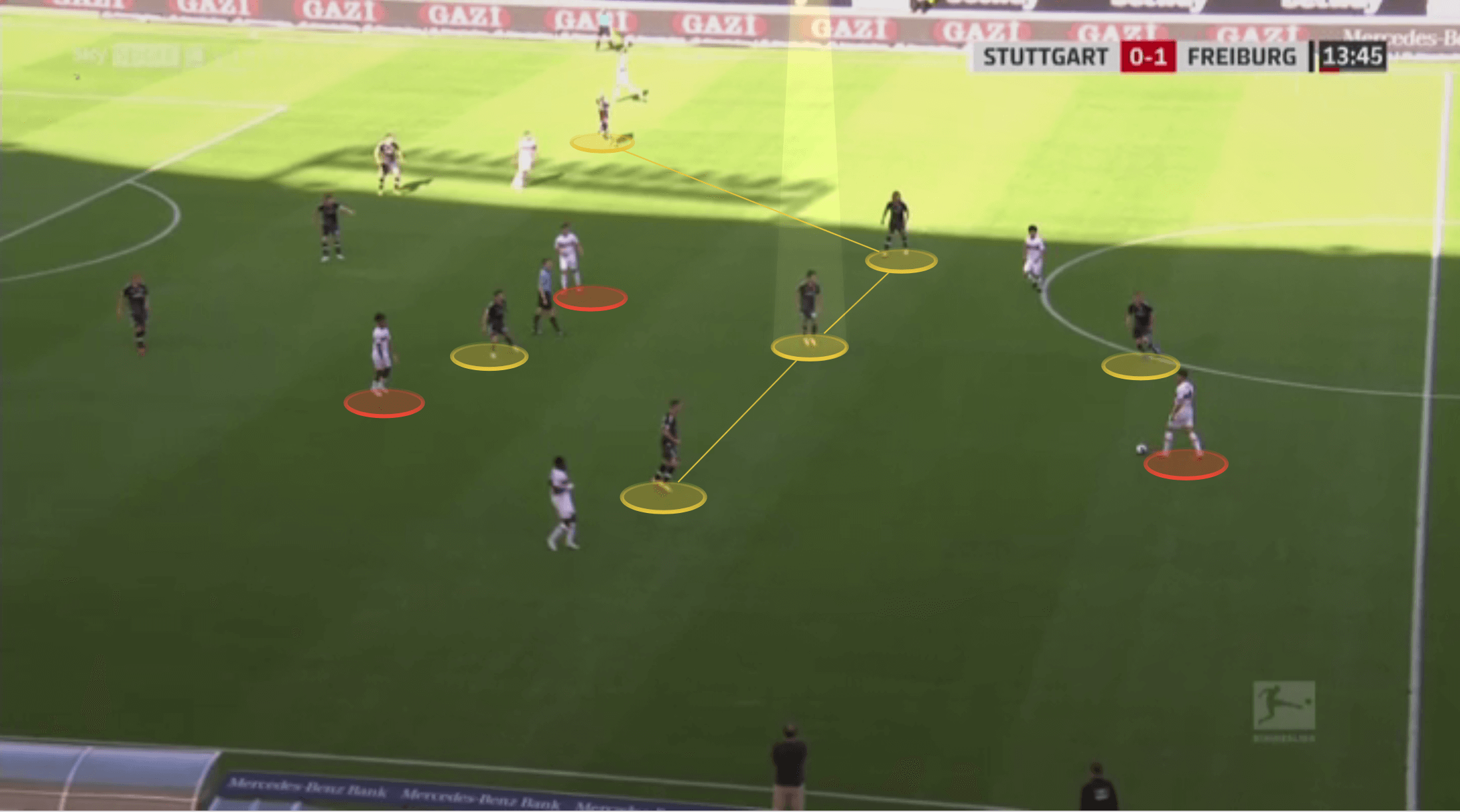 Stuttgart wanted to hit the half-spaces and draw their opponents into awkward areas, but this proved difficult in the first half. Freiburg were able to remain compact in central areas and push the home team down the flanks. Yet Stuttgart didn’t help themselves either, with a distinct lack of presence centrally in the forward line during the first half, as is evident in the image below. 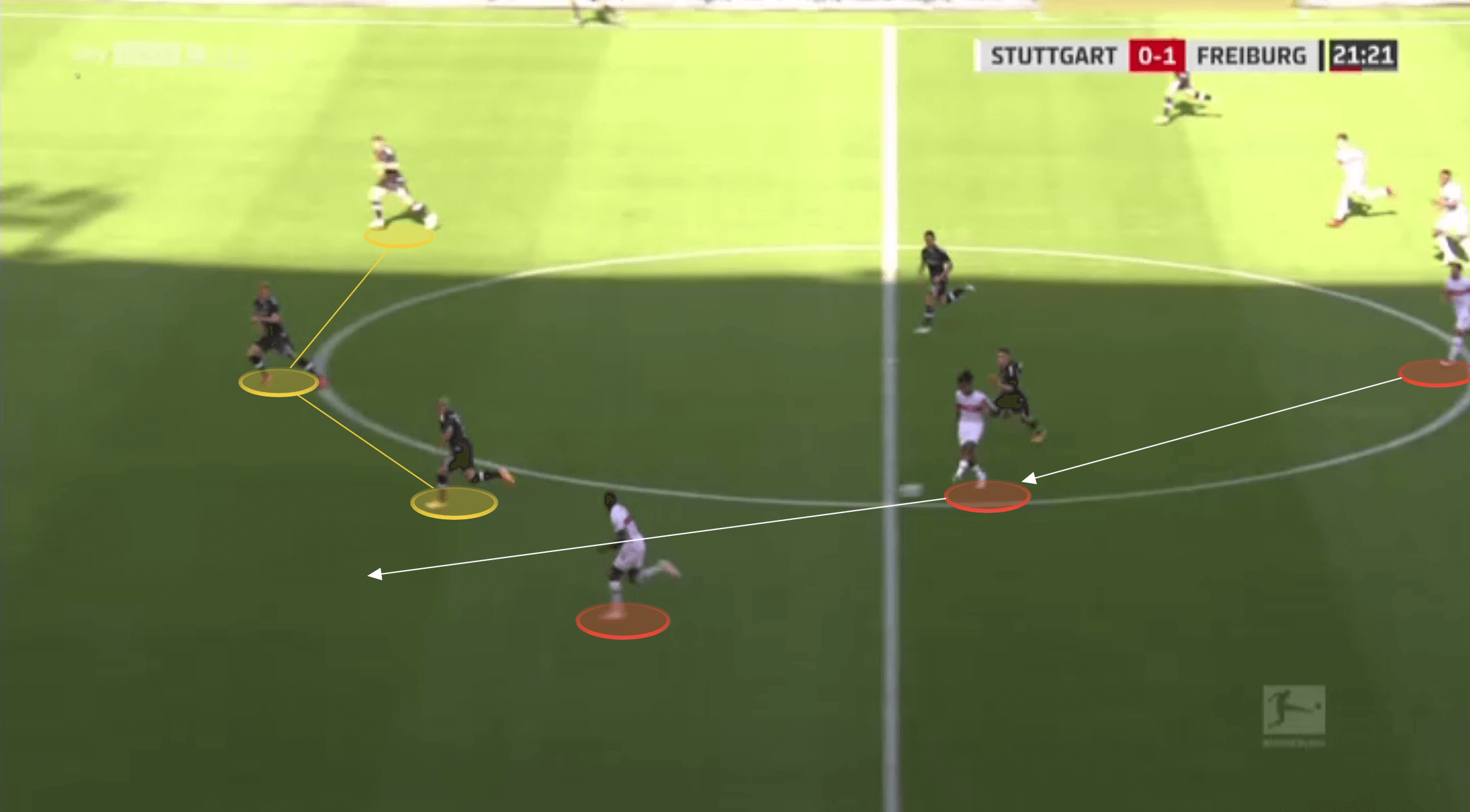 Stuttgart’s build-up often involved Endo (3) dropping deeper than Mangala, and the central-midfielder would find himself alongside his defence at times. This allowed both of the wide centre-backs the ability to push a little wider and a little further forward, but most noticeably it opened up plenty of space in the centre of the pitch. 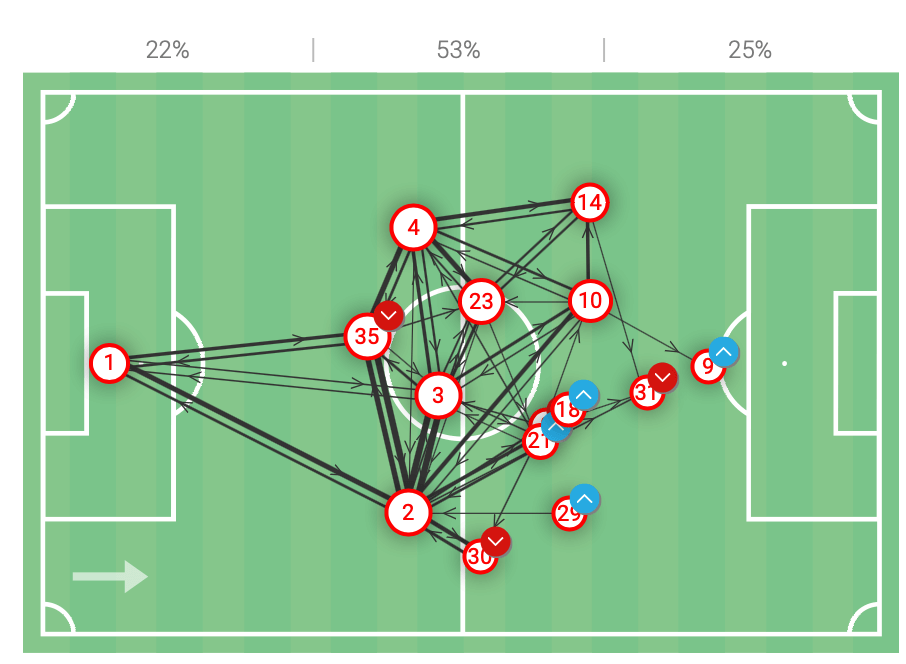 In the second half, Stuttgart were able to access this space more often, and it was no coincidence that this coincided with Endo doing this more consistently. On top of this Sasa Kalajdzic came on as a centre-forward and gave more of a presence leading the line for the last thirty minutes, where Stuttgart began to dominate. Divadi had a relatively quiet first half, but was instrumental in breaking down the Freiburg defence in the second period.

Despite lining up on the left side of the front three, he would drop inside into the half-spaces or right into the centre of the pitch and looked to get on the ball in between Freiburg’s defensive and midfield lines. To ensure he wasn’t followed by Schmid, Wamangituka would push into an attacking left wing position to pin back the Freiburg right-back, which we can see in the image below as Divadi is on the ball, but more noticeably we can observe this in the pass map shown at the beginning of this section. 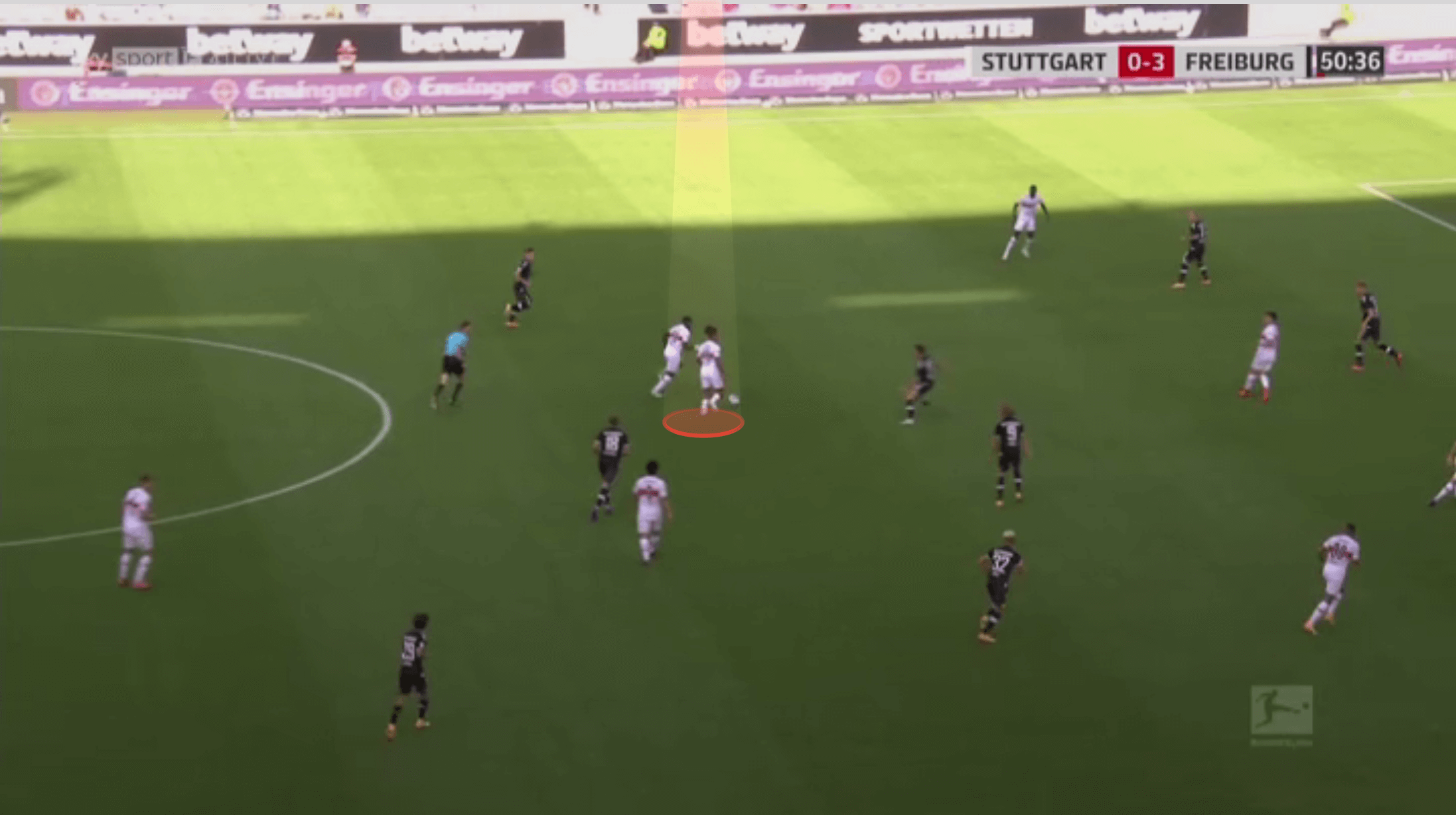 As Stuttgart began to access the half-spaces more often in the second half, they began to break down Freiburg’s defensive shape and were able to play direct, vertical through passes for their attackers to run onto. 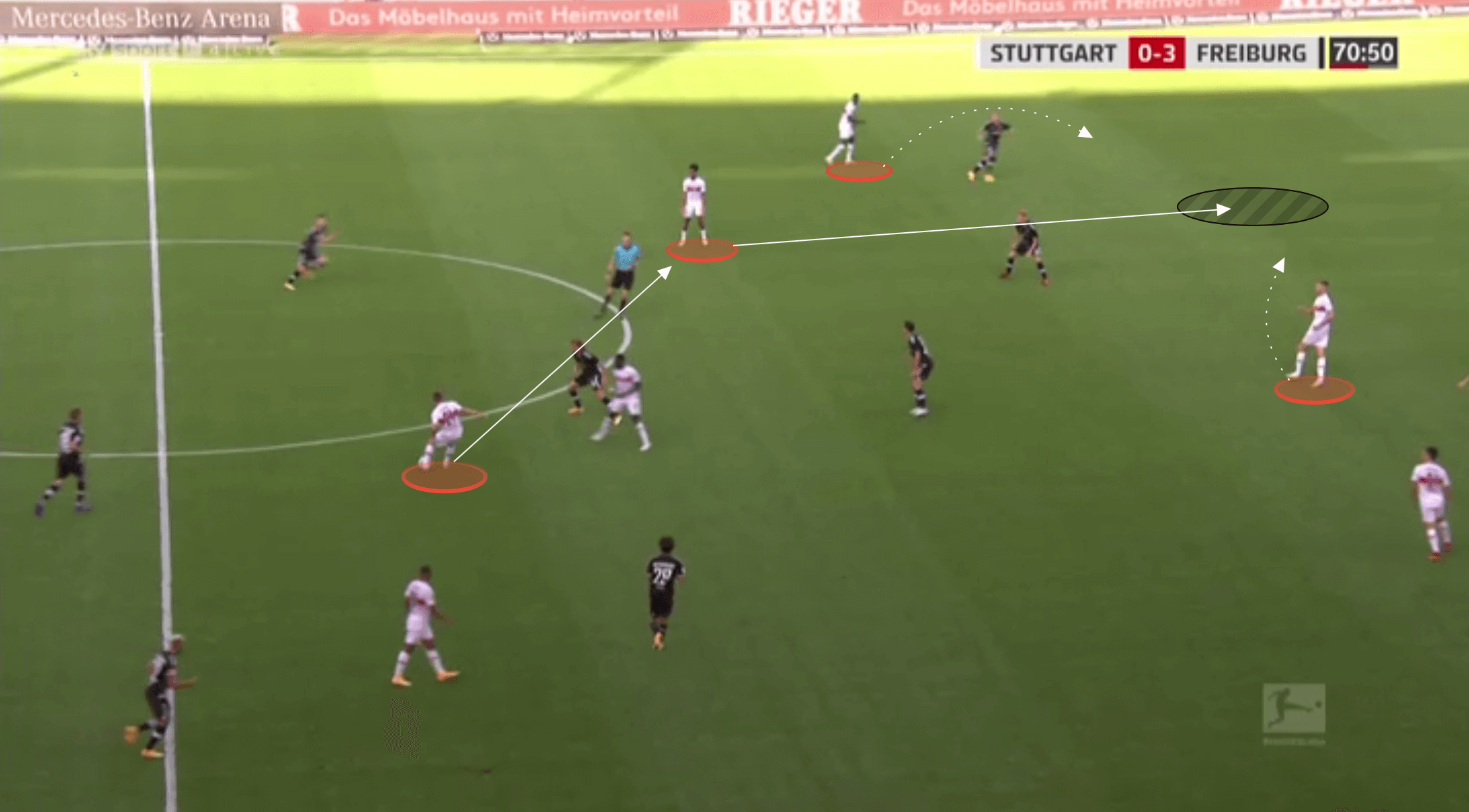 As Freiburg began to become more stretched, their defence were forced to come out of their compact shape and fill the area between their midfield and defence. Again though, this left space behind their defence, and once again direct, vertical through passes were a simple, yet very effective way to break them down. 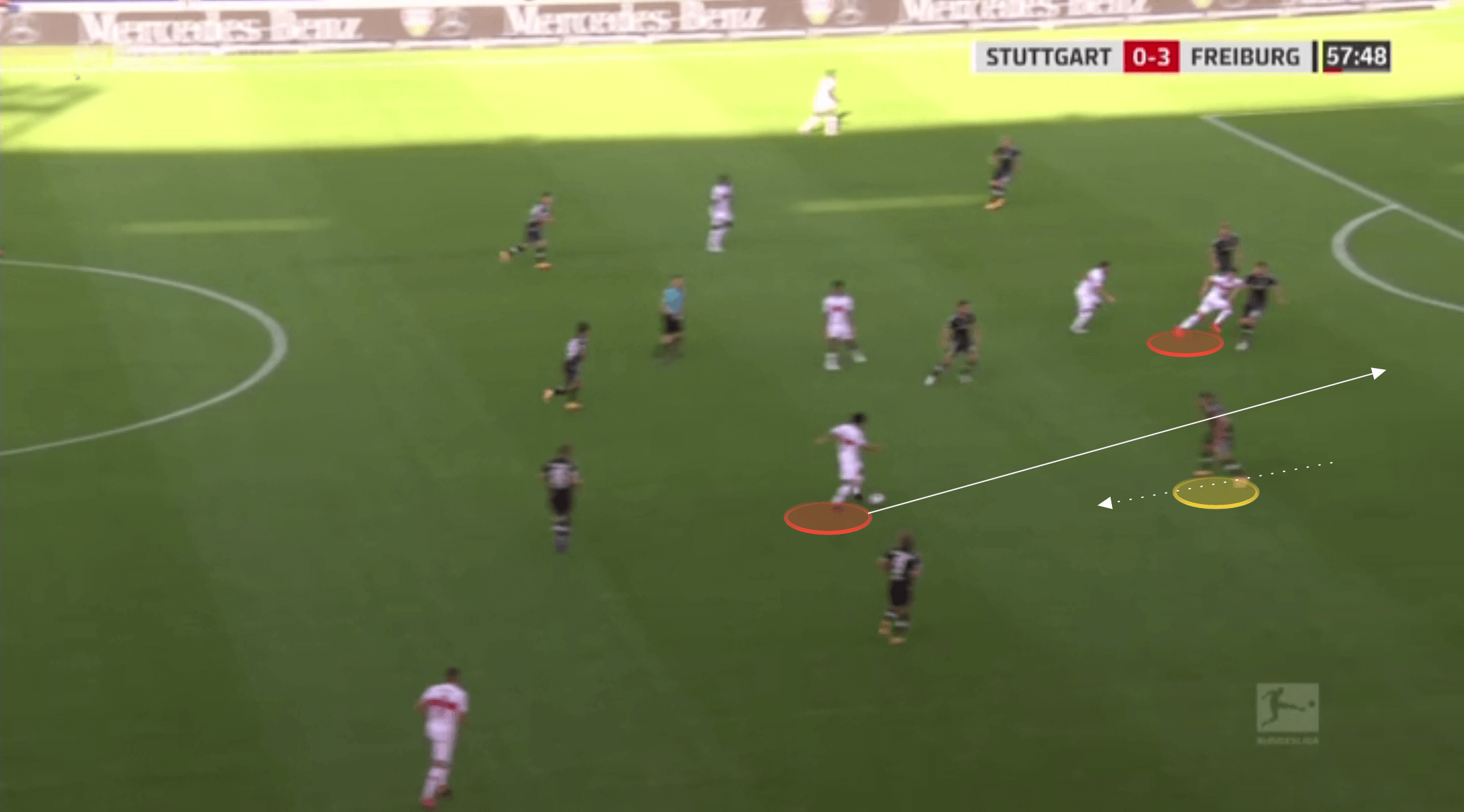 Earlier we looked at Freiburg’s press, and Stuttgart’s dominance and ability to stretch Freiburg, came as the away team’s press began to significantly drop in intensity as we can see below. It was the first game of the season and there may be some early season fitness issues for Streich’s side, but it was interesting to see how compact they were in the first half, yet in the second half, they didn’t press particularly well, and there was far too much space between their lines, giving Freiburg the appearance of a totally different side. Perhaps at 3-0 they took their foot off the gas, but this was where Stuttgart applied the pressure, and they were unfortunate to only score twice. 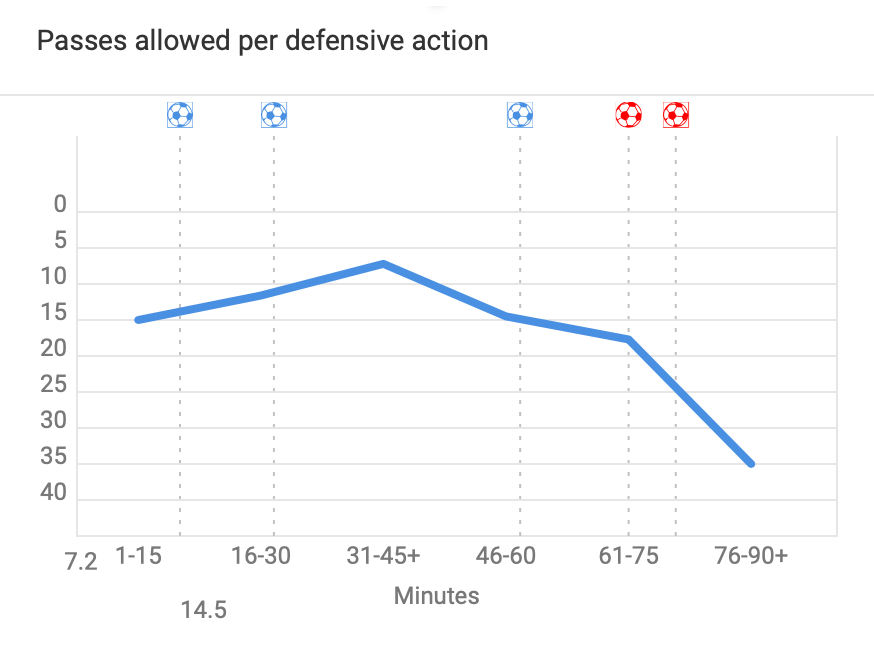 Freiburg didn’t have to do anything groundbreaking to beat Stuttgart’s defence. They rightly foresaw the potential for errors and they took their chances when they were presented with them.

This began in the eighth minute where Petersen was easily able to find space between two of Stuttgart’s centre-backs to head home a cross after Stuttgart allowed the away team to progress the ball all too easily on the right flank. 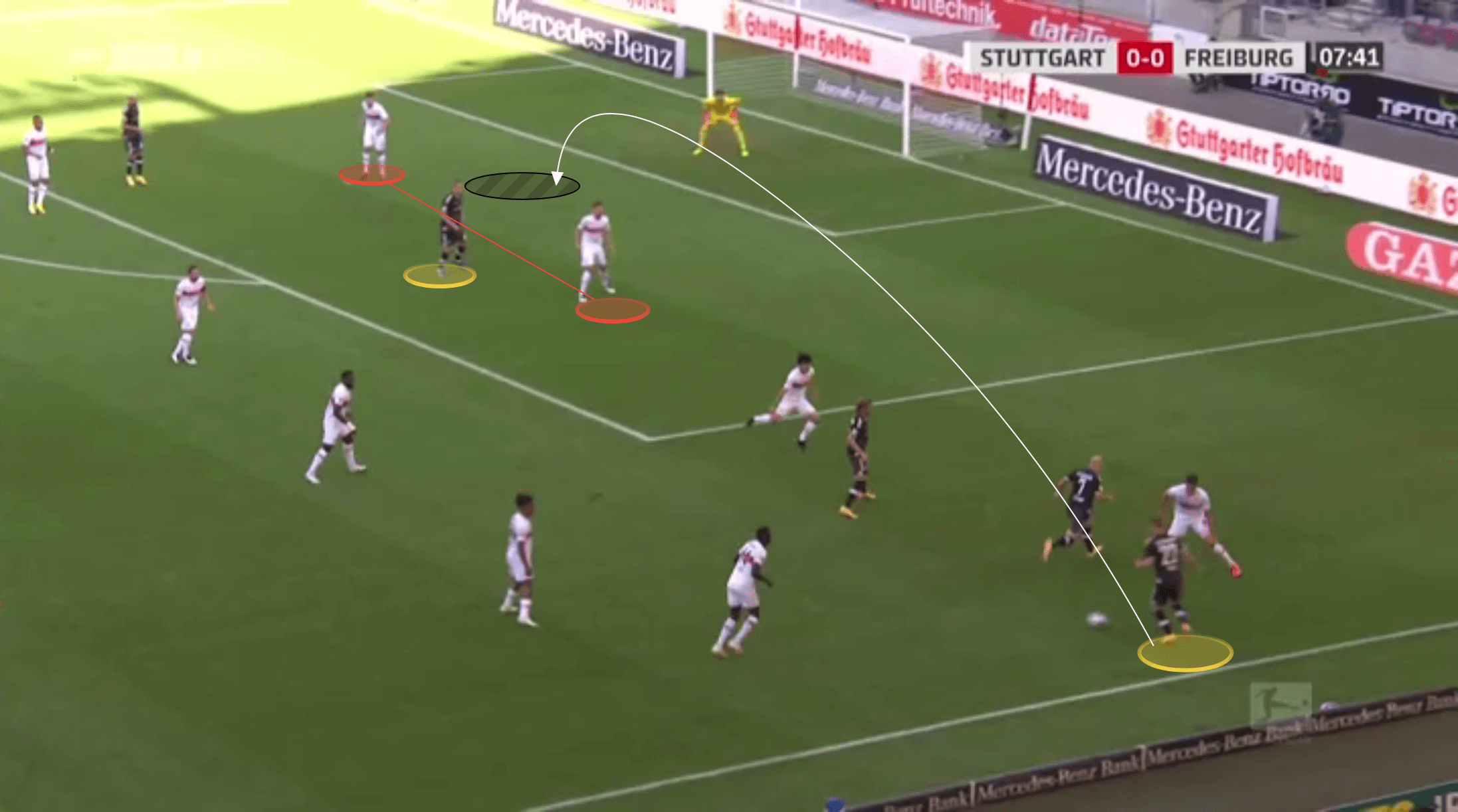 Otherwise, Freiburg looked to hit long passes forward for Petersen to challenge for and ensure their attacking players were the first to latch onto the knockdowns, regardless of whether Petersen won the headers. In fact, 18% of Freiburg’s passes on the day were long passes, compared to Stuttgart, whose long pass share of their total passes was just 4%.

They would play out short from the goalkeeper, engaging the Stuttgart press ever so slightly, and ensuring they created as much space as they could in such a short space of time between Stuttgart’s midfield and defensive lines. 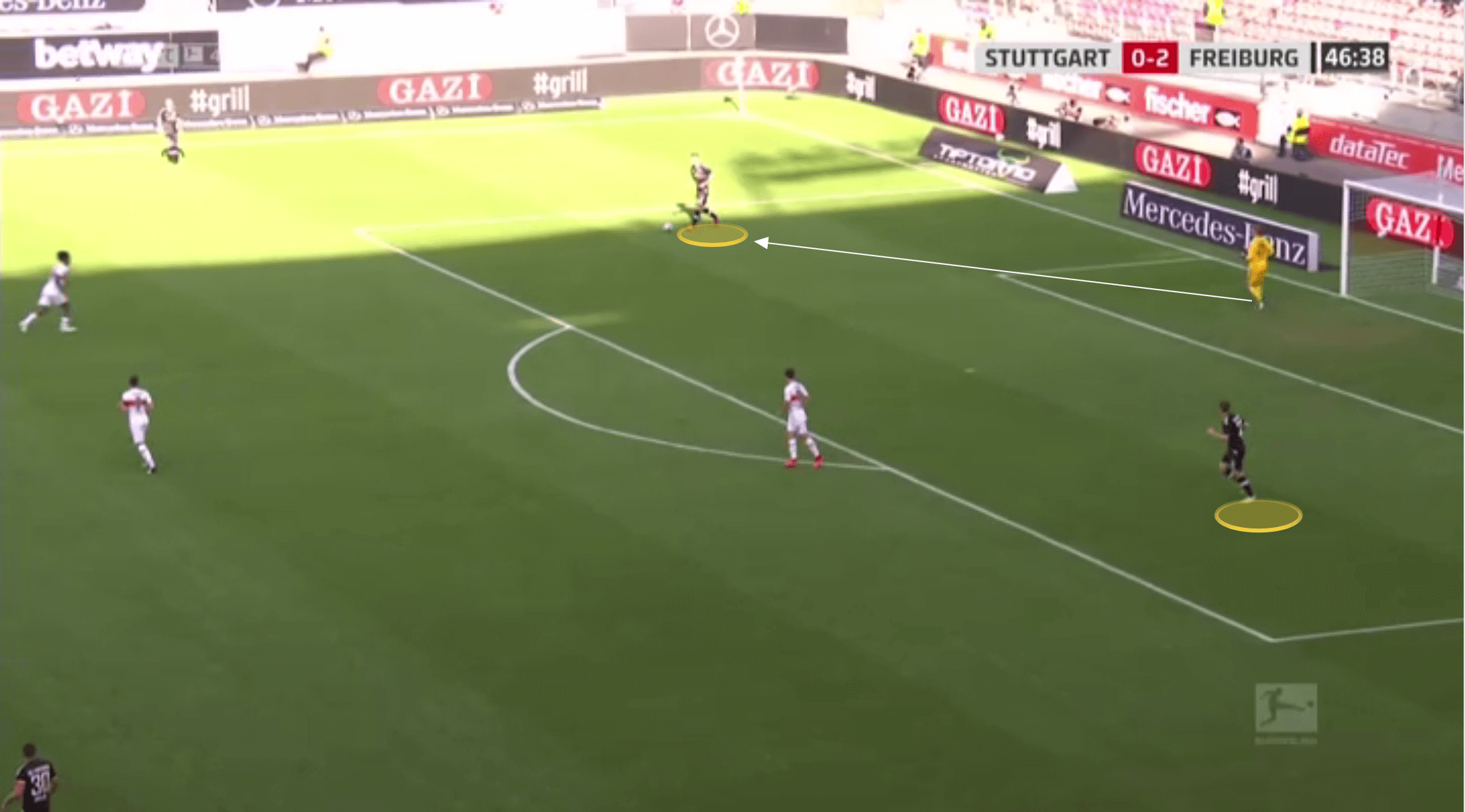 As they hit these long passes forward, their attacking players would look to fill the space between Stuttgart’s midfield and defence and get to the knockdowns first. From these areas, they would look to orchestrate quick, direct attacks based around third-man runs being made behind Stuttgart’s defence. 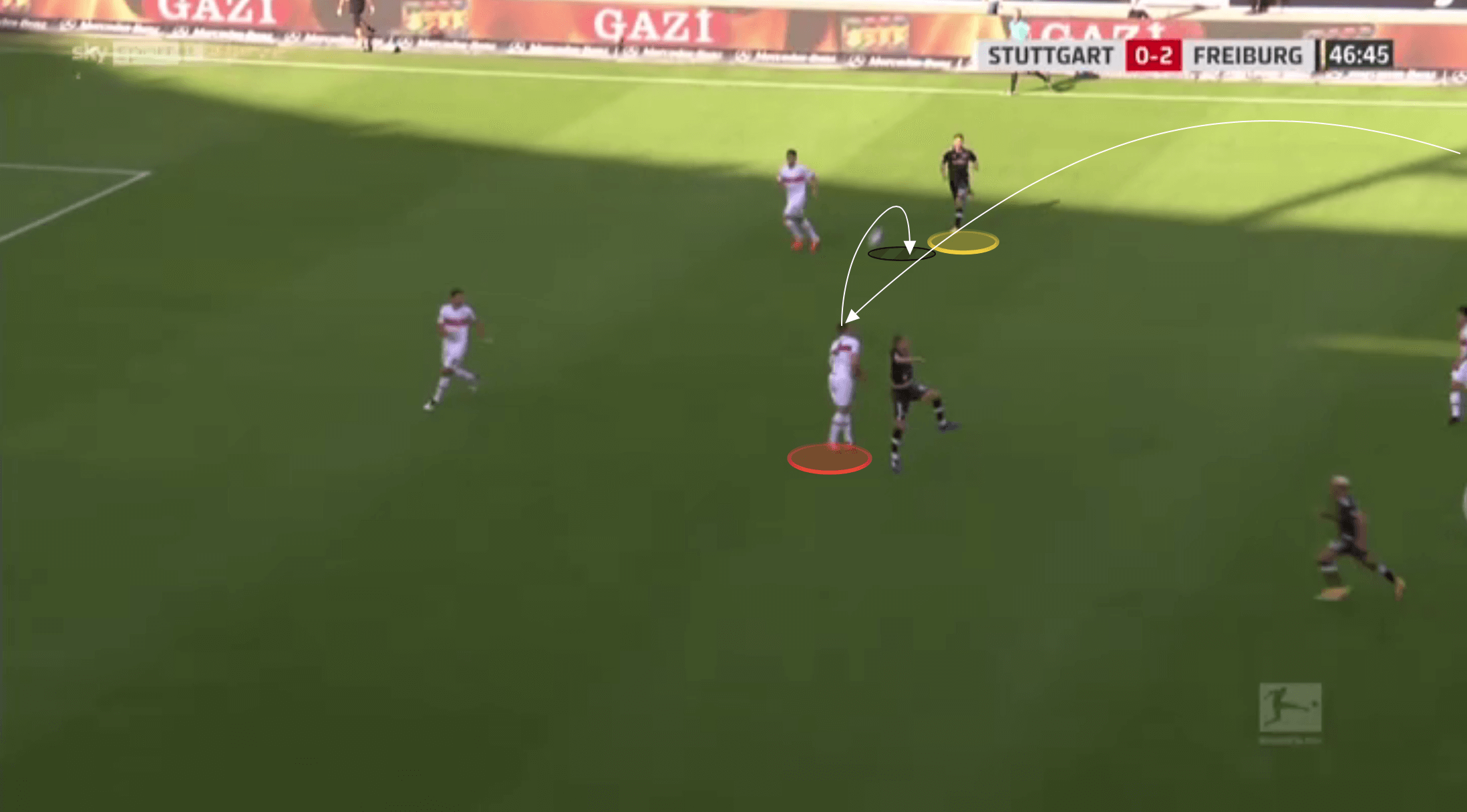 They did this throughout the game, and only Petersen would play on the final man, with Höler dropping deeper to make his late runs forward past his strike partner.

We can see an example of this below as Freiburg have possession on their right flank. Woo-Yeong Jeong makes the first run from midfield to receive behind the Stuttgart defence, whilst Höler makes another run, a little later, into a more central position. 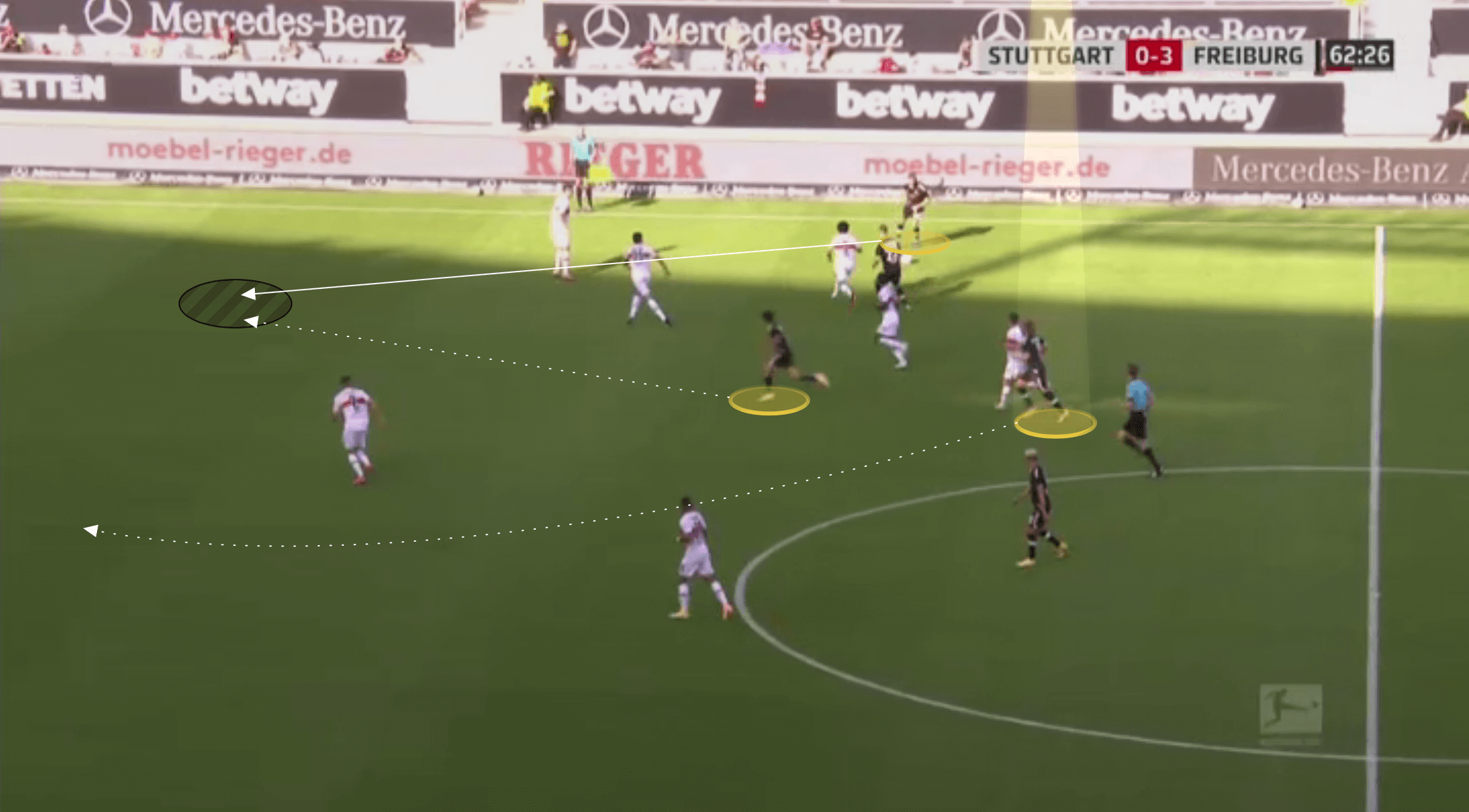 Woo-Yeong Jeong is able to engage Kamiński leaving enough central space for Höler to time his run to receive the ball inside. 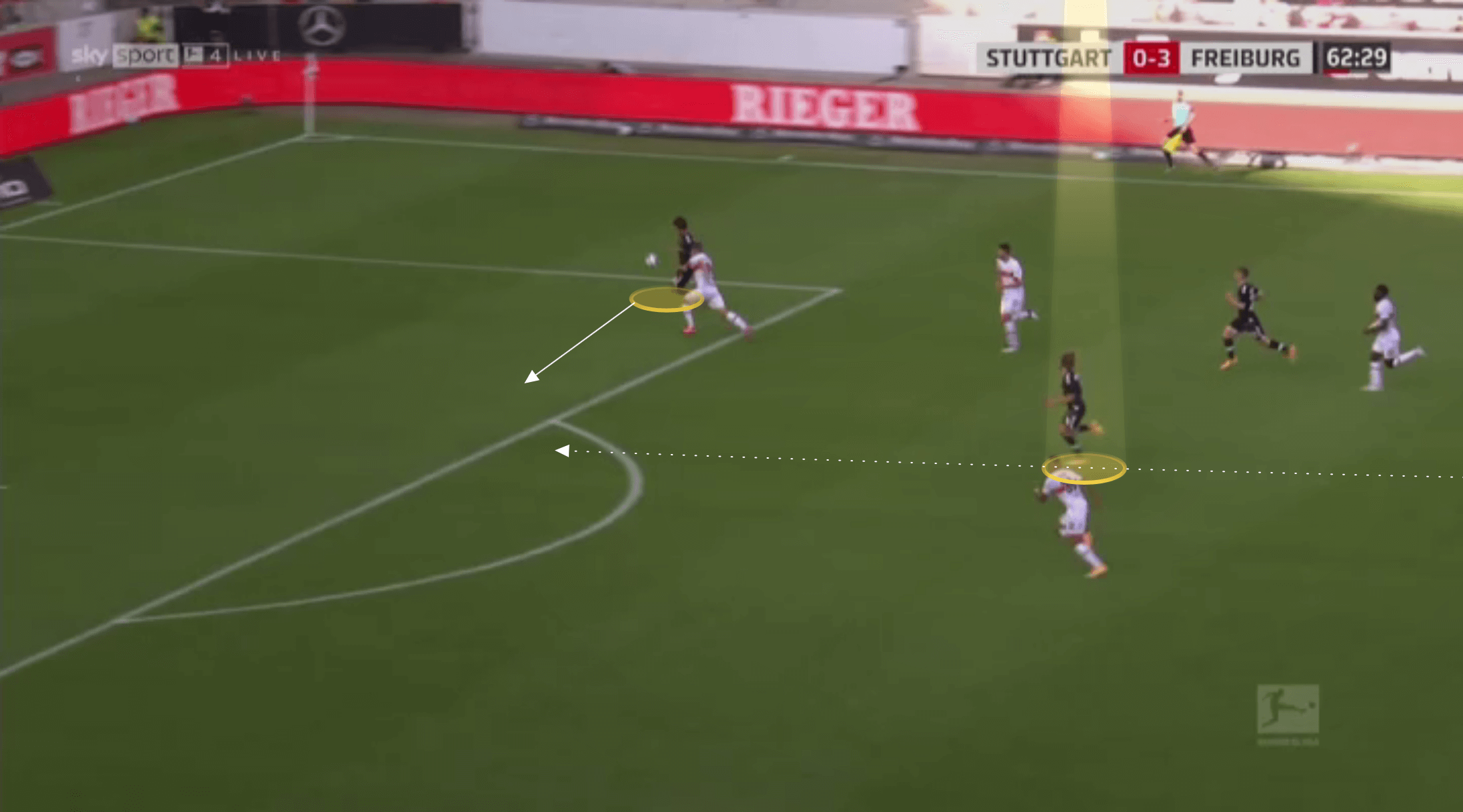 Despite a disappointing result for Stuttgart, they will be encouraged with how they came back from a three-goal deficit, but also how in the second half they were able to show that their principles of play from the 2. Bundesliga last season translates perfectly well to the Bundesliga with an almost identical core of players.

Freiburg were unsurprisingly difficult to break down, just as they so often are, but what will be pleasing for Streich is how clinical they were and how much better the chances they created were, despite creating far fewer chances than the home side, with their shots coming on average eight metres closer to goal than Stuttgart’s. Despite a couple of losses of key personnel, Freiburg have continued where they left off without missing a beat.