Game week two of the English Premier League saw a London derby, with Arsenal hosting West Ham. The Gunners looked back in form on the opening day of the season and were hoping to seal the three points over a West Ham side that lost on the opening day. Arsenal will also travel to Liverpool the following week and Mikel Arteta was hoping to head into that fixture with a winning momentum and in this tactical analysis, we will look at the tactics of both Arsenal and West Ham from their fixture. We shall start the analysis by looking at the lineups. 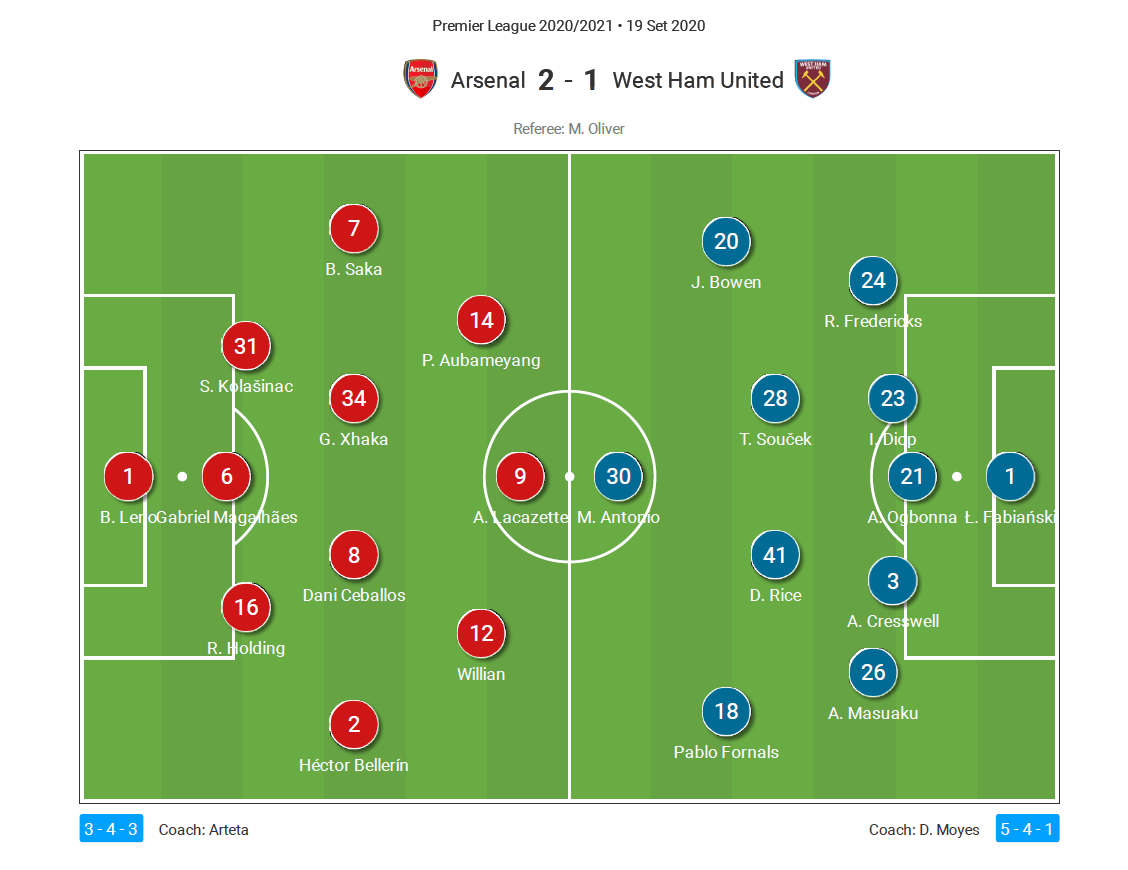 Arteta made three changes to the side that beat Fulham the previous week, with Sead Kolašinac, Bukayo Saka and Dani Ceballos coming in for Kieran Tierney, Ainsley Maitland-Niles and Mohamed Elneny. Tierney had picked up an injury in the warm-up and hence had to be replaced by Kolašinac. Arsenal set out with their usual 3-4-3 formation though it was more of a 5-2-3 in play.

David Moyes made just one change to the side that lost to Newcastle, with Arthur Masuaku coming in place of captain Mark Noble. Declan Rice led the side in spite of speculation about him leaving and the Hammers shifted from their 4-5-1 formation the previous week to a 5-4-1 style this week. 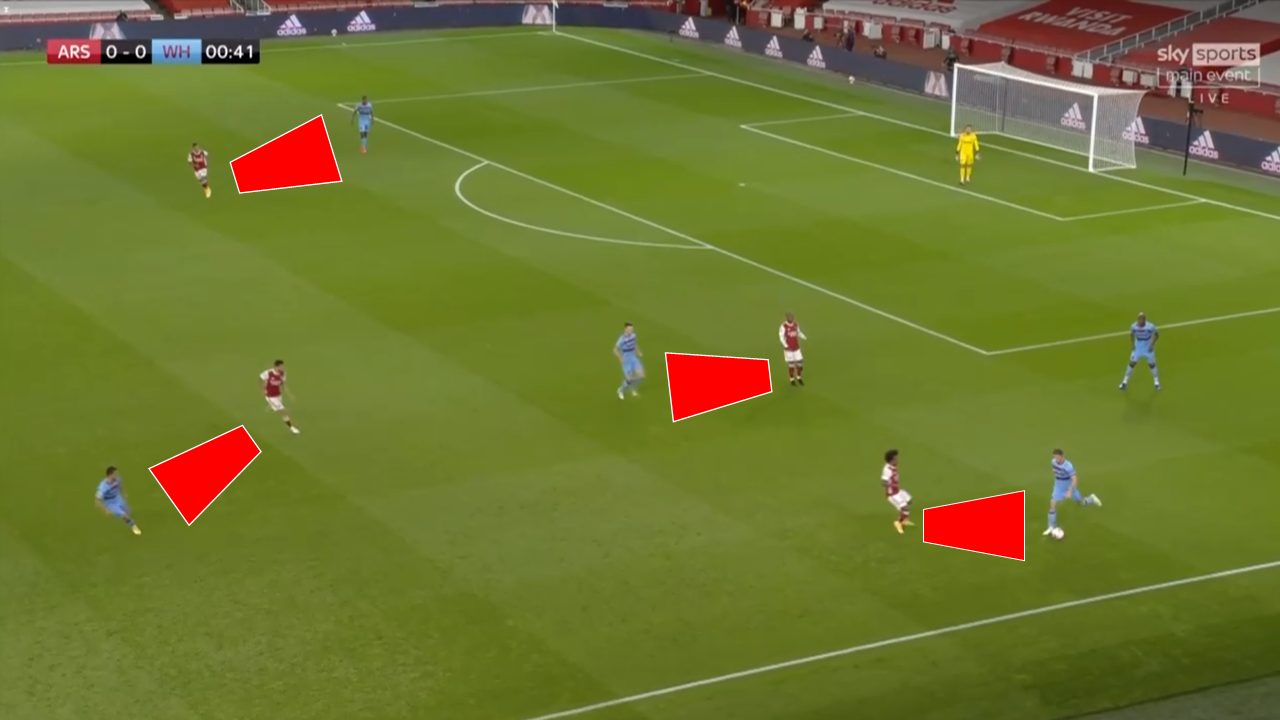 Arteta has certainly delivered a new style of football which has seemingly begun to work for the Gunners. Their pressing off the ball puts the opposition defence under pressure and they also look to cut off the passing options for the player on the ball. A pacey frontline of Pierre-Emerick Aubameyang, Alexandre Lacazette, and Willian is surely intimidating for opposition defenders as they have much lesser time upon receiving the ball. The midfielders in Granit Xhaka and Ceballos also push up to support the press and this often forces the opposition to play long balls which can then be easily cut out. 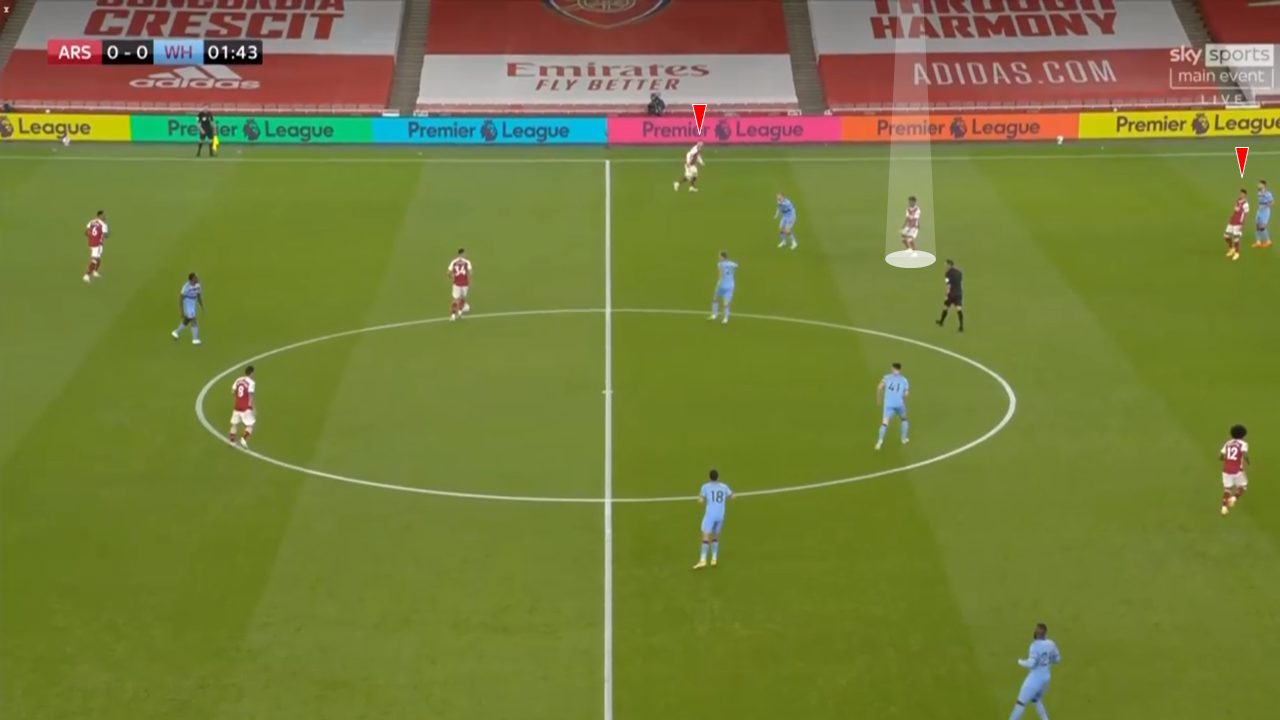 Another feature of this Arsenal side is the use of the left wing-back. The use of Tierney or Kolašinac as the left side third centre-back means that Arsenal could effectively switch to a 4-2-4 formation as well. Saka is allowed to join the frontline and push Aubameyang narrower to have two strikers attacking the goal. Another highlight of this tactic is the movement of Saka towards the centre. Instead of staying near the touchline, Saka has the tendency to move inwards, opening up spaces for overlapping runs from the left-back. Aubameyang also has the freedom to move wide as a winger and this inward movement from Saka also helps in advancing the ball by breaking the lines.

The movement into the half-spaces means that Saka is in prime position to play passes to anyone in the frontline and this was definitely a major issue for West Ham. The Hammers found it difficult to cope with Saka’s dynamic style of play and he often found himself in space after receiving the ball near the centre. Both of Arsenal’s goals were in fact created due to this inward movement from Saka followed by a threaded pass to an attacker. 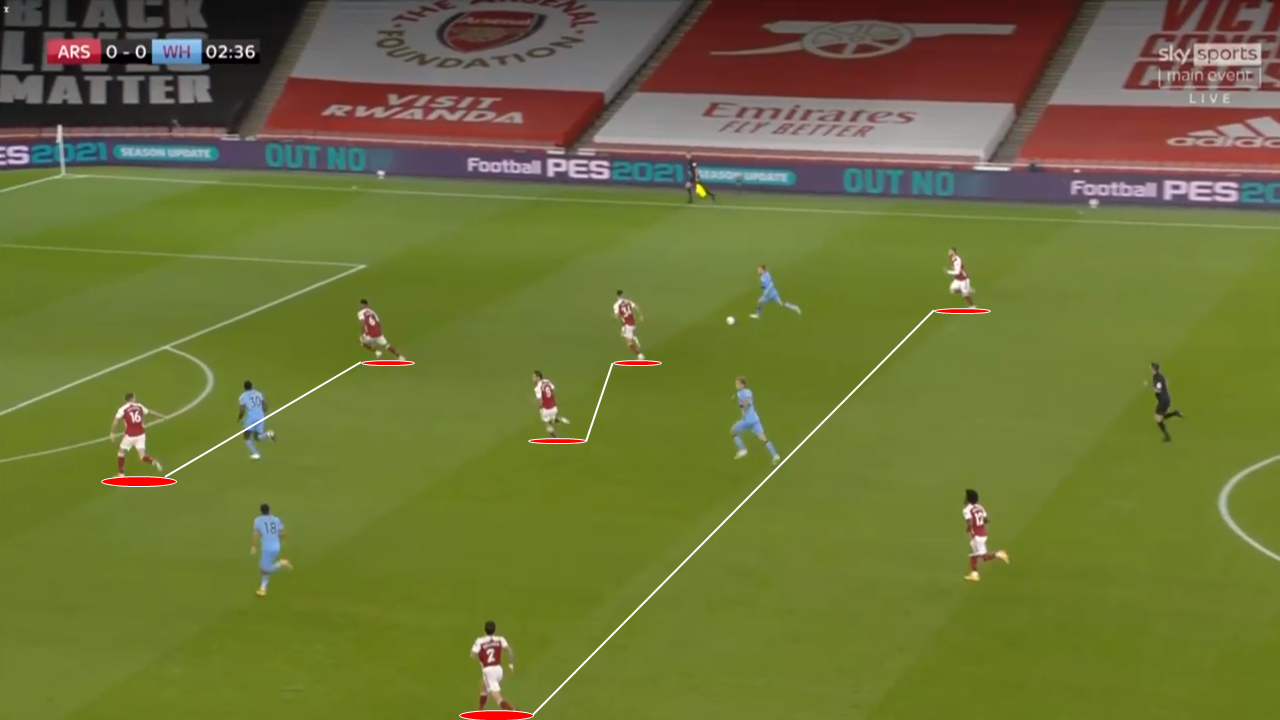 In defence, as mentioned earlier, the side shifted to a 5-2-3 or a 4-2-4 formation. If Saka had ventured too high, then the latter formation would be the form of defence. Both the central midfielders could not avoid their defensive duties and Ceballos and Xhaka had to ensure that they provided cover for their centre-backs. Kolašinac and Hector Bellerin would operate as normal full-backs and would not be as equipped to support the centre-backs since they would have to track back from a further distance and hence the onus fell on the central-midfielders to join the defence. 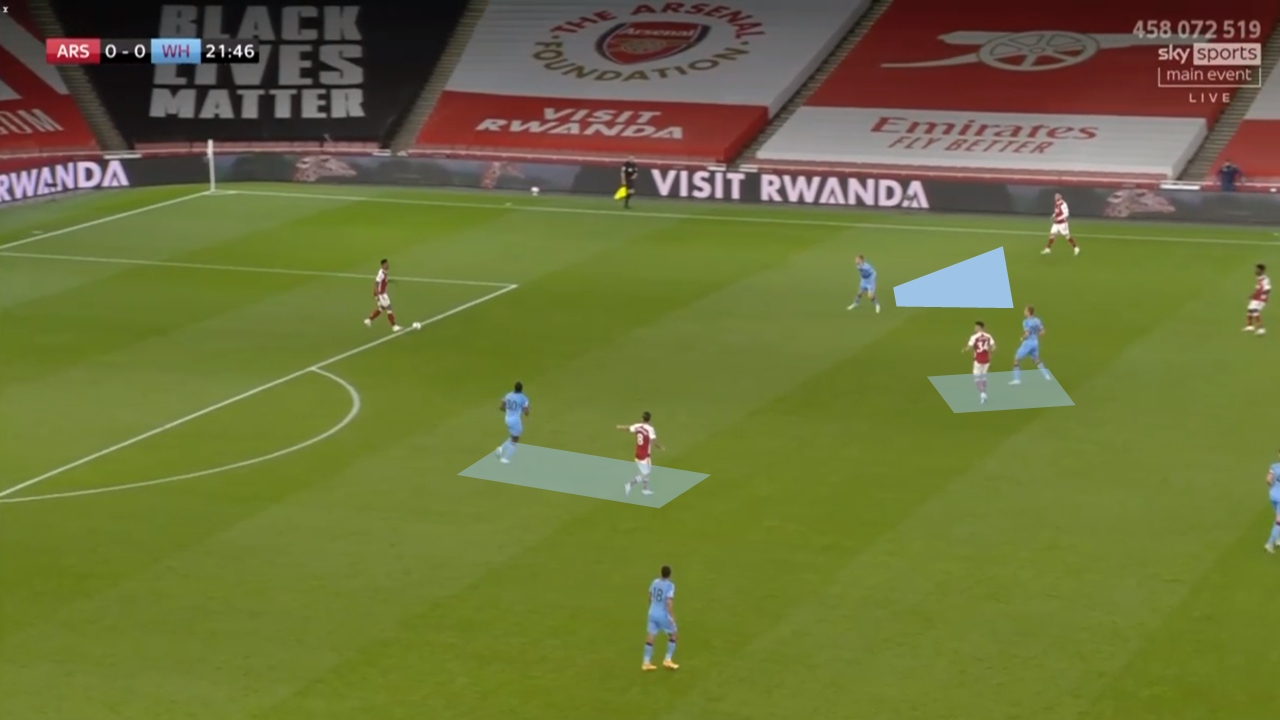 The Hammers looked comfortable sitting off the ball and rather than engaging in an active press and trying to win the ball back, they looked to block the passing lanes. As Arsenal looked to build out from the back, the forward line would move to cut out the passing options through the centre, meaning that the attacks would have to be channelled through the wing where it is relatively easier to control. Moyes’ tactics clearly looked to break up Arsenal’s passing and frustrate them rather than use an aggressive approach for fear of being caught out. 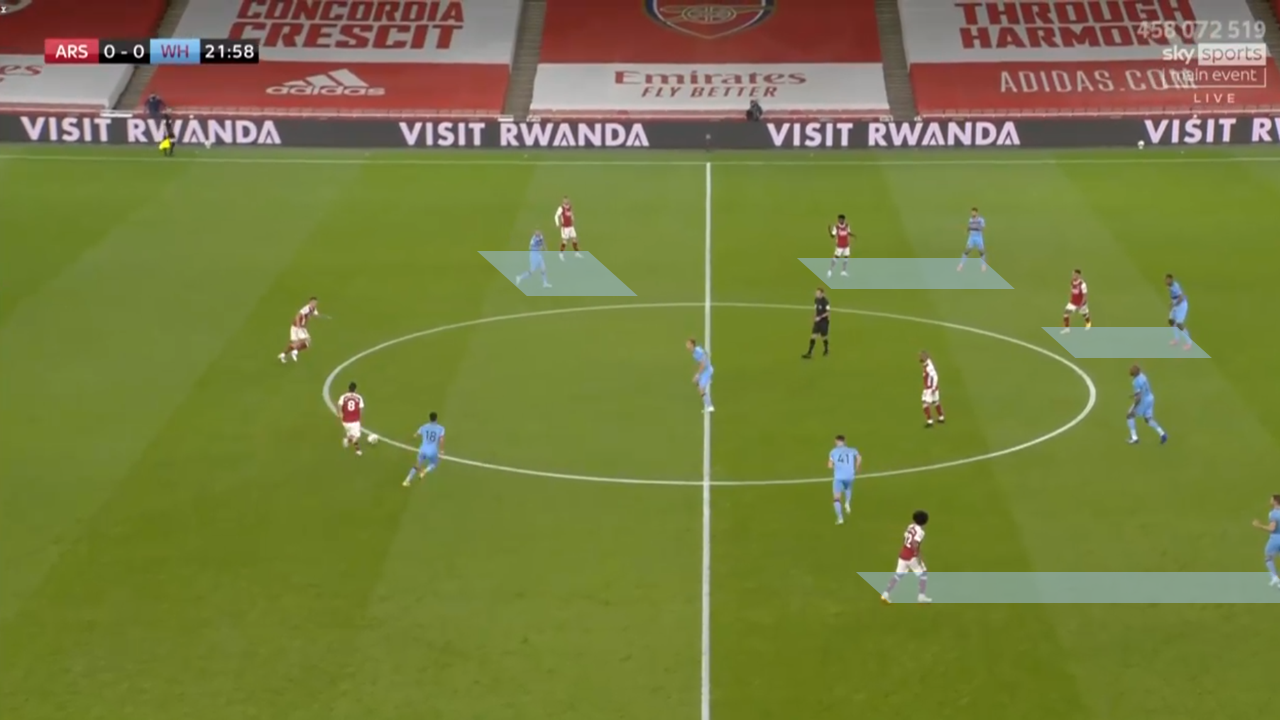 It was more of the same when defending deeper as well. The West Ham players looked to get behind the ball and remain compact, ensuring that they were close to the Arsenal attackers. The compact nature also meant that the Gunners would be swamped by two to three defenders just seconds after receiving a pass and this largely frustrated Arteta’s side. The Hammers could not afford to provide a lot of space for the likes of Saka, Aubameyang and Willian to exploit and although Arsenal managed to go ahead, the defensive tactics of West Ham was largely responsible for stemming the flow of Arsenal attacks. 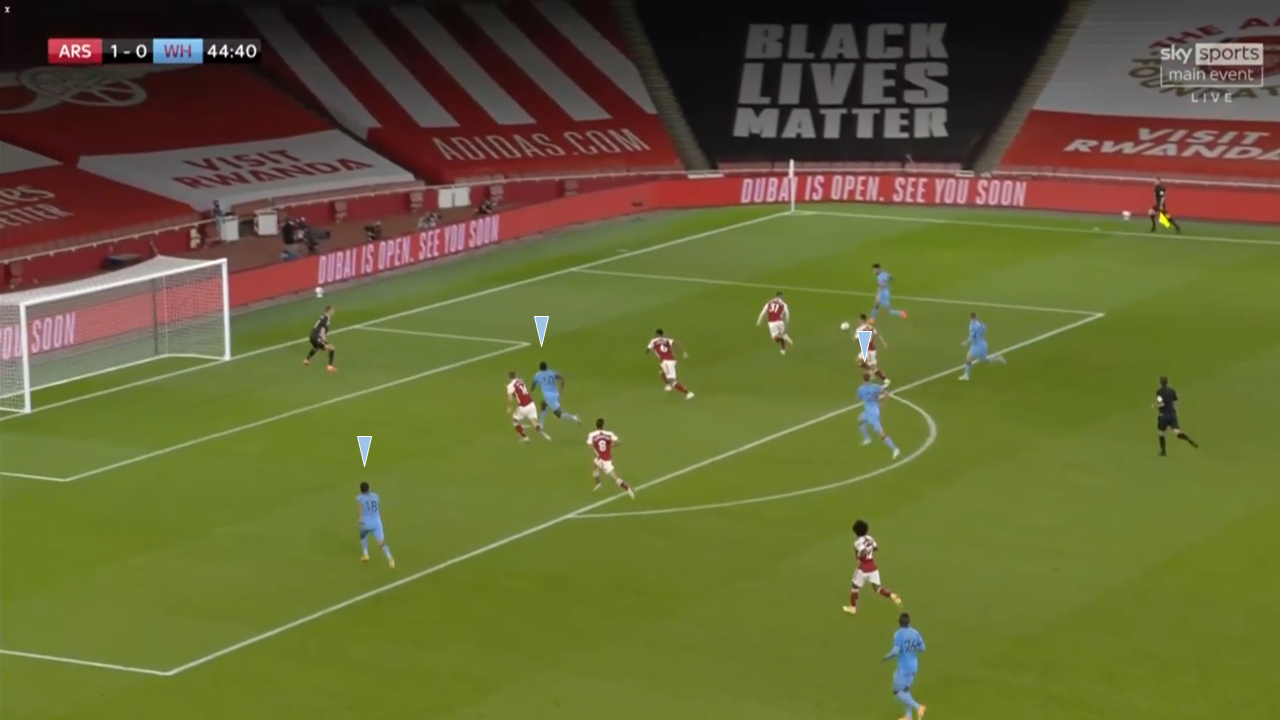 Although they sat back and only looked to attack on the counter, West Ham looked more dangerous from crosses. After initially looking to break towards the centre with the likes of Michail Antonio, the Hammers decided to move out wide before playing crosses into the box. The tactic worked wonders as the side were able to pile the pressure on the Arsenal defence. The flanks were often free as the Arsenal full-backs would be higher up the pitch and since one of the four players (two centre-backs and two central-midfielders) would have to close down the player with the ball, West Ham could create their best chances. This was in fact how they scored their equaliser as shown above. 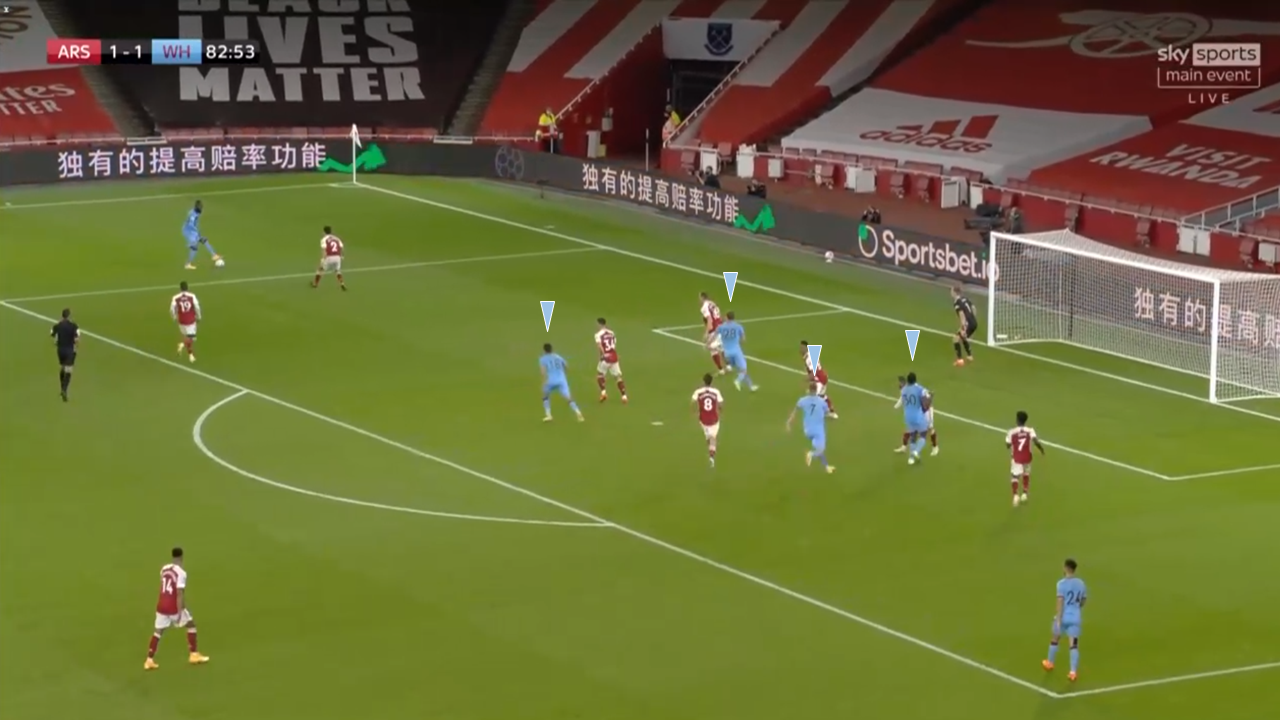 The Hammers also came alive in the second half and enjoyed extended periods of possession as well. Moyes sensed the chance to snatch a crucial three points and committed his players forward, looking to threaten with crosses. The power and pace of Antonio was a real problem for the Arsenal defence and he came as close as hitting the bar with a header as well. Had West Ham been able to convert at least one of the chances that they created, it would have certainly caused panic among the home side who had not registered a shot on target since scoring their first goal.

In fact, the next time the Gunners had a shot on target was when they scored the second goal. After being put under pressure for extended periods, Arteta brought on some fresh legs in order to hit on the counter with Nicolas Pépé and Eddie Nketiah coming on. It was Nketiah that scored the winner in the end, with West Ham once again allowing Saka to drift inwards and thread a pass to Ceballos who squared it for Nketiah to slot the ball home. Though they clearly looked the more dangerous side with their crossing, a slip up in defence cost the Hammers who could not find a way back after that.

Arsenal looked far from their best and after their convincing win against Fulham the week before, this was a good wake up call. They had been frustrated by the West Ham side and had things gone better for Antonio and the West Ham attack, they may have ended up on the losing side as well. Take nothing away from the Hammers though, who put in a much better performance than their previous game and with a tough run of fixtures, would need to repeat this consistently in order to put themselves in a good position in the table.