The new Premier League season kicked off with a London derby, where Arsenal visited newly-promoted Fulham on Saturday. Mikel Arteta’s side had ended the previous campaign quite strongly, defeating Manchester City and Chelsea in successive games to win the FA Cup, and they continued that form to beat Liverpool on penalties in the season-opening Community Shield as well. Fulham too had a decent bit of momentum behind them, having come through the playoffs to beat Brentford in the final and come back to the Premier League at the first time of asking, following their relegation back in the 2018/19 season. Thus, there was optimism on both sides ahead of the new season, with Scott Parker and Arteta looking to bolster their credentials as quality managers while in charge of the sides they played for in the league. This tactical analysis piece will look at both sides’ tactics and detail how Arsenal were able to successfully get past the Fulham midfield on the way to scoring three goals. 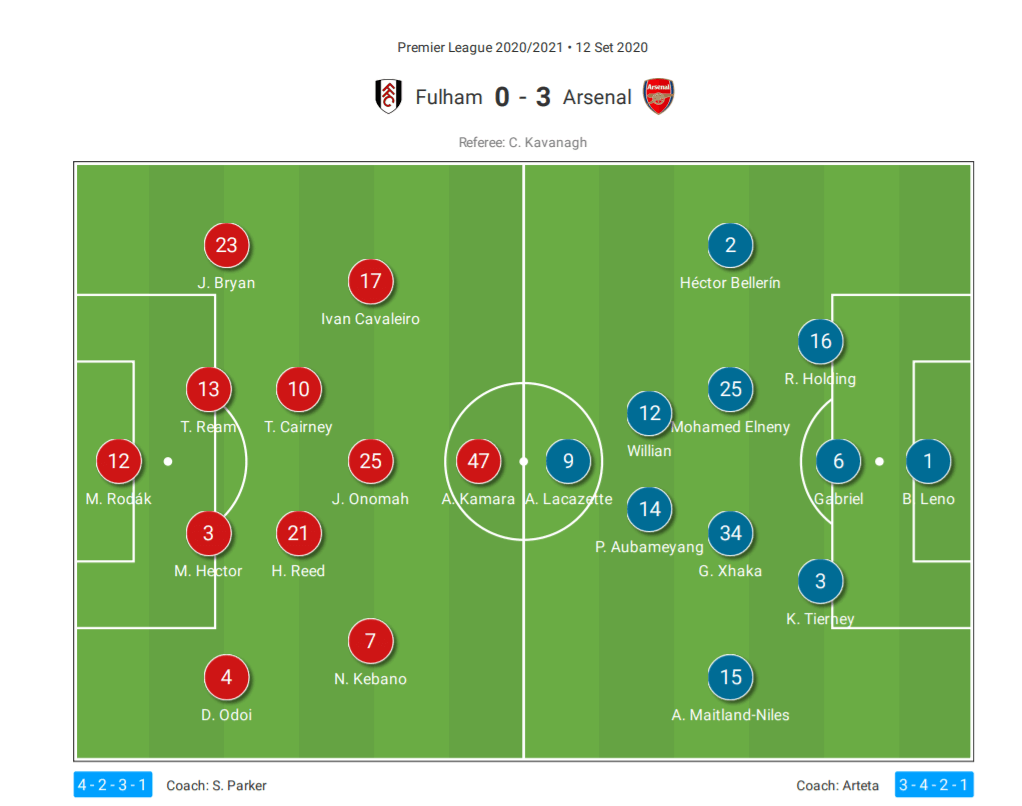 Parker didn’t really change too much from the team that played in the Championship last season. Aleksandar Mitrović was still not fully fit, and so was only on the bench. Aboubakar Kamara started as the lone striker instead, with Neeskens Kebano and Ivan Cavaleiro on the flanks. Joe Bryan continued at left-back, despite the club having signed highly-rated American youngster Antonee Robinson from Wigan, and it was the same story on the opposite side, where Dennis Odoi kept his place, while new signings Kenny Tete and Ola Aina did not make the matchday squad.

For Arsenal, it was a bit of a surprise to see Gabriel Magalhães start his first Premier League game after arriving from Lille. Mohamed Elneny’s resurgence also continued, as the Egyptian started his second successive game, having spent last season on loan at Besiktas. New arrival Willian also played from the start, as part of a front three alongside Alexandre Lacazette and Pierre-Emerick Aubameyang.

Arteta has been brought in to possibly replicate Pep Guardiola’s style of play at the Emirates, having spent three seasons as his assistant at Manchester City. The Arsenal manager does not have the same level of quality in the squad though, and so has been making adjustments to his preferred system and tactics since he was installed in the dugout, to get the best out of this Arsenal squad. Part of those adjustments have seen him adopt a back three on multiple occasions, with the system offering greater defensive solidity than previously shown. The Spaniard continued with this system in this game as well, which meant that Héctor Bellerín and Ainsley Maitland-Niles played as the wing-backs. Maitland-Niles has previously shown a lot of positional flexibility when played in this role, and that was the case in this game as well. The Englishman would play as part of a traditional back five when Fulham had possession, but when Arsenal had the ball, he would come inside and position himself as the third central midfielder, alongside Xhaka and Elneny, with the license to push on into the opposition box.

This was part of a deliberate strategy by Arteta, which has been seen previously as well, where his side changes from a back five out of possession to a back four in possession. Maitland-Niles plays a key role here, as his positional versatility allows him to move into central areas, with Keiran Tierney then able to take up positions akin to a left-back, from his left-sided centre-back role. This gave Arsenal an extra man in midfield, while also providing a threat in behind when Lacazette dropped deep to link up play.

It was a similar situation on the opposite flank as well. Willian’s arrival has meant that Arsenal now have an attacker who is comfortable playing in the central areas and half-spaces, which they have lacked ever since Mesut Özil’s banishment from the team. However, Willian is equally adept at playing out wide on the right, which is where he spent the majority of his Chelsea career. Playing as part of a front three in this game, he would often go out to the right wing to play as a traditional winger, which would then open up the space for Bellerín to drive infield.

These positional interchanges made it very difficult for Fulham to mark the Arsenal attackers, especially as Lacazette would often drop off to link play and create space for Aubameyang to cut into from the left. Willian’s movement, in particular, was very intelligent, and it will be very interesting to see how Arteta uses the Brazilian going forward, especially once he decides to move back to a back four system. Willian could potentially thrive as a number 10 in a 4-2-3-1, should Arteta choose to deploy the system.

The home side were far from hapless, though. Despite conceding an early goal, they managed to stifle Arsenal for the next 15-20 minutes, with the midfield and wide players working hard to cover space and deny easy passing options. Central to this was the fact that Fulham began to aggressively press and mark Xhaka and Elneny, depriving Arsenal of central options to pass to when their centre-backs had the ball.

Thus, around the half-hour mark, Arsenal began to use another subtle positional rotation. Granit Xhaka would drop into the backline, giving Arsenal a ball-progressing option from deep, while Tierney could then once again go out onto the touchline, and Maitland-Niles came inside. This movement also created space for Aubameyang, as Odoi would get drawn out towards Tierney, leaving a lot of space between him and Michael Hector, the right-sided Fulham centre-back.

This flexibility of roles and positions will serve Arteta well going forward, as he can adapt his team’s system and style of play quickly within games based on the opposition.

The home side, in complete contrast, struggled to have any meaningful possession, and rarely threatened Arsenal’s goal. There was a distinct lack of penetration, with the wide players easily nullified by Arsenal’s wing-backs, while the central midfield trio was unable to influence proceedings as they would have liked.

Josh Onomah was peripheral in the game, not being able to effectively link midfield with attack, nor providing a threat in behind the Arsenal defence. Indeed, there were multiple occasions where the Fulham attackers would be far too central, with nobody making a run behind the defence either to stretch the defence. The result was that it was relatively easy for Arsenal to cover space as well as block potential passing options.

This is just one example to show how static Fulham’s attackers were. Based on the playing style we saw in the Championship, Fulham will usually play a slow, possession-based game, but that style of play will not work if their attackers are not more dynamic and willing to make runs to create space, as well as drag opposition defenders out of position. Parker desperately needs an injection of quality into his forward options, or else it is likely that Fulham will struggle to create chances this season.

While Arteta also espouses a possession-based approach, his team are also adept at quick, fast attacks in order to take advantage of their opposition being out of position. Arsenal often play out from the back in order to draw the opposition press in, and then quickly move the ball up the pitch with a couple of direct passes to then be able to attack with numbers at a rapidly backpedalling defence. This was seen perfectly in the build-up to the third goal, lashed into the top corner by Aubameyang.

It was interesting to note that Fulham’s attempts to play out of the back were often successfully foiled by Arsenal, in contrast to their own insipid press.

Arsenal’s press was not very high in this match, but on the occasions that they did put pressure on Fulham, the home side did find it difficult to play through. Once again, Parker has cultivated a slow, patient approach at Craven Cottage, but the improved level of pressing in the Premier League could mean that his team get caught out like this. They will either need to improve the tempo of their passing, along with better positioning from their midfielders, or recruit defenders better suited to playing out from the back.

The opening fixture of the new Premier League season would have brought a lot of satisfaction for Arsenal fans, as there is even more clear evidence of Arteta’s tactics and strategy being used on the pitch. Arsenal look like they have an identity again, which is more than can be said of the previous regime under Unai Emery. While the gap towards Liverpool and Manchester City is still quite formidable, there is no reason why Arsenal cannot be in the conversation for Champions League places once again, and cohesive, well-drilled displays like this will only help them climb up the table as the season progresses.

While this was just one match, there are already worrying signs for Fulham. Their possession-based approach may have worked to an extent in the Championship, but the Premier League is a much faster league, and so there is a risk of them becoming a sterile team who dominate possession but struggle to create chances. On this evidence, Fulham need some creative, dynamic players who are able to move the ball around at pace, and also get in behind the opposition’s defensive line. Scott Parker may need to ask the Fulham hierarchy to dip into the transfer market to solve those needs, failing which the Cottagers could be in a relegation struggle once again.