Jonathan Woodgate’s resurgent Middlesbrough side returned to the capital – after playing ex-side Tottenham on Tuesday – this Friday night for a game under the lights at Craven Cottage. Another ex-player turned head coach in Scott Parker is aiming to guide Fulham back to the Premier League immediately. A win here for the Cottagers would take them up to third and just four points off the automatic promotion places ahead of the Saturday kick-offs.

Woodgate’s first few months could be described as shaky, with many Boro fans calling for him to go and the homegrown project to be scrapped. However, since the November international break, form has drastically picked up with the Teesside club now sitting 10 points above the relegation zone, alleviating fears of a battle with the drop and Woodgate getting the sack.

In this tactical analysis, we shall look at the tactics deployed by Fulham and Middlesbrough in this EFL Championship clash and we’ll use analysis to see why Fulham got the win. 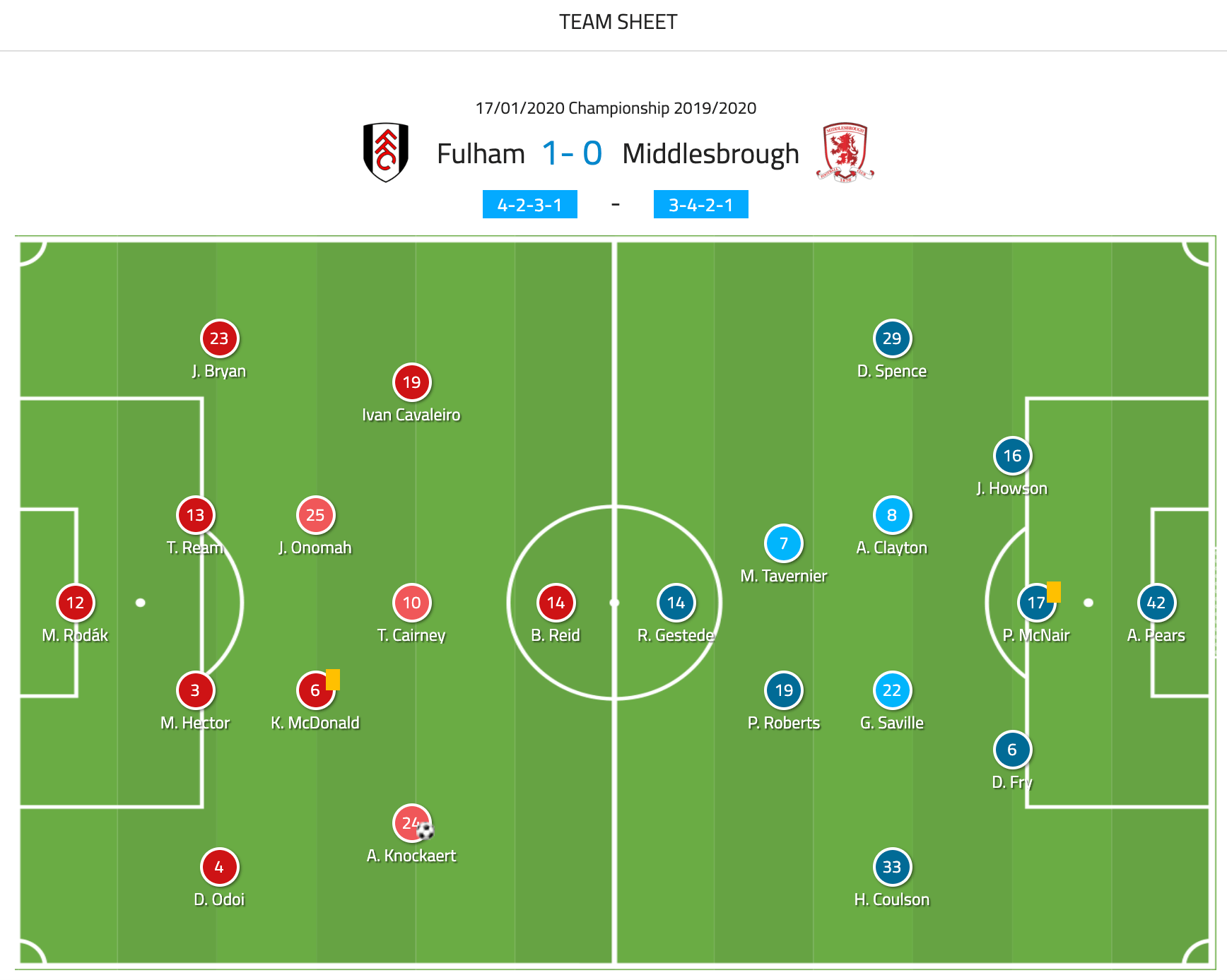 In the 80th minute last week away at Hull City, the moment Fulham fans were dreading had occurred. Aleksandar Mitrović was taken off injured with an ankle ligament problem, seeing the Serbian now away from action for three weeks. For this Friday night clash fan favourite Tom Cairney returned to central midfield, seeing Bobby Reid move up the field into the position of lone striker. Attacking left-back Joe Bryan also came in in place of Cyrus Christie, resulting in Denis Odoi switching sides to go to right-back.

Woodgate made two changes to the team that drew 2-2 with Derby County last time out in the EFL Championship. 6’3” target man Rudy Gestede replaced Ashley Fletcher while Adam Clayton took the place of Lewis Wing. The two youthful wing-backs Hayden Coulson and Djed Spence have both emerged from the academy this season to cement their places as first-team starters, and they continued that trend this game.

When playing a 5-2-2-1 formation, as the away side were for this match, there is reduced defensive coverage of the wide areas. Woodgate opted to play Patrick Roberts at right-wing, immediately in front of Spence who was at right-wing-back. Roberts is heavily left-footed and has a preference to cut in on his favoured foot. The problem with this tendency is that it isolates the inexperienced Spence against Ivan Cavaleiro and the venturous Bryan.

In this example below, just 50 seconds in, the problem is already evident. Fulham have escaped pressure in the right channel and gained a yard of space to switch the play to the overlapping Bryan. However, Roberts and right-central-midfielder Adam Clayton have shifted over too much leaving Spence in a 2 v 1. This time a moment of hesitation allowed the Boro defence to return to a balanced defensive structure but this switch of play was a common occurrence, of which the game’s only goal arose from. 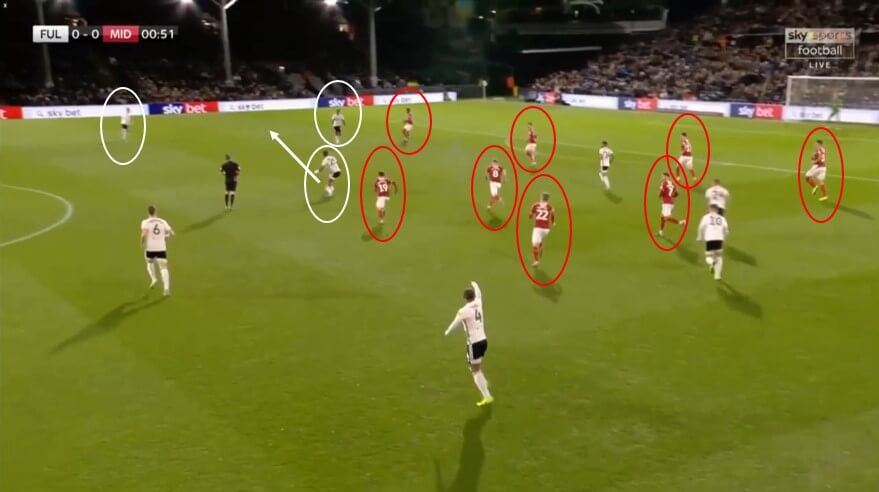 Similarly here, below, Josh Onomah receives the ball and plays it on out wide where again there is a large amount of space freely available. Roberts and Clayton have once more shifted across too far allowing Bryan great amounts of space to attack and utilise his attacking qualities. 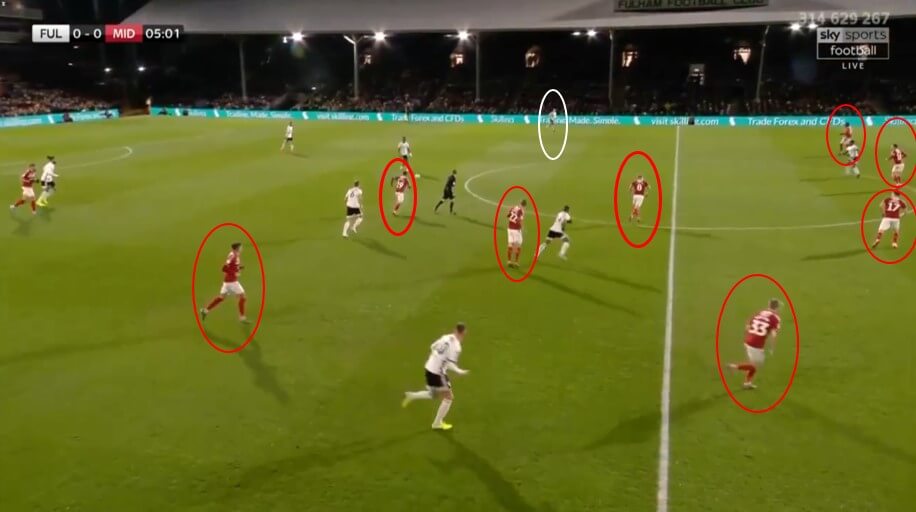 There is a deeper concept tactical concept at play here: overloading to underload. Fulham are building up through their right side with Odoi remaining deeper, Cairney coming wider than you’d expect and Anthony Knockaert also stretching the play by hugging the right touchline. This results in the away side having to shift to its left in order to maintain compactness, but this process also requires excellent cooperation to minimise opportunities for simple ball progression. Herein lies the issue that Woodgate’s side encountered. An over-committal to their left-flank gave them an overload but the technical ability of Fulham saw them escape pressure and switch it to an underloaded area, such as their left-wing. Additionally, the 3 v 2 numerical superiority Fulham had in the midfield, combined with that trio’s positional awareness, gave them more passing lanes when under pressure.

These graphics above are the respective average positions for both teams. Note how left-back Bryan is past the halfway line whereas Odoi is deeper than pivot Kevin McDonald. We can also see in Boro’s graphic the more central nature of Roberts’ positioning and the subsequent lack of protection for Spence that I talked about.

As you would probably expect the majority of effective Fulham attacks consequently came down this side. Above is the graphic of their positional attacks, displaying how 16 attacks came down the left generating 1.71 xG (68% of their total).

Taking the place of such a consistent goalscorer in Mitrović is an extremely difficult task. The Cardiff loanee has a very different profile to that of who he replaced. To begin with, Reid is six inches shorter. Much of the Serbian forward’s game is centred around his physicality and winning aerial duels – either bringing teammates into play or going for goal from crosses. Reid is obviously not suited for that strategy, he instead takes advantage of his quick feet to feed the potent wingers, Cavaleiro and Knockaert.

Above is his heatmap, and the most evident concentration is within the left half-space, linking with Cavaleiro. The distribution of ‘heat’ is sparse, portraying his inclination to roam and drop back.

In the example below Reid has undertaken a movement synonymous with being a false nine. The 26-year-old has fallen back from his striker position to support the build-up in central midfield. This movement into a pocket of space has attracted Clayton, thus vacating another portion of space. Subtle actions such as these open up space for players like Cavaleiro and Knockaert to exploit. 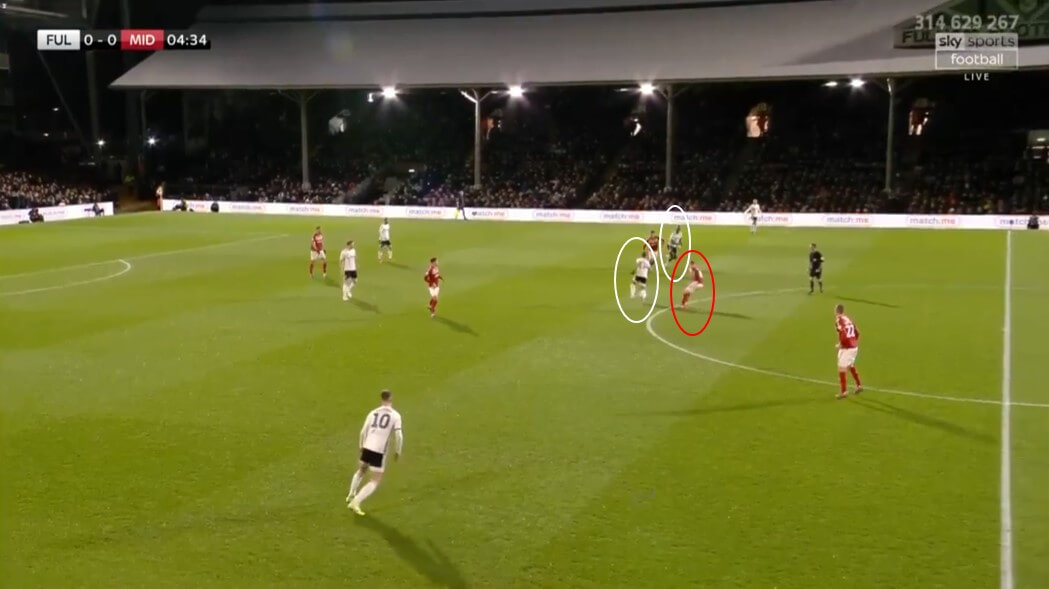 In this instance below Reid demonstrates his dribbling ability. He has already jinked past Clayton and then proceeds to go past Paddy McNair. Similarly to dropping deep, engaging defenders, such as this situation, naturally creates space elsewhere. Here, Reid releases Cavaleiro who can take advantage of his dribbling ability when going up 1 v 1 against Spence. 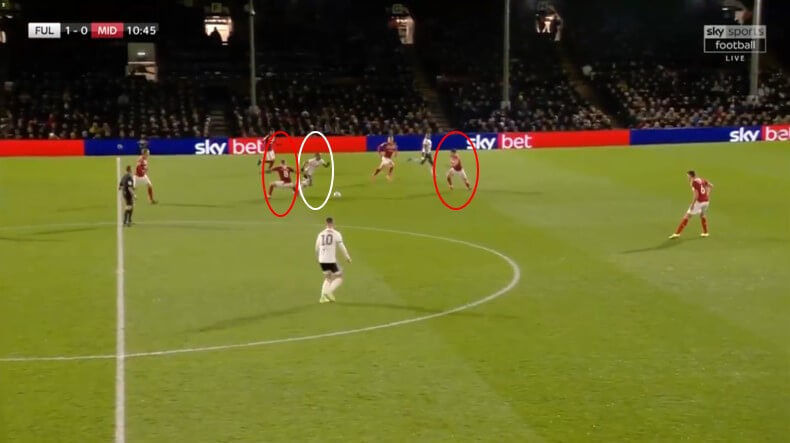 How did Middlesbrough try to rescue the game?

Jonny Howson has been very versatile in his Middlesbrough career. As well as his regular central-midfield position, he has also been deployed as a full-back and wing-back. In this game, Woodgate chose to place him at right-centre-back. His technical qualities are well suited for that role as it requires incisive passing towards forward players.

I’ve mentioned the joy that left-back Bryan especially was getting in his ventures forward. To combat this, Woodgate seemingly instructed Howson to be more offensive-minded, with a side-effect being Spence going further up the pitch as well. The intention of this adaptation was to pin back Bryan, to ensure his primary focus was upon his defensive duties. This also forces back winger Cavaleiro, or if he neglected his role, creates an overload on the right flank. 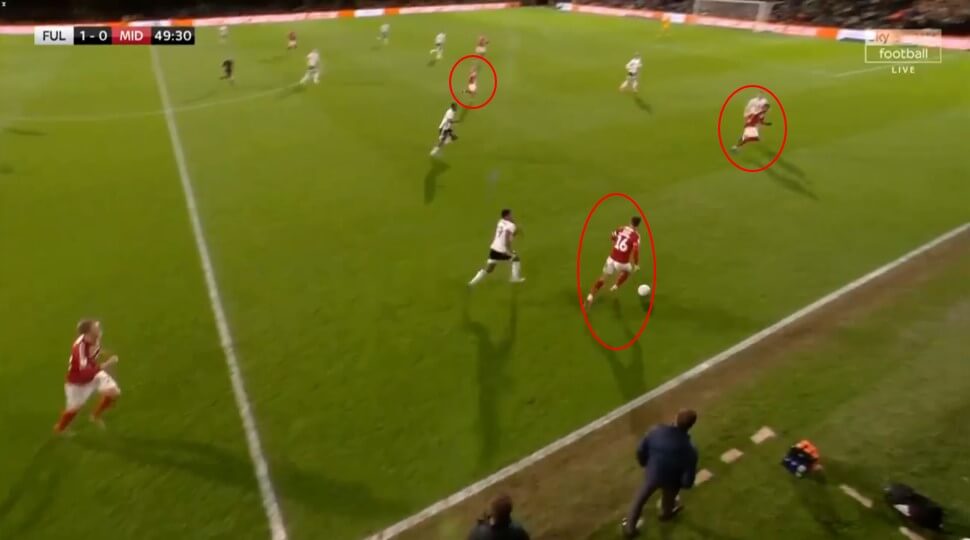 In this still above, just after the break, we can see how advanced Howson is for a centre-back. You can also see how Spence is occupying Bryan and making a depth run, stretching the play, and thus giving Roberts more space between the lines – on this occasion, Roberts isn’t picked out. 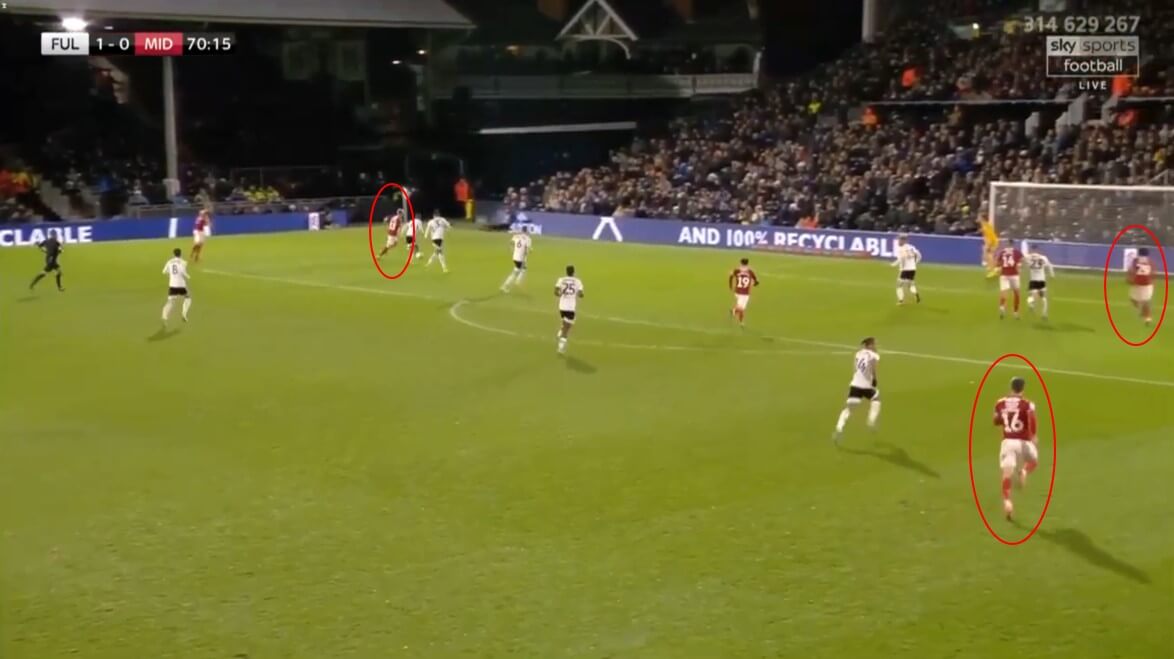 This other example, shown above, also illustrates the increased freedom the two youthful wing-backs had after the break. Coulson, on the left, has a crossing opportunity while Spence is standing at the back-post. Howson charging in from his defensive position is also visible.

However, the Teeside club’s efforts were wholly unsuccessful. As per xG statistics Boro’s attempts to fashion chances were insignificant – during the whole game they only registered 0.28 xG, and 0.09 in the second half when they were chasing the game.

An intense opening half-hour that involved Knockaert getting the single, winning goal that secured the home side the victory. The technical quality of the Fulham side was demonstrated to great effect, showing off the fluidity and energy we should expect from such a supremely talented squad. Getting back-to-back clean sheets though will please Parker, even more, I’m sure.

A short turnaround after their FA cup replay against Jose Mourinho’s Tottenham was visible in Boro’s play. They lacked purpose and quality in moments when it was exceptionally needed.