Since 1907, Os Derby de Lisboa has divided Portugal’s capital, one side represented by the verde e branco of Sporting Portugal, the other identifying with os encarnados of Benfica. The tense affair pits the royalty and upper-class backed Sporting against Benfica, the everyman’s club of Portugal.

Despite the wide gap in the standings, this match had all the intensity and aggression you’d expect from Portugal’s most famous rivalry. Ultras had their say too, delaying the start of the second half by five minutes as they hurled smoke bombs onto the pitch. After 80 scoreless minutes, Benfica was able to break capitalize on Sporting’s defensive miscues for a 2-0 Liga NOS victory.

In this tactical analysis, we’ll examine the tactics used by Bruno Lage that led to Benfica’s quick start and Silas’ adjustments to control the middle. An analysis of Lage’s substitutions is necessary too, as Rafa Silva’s immediate impact helped Benfica regain their footing and led to the winger’s brace. 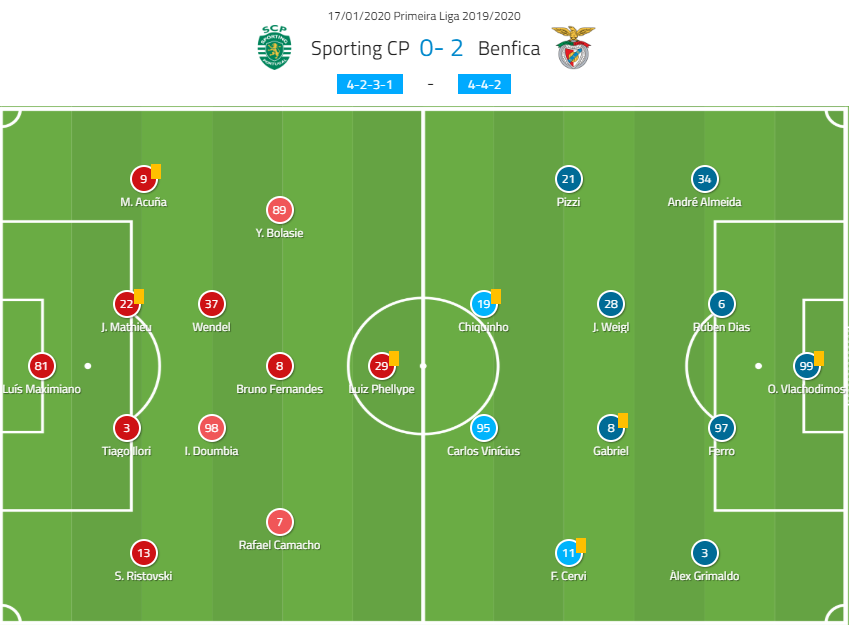 Silas lined up his Sporting side in a 1-4-2-3-1 with youngster Luís Maximiano in goal and a backline featuring Stefan Ristovski, Tiago Ilori, Jeremy Mathieu and Marcos Acuña. Wendel and Idrissa Doumbia operated in a double pivot with Bruno Fernandes ahead of them. Yannick Bolasie moved to the left side of the field to make room for Rafael Camacho on the right. Rounding out the formation was Luiz Phellype at striker.

Bruno Lage set out his Benfica team in their typical 1-4-4-2. Odisseas Vlachodimos took his place in goal while André Almeida, Rúben Dias, Francisco “Ferro” Ferreira and Álex Grimaldo composed the backline. In the midfield, Julian Weigl and Gabriel Pires played central and more defensive while Pizzi and Franco Cervi operated on the right and left, respectively, pushing high into the half-spaces to support of Chiquinho and Carlos Vinícius.

During the first 15 minutes of the first half, Benfica had Sporting on the ropes as the high press and central dominance set the tone. Though Sporting certainly didn’t help themselves in the early stages, Benfica’s well-positioned high press resulted in a number of quality opportunities. In the first 12 minutes of the match, Benfica produced an exceptional 0.72 xG and saw another cross from the right-half space whiz dangerously through the six.

Of the three shots the visitors produced in the opening 12 minutes, Cervi’s second-minute shot had a .59 xG. Only a sliding recovery tackle from Ilori denied the Argentine. The final pass on the first two shots came from the half-spaces, the first from a negative cross, while the third shot came from the right-half space. With Sporting struggling to cope with Pizzi and Cervi’s high, narrow starting points and aggressive pressure.

As the Águias pressed high up the pitch, Gabriel and Weigl cleaned up the attempted progressive passes. Between the two, they recorded 12 recoveries, nine in the opposition half. Their success in recovery allowed Benfica to keep the forwards and wide midfielders high and narrow. With the outlets in place, Gabriel and Weigl simply had to relaunch attacks with penetrating passes to the central channel and half-spaces. Though Sporting analysed their situation and made the necessary adjustments, Benfica’s strong start forced Sporting to play more narrowly, which suited Benfica. 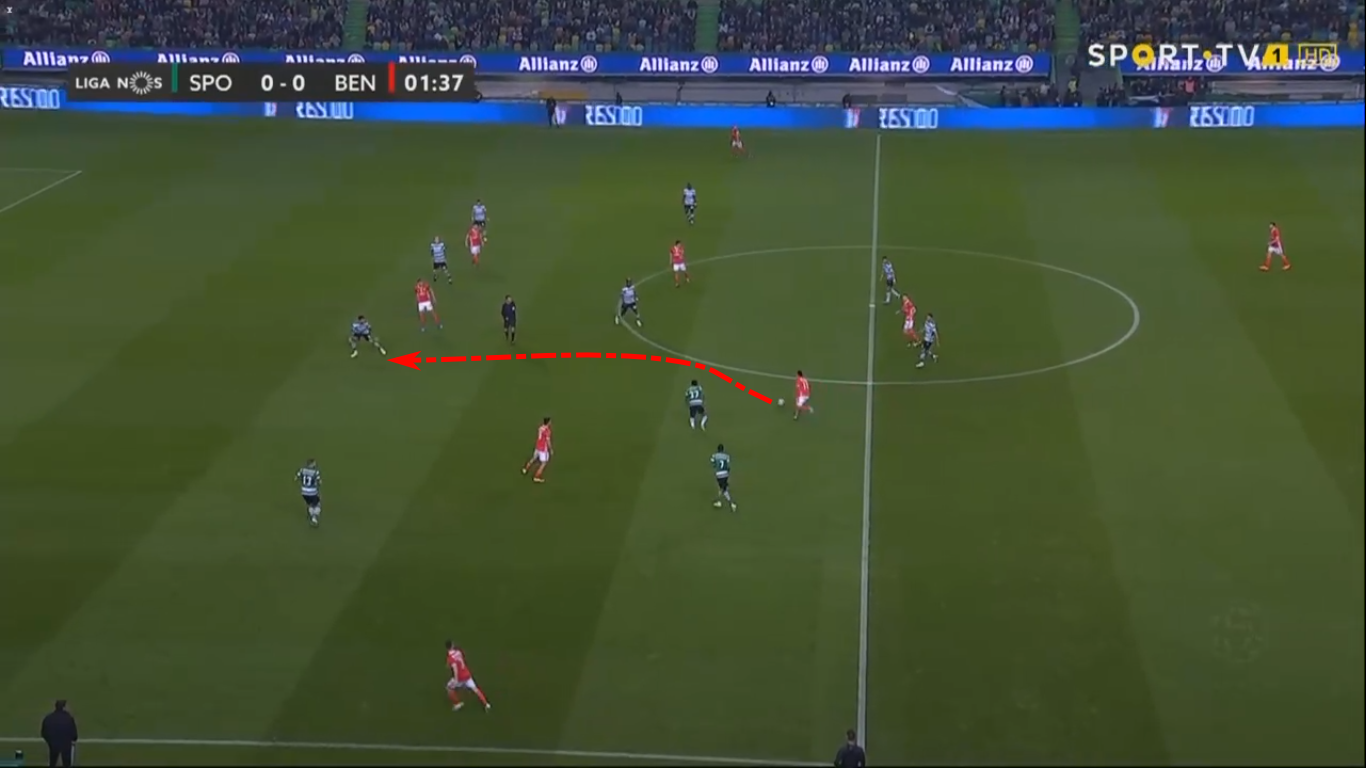 Straight away, Benfica’s high press resulted in a turnover near midfield. Ferro played the ball to Cervi, whose mazy dribble split the Sporting holding midfielders, allowing the Argentine to run at the backline.

Ilori did well to delay the attack, giving Mathieu enough time to cover. As Cervi played Vinícius in, Maximiano hurried off his line, getting the slightest touch on the ball to push it wide. 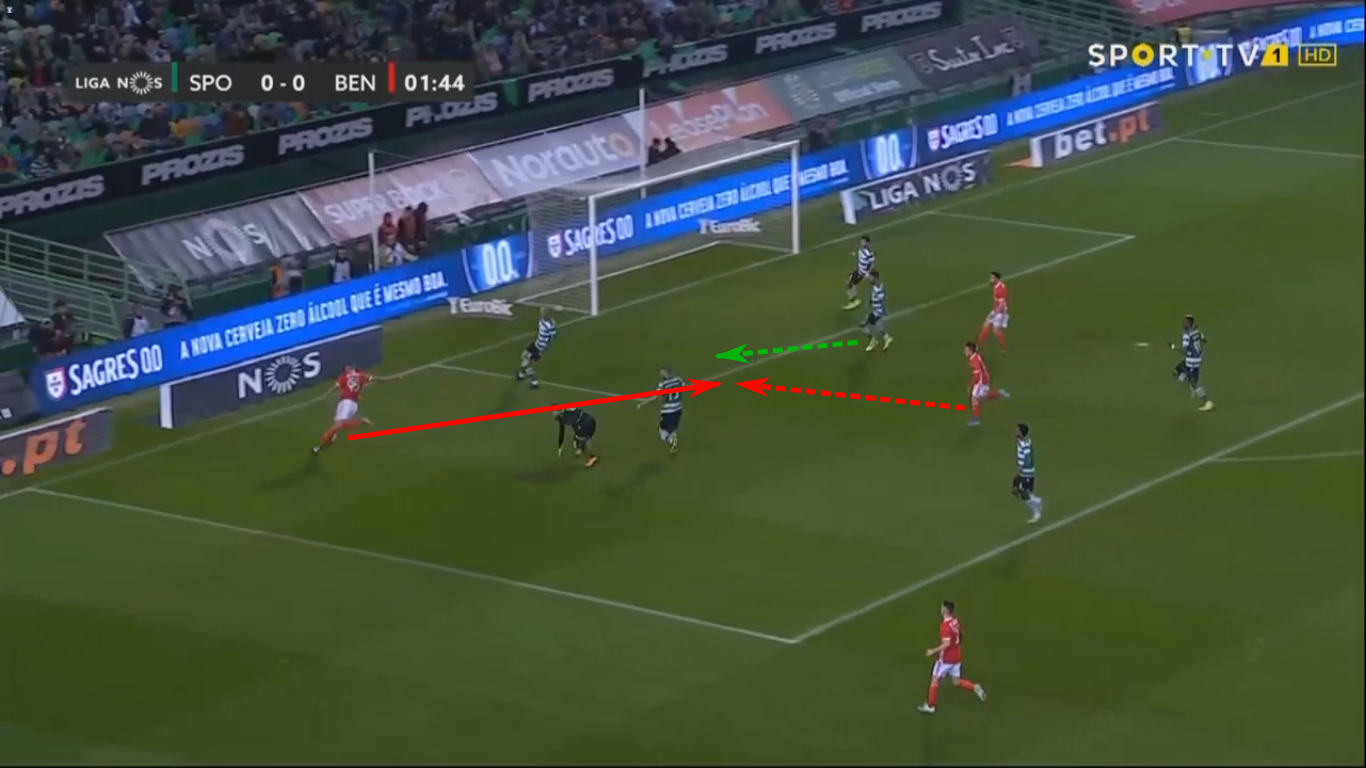 As the keeper scrambled back to goal, Vinícius sent a negative cross from the half-space, a tactic analysed in the preview, but Ilori’s sliding tackle blocked Cervi’s attempt. 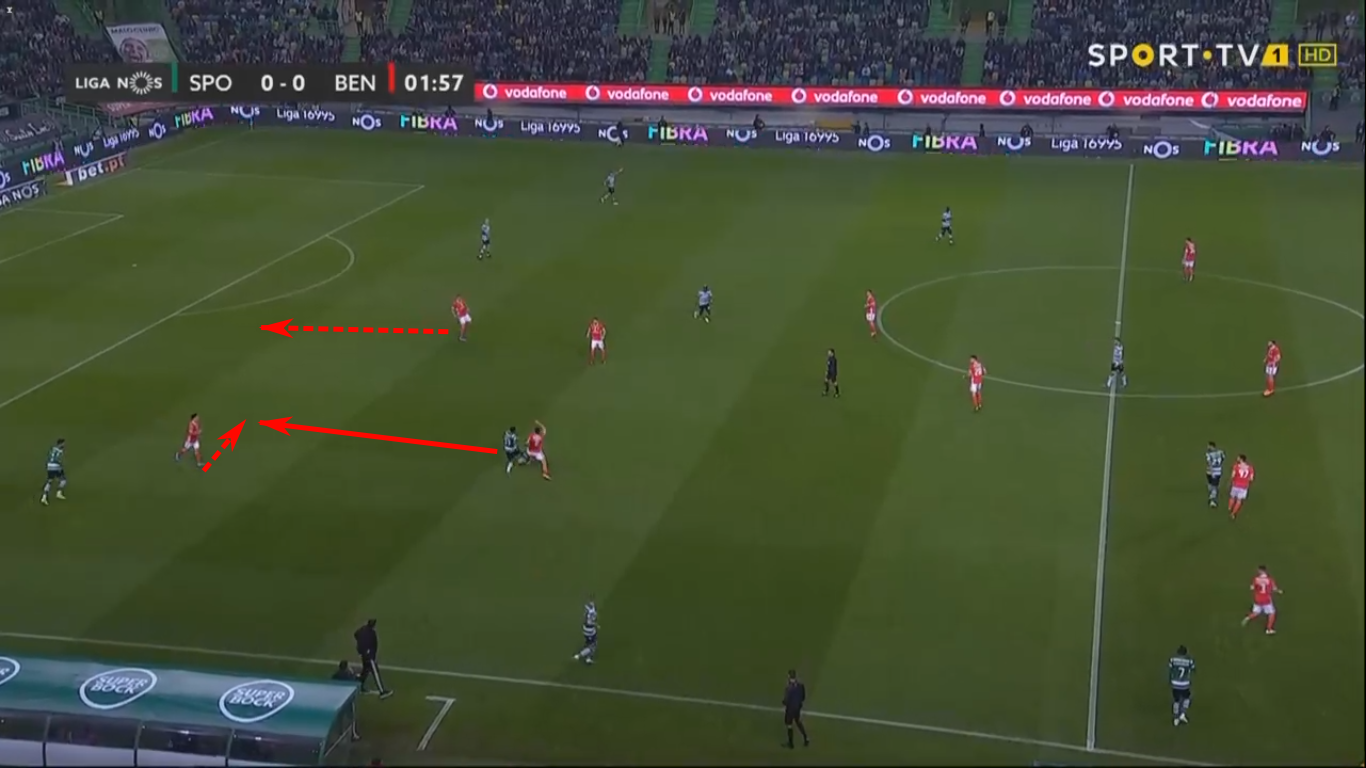 Moments later, Sporting’s bad start continued as Wendel was pickpocketed while awaiting an invitation to pass. You can see Ilori and Mathieu, the nearest Sporting players, are well wide. Gabriel poked the ball to Cervi, who played Vinícius through to goal. The burly Brazilian opted to shoot early and rocketed his shot just over the crossbar. The combination of a good high press and access to the half-spaces on either side of the six-yard box allowed Benfica to record four shots in the first 12 minutes of the game.

Sporting gained control of the middle

One of the issues Sporting Portugal had at the start of the match is that Benfica was able to get the two forwards and wide midfielders between the lines, reducing Wendel and Doumbia to recovery defending. As referenced in my tactical preview, Benfica likes to play the four midfielders narrowly with the two wide players operating in the half-spaces. That starting point better connects them to the forwards and allows them the crash the box. Sporting struggled to keep Pizzi and Cervi in front of the holding mids in the opening 12 minutes. Plus, slow build-ups and sloppy first touches resulted in turnovers, allowing the guests to run at the Sporting backline.

Once Sporting snapped out of its tactical funk, Benfica’s chances on goal were limited to set piece opportunities. Of the away side’s 1.67 xG for the game, 0.72 came in the first 12 minutes. In fact, from the 12th minute to Rafa’s goal in the 80th, Benfica only managed four shots off of set pieces and Cervi’s blocked shot in the 76th minute. Of those four set-piece shots, one was saved and the other three sent wide.

Quicker, cleaner build-ups and better positional awareness from Wendel and Doumbia helped turn the tide of the match. With those two tactical points in place, Sporting was able to stretch Benfica with long balls to Camacho and quick lateral passes. If you haven’t seen the stunning 60-metre pass from Fernandes to Camacho in the 13th minute, it’s certainly worth finding. Camacho has generally played on the left-side this season. Although Silas’ decision to start the young Portuguese on the right was an initial surprise, it became clear that Os Leões wanted to use his pace to get behind Grimaldo, getting the starlet 1v1 with Ferro. Between Camacho and Bolasie’s success on the wings, Benfica’s outside-backs had to play more conservatively.

From the 20th minute to the 80th, Sporting enjoyed nearly twice as much possession as Benfica, outshooting its archnemesis eight to one from the 33rd minute to the 79th. The difference in xG went to the host during that timeframe with a 1 to .03 superiority. That said, the greens and whites produced its best chances in the run of play during the first half. In the second stanza, Benfica reduced Sporting to set-piece opportunities. 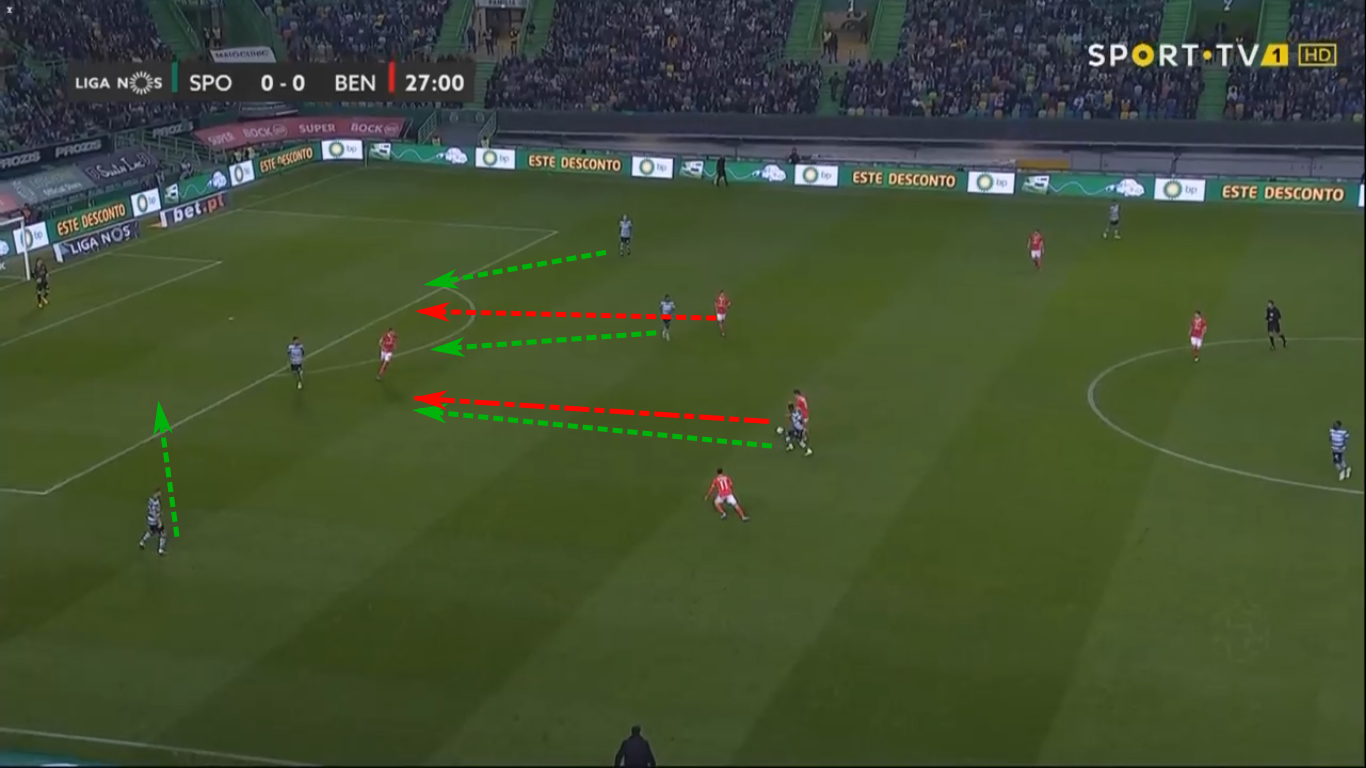 Very similar to the situation highlighted in the previous section, Benfica’s high press led to a recovery deep in Sporting’s end. Sporting was building out of the back when Doumbia’s poor touch resulted in a turnover. Though Benfica has four players up high, notice the difference in Sporting’s positioning. Mathieu is still too far wide, but Ilori and the two holding mids are central and deep to counter-press. Ristovski is also close enough to recover and support his central teammates. 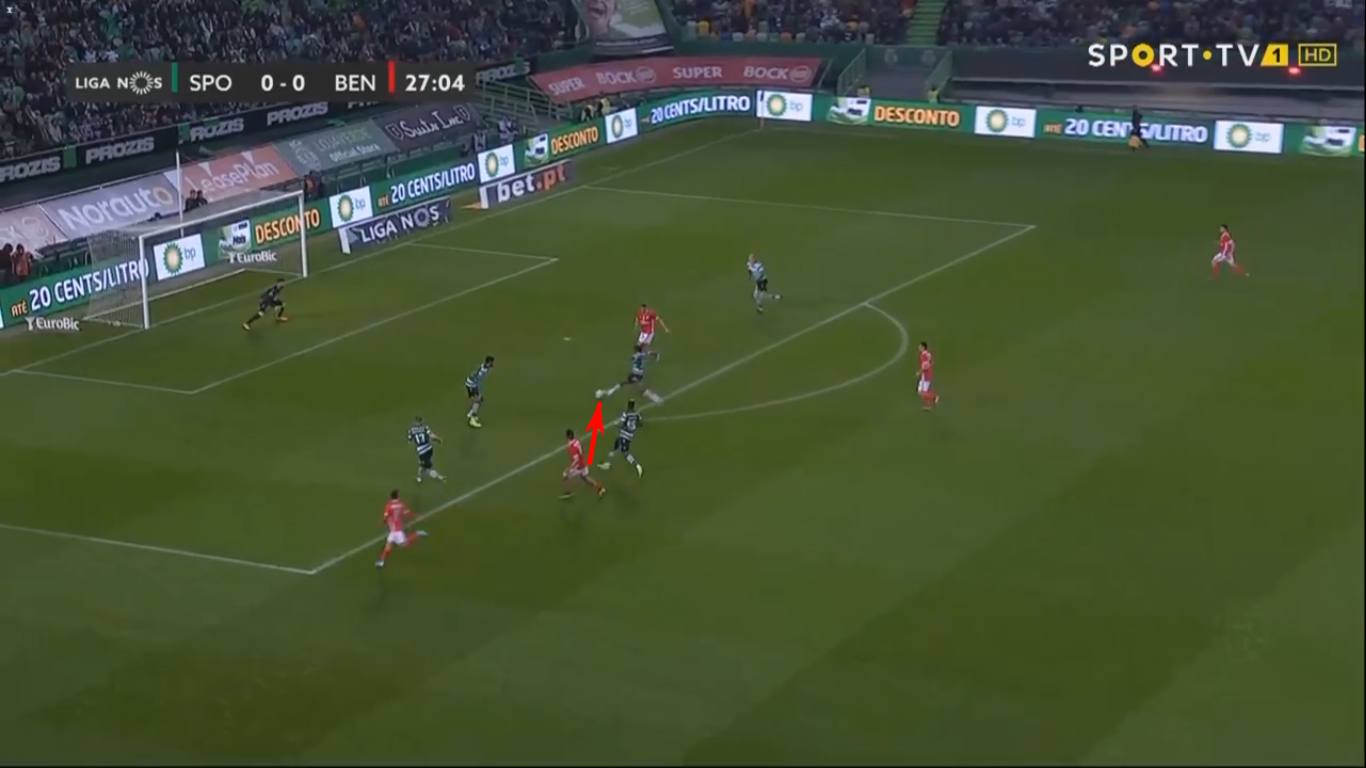 This time its Wendel making up for his previous mistake, bailing out Doumbia with a fantastic recovery run. He was able to cut out the pass to Vinícius, poking it free to his keeper and denying Benfica’s dangerous counterattack. 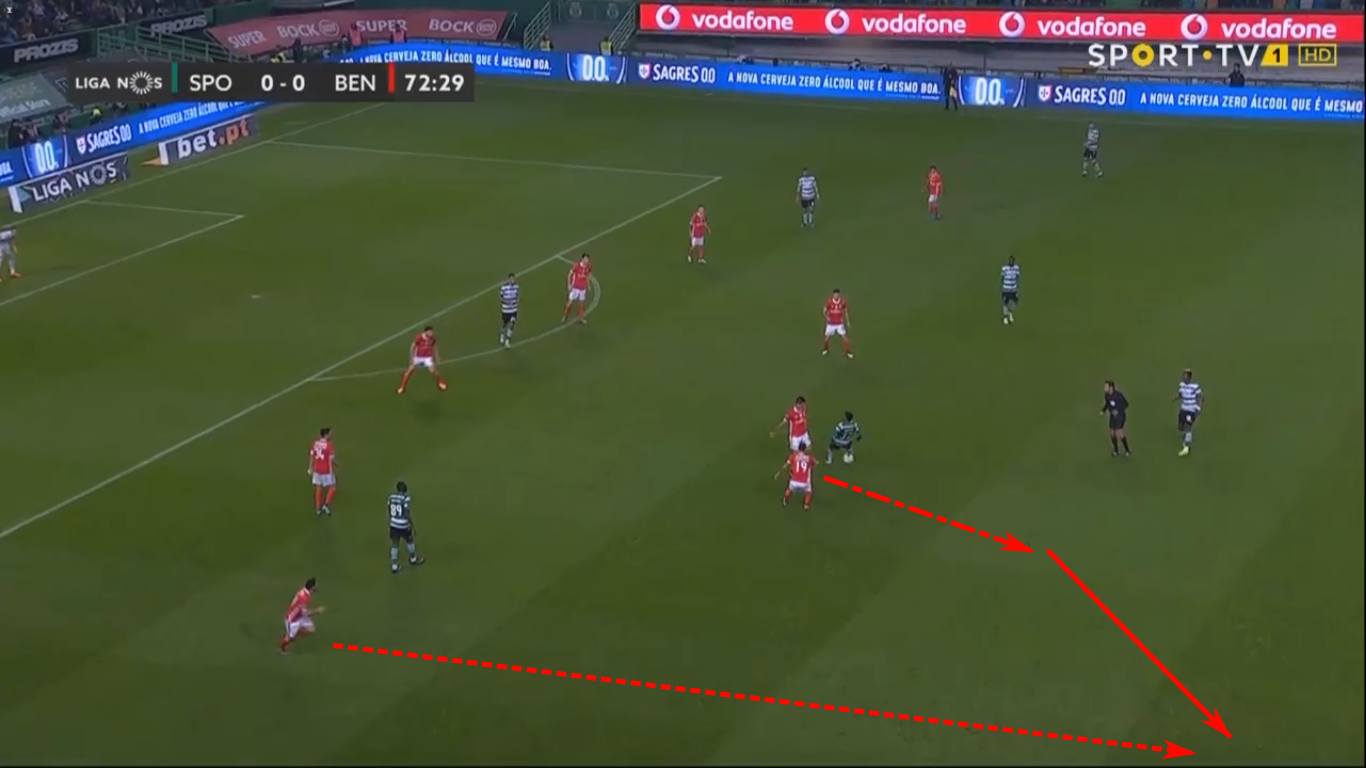 This scenario repeated as Sporting was pushing numbers forward in pursuit of a go-ahead goal. Wendel’s attempt to break down the defence resulted in a 1v2 loss on the dribble. Gabriel read the play brilliantly and stepped forward to make a perfectly-timed tackle. Sensing an opportunity for a counterattack, he played Pizzi into space. 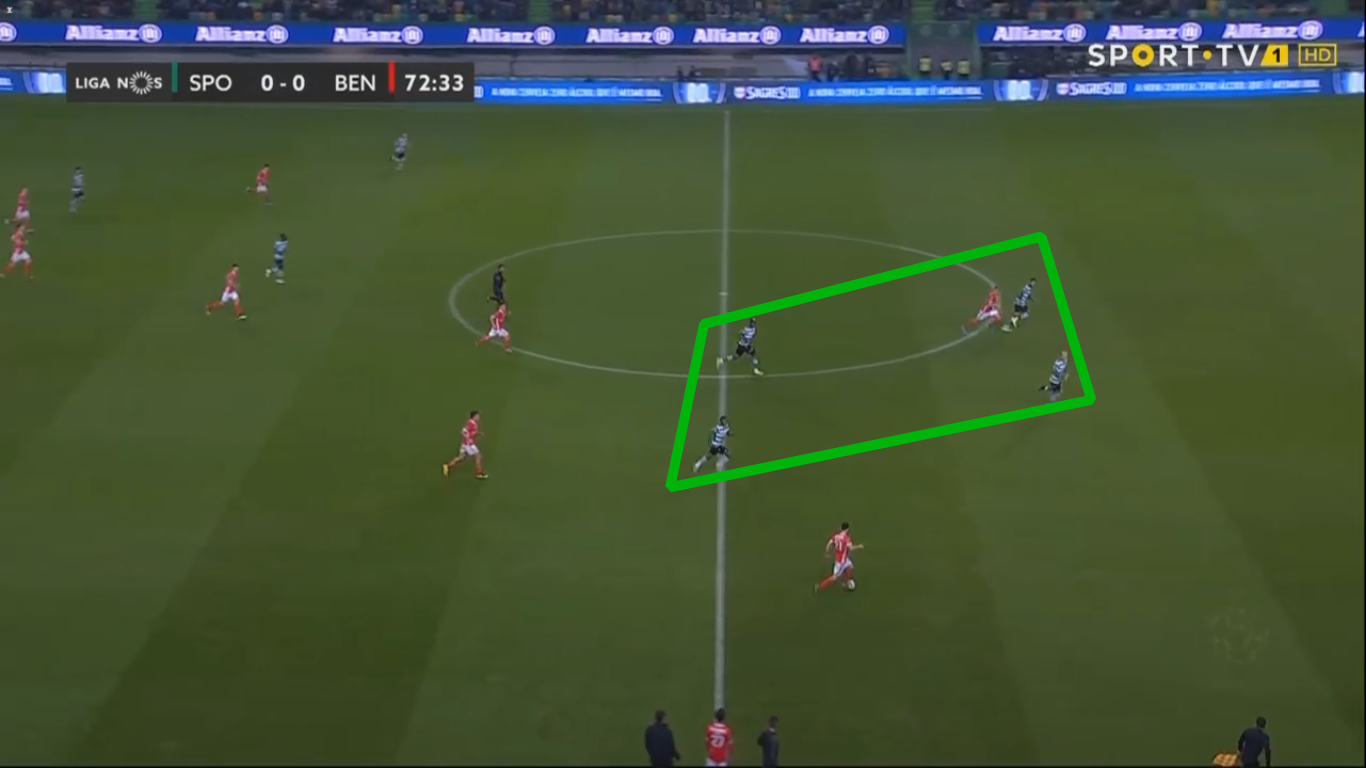 Fortunately for Sporting, momentum was in its favour, so Benfica had all but one player behind the ball. As Pizzi hastened down the pitch, Wendel made a great recovery run, catching the Portuguese and forcing him to slow the tempo of the attack. That delay allowed Ristovski to recover and join his centre-backs. The midfield and Acuña followed, forcing Benfica to abandon the counter and set up a positional attack that went nowhere.

Rafa’s introduction to the match was the turning point. Not only did he create and finish off plays, but his introduction saw Benfica push Pizzi and Cervi higher and narrower, funnelling the attack to the central channel. With the reds occupying the centre with four players, Sporting had to respond. Ristovski tended to play deeper and more centrally, but the home side still struggled to contain its opponent.

The runs of play that produced Cervi’s shot in the 76th minute and Rafa’s goal in the 80th looked more like Benfica challenging Sporting’s grit and determination than anything else. The middle was packed with players and deflections led to frantic defending against hopeful attacking. In the end, the change in tactics worked as Vinícius powered through the Sporting attack to create scoring opportunities. In all the chaos from the 75th minute to the final whistle, Sporting’s defensive breakdown gave Benfica a lead they would not relinquish. 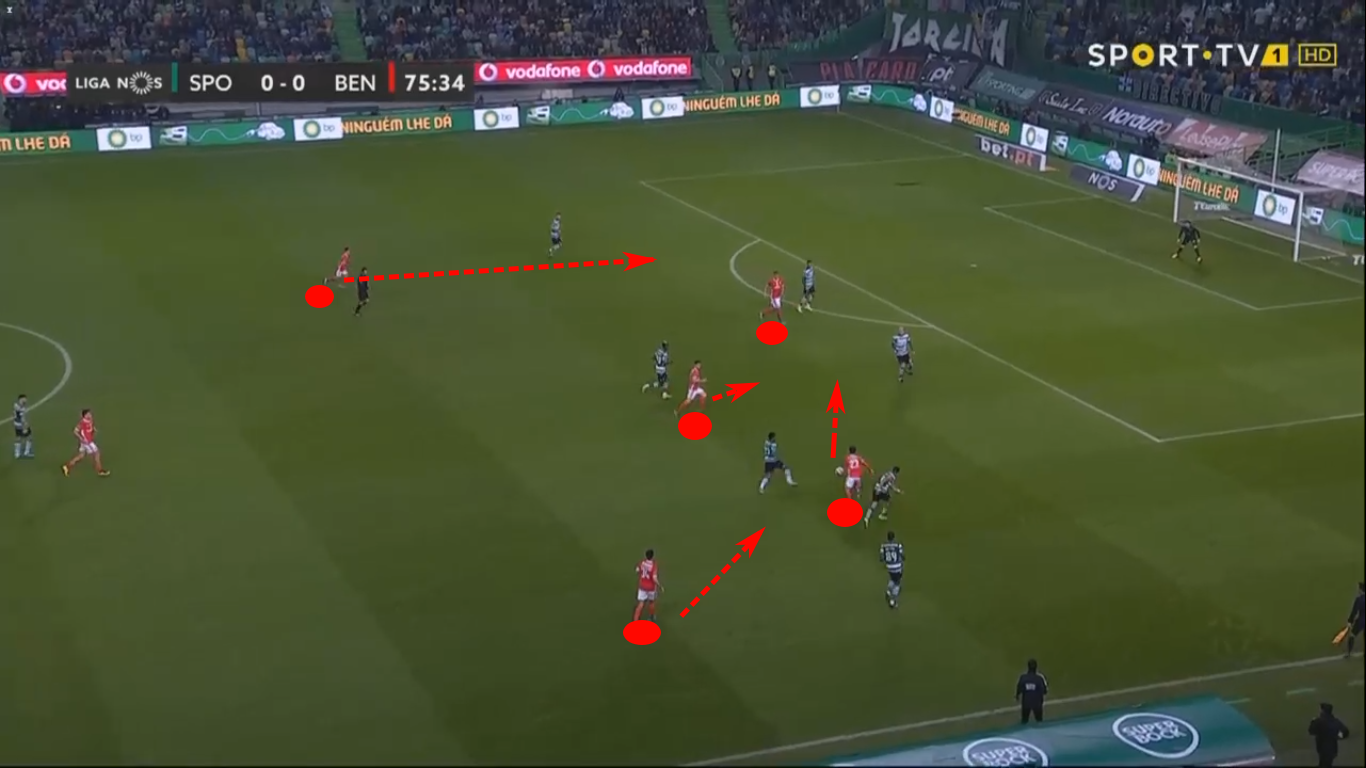 After a nice build-up, Pizzi hustled down the wing, cutting into the half-space to link up with his teammates. Notice the Benfica players streaking into the central channel of the box. 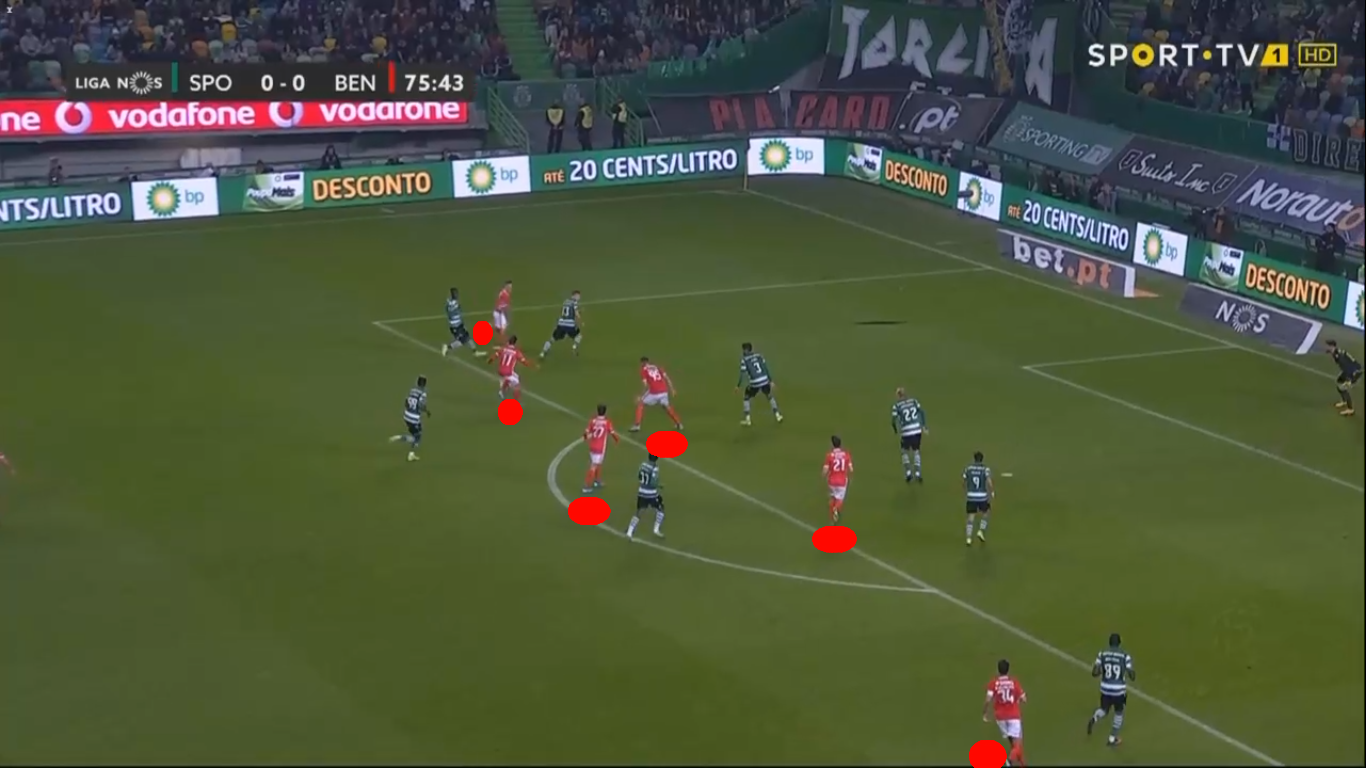 After a few poor touches, deflections and hurried passes, the ball arrived at Cervi’s feet at the top of the box. A little combination with Vinícius led to a Cervi shot, which was blocked. Though Benfica couldn’t direct the shot on goal, the change in tactics was obvious as they directed everyone central, looking to pounce on a Sporting mistake or lucky break. 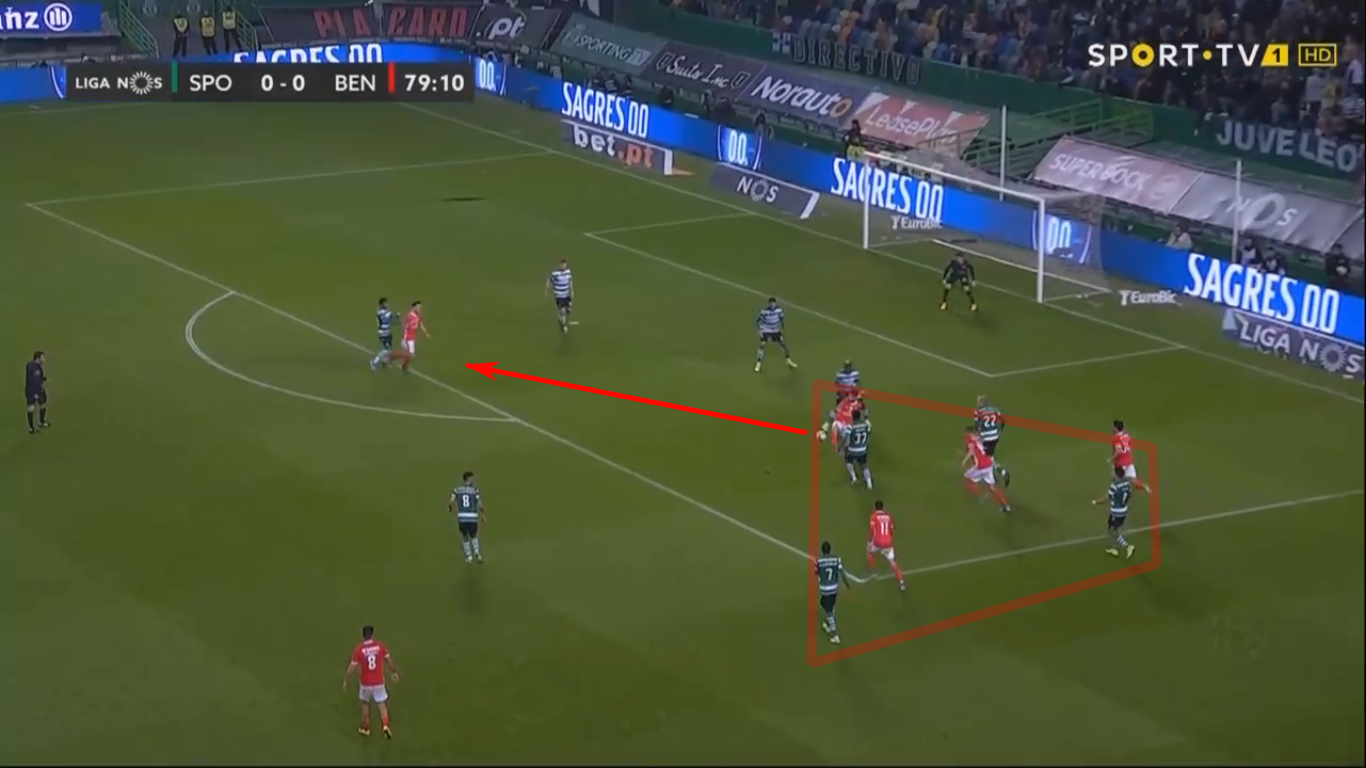 Then it happened. Following a throw-in, Vinícius played Rafa, whose smart flick found Pizzi. A poor touch travelled to Doumbia, but the Sporting defensive mid took a touch rather than clearing the ball. Everyone moved from the right-half space to the central channel, leading to a panicked situation. 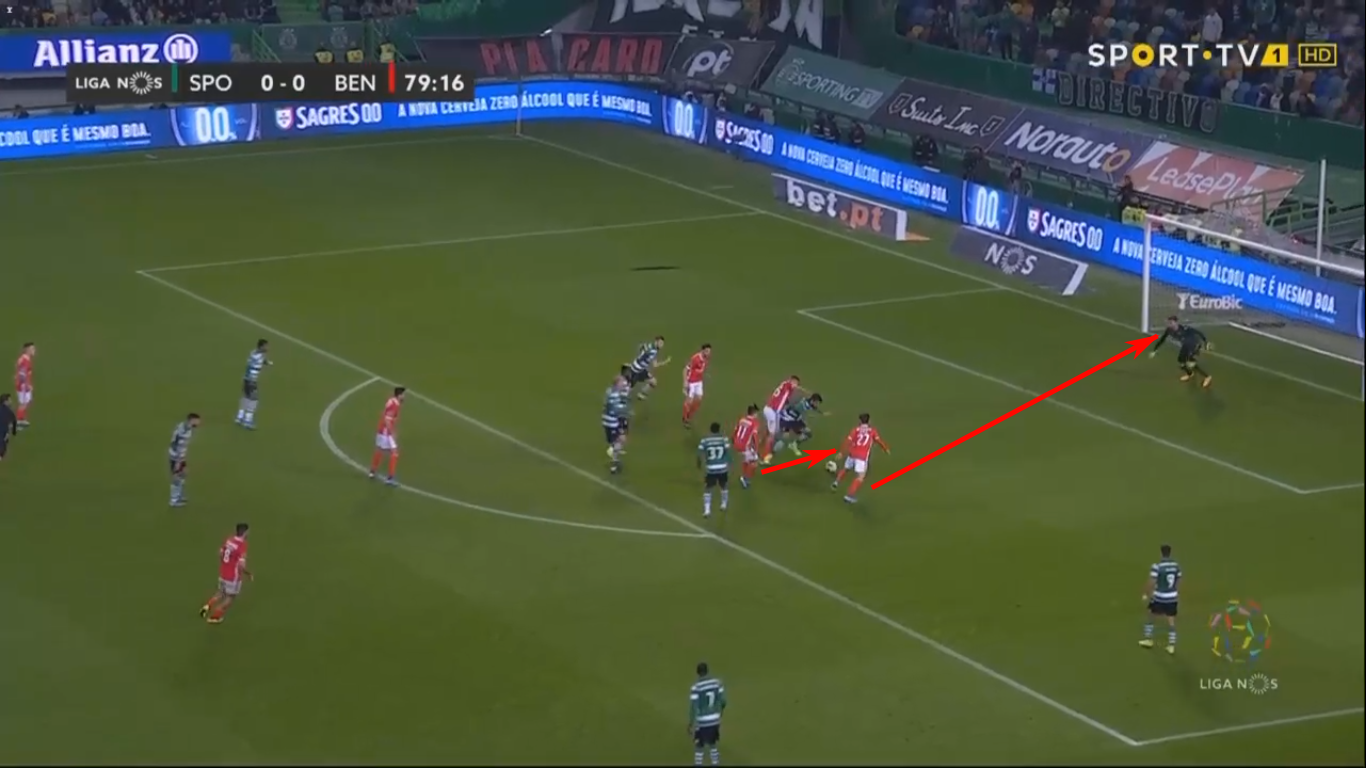 Vinícius picked up the loose ball and somehow managed to outmuscle both Doumbia and Mathieu, willing the ball past them. Ilori was all alone with three Benfica players as everyone moved towards Vinícius in hope of a tackle. When the big Brazilian broke free and pinned Ilori, a simple pass to Rafa produced the game-winner. It was an ugly sequence, but credit to Vinícius for having the strength and composure to break the line and Rafa for a calm, composed finish.

Benfica couldn’t have asked for a better Friday. In addition to the victory in the Debry de Lisboa, Braga managed to defeat second-place Porto in the other marquee match of the day. Benfica now holds a seven-point lead midway through the season. In the history of the Portuguese league, a lead of that size at this stage is decisive. Next on the docket are two games against relegation fighting clubs. That breather should benefit Benfica as they prepare for an extraordinarily difficult February.

For Sporting, if a home defeat against Porto wasn’t bad enough, it’ll now have the derby result hanging over its head, as well as the non-stop rumours of Fernandes’ seemingly imminent transfer to Manchester United. To make matters worse, Sporting has two trips to the “Quarry” in the next week and a half to play a difficult Braga side. While Sporting has played well of late, losses to its two fiercest rivals and sitting behind minnows Famalicão in the table are massive disappointments for the club and fans. Only results against Braga can right the ship.