Hertha Berlin: Can they attack the top of Bundesliga? – data analysis

It was a very tough last season for Hertha Berlin, that ended up on place 10 in Bundesliga. Three coaches, ups and downs and at the end, they nearly qualified for Europe. However, even if this was not the case at the end, Bruno Labbadia stabilized the team and he implemented a clear playing style for his team. If he would have been in charge for a longer time, Hertha might play in UEFA Champions League next season. However, this season, they want to attack the top of Bundesliga since investor Lars Windhorst gave the club a transfer budget of 150 million euros.

In this data analysis, we will take a closer look at Hertha BSC Berlin’s squad, their players´data and statistics. Furthermore, this analysis will provide you with Berlin´s playing style.

First of all, we will look at the squad structure and the width within the team. As you can see in the image below, Hertha BSC Berlin’s current squad list has 33 names. Seven of them are centre-backs and six are strikers. With five wingers, Hertha is able to rotate within the season. Adding to that, they have a balanced amount of full-backs. Also, they are able to choose between five central defensive midfielders and two more central midfielders for more advanced areas on the pitch. Regarding the fact, that Hertha will “only” participate in two competitions (Bundesliga and DFB-Pokal), lots of players are in the squad. This will be an advantage because other teams will have more matches in a tighter schedule but with a similar squad width. 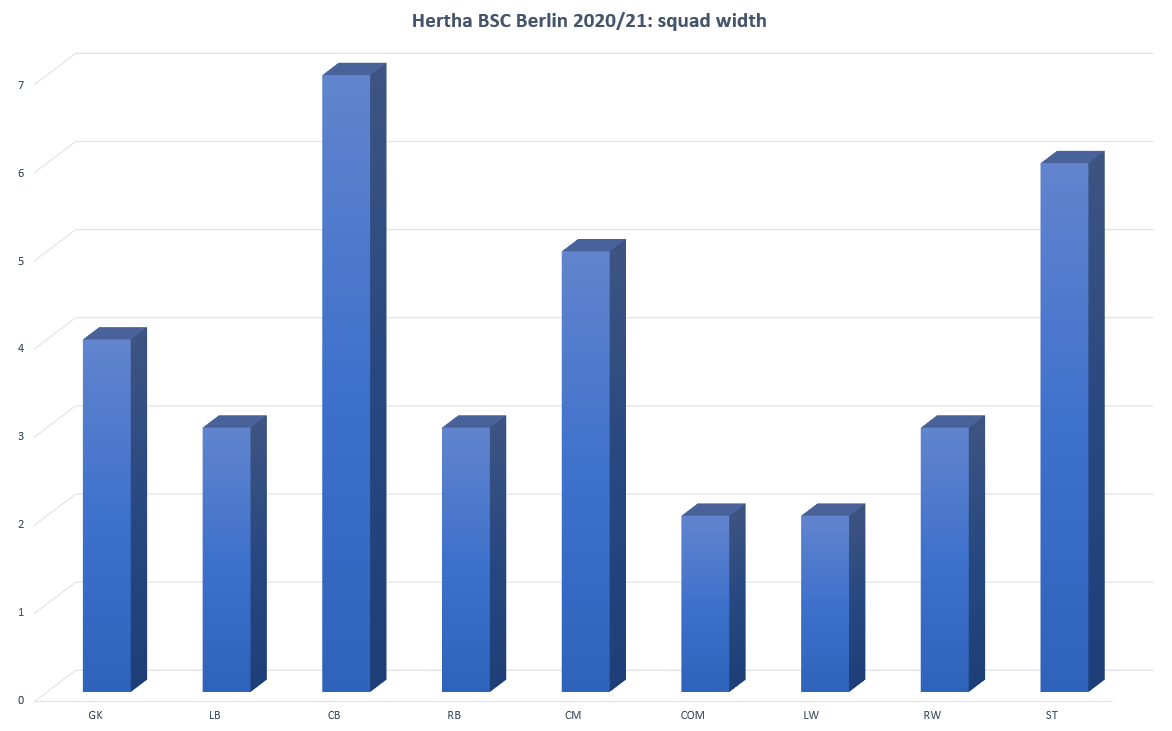 In the current squad, Hertha BSC have enough goalkeepers. With Alexander Schwolow, they could sign a very good and solid goalkeeper with Bundesliga experience from SC Freiburg. Regarding his age of 28, he is in the peak of his career and still able to improve. By taking a closer look at his statistics, he is average compared to the goalkeepers of the other top Bundesliga clubs. Adding to that, Berlin can build on Rune Jarstein who provides lots of experience with an age of 35. Furthermore, Labbadia has two talented young goalkeepers with the likes of Nils Körber (23) and Florian Palmowski (19) in the hindquarters. 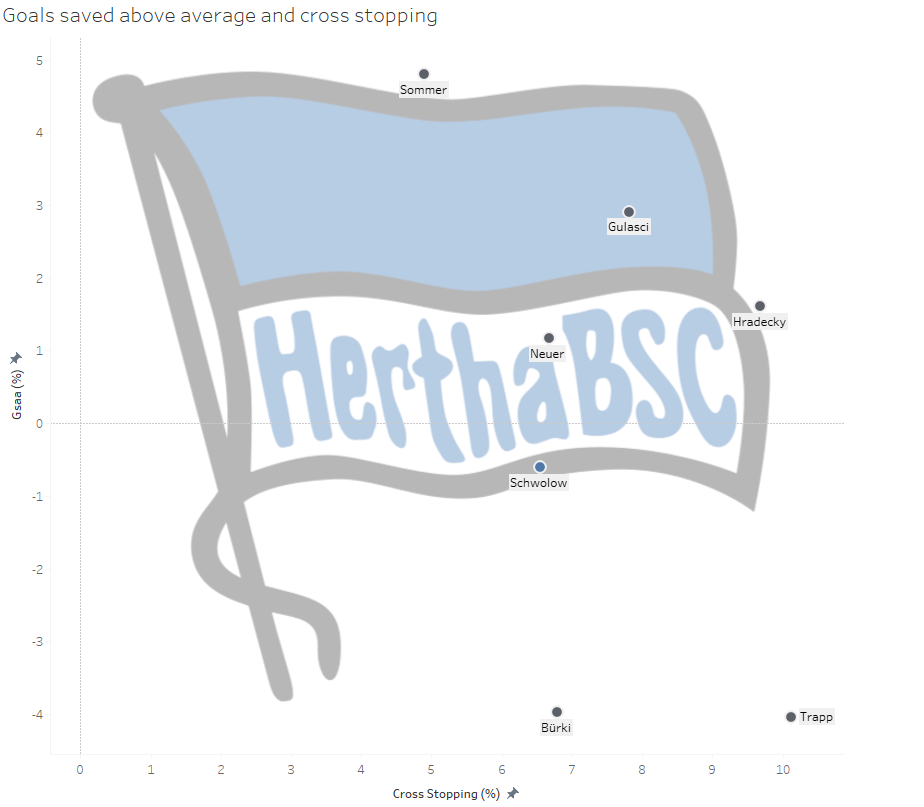 In central defence, Labbadia is spoilt for choice. Seven players can play this position and only he can line up only two of them. With Niklas Stark (25), Karim Rekik (25), Jordan Torunarigha (23) and Dedryck Boyata (29), they have four seasoned defenders. Last two played very well after the COVID-19 break and are expected to build the centre-back duo for next season again. While Boyata is an outstanding header, Torunarigha, Rekik and Stark a less than average compared to other top centre-backs in Bundesliga. Adding to that, Hertha have three promising talents in their own ranks who might get some playing minutes: Márton Dárdai (18), Omar Rekik (18) and Florian Baak (21). 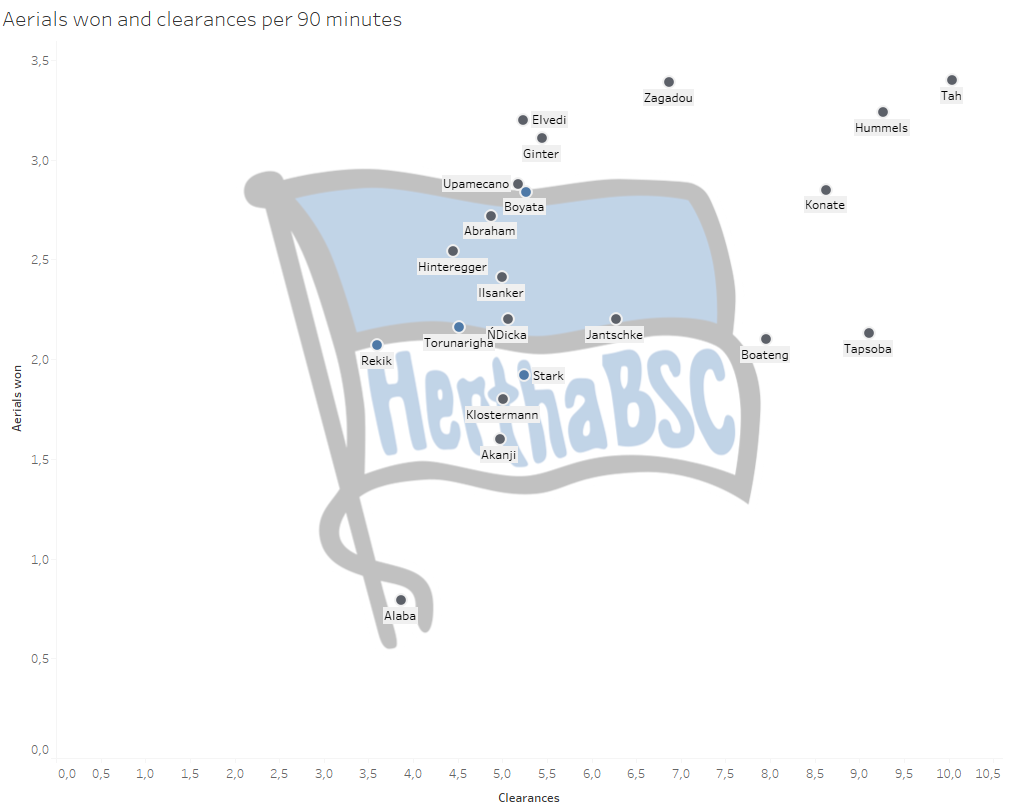 Hertha have three right-backs (Lukas Klünter, Deyovaisio Zeefuik and Peter Pekarik) and three left-backs (Maximilian Mittelstädt, Marvin Plattenhardt and Luca Netz) in their own ranks. While new signing Zeefuik from Groningen seems to get a place in the starting eleven, Mittelstädt and Plattenhardt will compete to get the spot on the other side of the pitch. Mittelstädt is a very good player for a high pressing whereas Plattenhardt convinces with technique and his outstanding touch in set-pieces. Regarding the statistics, Klünter and Pekarik will be helpful for rotating and Netz might get some playing minutes throughout the season as well. 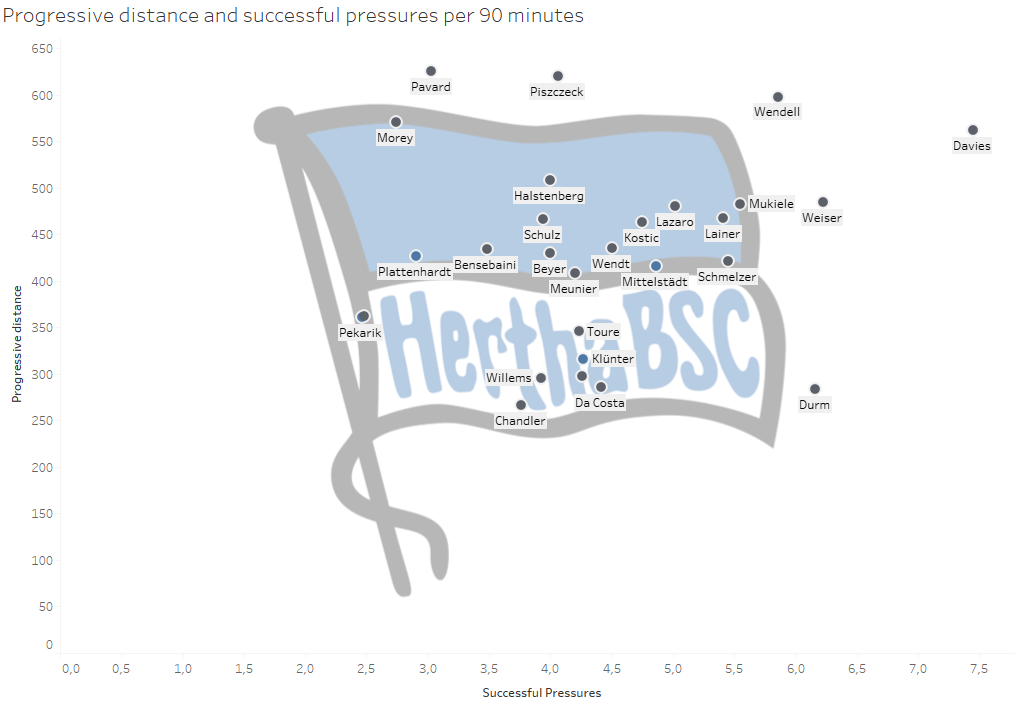 Hertha’s new star player Lucas Tousart plays in central midfield. The spot next to him in a very likely 4-2-3-1 formation might get one of the following players: Santiago Ascacibar, Arne Maier or Vladimir Darida. Darida played in a more advanced position on the pitch last season under Labbadia. Maier and Ascacibar were injured for a long time. After the departure of Marko Grujić (returned to Liverpool after loan), it will be a great competition between these two. Adding to that, talent Julian Albrecht (18) is able to play in this position as well. 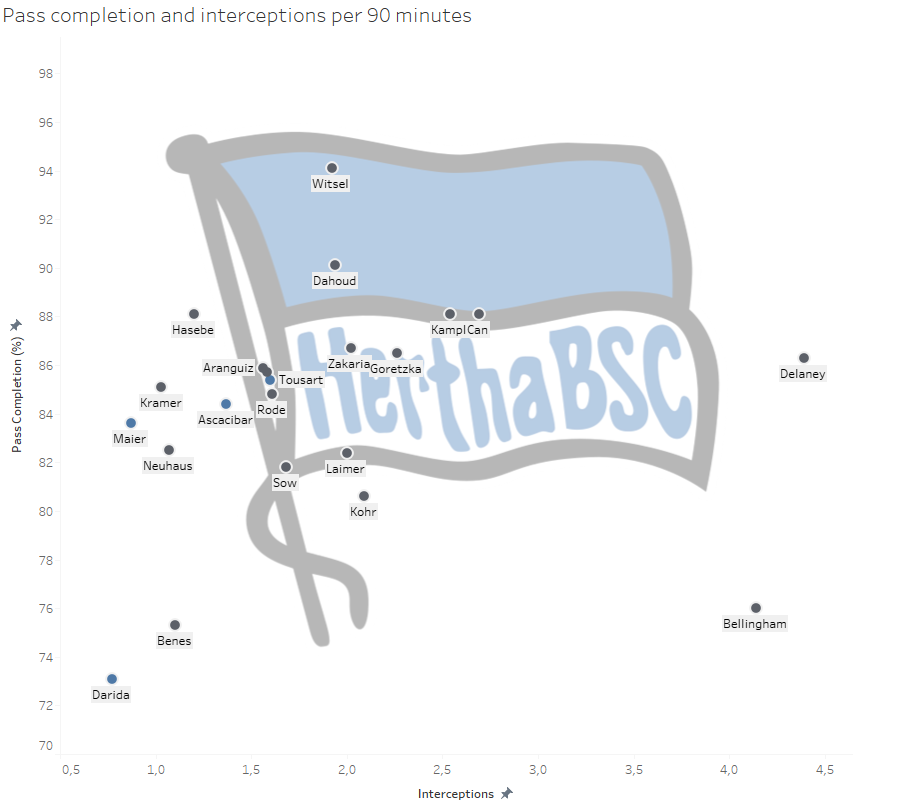 Lazar Samardzic (18) is one of the most promising German talents. Nevertheless, he might only get some playing minutes. With Ondrej Duda, a very smart player returns from his loan to Norwich. Adding to that, the Brazilian Matheus Cunha played an outstanding role under Labbadia and was the best player in the Hertha squad as he played as an offensive midfielder in the 4-2-3-1 formation. He will continue on this position very likely, as he is the most creative player in the squad providing 3,35 OP shot creations per 90 minutes. 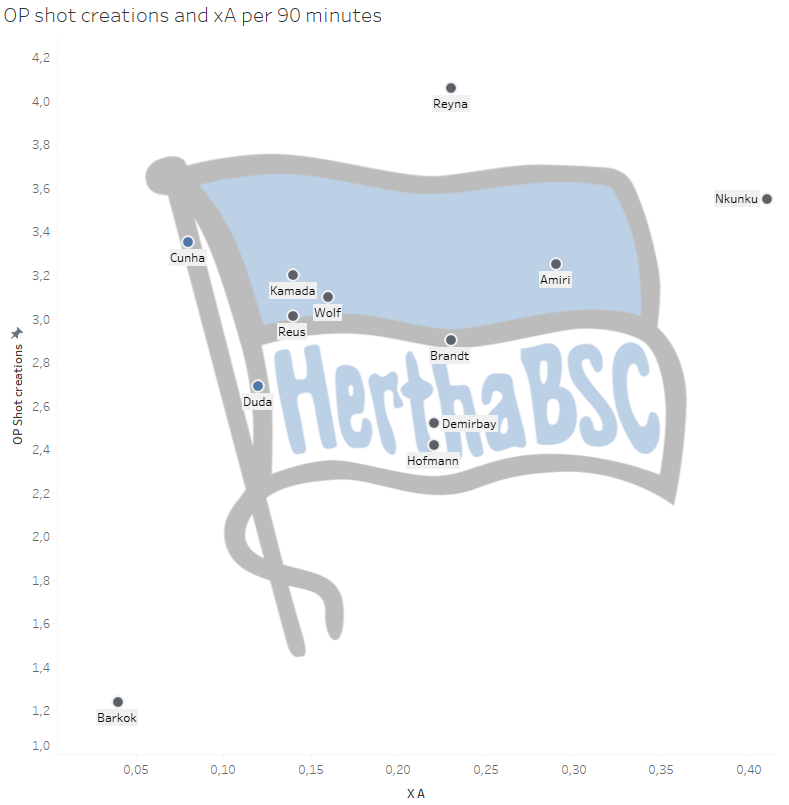 Two wingers for the left side (Javairô Dilrosun and Maurice Covic) and three for the right side (Dodi Lukebakio, Matthew Leckie and Palko Dárdai) should be enough for two competitions in one season. Lukebakio and Dilrosun will get the spots in the starting eleven whereas Leckie, Dárdai and Covic are solid alternatives. Especially Lukebakio played a good season (7 goals and 8 assists). With Cunha, Jessic Ngankam and Daishawn Redan, three technical gifted forwards can play on the wings as well. 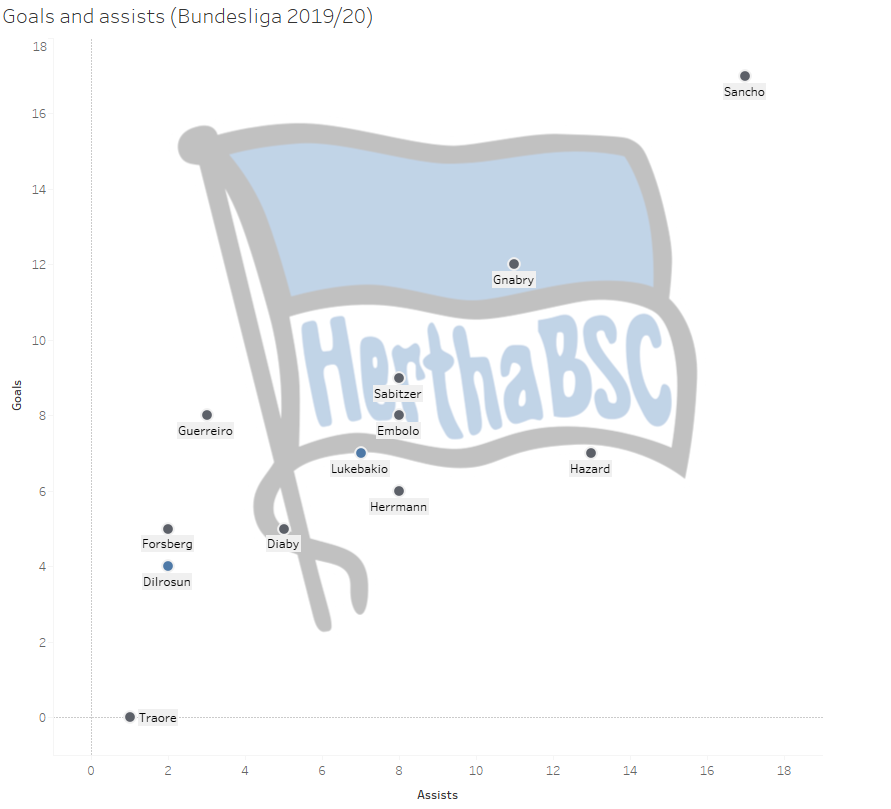 Again, Labbadia will have lots of options in the forward position. Playing in a 4-2-3-1, he will only be able to let one of six strikers play. While Cunha is very likely to play as an offensive midfielder, Krzysztof Piatek, Paskal Köpke, Muhammed Kiprit, Ngankam and Redan will fight for the spot in front of the midfield. Of course, Piatek is the most well-known player on the list. However, his performances since his arrival in Berlin were not good enough. Adding to that, Hertha got back very promising talent Redan who was loaned to Groningen. Nevertheless, with Piatek´s current form and Cunha playing as number 10, Hertha does not have a top striker in their squad. 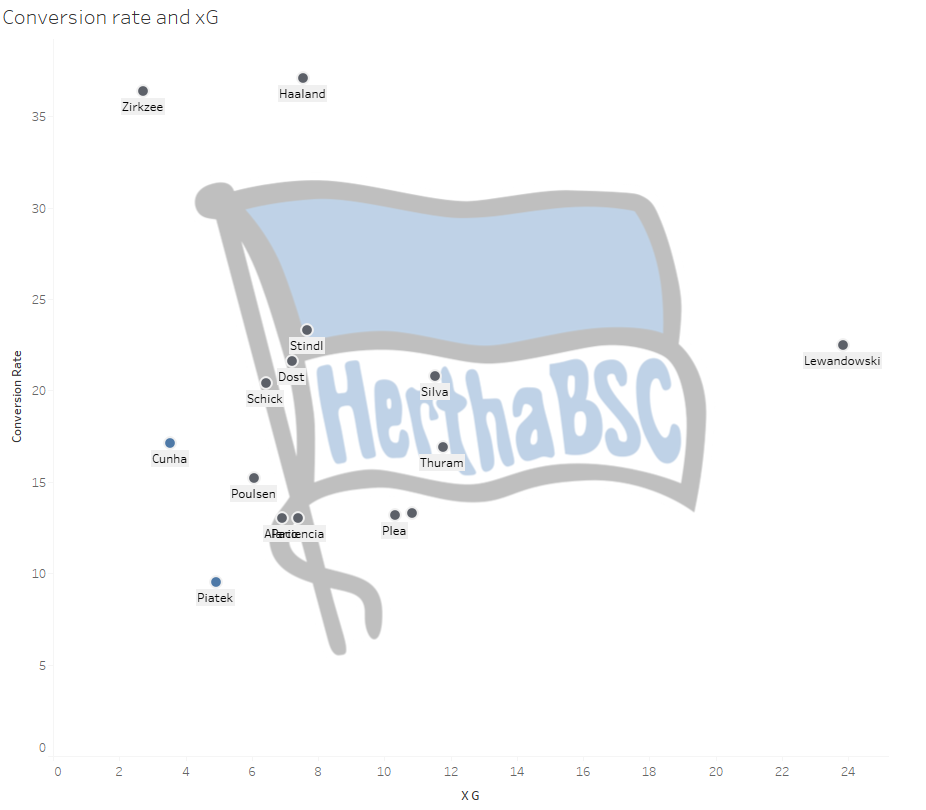 As already mentioned, Labbadia lined up his team in a 4-2-3-1 formation last season. This might be the case next season again if Piatek will perform better again. 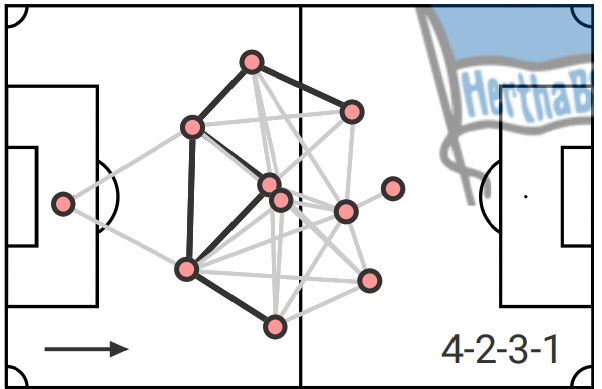 If not, Labbadia could use his favourite formation 4-3-3 with Cunha playing as a false 9 similar as Brazilian Roberto Firmino does at Liverpool. Lukebakio and Dilrosun have enough speed to play as wingers in a 4-3-3 with Tousart, Darida, Ascacibar and Maier, Hertha have quite good players for a three-man central midfield.

It is outstanding, how many promising talents will be in Hertha’s squad next season as they will have a very young squad with an average age of 23,17. This might be a risk. On the other hand, the squad width is very big and that will be Hertha’s biggest advantage. With lots of money, they still can get players to improve the squad. If this does not happen in the summer transfer window, they can still do that in winter. All in all, Hertha is in a good way and with one or two transfers, they will be ready to qualify for Europe.