After the Bundesliga restart, we have seen some surprises. And Hertha Berlin’s latest performances definitely are amongst the most extreme upward trends in the Bundesliga. With a new manager, they won three of their four Bundesliga matches after the restart and had a draw against RB Leipzig. This means they earned 10 points out of possible 12 points.

In the following tactical analysis, we take a closer look at Bruno Labbadia‘s philosophy and the tactics he deployed at Hertha Berlin so far.

In the first four games under their new manager, Berlin enjoyed more possession. Except from their game against RB Leipzig (47.51%), they had a possession rate above 50% (50.41% vs Augsburg; 58.33% vs Union Berlin; 51.71% vs Hoffenheim). But the sample rate is way too low to draw any conclusion from that and the more important question is how Berlin utilised their ball possession.

Under Labbadia, Hertha will not always play the ball forward if being pressed. Instead, they will look for opportunities to switch play and therewith penetrate the opposition defence in areas where there is more space offered. This can be proven by the increase of lateral passes since Labbadia took over. In the last four games they played 179.25 lateral passes per game compared to 157.15 lateral passes on average before Labbadia took over although the overall number of passes did not change significantly.

As expected, Labbadia deploys a positional play similar to his approach at Wolfsburg. But whereas Labbadia deployed a 4-3-3 at Wolfsburg most of the times, at Berlin he utilised a 4-2-3-1 formation in the three most recent games while deploying a 4-4-2 in his first match against Hoffenheim.

As one can see in the graphic above, Liverpool loanee Marko Grujić (#15) will often play in central midfield pairing up with Per Skjelbred (#3). This double pivot is supposed to ensure the required balance during the attacking phase. They either stay at the back to cover the attack or push forward and support up front. The wingers rather occupy the half-spaces with the full-backs moving up the flanks.

The idea behind positional play is that each player occupies a certain area of the pitch. By occupying the position and moving within the allocated area, it is ensured that all channels are occupied and passing lanes will automatically be created. Also, a superiority behind opposition lines can be created which enables to break lines and progress up the pitch cleanly.

By providing a wide structure, like displayed in the image above, the opposition lines are stretched and gaps open up. And if the opposition creates a numerical superiority near the ball, there are players on the far side ready to receive and attack.

But the players can also interchange positions. However, in contrast to the concept of overloads, during positional play, all positions remain occupied. In a specific case, Labbadia likes his central midfielders to move into wider areas. As a consequence, the full-backs can push higher up the pitch. As the winger will tuck inside, all channels of the pitch are occupied again even though the central midfielder moved out wide.

The full-backs are key to Berlin’s new attacking tactics. “We should move far up the pitch if possible. That way I also get more crossing and shooting opportunities”, right-back Peter Pekarík said about his tasks under Labbadia.

Moreover, their organised structure in possession allows for counter-pressing. Due to their positional play, they can press the ball-carrier from all sides after losing the ball. Furthermore, they have the required cover at the back since the players stay in their positions during possession. And they will always be ready for a transition in case of a loss of the ball.

When we take a look at what has changed under Bruno Labbadia so far and examine the stats, it becomes clear that there was a change in terms of the defending tactics. Since Labbadia took over, there has been a decrease in both the PPDA value and the number of xGA per game. While the average PPDA value saw a significant drop from 12.55 to 7.83 under the new head coach, Berlin’s xGA value decreased from 1.32 to 1.06. Against Union Berlin, they even allowed only 0.07 xGA.

But what does that exactly mean?

To keep it simple, Berlin have been pressing with a higher intensity under Labbadia which can be seen in the lower value of passes allowed per defensive action (=PPDA). Moreover, the number of expected goals against (xGA) has seen a decrease lately. Their drop in the xGA value underlines Berlin’s newly gained defensive stability. How exactly this was done and how both values are connected will be explained in the following part of our analysis.

The pressing tactics behind the defensive stats

In the following, we examine their defensive approach and therewith explain how Labbadia’s tactics made an impact on Berlin’s stats.

It is not a coincidence that their PPDA value decreased under new boss Labbadia. Their defensive approach revolves around actively pressing the opposition, often even within the opposition half. Depending on the opponent, Berlin will either guide the opposition build-up into the centre or towards the flanks.

They use simple yet effective pressing triggers and from then on lure the opposition into certain areas where they aim at winning the ball. Against Augsburg, for instance, they used square passes between the centre-backs as a trigger for their press. Then, their winger cut off the passing lane to the full-back using his cover shadow. That way, Labbadia’s team forced Augsburg to play inside. Meanwhile, Hertha’s midfielders moved forward and closer to their opponents. When Augsburg played the ball to either of the central midfielders, Berlin’s midfielder pressed from the blind-side in order to regain possession.

Against the centrally focused RB Leipzig, however, Berlin looked to prevent Leipzig from playing passes into their double pivot. Labbadia’s side managed this through a compact shape and the use of cover-shadows. In order to ensure vertical compactness, they did not press from the front but set up a mid-block. Below, we can see them using a 4-4-2 shape and Vladimír Darida screens the passing lane to Leipzig’s midfielder Marcel Sabitzer. Therefore, RB Leipzig cannot play their preferred build-up pattern by playing into one of their central midfielders.

With their pressing approach, Hertha Berlin did not only decrease their PPDA value but also kept the opposition away from their goal more often. And as a result, once can state that Berlin under Labbadia are much harder to break.

All in all, as our analysis showed, Labbadia’s blueprint is already notable at Hertha Berlin. Besides an improved positional play that allows Berlin to create chances with their high attacking full-backs, they also regained defensive stability. With a higher pressing intensity, they already disturb the opposition during build-up and therewith nip many opposition attacks in the bud. This has been vital for them as they concede less high-quality chances and therewith increase their chances of winning games.

We will see whether their rise in the Bundesliga also continues in their next game against Borussia Dortmund. 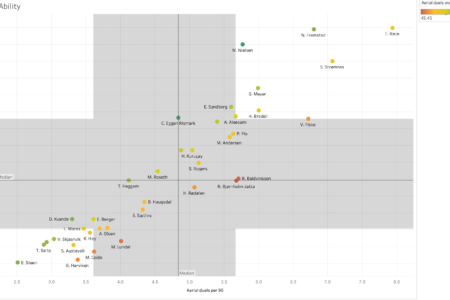 In this data analysis piece, we will be looking out for the best centre-backs currently playing in OBOS-ligaen using statistics. Centre–backs […]