Yokohama F. Marinos are back. The reigning champions had an abysmal start to the season winning just three out of the first ten J1 League matches. Since then, the Marinos have turned it around winning all the three games. The last win came against Consadole Sapporo in their home day before yesterday.

The home team dominated Consadole throughout the match. The xG dynamics is a testament to that.

The first half entirely belonged to the Marinos. Consa tried to come back in the second half but to no success.

In this tactical analysis, we will delve upon the tactics and intricacies of both the gaffers. This analysis will also discuss the fact that it was more of a Consadole loss than a Marinos win.

Angelos Postecoglou sprung no surprises as he stuck to his preferred 4-2-3-1 formation and made numerous changes in the midweek fixture as everyone expected. Il-Kyu Park positioned himself between the sticks. Ryo Takano and Ken Matsubara positioned themselves on either side of Thiago Martins and Shinnosuke Hatanaka in defence. Takahiro and Takuya Wada manned the midfield. Daizen Maeda, Marcos Júnior, Eitaro Matsuda, and Júnior Santos (on loan from Kashiwa Reysol) completed the line-up. 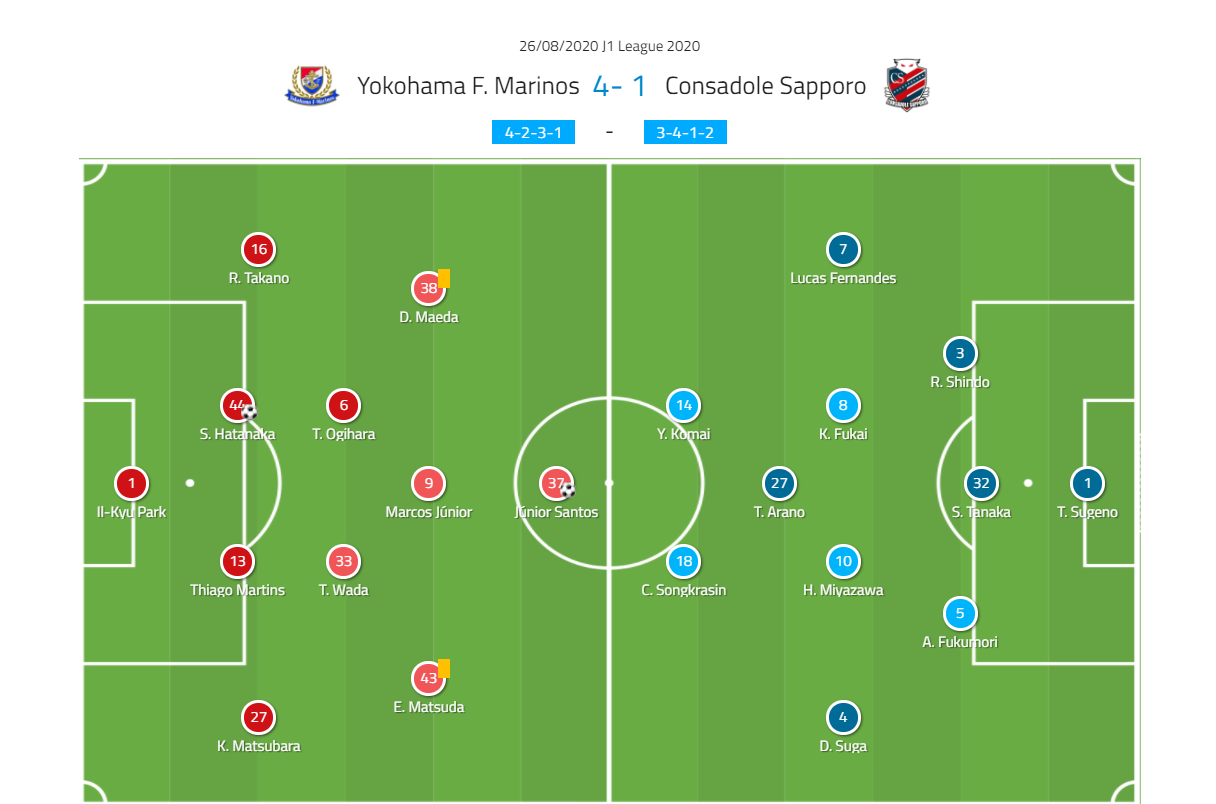 Michael Petrović went with the same line-up and formation (3-4-1-2) against Yokohama F. Marinos from the weekend game against Oita Trinita.

Consadole press and the Marinos build-up

Out of possession, Consadole opted to go for strict man-marking, in the opposition half. Each player had his man covered and pressed the Marinos as high as possible relative to the position of opposition players. 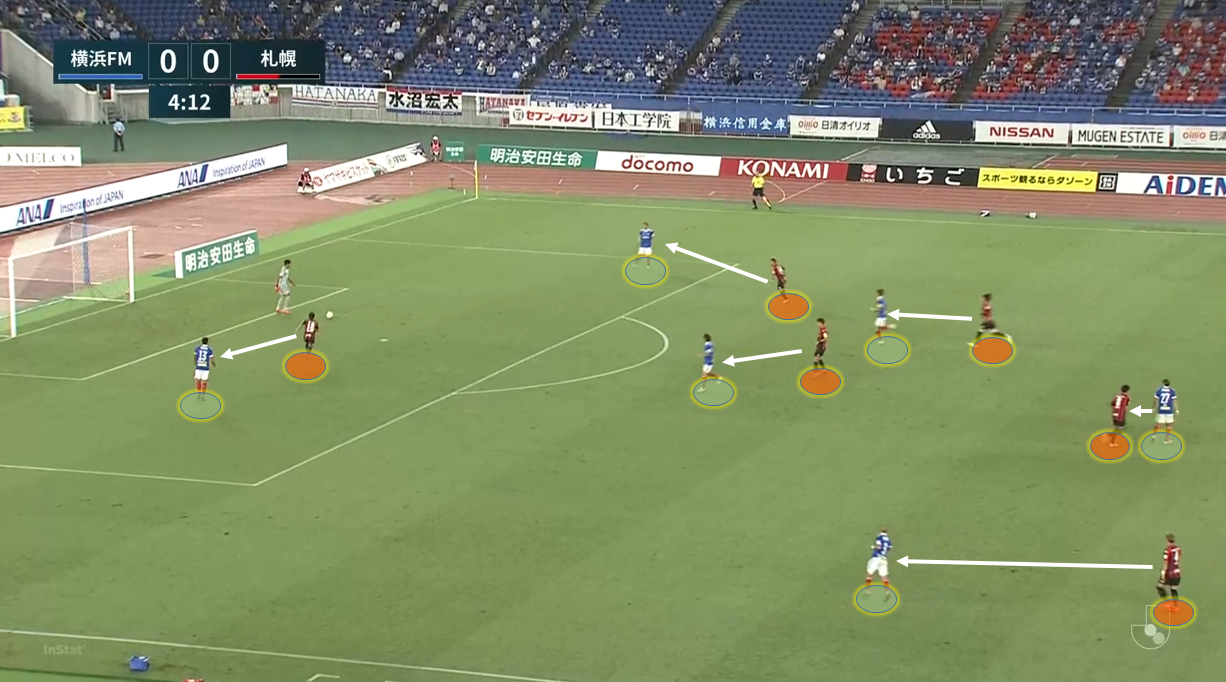 The Marinos tried to lure in the opposition players as deep as possible and then played a long ball towards their attacking players. A long ball from the goalkeeper is not generally Marinos’ build-up method but Consa forced them to do so. However, most of the time the home team were successful in doing that. Il-Kyu Park (GK) played ten long balls with 50% accuracy in this match whereas his average for the season being five long balls with an accuracy of 45.5%. 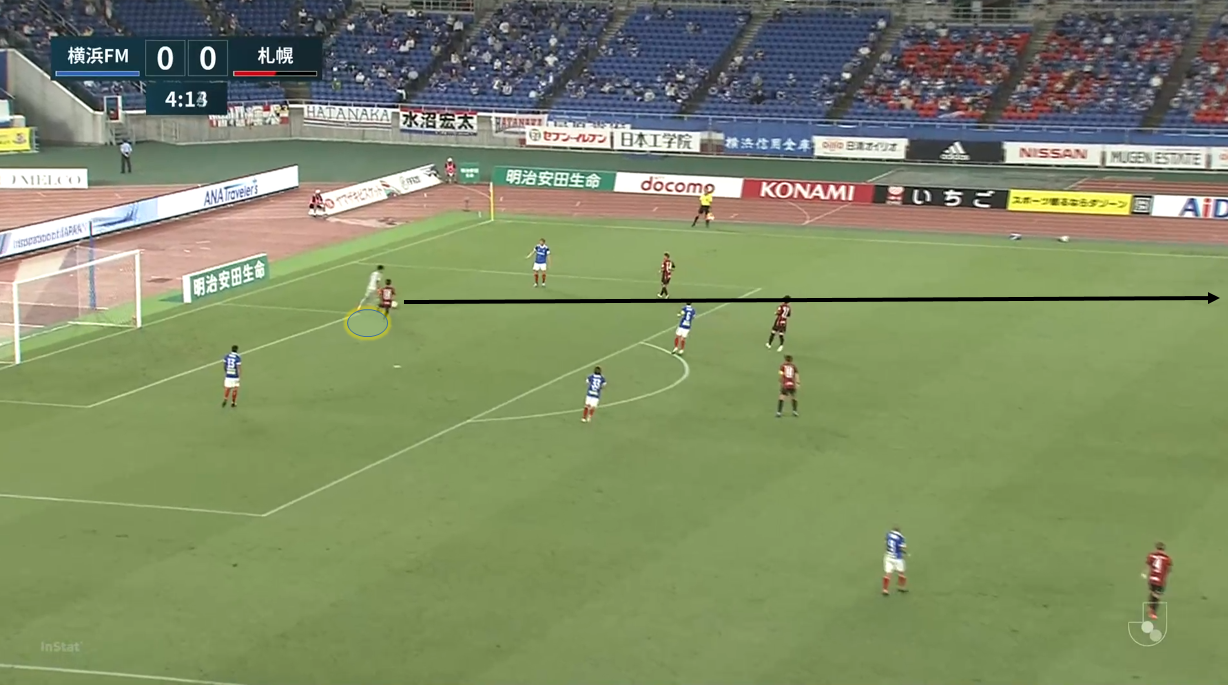 Here, as you can see the goalkeeper waits for him to be pressed to create a separation between Consadole’s first line of press and other players. Once that happens, he plays a long ball to Júnior Santos. 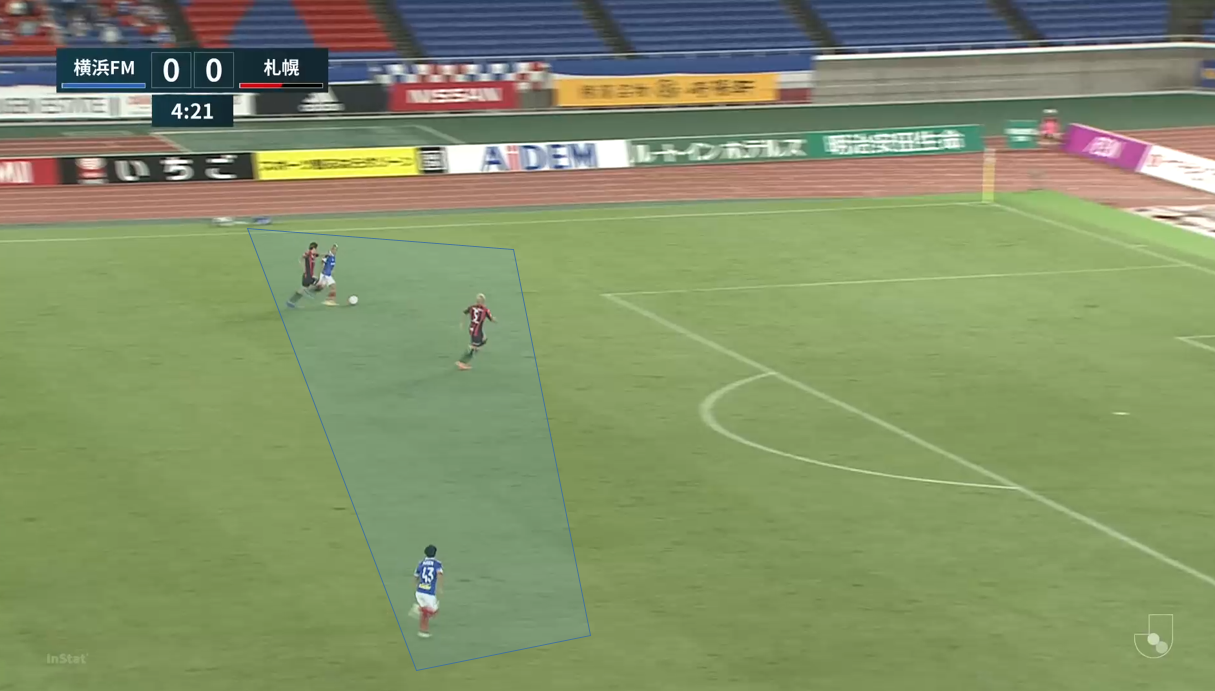 Júnior Santos wins the aerial duel and a 2 v 2 situation is created. Unfortunately, for the Marinos, they could not score from this situation.

In spite of Consa’s high and strict man-marking, they had a high PPDA (Passes Allowed Per Defensive Action) of 16.63, which was due to the fact, on occasions, they were late in arriving to the situation and thus did not perform any defensive action high up the field. 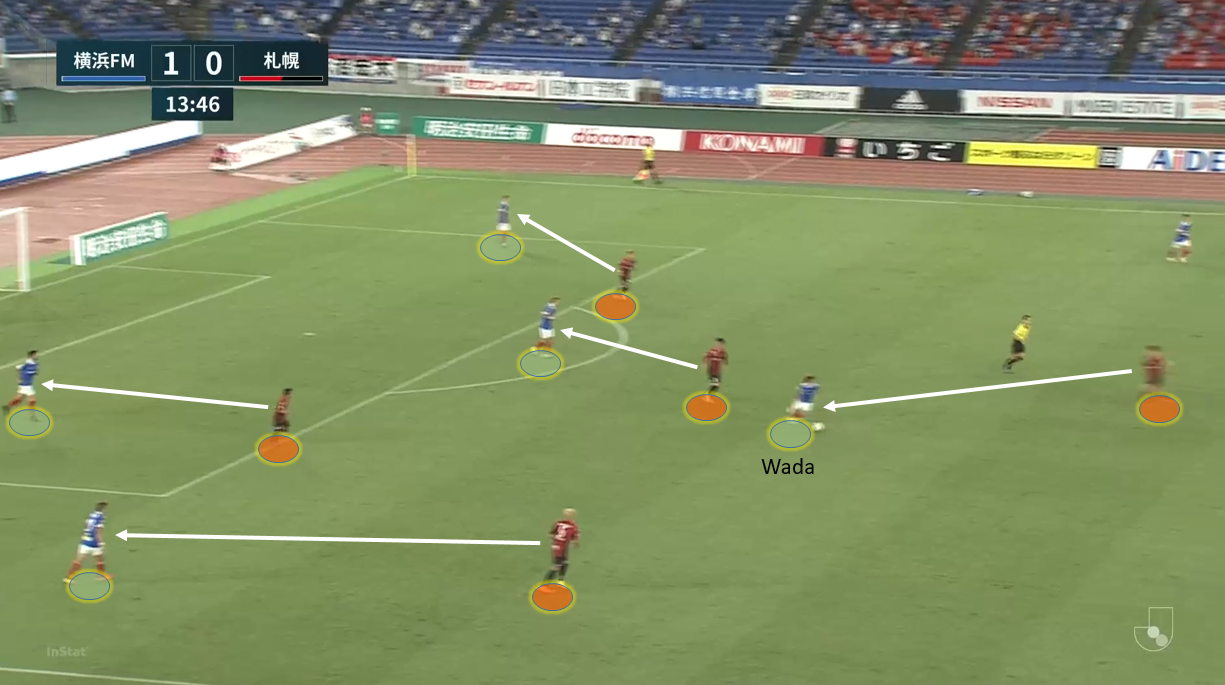 Here, Wada had the time to receive and turn, and still, the person who should be man-marking the Marinos midfielder is far away. These type of scenarios in man-marking is a recipe for disaster.

In their own half, Consa did not go for strict-marking, rather formed a five-man backline and the attackers and midfielders tried to match the opposition in numbers near to the ball-carrier. 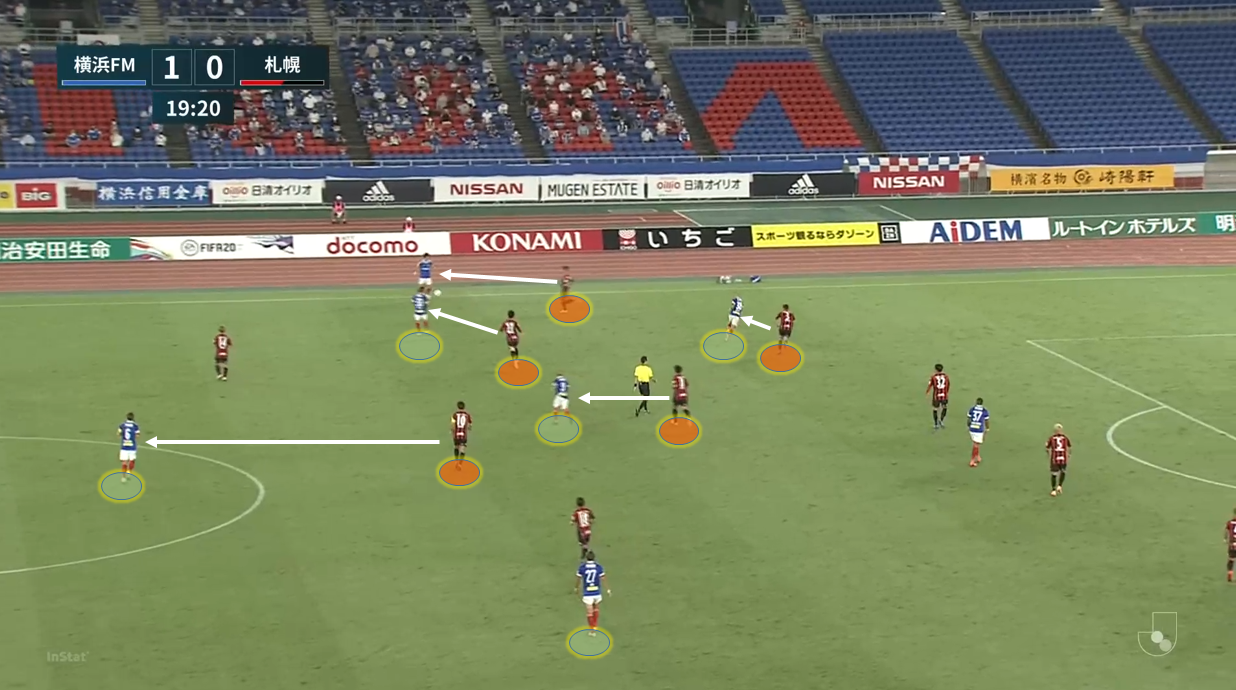 Here, Hatanaka (LCB) passes the ball to Takano (LB). As soon as Takano receives the ball, the right wing-back of Conadole presses him and his teammates nearby are marked by the opposition players.

The pass and move concept sounds simple. It’s simple too but highly effective when executed properly.

Yokohama F. Marinos is a master in this art. The other teams looked to have found a tactic to match them in the first few games but the Marinos have found their mojo back in the recent games.

In the scenario below, Consadole strictly man-marked the home team and pushed the home team to the flanks. Akito Fukumori (LCB) leaves his marked player to press the goalkeeper, that is why you could see a Marinos player not being marked. 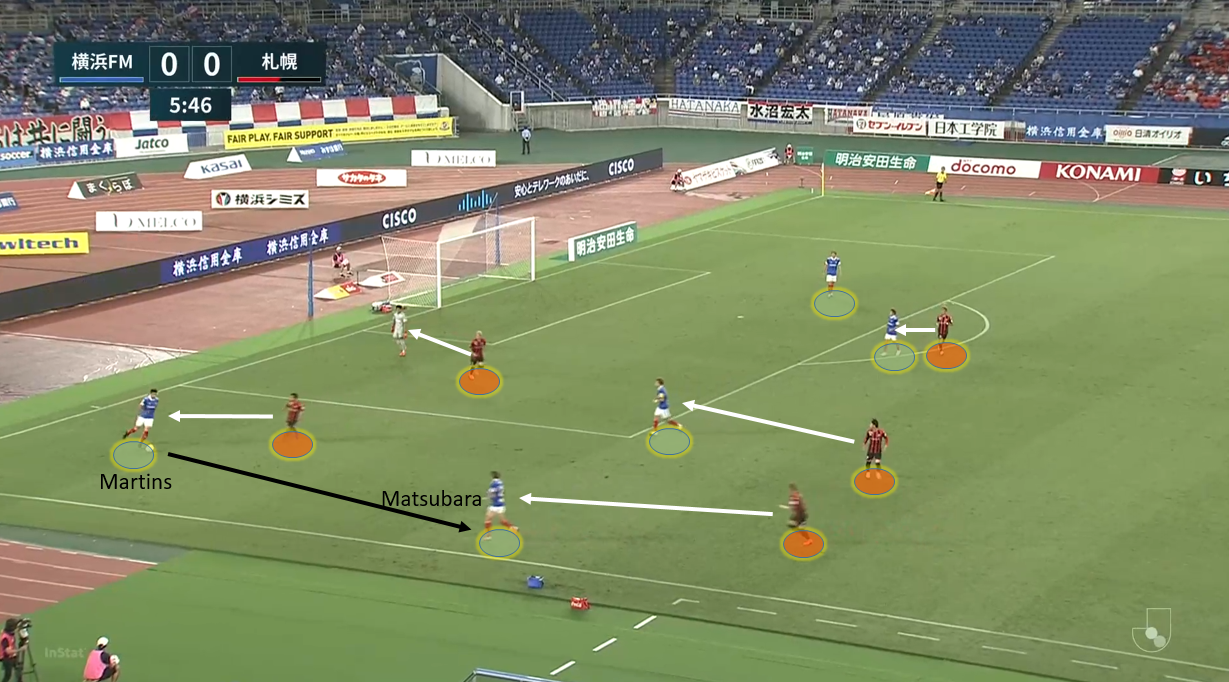 In the image above, Martins passes the ball to Matsubara and continues his run past his marker. 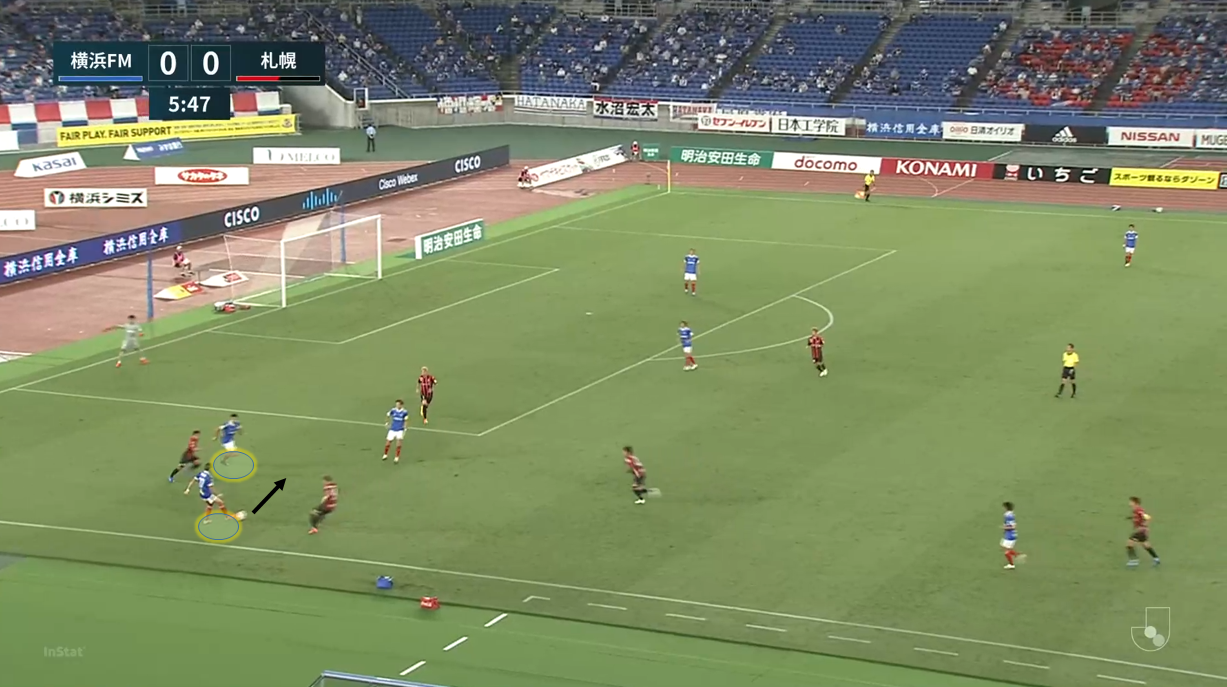 The right-back lays it back to Martins and the Brazilian dribbles the ball past three players and creates a 6 v 5 situation. Unfortunately, for Marinos, it did not result in a goal.

The same pass and move in the opposition half led to Marinos’ opener.

Yokohama F. Marinos are known to create diamond on the flanks in the opposition half and rotates within the diamond to dismantle the opposition. An amalgamation of the diamond, rotation, 3rd man principle, dummies, and pass and move resulted in the opener for the Yokohama based side. 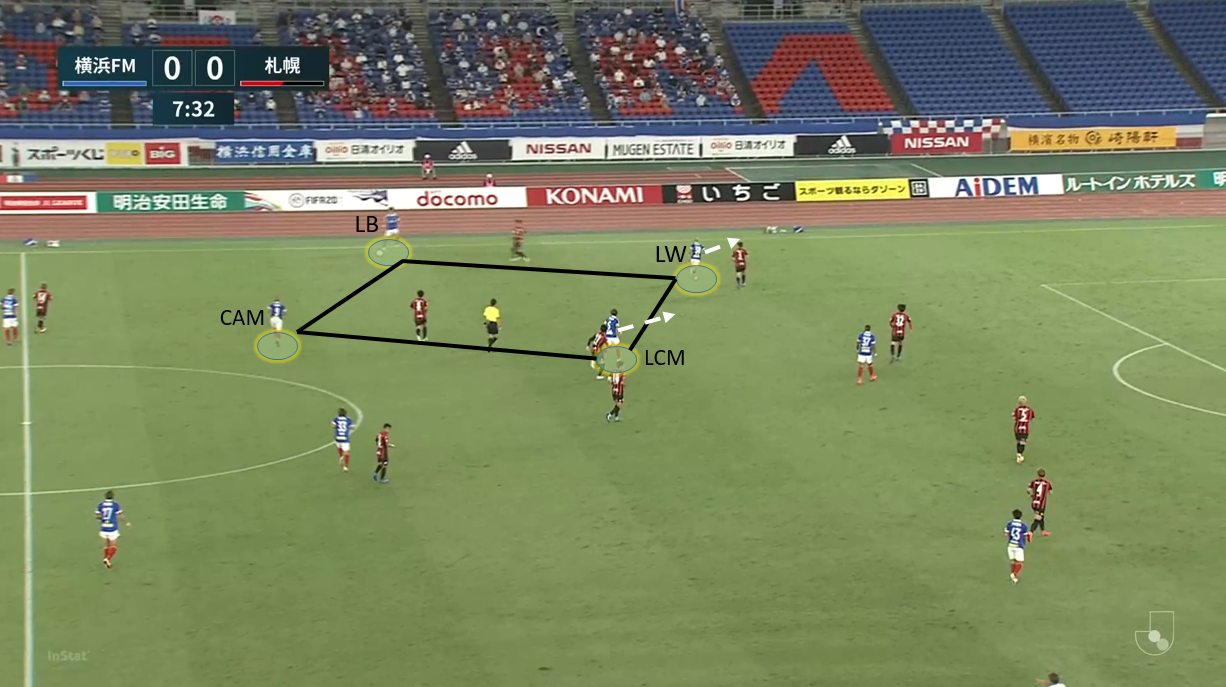 Here, Hatanaka (LCB) passes the ball to Takano (LB) and soon a diamond is formed between Júnior (CAM), Ogihara (LCM), Maeda (LW) and Takano (LB). The movement of Maeda drags away a defender as well as created space for the incoming Ogihara. 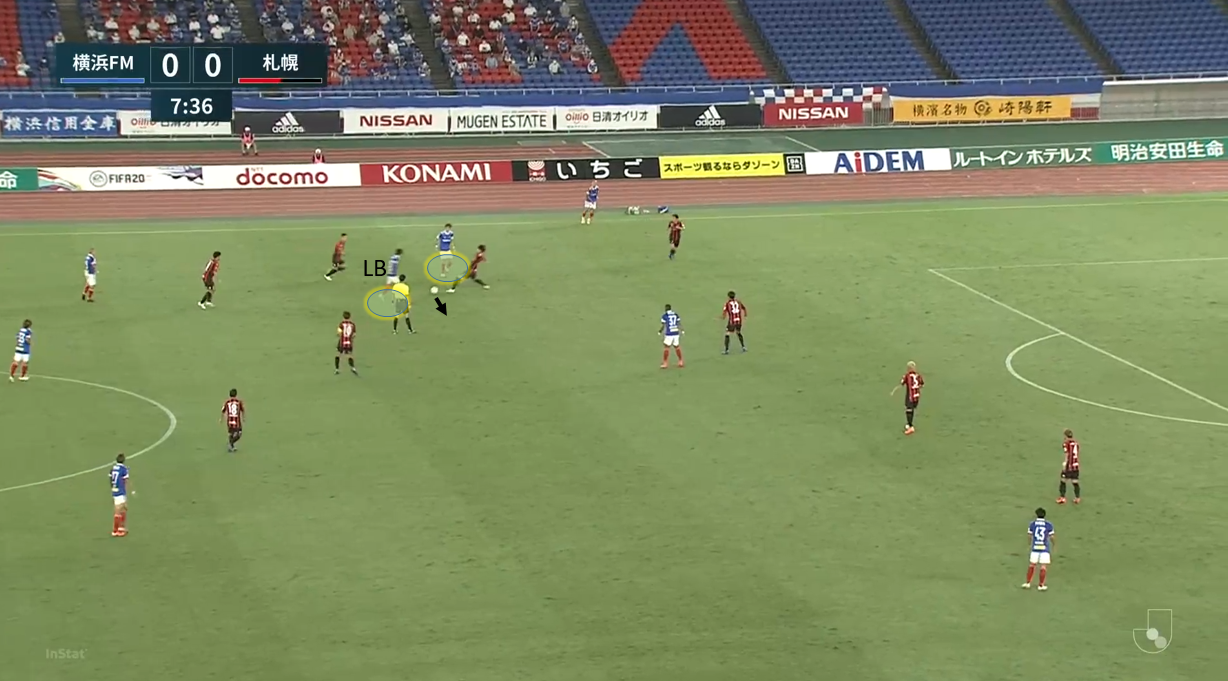 The Marinos press and Conadole build-up

Consadole found it difficult to break the shackles of Marinos’ press throughout the game. Consadole generally mix their game with short build-up and occasional long balls from the back. However, against Marinos, they opted to go long more often. Consadole played 14.22% of their passes through long ball whereas the average of the season being 11.83%. The goalkeeper, Takanori Sugeno played 15 long balls against the Marinos whereas his average of the season is 8.2.

The Marinos press fluctuated mainly between 4-2-3-1, 4-1-4-1, and 4-3-3 depending upon the dynamics of the game. The main idea was to prevent the defenders from linking with the midfielders through short passes. 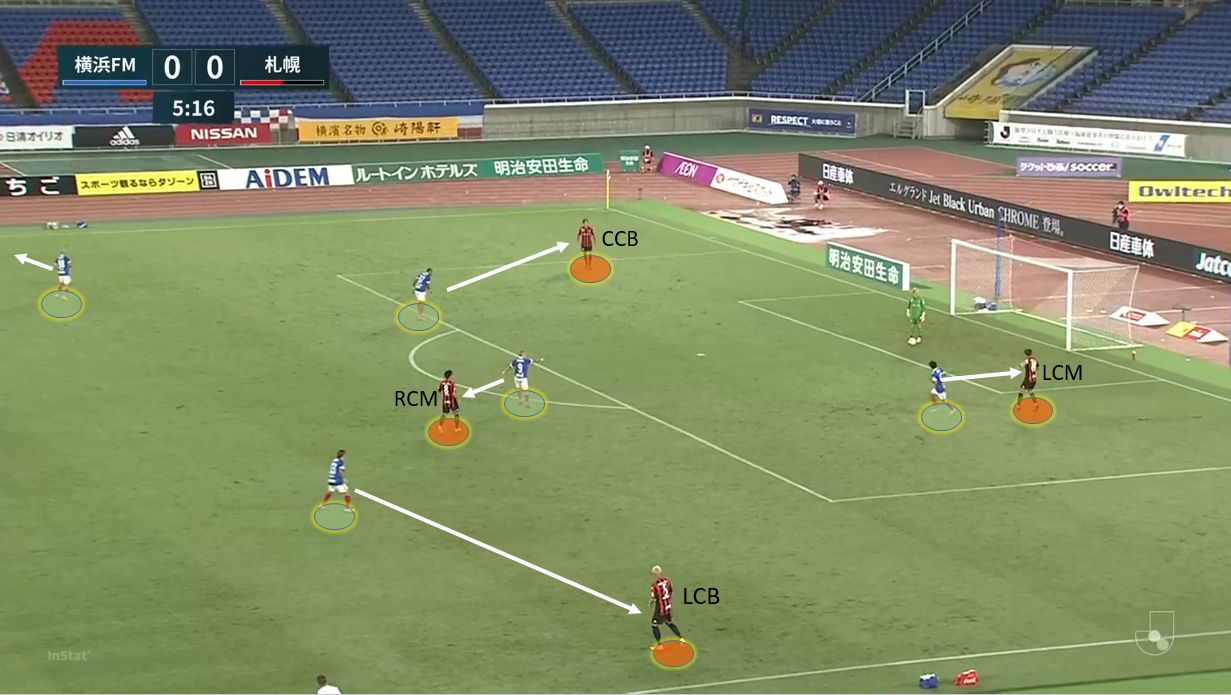 To counter Consadole’s above build-up, Matsuda and Santos, pressed the current centre-backs, Júnior prevented a pass from goalkeeper to the midfielder. Wada and Maeda positioned themselves in the half space channels with an intention of pressing the current Consadole full-backs as well as protecting the half spaces.

The other pressing formation which Marinos utilised often is the 4-2-3-1 press, where the striker would press a centre-back and prevent the lateral passing lane to the other centre-back. Júnior would follow the Consadole pivot and the wingers would position themselves in the half space near to the full-backs. Wada would mark an attacking player dropping deep and Ogihara would either protect his defence by positioning him in a space in front of them or follow another dropping attacker depending upon the proximity to the player. 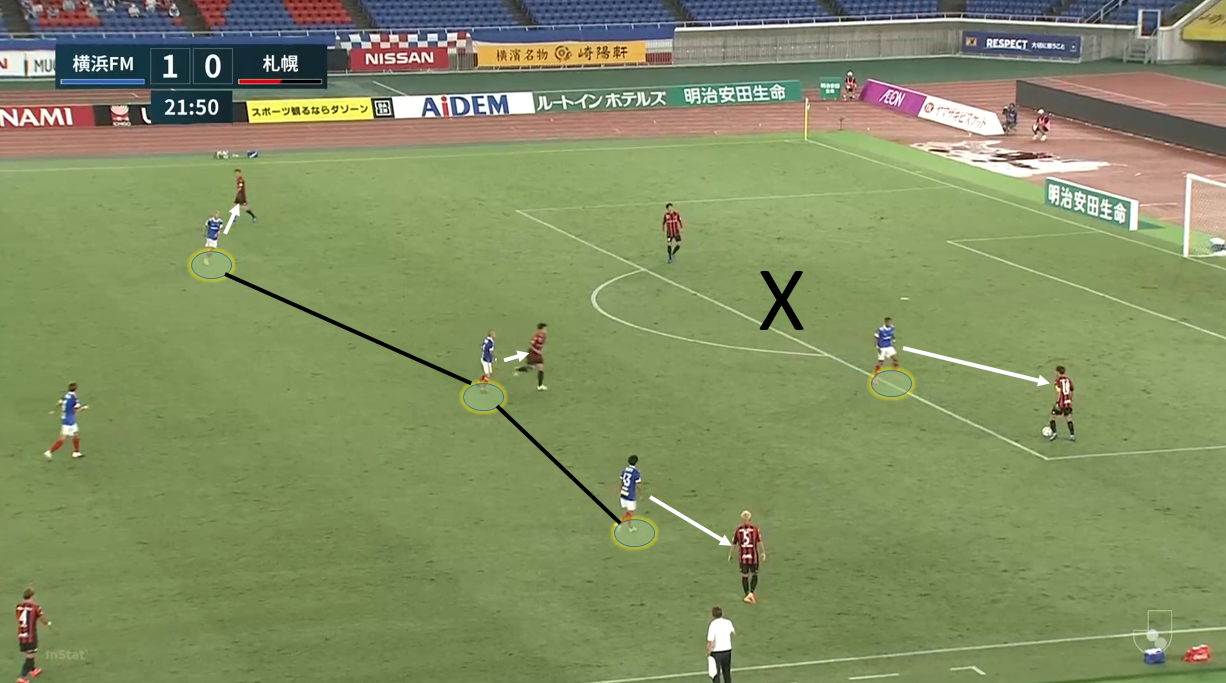 Angelos Postecoglou, former Melbourne Victory gaffer, instructed his wingers to position themselves in the half space initially to protect the half spaces as well as to create a pressing trap on the flanks. Marinos pressing the central corridors means Consadole either have to go long or build-up through the flanks and there lies the problem. 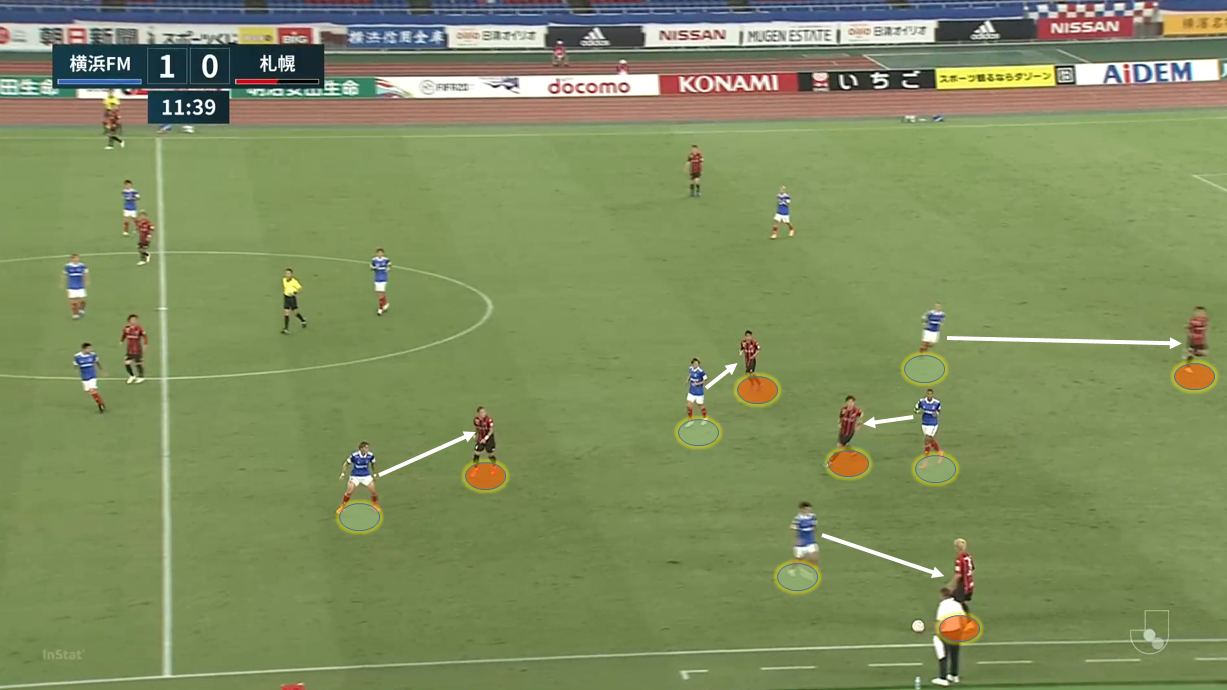 Once the ball is played on the flanks, winger presses him, and the nearby Consadole players are closely marked.

Consadole in the final third and the flaws in transition

Yokohama F. Marinos defended in a high line which is their usual game and the oppositions generally attack them by overloading the last line and runners attacking from deep. Consadole too tried the same method without much success. 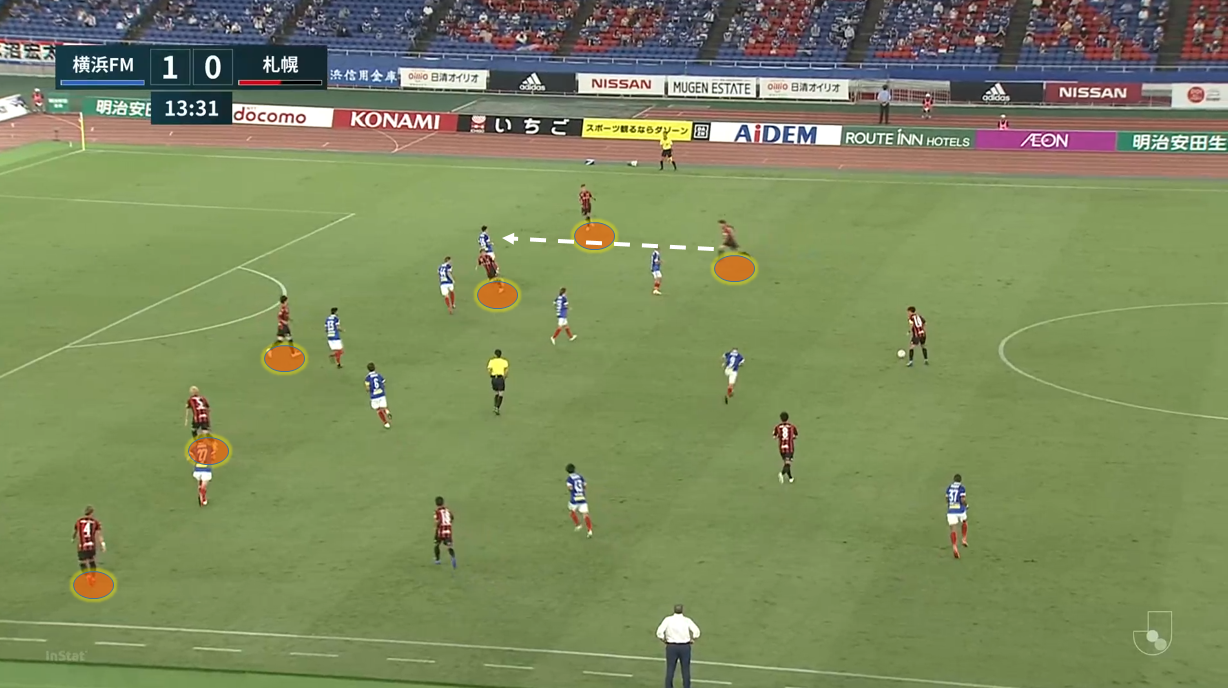 As can be seen in the above image, five Consadole players overload Marinos’ last line of defence and another player making a deep run. Consadole did not find any success because most of the time the ball was poorly played to the runners, either behind them or a complete miss pass.
However, overloading with too many bodies in the final third put them in a lot of conundrum in the transition. 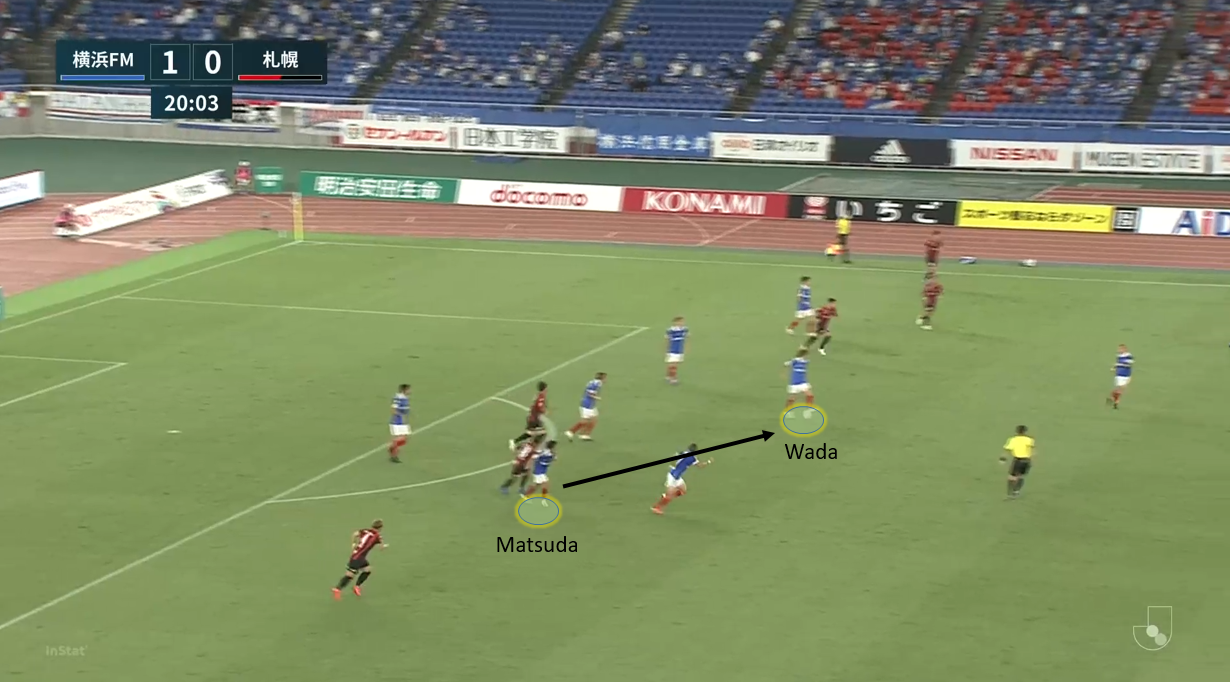 Here, Matsuda (RW) recovers the ball in their defensive third and passes the ball to Wada and Consadole’s rest defence is so flawed that there is not even a single opposition player to put pressure on him. 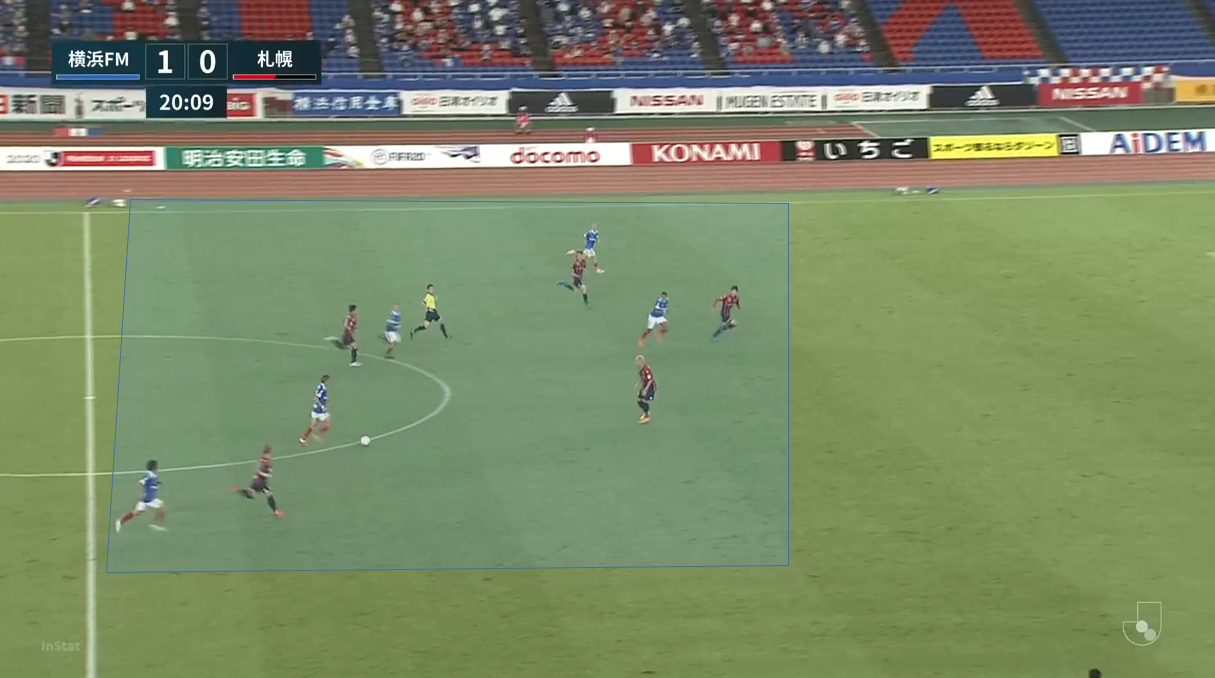 It creates a 5 v 5 situation. Fortunately for Consadole, Santos missed a header from a point-blank range with no pressure.

Even with Marinos’ brilliant performance Wednesday night, it was more of a Consadole loss than a Marinos win.

With this win, Yokohama F. Marinos climbed up to 6th place and reduced their gap to 12 points behind the league leaders.