After a successful tournament, the MLS has resumed league play by restarting the table and giving each team a clean slate. The two divisions, the eastern and western conference, are continuing matches while keeping a keen eye on coronavirus precautions.

Two teams that would have hoped for a better start to league play are Chicago Fire and FC Cincinnati. They have taken a backseat in the MLS power rankings as teams such as Orlando City, LAFC and the Seattle Sounders have proved to be better in the opening matches. Chicago Fire could be compared to a team such as Arsenal in recent years. They were once dominant like Arsenal, but now the likes of Liverpool and Manchester City run the Premier League landscape. The Fire was one of the first MLS expansion teams and has had great success in the past, yet they are struggling to perform in the current footballing climate.

On the other hand, FC Cincinnati is somewhat of MLS newcomers as they begin their second season here. The MLS is Back tournament was a great opportunity for Jaap Stam, former Manchester United defender, to organise his side for the start of the MLS league play.

This tactical analysis and match report will explain the tactics of both Chicago Fire and FC Cincinnati as the former side secured a convincing 3-0 victory. 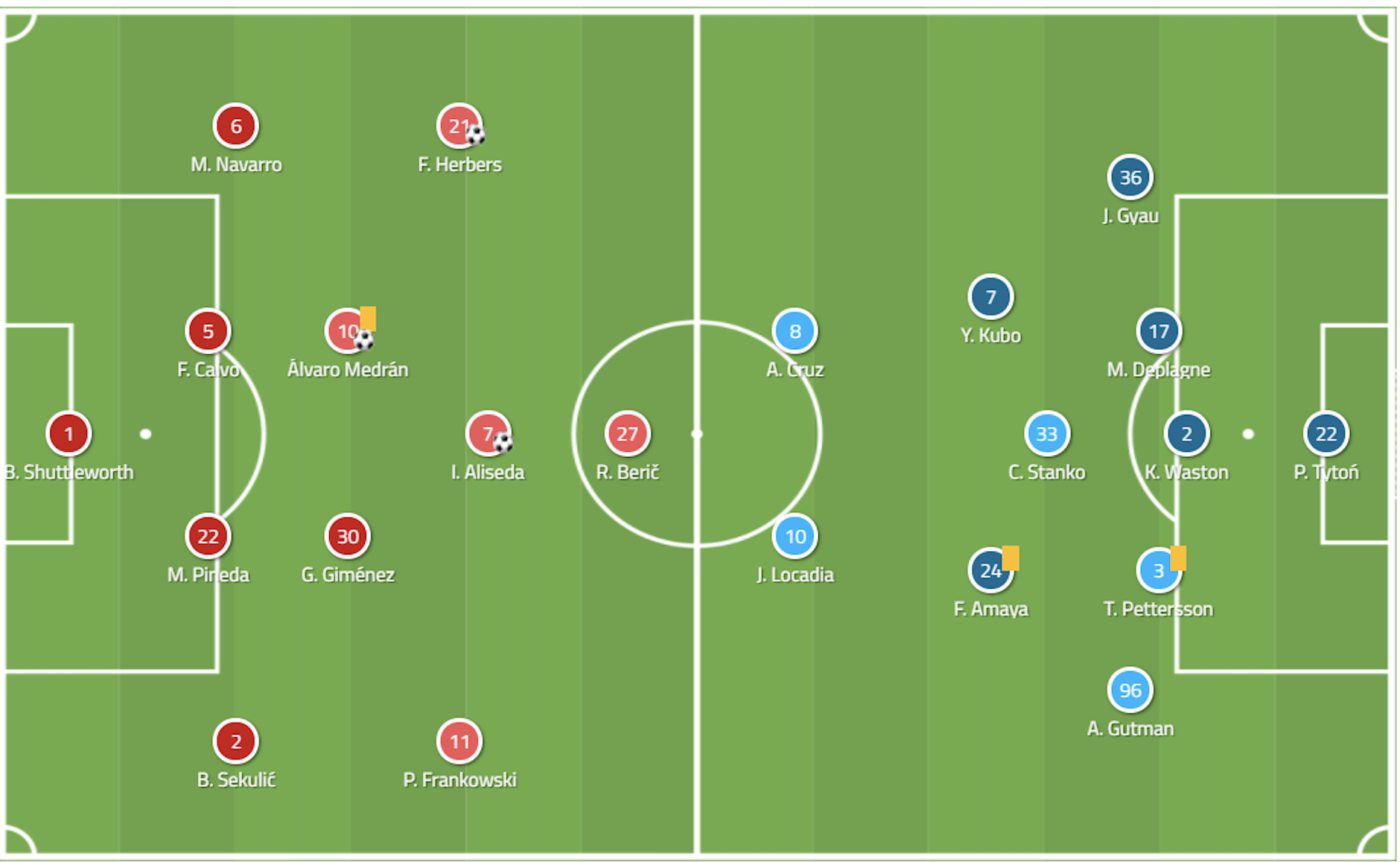 Chicago Fire, led by Raphaël Wicky, set up in a fairly balanced 4-4-1-1 formation. They used this formation throughout the whole match because of the consistency and results that it got them. The four defenders were protected by the flat midfield line, which included the danger man during the build-up play for the Chicago Fire: Alvaro Medran. The Spaniard played a crucial role while on the ball. Przemysław Frankowski was another dangerman, who was stationed on the right-wing but had the ability to get in and around the box. Finally, two forwards lead the line with Ignacio Aliseda taking charge of the other creative role at the tip of the midfield.

Jaap Stam, manager of FC Cincinnati, took a much different approach. He set up in a 5-3-2 formation, showing defensive tendencies even before the opening whistle. This decision was a crucial part of the match, something which will be explained further in the analysis. On the team sheet, the three midfielders were asked to do a lot of the heavy work in front of the back-five.

From the opening whistle, Wicky wanted his side to be pressuring the ball at all times. The Swiss made his tactics very clear as his hand gestures and energy on the sideline suggested he demanded purpose while his side was in the defensive phase of play. Because FC Cincinnati were in a back-five, theoretically it would be easier to pass around the back due to a numerical advantage they possessed over the Fire’s formation. However, Wicky did not want to allow this time on the ball.

While in the defensive phase of play, the Fire’s 4-4-1-1 changed into a 4-3-3 because of the pressing traps that they would implement. Fabian Herbers and Frankowski would push high up the pitch in order to be ready when the ball would be played wide to the outside centre-backs of FC Cincinnati.

A pressing trap occurs when the team in defence executes specific movements while pressing in order to trap the opposing side in an area of the pitch. Typically, after designing these tactics, this area will be favourable for the defending team to win the ball back due to a numerical advantage or trap them in a tight position that is very difficult to play out of. Teams who face a pressing trap will either have to move the ball at a much higher tempo to relieve themselves of the press, or they will have to resort to a long ball.

In the case of Chicago fire, Wicky designed their press to start with the furthest player forward for the Chicago Fire. Most of the time that was the striker Robert Berić. As said before, this was Chicago’s main defensive tactic from the opening whistle. Within the first thirty seconds of the match, the Fire dictated play.

The analysis below shows how the Fire’s pressing trap develops. Berić is far from the ball but had instructions (before the match) to initiate the pressing trap. He sprints towards the Cincinnati goalkeeper who is forced to make an early pass to the outside centre-back due to the immense pressure.

The exact moment the ball is released from the goalkeeper’s foot, the right-winger Frankowski immediately sprints to close down the ball.

After such immense pressure, Frankowski is able to put in a tackle on the outside centre-back in possession of the ball.

Wicky’s tactics worked early and often for the Fire who limited the attacks of FC Cincinnati, which will be explained in the next section of this tactical analysis.

Chicago’s defensive tactics frustrated FC Cincinnati because it prevented them from building out from the back, part of Stam’s tactics at the beginning of the match. The analysis in the previous section provides an example of how building out from the back was incredibly difficult for Cincinnati. Because of this, when trying to push further forward and creating chances towards the goal, it was almost nonexistent.

The Chicago Fire pressing tactics yielded impressive results, especially when looking at the PPDA statistics. What PPDA means is the number of passes that a team will allow while the opposition is in possession (on average). As seen in the chart below, the Chicago Fire held Cincinnati to an average of 8.7 passes per attacking action, and only 6.1 passes on average in the first half. These numbers are extremely telling when looking at the performance of the team’s defence combined with the lack of performance of the attacking team. To put it in perspective, FC Cincinnati, who lost the match, had a PPDA of 15.0. 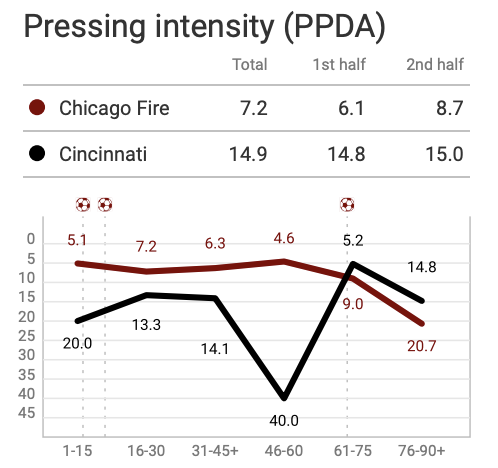 While the PPDA statistic shows how good a defensive team is, it also highlights the inability of the attacking side to break down its opponent. This is what happened during the match against the Chicago Fire for FC Cincinnati. They could not create chances going forward. The reason for this lies in the formation that Stam set his team in.

FC Cincinnati started in a 5-3-2 and stayed true to that formation until the third goal was scored by the Chicago fire. There is no surprise that they could not attack with purpose due to the formation they set out in and the way they played the match.

In a 5-3-2, the wingbacks become a crucial part of the game’s strategy. The reason being that the midfield and strikers are so narrow, which allows for space to open up on the wings. Ideally, this is where the wingbacks can push forward and help in attack while still having the ability to push in defensively to form a back five. An example of a team executing this theory well is Borussia Dortmund.

However, another possibility was that Stam was hoping to set up his team to hit on the counter-attack. While this could have worked with the set up they had, again, the execution was poor. FC Cincinnati managed one shot on target compared to Chicago’s seven, a statistic that could almost seal Cincinnati’s fate by looking at the team’s stats.

It was not just the attack that suffered while in the 5-3-2, but the defence also struggled as they allowed three goals. The reason for this lack of ability to defend was because they allowed too much space for the attacking players of the Chicago Fire.

In this example, the Chicago Fire is building up play towards Cincinnati’s goal. The defensive line is in a flat 5 back while the wingbacks are being pulled back instead of in the midfield areas. This creates a lot of space for Wicky’s men to push forwards towards goal and float in dangerous balls in and around the box. This is how the first goal was scored and how another goal that was disallowed originated from. 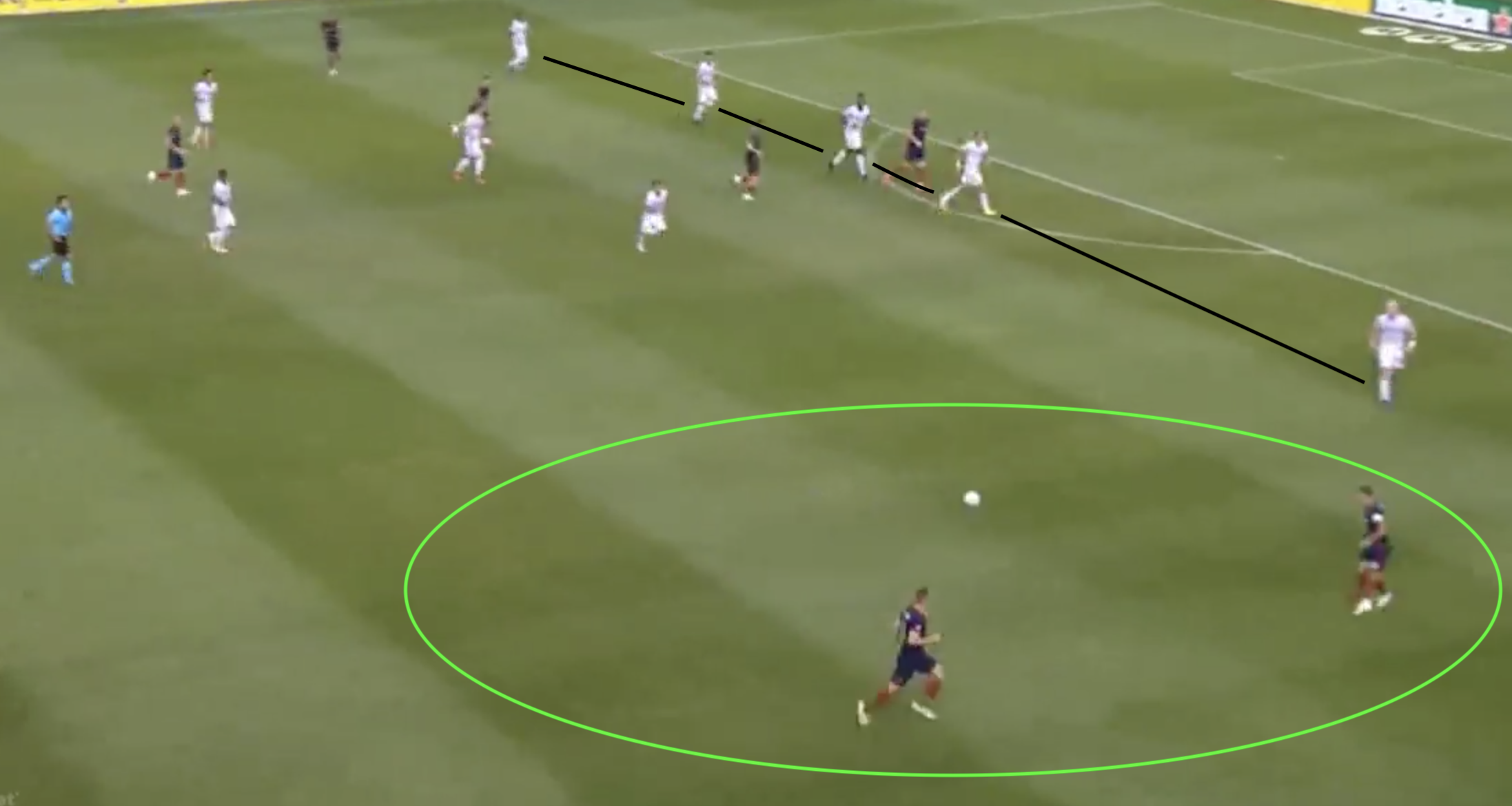 After the third Chicago Fire goal hit the back of the net, Stam had seen enough of his side set up in the 5-3-2. At this point in the match, they needed to chase the game, but perhaps they should have set out from the opening whistle in the newly found 4-4-2. FC Cincinnati mirrored the shape of the Chicago Fire and found much more success.

FC Cincinnati achieved 63% and 60% possession in the last two phases of play while their attacks per minute ratio increased dramatically, This curve shows just how significant Cincinnati’s changes in their formation were. They began to play more dynamic attacking football. 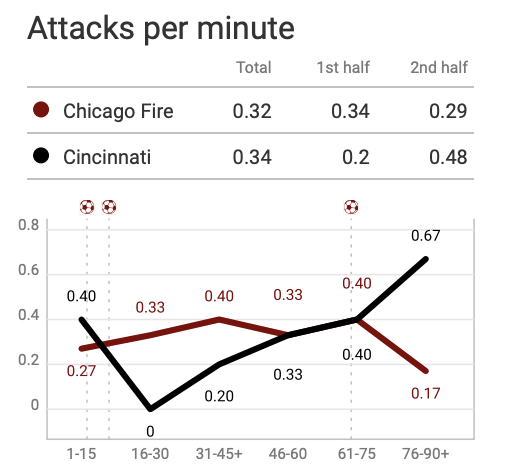 This match was lost due to Stam’s defensive tactics in the 5-3-2 formation. FC Cincinnati did not end up firing on all cylinders during the match. They lacked an attacking presence and were stagnant defensively. On the contrary, the Chicago Fire were extremely dynamic and attacked the spaces that were given to them. There were many moments of brilliance which justified the 3-0 scoreline.