It’s been a far from ideal year for Sheffield Wednesday, and the upcoming campaign is likely to be their toughest since earning promotion to the Championship in 2012. The Owls will start the season on -12 points after breaching profitability and sustainability regulations. Garry Monk’s side only won four times in the entire second half of the season, so they’re desperate for new recruits.

So far, Wednesday have brought in three new players. One of those is exciting attacking midfielder Izzy Brown, who joined on a season-long loan from EPL outfit Chelsea. Brown spent last term on loan with Luton Town.

This scout report will provide a tactical analysis of Brown’s game, giving an insight into what he’ll bring to Hillsborough.

23-year-old Brown has played in a few different positions in his short career so far, but he produced his best form playing in the number 10 position for the Hatters last season. The former England youth international made 14 of his 17 starts in attacking midfield, and in those games he scored one and set up five. Brown also played once off the left and twice in central midfield last season, and he’s capable of featuring as a striker. 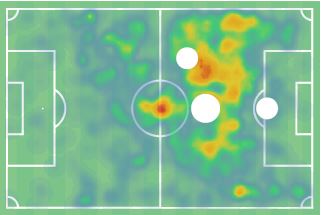 Brown’s heatmap from last season shows that he likes to operate in pockets of space between the lines of the opponent’s midfield and defence. He also likes popping up in wider positions, and he tends to naturally drift over to the left side of the pitch if the centre gets congested. Then, he can cut inside onto his stronger right foot.

The former Rotherham United loanee only managed to rack up 1,563 minutes last season, as he struggled with injuries throughout the campaign.

Brown received an average of 17.31 passes per 90 minutes last season, and there’s no doubt that he was the man Luton players looked to work the ball to in attacking areas. The youngster’s game is all about getting into positions where he can receive a line-breaking pass, as you can see in the image below. 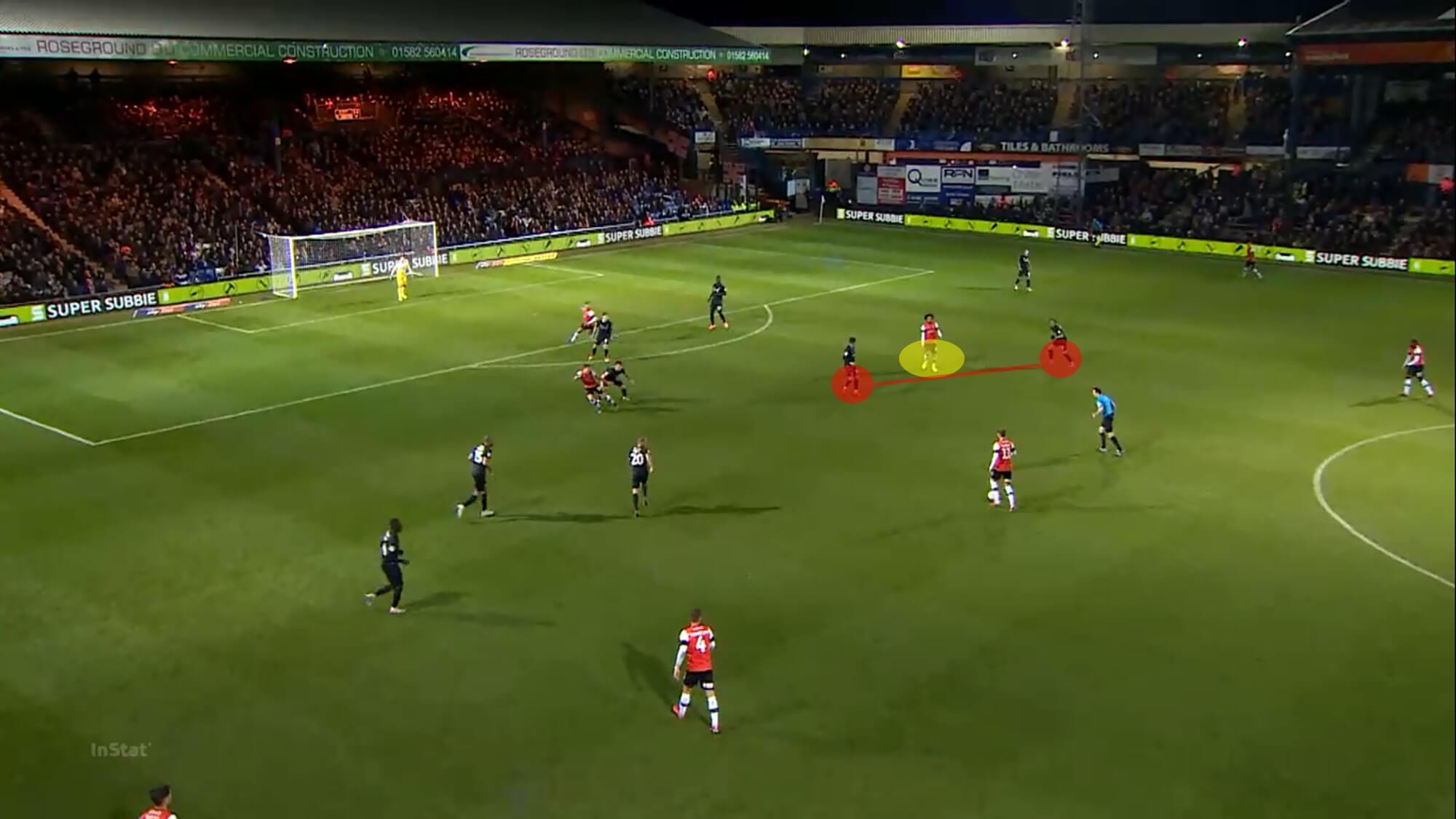 This is a snapshot of the position Brown loves receiving possession in. In between the lines of the opposition defence, and on the half-turn, so he can look to run at the defenders, who are exposed as the pass will have bypassed the midfield. From that position, defenders have to decide whether they try and engage Brown and leave space for him to potentially slip a ball in behind them, or stand off and allow him more time to pass, take them on or get a shot off. The Chelsea academy product is generally very good at drawing defenders towards him before laying off a pass to a teammate, which we’ll touch on in more detail later on in the analysis.

Brown is an expert at creating and identifying space, and he’s always trying to affect the game when his team are on the ball. In the image below, he uses his movement to create space for himself to receive the ball in between the lines. 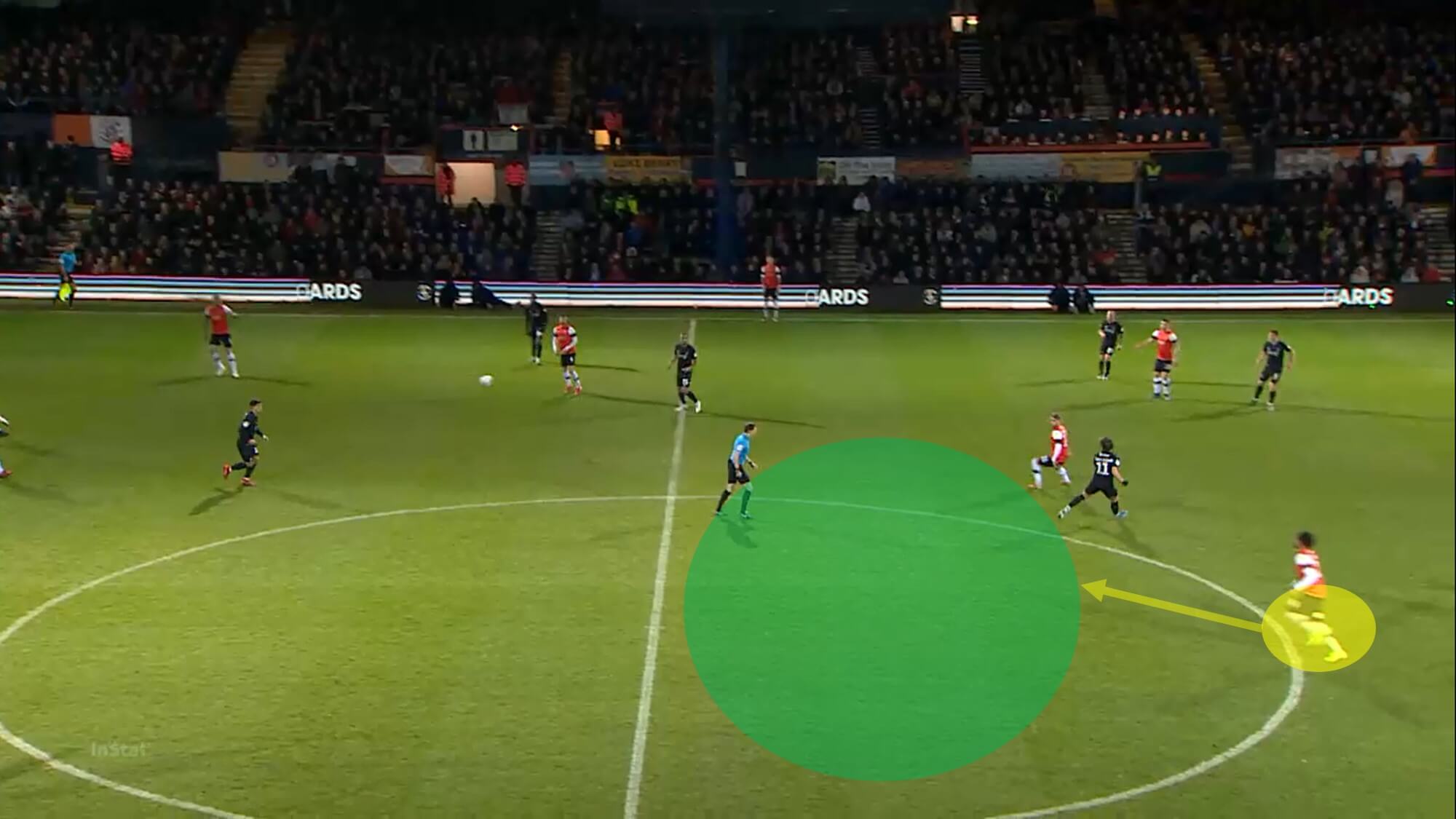 He’s pushed forward into a more advanced position, before dropping back between the lines to receive a line-breaking pass from a Luton defender. By starting further up, it meant that the Charlton player marking him was pinned further back. Therefore, when Brown dropped off, he was dropping into an area that wasn’t occupied by an opponent.

The former Leeds United loanee never stops showing for the ball, and he thrives when he has the responsibility of being his team’s main creator. When Luton had the ball out wide, he’d always show for a short pass inside. 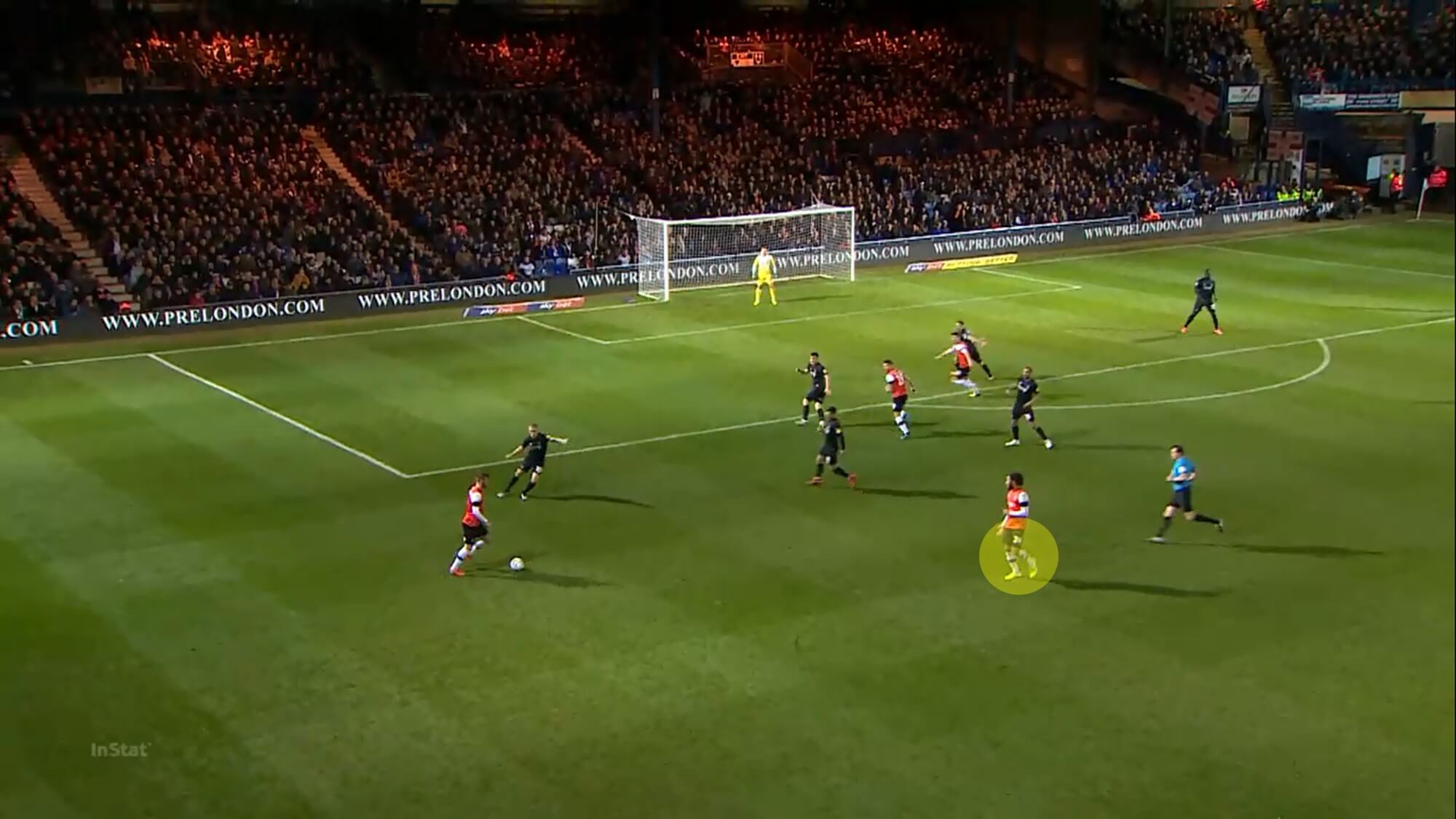 Instead of looking to burst into the area or run in behind, Brown will usually demand the ball to feet.

His ability to play in those little pockets of space is massively helped by his excellent first touch, which often helps him to evade pressure. The 23-year-old is a quick thinker who knows what his first touch will be before the ball comes to him. Because of that, Brown is extremely press resistant and it means that he’s able to operate in more crowded areas of the pitch.

The images below are an example of how Brown bases his first touch on the proximity of his opponent. 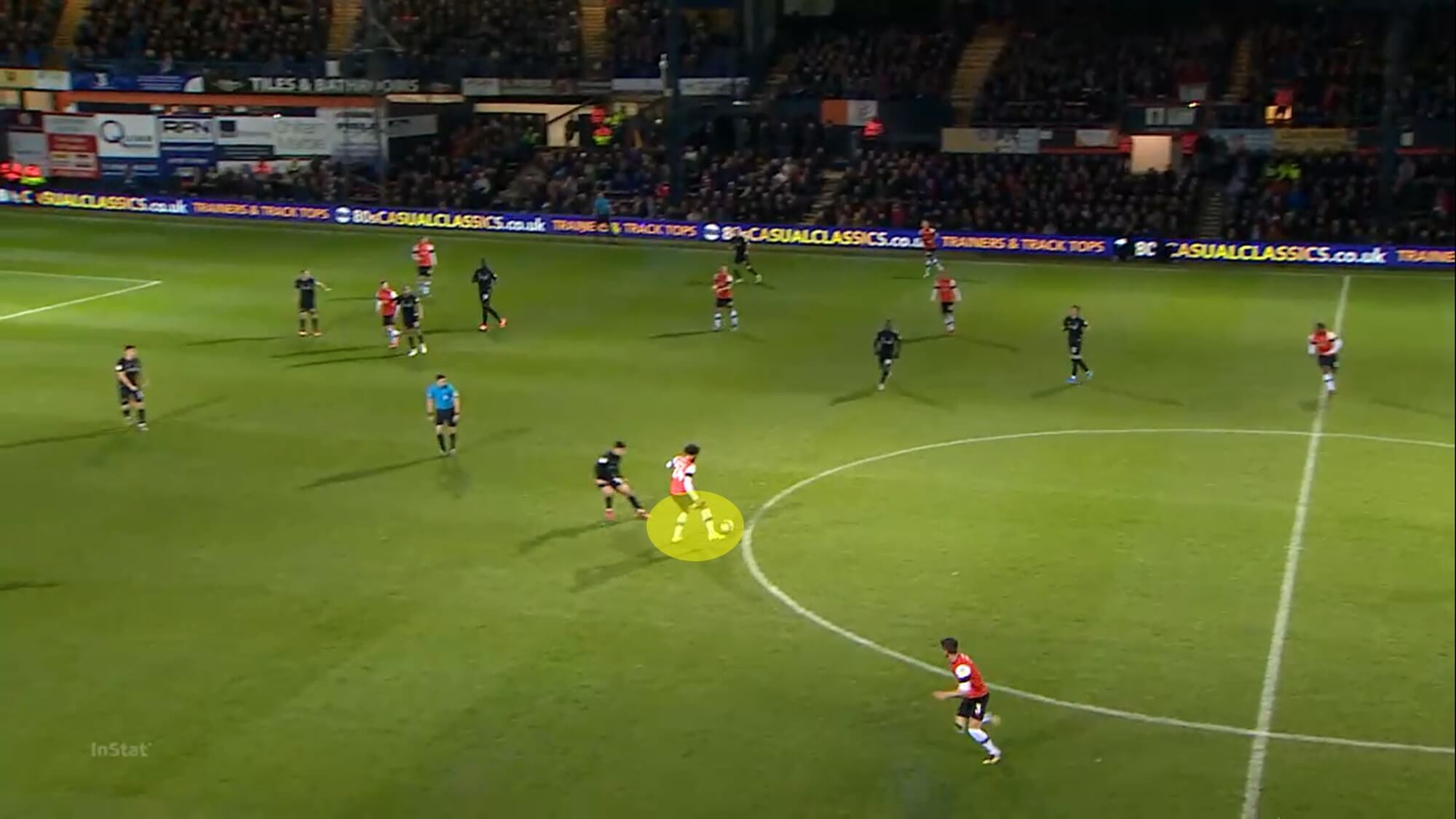 He receives possession sideways on, but he knows the best way of evading the pressure here would be to knock the ball to his right with one touch. By doing that, he’s away from the Charlton midfielder, and the right side of the pitch has opened up for him. 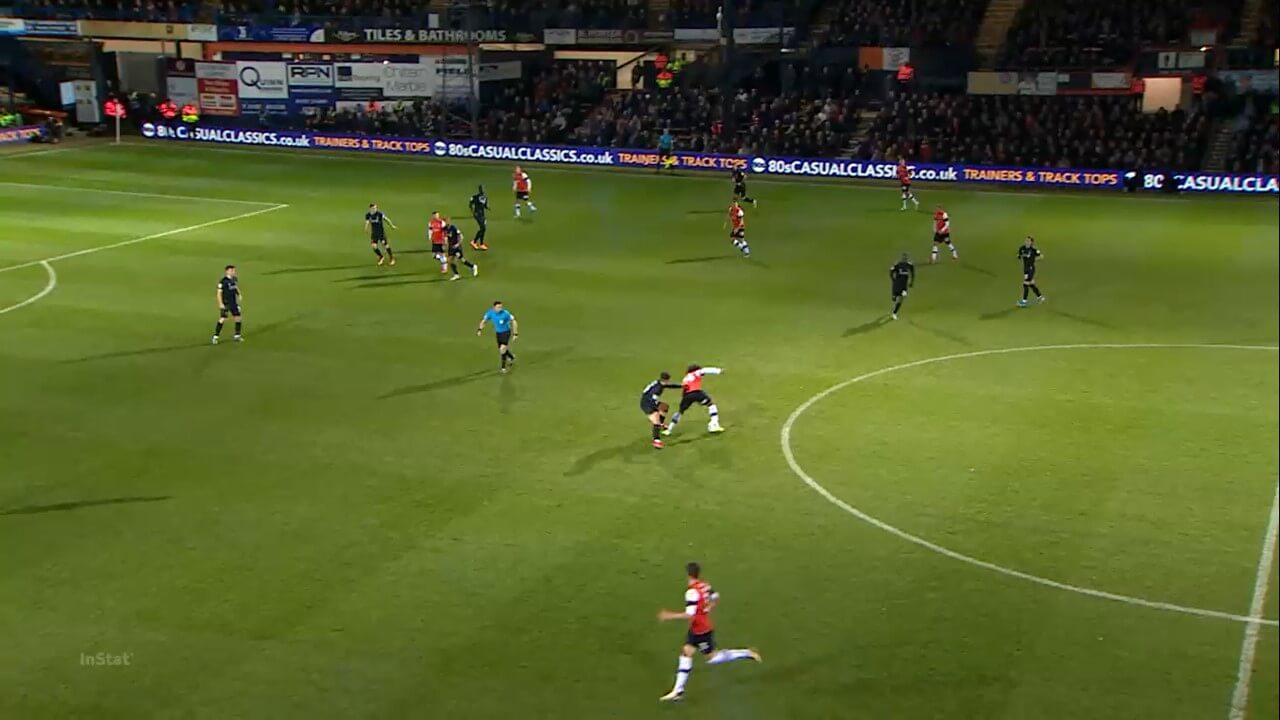 It’s no surprise to see that Brown averaged a high number of dribbles per 90 minutes because of this: 6.27 to be precise. That’s the third-highest out of all second-tier central midfielders and central attacking midfielders.

Wednesday’s newest recruit is also able to evade pressure by manipulating the ball without even touching it. In the example below, he receives the ball with his body shape pointing to the left side. 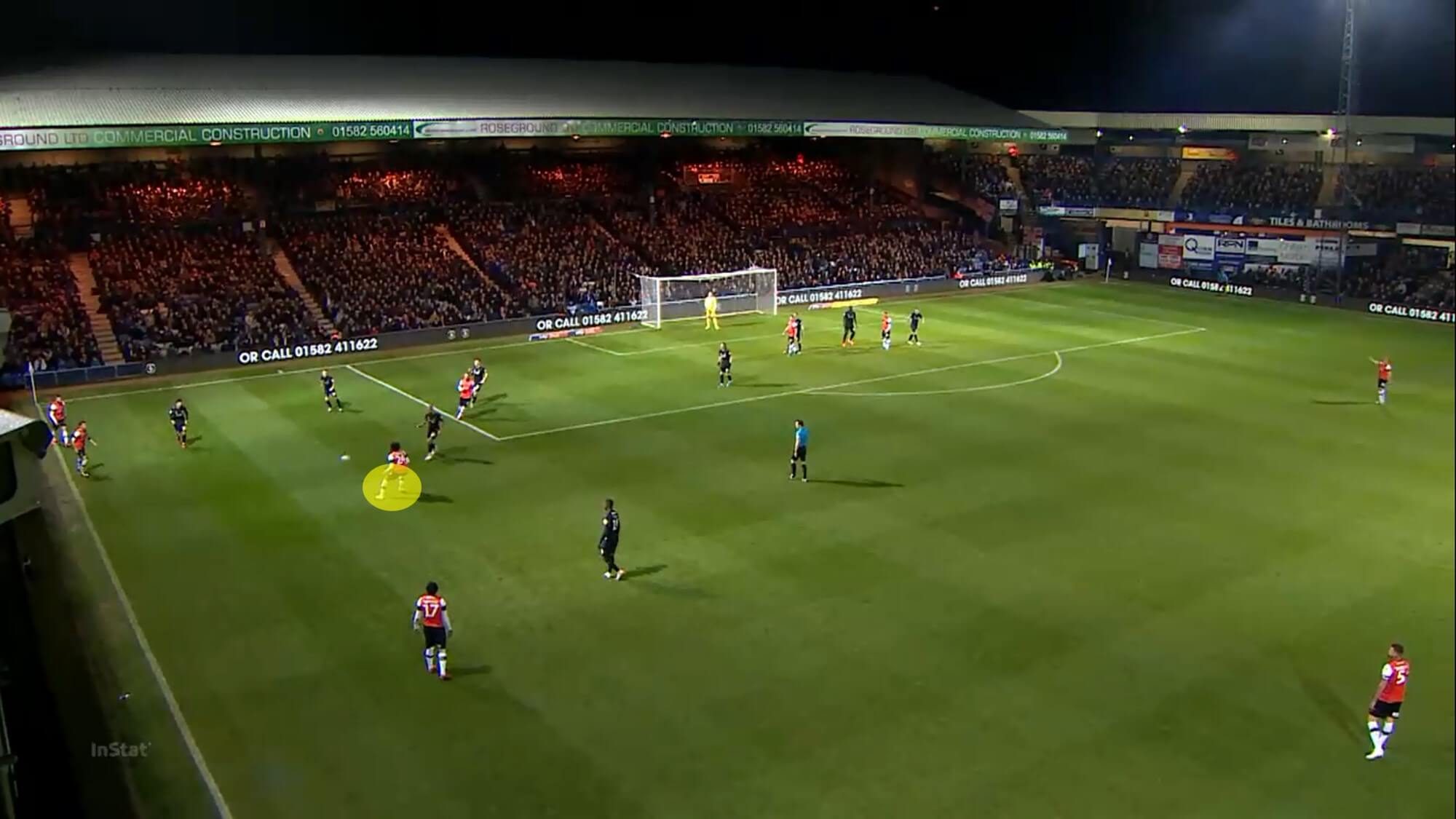 This would give the impression that Brown would take his first touch to the left of the pitch, but instead, he calmly lets the ball run across his body, before controlling it with his right boot. 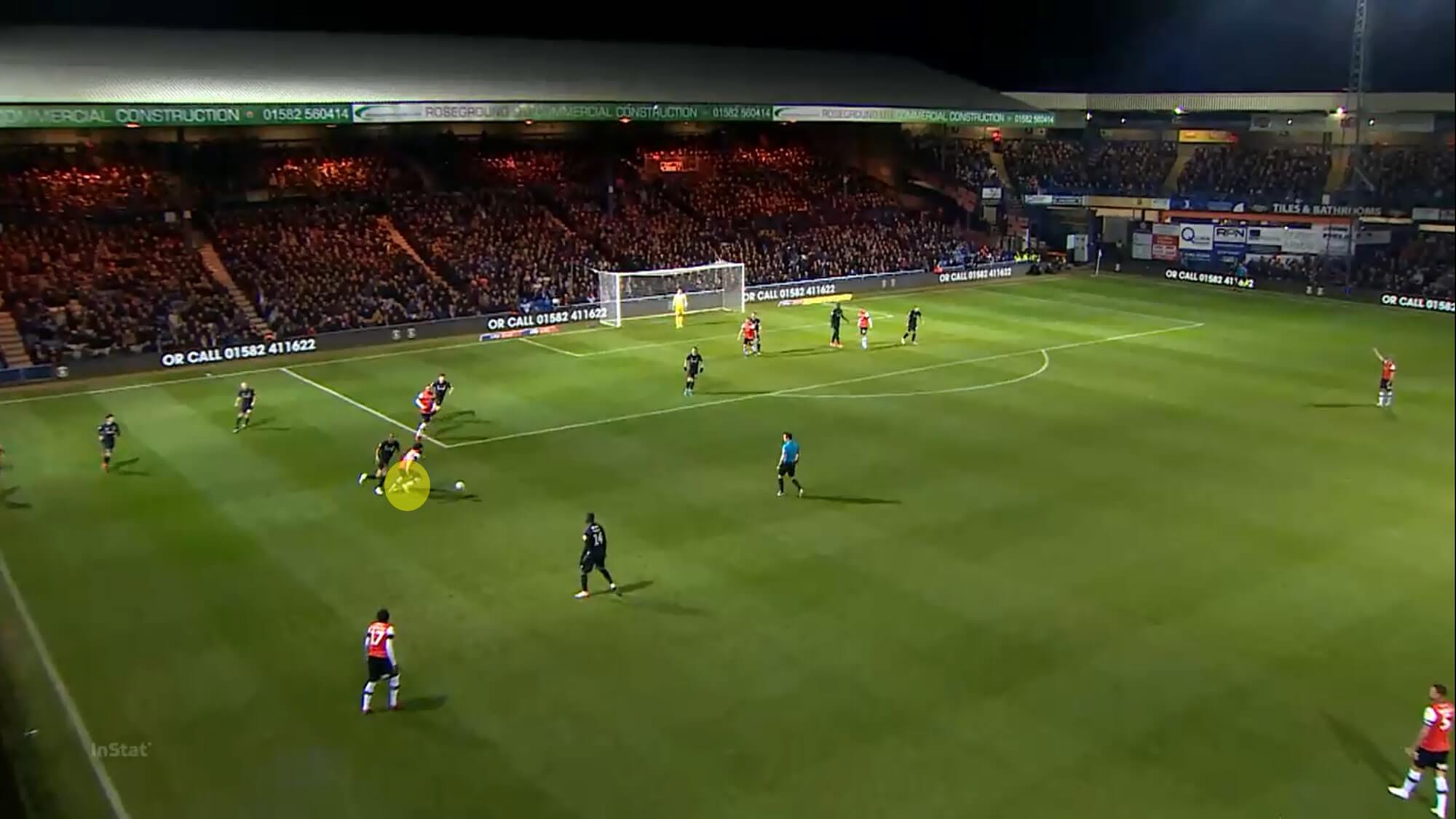 This allows him to immediately take the ball into a more central area of the pitch on his stronger side, and as you can see he’s managed to take the ball well away from Charlton midfielder Darren Pratley.

Brown only managed one goal for Luton last season, but the one he did manage to notch was set up by a sensational first touch. 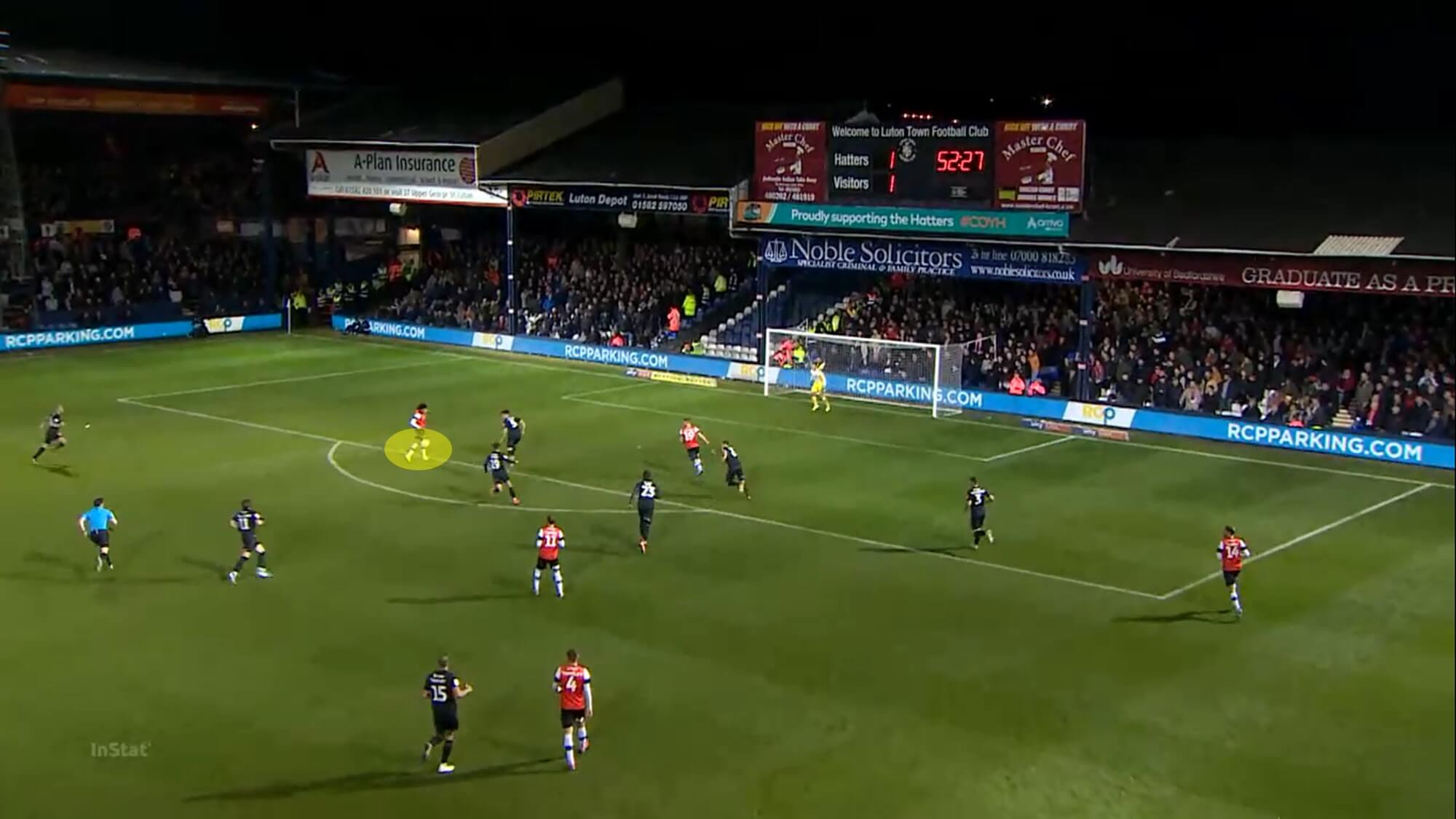 Again, we come back to that idea of Brown’s quick thinking before he makes that first contact with the ball. Instead of taking the more obvious option of taking it away from Tom Lockyer on his outside shoulder, Brown’s first touch is a classy dink over the top of the defender. This caught the Addicks man off guard, meaning he didn’t react quick enough. Brown ran onto the ball and poked it home. 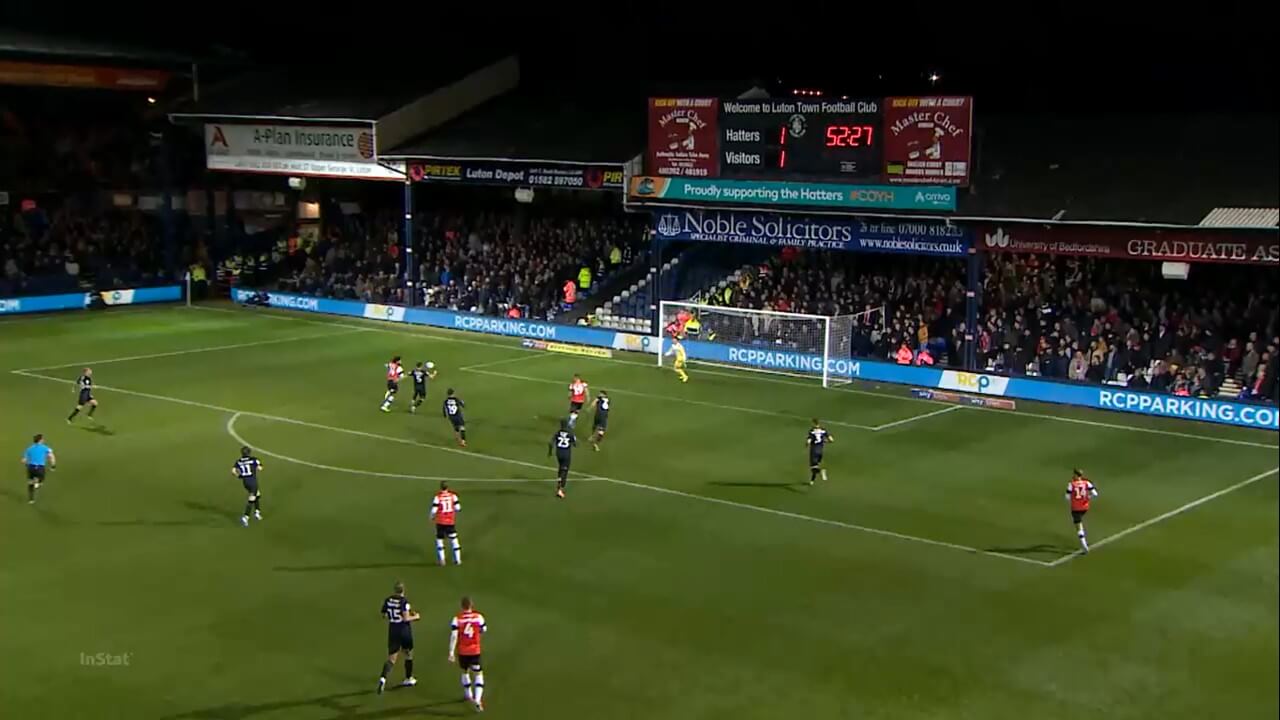 The ex-England youth international posted extremely impressive creative numbers last term. He averaged 0.33 expected assists per 90 minutes, which was the most out of all central and attacking midfielders in the second tier. Brown played an average of 0.75 key passes per 90 minutes, which was only bettered by West Bromwich Albion’s Matheus Pereira and Leeds United’s Pablo Hernandez: two players who will be gracing the Premier League next season. He averaged 4.14 passes into the penalty area per 90 minutes. Only four players averaged a higher rate in that metric, with one of those being Wednesday’s main creative force last season, Barry Bannan. 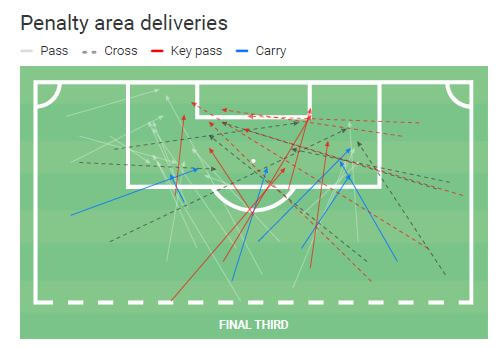 A lot of Brown’s creativity comes from central areas. Opponents knew he was Luton’s biggest threat last season. With his obvious ball-carrying ability, opposing players would try to crowd Brown out by surrounding him with two or three men. This would free up space for his teammates. The fact Brown plays with his head up means that he’s capable of slotting his teammates through. In the image below, he plays a perfectly weighted pass through to Harry Cornick. 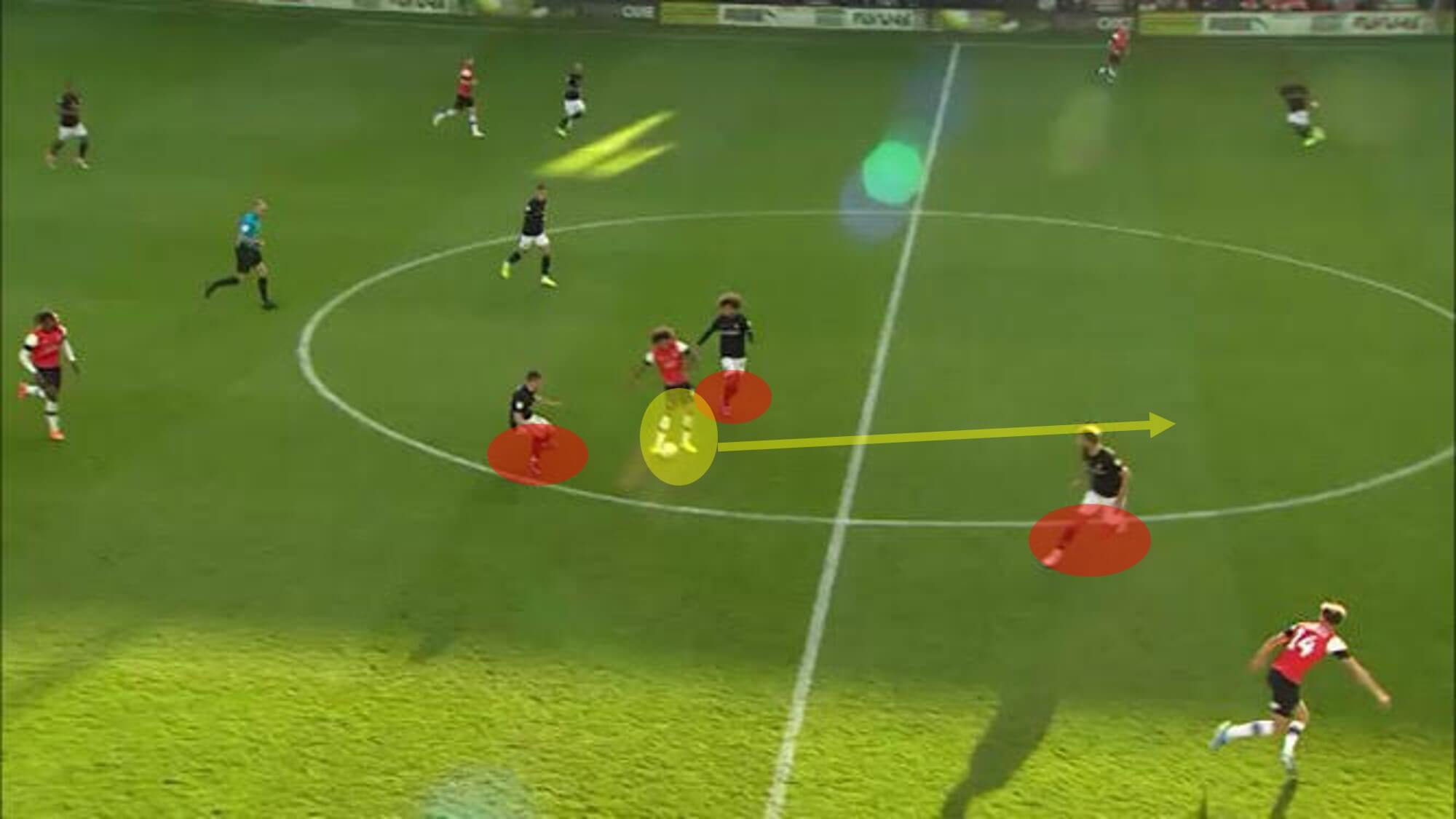 Brown frequently took corners for Luton, so it’ll be interesting to see if he does the same for the Owls. As well as being able to deliver balls into the box from dead-ball situations, Brown is no stranger to putting crosses in during open play. Despite playing as a central attacking midfielder, he does like to drift out wide. He is also capable of delivering quality balls into the box, just like he did when he set up this goal against Swansea City. 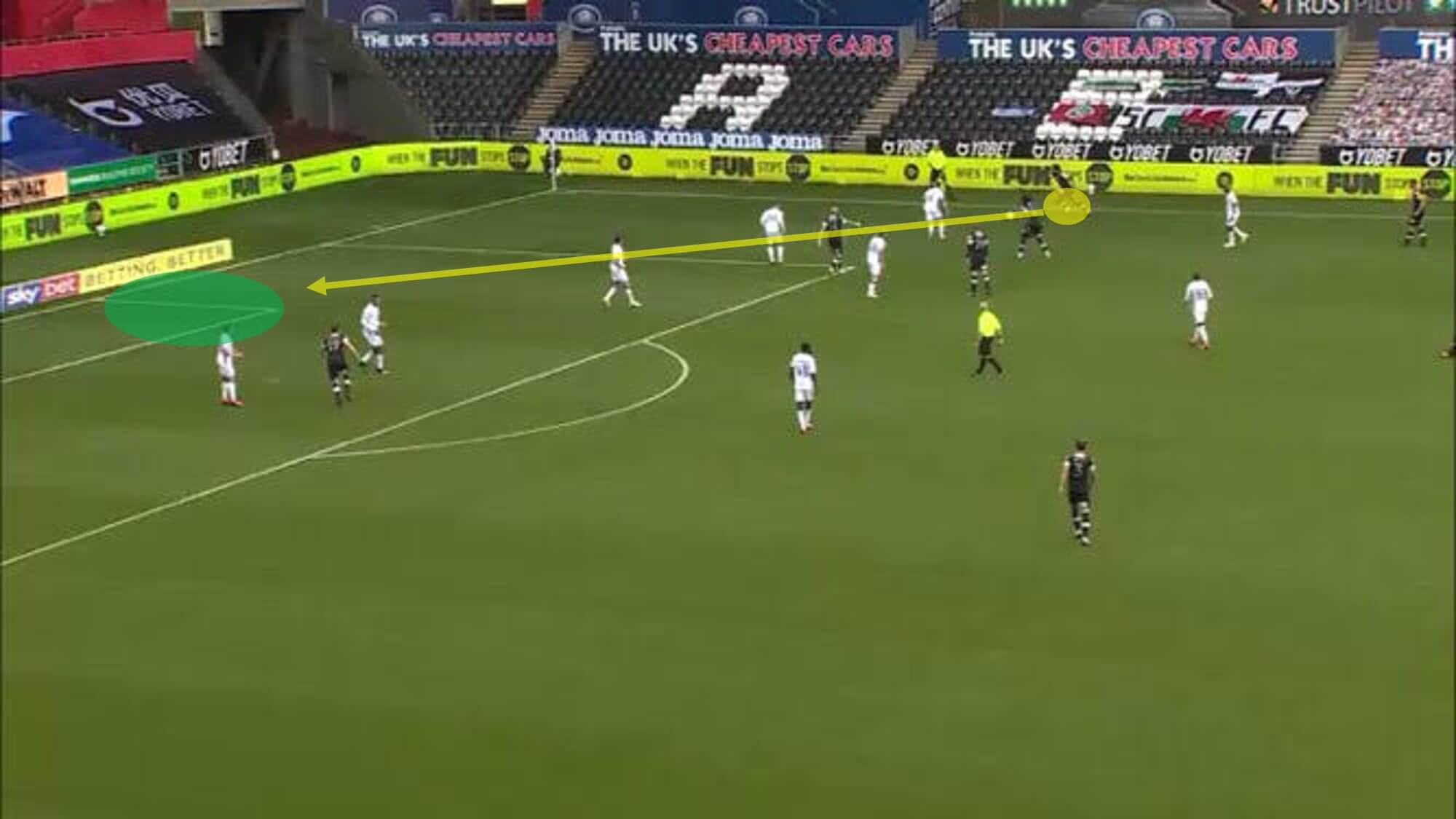 How he’ll fit in at Sheffield Wednesday

It’ll be very interesting to see where Brown fits into Garry Monk’s tactics. It’s unclear what system the Wednesday boss will favour. Up until the lockdown, Monk often changed formations as the Owls played a 4-4-2, 4-4-1-1, and 4-1-4-1. But after the break, Wednesday played a 3-5-2 system in every game that they played. If Monk persists with that shape, he may be tempted to use Brown as a striker. At the time of writing, the only other senior striker at the club is Jordan Rhodes, so necessity might dictate that we see Brown used as a frontman. To get the best out of him in that role, he’ll need to be given license to drop a bit deeper into midfield to receive the ball between the lines. Central midfielder Massimo Luongo could then be given license to make runs from deep beyond Brown when this happens.

Either way, Brown will bring some much-needed guile and creativity to a Wednesday side that only scored 18 goals at home last season. His ability to create opportunities between the lines could help them break down the more sturdy defences. Last season, the Owls averaged 16.29 crosses per 90 minutes, the third-most in the division. They gained most of their attacking success by attacking down the flanks, but they often struggled to create chances from central areas.

Last season, a lot of the creative onus was placed on central midfielder Barry Bannan. However, he spent a lot of his time in deep areas, picking the ball up from the defence and trying to progress the ball forward for Wednesday. Bannan works best when he has mobile runners in front of him, so he can pick out passes with ease. As the Owls often played with the likes of Jordan Rhodes, Adthe Nuhiu, Steven Fletcher and Connor Wickham up front the last term, mobility was lacking. Therefore, as well as taking some of that creative burden off the shoulders of Bannan, Brown’s willingness to show for the ball in advanced areas should help the diminutive Scotsman.

If Monk can get the best out of Bannan and Brown, then Wednesday should be able to create plenty of chances from central areas. Statistically, these were two of the division’s best creators in their positions the last term. We’ve compared their numbers using a percentage ranking graph. The higher the number in a certain metric, the better they were in comparison to the other central midfielders and attacking midfielders in the second tier. Each stat is per 90 minutes, apart from pass completion, which is a percentage. 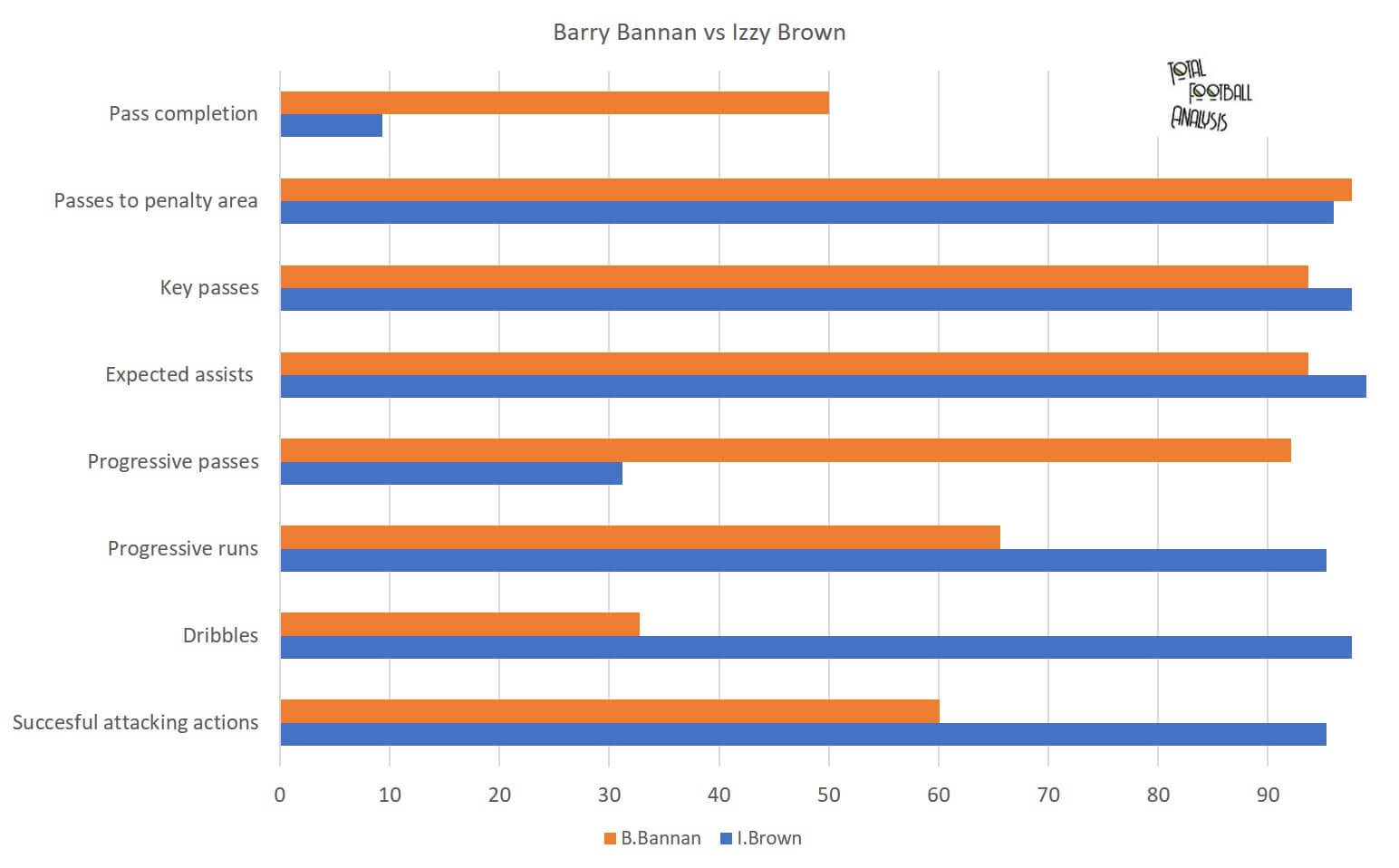 As you can see, both players excel in terms of their expected assists, passes to the penalty area and key passes. Brown tends to dribble much more than Bannan, who prefers to pass the ball into more advanced areas. The Chelsea loanee’s poor pass completion is a reflection of the difficulty of the kind of passes he tries to play. He’s always looking to unlock defences, so he rarely takes the safe option.

The big concern for the Owls will be ensuring that Brown can stay fit. He struggled with injury problems at Luton, and the same happened during his spells with Brighton and Huddersfield Town. But if Wednesday can get plenty of games out of him, they’ll have a priceless creative asset in their battle against relegation.