Young goalkeepers are fast becoming an important part of a club’s recruitment. Most are recruited for the club’s future because a goalkeeper’s peak is later than the average player. But recently, some younger goalkeepers have been performing much better than they were expected to, for example, Manchester United’s Dean Henderson.

This data analysis will look at the best young goalkeepers within the top five leagues and use statistics to outline the ones that should be recruited. I will be looking at goalkeepers aged 23 or younger, and they must have played over 500 minutes of football in the 2019/20 season. We will analyse each goalkeeper’s shot-stopping, passing, and sweeping ability using relevant data. Then, we will compile a three-man shortlist of the best goalkeepers in the sample.

Because most goalkeeping stats are heavily reflected by a team’s defensive ability, some numbers can be misleading. Goalkeepers that play for worse teams will often have worse stats. There are exceptions, however. Therefore, it is important to look at statistics that analyse the goalkeeper’s individual performance.

The first graph will look at more simple data. It will measure the strength of each goalkeeper’s defence and how they have coped with the number of shots they have faced. This graph will give us an idea of how well the goalkeepers are performing concerning their defence. Gautier Larsonneur stands out the most here. The Frenchman has the highest save percentage with 75.36%, which is very impressive considering he also faces 4.87 shots per 90, which is above-average. The 23-year-old has enjoyed a great season with Brest, being one of their standout performers.

Dean Henderson and Bilbao’s Unai Simón have the second and third-best save percentage. Henderson with 75.19% and the Spaniard with 75%. However, both face a low number of shots per 90, considerably below the average.

Recent Sheffield United signing, Aaron Ramsdale, is one of the better performers in this graph. In the 2019/20 season, playing for Bournemouth, the Englishman faced an above-average amount of shots per 90 (4.86) but had a very respectable save percentage of 68.21%.

A strong mention should also go to Markus Schubert. The 22-year-old had stints between the sticks for Schalke this season, either side of an injury. But the Germany under-21 keeper impressed in his limited games. He faced the second-most shots per 90 in this sample (6.35), and still managed an above-average save percentage with 67.27%.

The above graph doesn’t take into consideration the quality of shots faced. The next graph will measure the average difficulty of shots faced and their likeliness to save said shots. 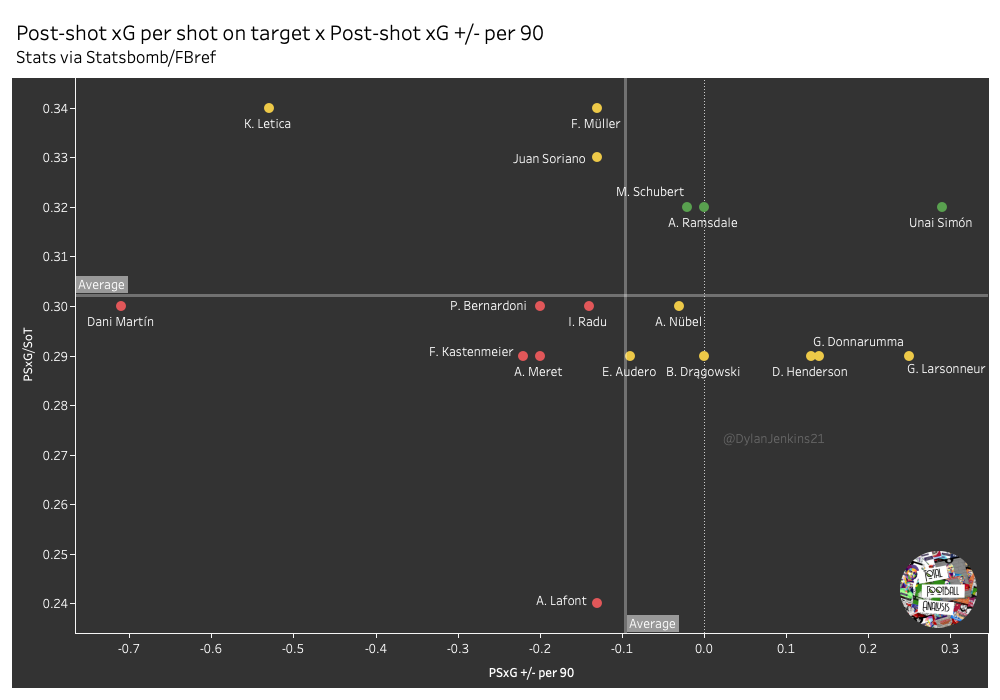 PS xG/SoT measures the average difficulty of shots faced and PS xG +/- per 90 tells us how often they save these shots.

Unai Simón impresses the most here. He faces an above-average shot difficulty of 0.29 but often saves these difficult shots, with a PS xG per 90 value of 0.32. The Spanish under-21 international has had a very good season for Bilbao. Although he doesn’t face many shots per 90, they are often difficult.

Ramsdale and Schubert stand out in the top right quadrant again. They both face the same difficulty of shots (0.32) but Ramsdale saves slightly more with a PS xG +/- per 90 of 0.

Henderson has a positive PS xG +/- per 90, along with AC Milan’s Gianluigi Donnarumma. The Italian’s team had a fairly disappointing season, finishing in sixth place, however, Donnarumma’s performances stood out. He and Henderson face the same shot difficulty as Larsonneur, but Donnarumma is slightly more likely to save them (0.14).

After analysing the best shot-stoppers with two different types of data, we can now summarise their performances using PS xG +/-. This will indicate which goalkeepers have saved the most shots above the goals they were expected to concede, in relation to the difficulty of the shot. 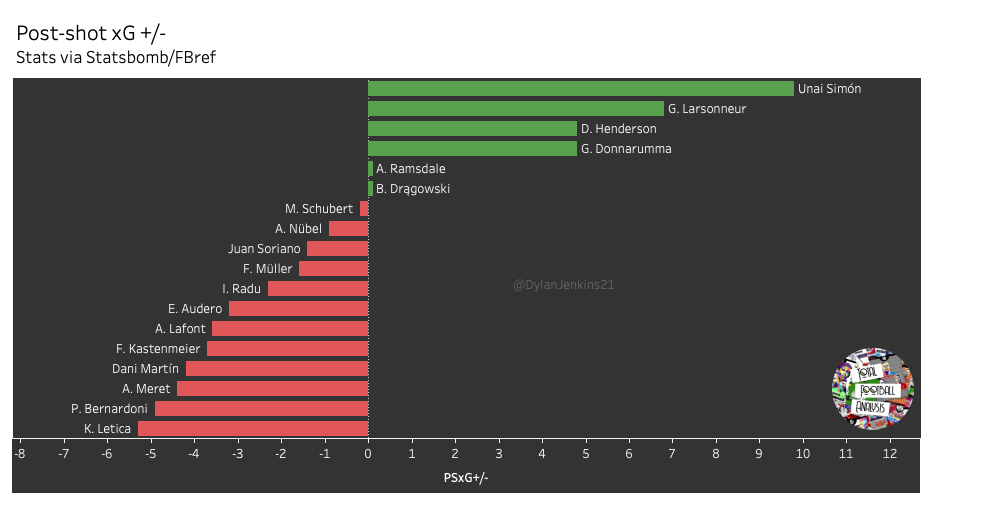 The above graph shows that a lot of u23 goalkeepers under-performed. However, most goalkeepers we have mentioned previously show up positively, except for Schubert. Bartłomiej Dragowski shows up with a value of +0.10, putting him level with Ramsdale. It has been a breakthrough season for 22-year-old Dragowski, putting in some excellent performances for Fiorentina.

As we have seen with Manchester City and Liverpool most recently, a goalkeeper is paramount to a club’s tactics. Ederson and Allison have allowed their respective clubs to reach a new level of keeping the ball and creating attacks from the back.

Because a team’s tactics have such an effect on how often a goalkeeper sees the ball, we need to look at the percentage of passes that the keeper makes. Then we can evaluate how they pass the ball whilst in possession.

The below graph will measure the percentage of passes that each goalkeeper launches. A ‘launch’ is a pass that travels 40 metres or more, coming under the ‘long pass’ category. We will look at goal-kicks launched and in-play passes launched, as well as each goalkeeper’s average pass length (indicated by the colour of each mark). 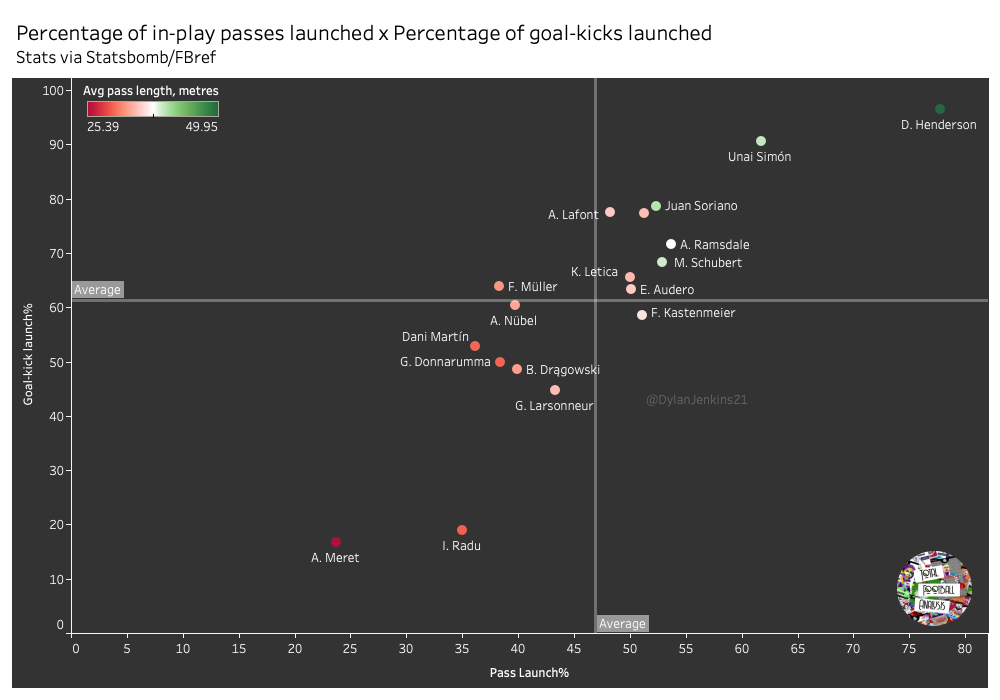 Two keepers stand out from the crowd in this graph, the first being Napoli’s Alex Meret. In what has been an overall disappointing season for Meret and Napoli, his passing qualities have still shone through. The Italian has the lowest pass launch percentage with 23.7%, lowest goal-kick launch percentage with 16.80%, and the shortest average pass length with 25.39m. The 23-year-old is by far the most capable with the ball at his feet.

The second player who stands out is Inter keeper Ionut Radu. The Romanian was on loan at both Parma and first Genoa during the 2019/20 season, showing how his passing style doesn’t change between clubs. Radu has a similar goal-kick launch percentage to Meret with 19% but has a slightly lower pass launch percentage with 35%. His average pass length is 29.86m. 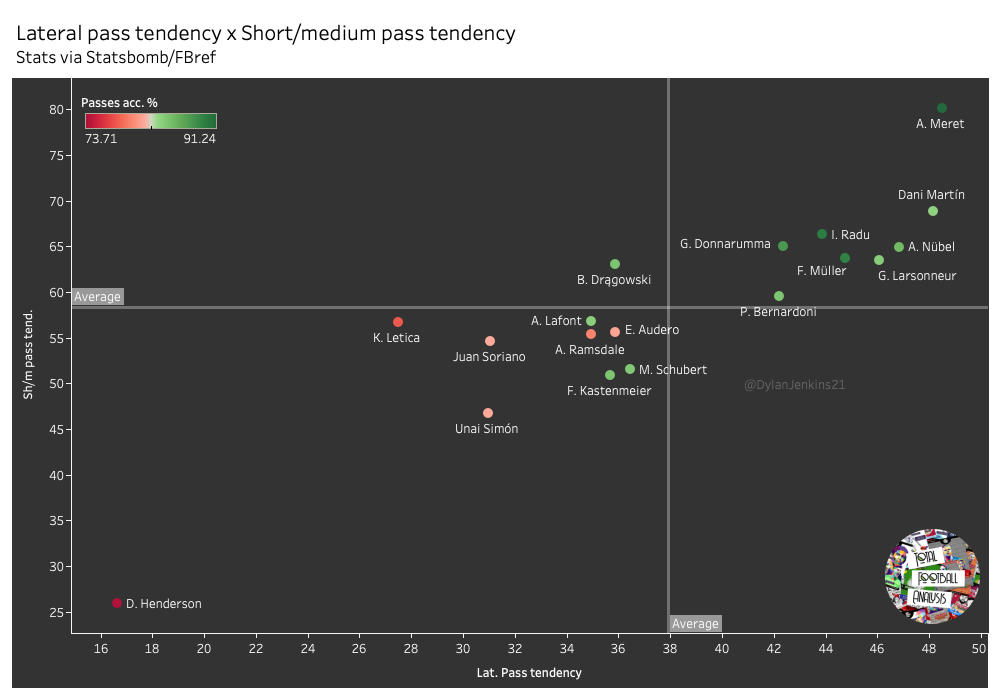 Meret and Henderson, once again, stand out for different reasons. Meret has a very high tendency in both areas, 48.49% lateral pass tendency and 80.17% short/medium pass tendency. He also has the highest pass accuracy with 91.24%. Meanwhile, Henderson is not very comfortable with the ball at his feet. He only has a 16.64% tendency to pass laterally and a 25.93% tendency to make a short/medium pass. He also has the worst pass completion percentage with 73.71%.

Previously mentioned Donnarumma, Radu, and Larsonneur stand out again. But there are a few new names here. Alexander Nübel, who has recently joined Bayern Munich from Schalke, will fit in well at his new club due to his good passing style. This Germany u21 international has a pass completion of 85.45%. He has a 46.82% tendency to pass laterally and a 64.98% tendency to pass short or medium.

Another new name is Florian Müller of Mainz 05, another German. Müller plays behind a fairly weak defence, meaning his shot-stopping stats aren’t great. However, his passing style is very modern. He has the third-highest pass accuracy in this sample with 89.44%. The 22-year-old also has a lateral pass tendency of 44.74% and a short/medium pass tendency of 63.67%, showing his reluctance to go long.

It is important, in the modern game, for a goalkeeper to be alert and active from his goal-line. Being a ‘sweeper-keeper’ helps the defence hold a high line without the threat of players getting in behind. The below graph will measure each goalkeeper’s percentage of crosses stopped and the number of defensive actions outside the penalty box per 90 (OPAs) to determine the best sweepers in the top five leagues. 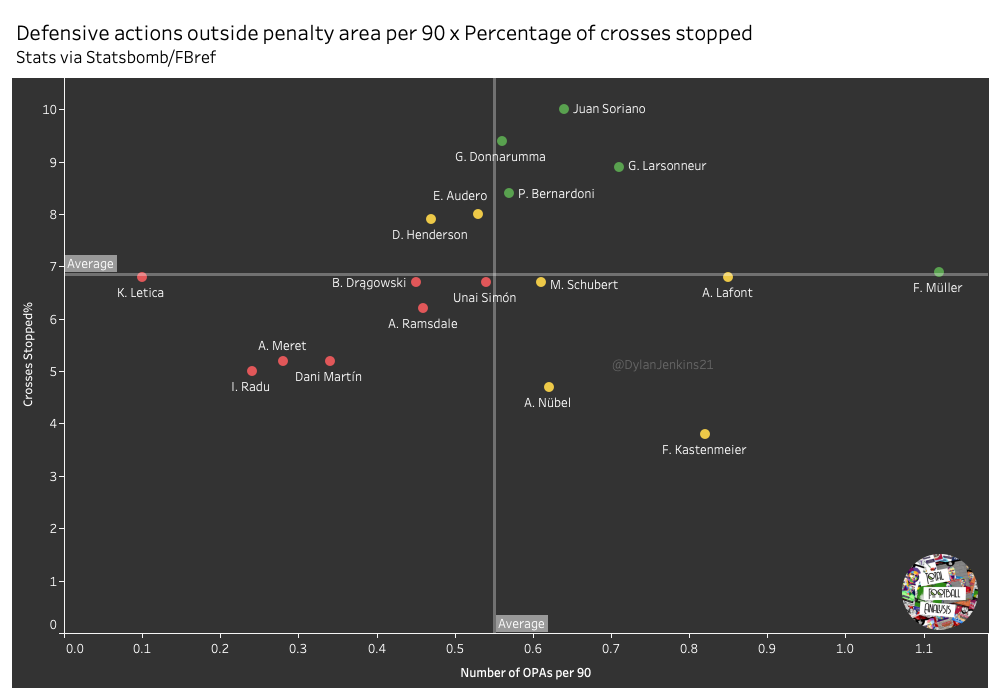 The Frenchman Larsonneur can also be put into the category of ‘sweeper-keeper’. He’s very frequent in terms of defensive actions outside his box with 0.71 per 90 and he’s stopped 8.9% of crosses he’s faced. Donnarumma also performs well with 9.4% of crosses stopped and 0.56 OPAs per 90.

Recent Angers signing Paul Bernardoni is the last new name in this analysis. He has only appeared well in a few areas so far. His ability to come off his line and help his defence is very impressive. The Frenchman has stopped 8.4% of crosses into his box and makes 0.57 OPAs per 90.

After analysing all goalkeepers in this sample in a range of different areas, we can now compile a shortlist of the best overall u23 goalkeepers playing within the top five European leagues. We have calculated how many times each goalkeeper had an above-average stat in every graph. 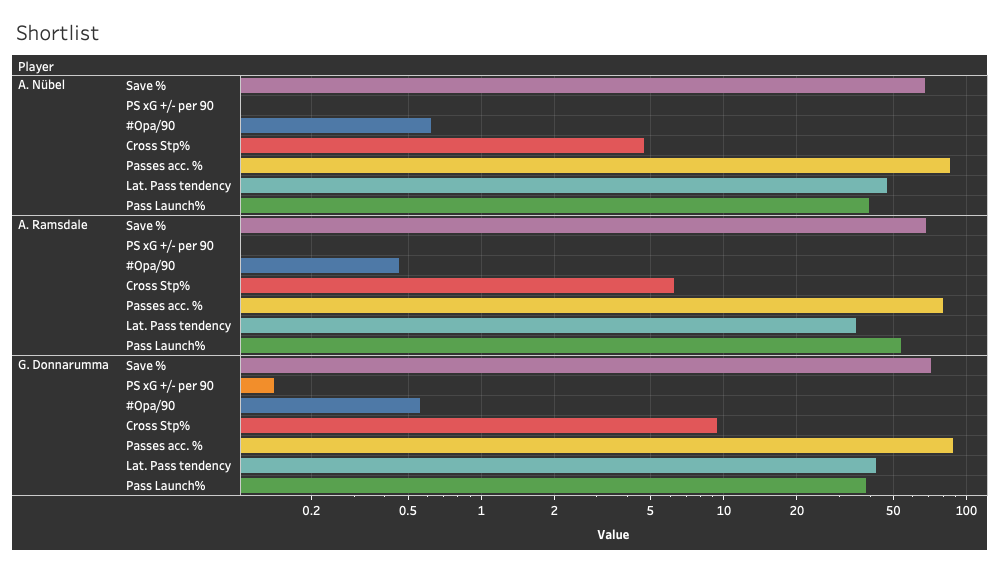 The first goalkeeper on the shortlist is Bayern Munich’s new signing, Alex Nübel. The 23-year-old was signed as Manuel Neuer’s replacement. But since then the Bayern captain has signed a new deal keeping him there until 2023, leaving Nübel in a tricky situation. The young German is a clear leader, captaining Schalke until his agreement to move to Bayern meant he got stripped of the armband. In what was a disappointing season, Nübel shone through for his team with a consistent amount of top-class performances. He has a very good passing style. Preferring to pass shorter and giving the ball laterally to his teammates whenever possible. He’s very active off his line, but not outside of his box, opting to let his defence deal with balls over the top whilst he likes to intervene with crosses. He has a better-than-average save percentage while facing a below-average amount of shots. He has, however, underperformed this season with a minus PS xG +/- value, but this could be put down to his mind already being at Bayern. It will be interesting to see whether he will look to be loaned out or bravely battle Neuer for the number one spot.

The next two players on the shortlist are much more well-known. After being relegated with Bournemouth, Aaron Ramsdale recently signed for Sheffield United, replacing fellow Englishman Dean Henderson. Ramsdale broke into the Bournemouth team at the start of the 2019/20 season and has impressed ever since. Though he isn’t the most comfortable with the ball at his feet, he is still able to help his team out from the back. However, this won’t be a problem at his new club as they prefer a more direct approach. Similarly to Nübel, Ramsdale is active off his line, but not out of his box. He has a high number of aerial duels and exits, but not defensive actions outside of the box. Ramsdale’s shot-stopping has been excellent this past season. Although he has a PS xG +/- value of 0, he faces a high amount of difficult shots, but still has a very respectable save percentage. It will be interesting to see whether the Englishman can replicate his form at his new club.

The final name is, and rightly so, one of the biggest prospects in world football. Gianluigi Donnarumma, at the age of 21, has already played 178 league games for AC Milan. Making his debut at just 16-years-old. The Italian international has been described as a ‘complete’ goalkeeper, and his stats certainly back this up. He isn’t a standout with his passing, meaning that he is as comfortable going long as he is passing short. He likes to help his defence out by claiming a high percentage of crosses and making a lot of defensive actions inside and outside of the box. Although he faces shots below the average difficulty he still saves more shots than he’s expected to. Evident in his high PS xG +/- value. Donnarumma also has the fourth-best save percentage in this sample. With a very disappointing sixth-place finish with AC Milan in the 2019/20 season, it will be interesting to see whether he looks to move to a more elite club.

This data analysis has proven that young talent is abundant within the top five leagues, and it is now clearly being used as a great market for young goalkeepers. More and more are getting a chance in the first-team earlier on in their career. This means they are more likely to better themselves later on in their careers.