Atalanta turned out to be one of the 2019/20 season surprises, not only in Serie A, where they conquered the third place but also in UEFA Champions League where they unexpectedly reached the quarterfinals and were close to disqualifying Paris Saint-Germain out of the competition.

Going down from 1-0 to 1-2 in the last couple of minutes of the game against PSG didn’t manage to overshadow their achievement but it did underline the defensive vulnerabilities that were evident throughout the whole campaign.

Whilst they became record breakers when it comes to goals scored for one season in Serie A, their three-man defensive line had some struggles keeping up with the astonishing attacking performance.

Despite being considerably solid for a team playing with a back-three, their defensive mistakes, particularly when it comes to closing out space, are the reason for achieving even better results.

While the team has built a strong connection between the lines and their defenders are rather solid, Atalanta lack depth at the centre-back position, which has proved crucial in times of exhaustion and injuries.

In this recruitment analysis, we will use data analysis to find a suitable centre-back option for Gian Piero Gasperini’s strategy. We will then analyse the best three proposals and explain how they could fit the team’s tactics.

Before diving into their current centre-back options, it is important to point out Atalanta’s most frequent defensive mistakes. The team are vulnerable when defending against teams that match their attacking strategy. Their actions during defensive transitions are not always accurate, especially when it comes to closing out space and covering the attackers properly.

They often struggle defending against teams that overcommit players to the attack and use skilful players for short pass combinations in the advanced areas. The reasons for this are two: failing to avoid individual errors and lacking spatial awareness when aggressively pressed.

Despite having five central defenders in the squad, Gasperini relies heavily on three of them who are his regular starters both in Serie A and Champions League. Berat Djimsiti, José Luis Palomino and Rafael Tolói have proved as the best fits for the team’s current strategy, while Mattia Caldara and Boško Šutalo serve as plan B options.

All three regular starters are among the best-rated players in the squad, with Palomino proving to be irreplaceable both in defence and in attack at this point. Not only he managed to stop some of the best attackers in both competitions using his tight marking and well-measured actions, but he also served as an additional threat during attacking set-pieces where his aerial abilities were very important.

Djimsiti and Tolói are the ones responsible for building-up from the back and starting Atalanta’s attacking actions early on. While the youngster Šutalo showed a glimpse of potential, he and Caldara failed to impress and can’t be considered as adequate replacements.

Having in mind what qualities are needed for being a good fit to Atalanta’s tactical approach we are moving to our data analysis which will allow us to find possible new additions for the team.

To start our data analysis, we had to extract a list of players matching the profile we think would fit Atalanta. We started with selecting centre defenders only from the top five leagues in Europe since we were looking for someone who has played on a high level and could easily adjust to playing in two big competitions.

After that, we filtered them to have more than 1500 playing minutes in the 2019/20 season, since they need someone with enough experience who can meet the expectations and turn into a regular starter.

Then we had to consider Atalanta’s recruitment history and current financial situation. Having in mind that their record signing is Luis Muriel for 20.10M and that they might want to invest in other positions too, we set a market value limit of <25M. We also picked the players to be in an active age between 20-28 years old.

Since the list of players was too long, we removed the ones that don’t fit the profile based on their data performance, which led to our final list.

To pick out final shortlist we placed all players in some scatter plots in aim to see their performance in certain metrics that we think are important for the centre-back position. 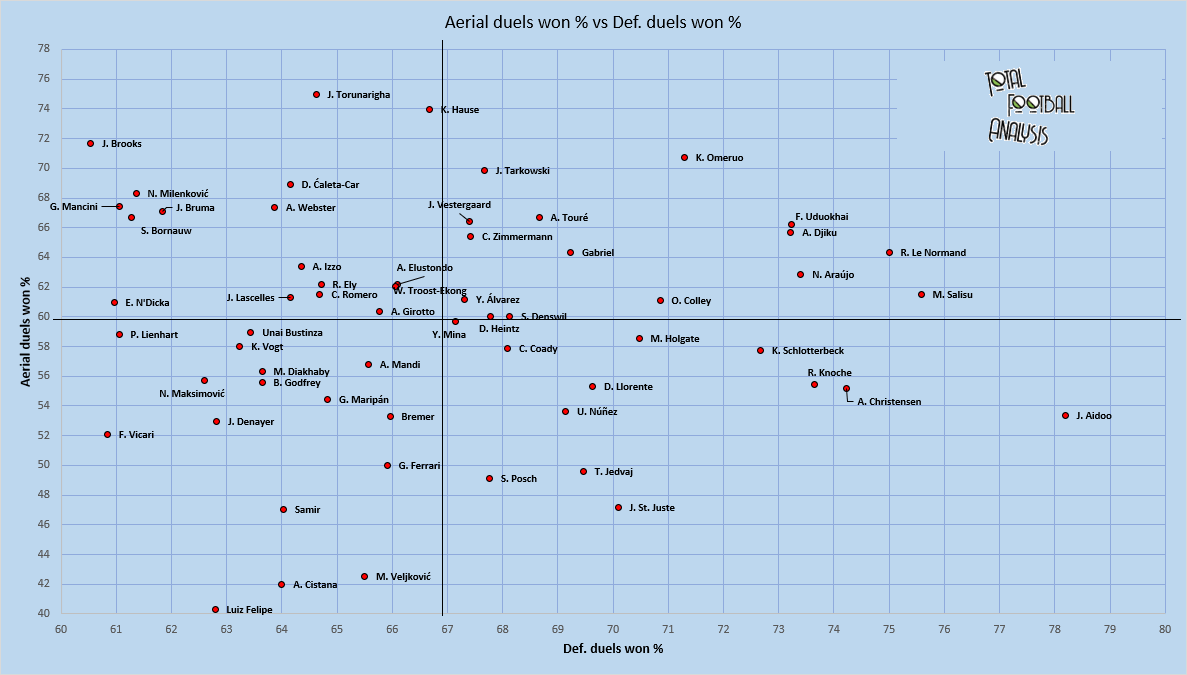 Firstly, we placed their aerial duels won % next to their defensive duels won % to see what their performance under pressure is and are they reliable when they need to dive into challenges.

There are quite a few players that have managed to balance out their performance and contribute successfully both in the air and on the ground. For Atalanta, Palomino and Djimsiti have quite solid aerial presence and the team rely on them a lot, both defensively and in attack. That’s why we’re looking for a new addition with a high winning percentage since the aerial contribution could be beneficial for retaining possession all over the pitch and for defending and attacking in the box.

When it comes to defensive duels, their statistics are around the average, which is why we are looking for someone with better data performance and more successful actions in 1vs1 situations. This could increase their stability and allow them to gain confidence against more skillful players. As we could see Joseph Aidoo from Celta Vigo has an impressive winning percentage (78.19%). 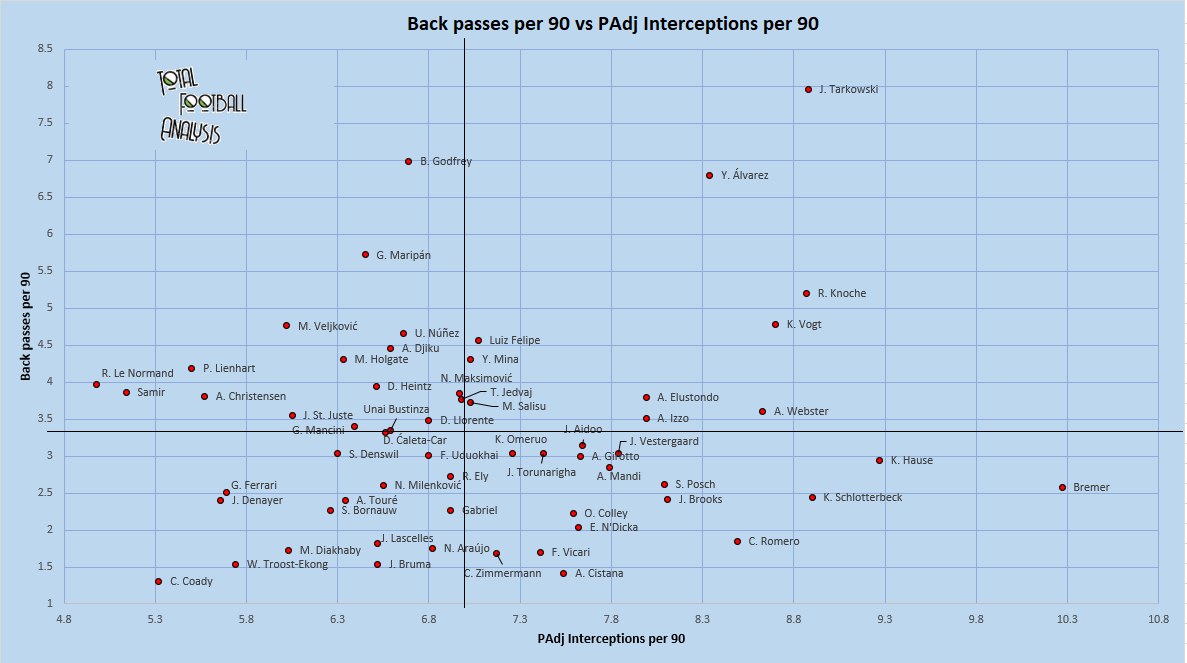 Next, we looked into their back passes per 90 and possession adjusted interceptions per 90.

The back-pass frequency is very dependent on the team’s style of play and the opposition’s pressing strategy, but again could show the players’ performance under pressure and do they prefer sending the ball back and playing safe or they aim to keep the possession and advance the ball. In this scatter plot, we’re not aiming for the players in the first and the second quadrant, simply because sending the ball back and inviting pressure wouldn’t be beneficial for Atalanta with their current strategy. That’s why they need someone who contributes to the ball progression and manages to bypass the press, hence sends fewer back passes.

When it comes to PAdj interceptions, the higher the frequency, the better support a player provides to his team. Atalanta need a player that is willing to intercept the ball, since this will be helpful against speedy attacks where the defenders could be forced into individual mistakes should they dive into challenges. From the plot above we see that Torino’s Bremer performs 10.27 PAdj interceptions per game on average which is an impressive stat. 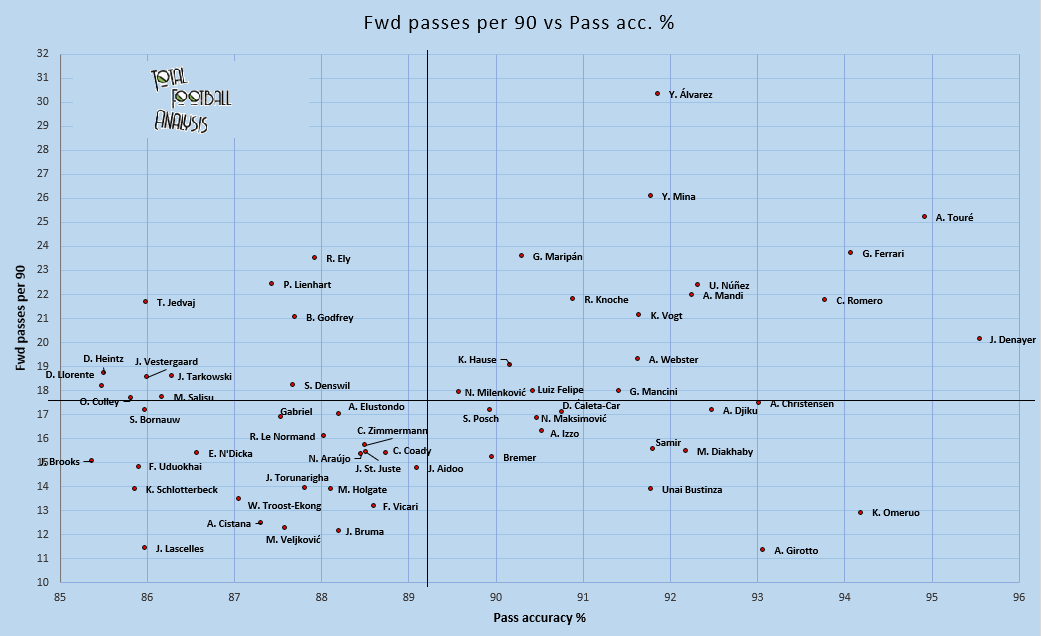 Lastly, we looked into the players’ passing abilities and their contribution to the ball progression by placing the forward passes per 90 next to their overall passing accuracy percentage.

This shows if the players try to bypass the press and progress the ball and also if they do it accurately enough. It is common for the centre-defenders, especially the ball-playing ones to have higher accuracy percentage. From Atalanta’s defenders, only Djimsiti has higher success rate (89.8) than the average above, meaning they could benefit by someone with better accuracy, since their quick short-pass combinations need to be executed with precision to perform even better in attack.

The forward passes per 90 again show us their contribution to the build-up and if they succeed in bypassing the press and distributing the ball further.

We created out shortlist using the plots above and analysing the best performers while also considering their current teams’ strategies and if they have any similarities to Atalanta’s approach.

Hause is playing as a centre-back for Aston Villa and his current market value is €6.5M. He performed solidly throughout the 2019/20 season, despite his team’s defensive issues. His strong aerial presence and ability to intercept the ball are what makes him a good fit for Atalanta. He contributes to 7.79 aerials per 90 with impressive 73.97% suceess. This could be beneficial for Atalanta in all phases of the game both for retaining possession but also for providing indirect set-piece threat. His 9.27 PAdj interceptions per game will give them confidence and help them counter more frequently which will increase their attacking efficienty too. Hause has some experience in a back three formation which should help him adjust easier.

Torino’s 23-year-old centre-back Bremer performs 10.27 possession adjusted interceptions per game which is a very impressive number. His defensive abilities and awareness could be of help for stopping the opposition attacks while still in the midfield area, avoiding allowing pressure in their own half. His passing could help the team in the build-up and he could also contribute to the attacking actions due to his smart movement and aerial performance during attacking set-pieces. His actions in the box often result in headshots and eventually goals. Torino’s most used formation was 3-4–2-1/3-4-1-2 which makes fitting to Atalanta’s back three much easier task. His current market value is €3.5M.

Touré is not limited to the centre-back position. He has played both as centre back, right-back and wing-back for Eintracht depending on their formation and approach. Thanks to his experience on both positions he contributes equally well to the defence and the attack. His passing abilities are strong (94.92% pass accuracy) which could help Atalanta in the ball progression, but he could also join the advanced areas and cross the ball (4.15 crosses per 90). What makes him a valuable addition is his ability to recover the ball, especially in the more advanced areas. He frequently aims to recover the ball (9.62 recoveries per game) and quickly counter, using his dribbling abilities. His current marker price is €6.5M.

While finding another centre-back addition won’t be the solution to Atalanta’s defensive vulnerability, it will definitely improve their performance. They mainly need to work on their defensive movement and structure as a whole, but finding the right player for the defensive line could increase their confidence on and off the ball immediately. All of the players in our short list could be beneficial for the team and offer good value for price.