The UEFA Champions League quarter-finals pitted two underdogs against each other in Lisbon as La Liga side Atlético Madrid met Bundesliga team RB Leipzig. It was eventually the German side who would progress to face Paris Saint-Germain in the semi-finals of the competition as they again upset the odds to secure a 2-1 win over their Spanish counterparts.

Many regarded that Julian Nagelsmann outsmarted Diego Simone in a battle which relied heavily upon the tactics of both coaches. It was Leipzig who took the lead, with Spaniard Dani Olmo scoring a neat header after an even first-half. After that, Atleti did react, with substitute João Félix converting from the penalty spot having been brought down. Another substitute, Tyler Adams, would eventually score the winner as his effort from the edge of the box was deflected beyond Jan Oblak and into his own goal by Stefan Savić.

This tactical analysis will consider what happened in the game to decide the result, providing analysis of the tactics of both Atlético Madrid and RB Leipzig. 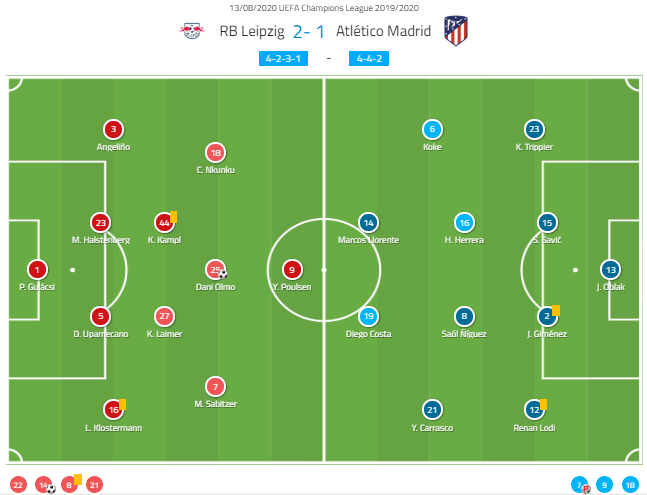 Simeone opted to stick to his usual 4-4-2 shape and fielded Hector Herrera as the fourth man in midfield as Thomas Partey was not yet match fit. In attack, Diego Costa and Marcos Llorente were preferred, while Felipe was left on the bench as he too continued a recovery from injury which has seen his game time limited since the restart of La Liga. Atlético were notably also without winger Ángel Correa, who had tested positive for COVID-19 and did not travel to Lisbon with the rest of the squad.

Nagelsmann was forced to contend with the dilemma of not having Timo Werner available to him for the first time since his move to Chelsea, with Yussuf Poulsen taking the starting role in the front line. Dani Olmo and Christopher Nkunku also brought in to provide a second offensive line in the offensive midfield area with greater pace and fluid movement which would prove to be decisive.

One approach which turned out to be decisive was the way in which Leipzig opted to overload central areas. Atlético’s narrow and low defensive block is a famously difficult one to break down. Liverpool had come up against this challenge in the previous round, finding themselves dominating possession but unable to find a way through. They took to the flanks to try to stretch the game and open up spaces in between the lines, but it was an ultimately unsuccessful approach which effectively only served to build greater frustration.

Nagelsmann had clearly been watching that tie in his preparation and instead opted for the opposite approach and looked to flood central areas in the pitch. This was easy to do given the way in which Leipzig shifted formation, but regularly had at least four players in central areas in midfield and attack. From these areas, there would be two choices, to spread play wide and look to capitalise on the gaps which had opened up, or to instead shoot from central areas.

Here, we can see the build-up to Leipzig’s opening goal. Leipzig deliberately positioned three players between the midfield and defensive lines of Atlético Madrid, with those players then intermittently coming deep and moving to the left in order to pull the Atlético line towards that side.

The result was that Atlético lost their midfield structure and were caught ball-watching with all four midfielders and José María Giménez caught in a small space. That meant that, particularly with Giménez pulled out of position, space opened on the right with Renan Lodi drifting centrally to cover, allowing Konrad Laimer to shift the ball to Marcel Sabitzer to provide the cross to Olmo, who was capitalising on the gap that Giménez had left behind as he stepped up.

When it comes to shooting, we can again see that almost all of Leipzig’s attempts on goal came through central positions, often from distance. This reflected the way in which Leipzig retained the ball, only shooting when presented with no other opportunity. With more shots from outside the box than in it, it also reflected their desire to test Atleti, not allowing them to sit deep and rest on their laurels but rather to challenge them to step up, consequently leaving spaces in behind to exploit.

When looking at Atlético Madrid’s offensive strategy, much of this comes through wide areas and the full-backs pushing on to provide a direct threat. However, Leipzig kept this threat silent throughout, particularly on Atlético’s right-wing where Kieran Trippier had a torrid night and struggled against Angeliño.

Usually, Trippier would look to join attacks late on and explode into space, bursting forward to provide a cross. However, with the back three system in place, Angeliño was very quick to step up and block off Trippiers run or force him to the touchline as soon as the ball was shifted to the right. The result was that Trippier could not advance, limiting him to a single attempted cross, only the second time since October that he has registered so few deliveries into the box.

This is also reflected in the passing map, which reflects the way in which Atlético’s attacking play, especially in the first half, was almost entirely down the left. Here, Yannick Ferreira Carrasco was supported by Renan Lodi and so when Lukas Klostermann stepped up, the support would provide an overlapping run to distract another defender and create more space down the left side.

Atlético Madrid have regularly struggled when facing a back three in recent years under Simeone. Against the likes of Pablo Machín and his three-man defensive units and even against Barcelona boss Quique Setién when he was at Real Betis, Atlético simply could not break down a three-man defensive unit. Without much pace in their centre-forward options, this set-up controls the wide threat where their pace is focused while marking strikers out of the game.

Leipzig did this in a highly effective way. Dayot Upamecano, in particular, was impressive as he controlled Costa in a physical battle, refusing to be turned or physically dominated. Llorente’s role to run in from deeper positions was also well-handled, with the three-man defence denying him space in central positions, instead forcing him to move out into wider areas where he would pose less of a threat.

What was interesting from Leipzig was the way in which they rotated and transitioned this defensive shape throughout the game. At some points, they were playing in a back four, with Klostermann stepping into a midfield role from the right of the back three. This set-up allowed Leipzig to focus on overloading the central areas in greater numbers without compromising the defensive system. By sitting in a deeper, defensive midfield position, he was able to be involved in that offensive play but could almost immediately tuck back into a back three should possession be overturned.

The most expensive player to take to the field was substitute Félix. Back in his hometown, the pressure was on the Portuguese forward to produce the goods and lead Atleti to success. Unsurprisingly, he was not selected in the starting line-up. While some fans were surprised by this selection choice from Simeone, it reflected his selections in the final weeks of La Liga. Without Correa, Félix and Vitolo were the only two players available from the bench who could offer an impact change in the game by coming on to bring pace and a more direct style, akin to that of Carrasco on the left flank.

When he did come on, his impact was immediate. While Carrasco and Llorente had been attempting to transition the ball through dribbling, it had not been a successful approach. Between the two of them, 10 attempts led to just three successful dribbles. Once Félix came on, he completed all four of his dribbles with one of them even leading to a penalty which he would then convert.

This was so important because much like Leipzig had disrupted Atlético’s structure and shape, this did the same. As Félix ran at players, others would be drawn towards him to cover or to take him on directly. This would then open up space for others. As can be seen here, the one-two set up Félix to move into the box, but had he not done so, he could have sprayed the ball wide to Lodi who was overlapping to take advantage of the additional space created which Atlético had failed to create before the substitute’s introduction.

What is clear from this analysis is that this game was a hard-fought tactical battle which emerged with Nagelsmann and Leipzig as the winners, ahead of Simeone and Atletico Madrid. While they had a slice of fortune in how the winner was converted and a draw would perhaps have been the fair result, particularly as Atlético grew into the game following the introduction of Félix, they were the side who looked most comfortable and executed a clear tactical game plan well.

With the three-man defensive set-up, Leipzig were able to nullify the Atlético attack effectively and would then transition into a central overload which allowed them to unblock the defensive structure of Simeone’s team. That tactic would prove decisive, just as Liverpool’s failure to do so successfully had done in the last round. Through this approach, Nagelsmann outsmarted Simeone and deservedly earned himself a place in the next round, while Simeone was left to rue the lack of flexibility afforded to him by his tactics and his shallow squad.