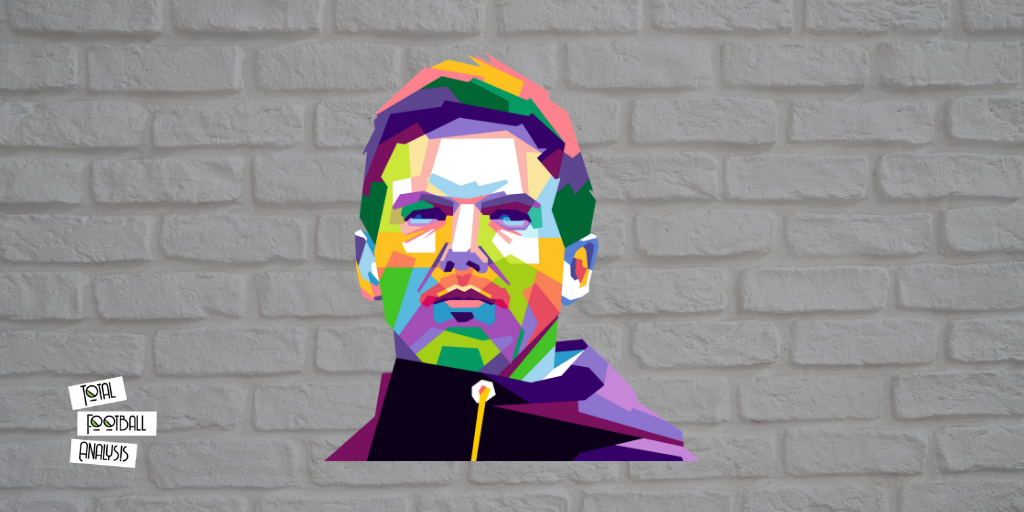 With the possible exception of Marco Rose of Borussia Monchengladbach, there are few coaches who will enter 2020 on as much of a high as Julian Nagelsmann. The current RB Leipzig coach is, of course, no stranger to the limelight as he attracted considerable attention when appointed as the coach of TSG Hoffenheim when he was just 28-years-old. Those who were concerned about his lack of top-flight experience were soon proven wrong as the young German coach created a game model that allowed Hoffenheim to challenge consistently for European qualification.

The last two seasons have seen constant speculation as to the next move that Nagelsmann would make in order to further his coaching career. Indeed, there was a feeling in Germany that Bayern Munich would move for the young coach when they moved on from Carlo Ancelotti. Instead, and perhaps wrongly, Bayern chose to go down an alternative route. The speculation was ended at the start of the 2018/19 season when Nagelsmann announced that he had agreed to take over the reins at RB Leipzig for the 2019/20 season. Such was the regard in which he was held at Hoffenheim, however, the club was content to have Nagelsmann continue in his role to see out the season.

At the time of writing, RB Leipzig are sitting at the top of the Bundesliga table and with both Bayern Munich and Borussia Dortmund enduring difficult campaigns, there is a genuine sense that this could be the season that sees the side from the East of the country emerge as champions. There is no doubt that Julian Nagelsmann is one of the coaches we need to keep an eye on in 2020.

What makes his game model so successful? This tactical analysis will explain all.

As we have already mentioned above RB Leipzig, at the time of writing, are comfortably at the top of the Bundesliga table. As ever in football, however, it is important to look beyond that and to consider what the underlying statistics can tell us about Nagelsmann and his preferred playing style.

To even come close to understanding that playing style though we have to understand the Red Bull playing methodology. Since the drinks empire first took over Salzburg and then RB Leipzig, there has been a clear playing style with both sides playing with a high tempo both in and out of possession. They attack vertically through quick forward passes and press aggressively when out of possession. What is interesting is that this season, under Nagelsmann, we have seen RB Leipzig display more tactical versatility with the coach switching between three at the back and four at the back systems, depending on the strengths of the opposition, within these systems though the tactical concepts remain the same.

The key in the attacking phase comes in quickly playing forward to create chances. So far this season RB Leipzig are averaging 14.57 shots per 90 minutes and 2.63 goals per 90 minutes. They are also making 85.41 progressive passes per 90 minutes. All of this shows that Nagelsmann has adapted his game model to perfectly suit the Red Bull DNA. At Hoffenheim, under Nagelsmann we saw a similar style of vertical attacking football. Now with better players at his disposal, we are seeing the next evolution of this game model.

Nagelsmann is not a coach who favours possession above all else. This is evident in his vertical attacking style and so far this season RB Leipzig are averaging 51.4% possession, 7th in the Bundesliga. They are conceding 9.31 shots per game which is the third-lowest in the Bundesliga and these shots tend to come from areas that are less than optimal for the opposition and often from outside the penalty area.

Let’s take a closer look at some of the tactical concepts in action.

Obviously, there will be differences in how RB Leipzig build up from the back in the attacking phase whether in the four at the back or three at the back system. These differences are unavoidable given that the positional slots occupied in the two systems are different. The concepts that underpin these systems will, however, remain the same.

Principle amongst these concepts is the idea of rotation. The fullbacks, or wingbacks, will tend to move relatively high in the first moments of the build-up phase. This is a simple tactical mechanism designed to provide width but to also force the opposition to defend in a wider block to cover this threat. This, in turn, creates space centrally that RB Leipzig can exploit in order to progress the ball.

Here we can see a situation with RB Leipzig playing out from the back. As the left-back moves high, this creates space on the left side that can be used to progress the ball into the opposition half of the field. As the central midfielder moves into that space the ball is progressed securely. From this point, we will then see another vertical pass either to connect with the fullback or into the feet of an advanced forward player.

These rotations enable the key concept that we see from Nagelsmann. That is verticality in possession. This simply means that the ball will not be cycled from side to side aimlessly along the defensive line. Instead, for each receiving player, there is one clear priority and that is to look to play forward. Obviously, there are times in which there will be no clear vertical pass open. In this instance, the ball will be moved across and the next player will look for a vertical pass.

In this example, we see the combination of rotation and verticality together. As the ball moves out we see RB Leipzig move the ball at angles through the press of the opposition and then beyond the covering midfielder in a deeper position. As the ball moves forward we see the rotation from the centre out to the wide area. This rotation takes the final receiving player out from the cover shadow of the midfield player from the opposition and allows him to receive the ball in space.

The importance of the double pivot

Whether setting out in a back four or a back three there is still one aspect of the tactical system which is the use of a double pivot at the base of the midfield. This is important as these two players provide security when RB Leipzig are in the attacking phase but they also screen the defensive unit when the opposition are attacking.

In any successful team, there has to be a balance between attack and defence and vice versa. Very few teams will simply attack with all of their resources without any thought of securing themselves against the counter-attack. Look at the Manchester City team of the last two seasons and we see that Pep Guardiola, one of the greatest coaches of all time, uses a player in the ‘6’ role that will provide security against the counter.

Julian Nagelsmann has adapted to using two players in a double pivot having generally used only a single pivot whilst at Hoffenheim. In using two players in this pivot position we see the versatility to allow one to rotate into advanced positions when in possession while the other retains a deeper position.

When in possession you will rarely see these players operating on the same line as one another. Instead, they will tend to be staggered with the ball near player deeper. This allows the ball to be played into the double pivot and then played forward to the second player in the pivot, remember the importance of verticality for each player in possession. 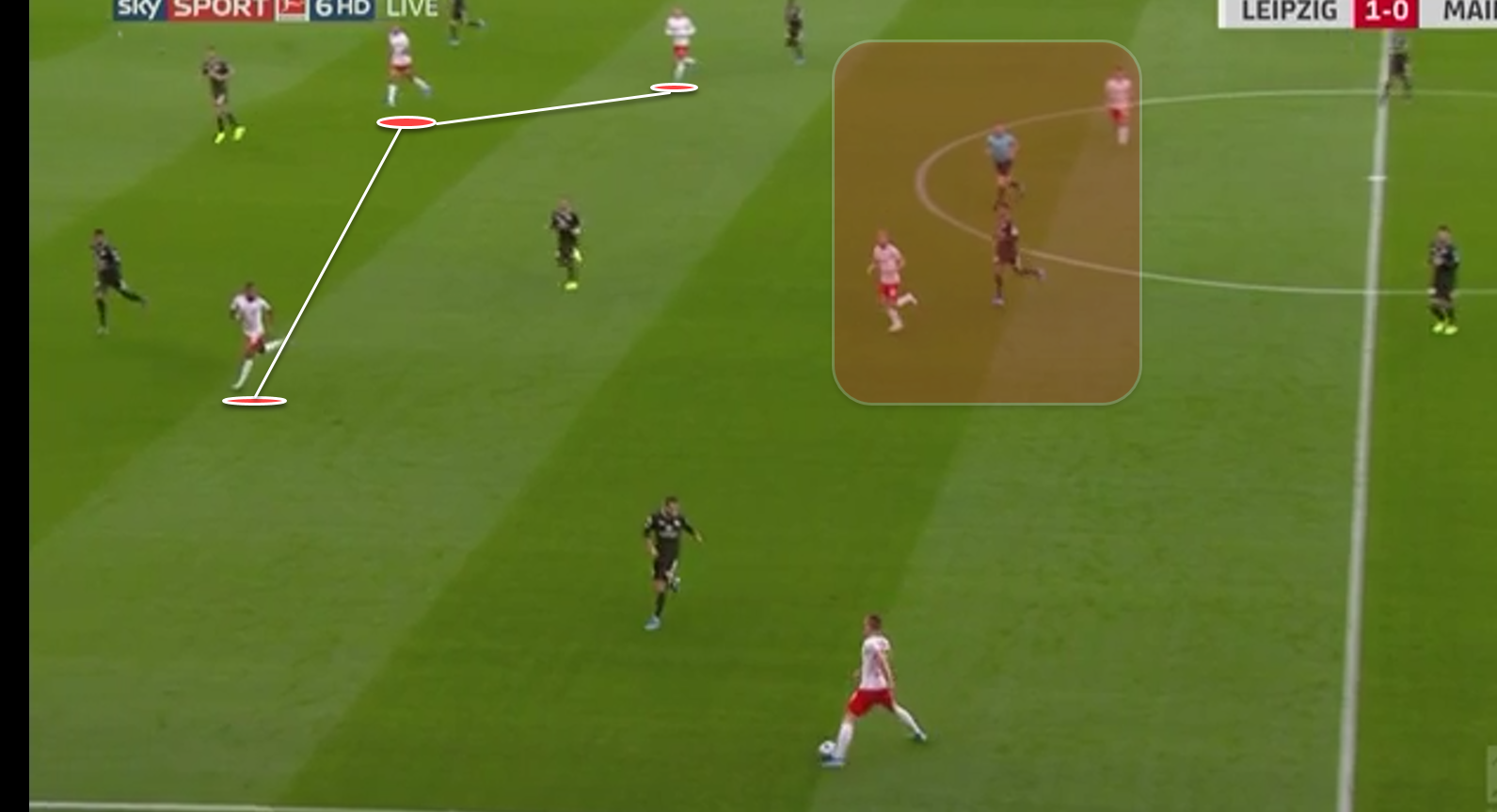 Here we see a moment in quick transition. When space presents itself we will see the double pivot shift with one player moving higher to either take possession of the ball or to move the opposition out of position. This is where the concept of rotation becomes key. As the ball near player moves out he takes a higher position and splits the space between the two defensive players. This pulls the defensive player in the highlighted area out with him and the second player in the pivot can shift across to accept possession of the ball.

As this player takes possession he is then able to look for the vertical pass to access the highest line.

Yes, we have mentioned this already above but verticality is the key tactical concept that we have to understand when studying Julian Nagelsmann and indeed when studying the Red Bull football group. This is of paramount importance and will go a long way to understanding just how talented a coach Nagelsmann is.

We have already discussed that any player for RB Leipzig is coached to look for the vertical pass when receiving the ball in the first instance. This is obviously not always possible and there will be some lateral passing but this is designed only to move the opposition out of position to create the vertical passing lanes that will allow the ball to be progressed forward.

We regularly see attacking players taking up positions between the lines of the opposition and allowing the vertical pass to be played into dangerous spaces.

In the final third, in particular, we will often see RB Leipzig overload the centre of the field before playing quick vertical passes that bypass the opposition defensive block. This is the reason that we see them creating so many opportunities on goal. They have perfected the art of playing these vertical combinations. We see this here as the ball is played centrally into the feet of an attacking player. As soon as the first pass is played the second striker starts moving and the ball is immediately played through the last line to create a goalscoring chance. 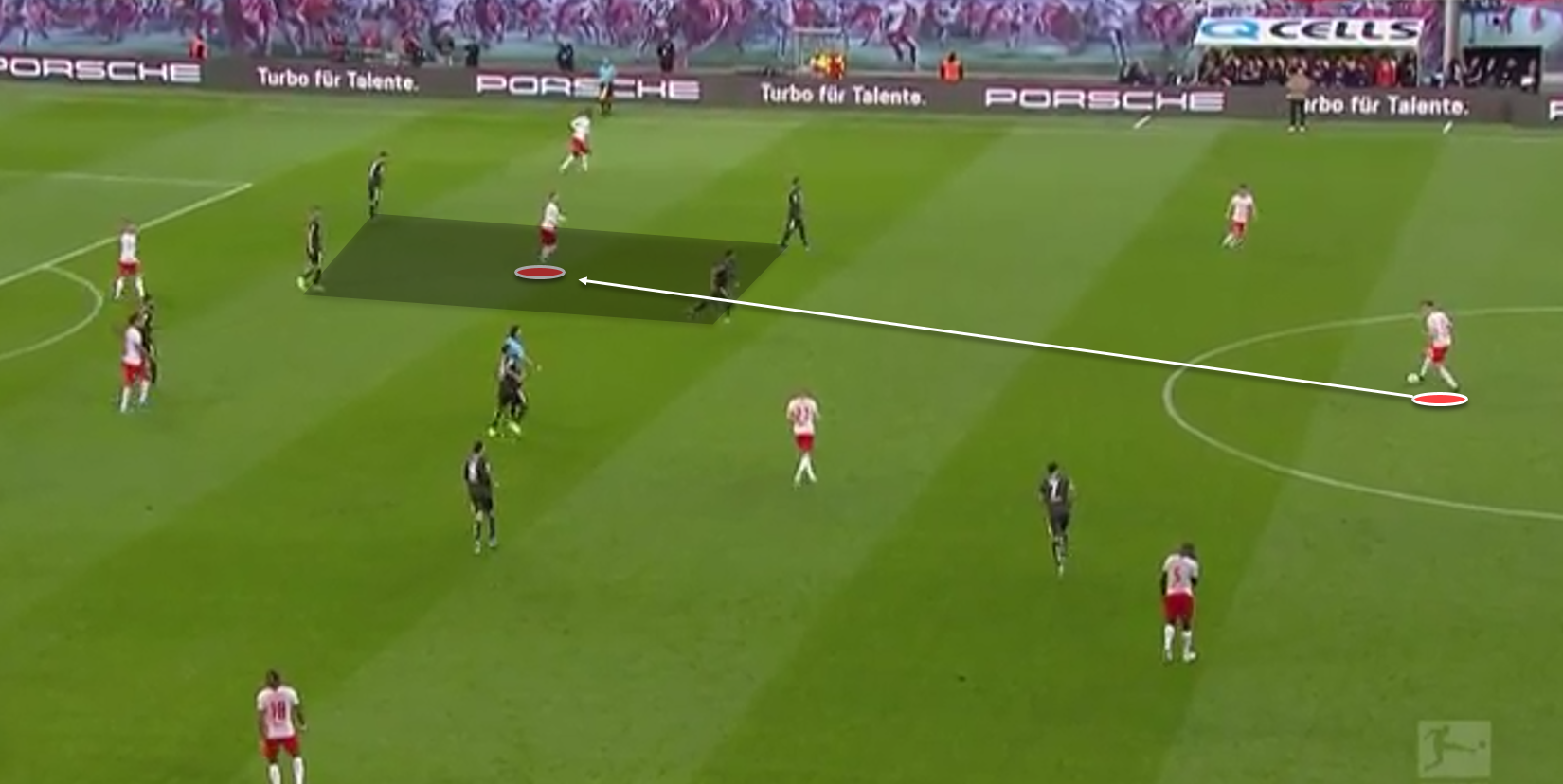 In moving so many players into high areas of the pitch when in possession of the ball RB Leipzig make it very difficult for the oppositions defensive block. Here we see the ball in the midfield and with no pressure on the ball. The pass can then be made into the player who is between the lines of opposition defence and midfield. This receiving player has then created an advanced platform from which RB Leipzig can threaten the opposition defensive line.

These advanced platforms are important as the ball progresses forward since they allow supporting players to move into advanced areas and affect the positioning of the defensive block. This then creates gaps across the width of the field that can be exploited through quick combinations.

Here we see how dangerous this verticality can be. Through three quick passes in combination and with the up, back and through concept fully on display we see RB Leipzig play through all 10 outfield opponents who are sitting in a deep block. The ball moves vertically to the forward on the highest line first and he sets the ball back to his attacking partner. The ball is then immediately played inside the penalty area and the advanced midfielder is able to move onto the pass for an easy goalscoring opportunity

The tactical system favoured by Julian Nagelsmann is not overly complicated but this relative simplicity is part of its greatest strength. The concepts within the game model are executed superbly by players who are well coached and played in areas of the field that allows them to cause problems for the opposition.

As a coach, Nagelsmann displays a clarity of thought that is rare. There is little doubt that as we enter 2020 he is one of the coaches to watch. At this stage, there are few who would bet against the young German leading RB Leipzig to success both domestically and in Europe.