Julian Nagelsmann provides a lesson in playing without possession

This past weekend saw Hoffenheim host a resurgent Bayer Leverkusen in what promised to be an interesting match from a tactical point of view. In the end, the home side ran out comfortable 4-1 winners, but as is so often the case the scoreline did not tell the full story.

In the match, Hoffenheim had only 38% of possession as Julian Nagelsmann put on a display of defensive solidity and showed how to attack through quick transitions as they pulled apart a weak Leverkusen defence. Since taking over at Leverkusen towards the end of 2018 the former Ajax and Dortmund coach Peter Bosz has impressed with the implementation of his game model, especially in the attacking phase. In this match, however, the defensive deficiencies of this Leverkusen side were exploited ruthlessly.

The key to the victory for Hoffenheim sat with their willingness to play the ball vertically in quick moments of transition. No moment of possession was wasted as Hoffenheim found the weakness in their opponents with consummate ease. 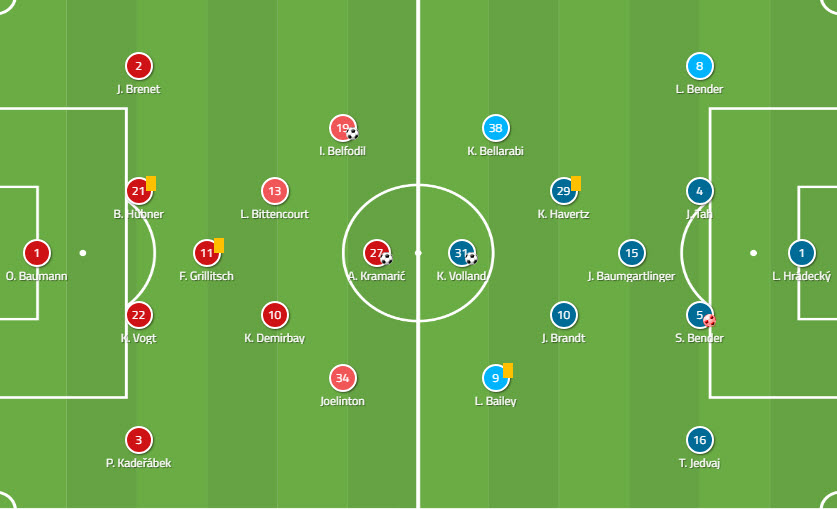 Throughout his time as the head coach of Hoffenheim, Julian Nagelsmann has shown a clear willingness to set up with different tactical structures within his game model. They will set out in a back three or a back four depending on the structures that their opponents adopt.

In this match, Nagelsmann chose to mirror the 4-3-3 that Leverkusen adopted. This would prove key in the match as Hoffenheim pressed out of possession man on man.

The biggest difference between the two sides throughout the 90 minutes lay in the way that they set up their defensive blocks when out of possession. Leverkusen were at best porous as they committed waves of players forward when in the attacking phase and then struggled to regain their defensive shape as Hoffenheim played quickly in transition.

The lack of balance in the defensive phase was a key issue that we saw from Peter Bosz when the Dutch coach was at Dortmund. There are elements of positional play prevalent in his game model when his side are in possession but out of possession, there is little in the way of an obvious structure. Hoffenheim, on the other hand, are exceptionally well coached by Nagelsmann with every player being fully aware of their roles and responsibilities when out of possession. 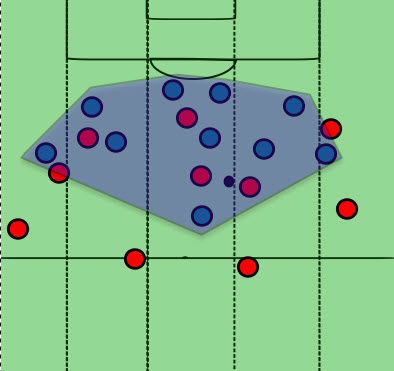 Hoffenheim defended in a compact 4-5-1 shape with the three central midfielders, in particular, dropping in to defend the space just in front of the defensive line. The roles of these central midfielders would shift depending on the specific behaviours of the opposition.

When Leverkusen were in the final third and in an established attacking moment these midfielders would look to cut off passing lanes. When Leverkusen were in their defensive third or even the middle third though, these midfielders would be the key for Hoffenheim in pressing to regain possession from their opponents. The discipline from Hoffenheim in these defensive moments as they worked back and forth in order to prevent Leverkusen from playing through central areas was excellent throughout. 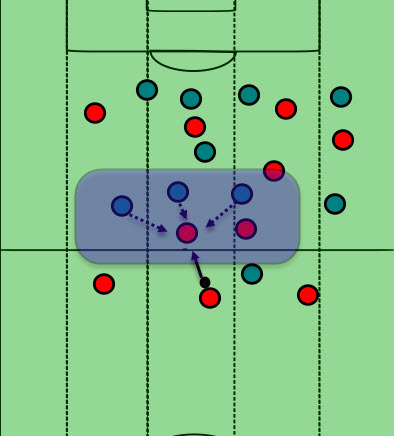 In this image we see Leverkusen looking to progress the ball higher through a simple vertical pass from the defender to the midfielder. In this instance, however, the receiving player was taking possession whilst in front of the Hoffenheim midfield and facing his own goal. This action, therefore, resulted in three Hoffenheim players pressing quickly and regaining possession. This possession then resulted in a goalscoring opportunity following a quick vertical pass.

The ability of Hoffenheim to press effectively in these areas was a key reason for Nagelsmann’s decision to mirror the 4-3-3 of Leverkusen going into this match. Having the central midfielder in a tight and compact space from where they could apply quick bursts of pressure saw Leverkusen struggle to progress the ball cleanly in quick transitions.

In these moments of attacking play from Leverkusen, we clearly saw structural issues where they looked to move players onto high lines quickly in an attempt to overload the Hoffenheim defensive structure. This can be an effective strategy if your progression of the ball is clean. Given the difficulties that Leverkusen had in playing into advanced areas though, they were caught out of possession in periods of transition over and over again.

Despite only having 38% possession we still saw Hoffenheim look to play into advanced areas of the pitch in moments of transition whenever they regained possession. This was a key aspect of the game model from Nagelsmann as he has obviously identified the fact that Leverkusen over-commit players forward early in their attacking phase.

A lot of the clear goalscoring opportunities that Hoffenheim created came from these moments as they regained possession before playing the ball vertically beyond the defensive line either into the half spaces or wide areas where they had one-on-one opportunities that could be exploited. 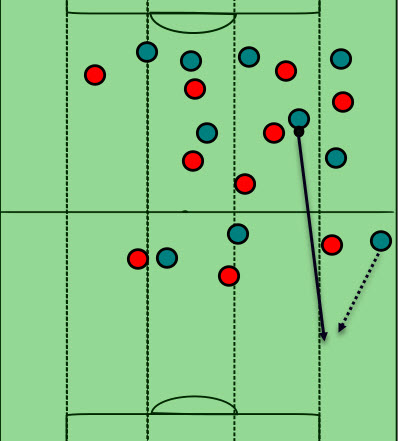 Here we see a moment in which Hoffenheim regain possession. The wide midfielder for Hoffenheim, Joelinton in this instance, has pulled out to the touchline and is isolated one-on-one with the Leverkusen right back, Lars Bender, as the ball is played through the channel beyond the defensive line. The Hoffenheim attacker is comfortably able to attack the space beyond the defensive line to create an opportunity to penetrate the Leverkusen penalty area. 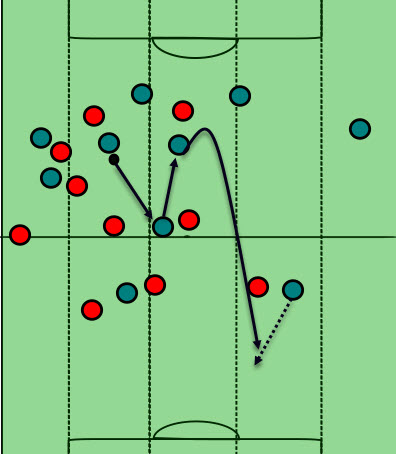 Again in this example, we see Hoffenheim take advantage of one-on-one opportunities in the final third that they can access through quick passes in transition. Having won the ball back on the edge of their final third, we see a quick tactical concept known simply as up, back and through used in order to release the attacker on the far side.

On occasion, we saw Hoffenheim in possession of the ball with Leverkusen more set in their defensive shape. Out of possession, we saw Leverkusen defend in more of a 4-4-2 shape with Kai Havertz shifting to slightly more advanced areas to support the initial press. We have already seen that Leverkusen tended to play passes to players in pockets of space in front of the Hoffenheim midfield unit. In contrast to this we saw Hoffenheim take up pockets of space beyond the lines of Leverkusen defence where they could create positional superiority. 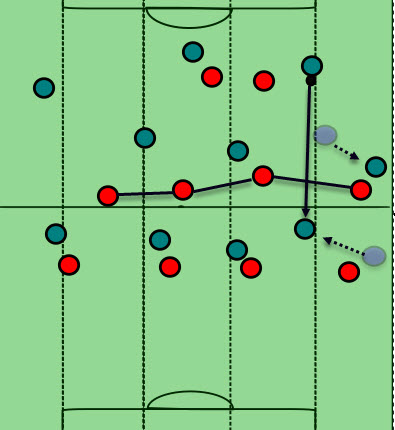 Here we see Hoffenheim looking to build out from the back. As their left back moves out to a wide position, the more advanced wide player makes the opposite movement into the half-space. This creates a moment of confusion in the Leverkusen defence, since the wide midfielder is attracted to the full-back moving out and loses his compact shape.

This, in turn, creates the passing lane that Hoffenheim can take advantage of in order to play forward. These moments of rotation to create space were prevalent throughout the match from Hoffenheim.

It was fascinating to watch this match unfold. We are perhaps now out of the era in which possession was king and passing football was key to a successful team. With that said though, it is still unusual to see a top-flight game when a side wins by three goals despite having noticeably less possession than their opponents.

Hoffenheim were extremely effective in this match at taking advantage of the structural issues their opponents were suffering from; a clear sign of a team that were exceptionally well prepared by their coaching staff going into the match.