After they survived relegation from the Bundesliga by the skin of their teeth, it was clear that Werder Bremen needed recruitments in order to help them ensure that the 2020/21 season is different from the season prior. An attacking signing was crucial with the likelihood of Milot Rashica moving away from the Weser Stadium. So far, in the attacking department, Bremen have signed Leonardo Bittencourt on a full deal and they have also signed Tahith Chong on loan from Manchester United.

The Man United youngster has not had the best start to his career and it looked likely that he was going to leave the club permanently for Inter Milan. However, he decided to renew his contract at Old Trafford and is now looking for consistent football in the Bundesliga, with Werder.

This tactical analysis, which will be in the form of a scout report, will be looking into the main aspects of Chong’s game and how he will fit in under Florian Kohfeldt’s tactics.

All statistics throughout this analysis will be from the last year in the Premier League 2, so they will likely be inflated due to the poor opposition, but this will still help show the kind of player that Chong is and what attributes he excels at.

Chong is a natural winger, who looks to dribble at the backline and wants to utilise his extreme pace. He has played 261 minutes as the left-winger and 188 minutes as the right-winger. He has also had an 18-minute stint as a left-back recently; which some believe could be a future position for the Dutchman.

Whether he is on the right or the left, Chong looks to position himself very wide, this is done so that he can receive the ball to feet and can then run at his man, or he has more space to run in behind in wider areas. We can see that he likes to stay wide through his heatmap of the 2019/20 season below.

This wider positioning allows Chong to try and maximise the use of his pace and direct dribbling. He is also an impressive crosser of the ball, which I will further analyse later in the analysis. 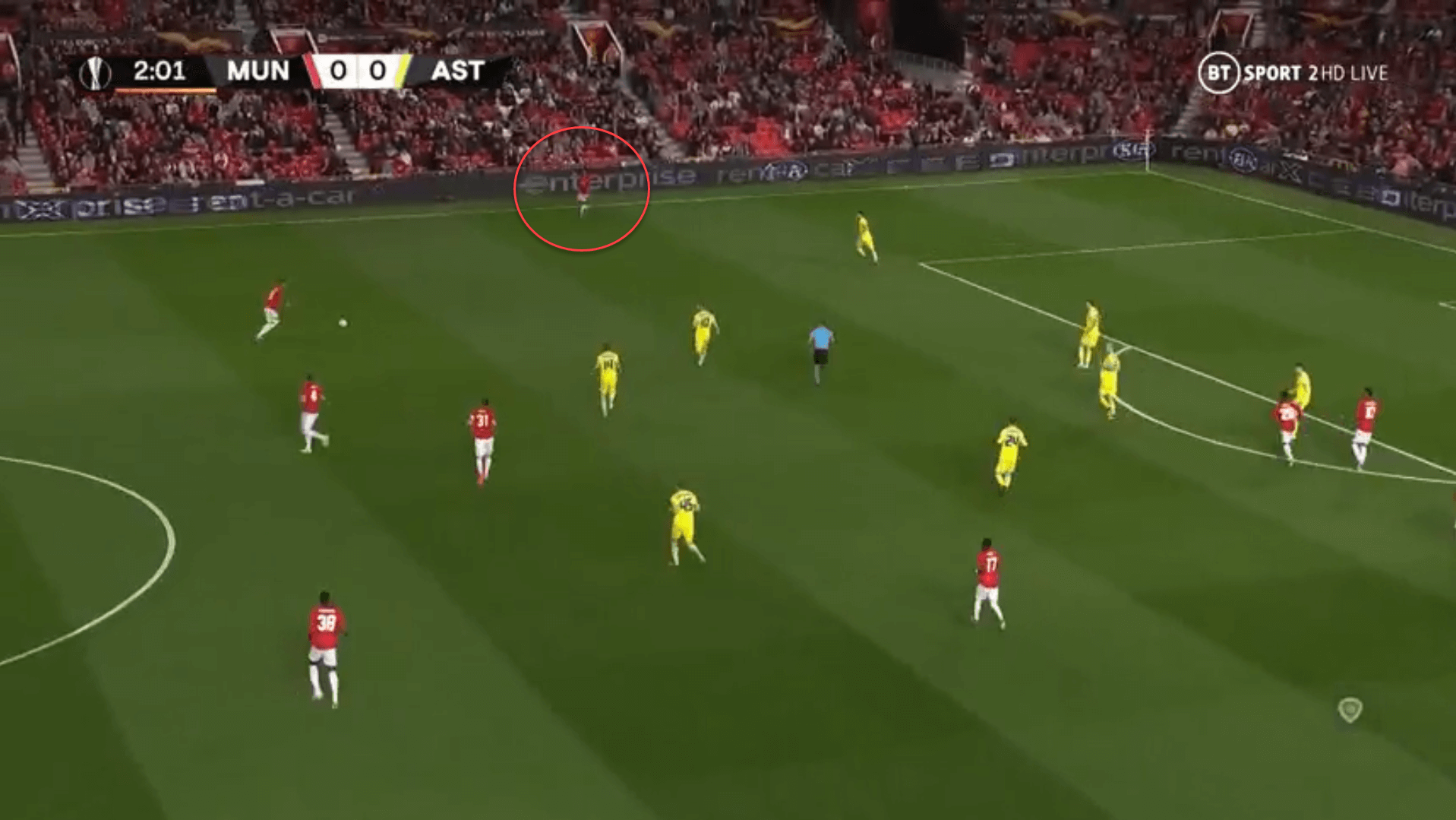 In the image above we can see the kind of positioning that Chong finds himself in when his side is in an offensive shape. Chong receives the ball by the touchline and then dribbles inside and then passes inside to Angel Gomes.

Werder have played with either a 3-4-3 or 3-5-2 27% of the time in the Bundesliga in 2019/20; if they continue to play with a back three in the following season, it would seem that Chong’s positioning suits the left wing-back position. However, his dribbling abilities are also suitable to play as a right-winger/inside forward, this is the position he played in his first two friendlies with the club.

Werder Bremen relied on their abilities in transitions last season, with 17% of their goals coming in counter-attacks. In this aspect, Chong is a good fit for the side as his pace and dribbling both are suited to transitions.

Chong looks to receive the ball in transitions and he wants to drive one-on-one against his full-back, he attempted an average of 9.33 dribbles per 90, with 4.96 of those being successful, this shows his intent to dribble against his man when he has the ball. These dribbles can also be useful in transitions to create space for a pass. 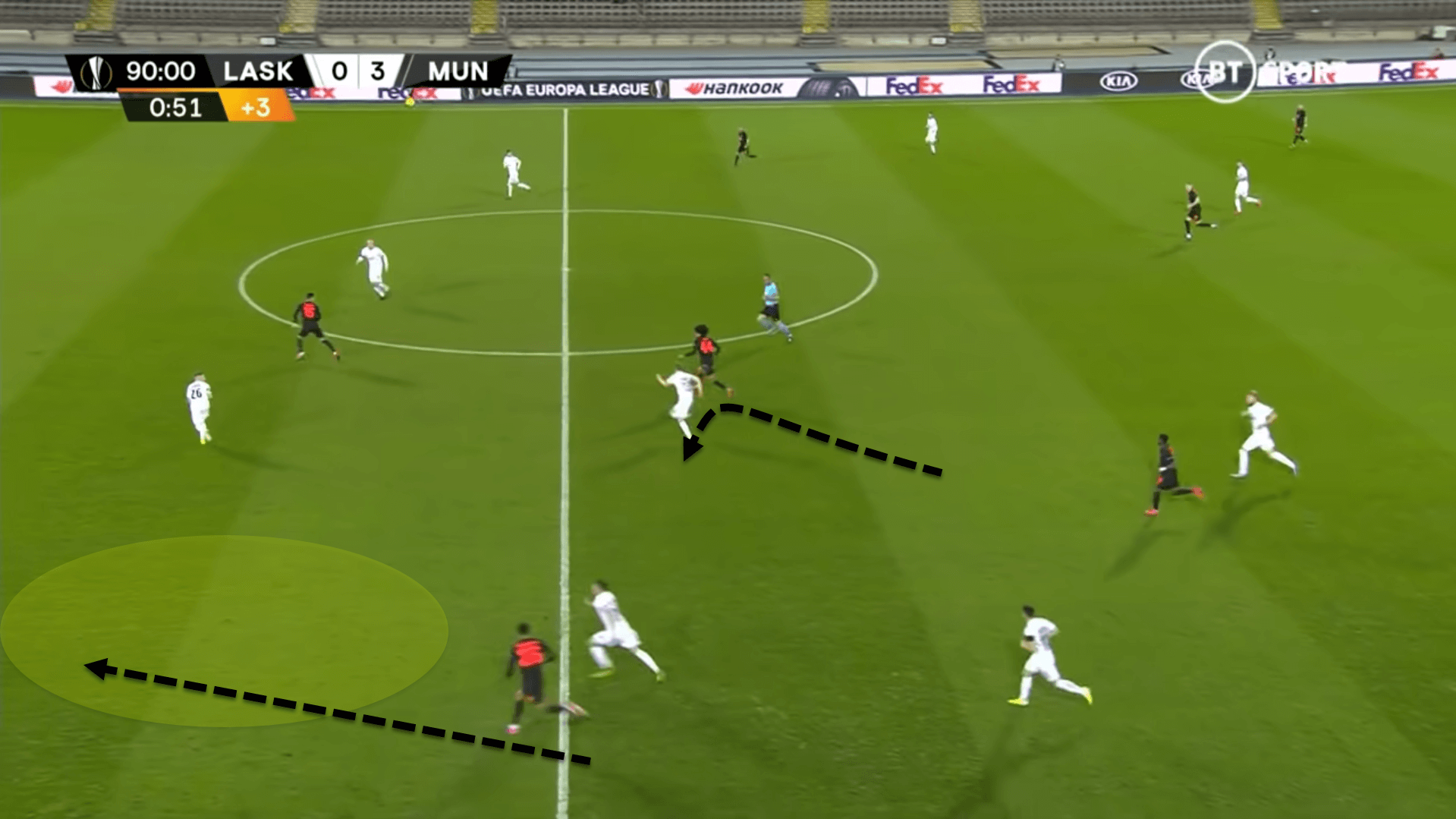 In the above example, we can see Man United in attacking transition. Mason Greenwood has just played the pass to Chong, he then drives centrally. His dribbling is then shown through a quick turn with the ball, which allows him to lose the defender for a split second so that he could find Greenwood with a through pass. Greenwood then went on to score and Chong received the assist. His dribbling technique was crucial in him being able to find Greenwood with the pass. 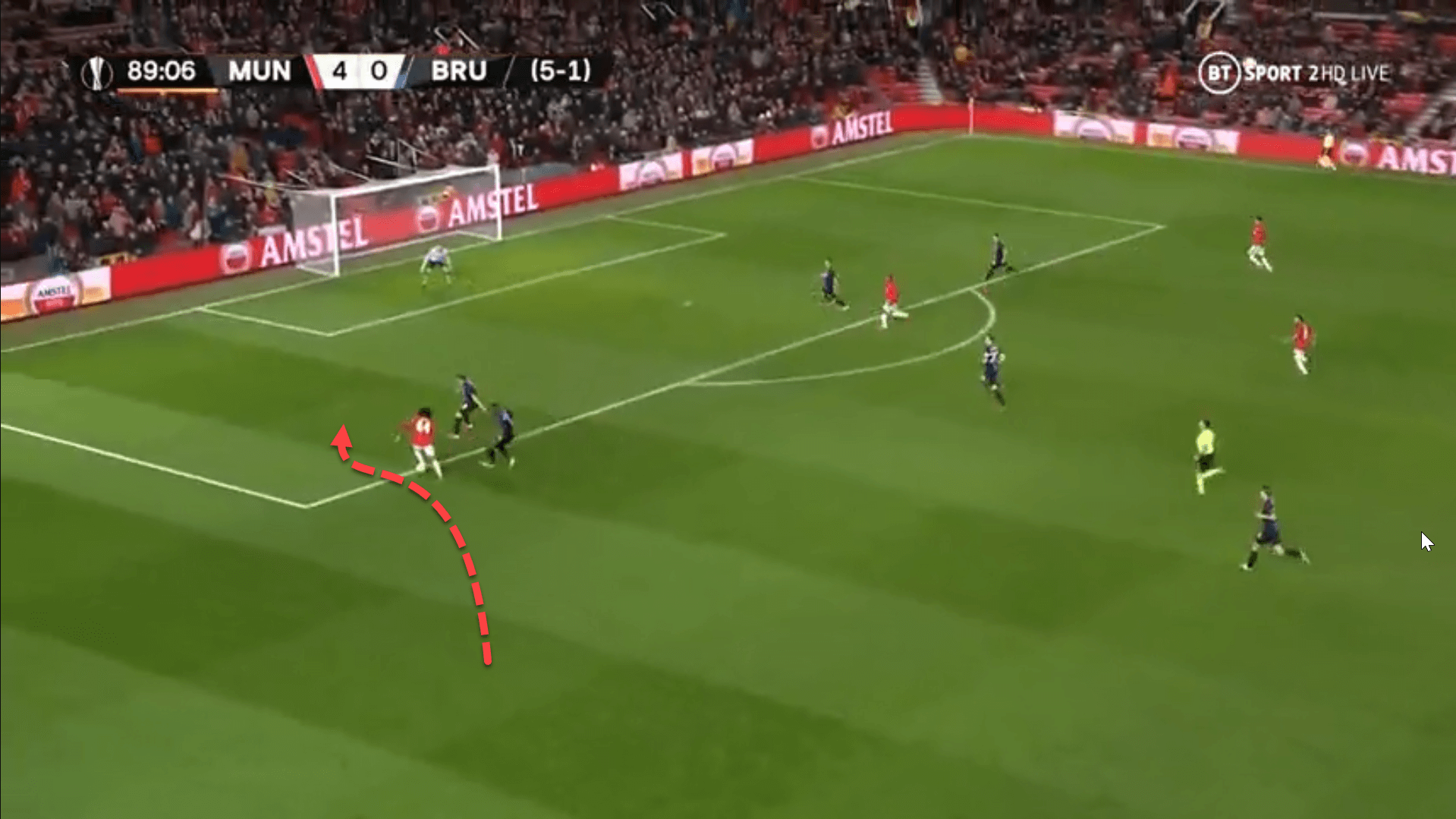 The above image is an example of Chong using his dribbling ability to create space for a shot in a match against Club Brugge. After the ball is played towards Chong on the left, he starts to directly run at the opposition full-back. Chong is able to quickly shift the ball to the left, this creates space for Chong to shoot at goal, although, he narrowly misses the target. If the 20-year-old is able to find more consistency in his shooting, his dribbling in order to find space to shoot will prove very useful when in transitions for Werder.

Chong also looks to use his pace off-the-ball, he will consistently look to make runs beyond the opposition defensive line. This has not worked when he has played for the first team much, due to the low blocks that Man United play against. However, in the Bundesliga, this kind of run beyond opposition defences, with the pure pace that Chong possesses, can be effective in transitions for Werder. 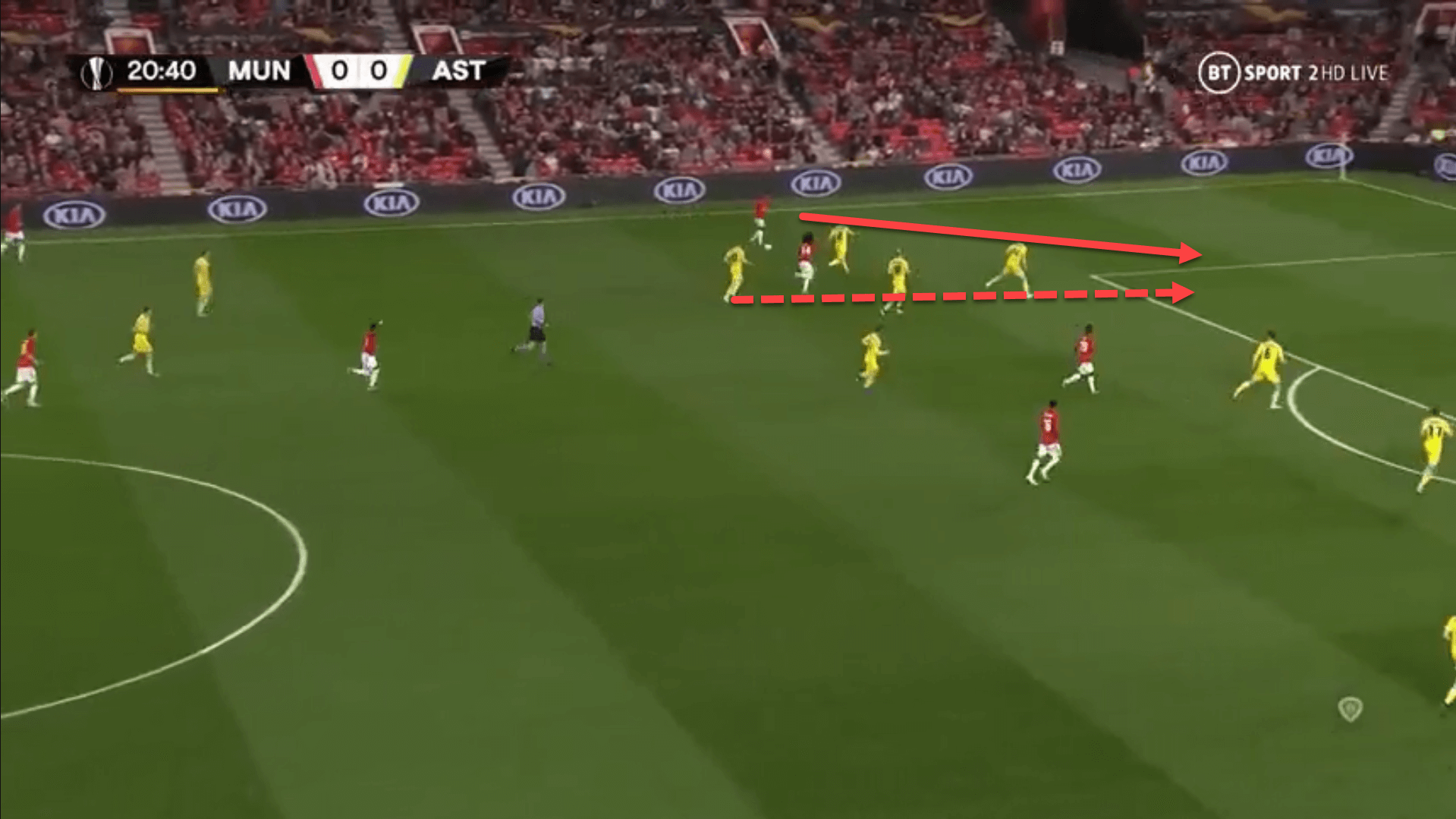 Above we can see an example of his pace, with Chong initially passing to Marcus Rashford. He then makes a direct run beyond the opposition backline, where he receives the ball back from Rashford. His cross is then unsuccessful but the run was great and will be useful in the Bundesliga, where many teams operate with a high defensive line.

Especially when he is playing on the left side, Chong looks to find a cross when he is in the final third. He averages 2.09 crosses per 90. He looks to make it to the byline when he is on the left but generally looks to cut inside and cross from a slightly deeper area when operating on the right; this is shown through his cross map below. 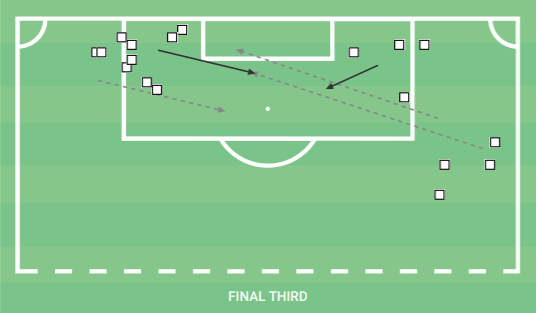 However, Chong only completes 0.46 crosses per 90, showing that there can be an improvement in his accuracy from crosses. He is able to get to the byline often, due to his pace and dribbling abilities but then he often is unable to find a target and often hits the first man with his cross or cannot find a teammate. 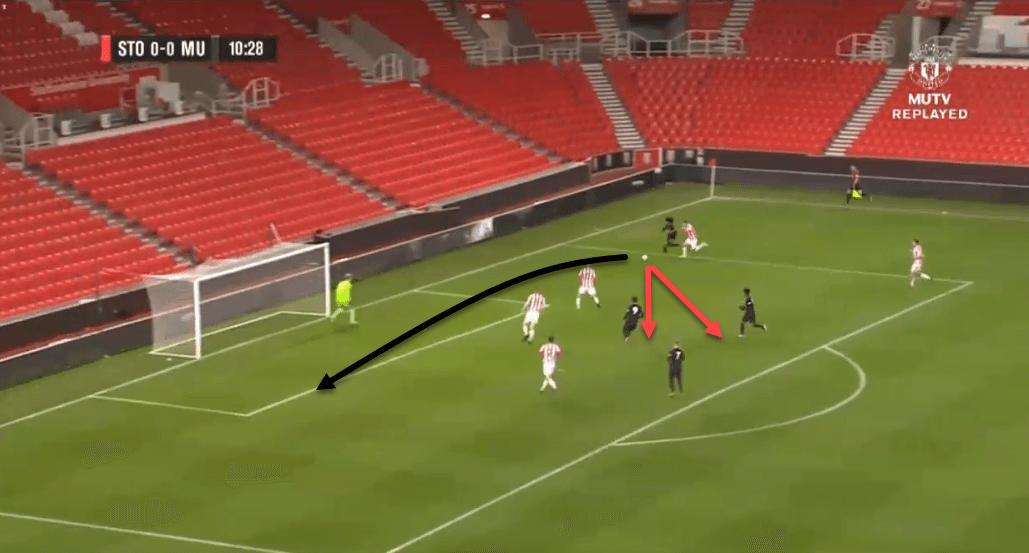 In the image above, Chong has got himself into a great crossing position, however, he has not been able to look up and see that he has two clear cutback options. Instead, he plays a ball across the face of goal, with no one challenging that area. Considering Chong likes to reach the byline when he crosses, improving his cutback crossing and awareness of when to cutback will be needed as this is usually the best cross to play when you are at the byline due to the petite angle to cross into the ‘danger area’. 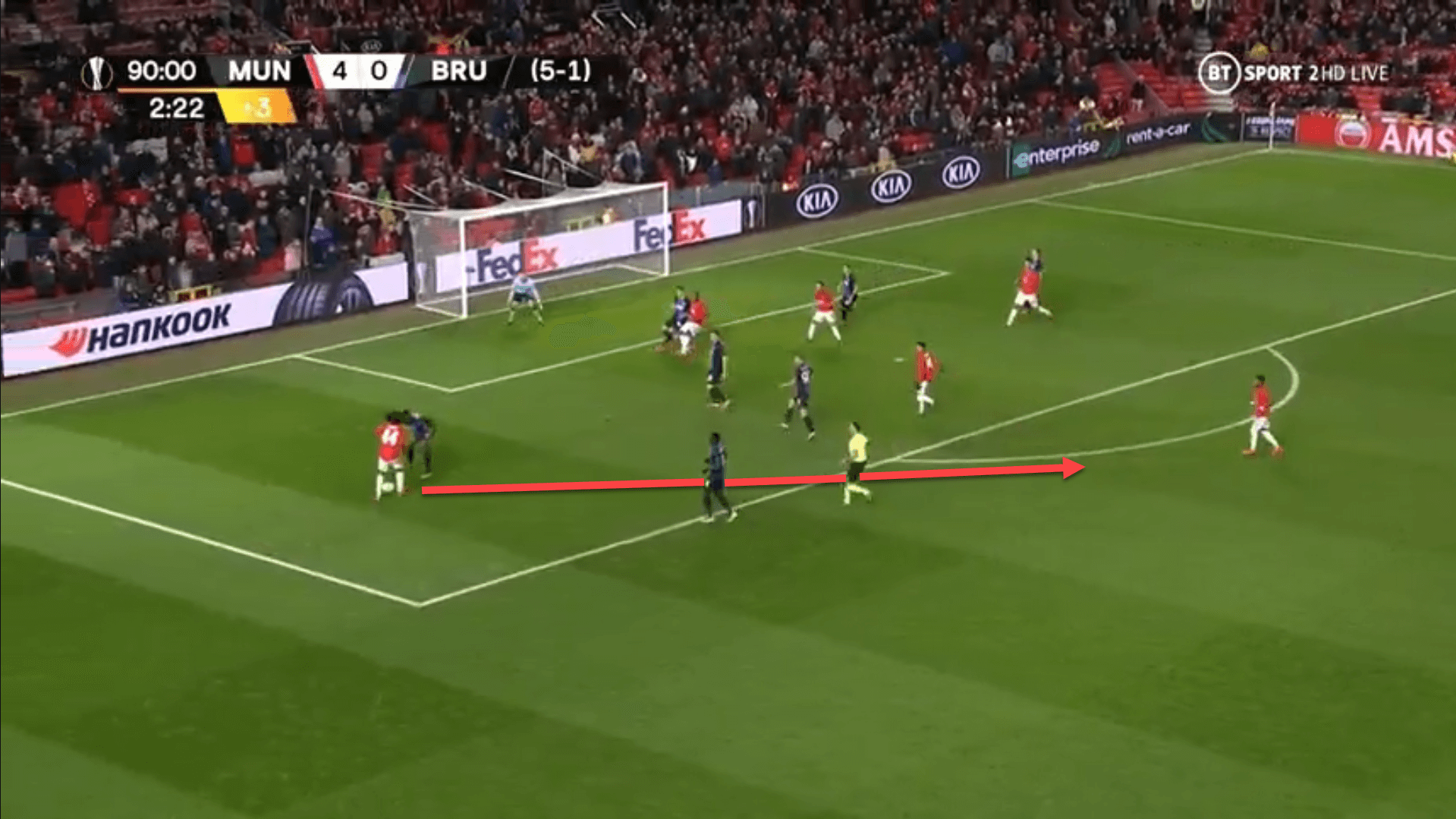 Here is an example of Chong choosing the correct option to pull his cross back. The image above shows Chong with the ball out wide, just inside the area. Instead of playing the ball into the ‘danger area’, which is fairly congested, he pulls the ball back to the edge of the box to Fred. The Brazilian is in space and can finish into the left side of the goal. This shows how beneficial it’ll be for Chong to improve in this area further.

Werder averaged 13.46 crosses per 90 in the 2019/20 Bundesliga season, 0.46 lower than the league average. Chong should be able to offer more crossing opportunities for the side, and the more consistent game time should hopefully bring improved crossing from him.

Chong has also shown glimpses of being a fairly solid passer of the ball, although, as I will further analyse, his decision making needs to improve. The youngster can play good through passes when he moves infield, most of the time this is in transitions. This could help Werder break down opposition backlines though, with their high lines. Chong offers an option in behind but can also find players beyond the opposition defence. He averages a through pass 0.98 times per 90, this is where he can help kill teams in transition, he can also look to pass between the lines, which is always a plus for a winger who could be playing inverted. 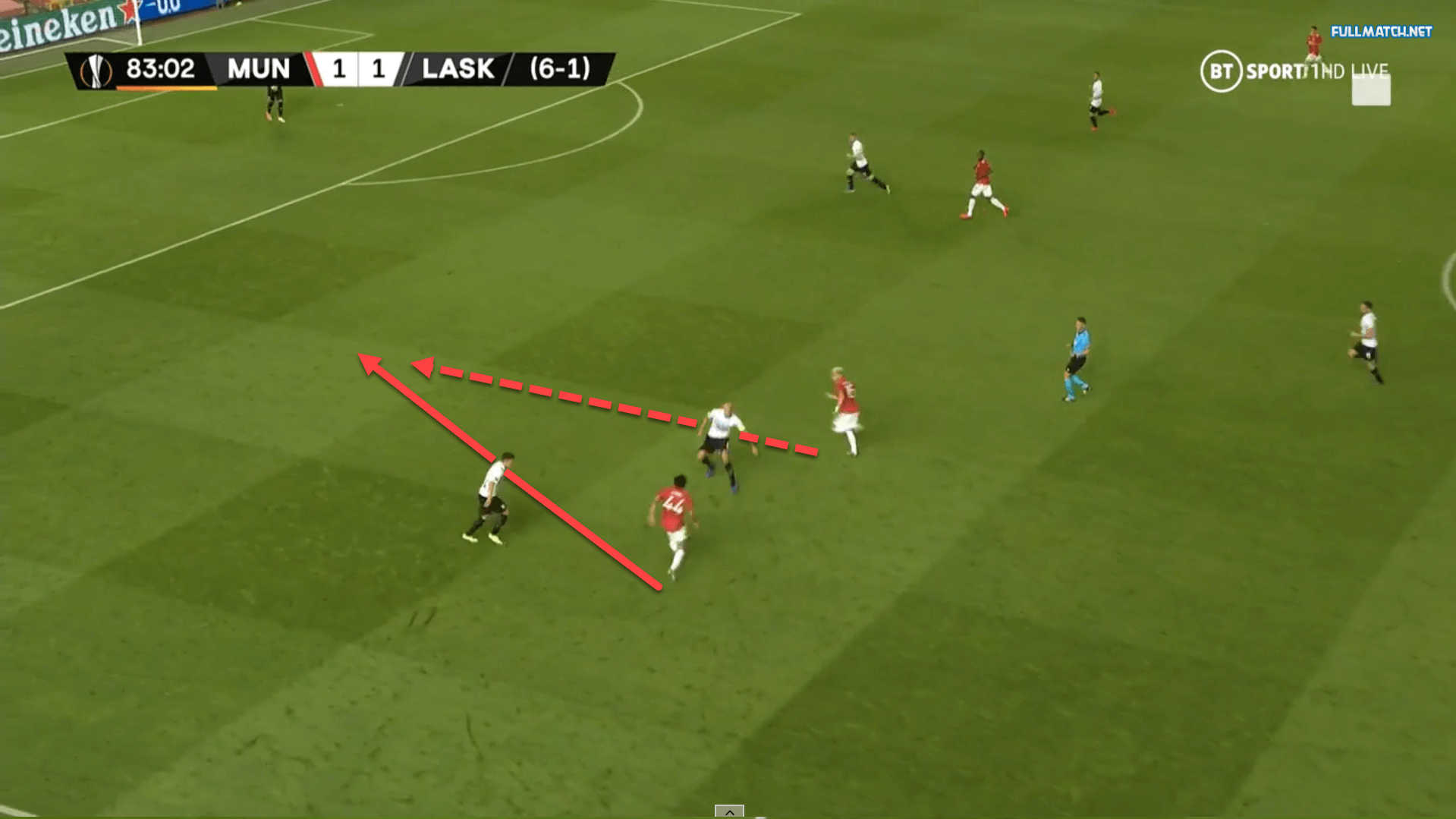 The above image is an example of Chong’s ability to play a through pass. He cut into from the left, bringing the opposition centre-back forward to attempt to stop him progressing further, but this left a hole in behind for Chong and Andreas Pereira to exploit. The Brazilian made a run in behind and Chong was able to play a great through ball to him. Although Pereira did not take advantage of this situation, the pass from Chong was impressive. 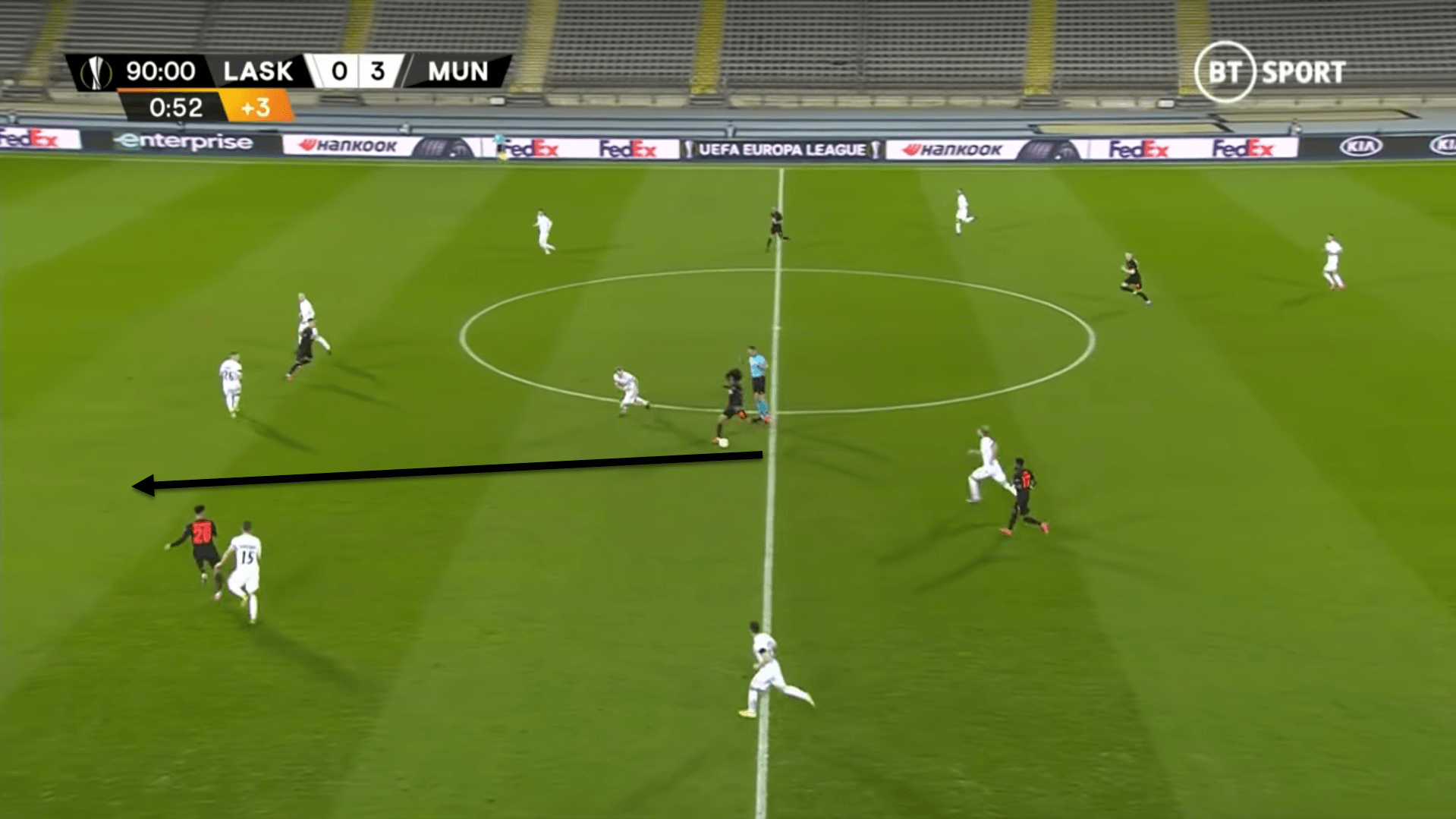 Here is another example of Chong’s passing ability, with a play which was shown previously. Above, Chong has just dribbled and made a turn to create half a yard from his marker, while Greenwood is making a run in behind. Chong does not only find his teammate but the weight of pass is brilliant and allows Greenwood to take the ball in his stride easily. It may have looked like an easy pass but putting the right weight of pass was important so that Greenwood could be running through on goal rather than too far out wide.

Chong is not a complete passer, mainly due to his decision making as we will analyse next, but it is clear that he has the ability to help playmaker in the final third and in transitions.

A clear area where Chong needs to improve is in his decision making. The 20-year-old will sometimes look to try and play the ‘Hollywood pass’ or to dribble in areas when it is not the appropriate decision at that time. If he can improve on this and be more sensible in his decision making, it’ll make his overall game more complete. 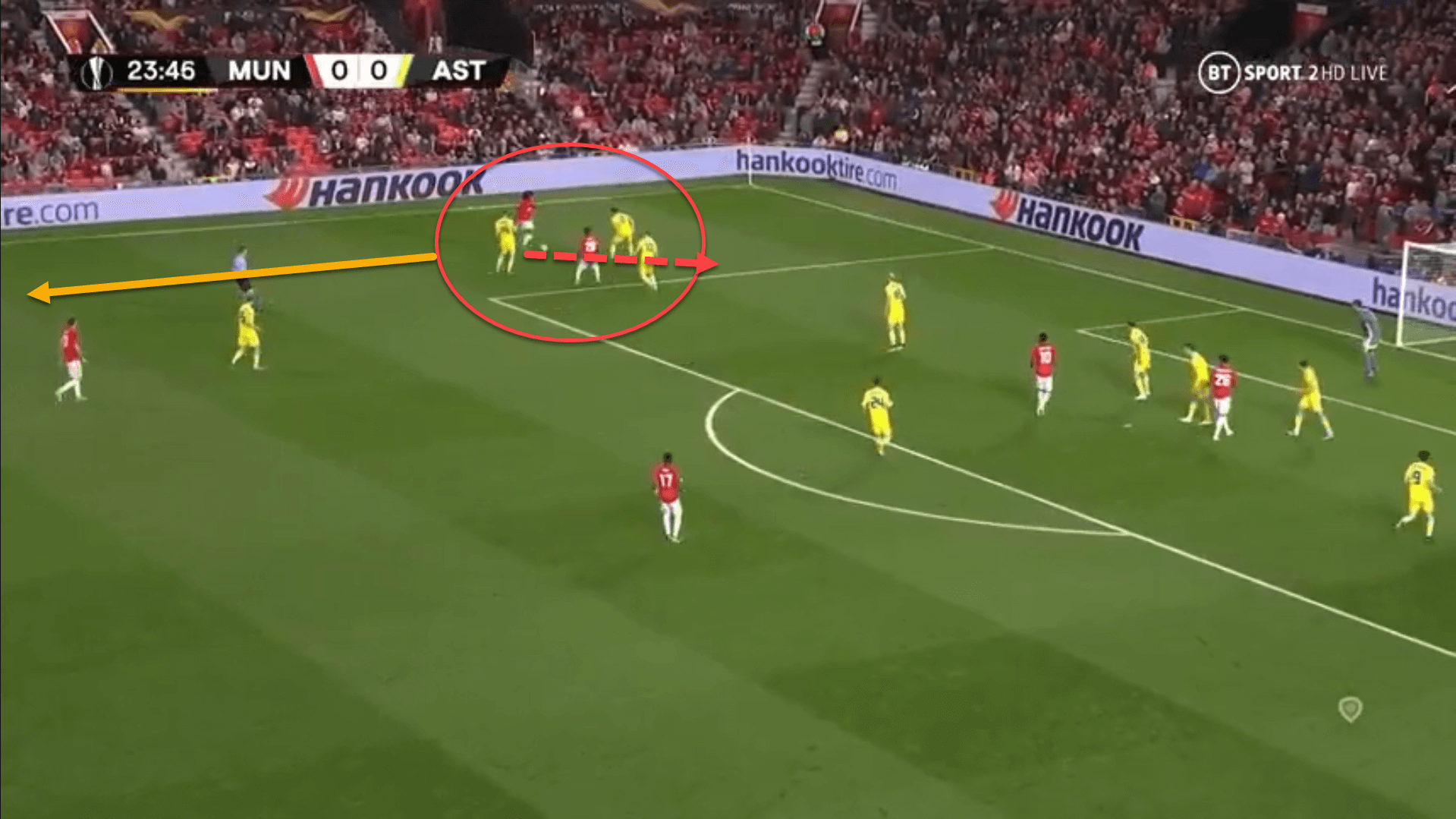 Here is an example of Chong’s poor decision making. Above, we can see the winger in a wide position in the final third. However, he has three players around him and attempting to dribble past would be extremely difficult considering they are all defensively set. The sensible decision would be to pass back to Luke Shaw and then United can recycle the ball. However, he tries to take on the players on the wing and ultimately is dispossessed. 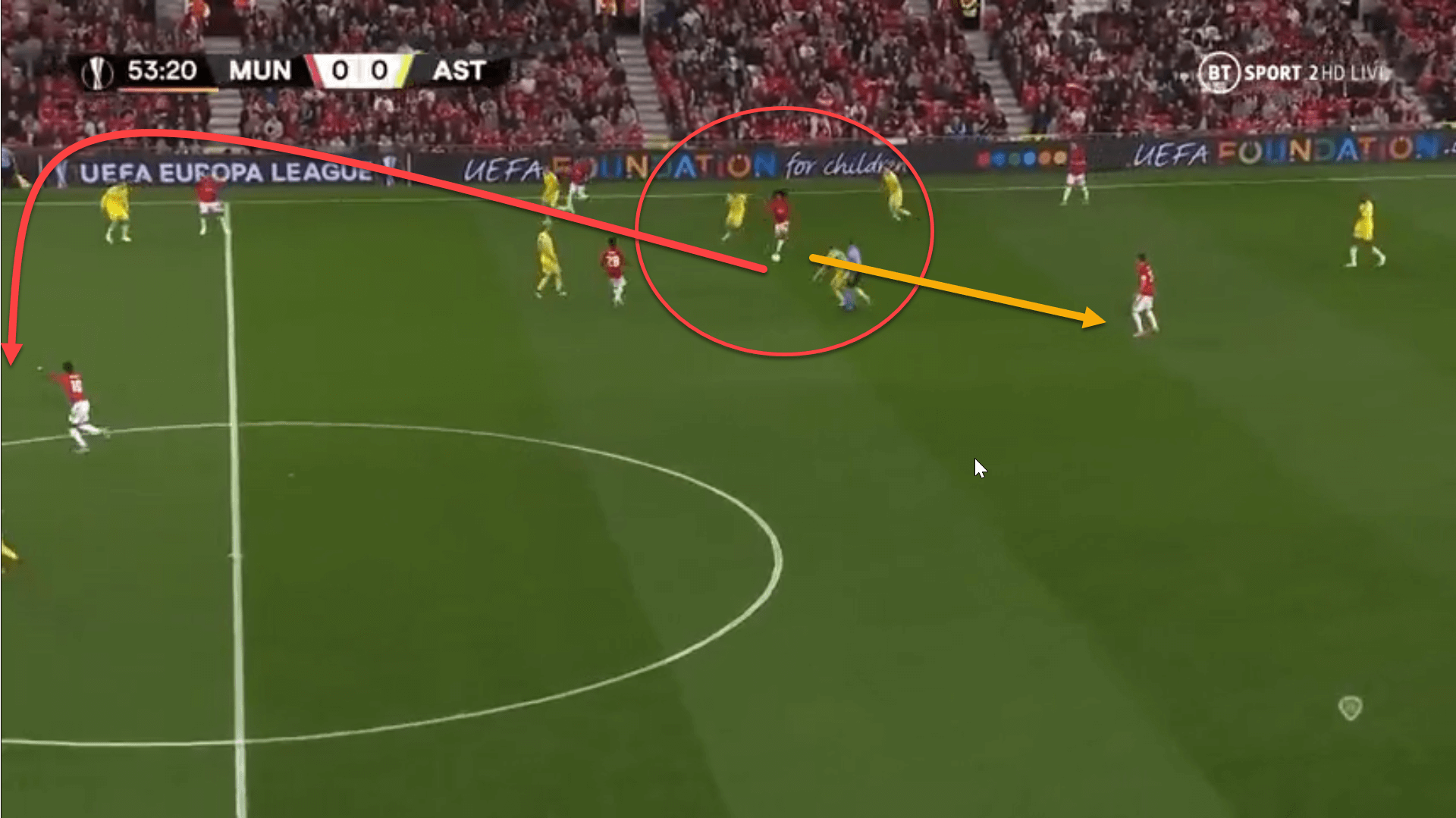 Above is another example of Chong’s poor decision making. After shrugging off an opposition player on the right side, in a deeper area, Chong has the ball and is coming inside. He looks to play Rashford in over the top of the opposition defence, however, one of the opposition defenders is already dropping off and this pass is very, very difficult anyway. While his ambition in his pass is admirable, it is an unrealistic pass and he should instead, play across to either Matic or the left-back, as there is a lot of space to exploit on the left and this could allow the side of progress the ball easily.

Consistent game time with Werder should hopefully help Chong with his decision making, this would mean he is more efficient in his passing and dribbling.

This loan option should be a good move for both parties, as it was clear that Chong was not going to develop further at United and that chances in the side would be scarce next season. The Bundesliga has also now been labelled as the league to develop youngsters due to the quick attacking nature of the league. Werder will also be getting a player who might still be quite raw but due to his skill set, he will be a great transitional player for them, which is a primary source of their attacks.