In what was a disappointing season for FC Basel, only a few of their players showed their real quality in both the league and European competitions. The Swiss side finished third, behind Young Boys and St. Gallen. However, they did boast the best defence in the league. Paramount to their defensive solidity was number one goalkeeper, Jonas Omlin.

This tactical analysis will focus on what has made Omlin such an in-demand goalkeeper. The 26-year-old has recently signed for Montpellier, so our analysis will show what he can offer his new team. We will focus on his shot-stopping, ability to leave his line, and his good range of passing.

How did Omlin’s performances compare to his peers?

Omlin and Basel reached the quarter-finals of the Europa League this past season before bowing out 4-1 to Shakhtar Donetsk. Comparing Omlin to Europa League goalkeepers will give us a better comparison against better players. 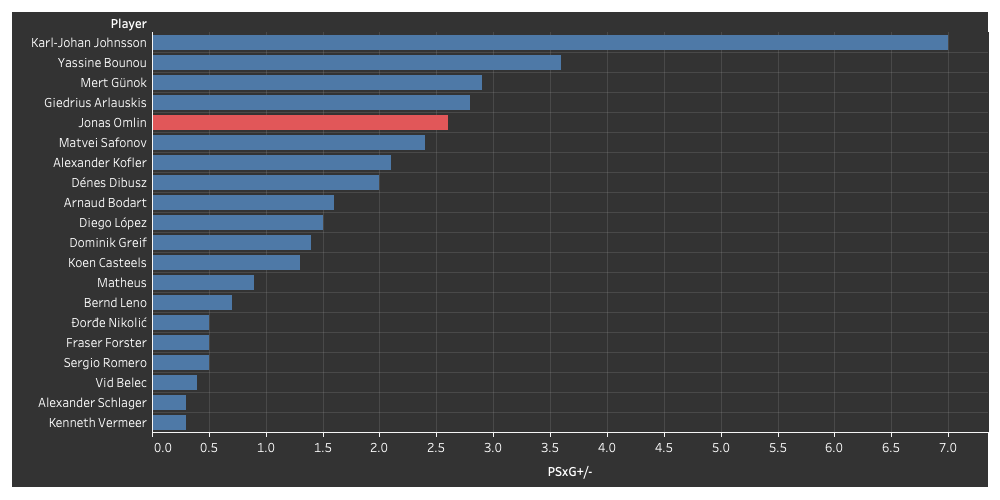 The above graph shows the best performing goalkeepers in the Europa League. PS xG+/- (post-shot expected goals +/-) is calculated from each player’s expected goals conceded minus actual goals conceded. Omlin was the fifth-best performer, saving 2.6 more goals than he was expected to. Because of his world-class performance against Manchester United, Karl-Johan Johnsson was the best performer with a PS xG+/- value of seven. Arsenal’s Bernd Leno and Celtic’s Fraser Forster also performed well.

Omlin plays for one of the best teams in the Swiss League, this means he’s less likely to concede than other, worse teams. However, the 26-year-old still faced 3.81 shots per 90 in the 2019/20 season, meaning he had plenty of work to do. But his quality shone through as he only conceded 0.92 goals per 90.

Standing at 6”1’ Omlin isn’t the tallest, however, his anticipation and reading of the game mean that he can reach difficult shots.

In both examples above, Omlin quickly analyses the position of his defenders. In both, he recognises that the striker’s only option is to bend the shot around his defender, looking for the far post. Because of his height, Omlin wouldn’t be able to save these shots unless he can anticipate where the shot is going to go. In both occasions, Omlin takes a few steps to his left before stretching as far as possible. His anticipation means he’s able to get a strong hand on the shot and prevent a rebound to an attacker.

Sometimes, it is impossible to anticipate where the attacker’s shot will end up. Therefore, it is important that a goalkeeper has good reflexes. Omlin’s reflexes and 75.97% save percentage has earned him and his team 11 clean sheets.

With the two instances above being so close to goal, and the attacker being able to get off such a good shot, it’s impossible for Omlin to read where the shot will go. With this in mind, we see that he takes up a very good start position, he isn’t too far off his line, giving him enough time to react to the shot. And his legs are bent in preparation. In the second example, the shot isn’t as good, so Omlin is able to use his handling to hold the shot.

However, Omlin’s biggest weakness in terms of his shot-stopping is his handling. It’s vital for a goalkeeper to know they need to hold the ball and when they need to palm the ball to safety.

In this example, Omlin isn’t at full stretch, so he should be holding this shot. If he parries the ball with the inside of his hand then the ball will be diverted into his mid-drift instead of falling to the striker who’s able to tap home. Although this doesn’t happen often, it would be a good area for the Swiss to improve on.

On the other hand, Omlin’s one-on-one ability is very effective. Although he doesn’t always pick the right technique, his bravery and commitment make him a good preventer. 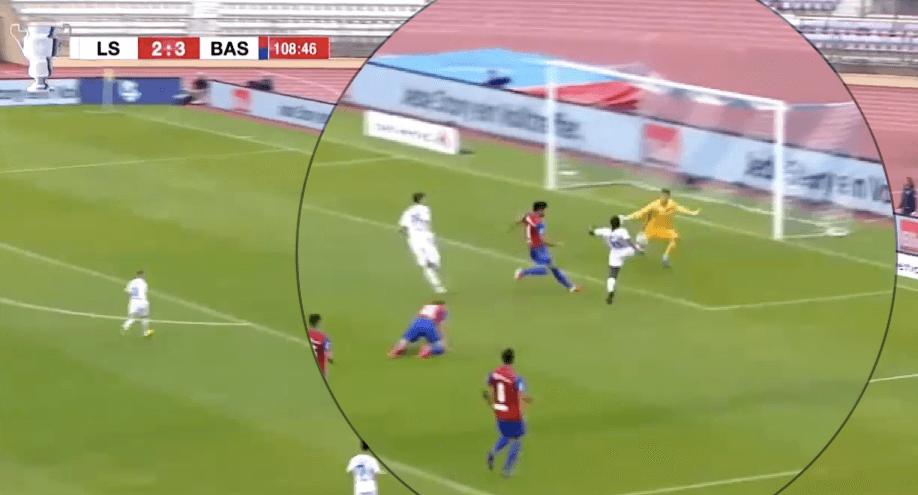 Here, we can see that Omlin maintains a close distance to his goal, meaning he’ll have more time to react if the attacker was to take a shot on early. As the attacker gets nearer to the goal, Omlin aggressively spreads himself, making himself as big as possible. Given the open-angle, this is a great decision from the Basel man.

As mentioned previously, Omlin doesn’t always make the correct technique during one-on-one situations. For context, a block is most effective when the angle is tighter, whereas it is more effective to spread when the attacker is coming from a more central position. 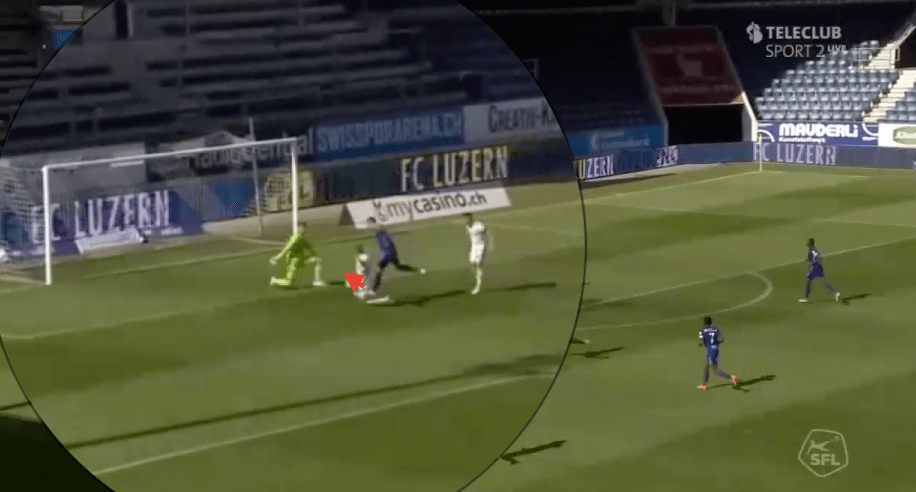 In the above example, Omlin is facing a shot from directly in front of him. A block is a bad idea as it prevents another significant movement, meaning he’s rooting to the ground. It also means that the attacker will be able to curl the ball around him, given enough time. Omlin is lucky on this occasion as the shot is straight at him. We can see in the image how much space he has left to his left.

So how does Omlin’s shot-stopping compare to his peers in the Europa League? 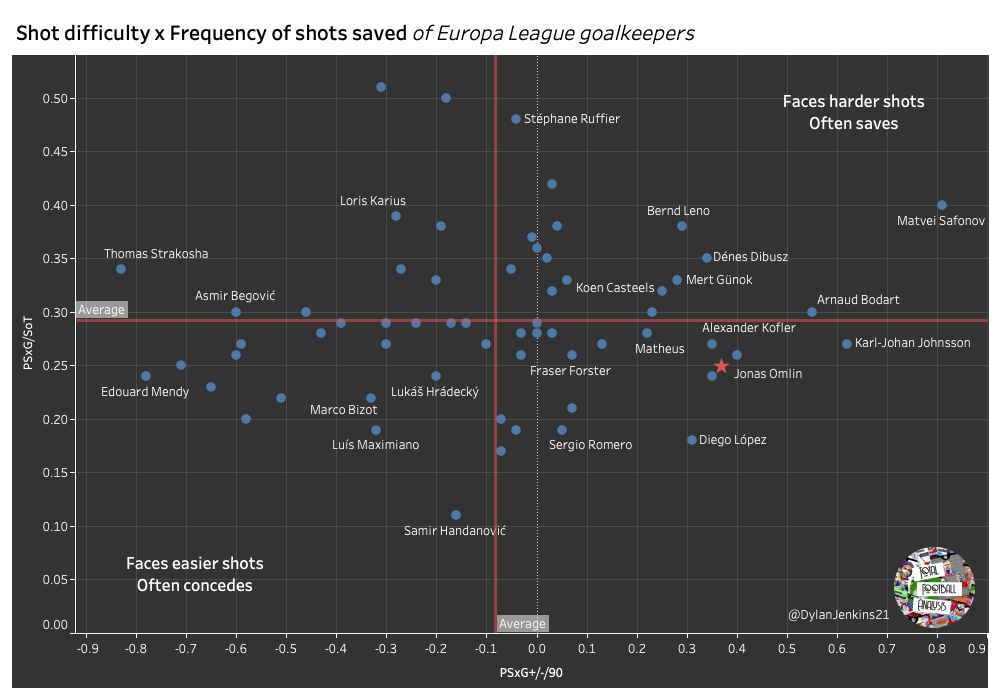 This graph shows the difficulty of shots faced and how often they saved these shots. We can see in the above graph that Omlin performed very well in the European competition. His PS xG per shot on target value is 0.25, which is just below average. He saved 0.37 more goals than expected per 90, which is well above the competition average.

As well as his braveness in one-on-one situations, Omlin is very good at leaving his line to claim crosses and set pieces. He has 1.02 actions per cross and 0.47 actions per set piece, both higher than the league average.

Here we can see how he’s battled through opposition players and his teammates to claim the ball. A goalkeeper that does this is invaluable to a team in the modern game. Omlin certainly has the ability to take pressure off his defence by using his aggressiveness and leap to take the ball cleanly.

Here, we can see how Omlin combines his confidence to come off his line and quick thinking to create a counter-attack. The Swiss has 4.7 xGChain, meaning his 0.24 quick breaks per 90 often lead to very good chances for his team. Whenever Omlin takes a cross or set-piece, he is always looking to get his team back on the front foot. Whether it be through a throw or long, accurate kick to his teammate breaking into the opposition half.

Although Omlin often comes off his line, he is sometimes reluctant to ‘sweep up’ behind his defensive line. Basel don’t play a very high defensive line, so the keeper doesn’t often have the chance. But Omlin still averages 0.98 sweeps per 90, making 1.42 interceptions. 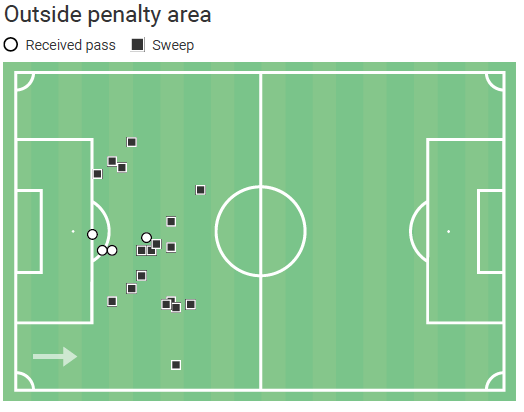 In the above map, we can see that the 26-year-old is still very capable of sweeping up behind his teammates. However, he doesn’t possess much composure when it comes to these situations, he nearly always clears the ball to safety rather than trying to find a teammate.

A very good range of passing

Omlin makes 18.51 passes per 90 with an exceptional accuracy of 90.42%. He’s one of the best passers outside the top five leagues. His passing ability makes him very valuable to his team as they like to keep possession. Basel have the second-highest average possession (55.8%) in their league, and Omlin is vital to this. The 26-year-old has 73.80% tendency to pass short or medium and a 44.89% tendency to pass laterally.

His chipped pass is his best quality in terms of passing. He’s often able to spot his winger or full-back in space out wide and find them with an accurate chipped pass, meaning it’s easier for them to control.

However, it’s his goalkicking that can sometimes let his team down. He has a bad habit of kicking the ball upfield to a player that is not likely to win the aerial duel instead of passing it short to his defenders. 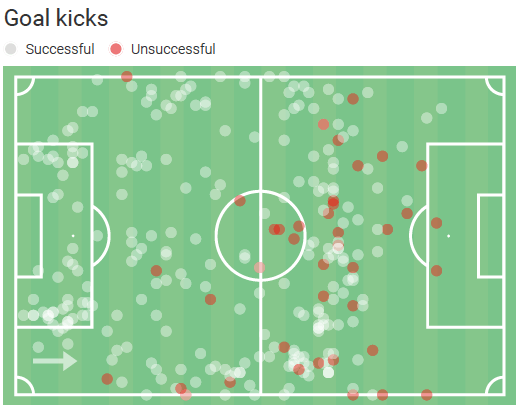 How does Omlin’s passing compare to other keepers in the Europa league? 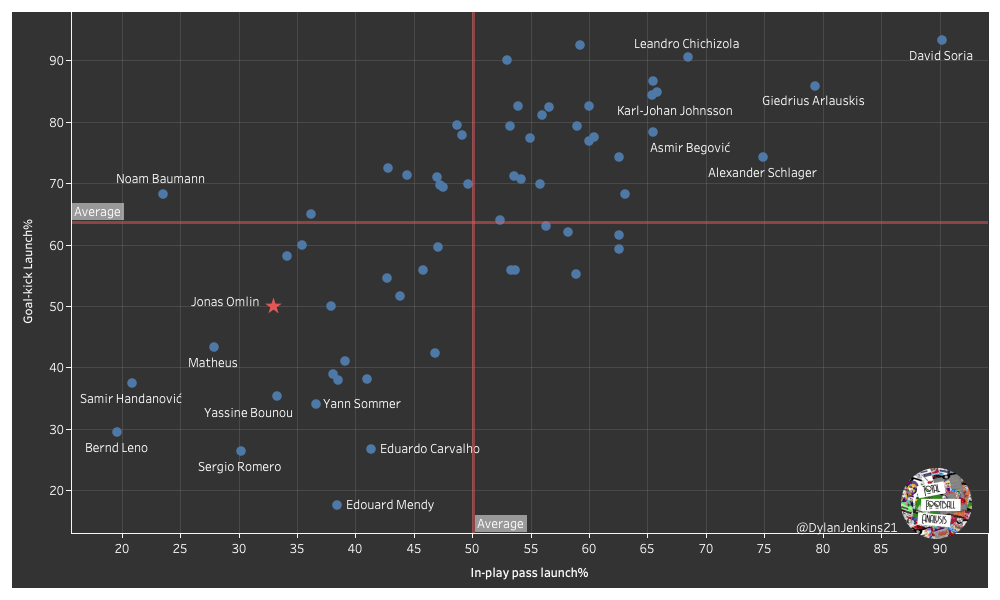 From the above graph, measuring how often goalkeepers launch their passes, we can tell that Omlin launches below the average amount. He launches 50% of his goal-kicks and just 33% of his in-play passes. Leno and Inter’s Samir Handanović have been two of the better passers. These kinds of stats show that he is more than capable of playing in a team with possession-based tactics.

This scout report has analysed why Omlin has been one of the best performing goalkeepers outside the top five leagues. His shot-stopping, aggressiveness, and passing ability would make him a great addition to a lot of mid-level teams within the top five leagues. The 26-year-old is still yet to hit his goalkeeping peak, therefore, he clearly has a lot of room to improve.