Almost a year after the completion of the UEFA Women’s Champions League round of 16, the quarter-finals finally swung into action. Lyon (1st in Division 1 Féminine) took the field against Bayern Munich (2nd in Frauen-Bundesliga) to see who would take on PSG in the semi-finals. Analysis shows that while both teams took to the pitch with aggressive and sound attacking tactics, both teams had trouble establishing an attacking rhythm. The result was only three shots on goal for each team at the final whistle. This tactical analysis will look into exactly how it played out.

Lyon: Out of possession

When out of possession, Lyon used an aggressively positioned high defensive line. This, in turn, set the midfield and forward lines to be in a position to press effectively in Bayern’s half. Lyon sought to do this through a base four-four (diamond)-two shape.

The base pressing shape prioritized restricting forward access in central areas. This led to Lyon occupying the centre channel and both halfspace while vacating the flanks. The four-diamond-two shape also allowed Lyon to effectively create five vertical lines of defence while remaining horizontally compact.

Naturally, Bayern’s possession would find it’s way to the open flanks. As the ball travelled to the flank, Lyon switched from a spatially oriented defence to a player to player press. The entire Lyon block would shift over to one side of the pitch and squeeze the space around the Bayern ball carrier. We will see later that Bayern would often have an open attacking player on the far side of the pitch. Despite this opening, Lyon’s pressing was so intense and quick that Bayern were unable to release the ball to the open player.

Below we see an example of this tactic early in the first half. Bayern’s goalkeeper, Laura Benkarth has possession of the ball. Lyon’s backline pushes up to the halfway line and sit in a 4v3 situation against Bayern’s forward attackers. Lyon also created a diamond in the midfield, creating a 4v3 in that immediate area.

Benkarth releases and aerial ball to her left flank to left-back Carolin Simon. As the ball travels to Simon, the entire Lyon unit shifts towards that side of the pitch. As the defending players move towards the ball’s destination each Lyon player moves to within a few metres of the closest Bayern player.

Simon is able to one-touch the ball forward to midfielder Linda Dallman, who also tries to quickly play the ball forward. As these passes occur, each is done under intense physical pressure from each Lyon marker. Although the passes are being executed their technical quality becomes worse with each forward pass. A Bayern player is forced to attempt to receive a bouncing ball and then play forward while fending off their defender.

The ball eventually makes it’s way to the Bayern forward line, but by that time Lyon are in position to recover the ball an initiate their phase of possession. We should also take note that in the image below we notice that although Lyon are about to recover the ball, but a potentially dangerous situation is set up at their backline.

The Lyon defenders are in a 3v3 situation with an entire half of space behind them to exploit. More noteworthy is that Bayern midfielder Sydney Lohmann is in a large amount of space in the centre channel.

Lyon’s press was effective throughout the match and helped them to retain control in Bayern’s half for extended periods of time. Despite this, Bayern were almost always one pass away from breaking the press and initiating dangerous attacks in large areas of space. Lyon operated on a high-risk/high-reward tactical format and it proved to be quite successful.

Bayern aimed most of their attacking play down the right flank. This was partly due to Lyon allocating Amel Majri at left-back. Majri is a natural midfielder, hailed for her attacking ability. Bayern chose to attack through her position as opposed to Lucy Bronze, who lurked on the other side of the pitch as Lyon’s right-back. 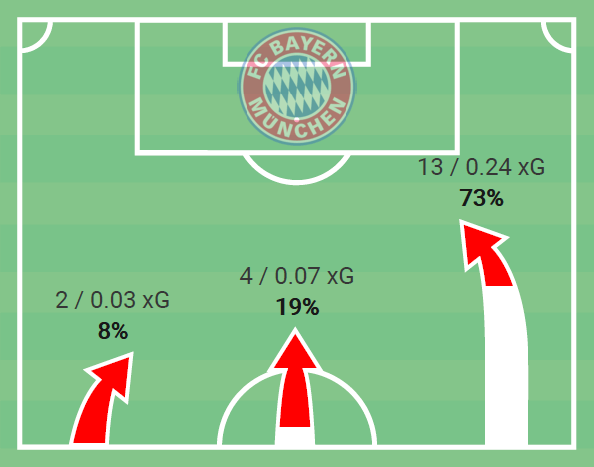 Bayern initiated these attacks through a vertical diamond structure with players positioned on the forward, midfield and defensive lines. In addition the diamond, midfielder Lina Magull would drift into the halfspace, just in front of the Bayern defence, to act as a potential escape outlet.

The top of the diamond would be occupied by right-midfielder Lineth Beerensteyn, who pushed higher up the pitch to the offside line. Simultaneously, the Bayern defensive line would shift horizontally to allow right-back Hanna Glas to shift up the pitch and position herself on the outer edge of the Lyon midfield line.

A Bayern midfielder, typically Lohmann, would also drift over into the right halfspace and position herself in a gap in the Lyon midfield line. The base of the diamond would be formed by centreback Marina Hegering. Once the diamond was formed, a rotating cast of Bayern attackers would position themselves between the Lyon centrebacks in anticipation of an eventual through ball.

We found multiple examples of this attacking tactic throughout the match with an illustration in the sixty-seventh minute. Bayern have gained possession with the objective of penetrating into the attacking third. We can see that Glas and Linda Dallmann have positioned themselves on the same line as Lyon’s midfield. We also see that their shoulders are open to the field, allowing them to receive across their body and quickly advance play into space behind with their second touch.

Forward Jovana Damnjanović positions herself between the two Lyon centrebacks in anticipation of and eventual pass into attacking space behind the Lyon block. Although Bayern successfully initiated their attacking structure, they are unable to progress forward in this example.

Near the end of the first half, Bayern executed this tactic and created a rare chance on goal. We can see the diamond structured on the right flank of the pitch. In this moment, Lohmann has drifted over to form the left side of the diamond and aligns herself in the halfspace with the Lyon midfield line. Glas positions herself on the outside of Lyon’s midfield line and is able to receive across her body on the touchline to penetrate forward with a dribble.

As Glas penetrates forward she draws the attention of Lyon centreback Wendie Renard. Renard takes a step forward to slow the progress of Glas and consequentially opens up space for Bayern forward Lea Schüller. As Renard moves to pressure the Bayern dibbler, Glas releases a pass into space behind Renard for Schüller to run onto.

Schüller takes a touch to control the ball and releases a shot at the Lyon goalkeeper. Although the Lyon goalkeeper is able to stop the shot, this moment represented a breakthrough for Bayern who had found trouble progress through the thirds up until this point of the match.

Although both teams struggled to create quality chances on goal, Lyon used a few core tactical mechanism to shift their team shape into an aggressive attacking format. Both mechanisms placed five Lyon players high up the pitch, usually on the offside line, while occupying both flanks, the halfspaces and the centre channel.

Both of these team movements were activated by the positioning of central midfielder Saki Kumagai. If Kumagai dropped between the centrebacks a chain reaction occurred (left picture below). Firstly, the Lyon centre-backs would shift horizontally to the halfspaces. This created a backline of three and enough defensive coverage to allow fullbacks Bronze and Majri to be released and press forward into attacking spaces.

As both fullbacks pushed all the way up the pitch to the Bayern offside line, the attacking wingers Eugénie Le Sommer and Delphine Cascarino would push high as well and tuck into the halfspaces. Lastly, Amandine Henry and Dzenifer Marozsan would remain centrally located, below the newly formed front line of five, to provide forward outlets and defensive cover if the ball was lost. This allowed Lyon to create a 3-2-5 shape.

Alternately, if Kumagai remained in a central position in front of the defensive line a different attacking mechanic would unfold. Lyon’s wingers would then push high and wide to provide width in the attack and options for through or direct balls on the flanks.

As the wingers pushed forwards, so would the attacking midfield players into each of the halfspaces. This movement would initially leave Kumagai alone in the midfield with four defenders behind her. Accordingly, the two Lyon fullbacks would push forward into the halfspaces (or flank if the ball was on their side) to act as a circulation outlet or as a quick counter-pressing option.

This allowed Lyon to attack with a 2-3-5 shape.

This attacking team shape gave Lyon a strong base in attack, but just like their opponent, they struggled to make their way to the box and make quality chances on goal. Lyon were eventually able to score their two goals through a direct free-kick and a header from Parris at the top of the box over and oncoming Benkarth.

In the end, Lyon advance to the semi-finals feeling their confidence that they can easily overcome french rivals PSG wavering. Questions have been raised considering that Lyon did not see their standard attacking performance against Bayern. More importantly, we must remember that Lyon and PSG’s Coupe de France meeting in early August resulted in a penalty shootout. Their semi-final match up looks to be quite interesting.