Matchday eighteen of the Frauen Bundesliga brought us a matchup of the current league leaders Wolfsburg hosting fourth-place FFC Frankfurt. Frankfurt are punching above their weight and are aiming to break into the competitive top three of Wolfsburg, Bayern Munich and Hoffenheim (and fight for a Champions League berth). Analysis shows that Frankfurt entered the match with a fairly aggressive plan for their out of possession tactics.

Wolfsburg were easily able to handle the problems thrown at them while in possession and were able to create plenty of chances on goal. This tactical analysis will look into exactly how it happened.

FFC Frankfurt: out of possession

FFC Frankfurt’s tactics when out of possession set the foundation for most play throughout the match. They chose to employ a 4-4-2 mid-block with a primary focus on controlling the Wolfsburg fullbacks.

Frankfurt did this by pushing up their outside-midfielders to apply quick and immediate pressure to Wolfsburg’s fullbacks Noelle Maritz and Anna Blässe. The two Frankfurt forwards, Géraldine Reuteler and Laura Freigang were tasked with marking the Wolfsburg centrebacks as well as creating a cover shadow to eliminate Wolfsburg central midfielder Sara Björk Gunnarsdottir as a passing option.

By employing these individual tactics, Frankfurt would hypothetically be able to control the entire Wolfsburg backline of four and central pivot with the use of only four players. In turn, this gave Frankfurt an overload of  players in their defending and midfield line to control Wolfsburg’s front three and two attacking midfielders.

Overall, Frankfurt had six players in the back (red box below) to control Wolfsburg’s five and would be able to control the Wolfsburg defensive and pivot players (yellow box) with only four players. On paper, an overload in the back and controlling the opponent with an underload in the front is a formula for success. 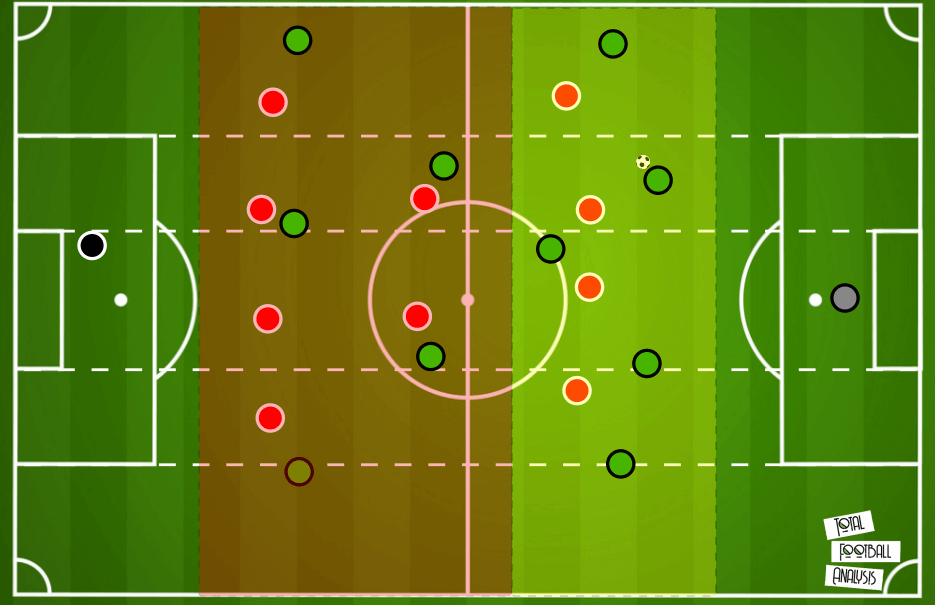 We see examples of this throughout the match. Below, in the seventeenth minute, Wolfsburg are building out of the back from their defensive third. We can see that Frankfurt’s right midfielder Sjoeke Nüsken, has pushed up to the forward line to enable quick access to Wolfsburg left-back Maritz.

This out of possession tactic may work on opposition with slow passing tempo and little off-the-ball movement, but Wolfsburg do not fit that profile. Below, we see a moment below in which Wolfsburg have circulated the ball to their right flank. Frankfurt have shifted their defensive block over and have moderately restricted passing options in the immediate area.

The key detail in the image below is that in this moment Frankfurt’s right midfielder prioritizes restricting Wolfsburg’s option to circulate possession through the backline to the left flank. This is as opposed to tracking back to rejoin the midfield line and to cover the Wolfsburg centrally positioned attacker. Frankfurt aimed to restrict space on their left flank well enough that Wolfsburg players would not have enough time or space to find an open player on the far side of the pitch. 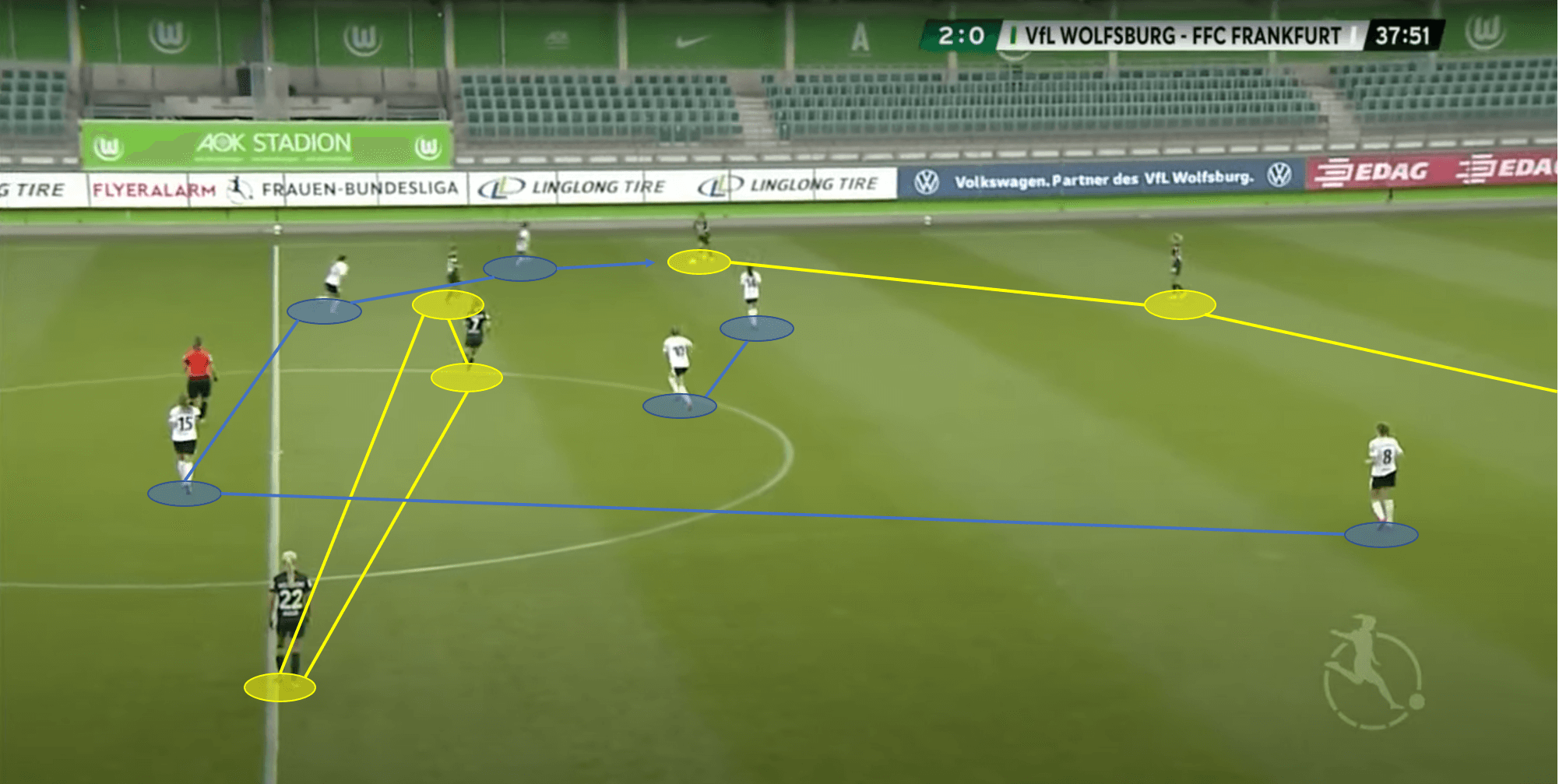 Frankfurt’s out of possession tactic was a good idea in theory and would have reaped crucial transitional attacks if executed correctly. As we will see below, Wolfsburg had other ideas.

Wolfsburg have been noted as a 4-4-2 base team. This is only when they are out of possession. In possession, Wolfsburg morph into a 4-3-3 shape with wingers and fullback providing width in attack. The three central midfielders are given license to drift and rotate to find or create platforms for attack.

Having discussed Frankfurt’s out of possession tactic, we can then see how Wolfsburg sought to bypass the visiting team’s defensive shape. Wolfsburg did this with two primary off-the-ball movements.

The space left behind the Frankfurt outside midfielders was ripe for exploitation by the Wolfsburg midfielders. Wolfsburg deployed Pernille Harder and Alexandra Popp into these central attacking positions. This is a crucial detail, considering that Popp is in the top ten for scoring in the current Frauen Bundesliga campaign and Harder leads the league with a massive 20 goals or 1.47 goals per 90 minutes played. 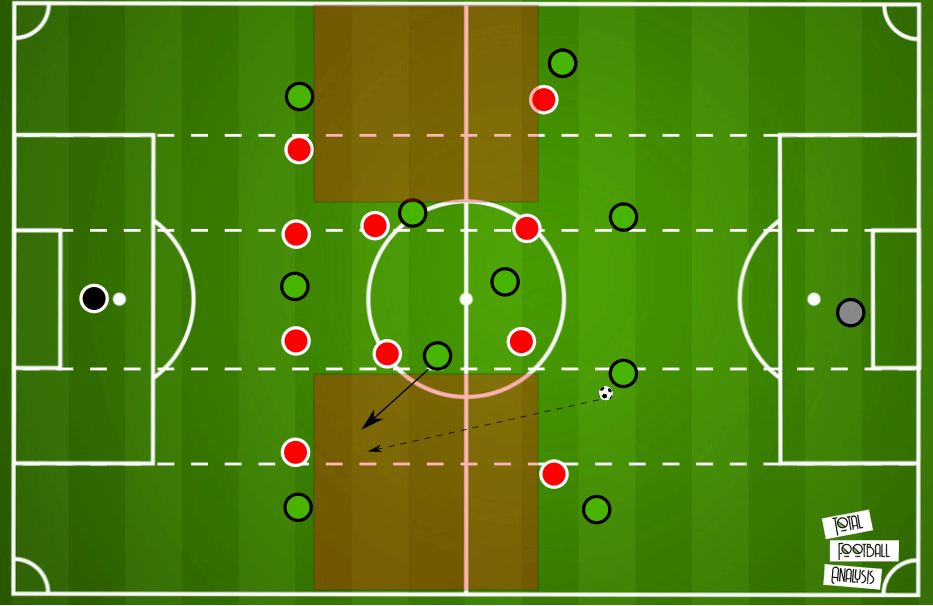 Below we see a moment in which Wolfsburg have progressed forward from the defensive third. After circulating the ball horizontally through their backline, Harder drifts into the now massive gap (about 18m) between the Frankfurt defenders and midfielders. Because Harder is moving on the blindside of the entire Frankfurt midfield and forward lines, she is easily able to move undetected and receive the ball in a dangerous area. 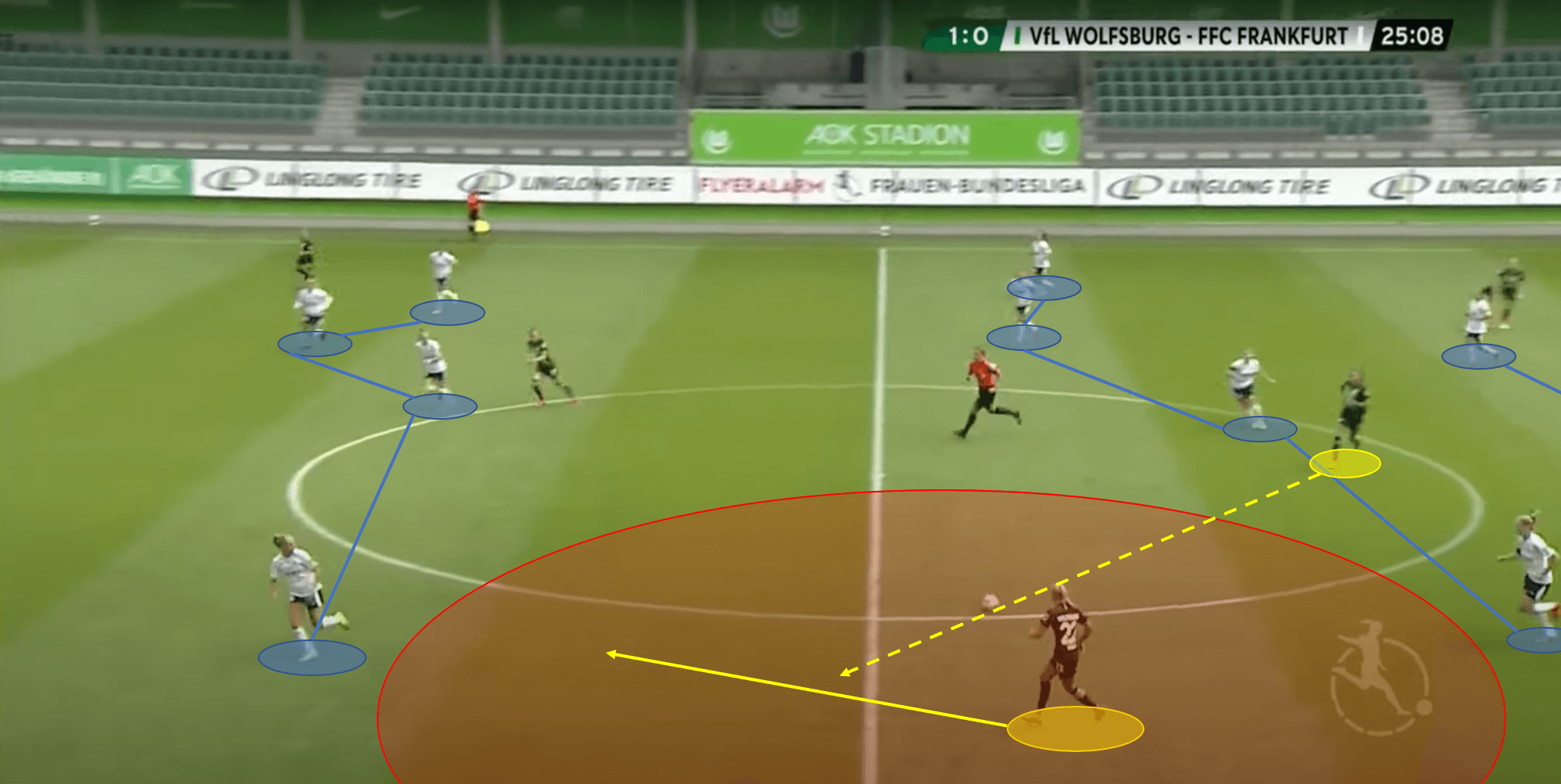 The space created for Harder and Popp was also enhanced in size by off-the-ball attacking runs by the three forward Wolfsburg players. By employing these runs, Wolfsburg were also able to threaten behind the Frankfurt defensive block and keep the visiting backline on their toes at all times. 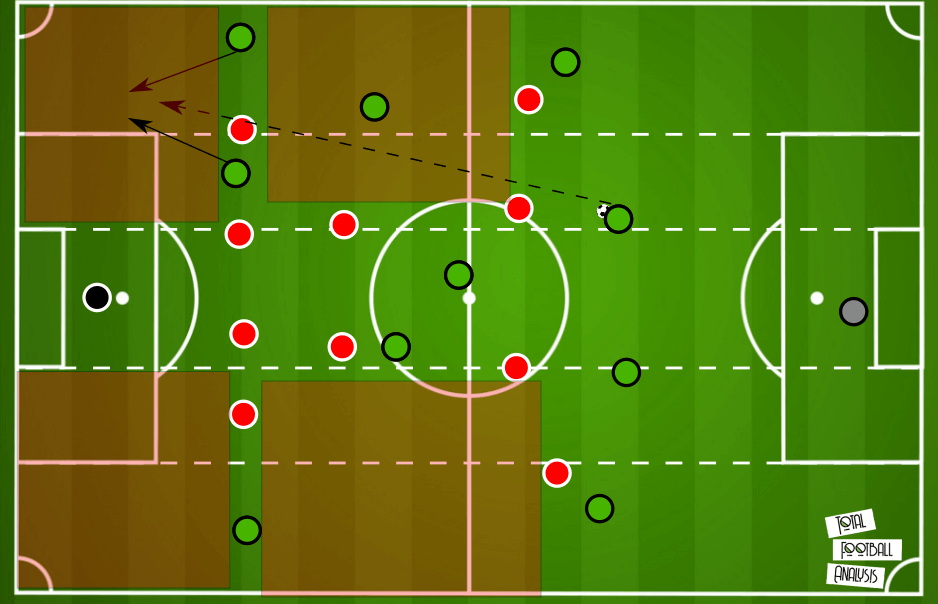 Wolfsburg used both avenues of attack to keep the Frankfurt squad on their toes. Below we see a moment in which the Frankfurt block were too focused on closing down space between the lines on the right flank. The Wolfsburg players in the area have recognized this and have initiated runs into space behind on the said flank.

Because the Frankfurt players were focused on the players between the lines, the Wolfsburg attackers are able to get a crucial lead on their attacking run. The ball is played behind and Wolfsburg are able to continue play in a dangerous area. 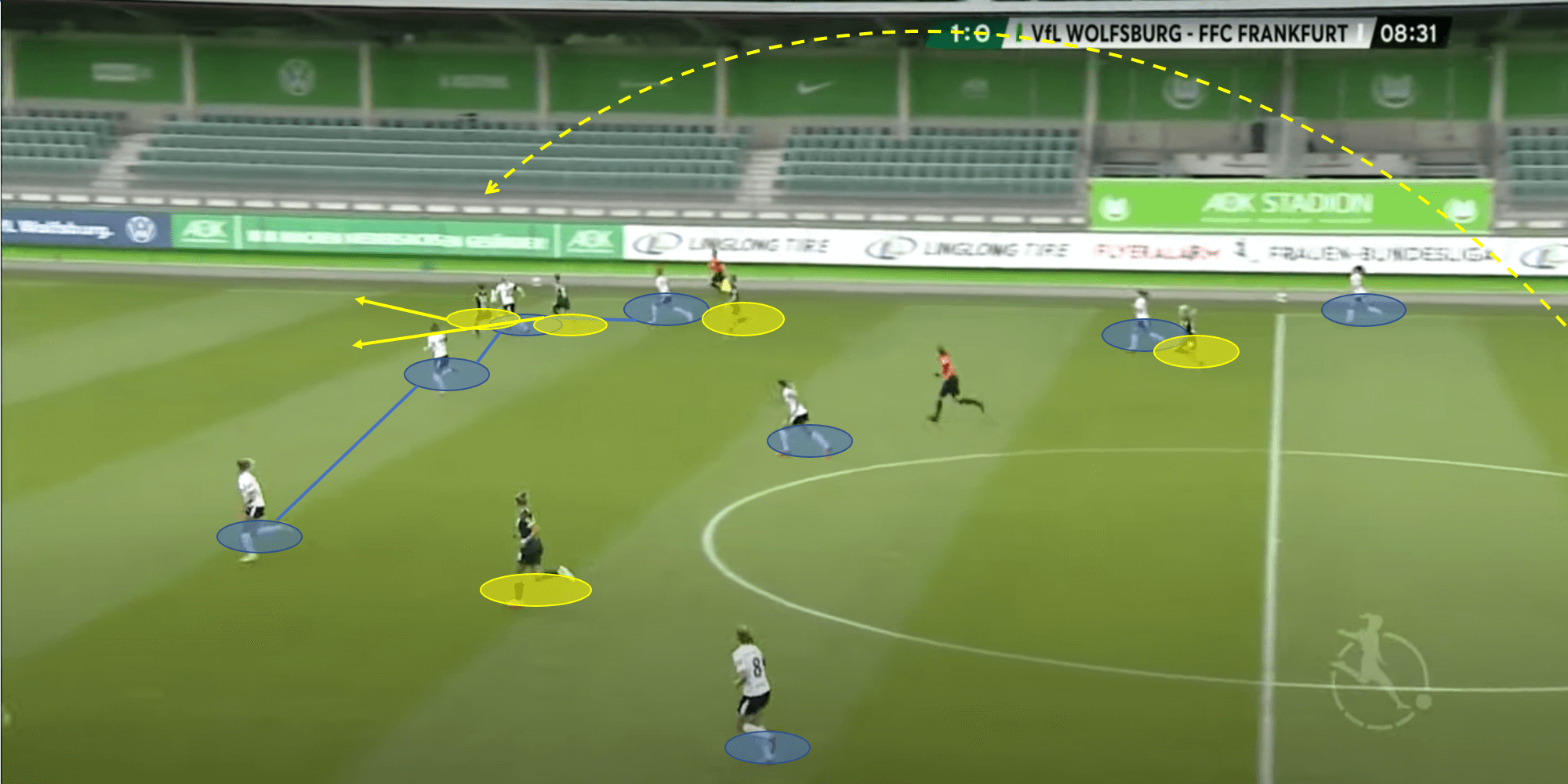 Quickly, Wolfsburg began to both seek space between the lines and create attacking runs behind in simultaneous moments. We can see in the image below that Harder is able to receive the ball in space, as the Frankfurt central and outside midfielders are nowhere near her.

As the ball is released to Harder, the Wolfsburg attackers begin to sprint forward. Theses sprints force the Frankfurt backline to commit to either tracking the behind the line run or closing down space around Harder. 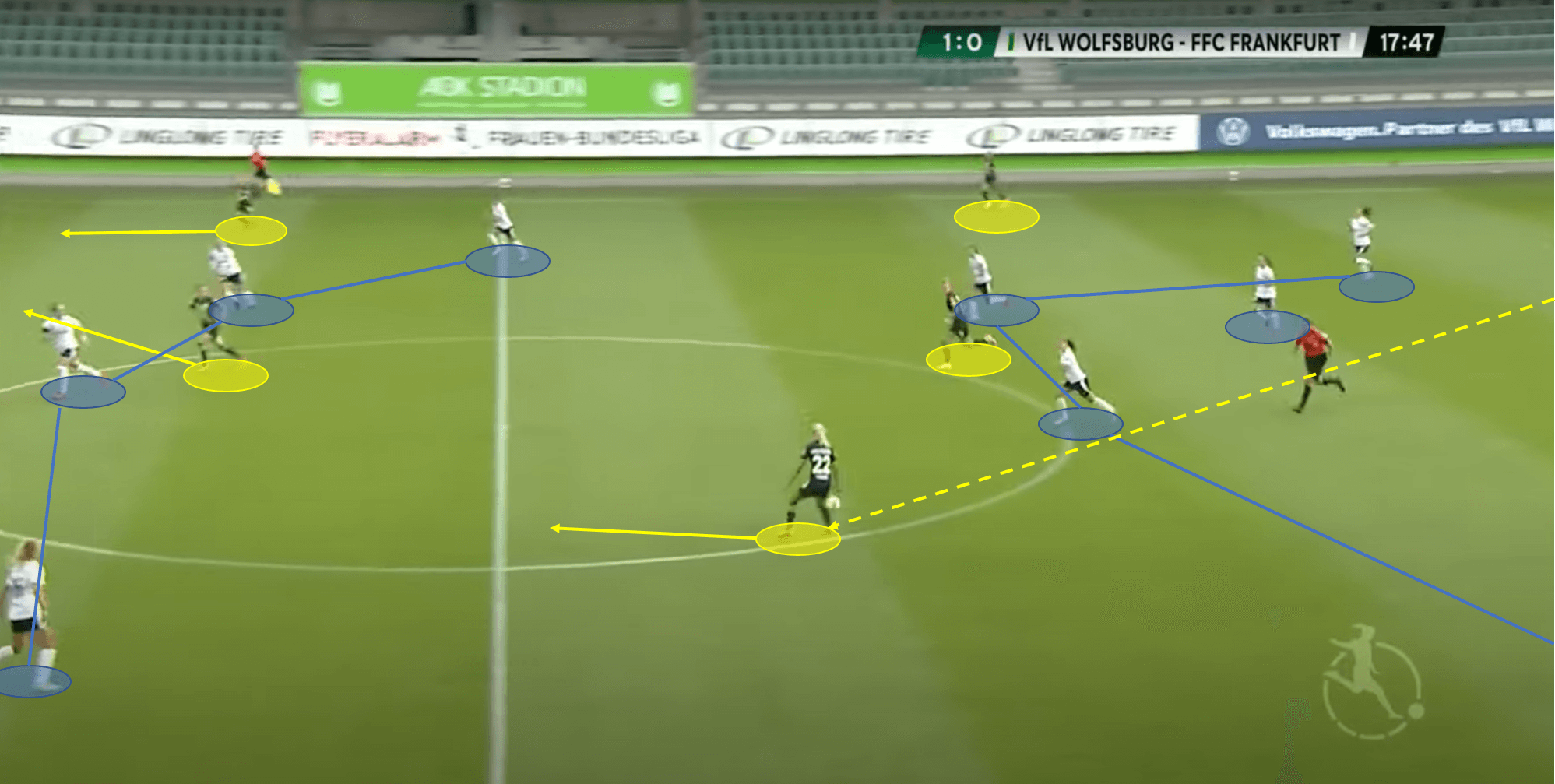 If Harder is ignored, she may penetrate forward with dangerous freedom. If a defender steps forward to pressure Harder, Harder has the technical ability to play a perilous through-ball into the space the defender just vacated.

This dilemma plagued Frankfurt throughout the match.

Wolfsburg were also effective in winning any attempt at direct play from the Frankfurt side. Wolfsburg employ an aggressive press, with 25% of their recoveries coming in the attacking third (first in Frauen Bundesliga). Teams that are unable to play through a press will often attempt to play over the press and win the first or second ball.

Wolfsburg were well prepared for a Frankfurt aerial onslaught.

Wolfsburg were able to do this through a few key tactics and individual techniques. Firstly, the player seeking to win a header typically positioned themselves behind the direct opposing player. This offers multiple advantages, mainly, that the player behind has a better view of the entire immediate situation. The player in front is at a severe disadvantage with the direct opponent on her blindside. Secondly, the player behind is able to more effectively use their arms to block out their direct opponent.

While an aerial 1v1 battle was occurring, the nearby Wolfsburg players were also quick to move into advantageous positions. As the ball travelled through the air, nearby players sought to align their shoulders/body orientation with where the ball was going to land. This movement paired with making sure that each player’s feet were set and ready for forward or lateral movement when the ball made first contact helped the Wolfsburg players to always be in control in the immediate area.

We can see a great example of this in the eleventh minute of the match. Both Wolfsburg players battling for the initial header have gained a positional advantage by getting behind their immediate opponent and pushing them forward.

We can also see that much like pressing, Wolfsburg players in the area have moved to mark and or eliminate a Frankfurt player in the area as a receiving option. As the ball makes first contact, all nearby Wolfsburg players are optimally oriented and positioned to win the second ball, no matter where it may bounce. 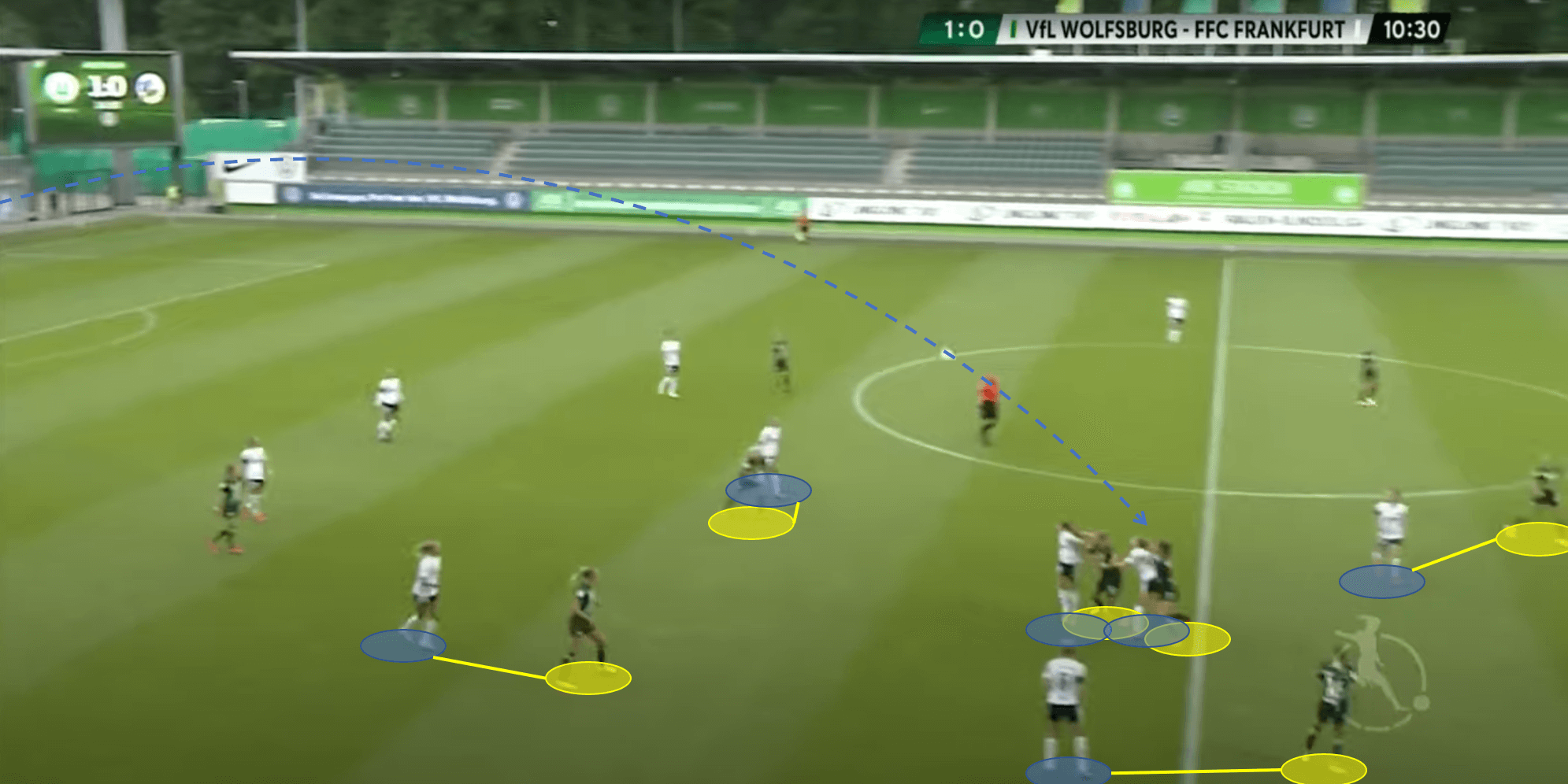 Below we have a better example of correct body position and setting of feet of nearby Wolfsburg players. Although Gunnarsdottir has been beaten in her individual aerial battle, all nearby Wolfsburg players are positioned to recover the ball nonetheless. Note that each player’s shoulders are lined up with the ball’s point of contact and that each player is ready to quickly move in any direction to win the ball.

Although this aerial tactic may seem a small part of the entire match, Wolfsburg domination in the air set a strong tone for how Frankfurt were able to play when in possession.

Overall, Frankfurt never held a firm grip on the match. Wolfsburg dictated all phases of the game and eventually walked off the field 5 – 1 winners. Wolfsburg move forward with substantial eight-point lead atop the Frauen Bundesliga table with four matches remaining. Frankfurt will see that although they have had a relatively successful campaign for the 2019/20 season, there is still a large gap that they must cross to reach the top.